With the 2020 Summer Olympics up ahead, sports are on everyone’s mind. Especially in light of the five new sports approved for this year’s games: baseball and softball, karate, surfing, skateboarding, and sport climbing. The latter three are classified as extreme sports. Dangerous as those sports may be, though, daredevils know that the world of sports holds a lot more exhilarating, and terrifying, possibilities than anything the Olympic Committee would ever approve. If you’re looking to start the new decade off with a bang, these are the seven scariest sports to watch, or try, this year. 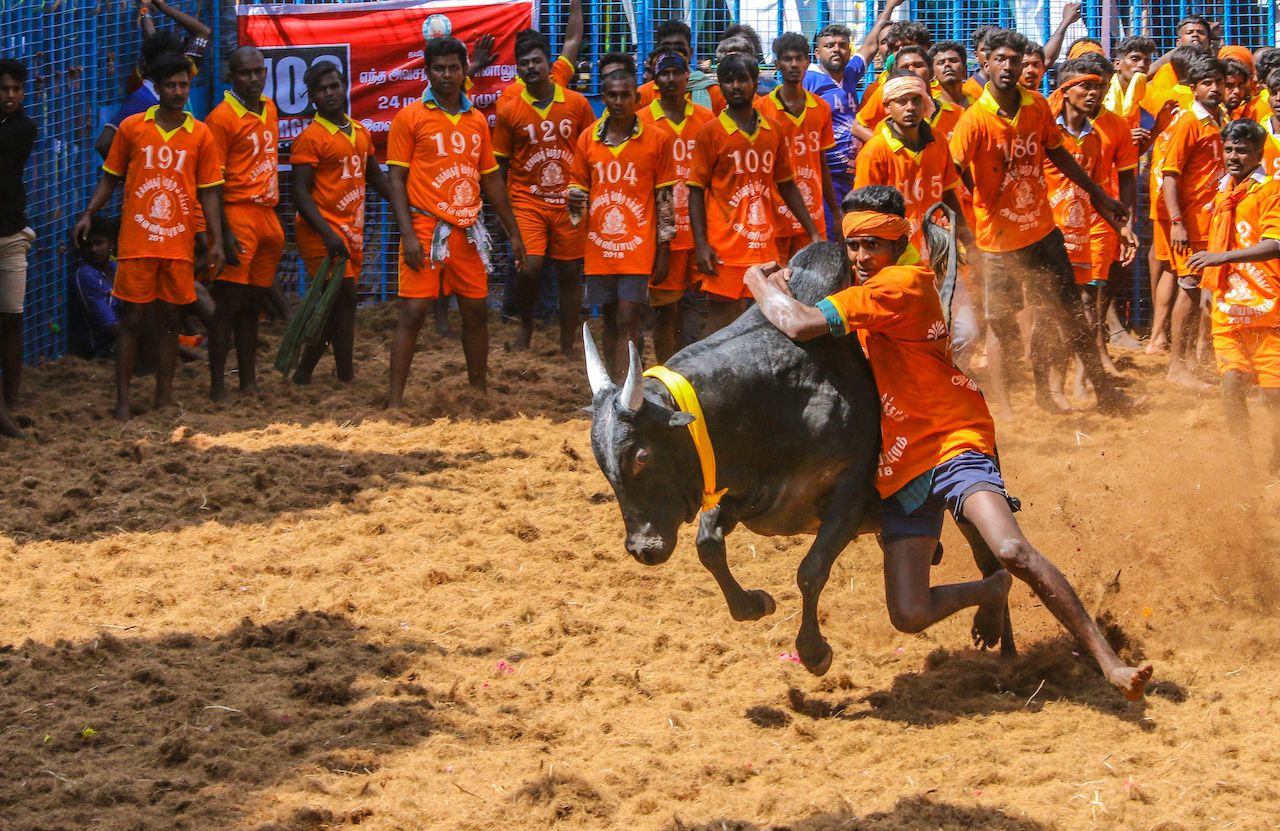 Running with the bulls in Pamplona, or perhaps in the Azores, is a bucket-lister for many thrillseekers. Fewer people plan trips around jallikattu, though. It’s a lesser-known custom from Tamil Nadu, India, that combines the best of bull running and bull riding. Traditionally, crowds surround a bucking beast as individuals take turns trying to hang from its hump while the bull tries to wriggle free. Part of the Hindu Pongal harvest festival, it’s a controversial sport that has resulted in a number of deaths, angered animal rights activists, and been banned more than once. Popular demand for the sport’s return saw the latest ban lifted in 2017, however. Pongal is celebrated for four days every mid-January, meaning the 2020 festivities are about to kick off with some seriously scary athleticism. 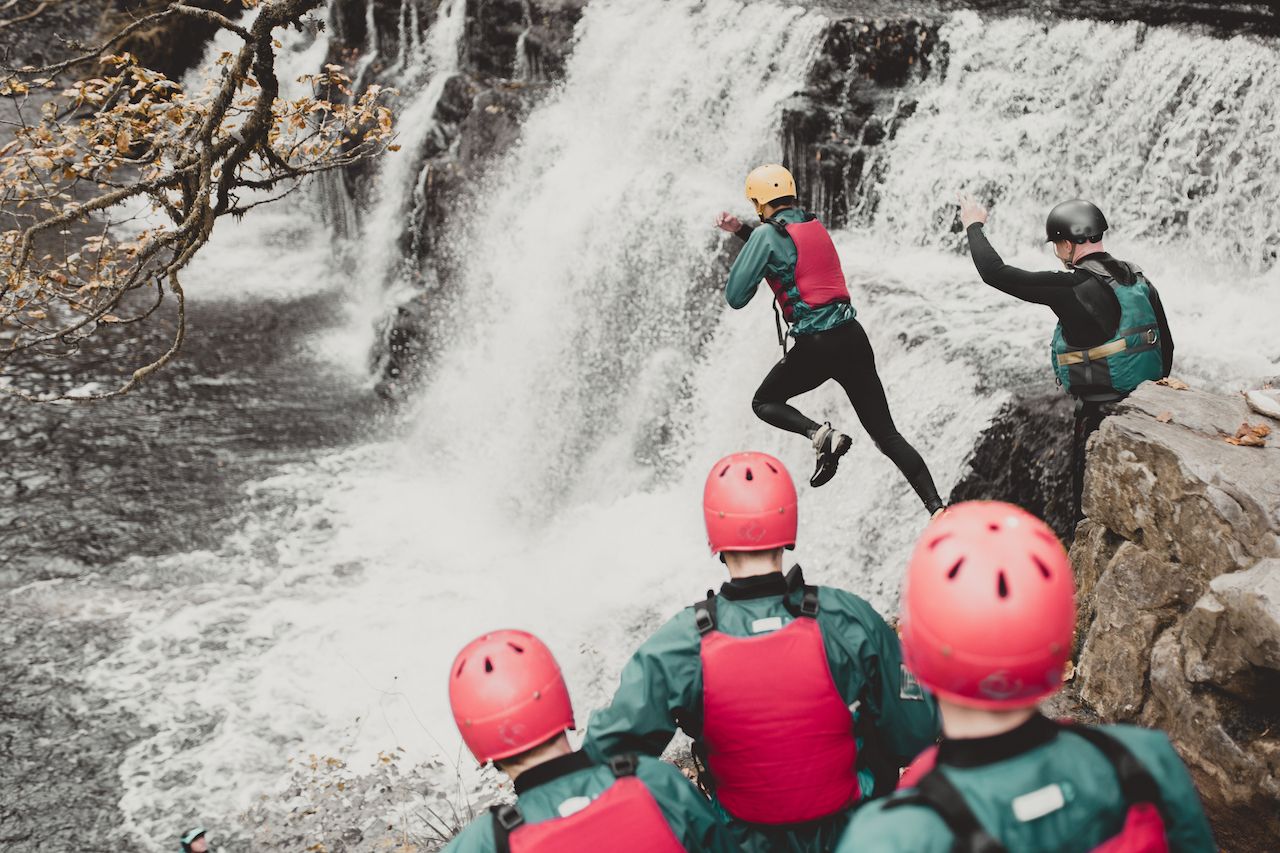 Many adventurers train for coasteering their entire lives, whether or not they realize. The action-packed sport combines activities like caving, bouldering, scrambling, cliff scaling and jumping, rock climbing, hiking, and, of course, swimming to navigate rugged intertidal zones. Perhaps the best place to try it on for size is Pembrokeshire, Wales, where it all began, though you’ll find no shortage of options in the UK, Ireland, Portugal, Greece, South Africa, Australia, and beyond. Coasteering doesn’t require any special training, and beginners are welcome, so long as they’re prepared for a thrill and some seriously sore muscles.

Though it’s unlikely to be added to the Olympic roster anytime soon, several adventure-based races and events have incorporated coasteering elements. In Australia, the Great Adventure Challenge traverses New South Wales, including almost a mile and a half dedicated to coasteering this October 17. Nelson, New Zealand, also puts on an annual Summer Challenge specifically for women, this year on March 21, daring teams of three to kayak, hike, mountain bike, and coasteer between three and 20 hours, depending on skill level. 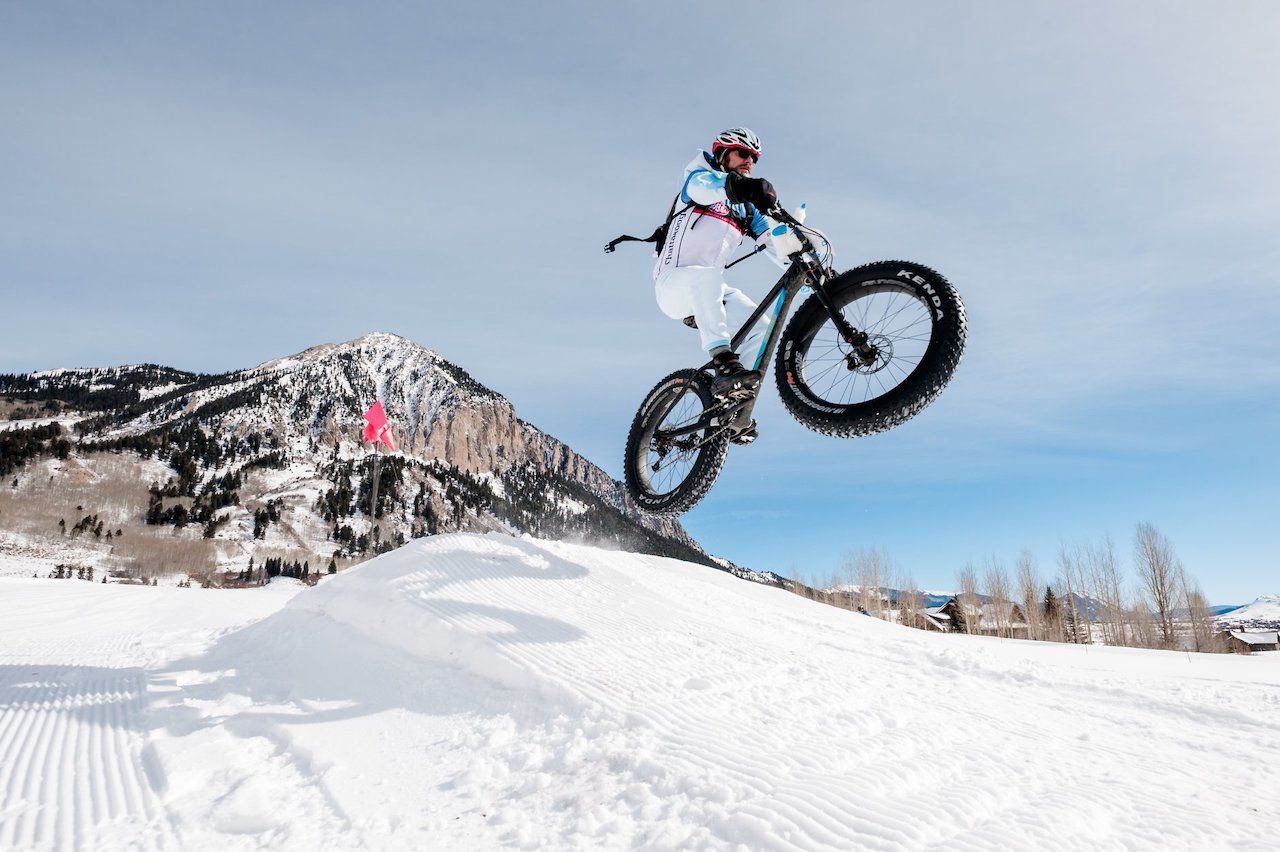 Downhill mountain biking elevates an already thrilling sport, literally, offering riders steeper tracks, greater speeds, and a variety of new obstacles. Fat biking grants riders access to even more challenging terrain, like snow and sand, due to its wide tires and low tire pressure. Join the two, and you’ve got one of the most heart-pounding activities you can do on two wheels.

Many of the best downhill fat biking trails are found in winter sports capitals like Park City, Utah; Cache Creek and Grand Targhee, Wyoming; and Crested Butte, Colorado, which hosts the annual Borealis Fat Bike World Championships, held January 24-26 in 2020. Elsewhere, you might try tearing up the singletrack in Dunedin, New Zealand, or speeding down Bolivia’s Death Road, possibly the gnarliest place in the world for good old-fashioned downhill mountain biking. For more information on fat biking, and fat biking events, check out the fat-bike website. While you’re at it, bookmark the International Cycling Union calendar for all downhill events, including the Swiss Snow Bike Festival scheduled for January 18 this year. 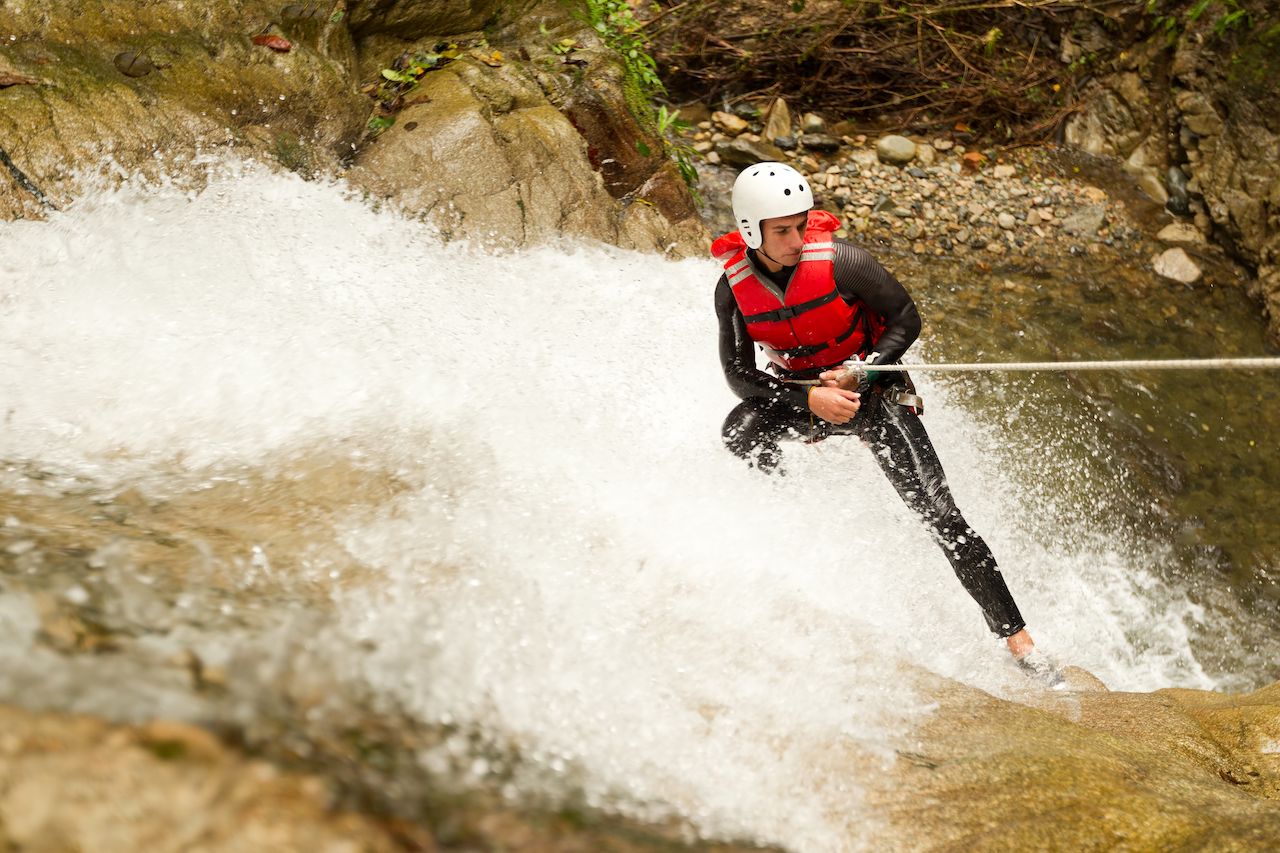 Canyoning, canyoneering…whatever you call it, this technical, challenging sport is an extremely good time. Like coasteering, canyoning melds hiking, rafting, climbing, abseiling, waterfall jumping, and any other method necessary to get from one end of a canyon to the other. It’s no picnic for anyone with a fear of heights, but the scenery is hard to beat. Just look at hot spots like Kawasan Falls in the Philippines, Zion National Park in Utah, Arenal Volcano in Costa Rica, and Antelope Canyon in Arizona. Recently, Cradle Mountain Canyons in Tasmania also claimed its must-explore status, opening its nearly 100-foot natural slides to canyoners.

Plan an epic excursion on October 5, 2020, for International Canyoning Day, or join a meet-up like the 2020 Arizona Canyon Rendezvous on April 15-20 or 2020 Darkhorse Zion Canyoneering Rendezvous on September 16-20. Ficanyon.org is an excellent resource for all things canyoning, whether you’re just starting out or on your way to becoming an expert. 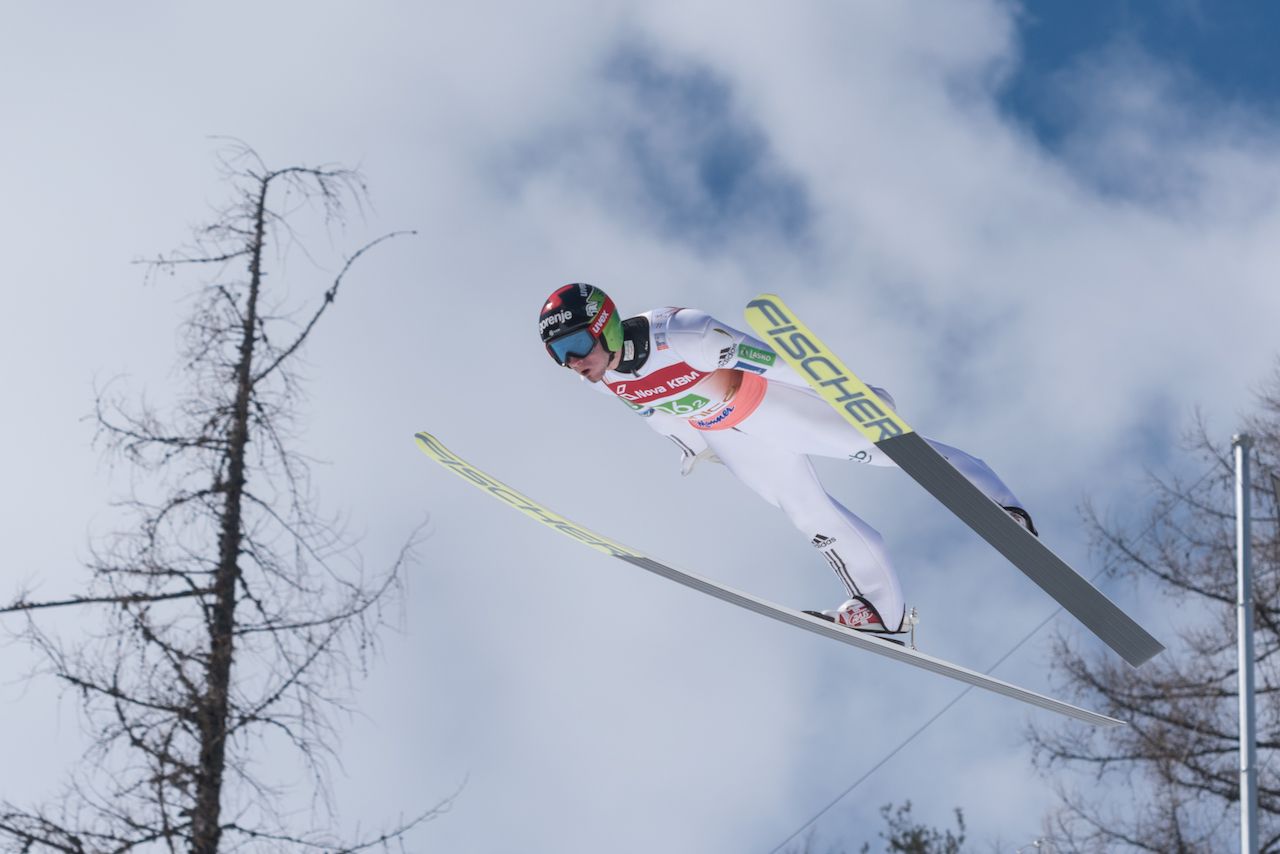 There’s no end to the audacious feats adrenaline junkies will attempt on skis. Joining the ranks of winter sports like heli-skiing, ski BASE jumping, and snow kiting, ski flying is yet another way to one-up the excitement of an alpine run, even if you exclusively ski double black diamonds. The concept is the same as ski jumping: skiers blast off from ramps and hurtle through the air to cover as much ground as possible before touching down on landing slopes. Where ski flying is concerned, the ramps are bigger, the distances longer, and the speeds greater, with fliers launching up to 70 miles per hour. Currently, Austrian ski jumper Stefan Kraft holds the record, having soared over 830 feet over the snowy ground on the ski flying hill in Vikersund, Norway. If you’re curious to witness the magic, or madness, check out the Ski Flying World Championships in Planica, Slovenia, on March 20-23, before trying it yourself. 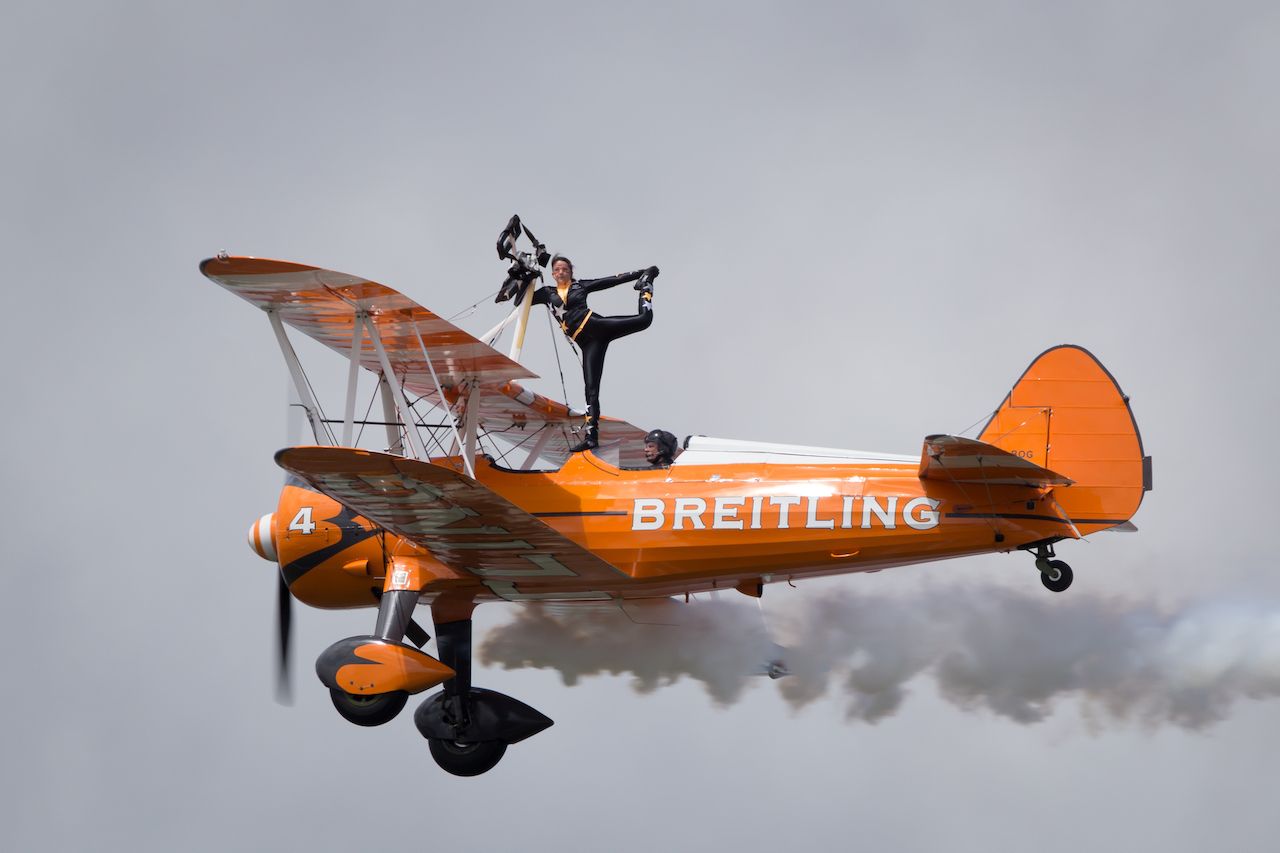 Flying can be scary in the face of turbulence, even when we’re strapped safely in our seats. Skydiving is next-level terrifying, but neither holds a candle to wing walking, which demands a lot more composure than simply not passing out midway through a freefall. The idea to walk about on the wings of a moving airplane dates back almost as far as the airplane itself. After World War I, out-of-work army pilots who had discovered their ability to make mechanical adjustments and man firearms while in flight began performing wing-walking tricks in flying circuses, later finding work as stuntmen in Hollywood films.

Today, almost anyone can become a wing walker. Contrary to what you might think, the sport isn’t reserved for decorated military members, career pilots, or professional daredevils. Companies like AeroSuperBatics Wingwalkers afford anyone interested in the ultimate thrill the opportunity to ascend into the sky strapped to the outside of a biplane. All it takes is an insulated jumpsuit and a whole lot of grit. After braving takeoff, wing walkers have to contend with the g-force as the plane throttles, climbs, dives, soars, and facilitates flypasts. 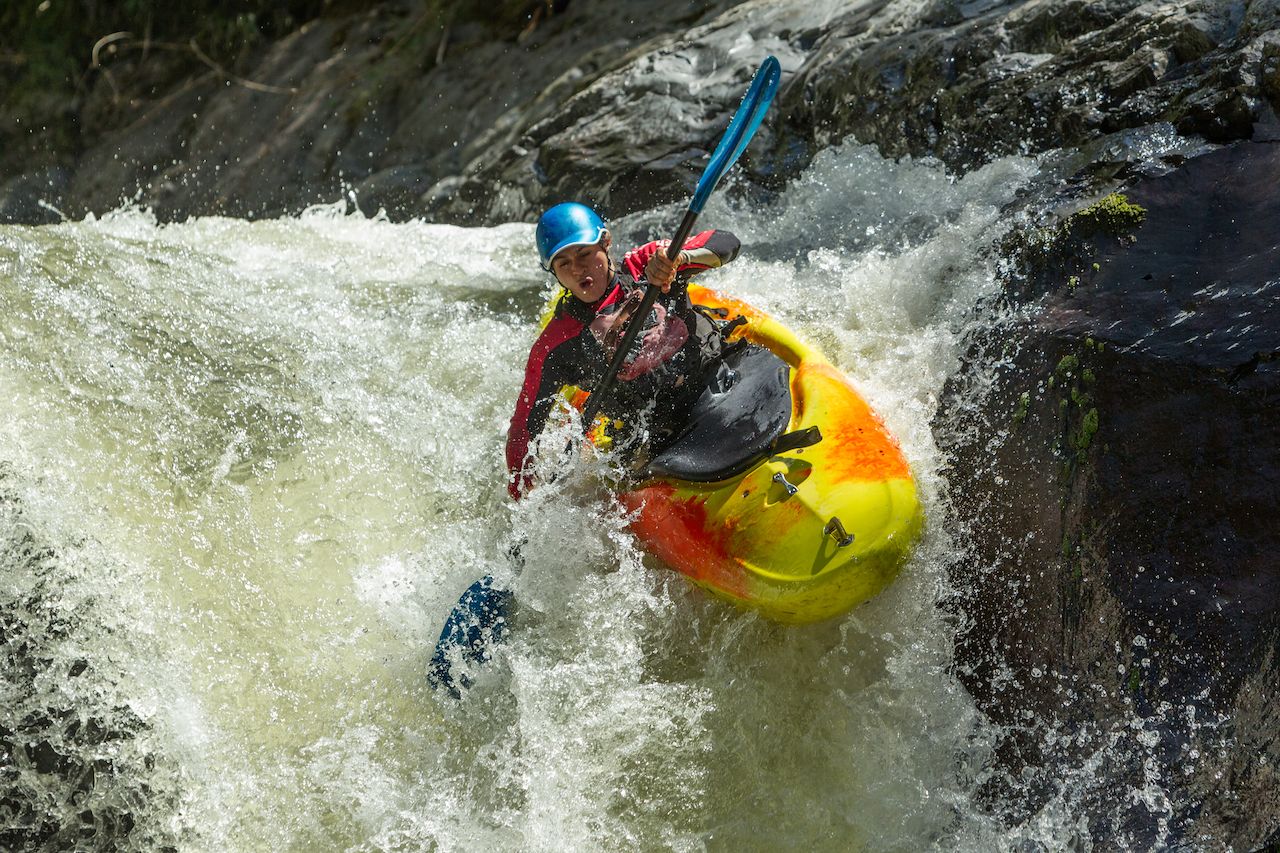 Of all the water bodies, creeks don’t exactly scream adventure. Paddle a canoe or kayak down low-volume, fast-moving rapids, however, and the already exciting sports get that much more extreme. Creekers boat down steep, tight, hard-to-maneuver waterways in vessels outfitted for the roughest of whitewater. It’s challenging even for experienced rafters, with some beginner courses requiring prospective creekers to be comfortable with Class III rapids before attempting it. The conditions can be fickle, with too little water proving problematic and too much proving dangerous as it could hide holes, sieves, undercuts, and other obstacles. California’s Cherry Creek, near Yosemite, and Washington’s Little White Salmon River are go-tos for intrepid rafters in the United States, with the Stein River in British Columbia serving as one of Canada’s top spots. As a rule, coastal mountain ranges offer the best creeking conditions in spring and fall.

Ski & Snow7 Water Sports You Can Still Do When the Temperature Drops Below Freezing
Tagged
Extreme Sports
What did you think of this story?
Meh
Good
Awesome