As a kid growing up in Seattle, Bellevue was kind of a punchline. Not that the mass of suburbia we collectively called the Eastside wasn’t a nice place — it’s home to Microsoft and, at the time, had more designer shopping than Seattle. But it was the boujee, gas-guzzling, expensive-shopping antithesis to grungy, vintage-chic Seattle. It was a generic home of fancy things with no soul and nothing to do that we only visited for back-to-school shopping and lunch at the Cheesecake Factory.

And outside of Seattle, nobody had heard of the place.

But as Seattle morphed into a tech-fueled mega-city, its neighbor to the east began to forge its own identity. The Eastside became the less-crowded jumping off point for the best things about the state of Washington: wilderness, beer, creative food, and outdoor recreation. Leveraging its location between one of the top wine-tasting destinations in America and some of the most spectacular scenery in the world, Bellevue has become almost as worth visiting as its big brother to the west.

A designer hotel marks the arrival of a destination. 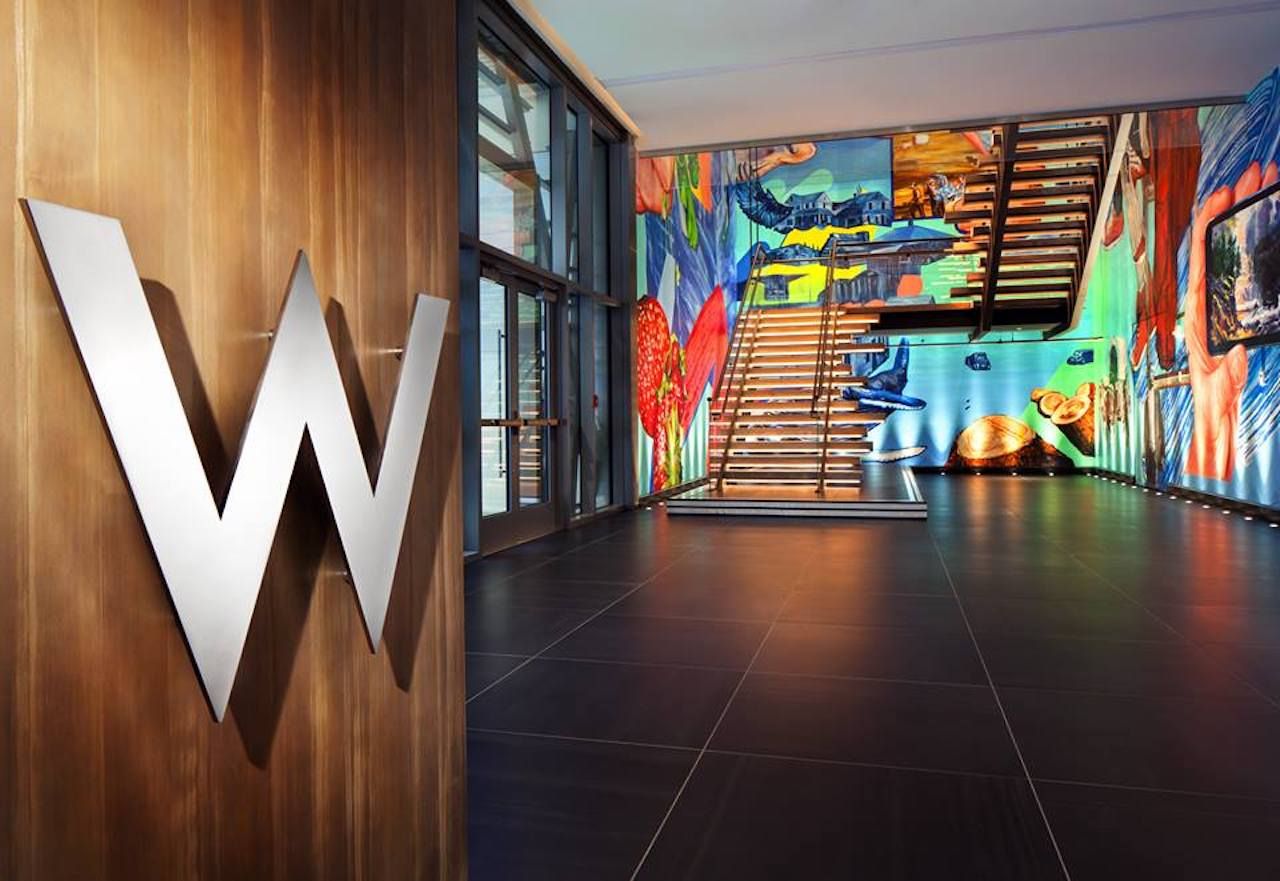 Bellevue has a W. People in Seattle don’t even know Bellevue has a W, but if there’s a sign that the city has grown out of its bedroom-community reputation, that’s it. Because you don’t get the same hotels as Dubai and Barcelona when all you have to offer is a mall.

The W’s designers knew exactly what the city offered when developing the hotel’s theme. It has the feel of a wealthy, stylish relative’s summer lake house, done up in light woods with big windows and a stacked bar. It interprets the Eastside as a place of modern luxury, with easy access to the outdoors and fine wine. Like Napa with mountains — and a bigger skyline.

“As an Eastside girl who grew up here, everybody thought of this as the uncool place to hang out, but you’ve gotta look at it in a different way,” Julia Amodt, the W’s resident Insider, told me as we sipped cocktails on hanging chairs, gazing out at Bellevue’s modern skyline from the Living Room. In my hand was a spicy pineapple margarita made with Patron and habanero agave, the kind of drink nobody saw in Bellevue a decade ago but is endemic in W’s cocktail bars. “This is the kind of location you go to if you want to go paddleboarding or hiking or kayaking one day, then come back and maybe get a massage at the spa and eat dinner, then go wine tasting the next.”

As we watched the sun go down over Bellevue’s skyline — dwarfed by Seattle’s but stunningly similar to skylines in Phoenix or San Jose — she explained how her job involves crafting custom itineraries full of stuff like picnics at private beaches and private brewery tours. She also arranges exclusive wine tastings at Chateau Ste Michelle and tasting dinners at the W’s Lakehouse restaurant, helmed by James Beard Award Winner Jason Wilson. “People think there’s nothing to do on the Eastside, but there is — if you have a relaxed attitude and know how to find the hidden gems.”

“I like pushing the boundaries of what people think Bellevue is,” she continued, looking at the sun reflecting off the copper-mirrored skyscraper in front of us. “You can’t make a comparison between us and Seattle. Here you can be so much closer to the outdoors, to wine tasting. It’s not as busy as Seattle. There’s great nightlife over there, but this is just such a relaxing vacation.”

A Northwest wilderness vacation — with amenities. 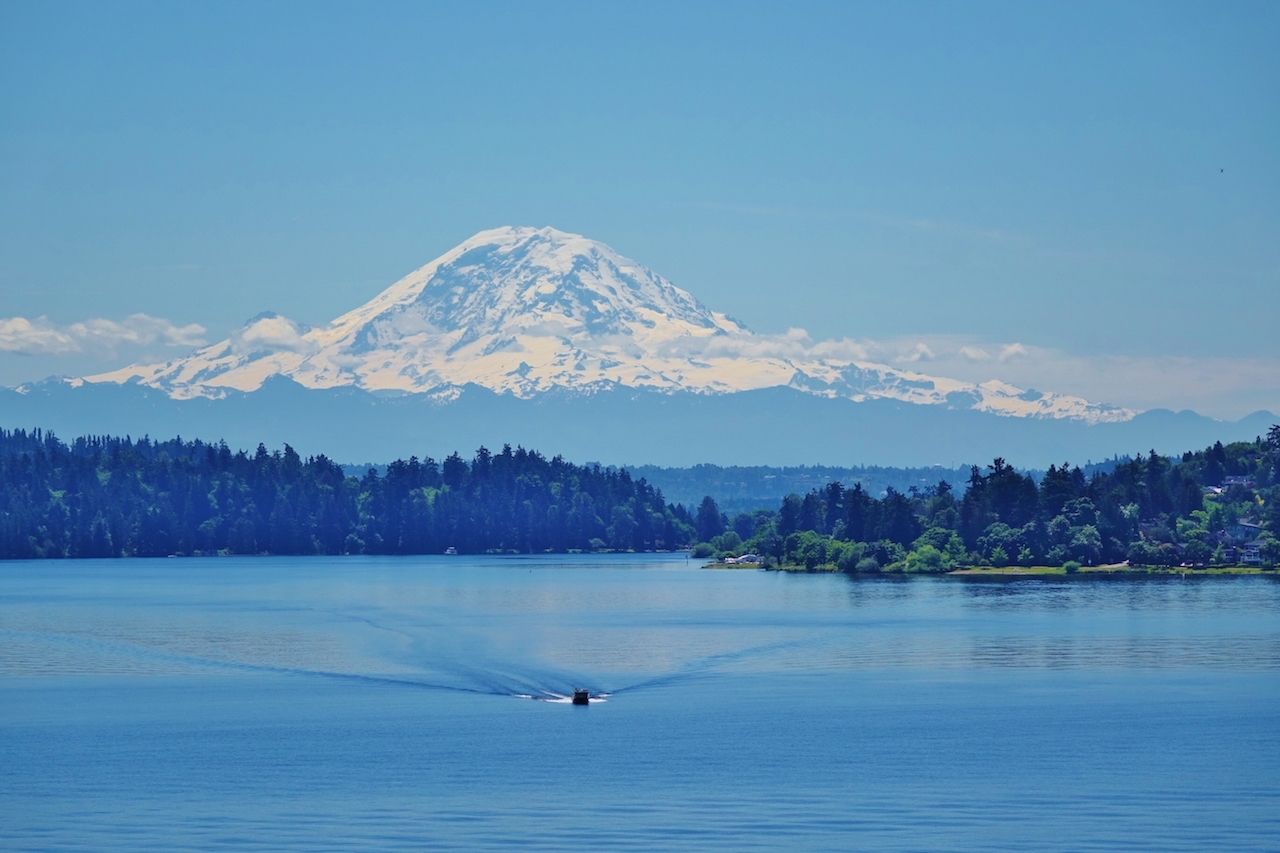 Relaxing was the perfect word for how I felt after climbing to the top of giggle-inducing Poo Poo Point, a seven-mile round-trip hike about 10 minutes from the W. The hike starts in the quaint northwestern town of Issaquah, winding up through evergreen trees for nearly three miles with intermittent views over emerald mountains and Lake Sammamish. The hot August afternoon didn’t feel so harsh with a soft, cool breeze blowing across the mountaintop. Hang gliders pushed off from a launchpad not far from the summit, a perfect northwest scene with the Bellevue skyline a short way in the distance.

The hike is but one of many in an area where hikes through dense forests leading to sweeping views are commonplace. There’s Rattlesnake Ledge about halfway back towards downtown Bellevue, a four-mile hike that winds through the mountains with views of Cedar River watershed; Mount Si; Mount Washington; Rattlesnake Lake; and Chester Morse Lake. Between Lake Sammamish State Park, Tiger Mountain State Forest, and Cougar Mountain Regional Wildland Park, the area offers so many hikes even Seattle lifers haven’t tried them all.

For slightly less-strenuous outdoor adventures, paddleboarding and kayaking on Lake Sammamish or Lake Washington are peaceful ways to take in the mountains. When the weather is nice — more often these days in western Washington — you can kayak under blue skies and canopies of fir trees as hawks soar overhead. Rent from Cascade Canoe & Kayak on Lake Washington or Issaquah Paddle Sports on Lake Sammamish. 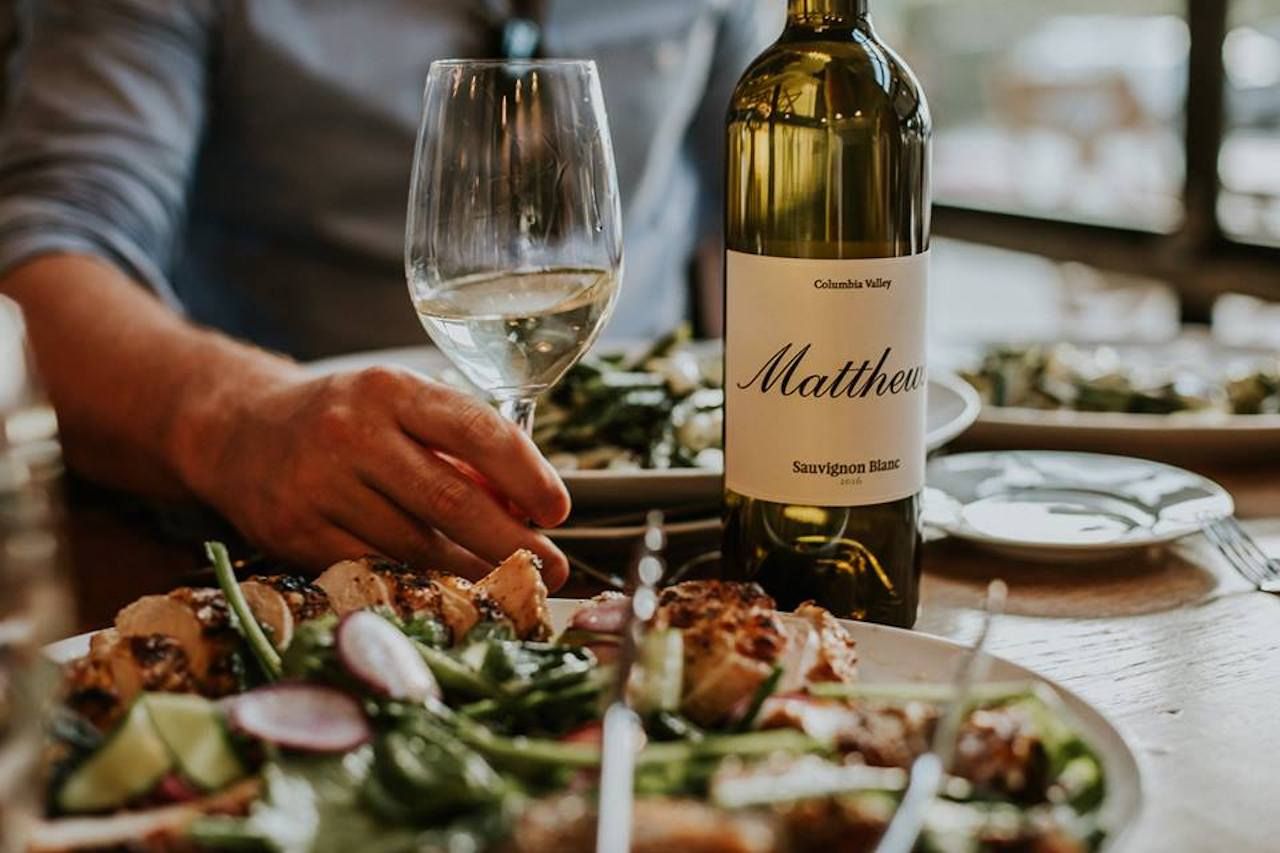 A 10-minute drive north of downtown Bellevue puts you smack in the middle of Washington Wine Country. Sort of. Cruise up to the small town of Woodinville — a $13 Uber ride — and you’d think its reputation as a wine-tasting destination was a complete fabrication.

“The only vines you see here are purely ornamental,” says Diane Otis, owner of Matthew’s Winery in Woodinville. “It’s made to look like it’s wine country. Our reputation has nothing to do with the quality of the grapes here.”

The reputation stems from the 120 Washington State wineries that have tasting rooms in Woodinville. That’s because Washington’s wine country is mostly based in Walla Walla — about a four-hour drive from Seattle. But as Washington law allows wineries to have up to four tasting rooms anywhere in the state, many have chosen to set up shop in Woodinville, making it the densest concentration of wine tasting rooms in America. You can taste more small-vintage wines from tiny winemakers in a day than you can in famed locales like Napa Valley or Sonoma.

Chateau Ste. Michelle led the charge to Woodinville in the 1990s when the Washington State wine heavyweight set up a satellite winery here, complete with its trademark concert venue. Columbia Crest, the state’s other mega-winery, followed suit shortly after.

“That just caused a lot of wineries to jumpstart their operations here,” says Otis, whose winery opened in the 1990s under different ownership. “If you want to come do wine tasting, you can fly to Seattle and drive all the way to Walla Walla, or you can just come to Woodinville.”

“It also created an environment where up-and-coming, out-of-their-garage winemakers have started,” she continued from her hillside tasting room. “You put fruit together with winemakers with incredible passion, and you get what we have here.”

The city is also home to breweries like 20 Corners, Triplehorn, and Sumerian Brewing Company, as well as distilleries like Woodinville Whiskey — recently acquired by Moet Hennessy but still just as fun a place to kill an afternoon. If you still wanna support the little guy, hit J.P. Trodden in a little garage space in an office park. You won’t spend a ton of time there, but it’s the best whiskey in the region. Woodinville has a concentration of local alcohol makers you wouldn’t even find in travel-darling cities like Asheville or Boulder.

A home for James Beard winners and renowned Seattle restaurants. 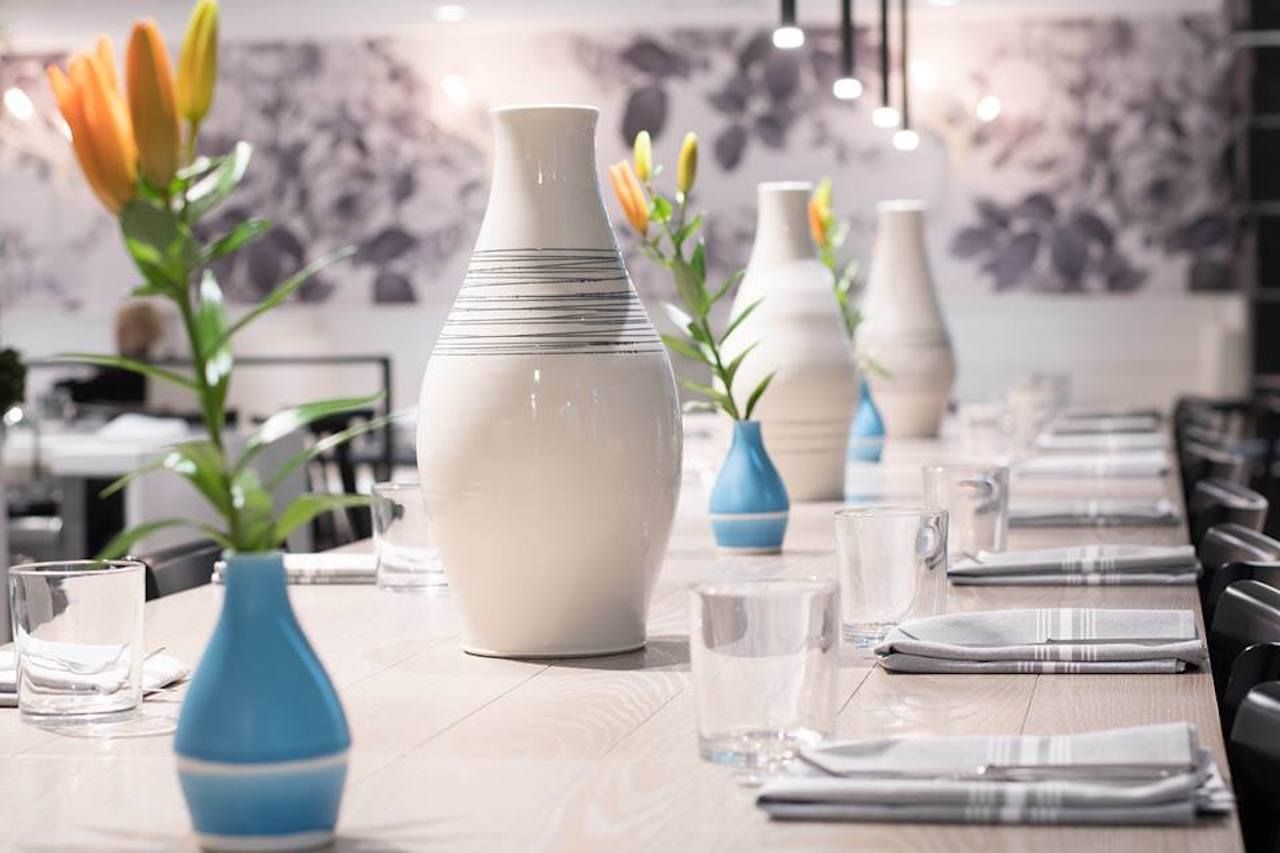 Food on the Eastside has grown up, too. The most obvious sign is Lakehouse, the W’s restaurant helmed by James Beard Award winner Jason Wilson. The place continues the hotel’s theme of beach vacation house with high ceilings, long tables, and lots of energy. The boisterous space is filled with plates made from local farms, highlighted by the Yakima slow-braised short rib with bleu cheese and local Cabernet sauce, and curry-roasted cauliflower with green apple and kale pesto. It’s not just a fancy restaurant in an expensive hotel in a swanky suburb. It’s the kind of creative, local food one expects in giant cities like Seattle. So there’s no need to cross the bridge to get first-rate cuisine on your relaxing getaway.

Top Seattle restaurants are hip to Bellevue’s emergence, too. Monsoon, a white-hot Asian-fusion restaurant in Capitol Hill recently opened up shop in Downtown Bellevue. The food here is the kind of innovative Asian cuisine one expects when visiting the northwest, with dishes like lemongrass pork shoulder rice bowls and caramelized Idaho catfish clay pots with sweet onions leading a small-plate-heavy menu that is ideal for tourists looking to sample the local fare. And again, it’s big-city stuff in a smaller, less hectic environment.

Bellevue may not be Seattle, but it very much is Washington. If wilderness, wine, beer, and great food is your vacation MO, Seattle’s Eastside might be the West’s most underrated destination. Once a suburban afterthought, this area has blossomed into a jumping off point that represents everything great about the state. And it almost makes us feel silly for mocking it 20 years ago.

I traveled to South Africa during Omicron. This is what it was like.
The 11 most stunning indoor hotel pools around the world
The most scenic and luxurious train rides in the world, according to the Man in Seat 61
11 of the deadliest concert disasters in recent history
The 22 places you need to travel in 2022

On your next Pacific Northwest road trip, base yourself in Seattle Southside