“They say sex work is not normal,” Mary told me on Matador Network’s No Blackout Dates podcast, sounding both perplexed and disheartened. “But who decides what is normal?”

This tug-of-war between what’s normal and what isn’t characterizes some of the most important debates of our time. The “normal” is tolerated and encouraged, while the “abnormal” is outlawed and its practitioners shamed. In Amsterdam, famous for its positivity and liberalism, prostitution is slipping into the “abnormal.”

Mary has worked as an escort in Amsterdam for eight years. To her, sex work is a profession like any other, and the Red Light District is the most infamous of offices. Now that office is being uprooted from its historic home to be moved outside of the city center, all under the pretext of shielding the women from the ill-effects of over-tourism.

Femke Halsema, Amsterdam’s mayor, put forward a proposal earlier this year to shut down a significant number of Red Light District windows around the docks — a proposal backed by several political parties. Sex workers would be forced to relocate to a purpose-built center elsewhere in the city. Halsema told The Guardian that the brothel windows should be closed to protect the women from “gawking tourists” who verbally abuse sex workers and treat them like tourist attractions. Sex trafficking and over-tourism were also cited as concerns.

Moving the Red Light District outside of the city center, as well as banning cannabis for foreigners, might sound like it addresses safety concerns and the city’s over-tourism problem, but the reality is much more complicated.

Sex work is part of the neighborhood

Sex work has always been a victim of image and perception. A neighborhood widely known as a city’s epicenter of prostitution might sound disreputable, but in Amsterdam, the Red Light District is a neighborhood like any other.

Prostitution in Amsterdam dates back to at least the 15th century, and the modern Red Light District is in the oldest section of the city. It’s something that residents have grown up knowing.

“I was born and raised in Amsterdam,” Mary says. “You always knew about the Red Light District and saw the ladies in the windows. Even as a small child, you got used to it. We asked our mom, ‘What are they doing?’ And she said, ‘Well for gentlemen who don’t have girlfriends, sometimes they want to kiss and cuddle with a girl, so they can give one of the girls some money, and they can kiss and cuddle with them.’ And we thought, ‘Oh, what a funny profession.’”

The reason a child can walk through the Red Light District unfazed isn’t because children are ignorant, Mary says. It’s because they haven’t yet been trained in the adult art of judging others.

“As a child, you’re not subject to moral judgment,” Mary says. “It was only when I started instructing tourists about the Red Light District that I realized that to some people it’s not as normal as it was to me.”

Despite the current relocation attempt, Amsterdam is still far more tolerant and open-minded toward sex workers than much of the world. Several sex worker windows are located opposite a church, and others are next to children’s daycare centers in a residential area — and few seem to care.

“That’s what makes it kind of special,” Mary says. 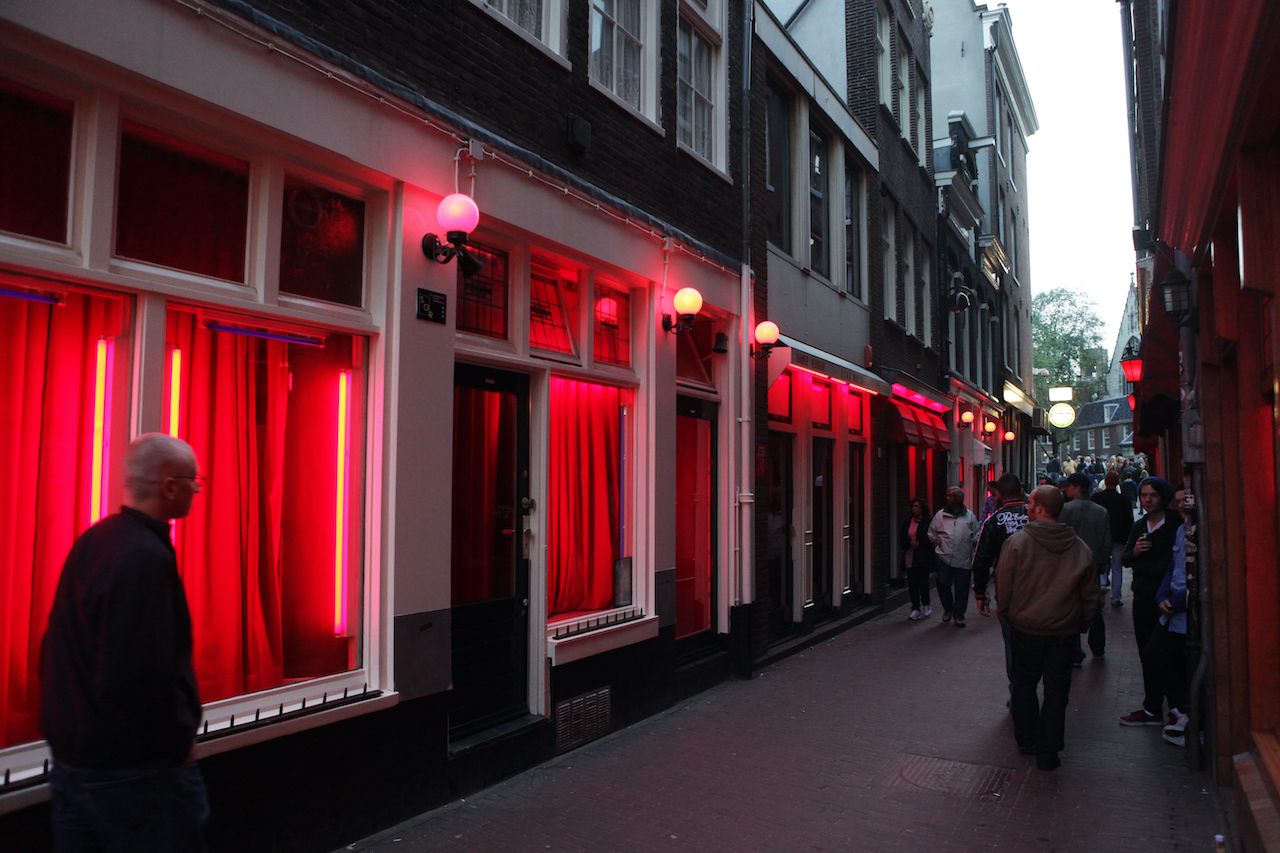 Constantly warring against its own stigma, sex work often calls to mind desperation rather than entrepreneurship, and the women tend to be viewed as helpless and fragile. In Amsterdam, that couldn’t be further from the truth.

Compared to US underground services or prostitutes for hire, Mary says, “Window work is the safest and most independent way to work, because you can select your clients. And if you have trouble, you can call the police, and the police will help you instead of arresting you and raping you, which is very common in countries where it’s illegal.”

A 2018 study that looked at sex work from 130 studies in 33 countries found that sex workers in places where it’s illegal were three times more likely to experience sexual or physical violence. Those in places where sex work is legal or tolerated were half as likely to have sexually transmitted diseases.

Not only can sex workers feel confident that law enforcement will actually protect them in Amsterdam, neighborhoods like the Red Light District also afford sex workers a sense of safety through community.

“The women don’t want to leave,” Mary says. “They love that area because it’s very compact and busy, and that means you’re safe even if you leave your shift at 4:00 or 5:00 AM. There’s always people around, we all know each other, there’s a lot of police cameras. It’s very safe.”

Yet another pillar of the safety conversation is, of course, safe sex. There tends to be a misconception is that sex in the Red Light District is unprotected and that the sex workers must be riddled with STDs. Again, this couldn’t be further from the truth. Sex workers always use condoms, and Mary says they put them on themselves “so we know it’s done right.”

Sex workers even have their own dedicated health care locations to prevent the spread of STDs, Mary explains, and the checkups are free of charge and anonymous. Treatment is also free. The result? Visiting a sex worker is safer than going home with someone from the nightclub because, as Mary notes, STDs among female sex workers are lower than the national average.

Movies, media, and public perception often suggest that prostitution exists to satisfy the salacious desires of a sleazy clientele, and they make it easier for men to cheat on their wives. In reality, many clients are simply men who lack intimacy in their lives.

“I was a nurse for many years and realized during my work that people may have handicaps or disabilities, but need intimacy and sex just like anyone else,” Mary says. “As a nurse, you really can’t do anything for them. I felt sorry for them, and when I read about agencies that mediate between clients and sex assistants, I thought, ‘Wow that’s the job for me.’”

Just as sex workers themselves are judged for their profession, clients are also shamed. But people rarely consider the other side of sex work. Mary’s clients, for example, are mostly those with mental or physical disabilities. Her oldest is 95 years old.

Destigmatizing clients is just as important as destigmatizing sex workers themselves, especially in places where the profession is under attack. For many men, seeking out a sex worker isn’t a shady escape from wholesome family life. Whether due to age or a disability, Mary’s clients rely on sex work for the human connection they can’t find elsewhere. 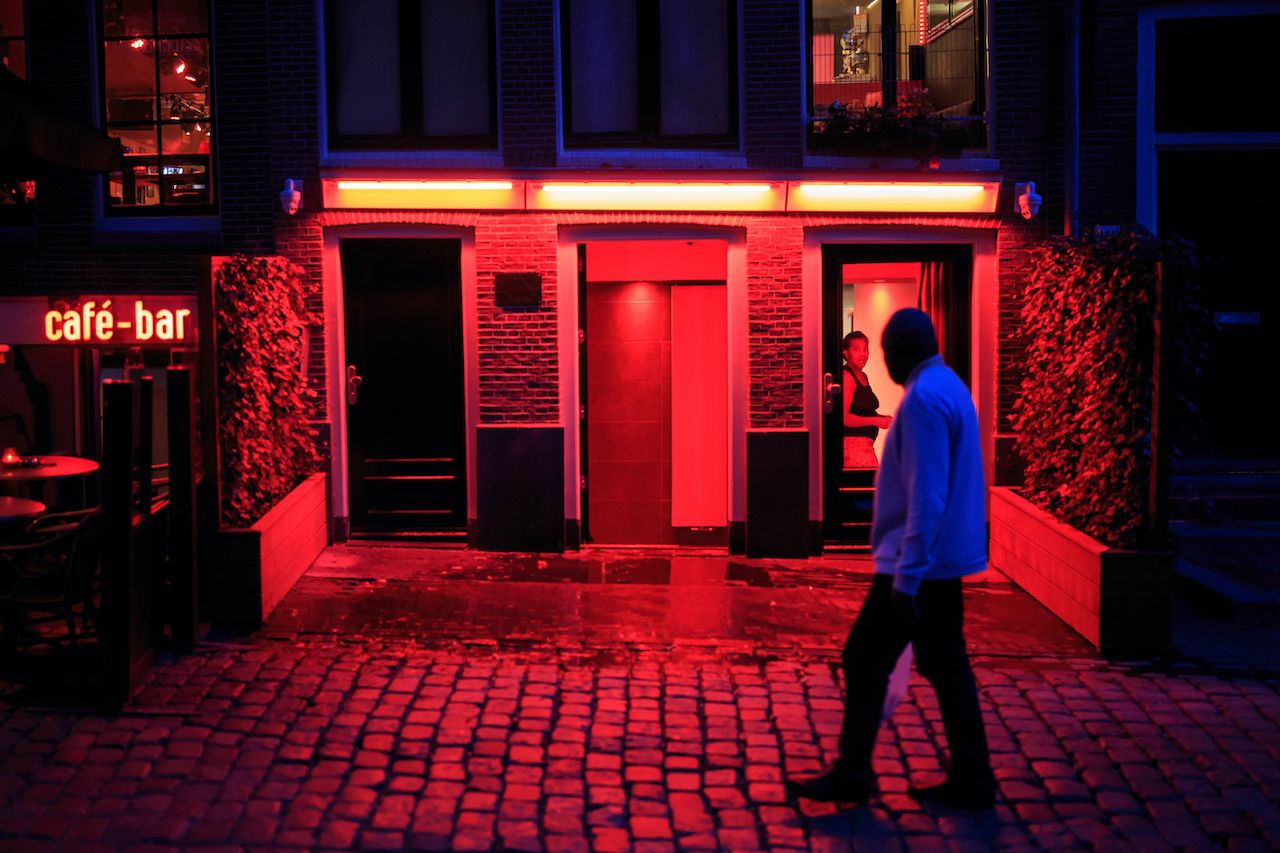 The story of sex work has always been intertwined with a narrative of persecution and marginalization. Even Amsterdam sex workers aren’t exempt from this. The downside of working in a misunderstood profession is that people, well, don’t understand it, and that lack of understanding can, unfortunately, translate into official policy. Governments, activist groups, and religious organizations in Amsterdam are presuming to know what’s best for sex workers and how to keep them safe without actually asking them.

According to Mary, the biggest threat to the sex industry in Amsterdam is politicians and religious organizations, who have made it their mission to stamp out sex work in the guise of fighting human trafficking.

“Human trafficking does exist,” Mary acknowledges, “but it exists in many other industries as well which you never hear about. Between 80 and 90 percent of sex workers in Amsterdam are doing it of their own free will, because they like it and because they can make good money. Though many might not believe it, the vast majority of sex workers in Amsterdam choose the profession willingly. That hasn’t stopped agenda-driven organizations from presuming to understand their motivations, and trying to make it harder for them to work.”

“One of the Christian political parties passed a law saying all sex workers must be registered in a national database,” Mary says, “and that’s against the law of privacy. They say it’s to fight human trafficking, but it’s really to make it as hard as possible for sex workers to do their job. Funny enough, one of my colleagues always says that the Christians are her best customers.”

One activist group even proposed that sex work clients should be criminalized. That proposal was rejected, but it points to the deep lack of understanding and compassion that courses through the anti-sex work movement.

“What about people with special needs?” Mary says. “They must often rely on professionals to meet their intimacy needs. But the politicians and religious groups never think about that side of the industry.” 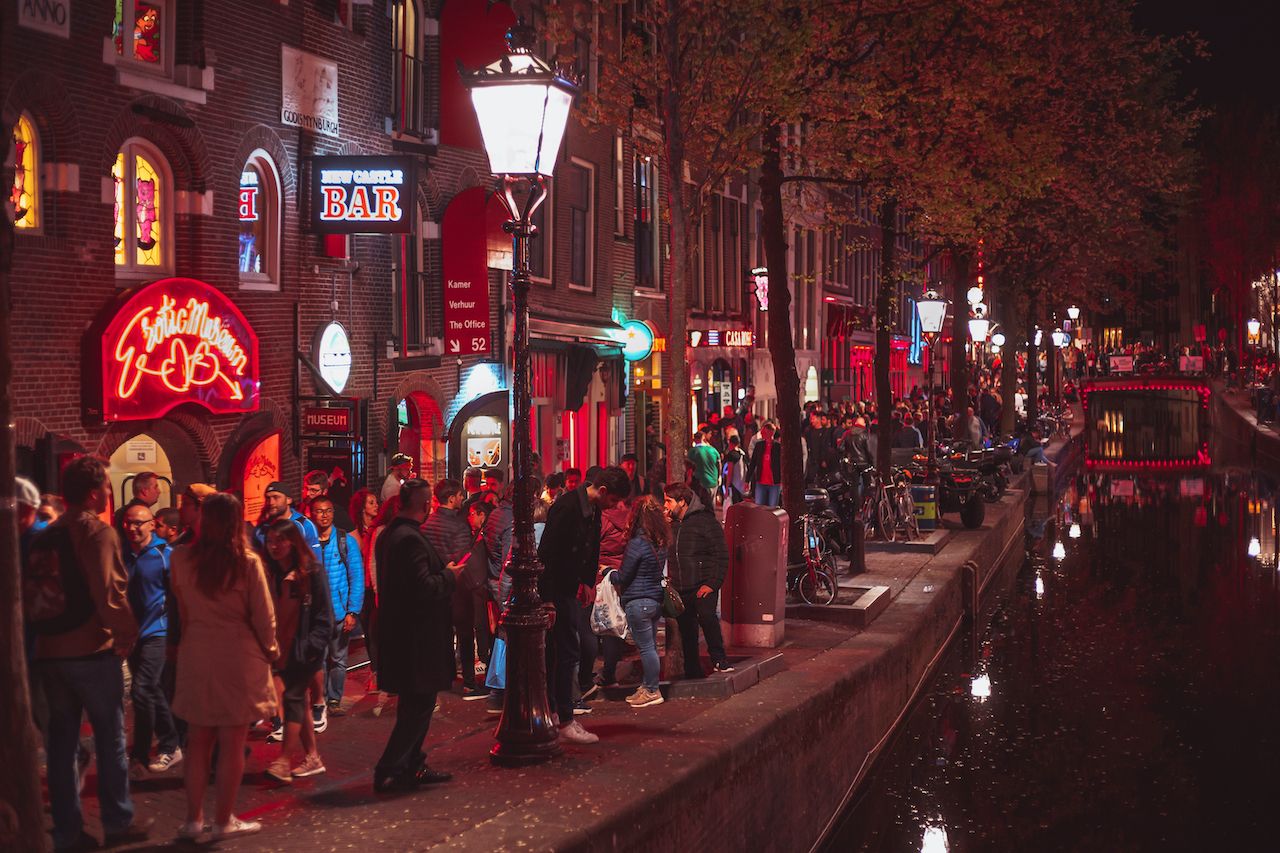 Overtourism is another pretext being cited for moving Amsterdam’s Red Light District. The city is famous for legal prostitution and also suffers from over-tourism. Therefore, one line of thinking goes, the two must be linked. It’s a convenient “correlation equals causation” argument made by conservative politicians and religious groups looking for an excuse to whisk prostitution out of the public eye.

“They think the sex workers bring too much tourism, and we get the blame for it,” Mary says. “However, the city did an inquiry a few years ago and asked if people would still visit the Red Light District neighborhood if there were no prostitutes. Only 5 percent said no they would not, meaning 95 percent would still visit even without sex workers. It’s an entertainment area — there are lots of cafes and restaurants — and that’s what attracts the people.”

The relocation of the Red Light District is just one tactical maneuver in the battle of “normal” vs. “abnormal.” Yet prostitution is not only an inextricable part of Amsterdam’s fabric; it’s also a valuable service essential for those struggling to satisfy their intimacy needs, as well as a safe alternative to the underground sex industries that pervade other countries. That sounds pretty normal to me.

CultureWhat You Should and Shouldn’t Do in Amsterdam’s Red-Light District
Tagged
Couples
What did you think of this story?
Meh
Good
Awesome