After spending five unexpected hours waiting for a rental car in Asheville, North Carolina, and another two hours driving to the mountain town of Highlands, even the dusky outline of the lawn-style courtyard at the Skyline Lodge was a comforting sight. A golden glow radiated from the lodge’s Oak Steakhouse straight ahead, lending warmth to the crisp evening air. We’d finally made it to our weekend retreat in the Appalachians. 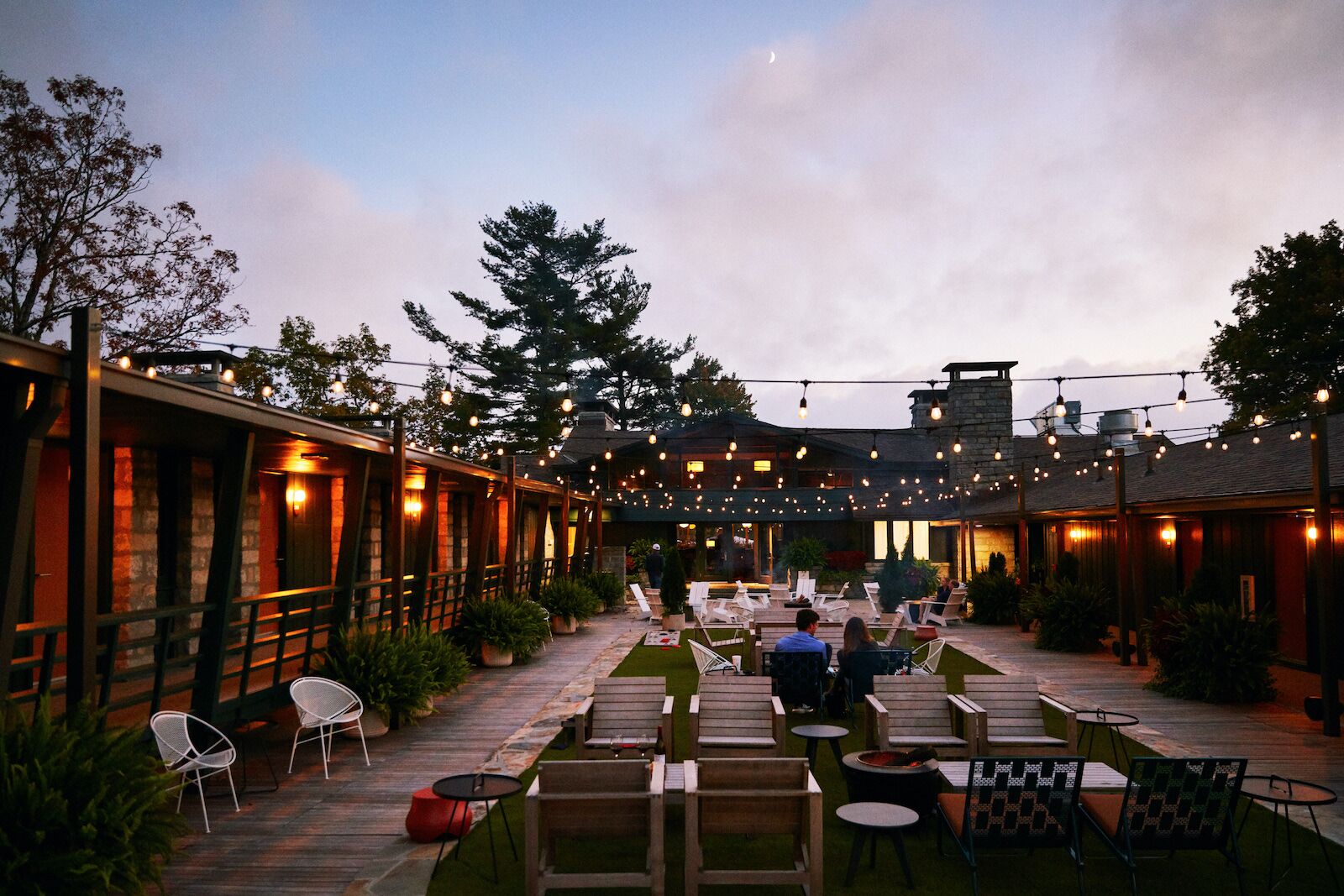 My partner and I flew in from California, but Highlands is better known among weekenders from western North Carolina and nearby cities across the Georgia and South Carolina borders. (Atlanta is just 2.5 hours southeast by car.) The Highlands-Cashiers Plateau is a magnet for outdoorsy folks who come to chase waterfalls in Nantahala National Forest, the largest national forest in the state and part of one of the only temperate rainforest systems in North America.

Skyline Lodge perches above downtown Highlands, which at over 4,000 feet of elevation is among the highest incorporated towns east of the Mississippi River. Despite its proximity to picture-perfect Main Street, the lodge feels far removed from any population center — and it’s fully aware that its remoteness is one of its biggest draws.

On the desk in every room, there’s a postcard depicting an aerial shot of the property ensconced in the surrounding wilderness. The words “I was here” are stamped across the treetops with an arrow pointing to the lodge, the only structure visible among the dense greenery. Beside the bed, outlets and USB ports are hidden beneath the nightstand, accompanied by a note explaining that the tabletop was kept clear “to make room for your journal and a copy of Thoreau.” A similar message printed on the backside of the Skyline Lodge sign directing drivers to the front entrance bids guests a friendly farewell as they exit the property. “Thanks for visiting!” It reads. “We’ll keep the fire going for you.” 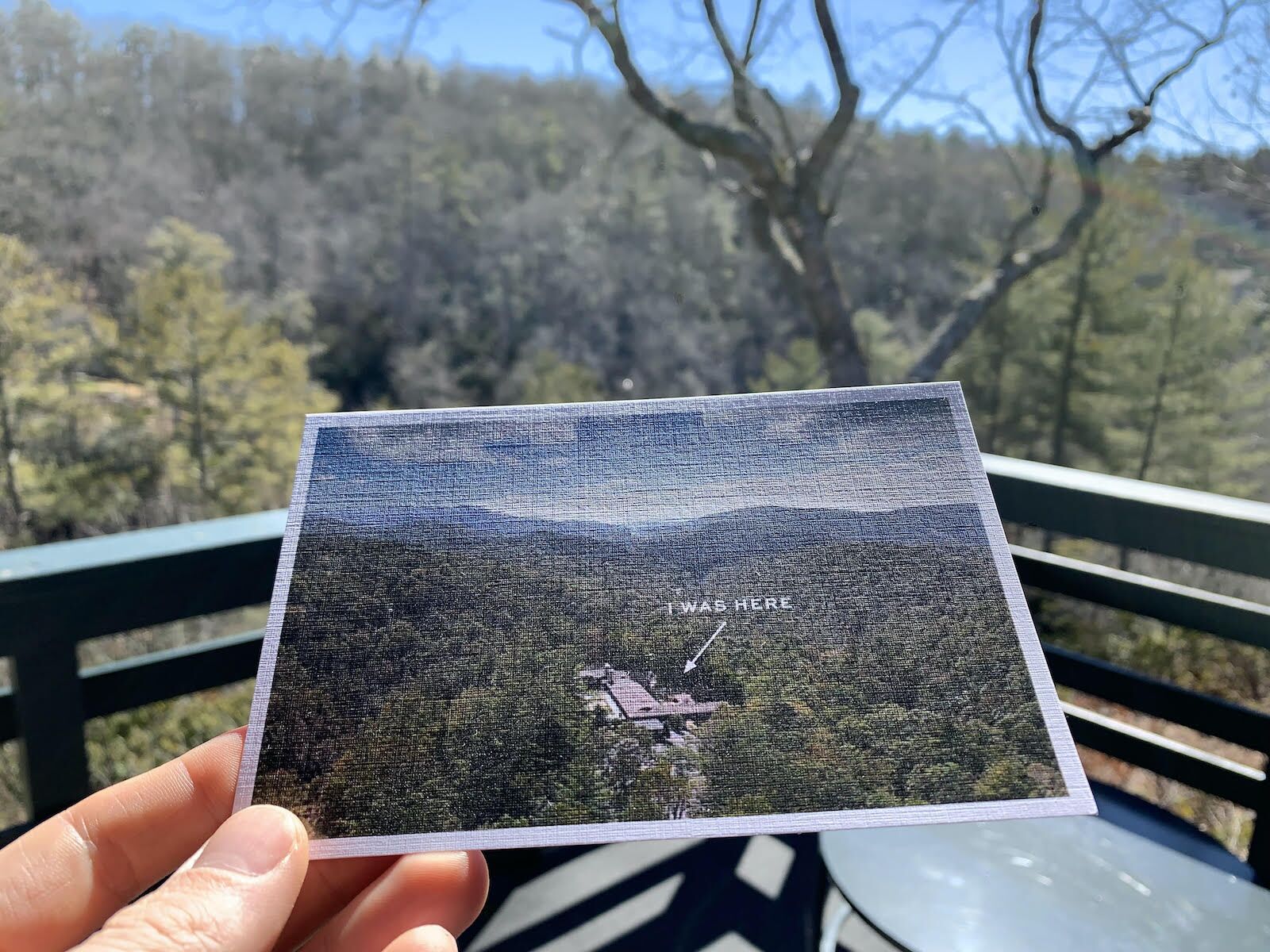 Much as the setting of a film can be a character in its own right, these touches make the physical lodge function like a member of its own welcome committee. They’re the work of the Indigo Road Hospitality Group, the latest in a series of owners to oversee the property. Skyline Lodge was originally designed in 1929 by a student of Frank Lloyd Wright, saw a wave of renovations in the 1960s that inspired its current midcentury modern aesthetic, and reopened under new ownership last July in the style of a fresh-faced motor lodge.

Blurring the line between the indoors and outdoors is fundamental to the lodge’s latest design. The central courtyard is a communal area where guests can sit beneath the stars — under heat lamps, of course — with a bottle of wine or craft beer that’s available for purchase at reception. In back, there’s a large patio and firepit that’s prime for roasting marshmallows and trying to spot black bears. Staying at the lodge feels a little bit like glamping in this way, only instead of retreating to tents when they’re done socializing, guests return to one of 40 cozy rooms with a private terrace and an electric fireplace to lull them to sleep. 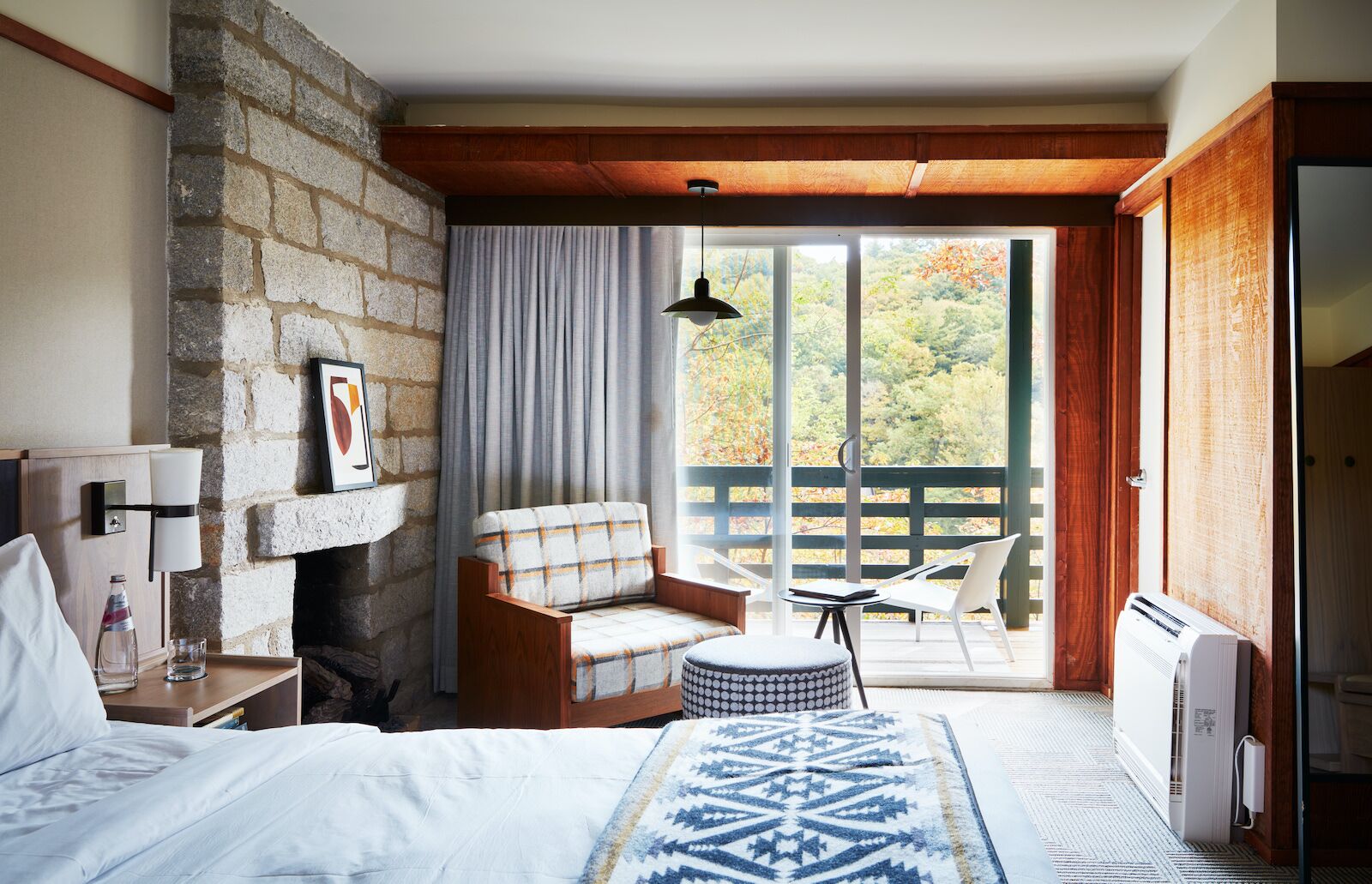 Sleepy is an apt descriptor for the lodge on weekdays. Despite being fully booked during my visit, I only encountered a few other guests between the Thursday evening that I checked in and the Friday morning that I spent on the property before leaving to hike the Yellow Mountain Trail, whose trailhead is a short drive from the lodge. When I returned that evening for a 7:30 PM dinner reservation at Oak Steakhouse, on the other hand, it seemed as if everyone in town was already there, congregating around the cocktail bar. Though the lodge’s steakhouse is the seventh location for the Oak Steakhouse chain, it’s the only steakhouse in Highlands and one of the swankier spots in town for a splurgy meal.

Guests of the lodge also have the option of hiding out at Butlers Lounge if they’re looking to avoid the weekend dinner and drinks crowd. There’s only enough space at the bar to accommodate a few patrons at a time, with a sunroom and patio to choose from once you have a drink in hand. A cozy reading nook also makes Butlers a pleasant daytime stop.

Between the woodsy location, homey furnishings, and indoor-outdoor layout that integrates the two, the irony of a place like Skyline Lodge is that you could easily spend an entire visit snuggled up on the property or out exploring the wilderness that is the lodge’s backyard. How you choose to experience Highlands is up to you — but if you’re headed in that direction, Skyline Lodge is a safe bet for a dreamy stay.