Every year, the American Kennel Club (AKC) tallies the number of pups registered as each recognized breed. And every year, for the past 28 years, one breed has reigned. Here’s the backstory behind that dog, and 10 of the other most popular purebreds. Of course, it’s important to adopt our new best friends rather than purchase them. According to the World Health Organization, more than 200 million stray dogs roam the world, looking for a family. Puppy mills, commercial, profit-driven breeding facilities, generate many millions of often undersocialized purebred pups that will end up in shelters after not selling out of pet stores, internet sites, or classified ads. That said, if you are invested in acquiring a certain pedigree as a forever friend, there are hundreds of AKC-endorsed breed-specific rescue shelters scattered throughout the country. You can have your preferred kind of animal and save a life at the same time. 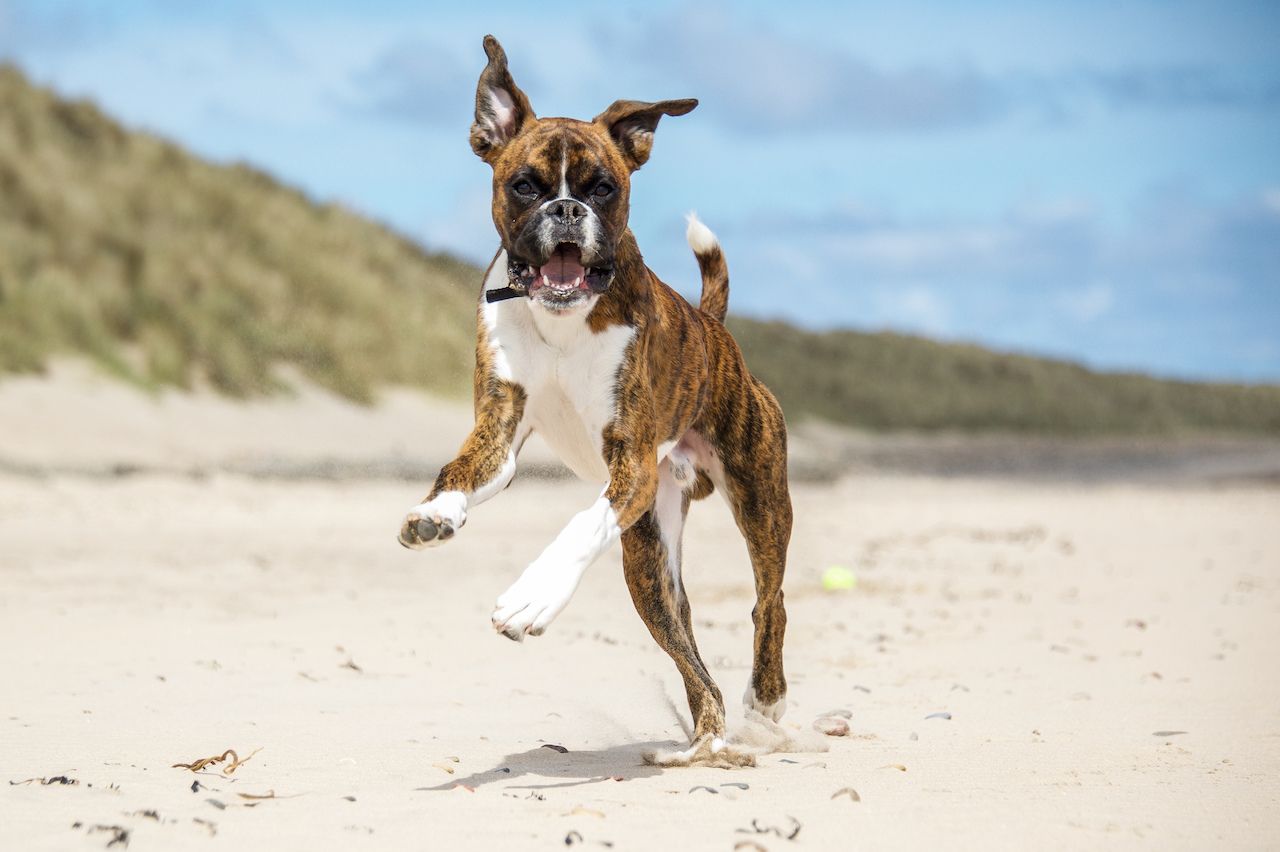 Boxers are great fun. They like to playfully box, hitting with their paws while standing on their hind legs, and that joyful action is the source of the breed’s name. According to Jack Wagner’s original 1939 volume, The Boxer, boxers are a German breed, deriving from a long history of hunting dogs. The boxer was first officialized in Munich in the late 1800s to early 1900s. Today, the breed standard remains consistent, according to photographs we have from some of the original boxer stock. In 1951, a boxer named Bang Away won Best in Show at Westminster, and the breed’s popularity skyrocketed. It has stayed high ever since. Today’s breed standard allows for two colors: fawn or brindle. There are white boxers, but they’re genetically inclined toward deafness. 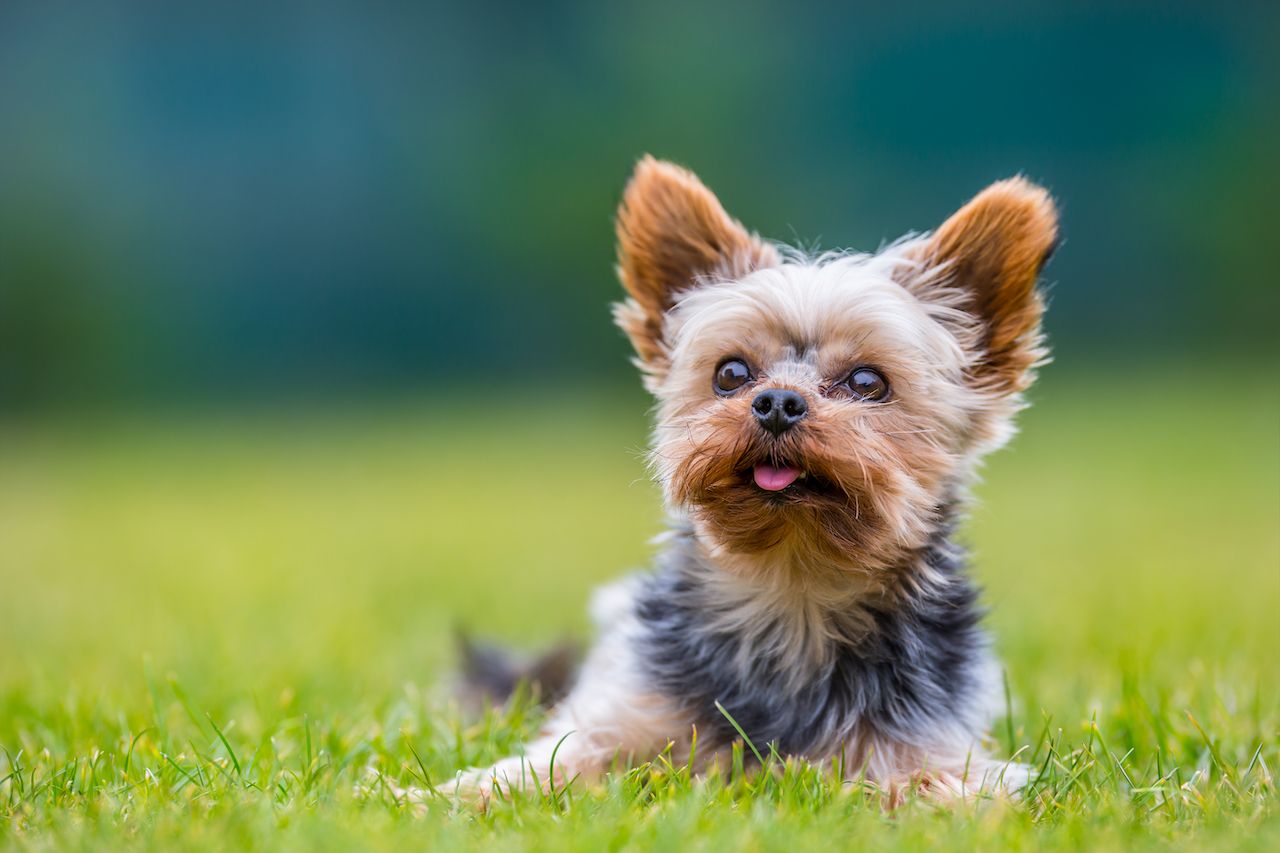 Yorkies are tiny terriers, with an attitude to match. In the 1800s, Yorkies were bred as ratters to defend textile mills and coal mines. They come from Yorkshire and Lancashire counties in England, bred as a product of terriers introduced from Scotland and a selection of local terriers like the Skye and the Dandie Dinmont. First known as the broken-hair Scotch terrier (not to be confused with the Scottie) and then called the toy terrier, they became known as the Yorkshire terrier in 1874. Yorkies became fashionable doggie accessories to the wealthy classes when the breed was recognized by the British Kennel Club in 1886. Purebred Yorkies got smaller as humans’ hearts grew to love them. 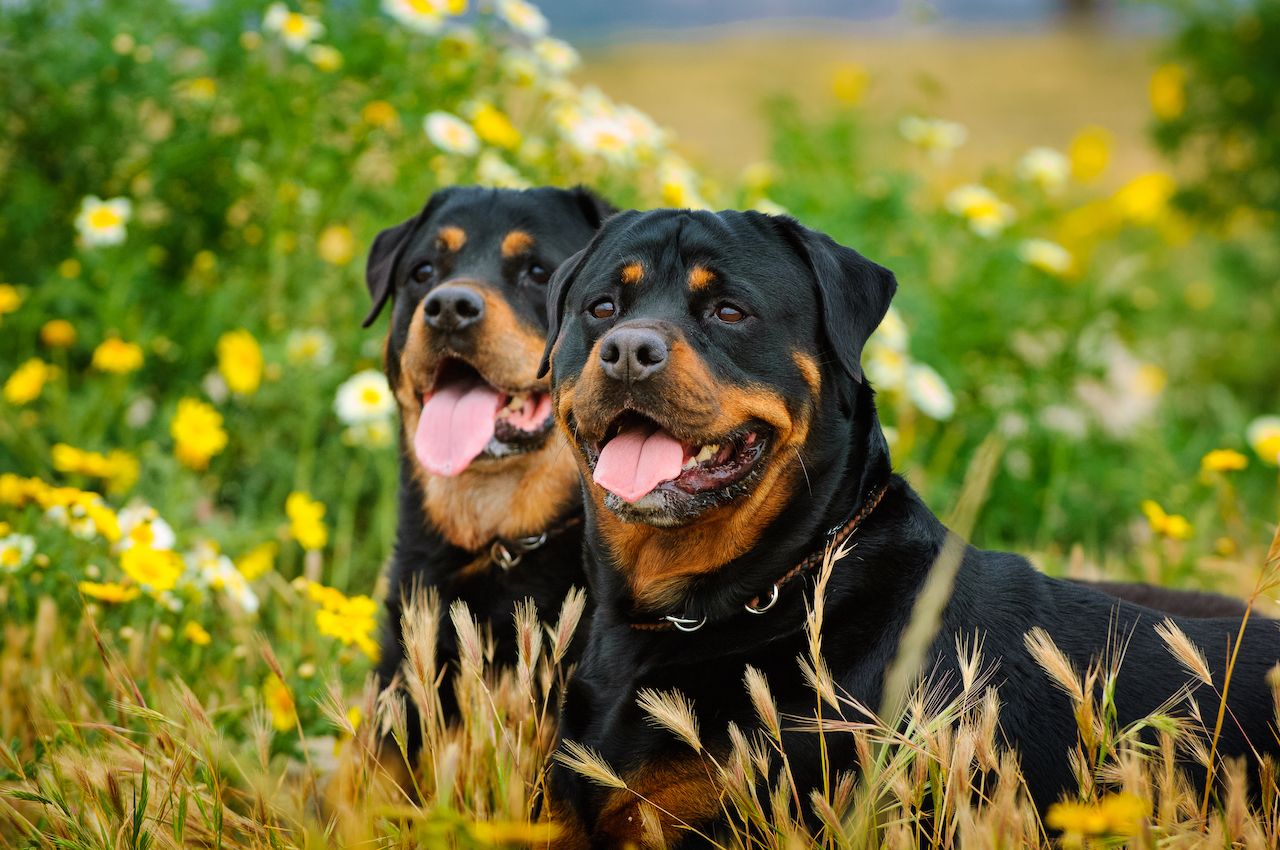 Rotties are rather intimidating guard dogs but they’re also notorious clowns. The Rottweiler has a fascinating heritage. Soldiers in the Roman Empire presumably bred them from two early mastiff ancestors: the molossus and the Italian mastiff, to guard their stock animals in the Alps. When the Roman Empire collapsed, cattlemen in the town of Rottweil, Germany, adopted their dogs as protectors of the herds, which is why they’re also known as butcher’s dogs. After the railway came through the area, the dogs were repurposed as messenger dogs — like four-legged mail carriers. When the railway came and began delivering packages and letters, Rottweilers almost died out, until some dedicated breeders resurrected the animal in the late 1800s. After this resurgence, the breed came to serve as police and military canines, seeing eye dogs, and search and rescue assistants. 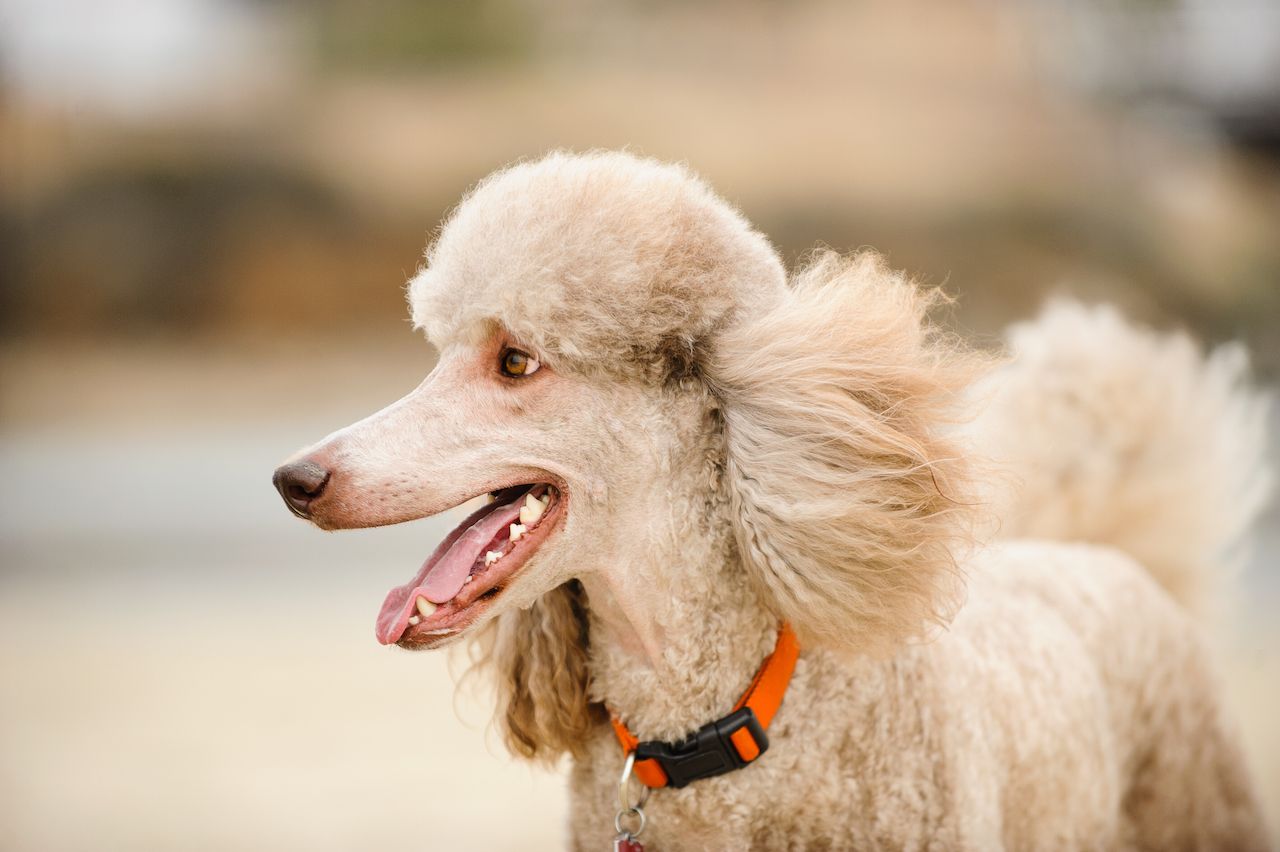 Often considered the second-smartest dog breed after the Border collie, poodles have a reputation for being too refined. But poodles love water and are excellent swimmers. They’re wily but highly trainable. Although the poodle is France’s national dog, the breed probably started as a water dog in Germany sometime in the 1600s. (There is, however, an ongoing debate about whether the breed derives from the French Barbet.) We do know that the original poodles were the big ones and were later bred down to miniatures. The toy version was bred in the US in the 1900s to accommodate humans residing in small dwellings. Today poodles are used for everything from truffle hunting to tracking and herding. 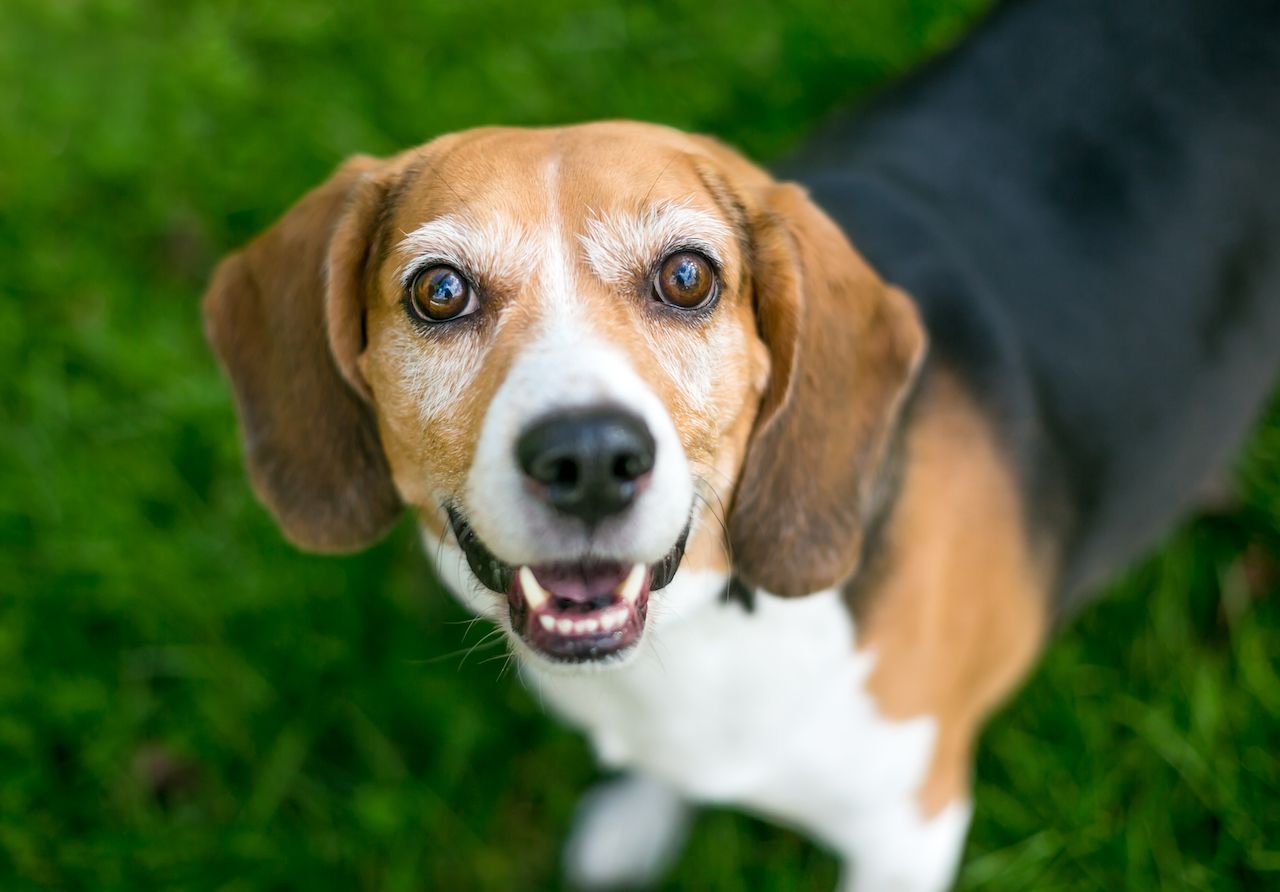 Although we don’t know too much about the beagles’ deep history, we know that there were dogs around their size hunting in Greece as early as the 5th century BC. Breeders trained the dogs to hunt in packs, so they love being with their humans. Rumor has it that the breed was slow, so breeders crossed them with greyhounds, creating a quick, lithe, and small group hunting pack animal. No one knows where the contemporary breed got its name. It may derive from beag, the Gaelic word for “little.” Or, it could be a twist on the old French word for the baying horn sound they make when hunting (something like “be’geule”). The first beagle registered in the US in 1885 and was named “Blunder.” Now beagles are used all over the world for airport security, rabbit hunting, and as pets for cool kids like Charlie Brown. Beagles know how to win friends, too — they’re sweet, loving, cooperative, and funny. 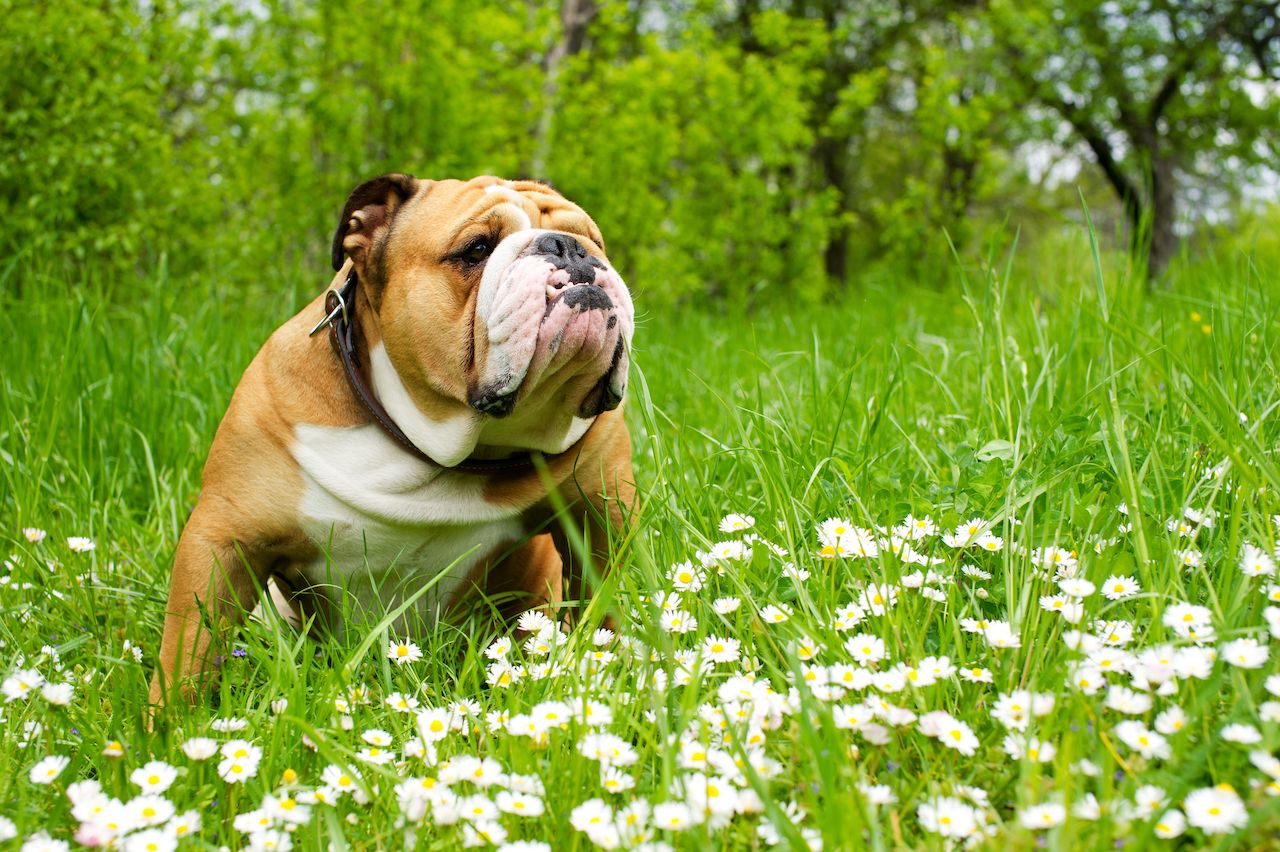 Bulldogs can live anywhere, rural estate or urban apartment. They don’t care — they’ll knock down any wall with their head. Maybe all that tenacious head butting is why they’re so mellow (and why their face is flat). Or maybe it’s because they’re too round to get up. They’re an old breed, originating in England as part of a lineage of canines that rounded up farmers’ horses, cattle, and boars. Bulldogs were selected to aggressively participate in the cruel 12th-century sport called “bull baiting.” Bull baiting involved spectators betting on who would win a battle between a staked bull and a slew of dogs, wherein a dog would pin the bull’s nose to the ground and win, or die by bull mauling. From these bull-baiting assailants, breeders selected the most fearless canines with the strongest jaws, and the modern bulldog was born. When bull baiting became illegal, bulldogs went back to herding large animals. Today they’re extremely popular in the US and the UK, serving as sports mascots and friendly companions. 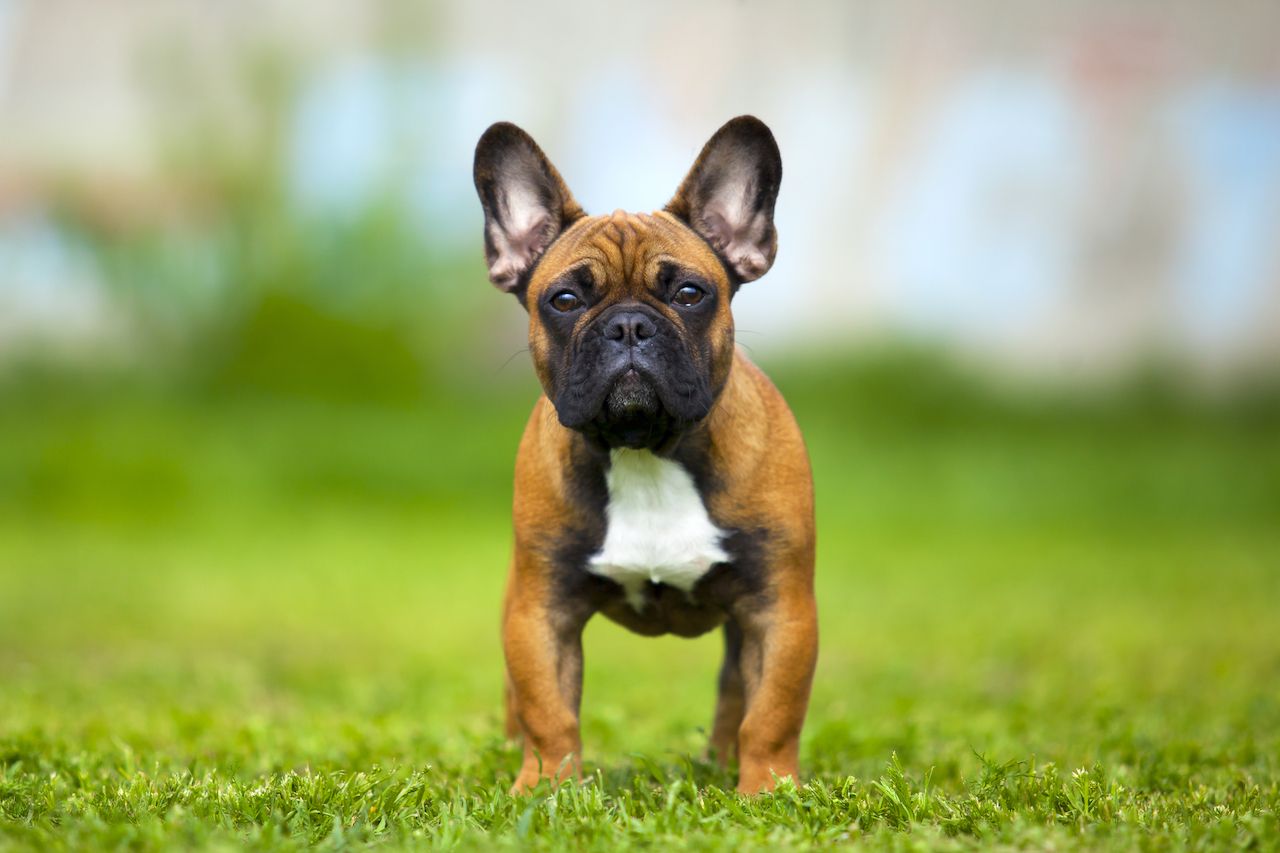 Frenchies look adorably quizzical, with their giant bat ears sticking straight up and a veritable look of incredulity in their eyes. Like so many AKC breeds, the French bulldog has its origins in 1800s England. At first, the breed was designed to be a “bull baiter,” a sport that pit dogs against bulls to the death. Frenchies were therefore selected for strength, athleticism, relatively long legs for its body, and a terrier spirit. When bull baiting was outlawed in the UK in 1835, Nottingham lacemakers began to keep them as a sort of factory mascot. The lacemakers took their beloved toy bulldogs when they moved en masse to France. There, they were bred with pugs and a terrier or two, and voila! the Frenchie was born. The breed came to the US, where the “bat ears” became breed standard markers. They rose to popularity in the US in the 1980s because of a newly invigorated French Bull Club of America, and maintained a steady place on the AKC’s top-registered breeds list. Sadly, Frenchies are prone to obesity and respiratory disorders. 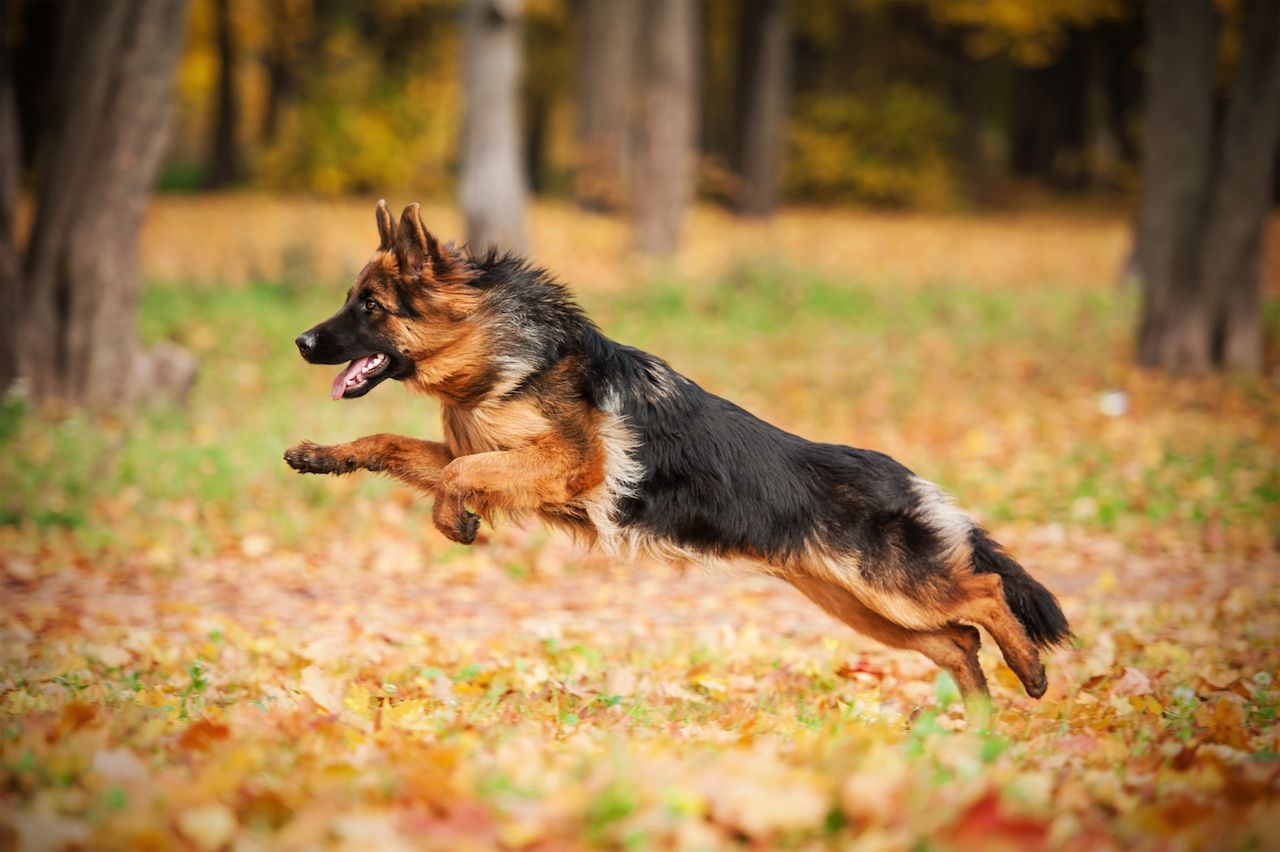 The German shepherd came about in the late 1800s, when, under the leadership of Captain Max von Stephanitz, a slew of German breeders came together to fashion the ideal herding dog. Contrary to popular belief, German shepherds and Alsatians are the exact same dog. Several armies used the dogs in WWI, and the British didn’t want to refer to their canine counterparts as German anythings. Though the misnomer was officially dropped in 1977, German shepherds are still often referred to as Alsatians (after the French-German border city of Alsace) in the UK and other parts of Europe.

In the early days of television and film, German shepherds became popular entertainers, like Rin Tin Tin and Strongheart. Today they’re commonly used as guide dogs and police and military dogs — this fiercely loyal breed is strong and smart enough to accomplish whatever task is asked of it. They’re fearless quick thinkers who will put themselves in harm’s way to protect their humans. 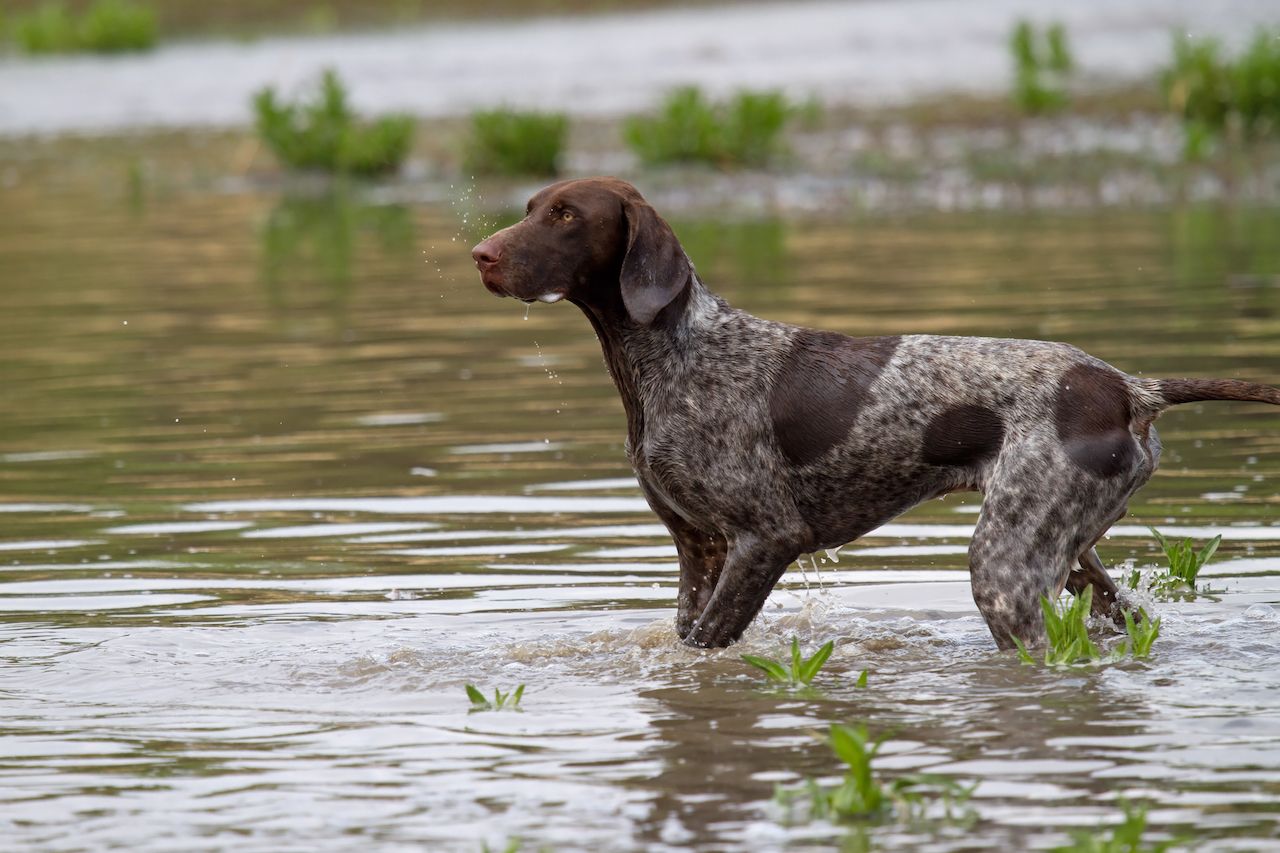 Creeping rather unexpectedly up the AKC’s Most Registered list for the last two years, the German shorthaired pointer is finally being recognized for its physical prowess and loving spirit.

Dogs that went “on point” were first documented in the 1200s. For the first 500 years or so, pointer types ranged in size, coat variety, and shapes. The Germans began breeding this medium-sized agile dog, with its upturned nose, in the 1700s, selecting it for its high biddability — a canine lover’s term that means the GSP is super willing to do its owner’s bidding. Specifically, the GSP was bred to hunt birds but over the years evolved to kill and bring back everything from boars to deer to ducks. GSPs are sometimes referred to as the “triathlete of dogs” because of their keen ability to point, hunt, and retrieve. But they’re even more versatile than that: fast, smart, extremely energetic, excellent sniffers, runners, and swimmers. They even work as falconers. 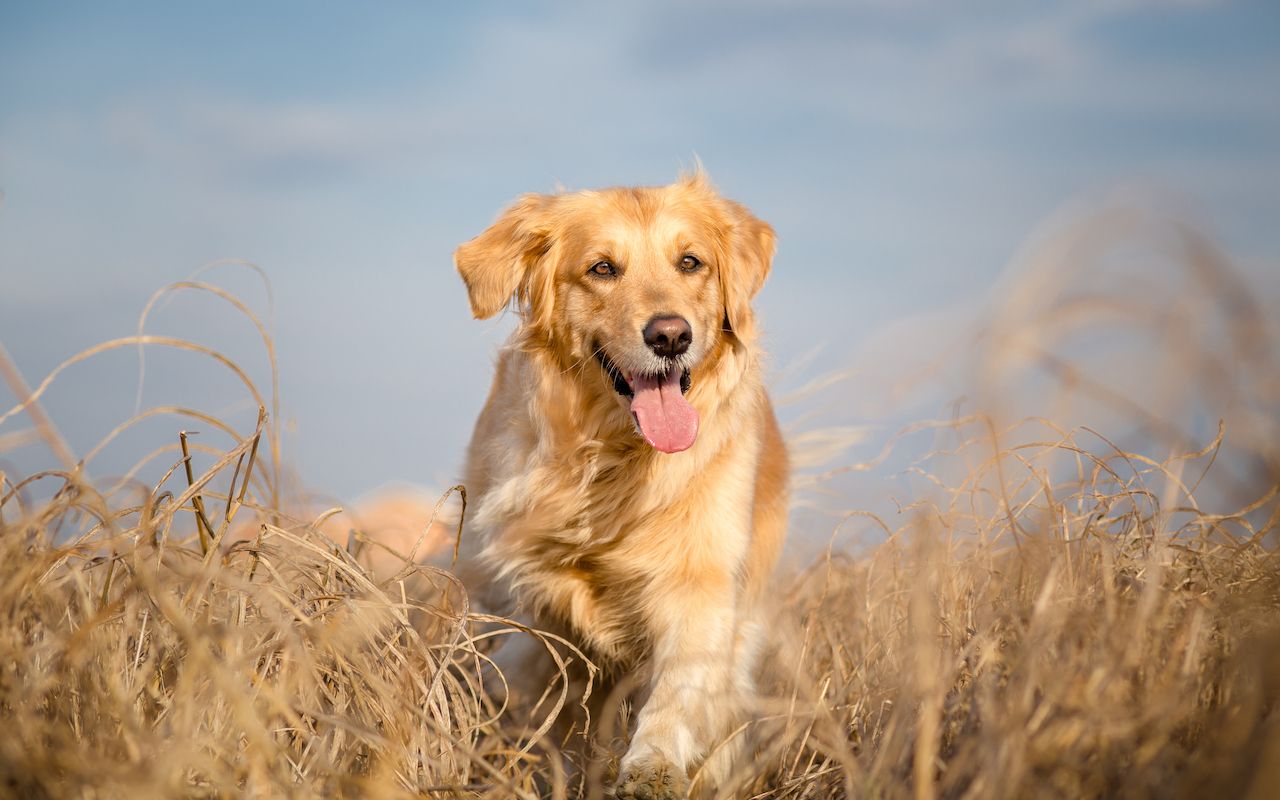 Goldens hail from Scotland. Dudley Marjoribanks, the first Lord Tweedmouth, developed the breed. It took him 50 years — from 1840 to 1890 — to come up with what we now recognize as the beloved breed, crossing what he called a yellow retriever and the now-extinct tweed water spaniel, now and again adding bloodhound and Irish setter DNA to the mix. The breed has always been loved, but it became popular in the US in the 1970s when President Ford had his golden, named Liberty.

Goldens are loving dogs who shed a ton while happily bringing the ball back to you, over and over again. They’re nothing shy of joyous as they flounce and frolic, long golden hair flying. All the while, they’re working hard to please their human families and protect their homes. They’re also some of the best dogs to assist people that are disabled. 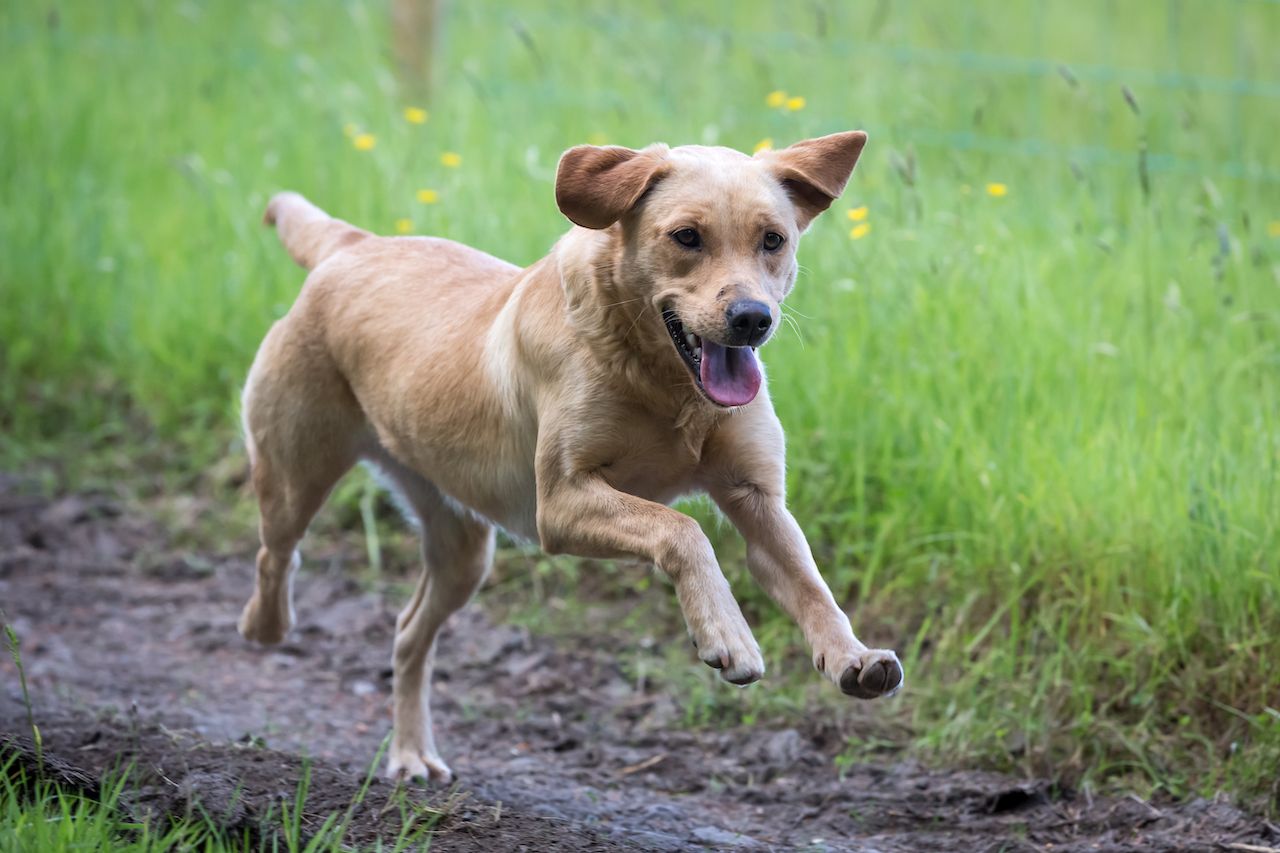 This is the breed that has been the number-one most frequently registered in the AKC — and has, for a record-breaking 28 years, every year since 1991. Labrador retrievers were originally bred in Newfoundland, Canada, to serve as a fisherman’s buddy and fish retriever. Their forebearers were short-coated St. John’s water dogs, though no one knows where that breed came from. They were brought to England around 1820, but their hunting prowess and temperament preceded them. The Second Earl of Malmsberry was so impressed that he devoted his entire kennel to stabilize the breed.

Labs are high-energy sporting dogs, intelligent and friendly. Temperament is what makes them most loveable. They’re easy to please, and get along with everyone — including other pups.

Airports + Flying9 Amazing Things Airport Dogs Can Do
Tagged
Pets
What did you think of this story?
Meh
Good
Awesome