Stepping inside Shane Confectionery in Philadelphia is like walking into a sacred space where the congregants worship candy. The smell from 150 years of chocolate production in the shop’s kitchen has seeped into the walls and floors. When the candy makers roast chocolate, the aroma wafts through the building. The interior of the shop has the original, early 20th-century decor of gilded, ornate fixtures painted white and blue. Small lamps shaped like upside down tulips hang from the walls. Large mirrors are mounted between shelves stacked with jars filled with candy. The shop is a time machine into the past, to a pre-Depression era when sweets were elaborately designed, and stores competed to seduce window shoppers.

Shane opened in 1911. In 2019, it’s still a “glittering jewel box,” as Pavia Burroughs, Shane’s creative director, puts it. Ryan Berley, half of the sibling duo that owns the shop, nicknamed Shane a “cathedral of confection.” Burroughs has noticed that when customers come in, they tend to whisper while browsing the glass cases stacked with confections, like they would in a church.

As the oldest continuously operating candy shop in America, Shane Confectionery is a Philadelphia staple, as much a resident of the city as the people who live there. In 1863, Samuel Herring opened a candy shop at Shane’s current location, 110 Market Street. Two years later, his son, Benjamin, took over the business and it stayed in the family until 1899, when William T. Westcott bought the building. Westcott kept the candy shop running until 1910, when Edward R. Shane bought the business. Shane immediately went to work redesigning the shop to satisfy turn-of-the-century tastes, installing the elaborate decoration that is still in place today.

The Shane family operated the candy shop until 2010, at which point Barry Shane had taken over the business. Barry, eager to retire but with no family members at the ready to carry on the family business, sold the shop to Ryan and Eric Berley. Barry made sure he didn’t sell the shop to the first interested party. The Berley brothers, Barry knew, had a vested interest in maintaining the Shane legacy. 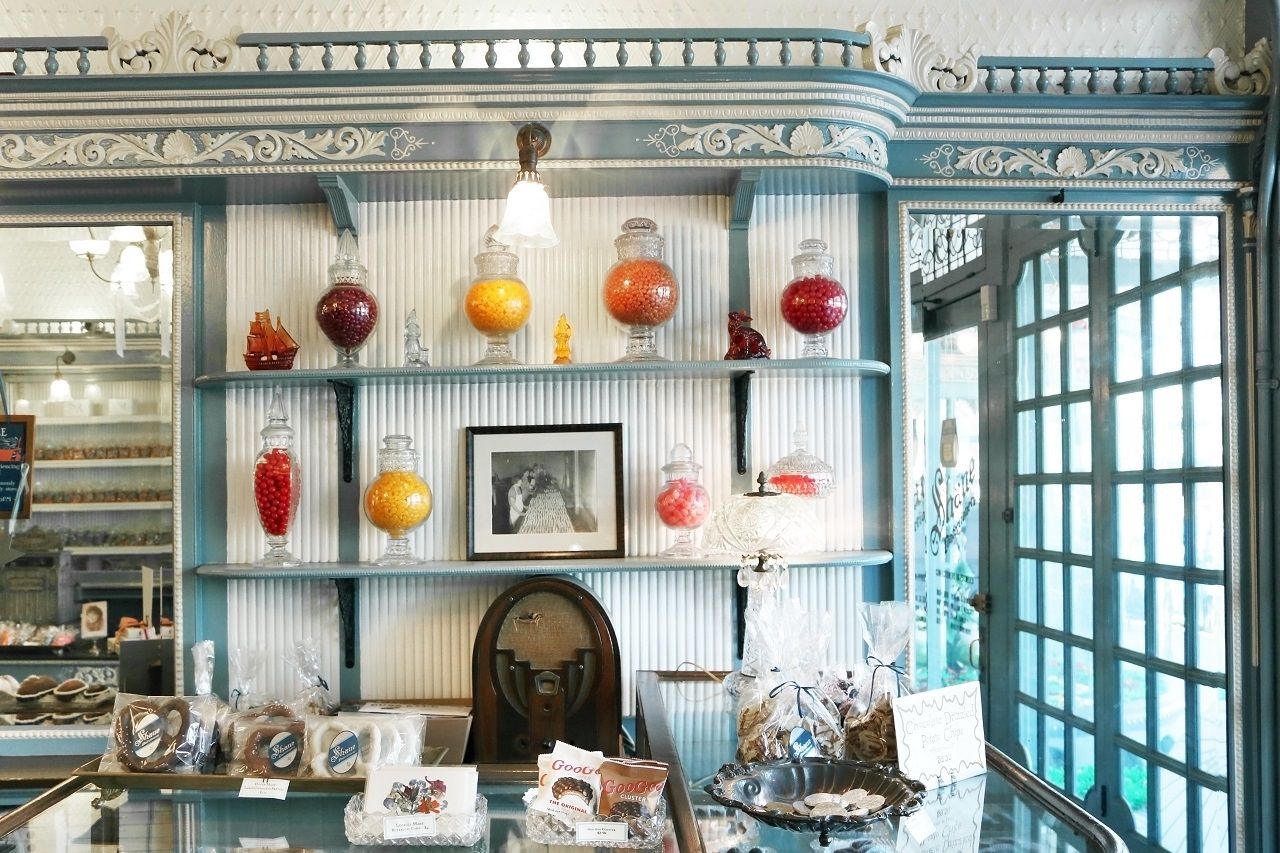 Ryan and Eric grew up surrounded by historical artifacts. Their mother opened an antique shop in the front room of their house the year Ryan was born, and the brothers spent many family trips in the back of a van while she hunted for new treasures to add to her collection.

“The brothers see themselves as stewards of history,” Burroughs says.

When it came time to open a business of their own, of course the brothers looked to the past. They already owned Franklin Fountain, a replica of an early 1900s soda fountain and ice cream parlor, where, today, bow ties are part of the staff uniform. A vintage candy shop seemed like the natural next step, but they faced a problem: The brothers had no idea how to make candy.

Thankfully, Barry stuck around long enough to help them learn how to use the antique stove and copper pots, as well the cream beater, the machine used to make the filling for Shane’s signature buttercream candy that’s still made with the original Shane family recipe. The Berleys hired a professional candy maker too, of course.

Except for a modern stove, there is very little contemporary equipment used in the kitchen. Shane simply doesn’t need (or want) to make mass-produced batches of candy.

“The demand is lower than it was at the turn of the century,” says Laurel Burmeister, manager of the shop’s historical outreach programs. “These days we don’t get a lot of people looking for that super sweet experience. What they’re looking for now is a salted caramel. There’s a movement in taste toward more complex experiences. It might have to do with the mass production of chocolate in the mid-century, which was very sweet, but now we’re back to thinking about confections as a more complicated, slow, special food.” 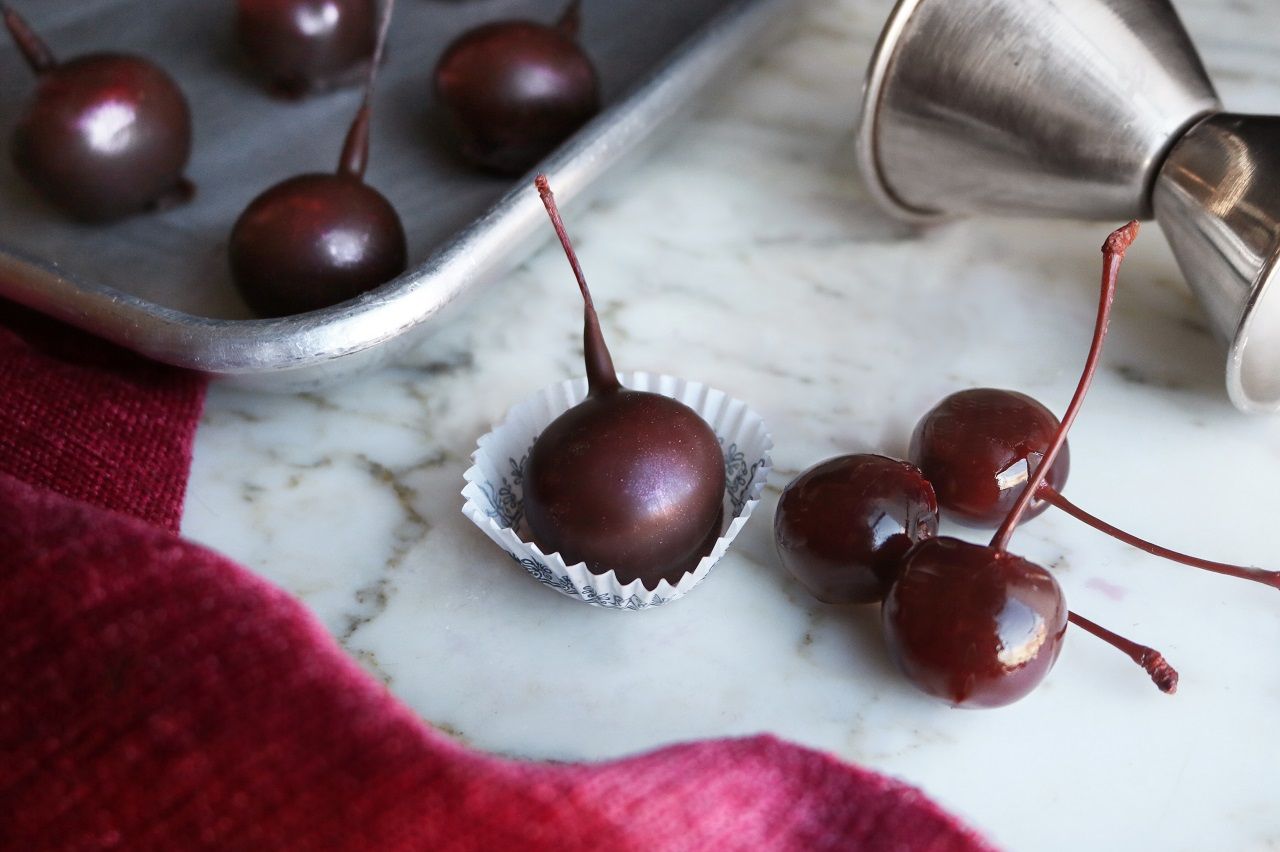 Shane Confectionery has survived so long because it never went the Hershey route. The shop stayed rooted in the community and stuck to its original purpose: to make hand-crafted, intricately detailed and creatively flavored, delicious candy. These days, Shane runs on nostalgia — not just for childhood, which candy naturally stirs up in adults, but for the glamor and the craftsmanship of the early 20th century.

“You can talk to the person dipping the chocolate in the back. That keeps people coming back,” adds Burmeister.

Yet that doesn’t mean Shane is stagnant. The shop has found ways to infuse contemporary tastes into its repertoire. For instance, the shop sells classic caramels in flavors like earl grey and chili cinnamon. In 2015, Shane launched its bean-to-bar chocolate line of ethically sourced, small batch cocoa beans roasted in-house.

“The beans are ground right in the back of the shop,” Burroughs explains. “You can see that happening. We turn them into finished bars with hand designed labels.”

But perhaps what makes Shane stand out the most is its dedication to candy making traditions that time has mostly forgotten. In addition to its signature buttercreams, the shop is one of the few in the country to still make a confection called clear toy candy. 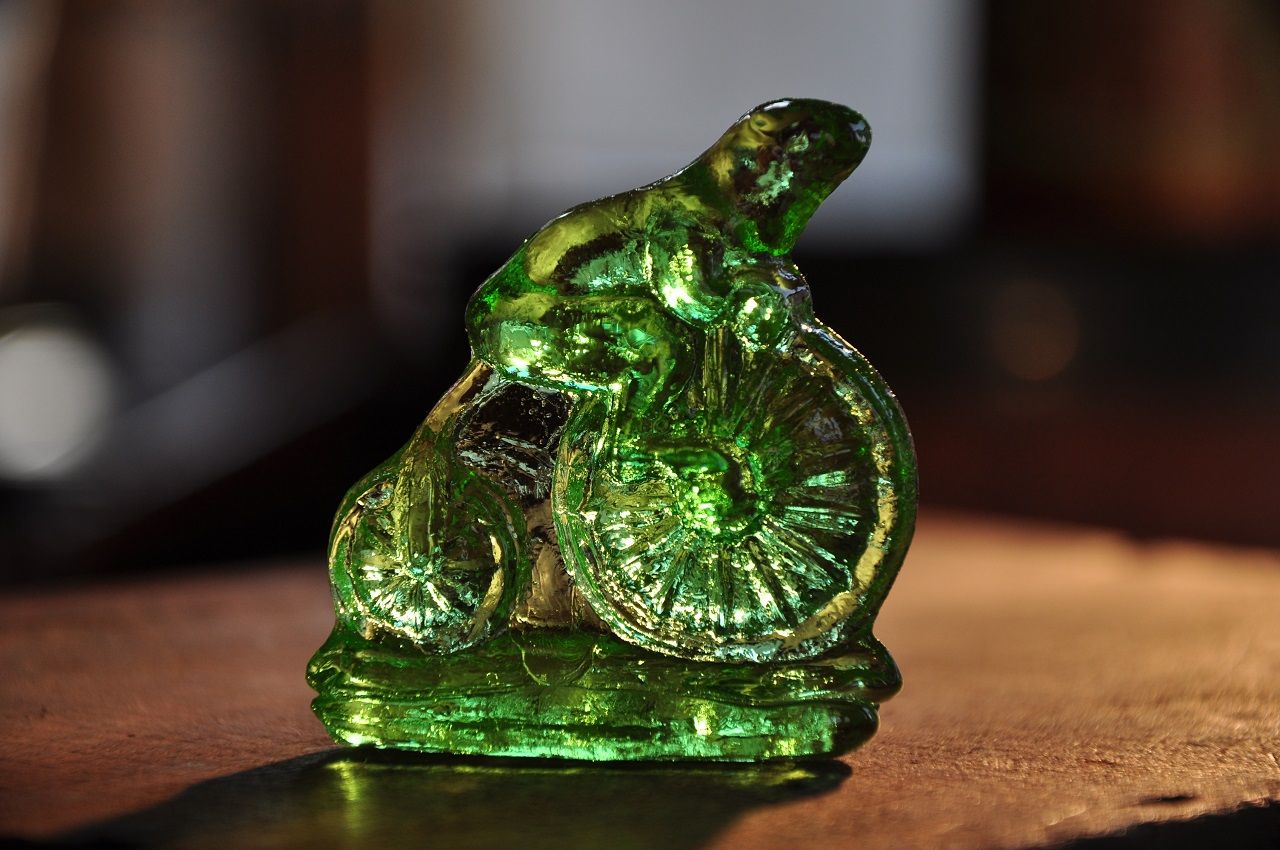 Clear toy candy is a Pennsylvania Dutch tradition, likely brought to the United States by immigrants from Germany and the United Kingdom. The green, red, and yellow candies are molded into 3D shapes and given as Easter and Christmas gifts. At Shane, the most popular clear toy candy shapes include rabbits, dogs, cats, deer, and ships, while some of the more unusual shapes include a frog riding a bicycle and a “goat standing on top of a terrified looking boy,” as Burroughs puts it.

Shane doesn’t keep making clear toy candy simply to keep the holiday tradition alive. There is, in fact, still a demand for it. Burroughs says that during Christmas, every available surface is covered in clear toy candy. Customers come in year after year chasing nostalgia, but also looking for a gift rooted in history, made with precision, care, and a little love, too. That’s why Shane has such an enduring Philadelphia presence: Its candy makes people feel special.

“I think that’s what Shane is doing,” says Burmeister. “We’re re-elevating chocolate and confections to a more attractive level that has been lost.” 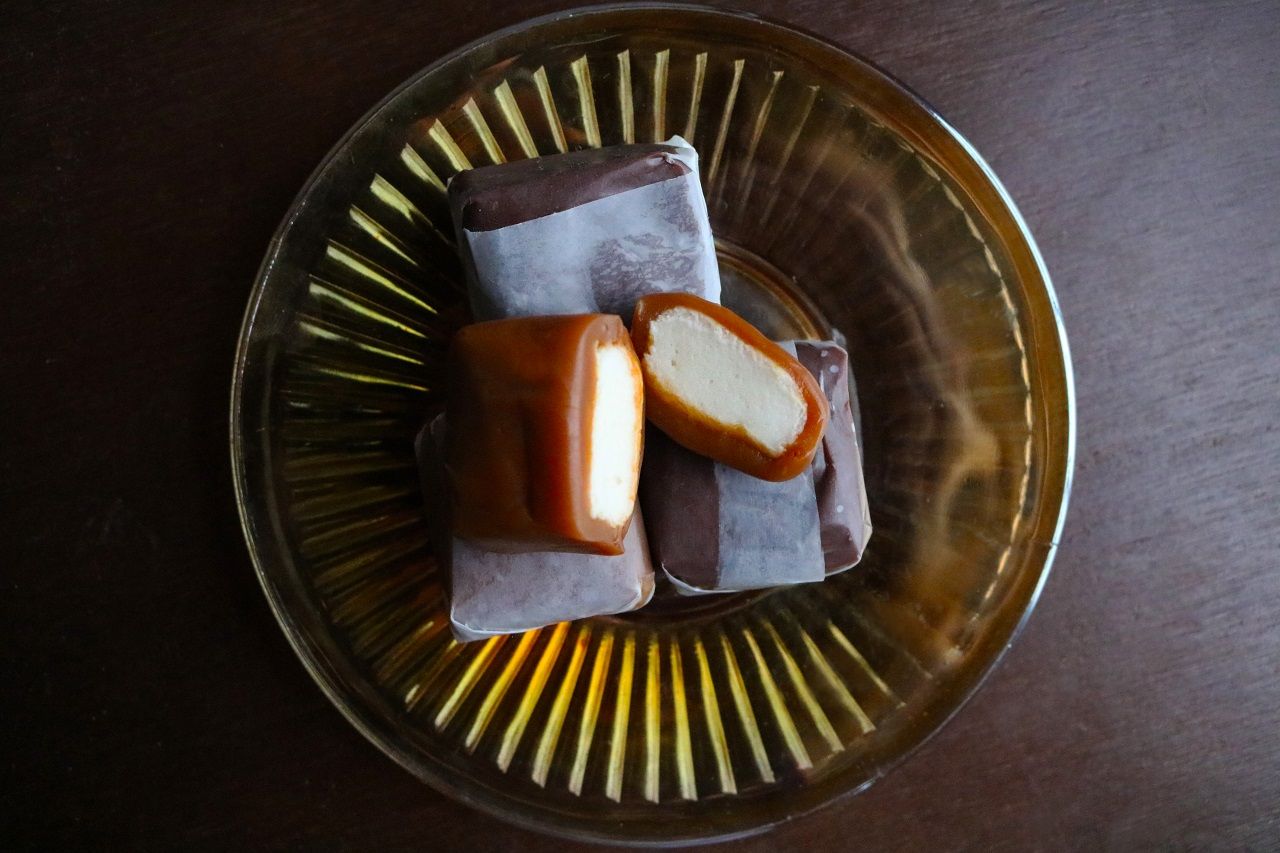 Shane Confectionery is certainly worth a visit if you’re ever in Philadelphia. However, the family owned, artisan candy shop is an American tradition. You can find shops around the country making hand-crafted candy. Some of these confectioneries have existed for a century, while newer establishments are also helping to keep the love of candy alive. These are five destination-worthy candy shops in the US. 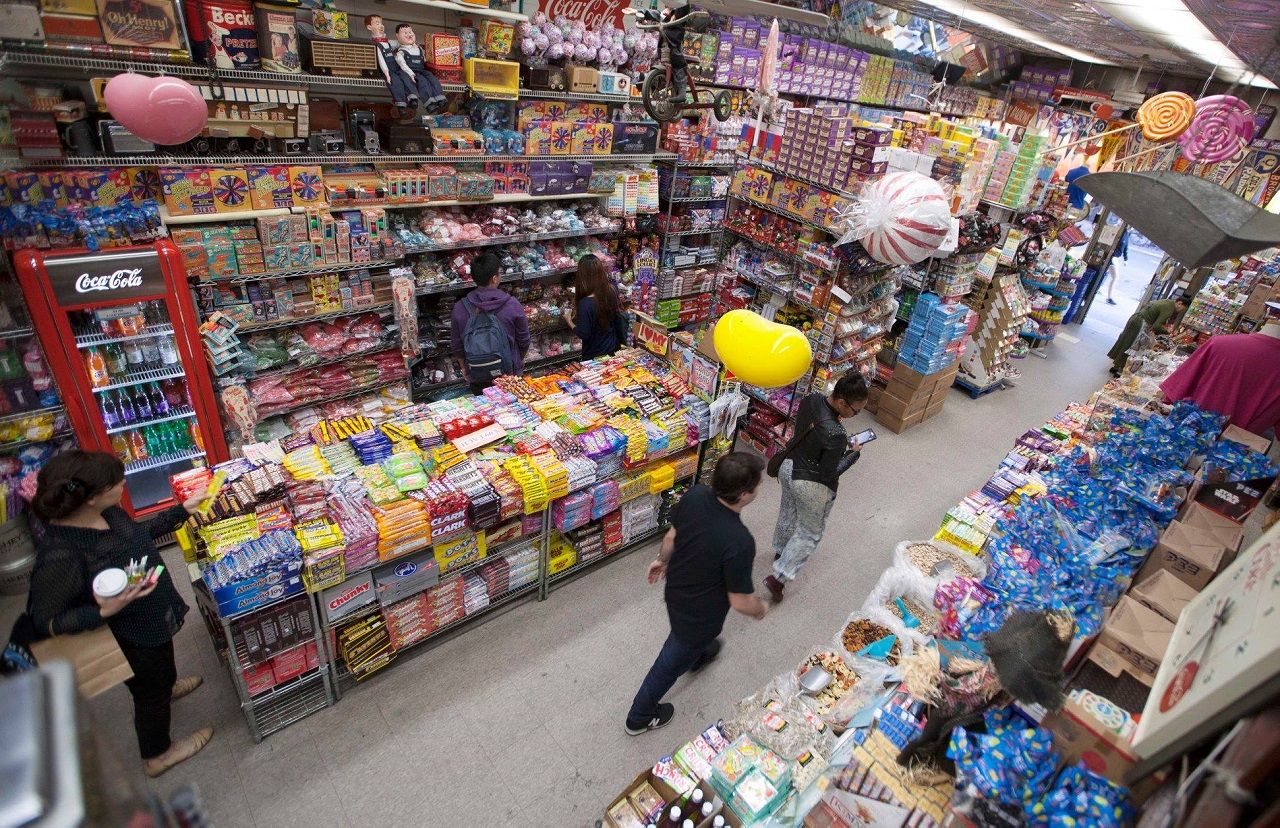 Originally located on the corner of Rivington and Essex, this expansive candy store, which carries everything from Ring Pops to gummy hot dogs to balloon animal kits, began as a shoe and hat repair store with a cart out front selling candy. After the Great Depression hit, only the candy sold, and in 1937, the space officially became Economy Candy. In the early ‘80s the shop moved to its current location, but it’s been family owned and operated since the end of World War II. 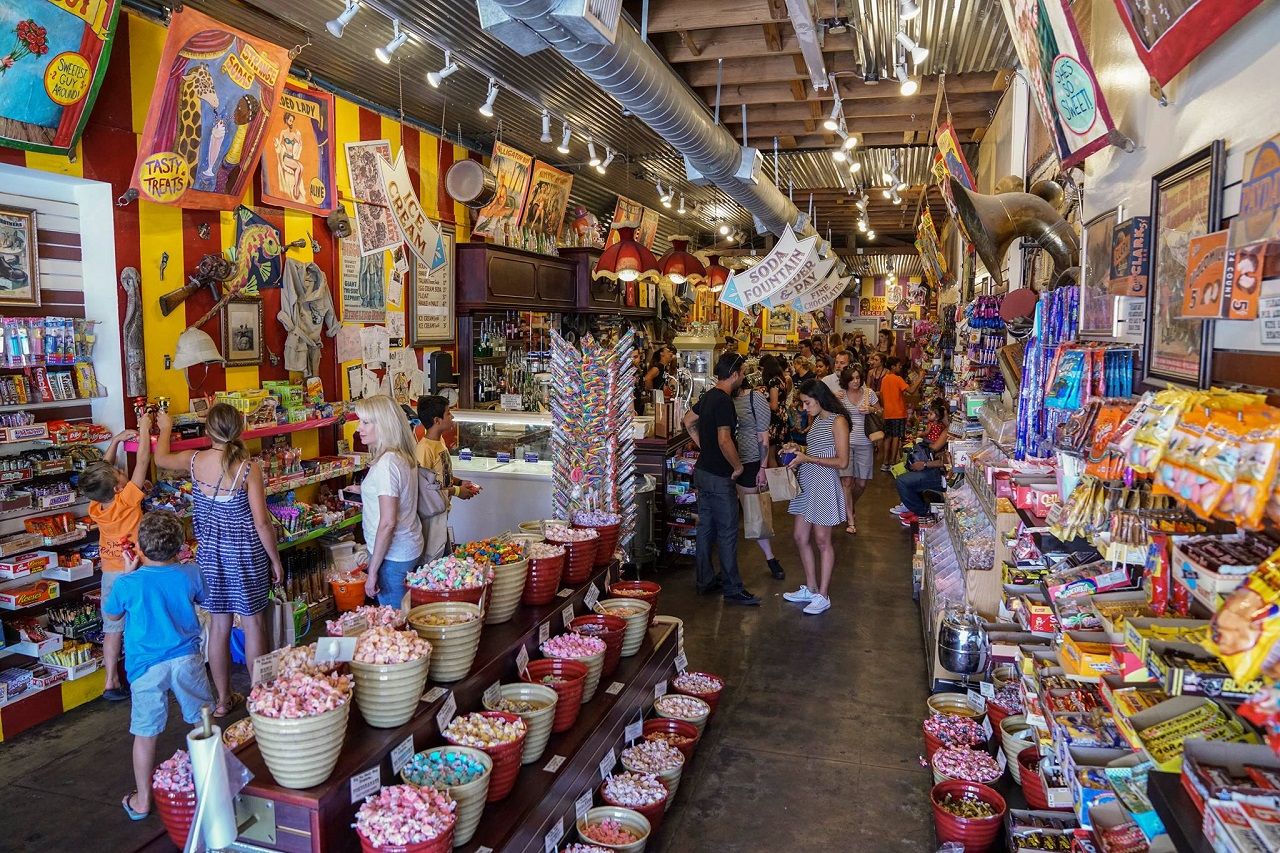 This Austin candy shop is so much more than barrels of salt water taffy and rainbow lollipops. Big Top comes complete with a soda fountain and ice cream machines. The shop opened on Austin’s famous South Congress Street in 2007, and the selection is massive. Big Top carries 400 varieties of bulk candies and 3,000 different wrapped candies. 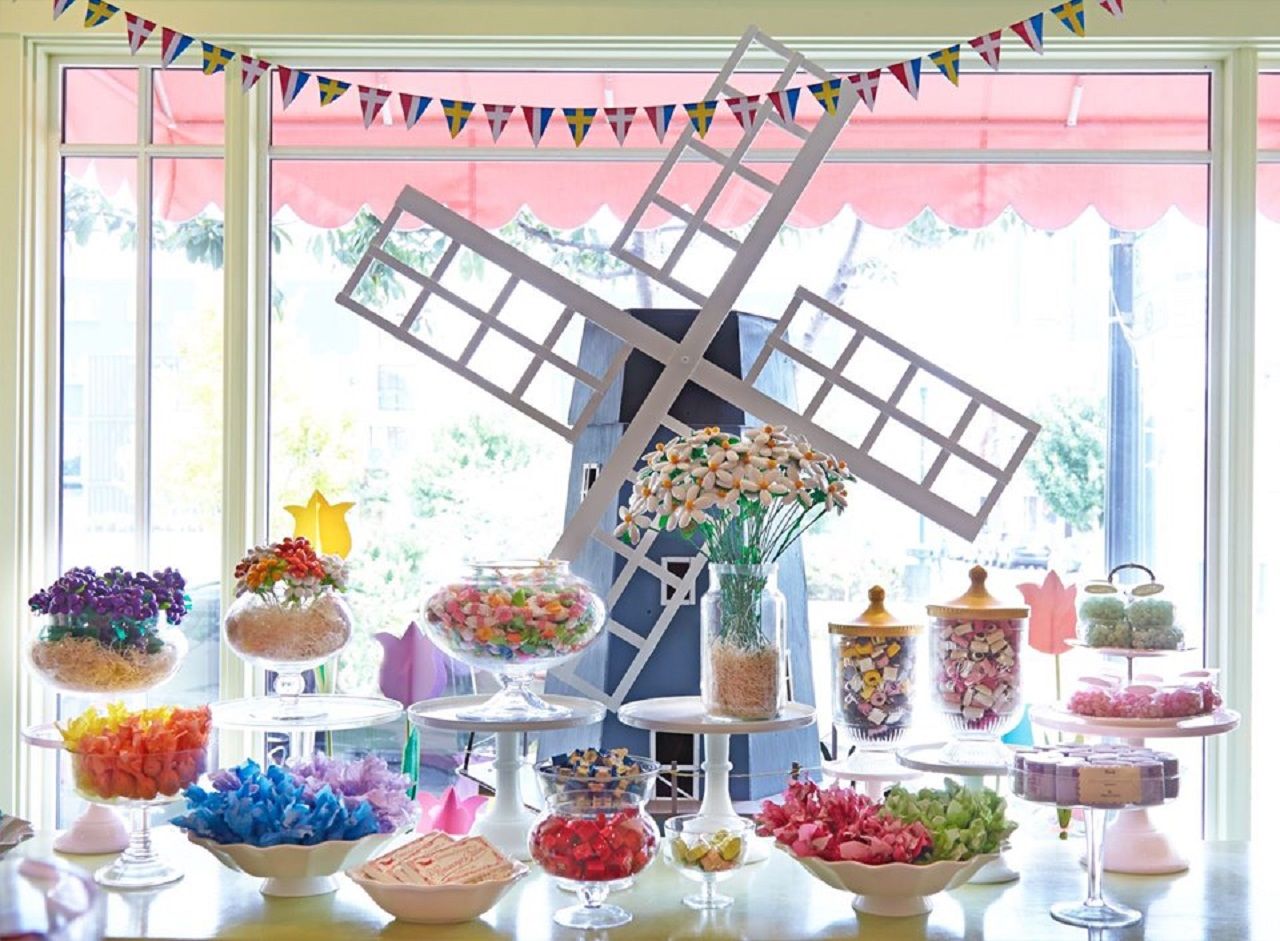 Miette began as a simple stall in the Berkeley Farmers’ Market, where the founder, Meg Ray, sold cakes and pastries. Nowadays, the shop specializes in not just handmade candies imported from around the world, but macarons, cupcakes, and caramels. 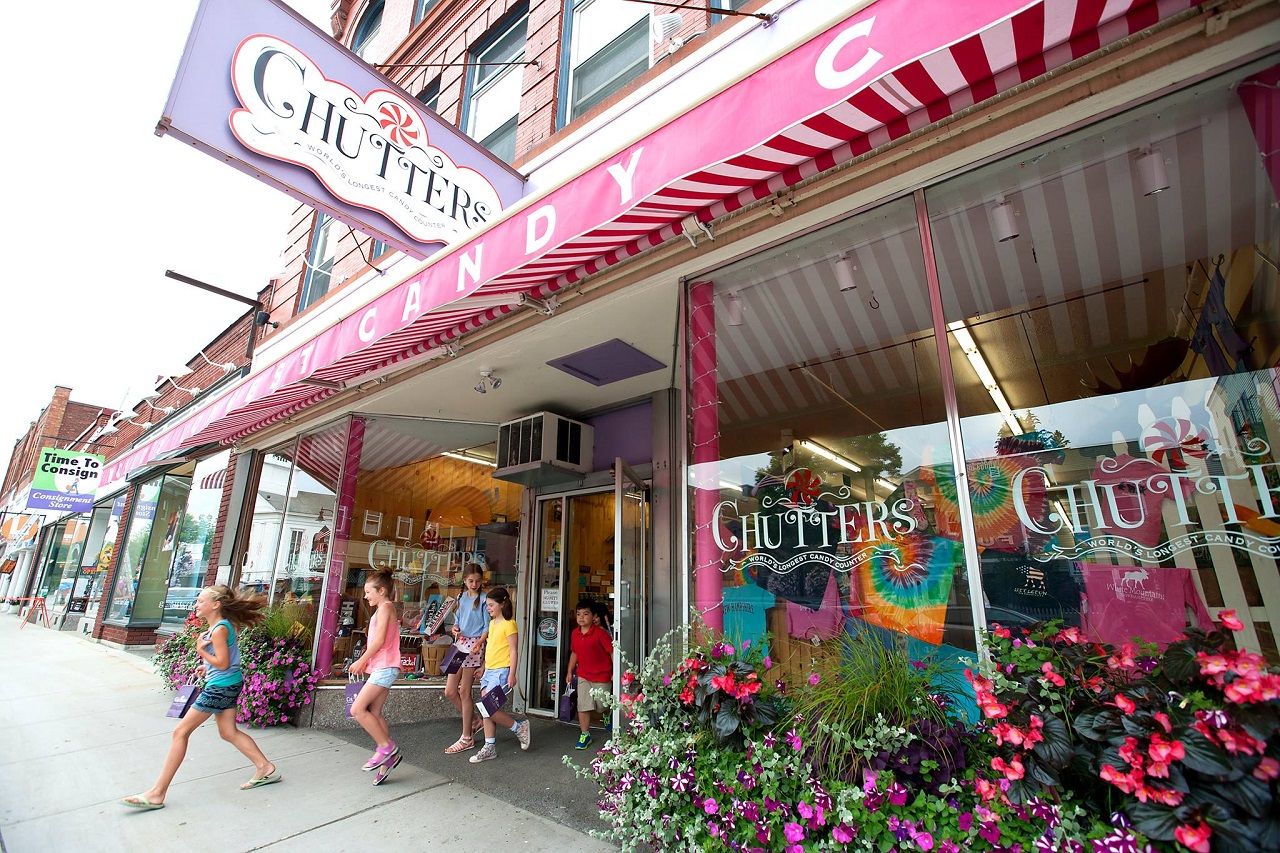 Chutters still bears the name of its original owner, Frederick George Chutter, who was a preacher turned candy salesman. The shop has been a presence in Littleton since the 1800s, beloved by the community for so long, at least in part, because of its 112-foot candy counter — the biggest in the country. Chutter’s fudge is especially popular. 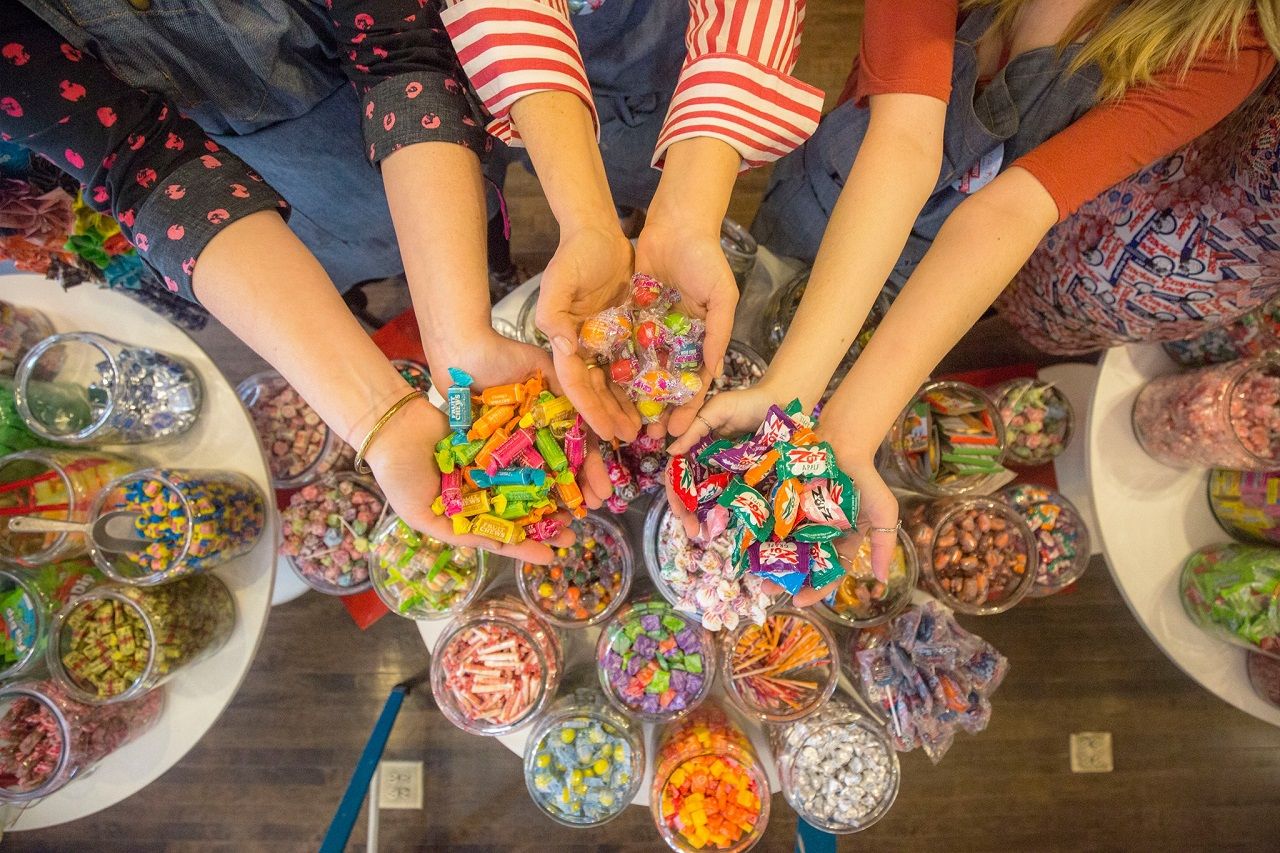 Founded in 2007 by Terese McDonald, Candyality carries 30 flavors of jelly beans and 21 colors of M&M’s. There’s a licorice bar, too, serving varieties imported from all over the planet. It’s become such a beloved Chicago institution that Food Network Magazine named it one of the top 50 candy shops in America.