Outside has become the hot new place for all social activities. The outdoors, according to the Centers for Disease Control and Prevention, is far safer than inside as long as social distancing and other safety precautions are followed. It’s why camping has become more popular than ever, and why RVs and road trips are taking the place of cross-country flights. But for those of us who’ve spent the past couple of months cooped up watching Netflix and baking bread, there’s the question of what, exactly, to do with all this time outside. The answer is lawn games and some cold beverages — or better yet, lawn games that involve drinking cold beverages.

Lawn games, as they’re typically called despite not always requiring a lawn, provide screenless entertainment, and people love to be entertained (especially when there’s a drink or two involved). Sure, there are always card games and bar games that only require a drink and your wit, but the best games to play outside are the ones that take full advantage of the space and fresh air.

There are the games you know, like cornhole, and the games that take a lot of large special equipment, like Kanjam or badminton or croquet. Then there are those that are easy enough to set up and play countless times. These five classic lawn games that provide it all.

How many people: Four (two teams of two)

How to play: Stick the poles into the ground around 20 feet apart and place the beer bottle on top. Each team stands on a side and takes turns throwing the Frisbee to knock the bottle off of the pole by hitting either the bottle or the pole. No one can cross their respective pole into the middleground.

How to make it a drinking game: Keep a drink in one hand at all times. Defense drinks for every missed catch and fallen bottle. 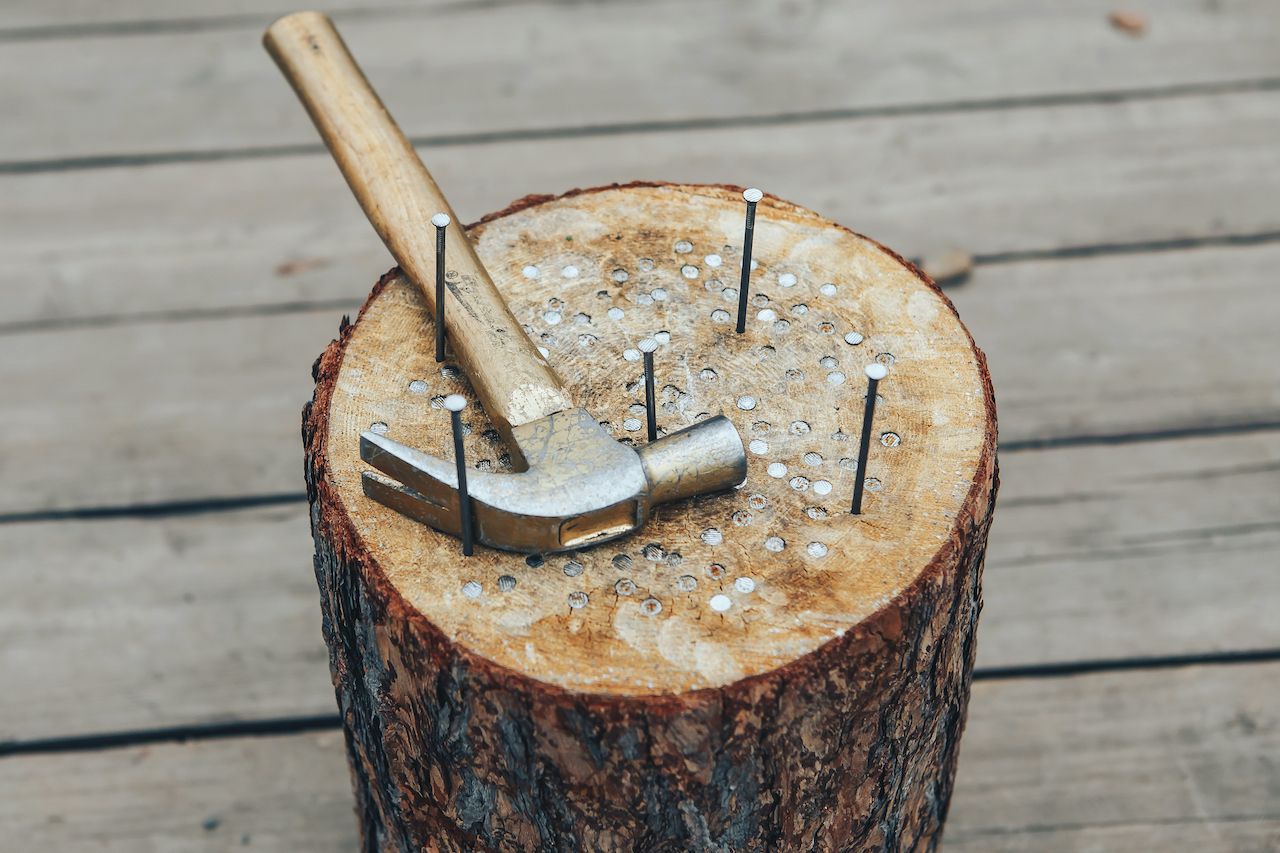 How many people: Limitless

Equipment you need: A stump or flat piece of wood, one nail for each person, one hammer

How to play: Stump is not for the faint of heart and takes a bit of coordination. First, each person hammers their nail slightly but solidly into the stump. The first player flips the hammer 360 degrees, catches it, and in one fluid motion from the catch tries to hit another player’s nail. Be sure to practice your toss a bit to make sure everyone is on the same page, but it’s easy enough to get the hang of it after a few tries. Each person has the option to either do a traditional toss or straighten their own nail without pulling it out.

A player is out when their nail is flat against the stump (including if the nail went sideways). That player then gets one retaliation shot. The last nail standing wins.

How to make it a drinking game: As you might have guessed from the original name of hammerschlagen, this game started in Germany — specifically, it started at Munich’s Oktoberfest in the early 1800s, so drinking was always a factor. This turns into a one-handed game when drinking is involved as it’s required to keep a drink in one hand at all times. Before each toss, take a sip of beer. Just be aware of yourself and those around you, because this game requires more hand-eye coordination than most. Also, wear close-toed shoes.

How many people: Two to four

How to play: Plant the stakes around 40 feet apart. Stand on the same side when playing with two people, or split each team so there’s one person on each side if playing with four people. Alternate throwing a horseshoe at the opposite stake. Anything within six inches is one point and a ringer around the stake is three. When counting out the points for each round, only the team with the closest horseshoe to the stake can earn points — if both have a ringer, they cancel out. Play to a set score of your choice. 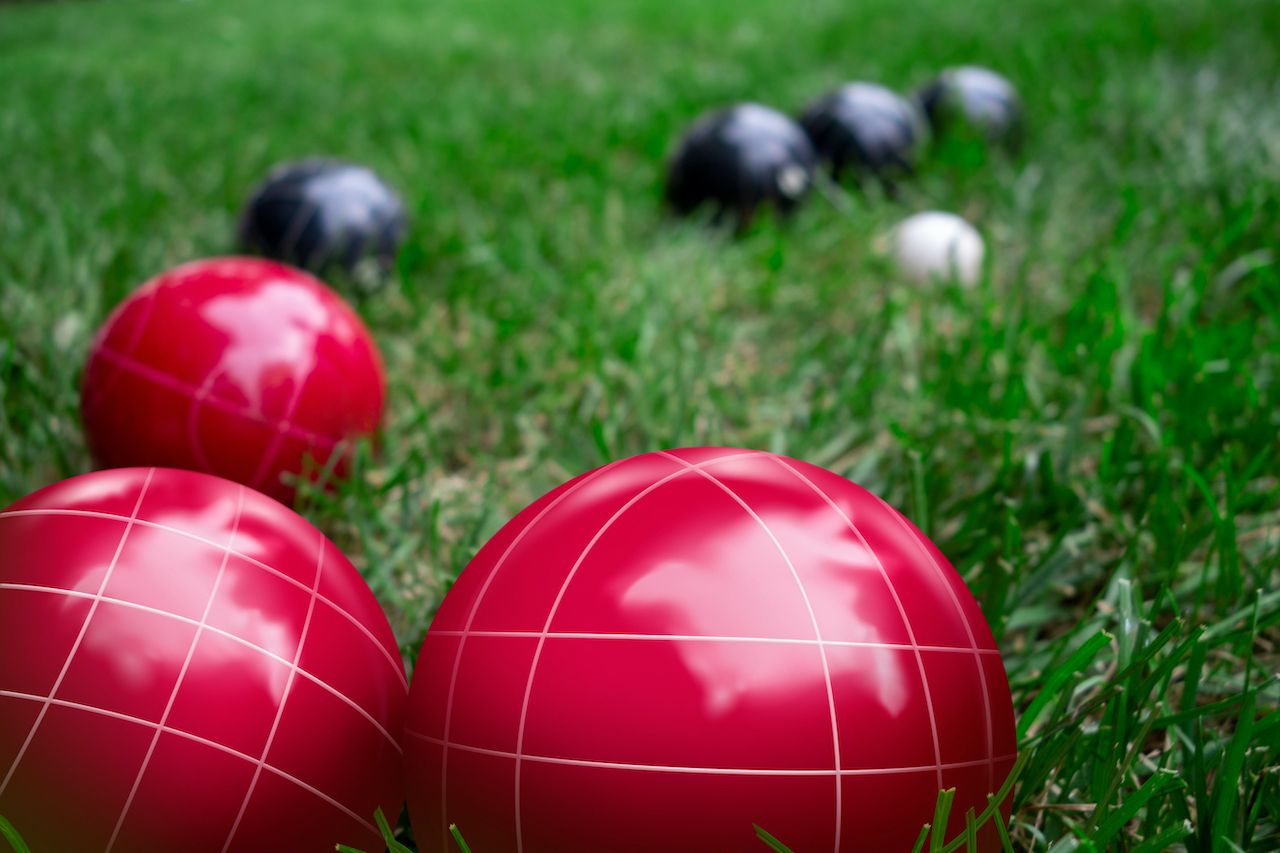 How many people: Two to eight

Equipment you need: Eight balls of the same size (four one color, four a different color), one smaller ball (called a pallino)

How to make it a drinking game: Bocce, like others on this list, is easily turned into a one-handed game when a drink occupies the hand not bowling. Each time a team gets closer to the pallino than the opposing team, that team has to take a sip. The losing team also takes a sip for every point scored against them.

How many people: Two to four

Equipment you need: Four oversized darts or other throwable object

How to play: Make a throwing line and, between 20 and 40 feet away, a circle with a center point. The first person or team lobs the dart from the throwing line, aiming for the center of the circle. Then the next person or team has a go. Three points are scored for hitting the center and one point for making it in the circle. Only the person with the most points for the round counts their points toward the final score. Play to 21.

How to make it a drinking game: Take a sip for the point differential as well as whenever the opposing team lands a dart in the center.

Culture9 Boardless, Cardless Games To Play Anywhere
Tagged
Outdoor
What did you think of this story?
Meh
Good
Awesome