The ‘80s were a special time. A time when only people who wanted to look rich had cell phones, MTV still played music, and drum machines ruled the airwaves. Those of us lucky enough to be alive during the heyday of Miami Vice and hairbands often long for the old days, and sometimes we wish there were ways to go back.

Well, this fall a convention in Southern California will return you to the Reagan years, when NostalgiaCon ‘80s hits the Anaheim Convention Center between September 28 and 29. To prep yourself, take the month of September off and follow in the footsteps of convention creator Manny Ruiz who trailblazed a 13-stop road trip from New York to LA. It traverses the best of ’80s America like JR Ewing’s mansion, Madonna’s birthplace, Katz’s Deli, and other historic sites. So clear your fall folks, because we’re going back…to the ‘80s! 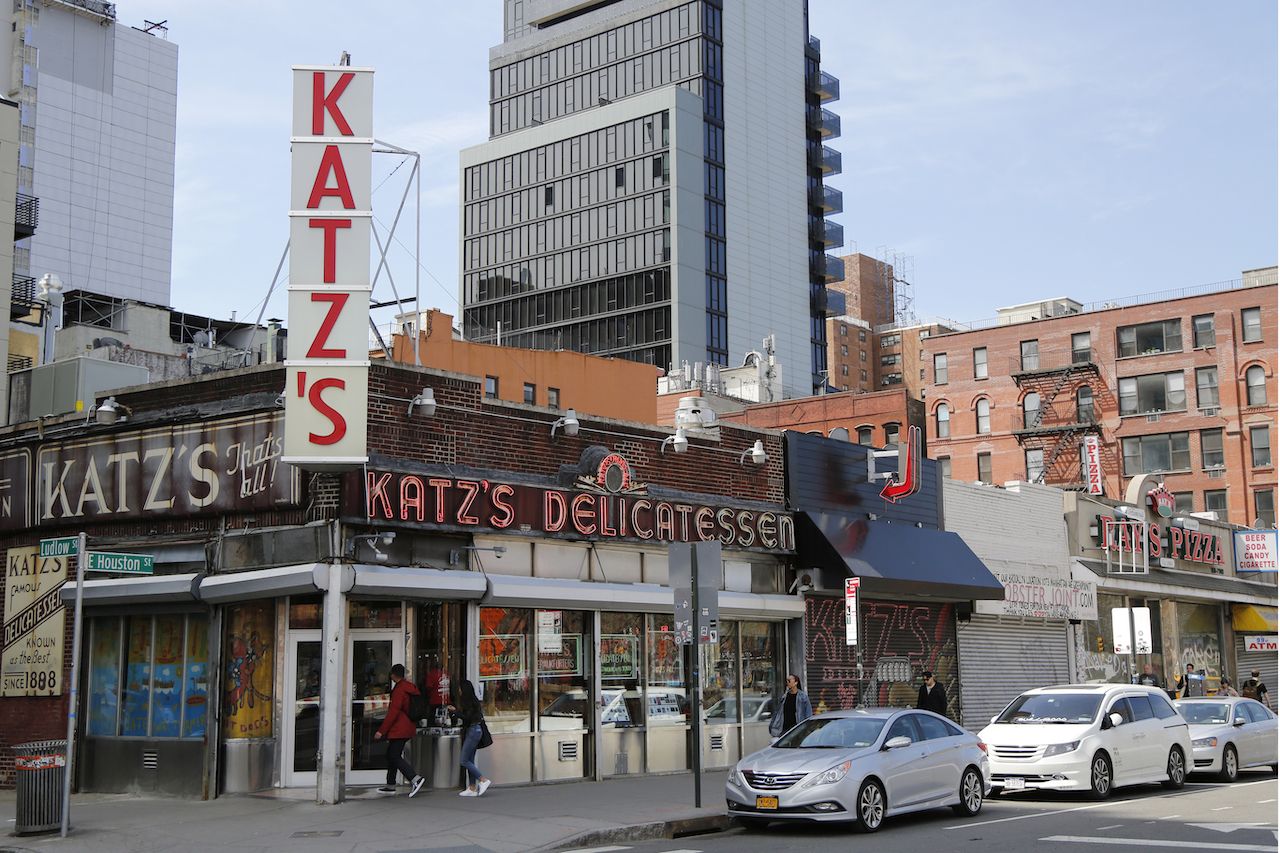 You can find nostalgia from any decade in the Big Apple, really. But the place that served as the backdrop for movies like Wall Street, Ghostbusters, and Do The Right Thing is full of locations that harken back to the era of “Greed is good.” In addition to buildings and storefronts, you can also stop into the John Varvatos store in the Bowery area that was once the fabled CBGB. For those not up on their punk rock history, that’s where bands like Blondie and The Ramones got their start.

From there, stop into Katz’s Deli, home of the fake orgasm scene in When Harry Met Sally, and for the love of god don’t be the nine millionth person to try and recreate it. After lunch, head up to Central Park West and pay your respects outside The Dakota, the apartment building where John Lennon was shot in 1980. Then visit the building where hip-hop was born at 1520 Sedgwick Avenue in the South Bronx. Granted, that famous party was in 1973, but it was the spark that led to the release of Rappers Delight in 1980. 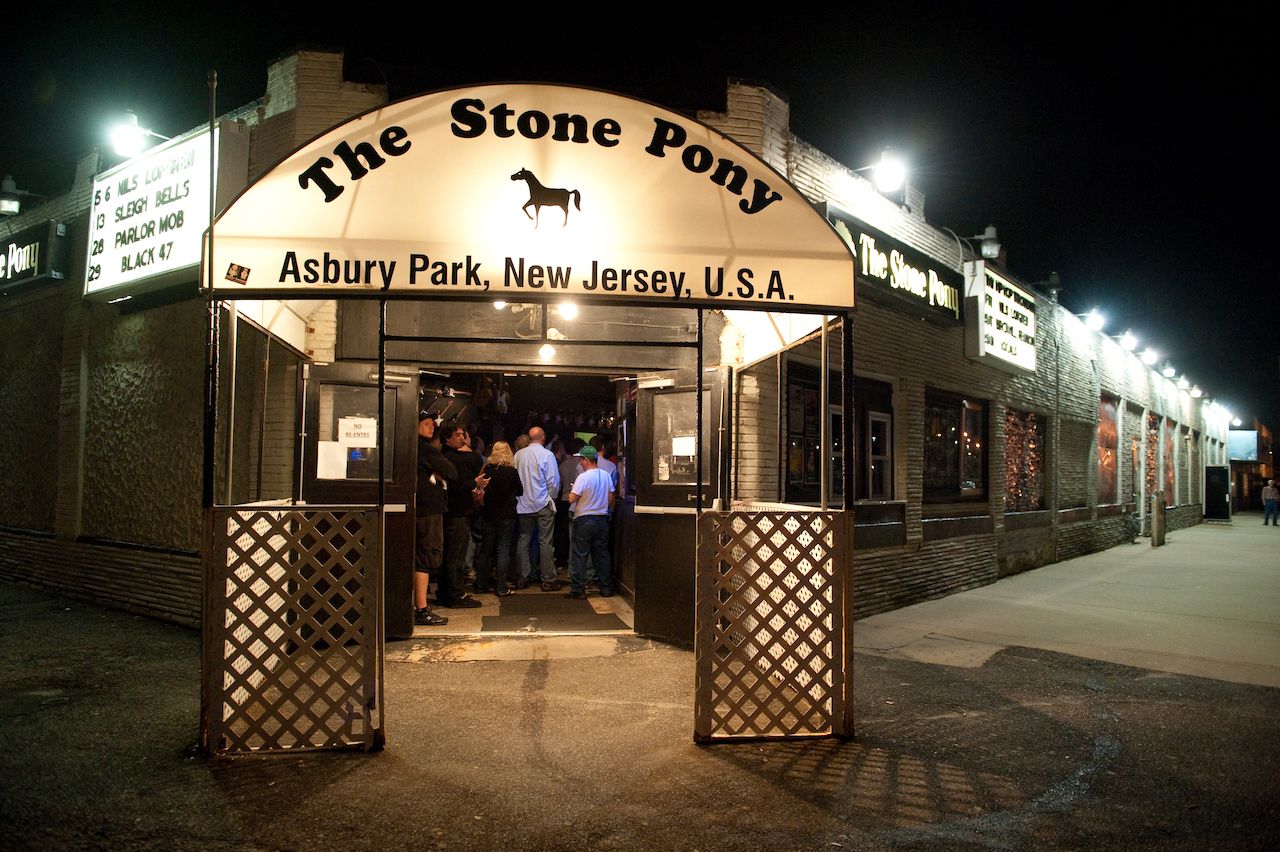 If you’re up for a quick dip into New Jersey, head into Asbury Park (one of the coolest towns in the United States) and catch a show at the Stone Pony, where Bon Jovi, Bruce Springsteen, and other ‘80s staples got their start. Another ‘80s legend, Whitney Houston, also began in the Garden State, and you can visit the church where she first performed at the New Hope Baptist Church in Jersey City. 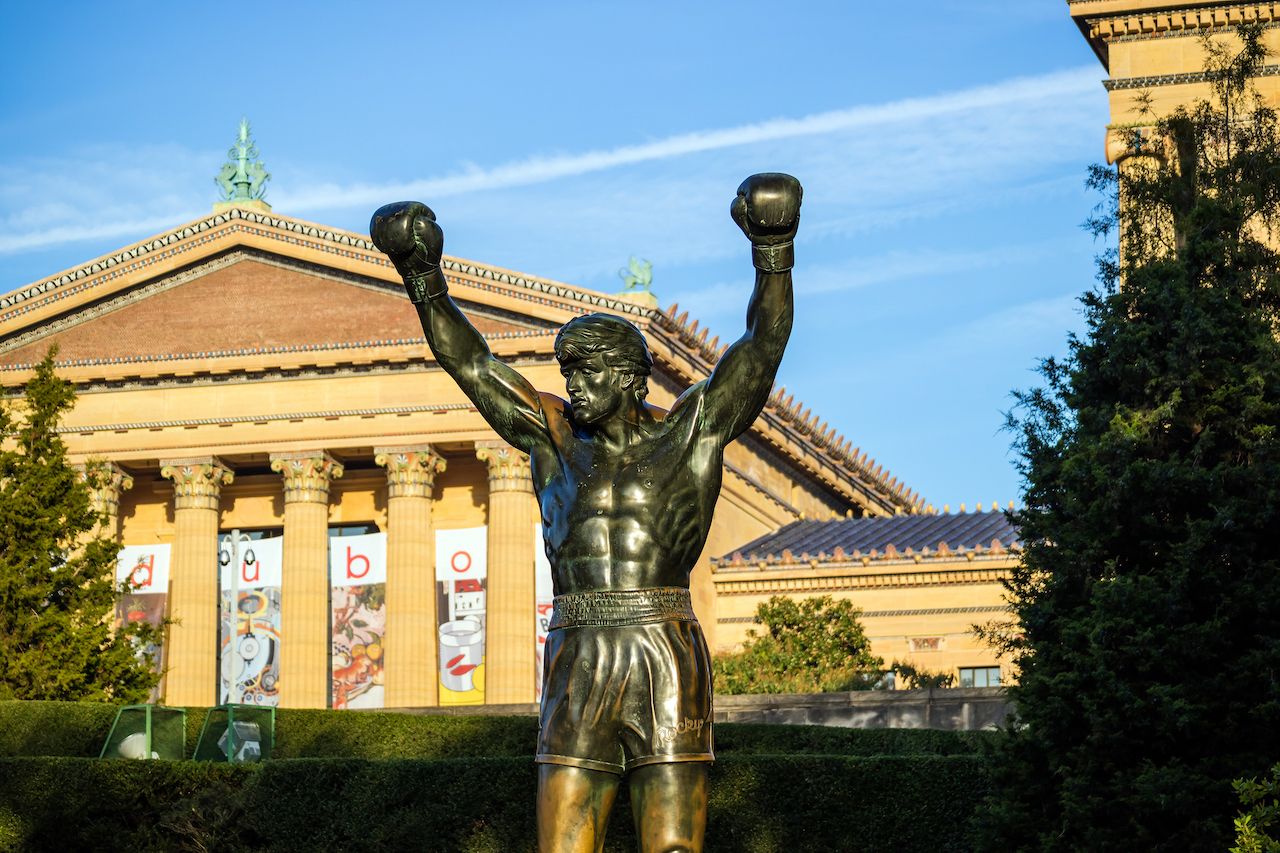 Though Bohemian Rhapsody might have made younger people believe Live Aid only happened at Wembley Stadium, the landmark 1983 concert also had a performance on this side of the Atlantic, at John F. Kennedy Stadium in Philadelphia. Phil Collins, Madonna, Tom Petty, and others performed there, which was demolished in 1992 to make way for Philly’s shiny new sports complex. Still, you can stand on the hallowed ground and play “We Are the World” at full volume pretending it’s 1983.

Get your daily workout in by running the 72 steps that lead up to the Philadelphia Museum of Art. Sure, the original Rocky movie came out in 1976, and the best one from the ‘80s took place in Russia. But Rocky III and IV still had scenes on the steps, and are as ‘80s as anything you’ll find in this city. 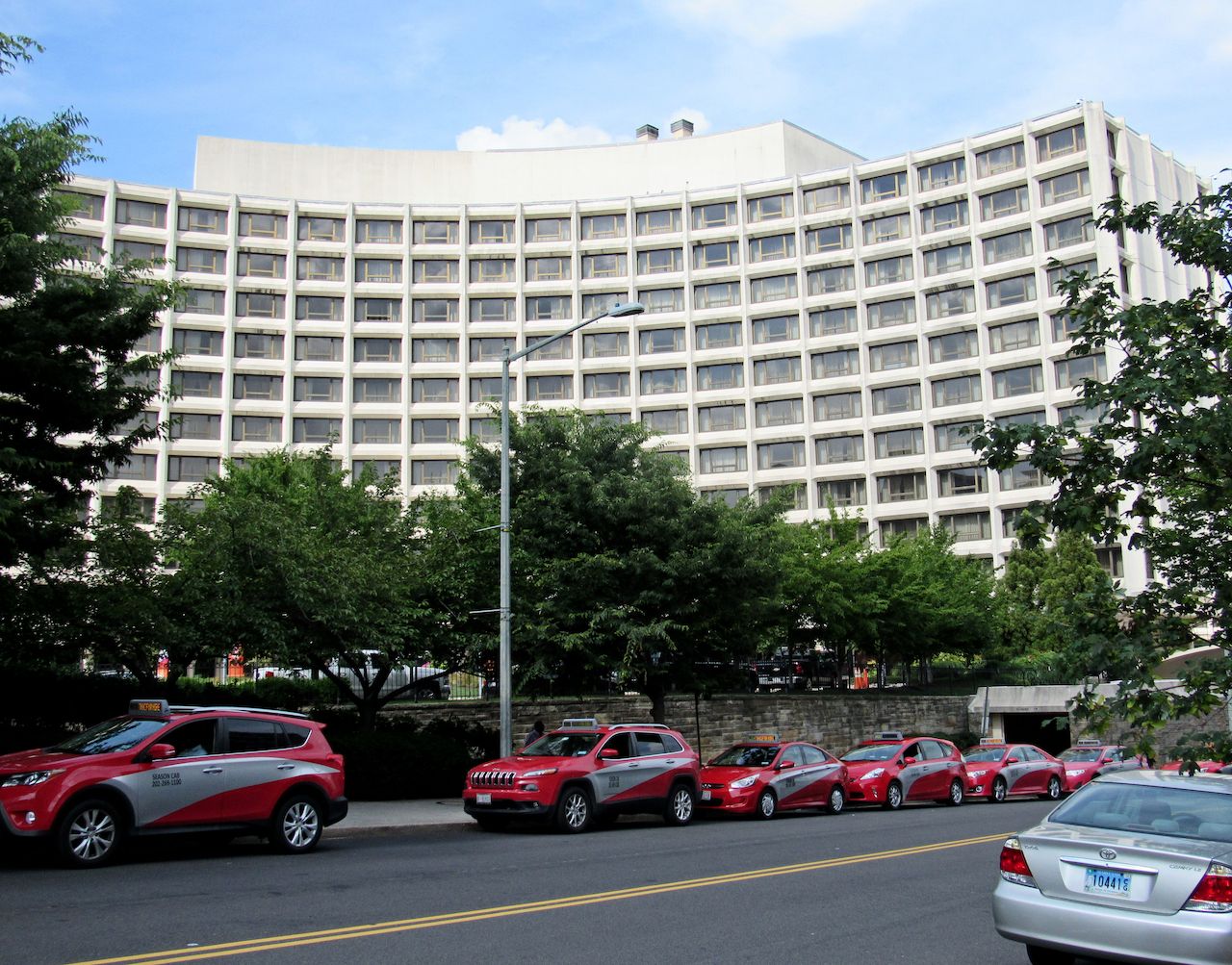 Not that we’d really want to be nostalgic for an attempted presidential assassination, but on March 30, 1981, John Hinkley attempted to shoot Reagan outside of the Washington Hilton hotel. The site of the last assassination attempt on a sitting president is still there. As is the Vietnam Veterans Memorial, whose opening in 1982 put a solemn end on a grim chapter in US history.

The Smithsonian National Museum of American History is also home to countless artifacts of American culture, the ‘80s included. Currently, there’s a superhero-themed exhibit that features original comic books from the ‘80s, including Captain America and Wonder Woman. 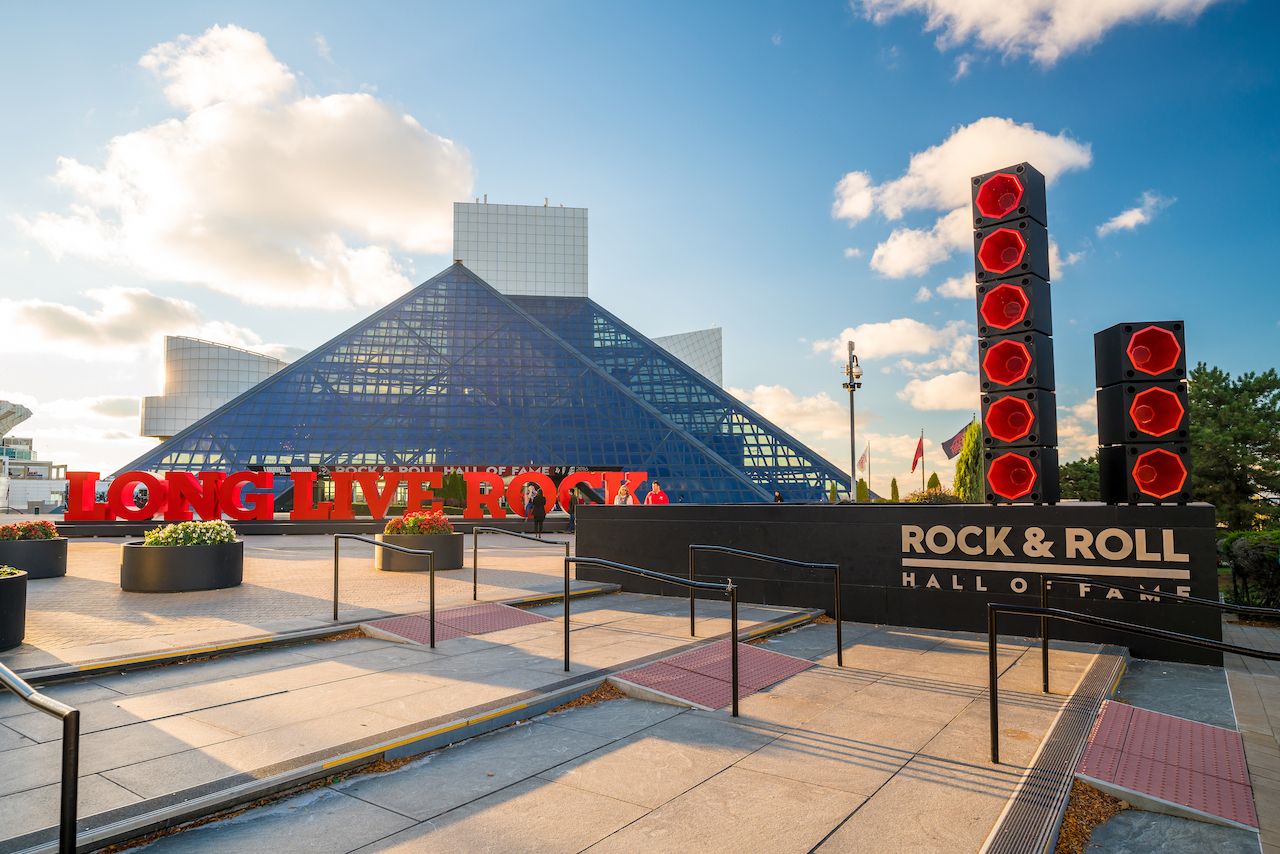 After a heavy dose of history, it’s off to Cleveland, where you can stick your tongue on a telephone pole and see if it sticks like the kids in the A Christmas Story. You can also visit the house the film was set in, and Higbee’s Department Store in downtown Cleveland. It’s now the Jack Casino.

Cleveland is also home to the Rock and Roll Hall of Fame, where you’ll literally spend hours perusing artifacts of the greatest bands to come from the ‘80s. This year’s inductees are especially ‘80s-inspiring: Def Leppard, New Order, and Janet Jackson. 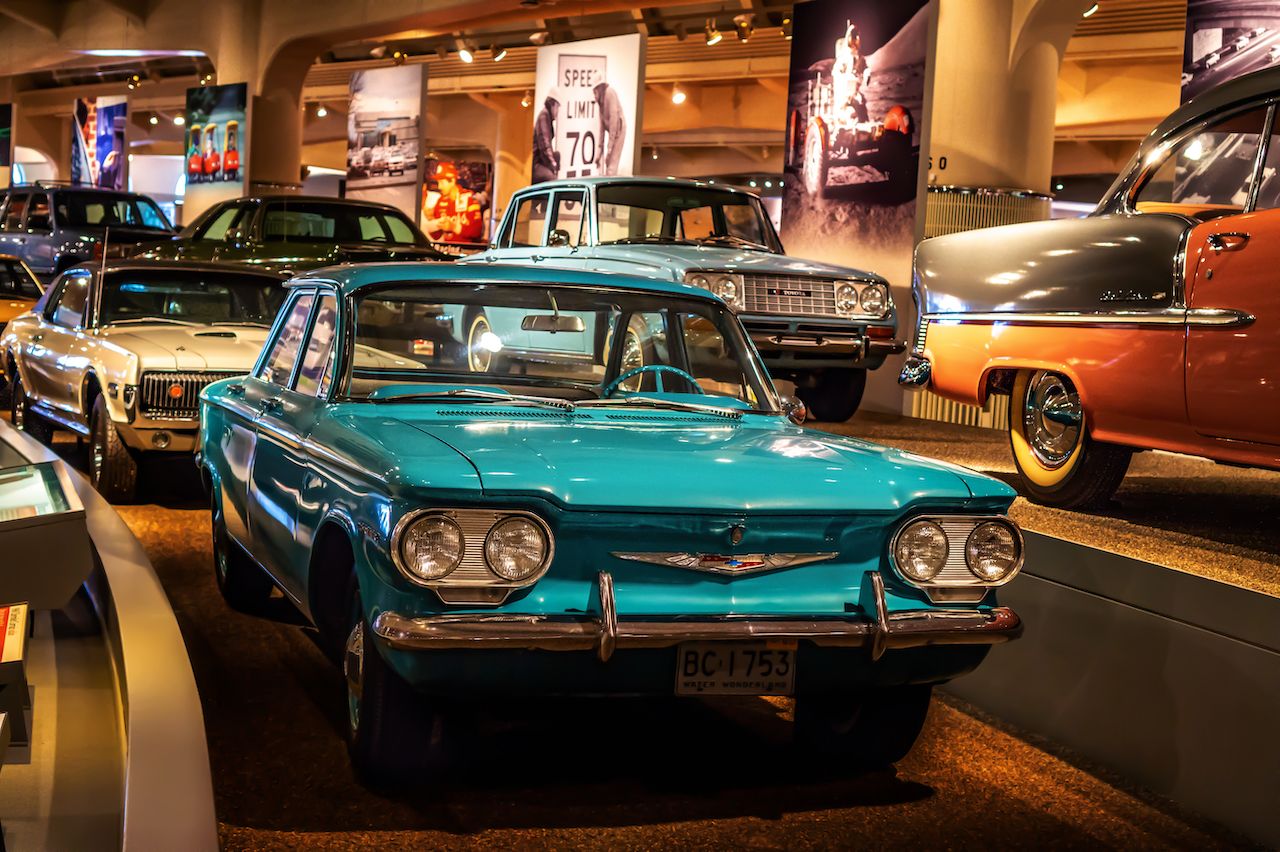 No pop star signified the Me Decade more than Madonna, who, before she moved to England and mysteriously gave herself a British accent, was a midwestern girl from Bay City, Michigan. You can visit her childhood home, the Calvary Cemetery where her mother is buried, and Rochester Adams High School, where Madge did her early learning. If you’re up for it, spend a night at Menjo’s, the gay club where Madonna danced early in her career.

For a nostalgic look at ‘80s automobiles, visit the Henry Ford Museum, chock full of technology and decorations from the era. It’s also home to Ronald Reagan’s Lincoln Continental, which he was using the day of the New York assassination attempt. 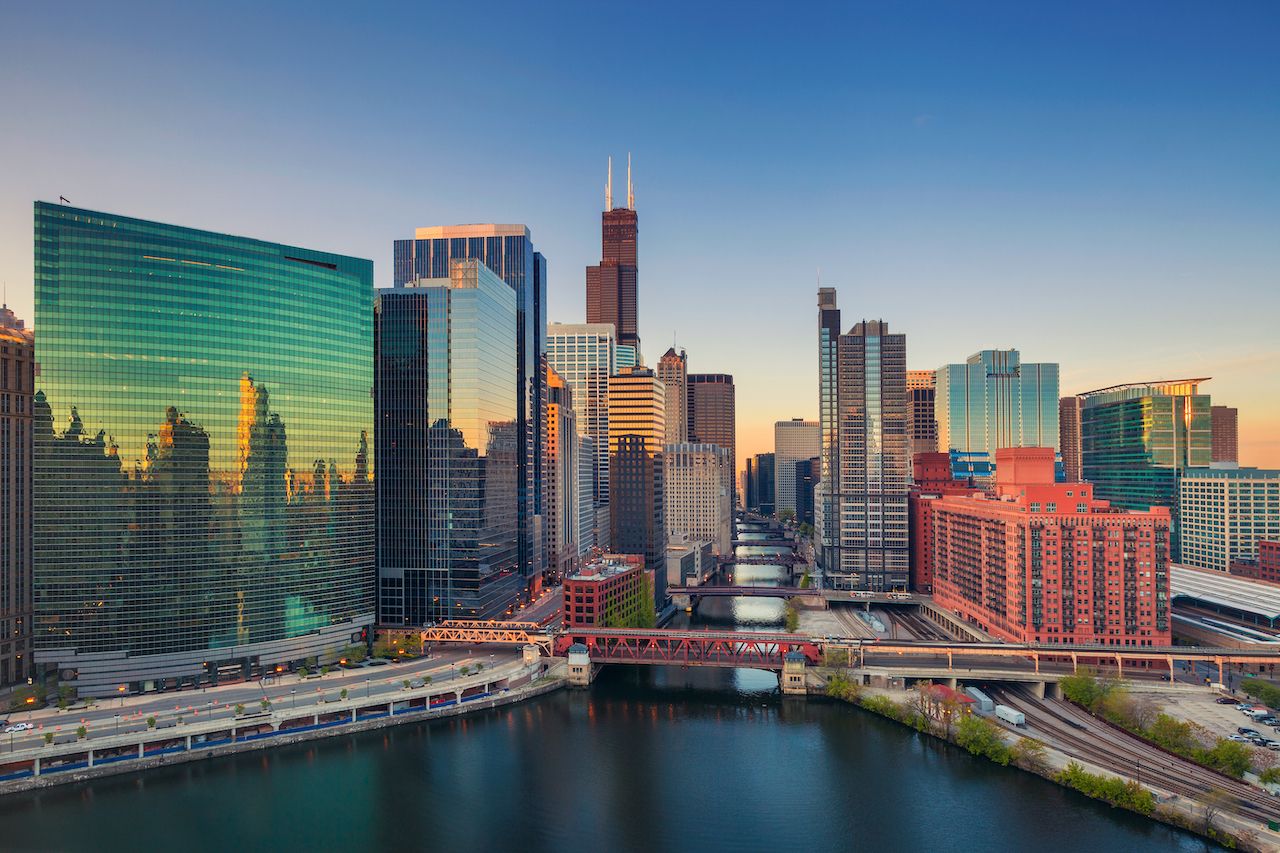 While you won’t be able to jump on a parade float and lead the city in a rousing rendition of “Twist and Shout,” you can still visit most of the filming locations from Ferris Bueller’s Day Off. That includes the Willis Tower Skydeck, where you can lean over the side with your hands back and get a picture of your silhouette from behind.

Continuing on the John Hughes tip, drive out to Glenbrook and visit Glenbrook North High School, which is not only Hughes’ alma mater but also the high school used in Ferris Bueller’s Day Off and The Breakfast Club. Back in the city, stop into Harry Caray’s Chicago Sports Museum, which in addition to some early Michael Jordan artifacts also houses the original hoverboard, sports almanac, DeLorean license plate, and self-tying sneakers from Back to the Future II. That film only missed predicting the Cubs’ World Series win by a year. 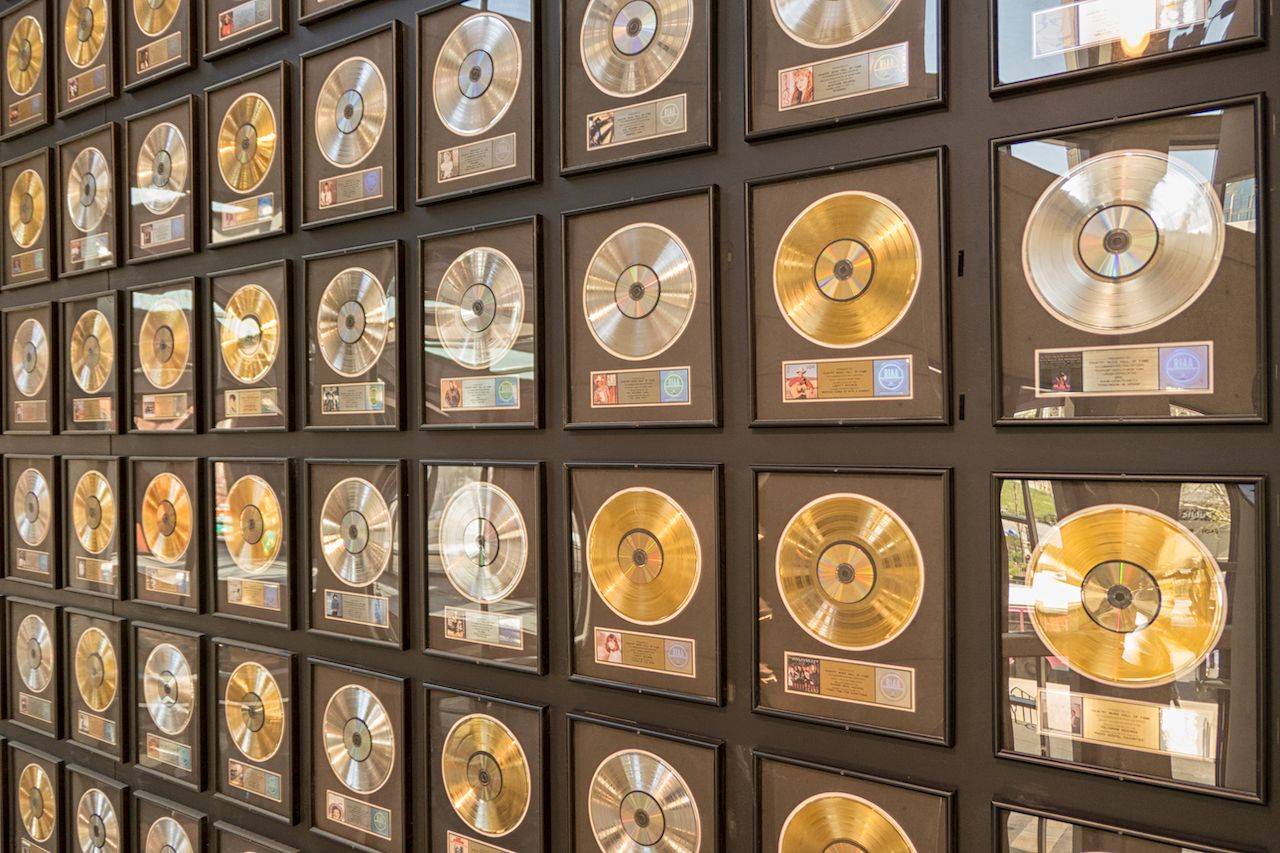 It’s a long drive from the Windy City to Texas, so take a night off and stop in Nashville. While it wasn’t too big a city back in the ‘80s, it does house Burt Reynolds’ Trans Am from Smokey and the Bandit at the Country Music Hall of Fame. 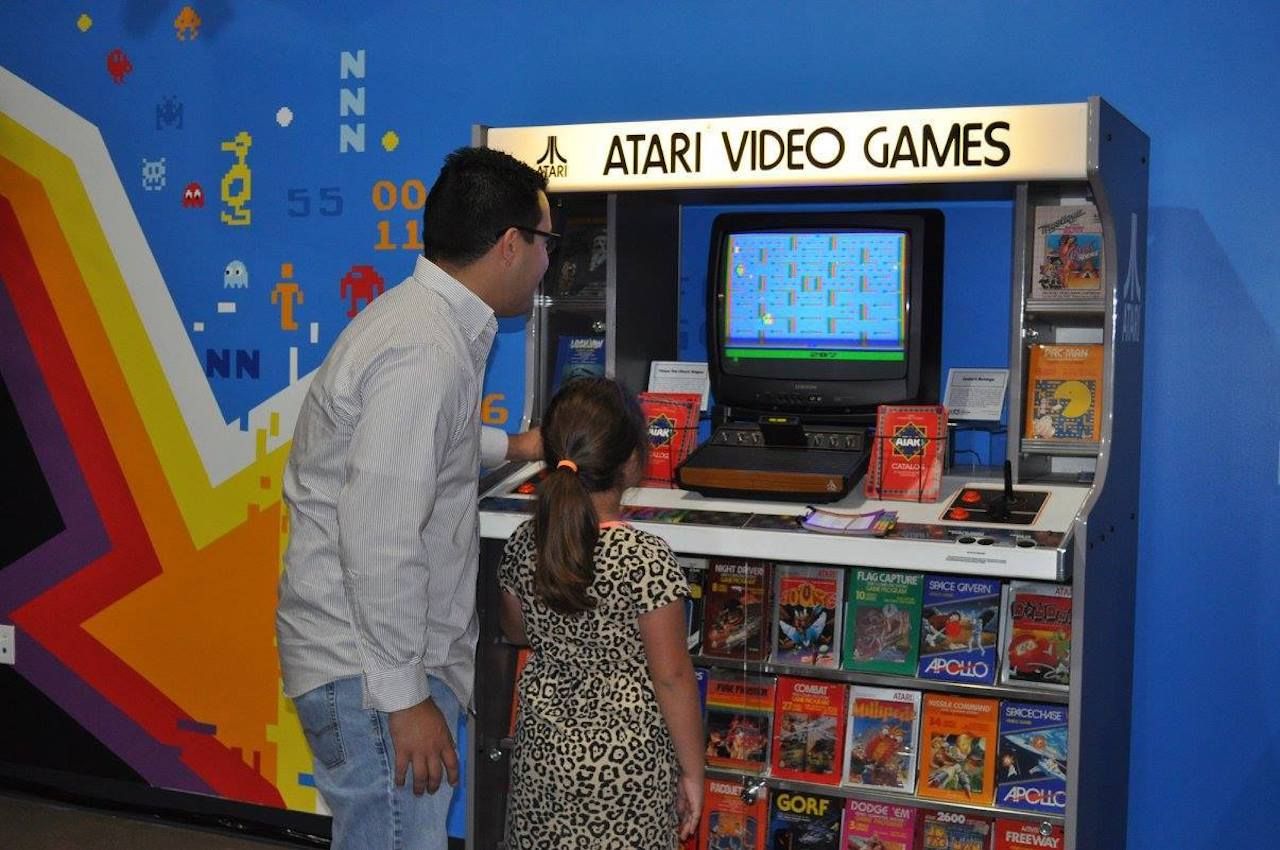 What would a trip back through the ‘80s be without stopping in Dallas, a city that gave the decade its most burning question? Turns out Kristin shot JR, and you can still visit the South Fork Ranch in Parker where the show was set for its entire run. Make sure to also tour the Dallas Museum, which has the prop pistol used to shoot JR and offers tours of the Ewing Mansion.

After that, spend a few hours at the National Videogame Museum in Frisco. You can relive your glory days of Donkey Kong and Duck Hunt, and learn how the iconic video game systems of the ‘80s came to be.

You may also wonder why we skipped over RoboCop during the Detroit portion of the trip. Well, fun fact, that movie was actually shot in Dallas because producers believed it had “grittier skylines” than Detroit. 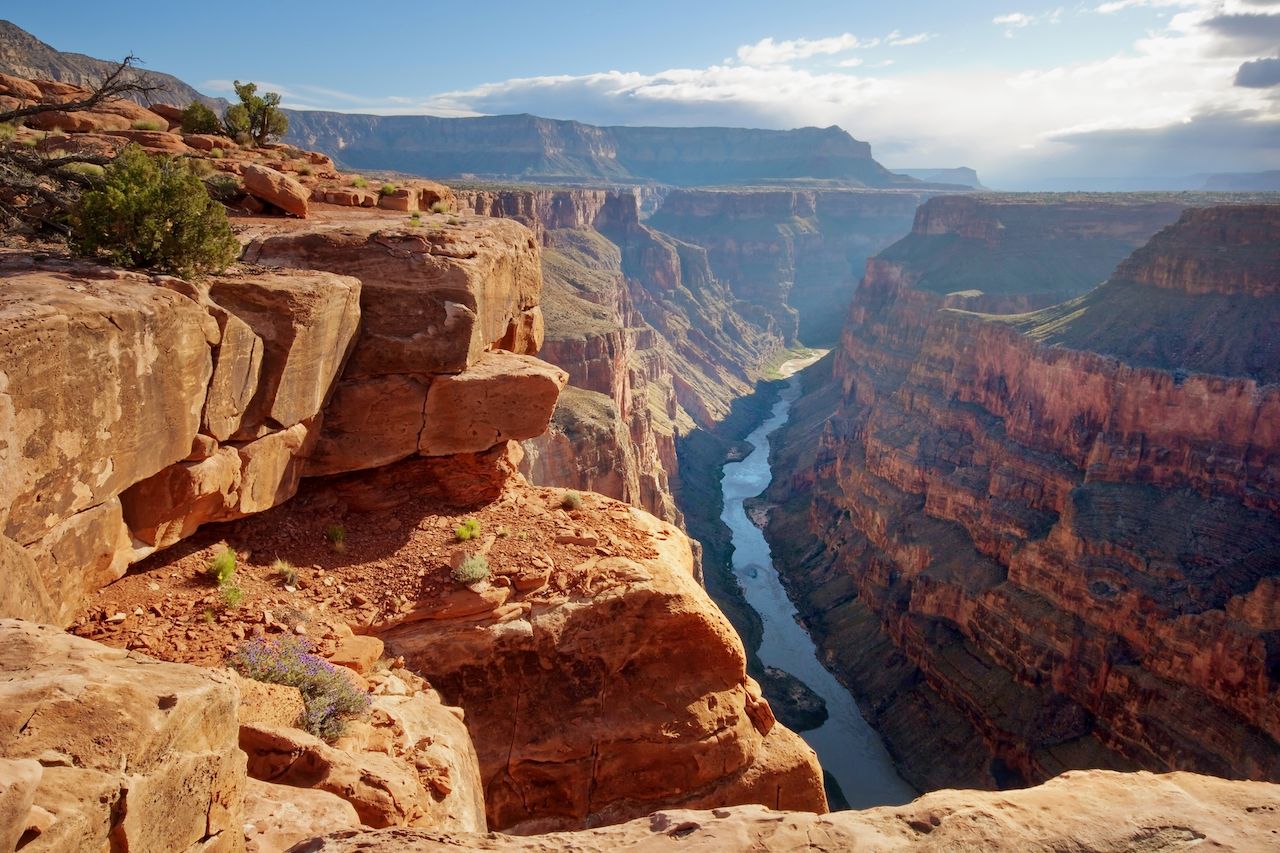 Just like the Griswolds, your ‘80s road trip vacation absolutely must include a stop at the Grand Canyon. Hopefully, it’s not because your car died in the desert and a crooked mechanic took all of your money. Even if that does happen, please try not to take money from any motel cash registers. 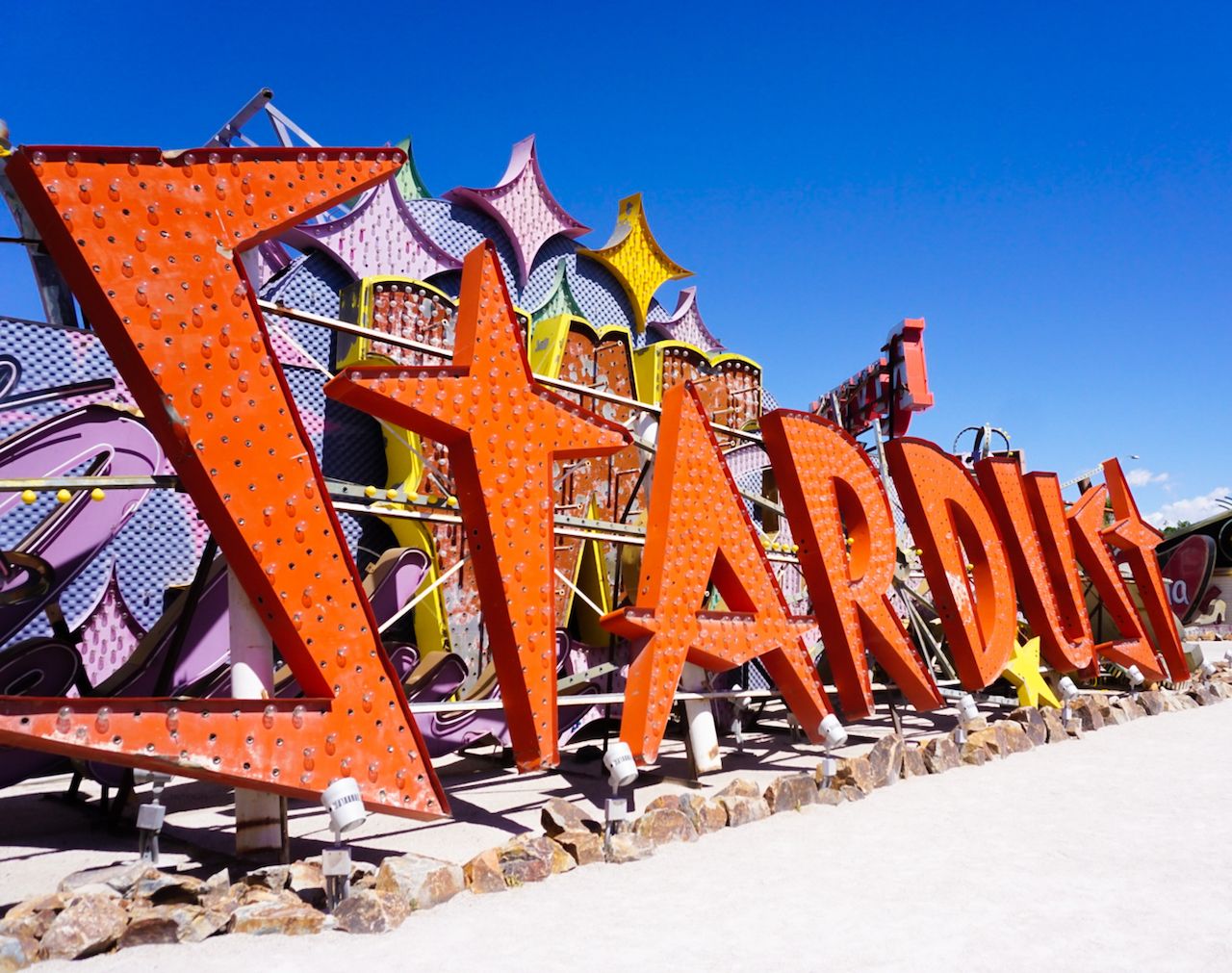 See where the Rain Man really put his skills to best use and play some Blackjack at Caesars Palace before hitting the Pinball Hall of Fame. There you can relive the wasted hours of your youth banging on machines like Indiana Jones, Q-Bert’s Quest, Spy Hunter, and Taxi. You’ll find over 152 machines inside, ranging from the 1960s to present day. Make sure to also stop into the Neon Museum to see the signs that lit up the Strip 30 years ago. 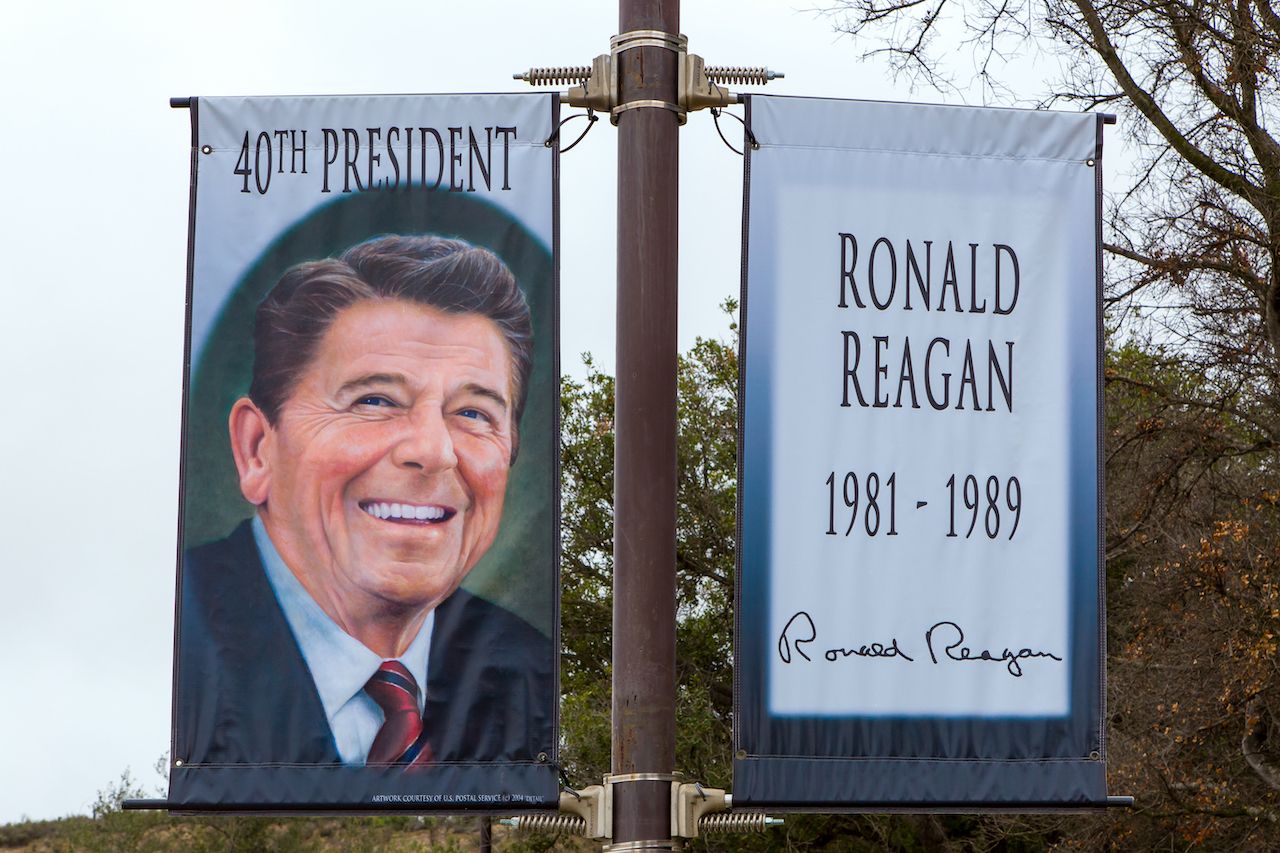 Before delving head deep into Hollywood, make a pitstop at the ultimate ‘80s museum for historical buffs, the Ronald Reagan Presidential Library. Here you can look at artifacts from his days in the White House, as well as pay your respects at his and Nancy’s burial sites. 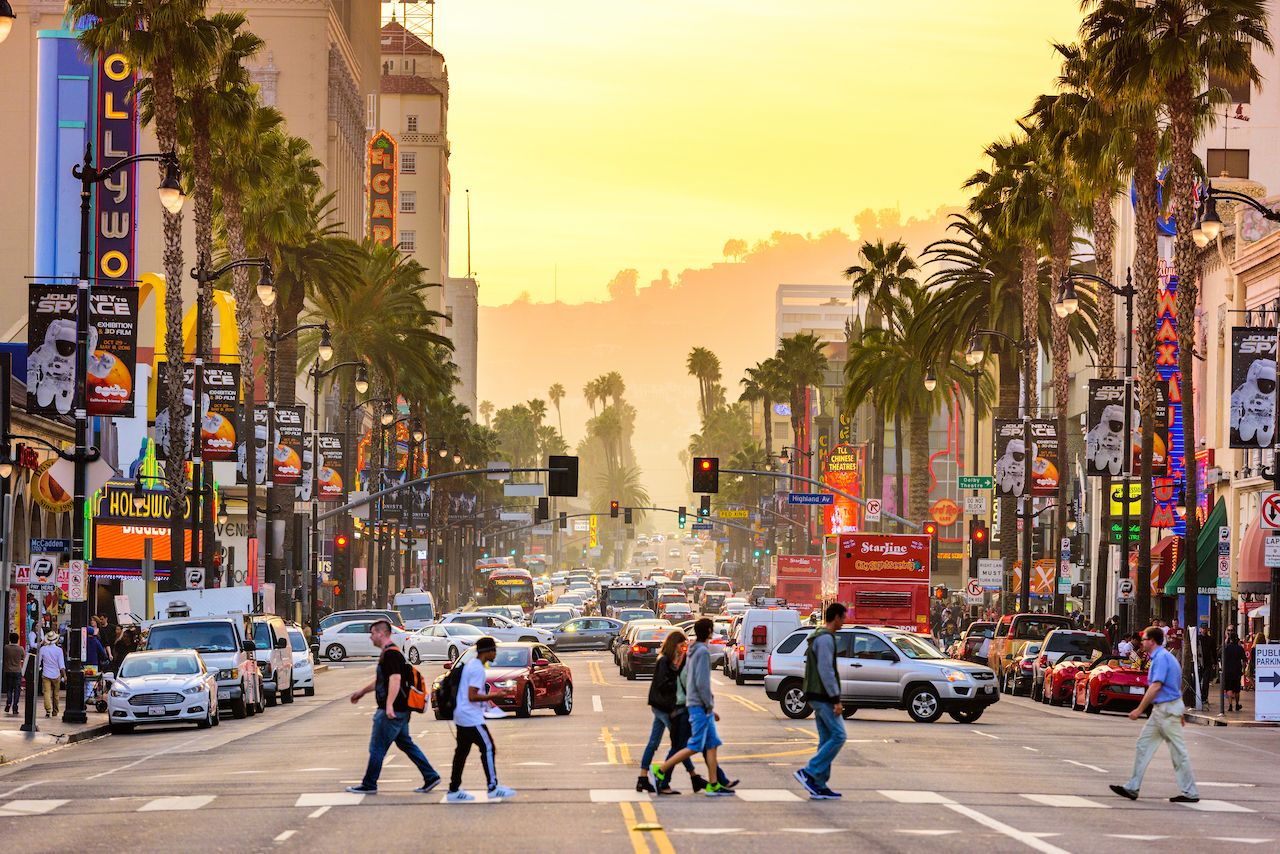 Before hitting the convention in Anaheim, take some time to tour around the ultimate collection of ‘80s nostalgia sites in LA. Houses from Pee Wee’s Big Adventure, Poltergeist, The Karate Kid, and Pretty in Pink are all here. Even The Golden Girls, which was set in Miami and had a model house at Disney’s Hollywood Studios in Orlando, has its original house in LA, just a few blocks off Sunset. You can also cruise by the sites from Fast Times at Ridgemont High in the Valley, like Van Nuys and Canoga Park high schools, and the still-operational Sherman Oaks Galleria.

No trip to the ‘80s is complete without Bayside High, and you can get your Kelly Kapowski on at Saved by the Max, a restaurant modeled after the famous burger joint in Saved by the Bell. Not sure what Dustin Diamond is up to these days, but you don’t know that he won’t show up.

After a few weeks on the road, you’re primed for the NostalgiaCon ‘80s convention, which will feature appearances from MTV VJ Mark Goodman, Val “Iceman” Kilmer, the Sugar Hill Gang, and other icons of ’80s pop culture. It might not transport you back to the era of crimped hair and neon spandex, but it’ll help you remember the good times. And after all, isn’t that what nostalgia is all about?

MoviesWhere To Travel According To Your Favorite Disney Princess
Tagged
Entertainment Road Trips Trip Planning United States
What did you think of this story?
Meh
Good
Awesome