The Day of the Dead, or Día de Los Muertos, may take place around Halloween and share many of its macabre themes, but it’s not simply “Mexican Halloween.” While Halloween is defined by spooky costumes, haunted houses, and horror movies, Día de Los Muertos revolves around embracing death rather than fearing it. Through the decoration of altars — called ofrendas — with photos, flowers, candles, and personal items, the holiday is meant to be a celebration of deceased loved ones and a way of keeping their memory alive.

Initially an Aztec holiday dedicated to the goddess of death, Día de Los Muertos later merged with the Catholic All Saints’ and All Souls’ Days once the Spanish came to the New World. Now, the holiday has grown in popularity — Pixar’s smash-hit Coco probably had something to do with that — and it’s not just Mexicans taking part in the emotional festivities. Cities across the United States are hosting Día de Los Muertos events, complete with an array of colorful traditions. Here are a few cities where you won’t want to miss out on celebrating the Day of the Dead. 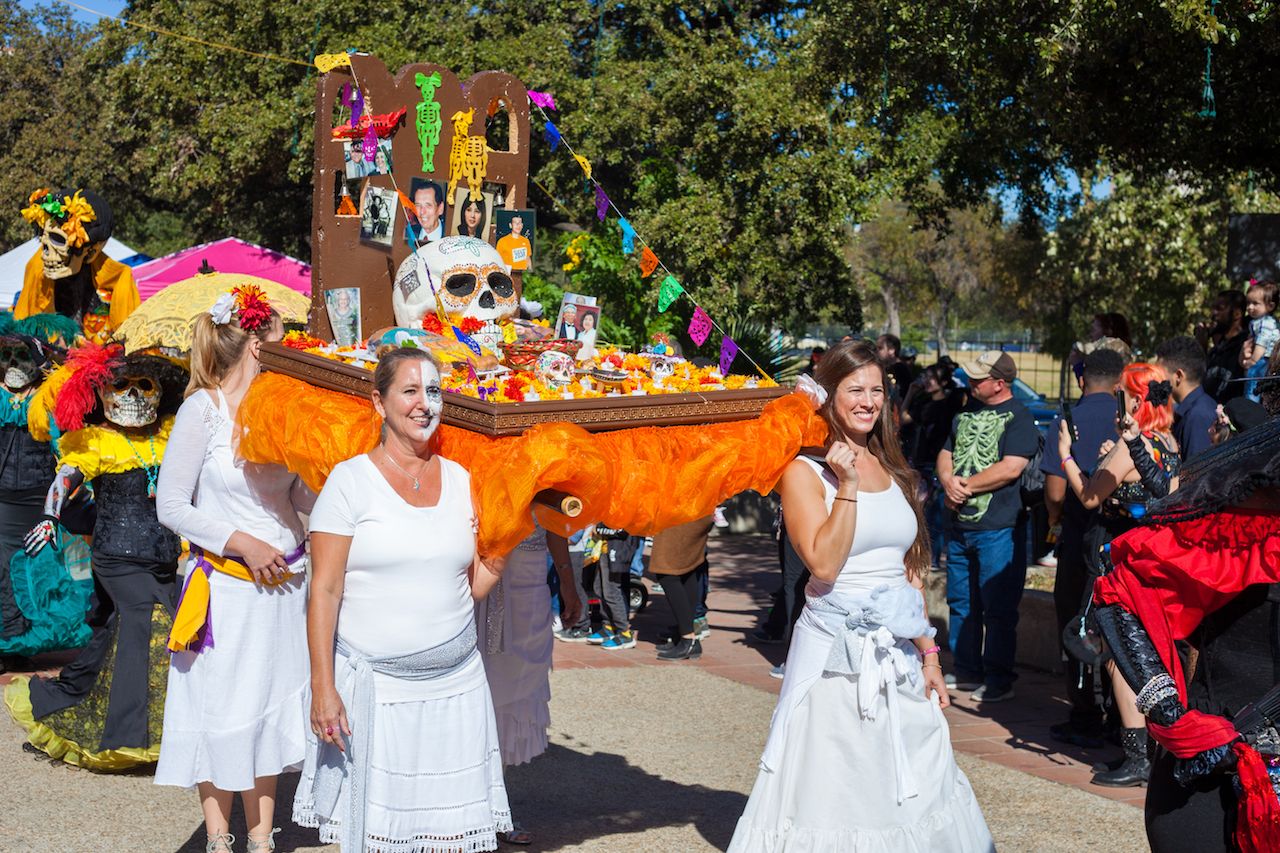 It comes as no surprise that San Antonio, one of the country’s major bastions of Mexican culture, also hosts one of the best Día de Los Muertos celebrations. Taking place in the La Villita Historic Arts Village, a market for local artists, the Day of the Dead celebration features traditional Aztec dancing, puppeteer shows, original Day of the Dead art, and a parade of ornate altars. To play an active role in the festivities, you could take part in the altar-building contest or sign up for a workshop. The Que Vivan Los Muertos! workshop, for example, is an educational experience that gives you a summary of the history and symbolism of Día de Los Muertos and includes flower-making, mask-making, and sugar-skull decorating. Check out the full schedule here. 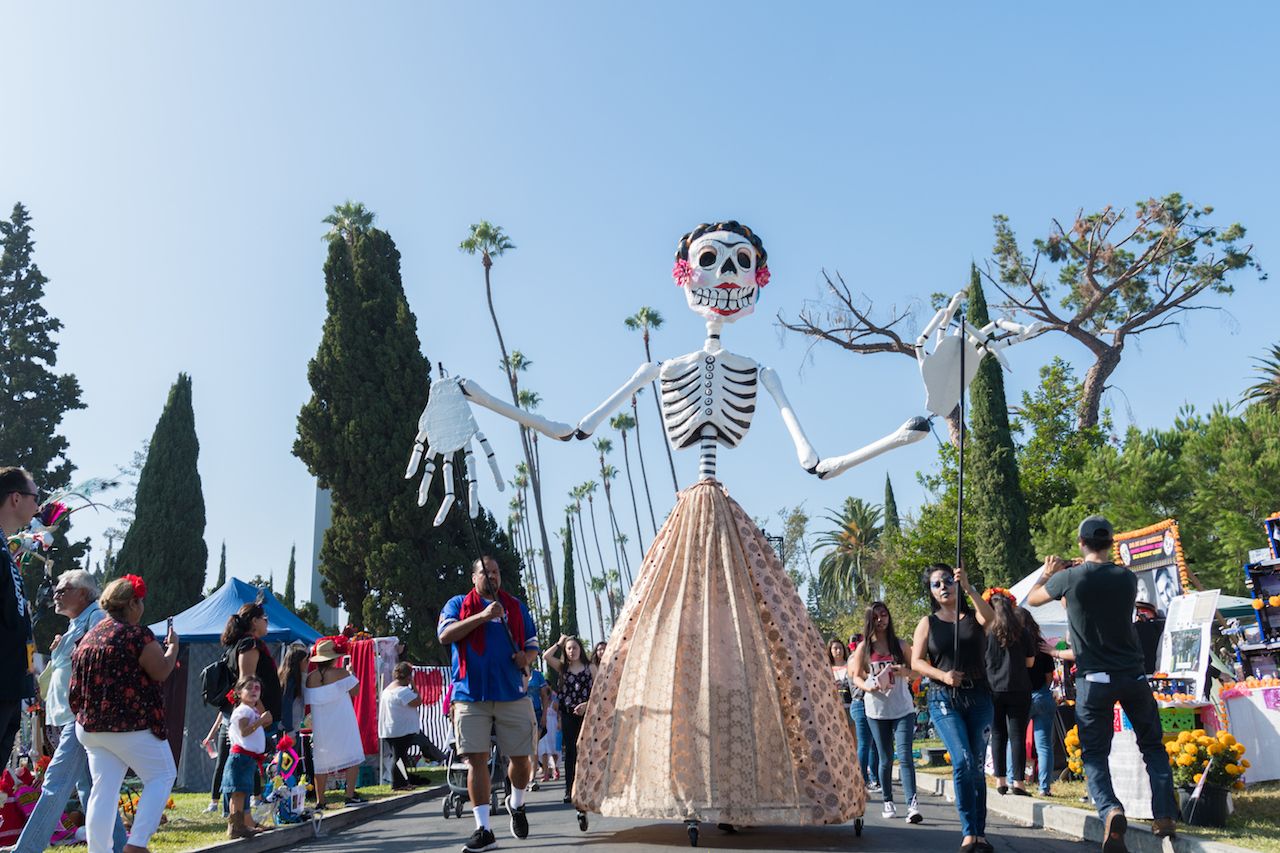 Los Angeles’s Día de Los Muertos celebration takes place on the historic Calle Olvera, a tree-lined Mexican market street with taco, fruit, and churro stands. The authentic setting is appropriate for this colorful celebration, which is famous for the processions that occur each night. Called Novenario, or “parades of the living dead,” these processions are opportunities for people to honor dead loved ones by marching with bowls of burning incense, carrying huge photos of the deceased, and dressing in colorful costumes. Following each procession, a hot chocolate drink called champurrado and pan dulce (sweet bread) are distributed to the crowd. A particularly unique aspect of LA’s Día de Los Muertos celebration is the Carrera de Los Muertos on October 27, a 5K run to honor the deceased during which runners paint their faces like sugar skulls.

Fort Lauderdale’s Florida Day of the Dead celebration is defined by its unforgettable Skeleton Processional parade, which begins at Huizenga Plaza. A tribute to traditional Mexican cultural rituals, the parade also integrates elements of Florida’s own unique aesthetic, like alligators, sea turtles, pirates, and mermaids (all in skeleton form of course). But it’s not just animals who get the skeletal treatment; there are also skeleton-clad humans and floats featuring giant skeleton puppets. The celebration also offers lessons on traditional folkloric dancing, puppet and mask-making workshops, and a craft session on how to make milagros — a religious folk charm.

Chicago’s Day of the Dead celebration is unique in that it isn’t set up on a street packed with floats, costumes, food, and dancers but at The National Museum of Mexican Art. Given the venue, Day of the Dead Xicágo is one of the country’s more educational options for celebrating Día de Los Muertos, with a fully immersive experience. The area surrounding the museum will feature displays that visually tell the holiday’s history, and the museum itself will be illuminated with projections of departed loved ones. The nearby Harrison Park soccer field will be transformed into a plaza filled with altars, which visitors are encouraged to decorate and bring to the festivities. Live performances, art activities, and face painting will also be offered. 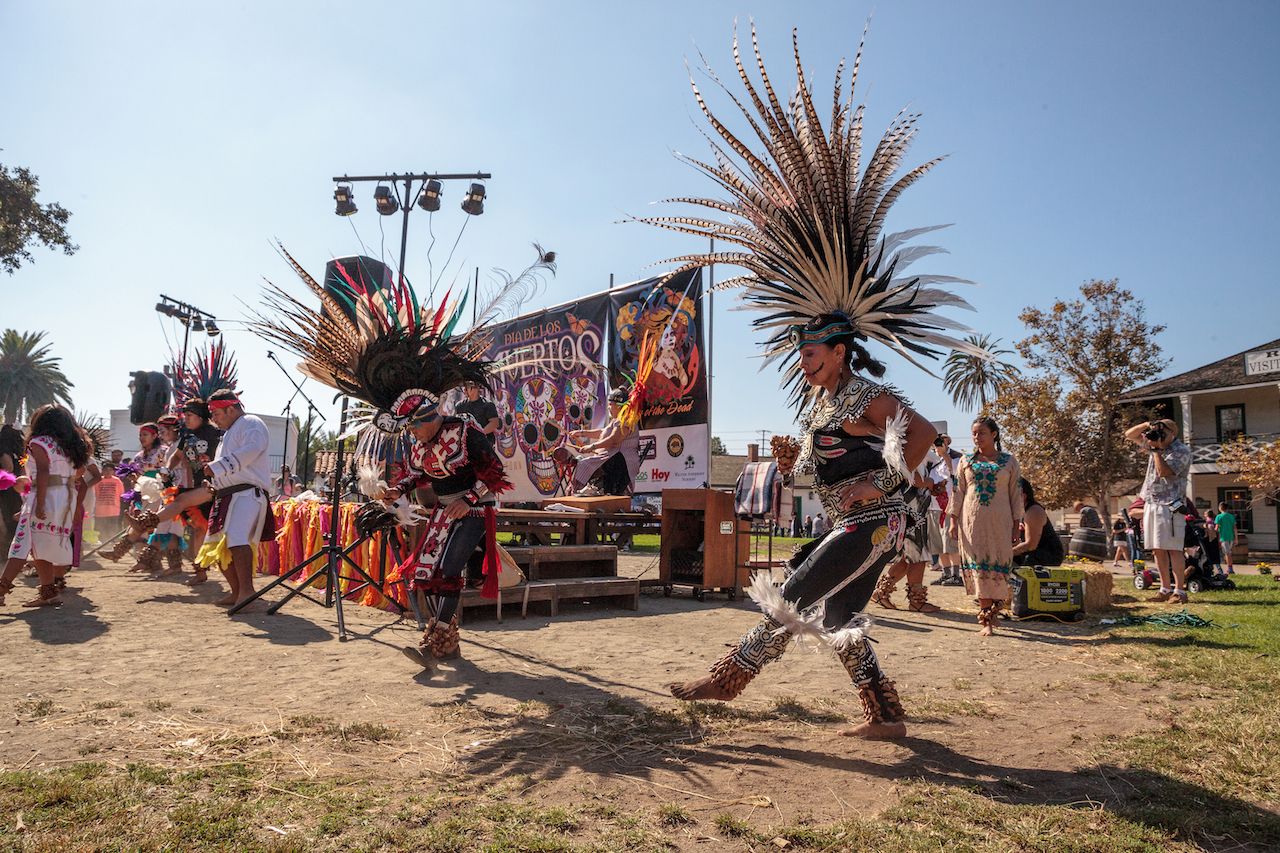 Unsurprisingly, San Diego is deeply rooted in Mexican culture. Given it’s close proximity to the Mexican border, this might be the most authentic Día de Los Muertos celebration in the US. Taking place in San Diego’s Old Town, the festival features student mariachi bands, Aztec dancers, traditional costumes, and an afternoon parade that really integrates the entire community. In addition to the festivities, there’s also a fascinating educational element. Consistent with the theme of family and tradition, a team of family history specialists will be on hand to help visitors trace their family histories and shed light on their ancestry.

36 Hours in Oaxaca, Mexico
Tagged
Religion Insider Guides United States
What did you think of this story?
Meh
Good
Awesome