Over the last 50 years, Bangkok has transformed from a languid city of canals to a pulsing metropolis of 10 million people, and one of the most popular destinations for party-ready tourists. Standing among downtown’s towering skyscrapers and modern shopping malls, “Venice of the East” likely isn’t the first slogan that comes to mind to describe the Thai capital. But across the Chao Praya River, a quiet Bangkok still exists in the district of Thonburi. Walking through this district on the city’s west side is a great way to meet locals outside of the hustle and bustle of Khao San Road and the rest of downtown for a day. Thonburi has spectacular temples and busy markets — it wouldn’t be Thailand without them — but enjoying the mellow atmosphere along the narrow streets is the main reason to visit. Here’s how to walk your way through Bangkok’s quietest neighborhood.

A walk on the non-wild side 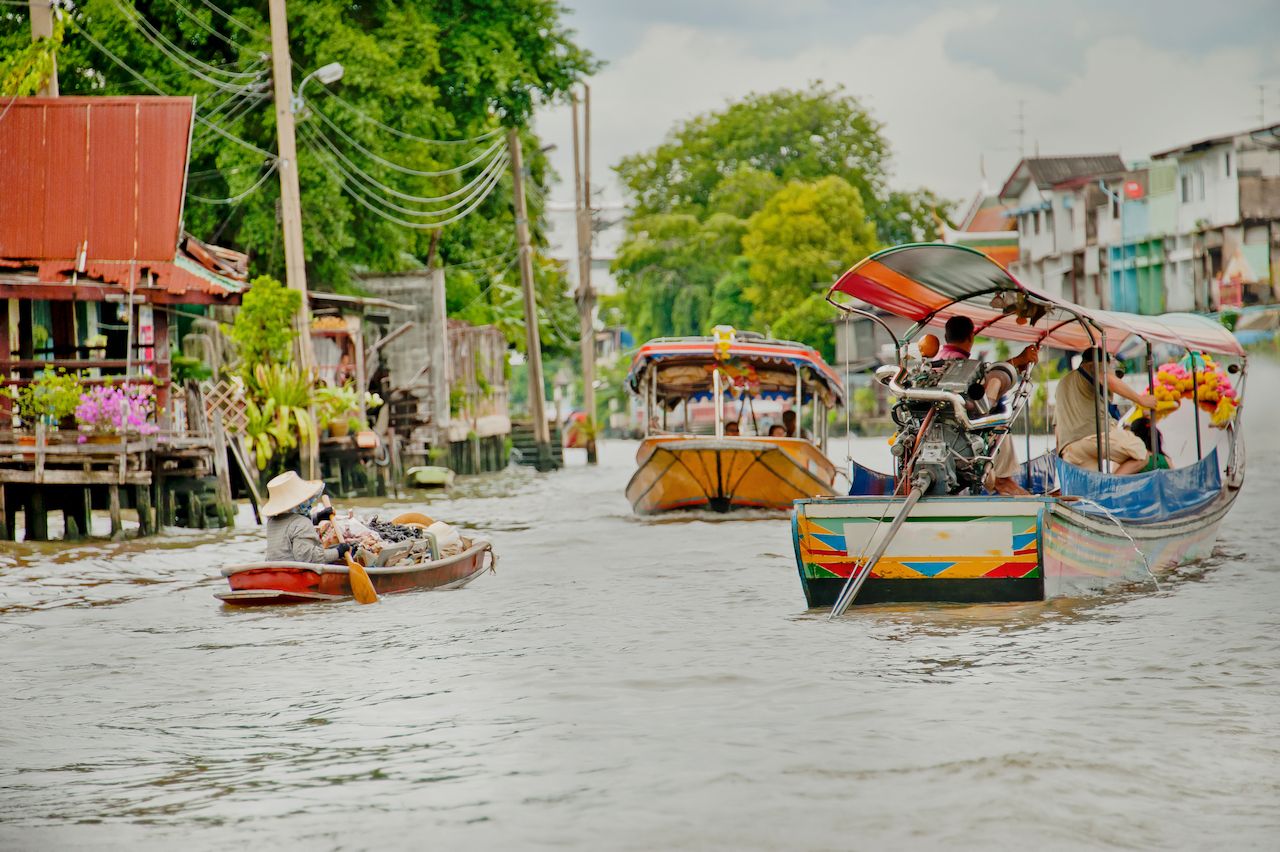 To start this walking tour, take the BTS Skytrain from downtown to the Wutthakat station. From the elevated BTS platform, looking back toward the skyscrapers of the city, you can see an 80-meter-tall white pagoda. The pagoda is at Wat Paknam, one of the most popular sights on this part of town, and it serves as a handy reference point along the walk. In the morning, residents of Thonburi congregate in the street markets to buy groceries while monks walk the narrow alleys collecting alms. You’ll see children dressed in neat uniforms walking hand-in-hand with their parents on the way to school, and retirees sitting over a newspaper and a cup of tea.

Descend to the street and walk about 500 meters north along Kallaprapruk Alley to Wat Nang Chi Chotikaram, which you’ll notice from afar — two temple buildings surrounded by six white stupas are hard to miss. It’s beautiful, but temple fatigue is a serious thing in Thailand, so it’s best to view this one from the outside and move on. There are more impressive temples along this walk, including Wat Nak Prok right around the corner. Constructed in 1748, Wat Nak Prok has undergone a recent makeover but the interior of the two main prayer rooms retain the look and vibe of the original setting. Step inside the first temple to see a golden Buddha and colorful murals painted on the walls and ceilings. In the adjacent building, a Buddha statue rests atop a polychromatic three-headed dragon.

Next, walk east to the Phasi Chareon canal and follow it toward Wat Paknam. This 15-mile canal (don’t worry, you’re not walking the whole thing) was constructed in 1866 to connect Thonburi to nearby rural villages during a time when the area was still mostly jungle and swampland. 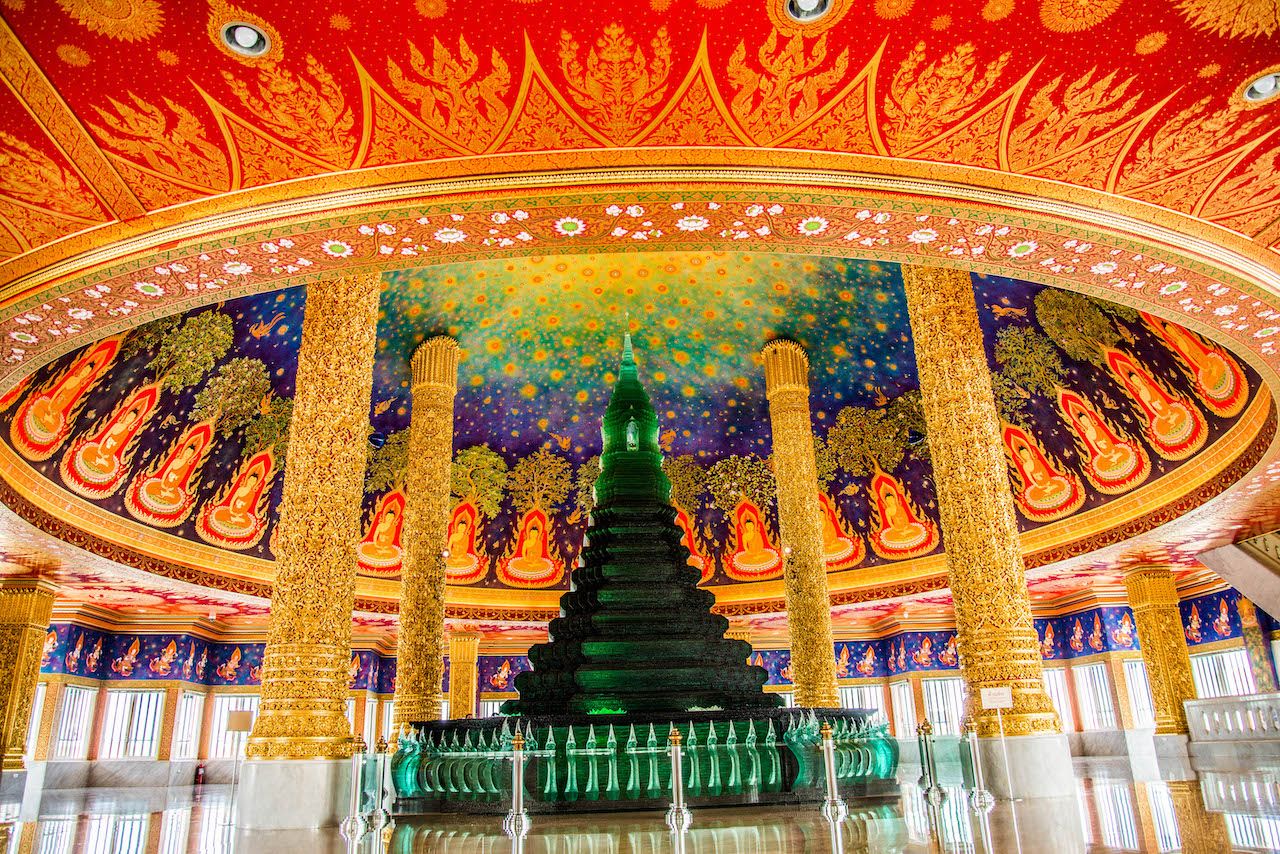 In the afternoon, the mood in Thonburi becomes far more relaxed as kids play football in the side streets and laborers enjoy a beer after work. Vendors set up food stalls along the road and fishermen cast lines into the canals. Since so few tourists visit Thonburi, don’t be surprised if you’re invited to stop for a coffee or beer by a local at one of the cafes or stands along the roadside. Follow the canal and cross over the bridge to the sprawling Wat Paknam, and be ready to climb your way up at least some of the 260-foot-tall pagoda. The fourth-floor prayer hall is like stepping into a corner of heaven — in the center of the room stands a kaleidoscopic glass stupa adorned with four golden Buddhas.

This in itself is enough to startle, but the whole setup is surrounded by illuminated serpent heads and glowing lotus flowers. The domed ceiling, supported by four gilded columns, depicts a surrealistic night sky ringed by dozens of Buddha images achieving enlightenment under the Bodhi tree. It’s stunning, and even though Thai temples are usually lively places where worshipers light candles, burn incense, and bang on gongs, visitors here tend to stand in reverential silence merely admiring the art.

After appreciating the interior, step outside for a 360-degree view of the downtown skyline to the east and local neighborhood from the balcony. Take some time and explore the smaller temples and prayer rooms of Wat Paknam before moving on, and stand in awe of the 200-foot-tall Buddha statue that is under construction. When completed, the Buddha and pagoda will dominate the Thonburi skyline. 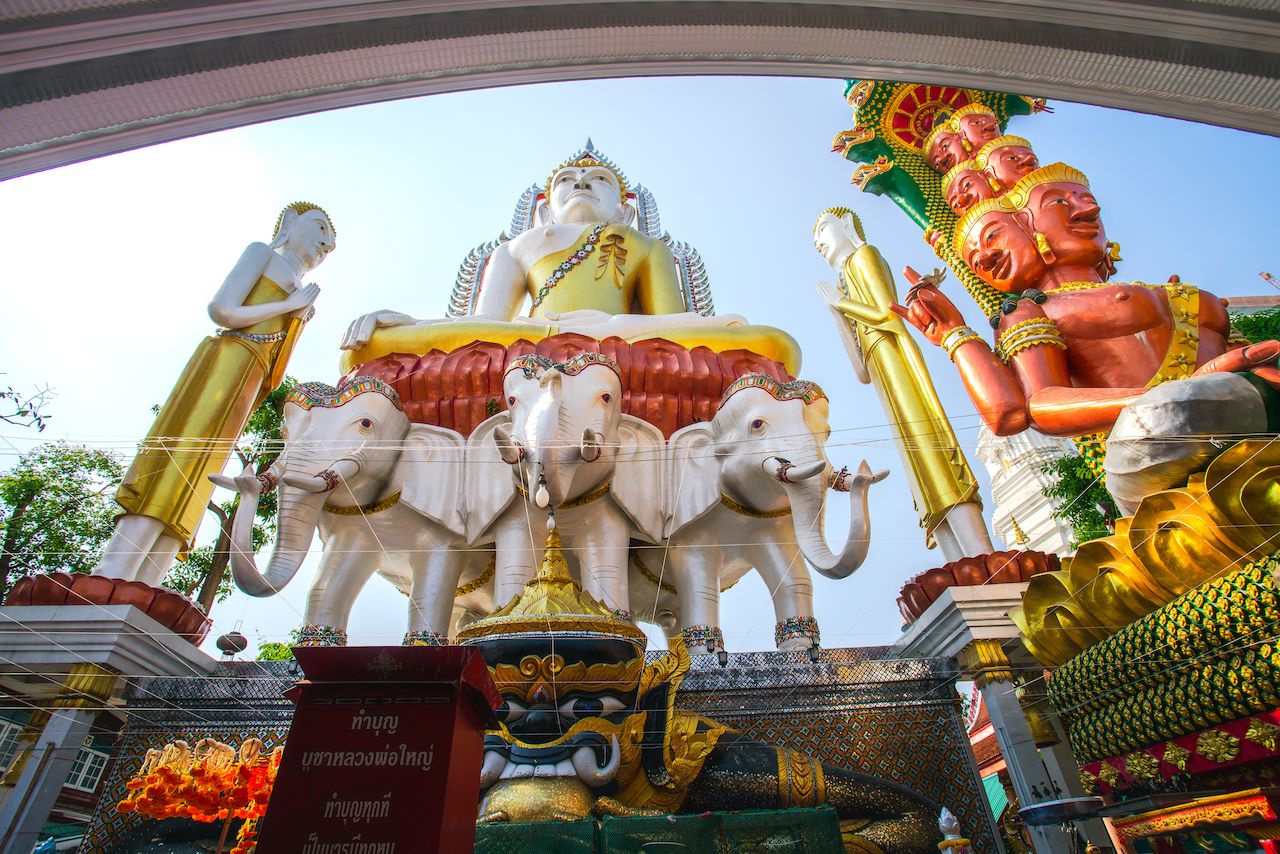 Descend the pagoda and cross the canal to the kitschy Wat Khun Chan and its collection of massive, colorful statues. The centerpiece here is a giant Buddha atop three elephants and a demon, an unusual collection at a Buddhist site but a sight to behold nonetheless. The entire temple complex has the feel of a Buddhist theme park and will probably yield your most Instagrammable photos of the day.

Beyond temples, explore the canalside neighborhoods 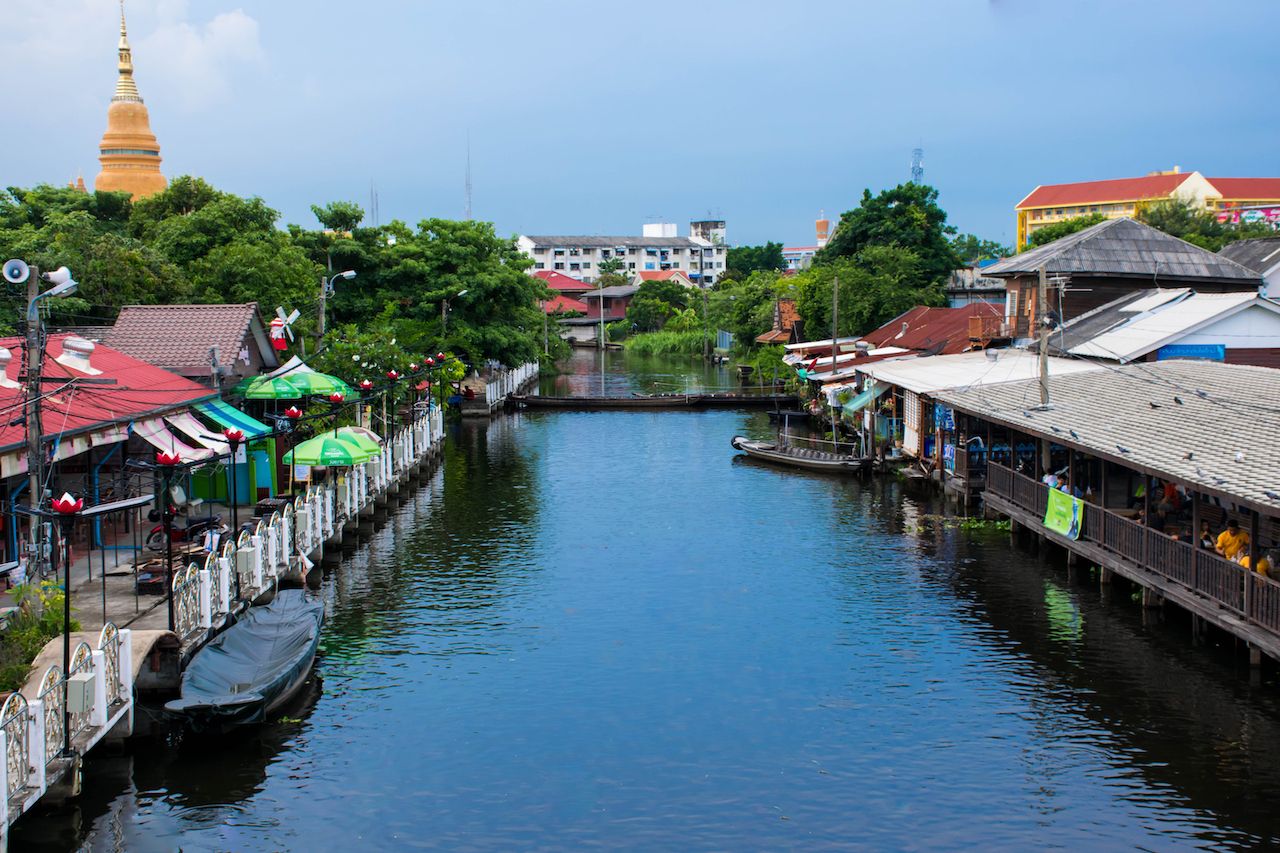 After Wat Kun Chan it’s time to take a break from temples and walk through pleasant residential streets to the Khlong Bang Luang Floating Market. Along the 1.5-mile walk are colorful houses, tiny cafes serving iced coffee, women sewing clothes on the sidewalk, and this being Thailand, dozens of food carts and casual restaurants interspersed. Although the Khlong Bang Luang Floating Market is officially open from 8:00 AM to 3:00 PM on weekends and holidays only, several shops are open daily. The highlight of these is Baan Silapin, or Artist’s House, a restored wooden stilt house which hosts a daily Thai puppet show at 3:00 PM. This is also an active workshop for artists who paint and draw, sometimes with an audience of admirers, so don’t be surprised if you’re beckoned to watch an impromptu art show. 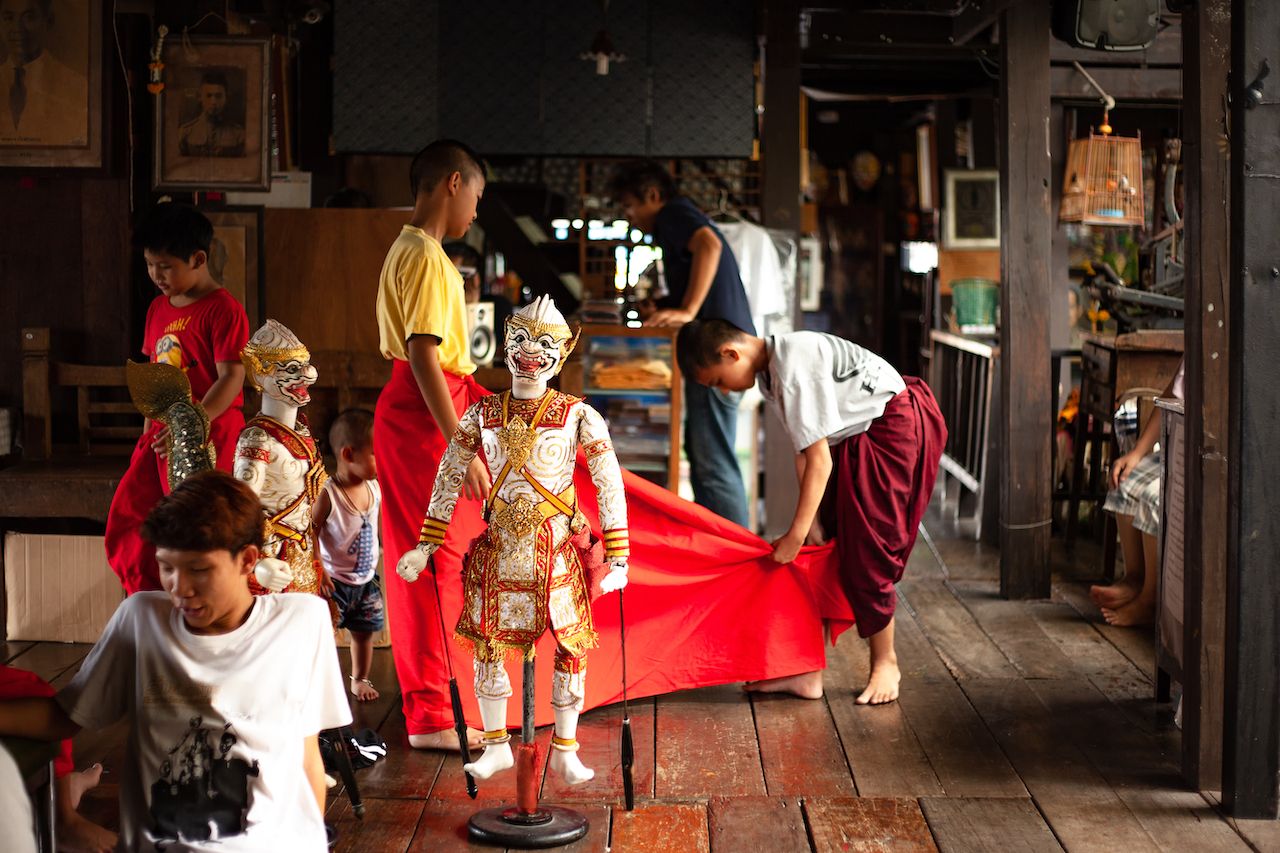 If you have managed not to eat your body weight in street food or drink enough iced coffee to cause jitters, the floating market is also an ideal place to take a break. Get a plate of food and a cold beverage, pull up a seat at one of the canalside tables, and chill — an activity that sometimes seems so far away in this city. Assuming you haven’t completely succumbed to temple fatigue, Wat Kampaeng adjacent to the market is your next stop. Inside the main temple are more artistic murals, and around the perimeter are timeworn stupas dating to the Ayutthaya period 250 years ago.

If you elect not to stop into another temple, begin the walk back to the BTS. There are two more stops along the way, both involving food and socializing with locals. At the end of Soi Phet Kasem 28 is the large Seni Market that comes alive each evening. There are dozens of food stalls, but you’ll want to find the stall serving over 20 varieties of som tom, the spicy salad Thais eat with nearly every meal. If you aren’t ready to go back downtown, J Bar and Cafe across the street from the Seni Market is a western-style pub with assorted beers on tap. Plus, it’s delightfully air-conditioned. After walking through Thonburi, you deserve a cold beer in air conditioning.

From the Seni Market and J Bar, the Bang Wa BTS station is a 10-minute walk, though leaving isn’t required since there are hotels and guesthouses in Thonburi. Near Baan Silapin is Aiim’s Tales Canal Boutique House, a beautiful six-room Japanese-style guesthouse right on the canal. While modern-day Bangkok will never be confused with Venice, perhaps a night sleeping by the water can transport you back to old Siam.

TravelThe Best Place To Go in Thailand for Every Type of Traveler
Tagged
Culture Travel Insider Guides Bangkok, Thailand
What did you think of this story?
Meh
Good
Awesome