Listen up people, because I have an important announcement to make: There are better things to do on St. Patrick’s Day than drink. Please, pick your jaw up off the floor and hear me out. Did you know that Ireland is home to an ancient and complex culture, which offers quite a bit more than Guinness and leprechauns? In fact, from here on out, any talk of leprechauns is banned.

Ireland has produced James Joyce, U2, and Saorise Ronan and Colin Farrell, to name a few. It’s informed almost all of our culturally ubiquitous ideas about magic (in the West at least), from the druid Merlin to Samhain, the celebration we now know as Halloween. Irish mythology even inspired the majority of Enya’s musical catalogue, which should be enough to earn our respect. So why do so many Americans think that the best way to celebrate St. Patrick’s Day is to get absolutely hammered, run through the streets in a ridiculous green costume, and puke on a stranger’s porch? We need to course correct. The Irish deserve better.

On March 17, you can read Ireland’s iconic authors, blast tunes written by its musicians, and cook Irish-inspired dishes for dinner (sorry, you won’t find any corned beef and cabbage here). Here is a brief primer on the wonders of Irish culture that have nothing to do with alcoholic beverages, and how you can integrate each one into your St. Patrick’s Day celebrations. 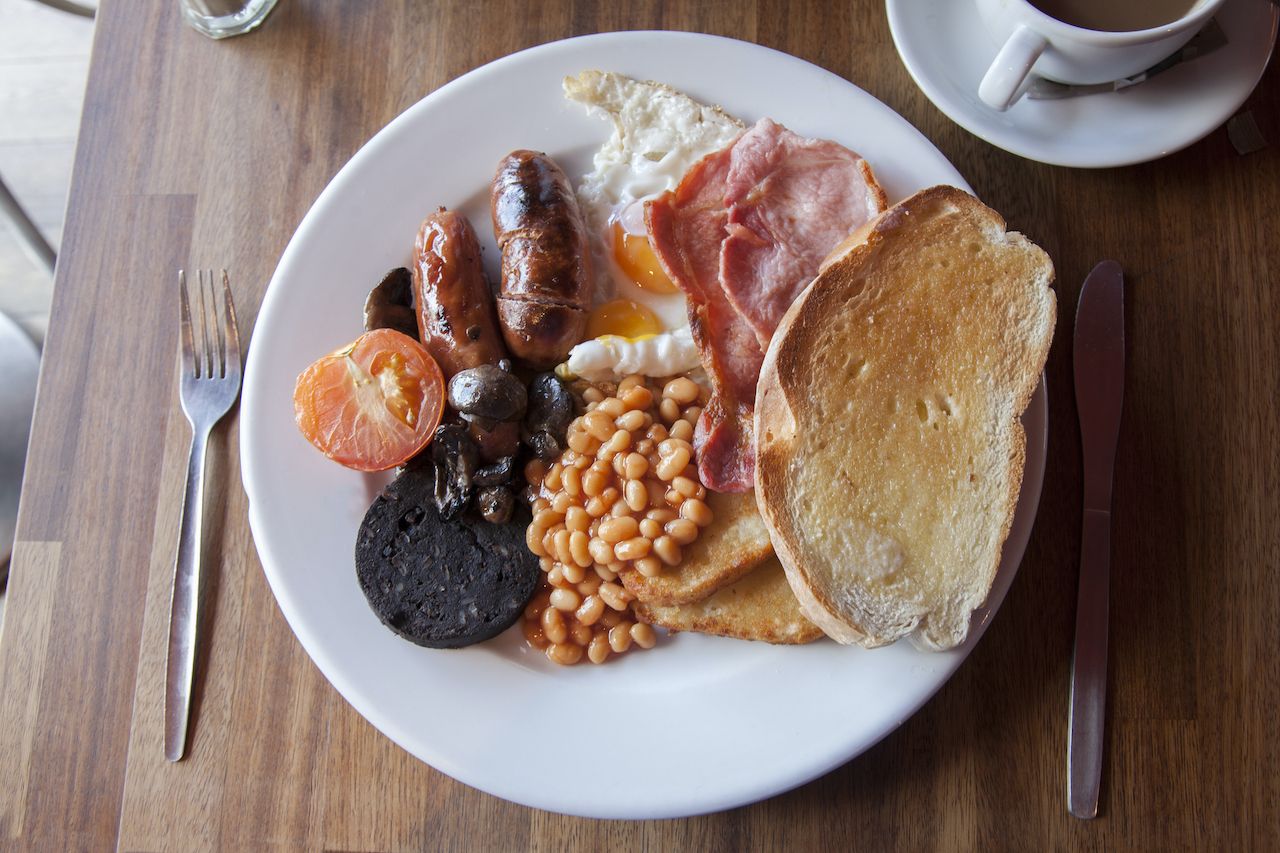 Irish cuisine is unfairly maligned. Soggy cabbage and bland potatoes hardly capture the breadth of ingredients grown in Ireland’s fertile terrain. The country’s lush farmland, home to free-range sheep and cattle, produces creamy, rich cheeses and butters. Proximity to the ocean affords Ireland with some of the highest quality salmon in the world, and the country has a special proclivity for smoked salmon. Irish salmon start their lives in the clear, clean waters of the country’s rivers, and then migrate out into the open ocean to mature. (Sidenote: The salmon has been an essential part of Irish culture for so long that the fish figures prominently in Celtic mythology as a source of power).

Traditional Irish dishes are far from dull and flavorless. Consider the full Irish fry, which is a combination of sausage fried in butter, baked beans, black pudding (blood sausage), sunny-side-up eggs, sliced tomatoes, and toast. Or the shepherd’s pie: ground lamb seasoned with rosemary and thyme and topped with a creamy layer of mashed potatoes.

On St. Patrick’s Day, host a dinner party instead of a house party. Prepare a feast. Start with a charcuterie plate with cured meat, smoked salmon, and Irish cheese. Bake your own loaf of soda bread. Serve shepherd’s pie with a side of colcannon (buttery mashed potatoes mixed with cabbage) and boxty (potato pancakes) for dinner. 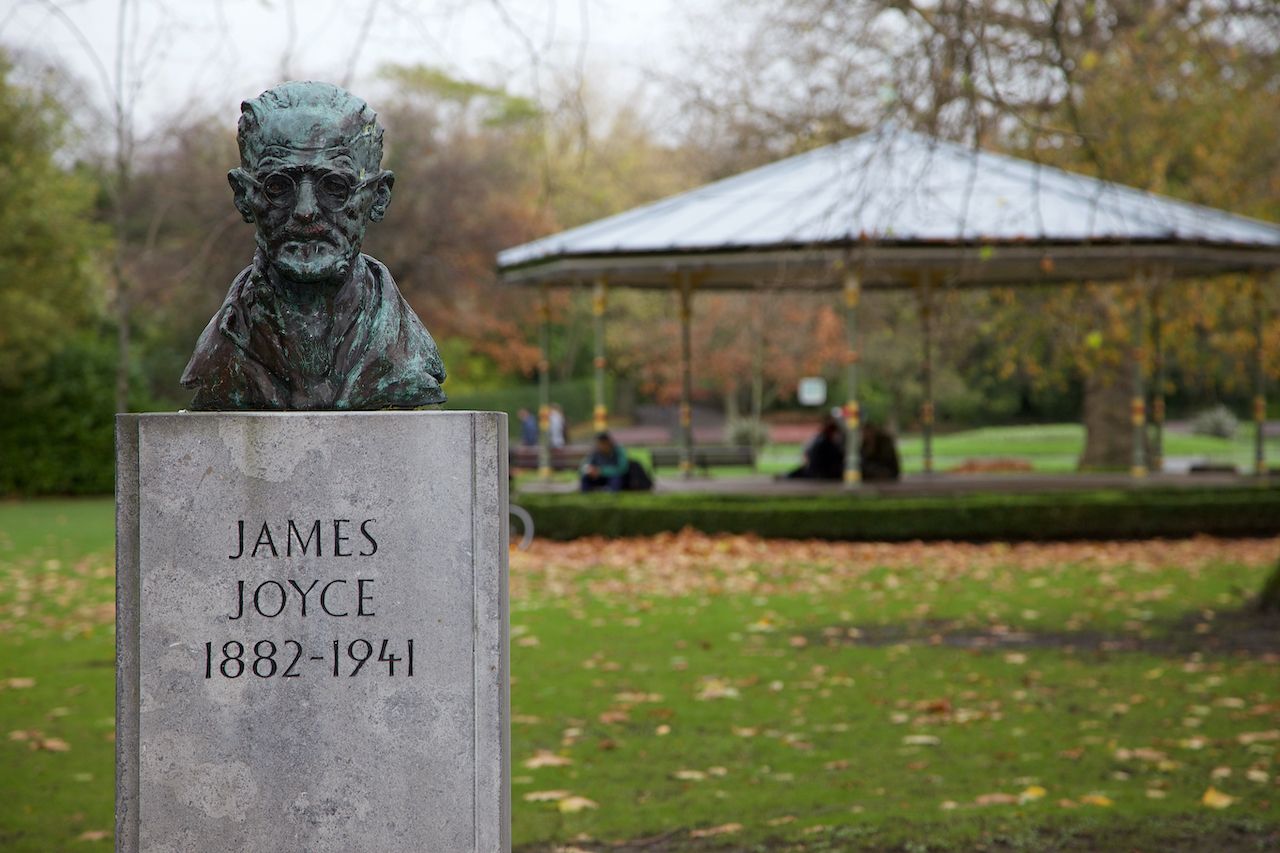 This tiny green isle is home to just over 4 million people (for comparison, the population of New York City 8.6 million), yet it has produced four Nobel laureates in literature: Samuel Beckett, William Butler Yeats, George Bernard Shaw, and Seamus Heaney. James Joyce never won a Nobel Prize but he is still counted among the best novelists to ever live. If you want to understand the Irish attitude toward life, reading their literature is a good place to start.

How Ireland has produced so much moving, insightful, experimental, and revolutionary literature is up for debate: It could be that the romantic, pastoral landscape inspires a longing to understand life’s purpose. The country’s long history of war, famine, and colonization might have fostered a rebellious, indomitable spirit in the Irish people — and perhaps even furnished their culture with a dark sense of humor — all traits reflected in their stories. Not to mention the fact that a constant deluge of rain might give an aspiring writer ample time to reflect on what, exactly, humans are doing with their short, sad lives on Earth. Their outlook is by turns hysterically funny, bleak, and hopeful.

Grab your library card or head to the local bookstore, and grab a few books by these masters. Recite Heaney’s poems to your cat. Stage a scene from a Shaw play in your living room. Better yet, make yourself a pot of tea and spend a quiet day immersing yourself in the transformative powers of Irish literature. 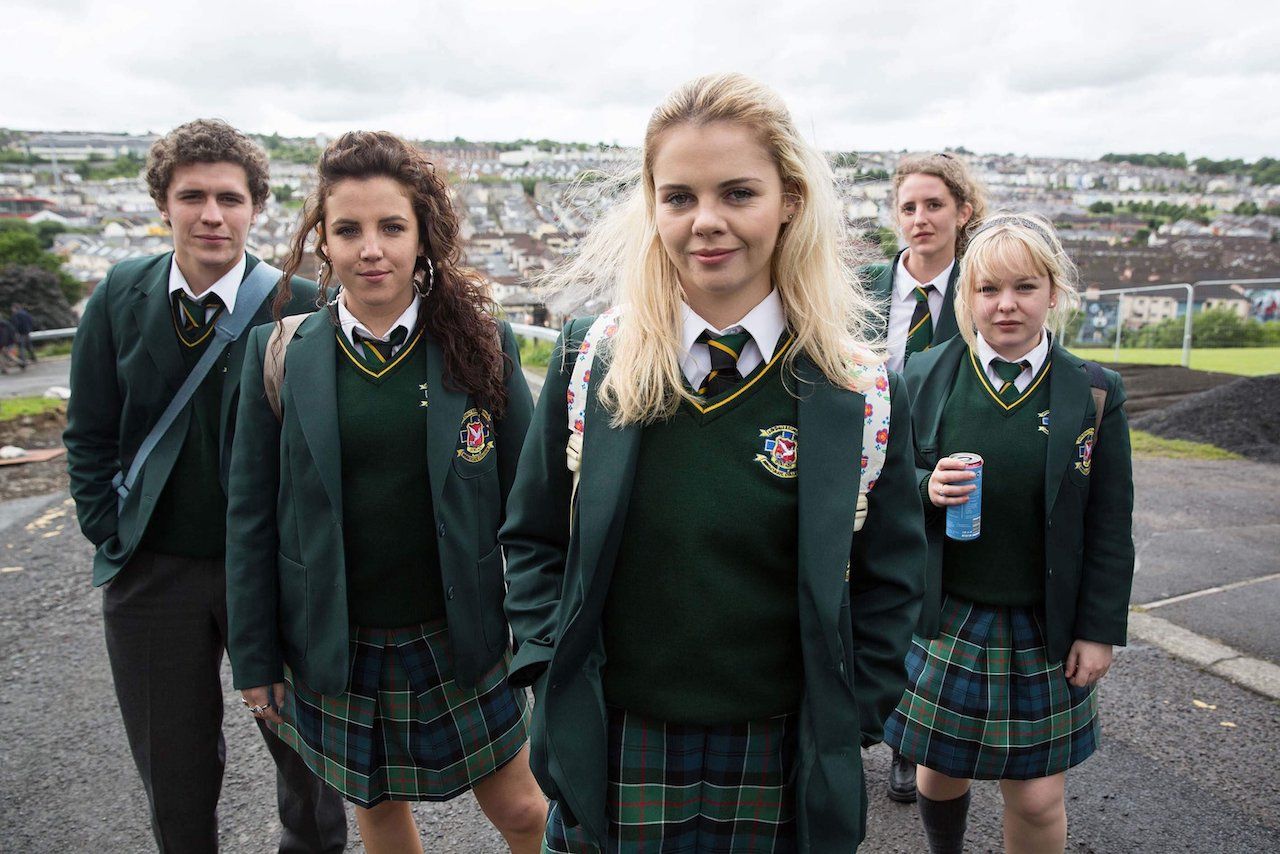 Irish television is predictably moody and dark. It’s also totally binge-worthy. Streaming services are currently playing a host of Irish series which are bound to become your new favorites: Dublin Murders (Hulu), based on the mysteries series by Irish writer Tana French; The Fall (Amazon Prime) in which Gillian Anderson plays a sexy and epically badass detective tracking down a serial killer; and Derry Girls (Netflix), which follows a group of friends navigating high school at the tail-end of the Troubles. If you’re a fan of a spine-tinglingly creepy Jaime Dornan or a black comedy interpretation of Catholic school, you need to grab a couple of bags of popcorn and park yourself on the couch.

Brooding detectives and teenage girls trying to find common ground with their Protestant neighbors is just the beginning. Father Ted is also streaming on Amazon Prime. The classic and beloved Irish sitcom follows three priests living on a tiny island on Ireland’s western coast. I truly cannot think of a more Irish concept. There is excessive tea, traumatized nuns, alcoholism, and angry swearing. Cancel your plans to go on that St. Patrick’s Day bar crawl, and just watch it, trust me. 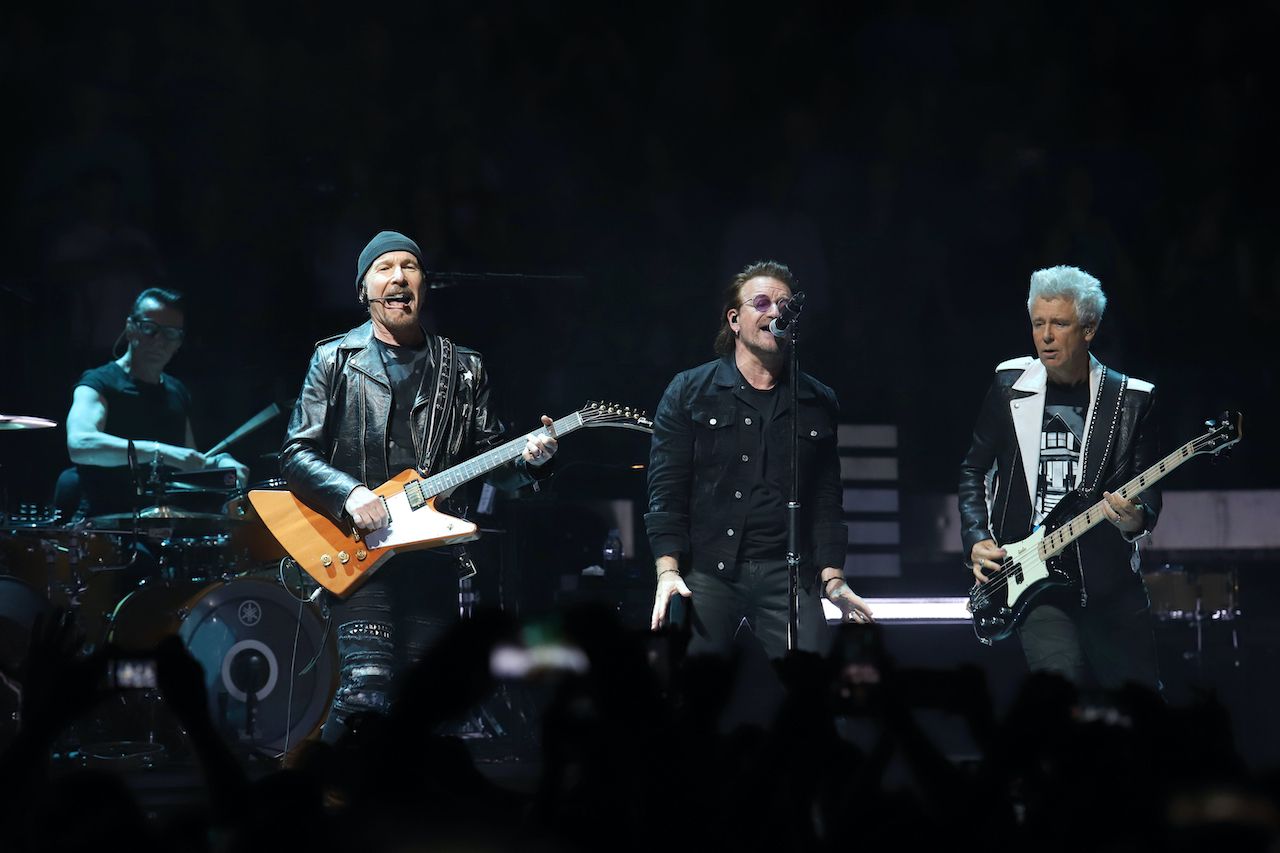 When I was in middle school, I came across a CD in my mother’s collection that looked intriguing and mysterious. This was in 2001, so I popped the disc into my portable CD player and pressed play. The rhythmic drumming that emitted from the speakers sounded ancient and mystical. Sometimes the singers chanted in a beautiful but foreign language (Gaelic, I would later learn) and the (English) lyrics referenced mythology, long-ago wars, and the fight against their British oppressors. That album was Long Black Veil by The Chieftains, and it’s still one of my all-time favorites.

In Ireland, folk music can be a form of oral history, a way to remember and honor the country’s troubled past. It’s also a musical tradition that is innately cheerful and high-spirited, featuring upbeat fiddles, whistles, and pipes. It will inevitably make you want to dance or kiss your crush, but beware: There is also haunting sadness to most Irish folk music that will make you cry in public.

But wait, there’s more! The Irish have also left their mark on modern rock, indie, and punk music. Perhaps their disposition is especially attuned to a little angst. We already know about U2, Enya, and Sting. The Cranberries are also Irish! So are The Pogues, My Bloody Valentine, and Snow Patrol. No matter what you’re doing on St. Paddy’s — vacuuming, exercising, cooking dinner — do it to a soundtrack of Irish bands. 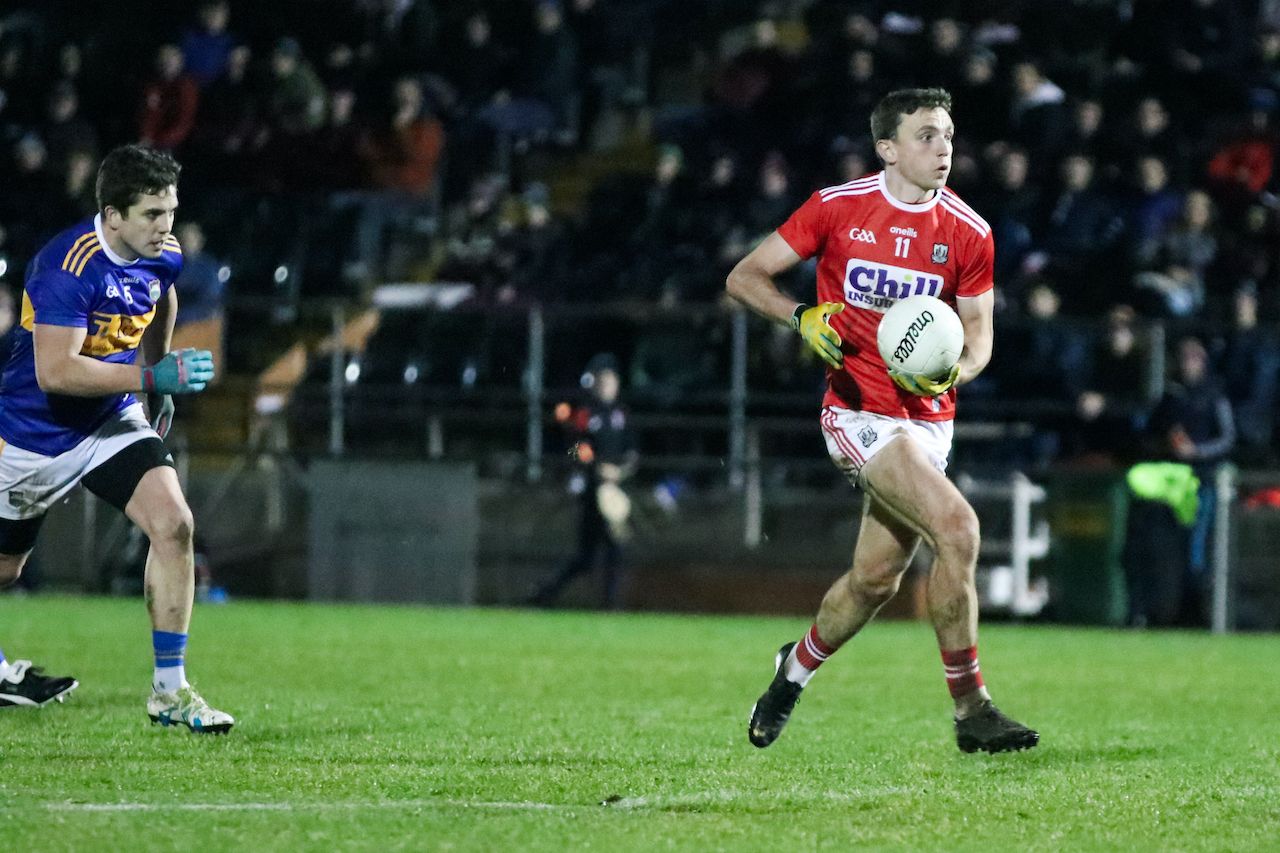 If you can’t make it to Ireland for St. Patrick’s Day to experience its many natural wonders, there’s still good news: Ireland also goes nuts for sports. If you’re of an athletic persuasion, organize a friendly game of football (soccer to us Americans) or rugby at your local park. More the type to watch than get out on the field yourself? Fox Sports is airing UEFA games all day on March 17.

Now that the basics are out of the way, here’s one for my true die-hard fans of the Irish way of life: This St. Patrick’s Day, skip the traditional football and learn how to play Gaelic football. Gaelic football combines elements of rugby and soccer — most of the rules are the same as the latter but you can hold the ball in your hands.

Gaelic football is an all-amateur league, meaning there are no paid players on any team. It’s a game designed for people who are truly passionate about sports, teamwork, and athleticism. I will allow one (1) Guinness to any person who goes the extra mile on St. Patrick’s by learning an entire sport invented by and for the Irish. Everyone else, skip the booze and remember: Drinking is about the 10th most interesting thing about Irish culture.