riding a ski gondola is, for many, half the fun of being on the mountain. From your vantage point suspended in the air, you’ll have high-alpine views while simultaneously escaping the potentially frigid weather outside.

As is the case in many marvels of modern engineering, ski gondola engineering has evolved enough that modern lifts can access even more remote — and breathtaking — terrain than ever before,  including some beautiful mountain summits. Here are six of the world’s coolest ski gondolas that stand out as unique in their reach,  design, epic views — oh, and the part where you ski or snowboard down is pretty cool, too.

As a side note, we love aerial trams as well — so much so that highlighting the ski trams is another article in itself. So this article focuses only on gondolas (which are fixed on a rotating cable), as opposed to trams (which move up and down on a fixed cable) or funiculars, which are dual-cable gondolas. The latter is only available at one place in the US: Palisades Tahoe, in northern California. 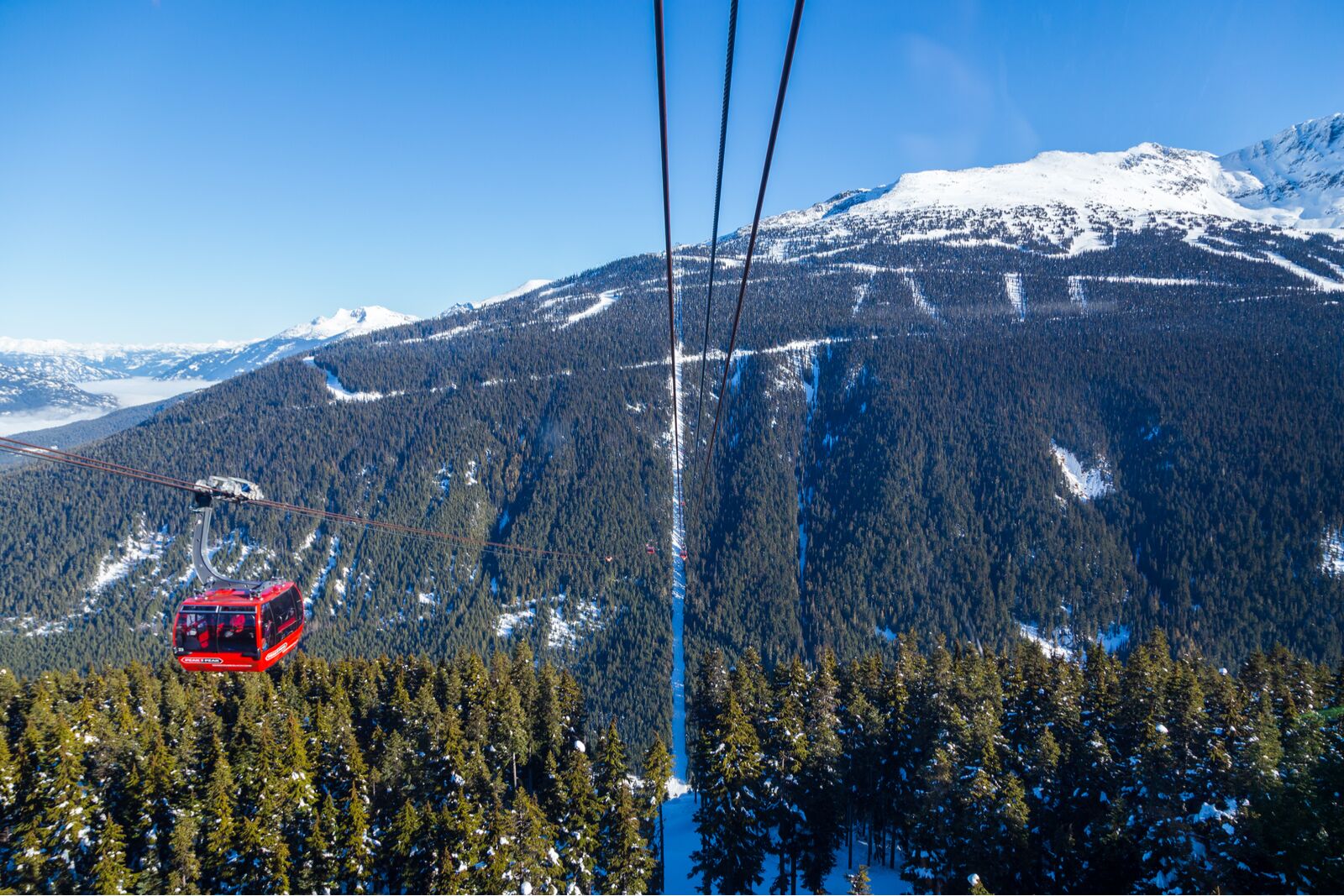 Imagine hovering a few hundred feet over a valley floor with the towering peaks of Whistler and Blackcomb mountains on either side. You’re standing up and rotating in clockwise circles, awestruck at the setting alpine setting. What’s more, you’re moving – from one peak to the next, heading towards epic turns on one and departing from epic turns on the other. That’s the 360-degree experience of the Peak 2 Peak Gondola and Whistler Blackcomb.

North America’s most innovative and productive gondola experience is also it’s most breathtaking. Nowhere else can you move between two legendary ski hills on a nearly two-mile traverse through the sky. It’s almost worth buying a lift ticket just to ride the gondola, but then you’re at Whistler, and there’s also the skiing. Unlike many other gondolas with towers, it’s one towerless cable moving guests horizontally, rather than vertically. Oh, and bonus: you don’t have to be a skier to take in the winter views. 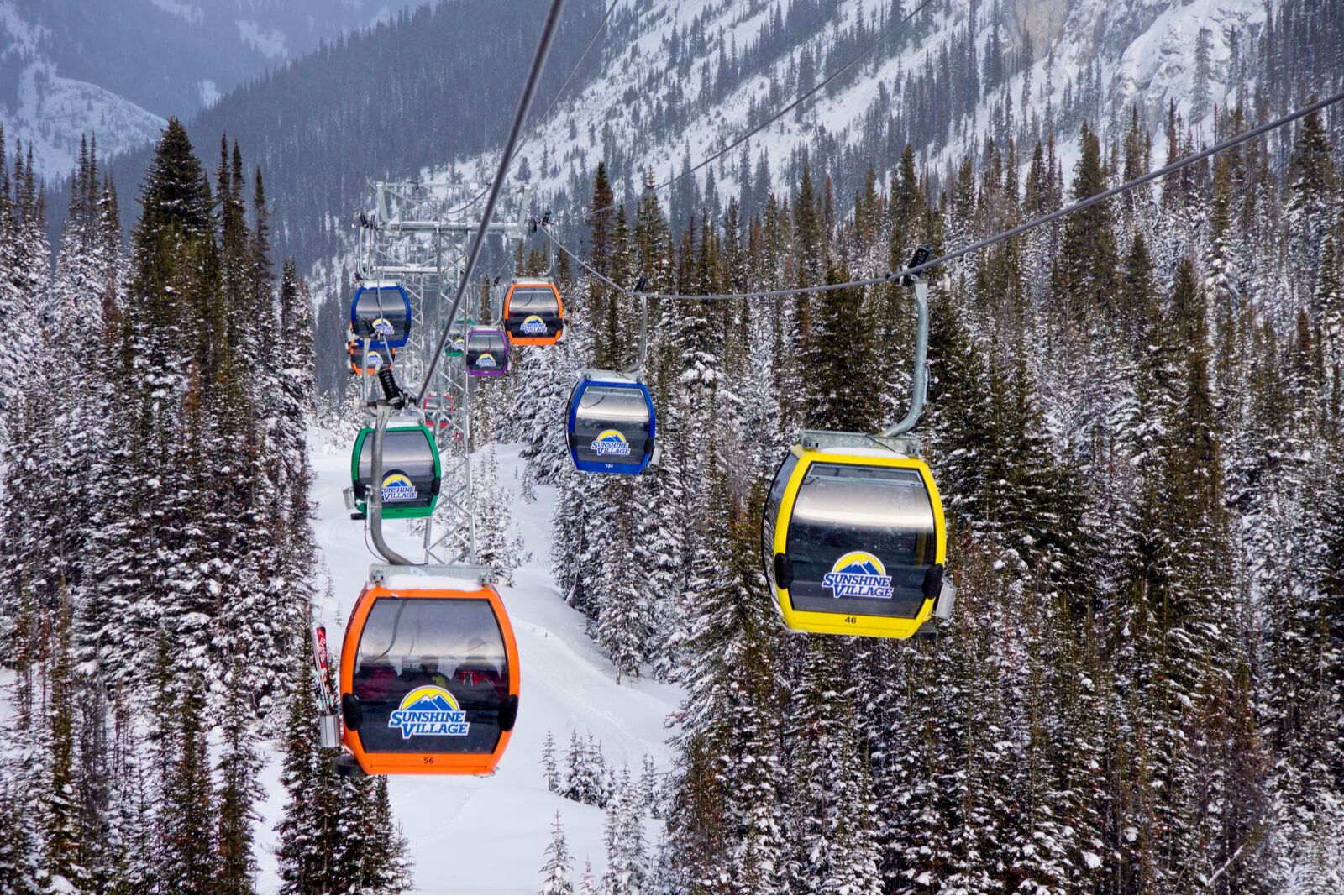 There’s nothing like starting your morning with pristine views of Canada’s Banff National Park. And at Sunshine Village, it’s a prerequisite. Here, skiers and riders start their day with a ride on one of the coolest ski gondolas in Canada, covering three miles from the base area to the resort village. From there, skiers hop on a more traditional lift chair to the resort’s steeps. The candy-colored cable cars provide full-circle views of the surrounding mountains and afford skiers an aerial view of the national park in winter. It’s unparalleled and truly one of the most beautiful ski resorts in the world.

At the end of the day, you can either ride the gondola back down to the parking lot or challenge yourself on the full trail down from the village. Whichever you choose, you may find yourself jealous of those who went the other way. But hey, it’s Banff, so there’s no reason to second-guess yourself when in one of the most beautiful places in the world. Both ways down are spectacular. 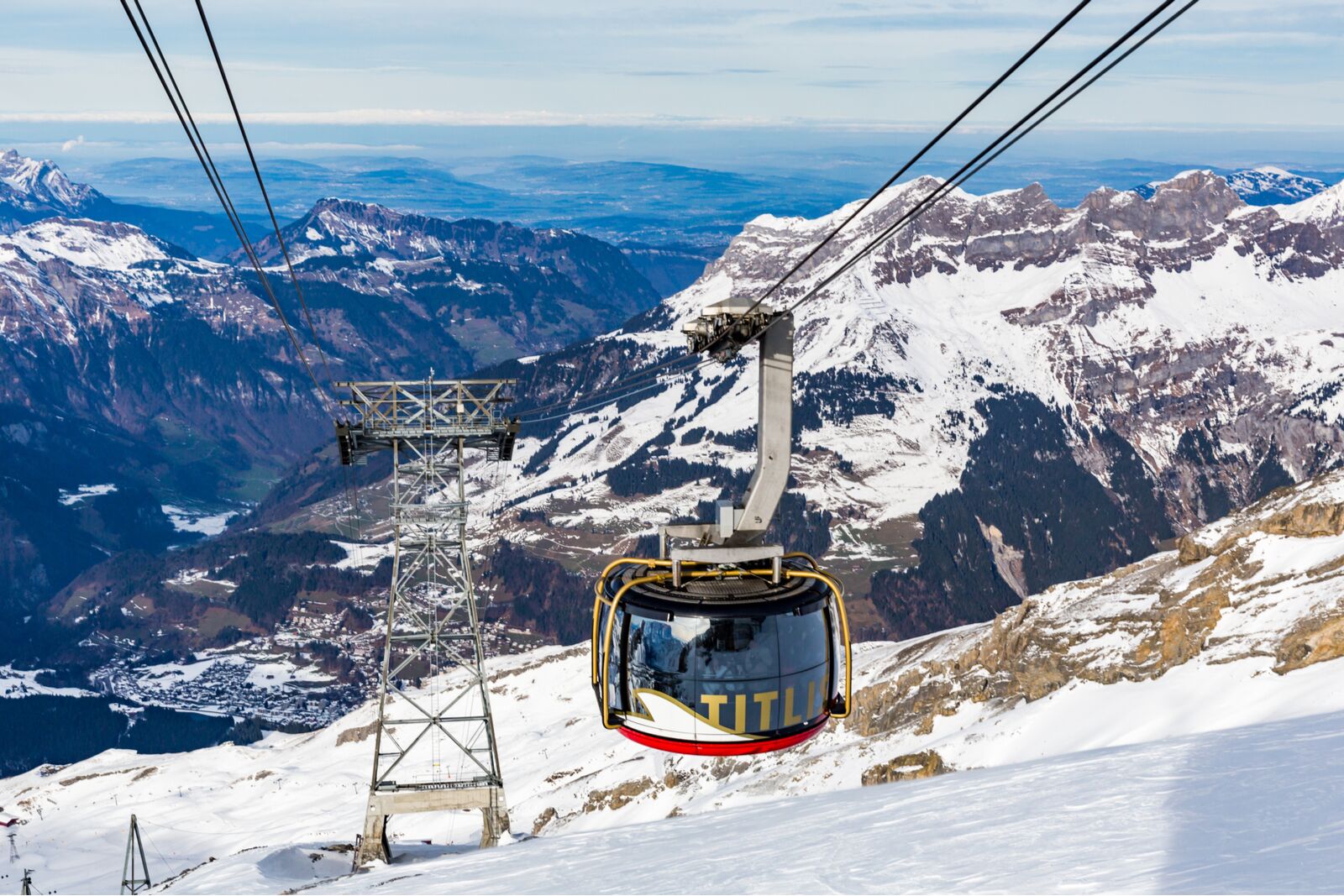 Nowhere on Earth has peaks like Switzerland. The Eiger, the Matterhorn, and the Jungfraujoch are near-household names around the world, so it makes sense that the heart of the Alps has some incredible gondola rides to match. The Titlis Rotair elevates riders to the peak of Klein Titlis Mountain in a rotating cable car that provides 360-degree views of the Alps. It’s a photographer’s dream, so if you’ve been looking for an excuse to bring the DSLR in your ski pack, this is it. There’s not a bad seat in the house. 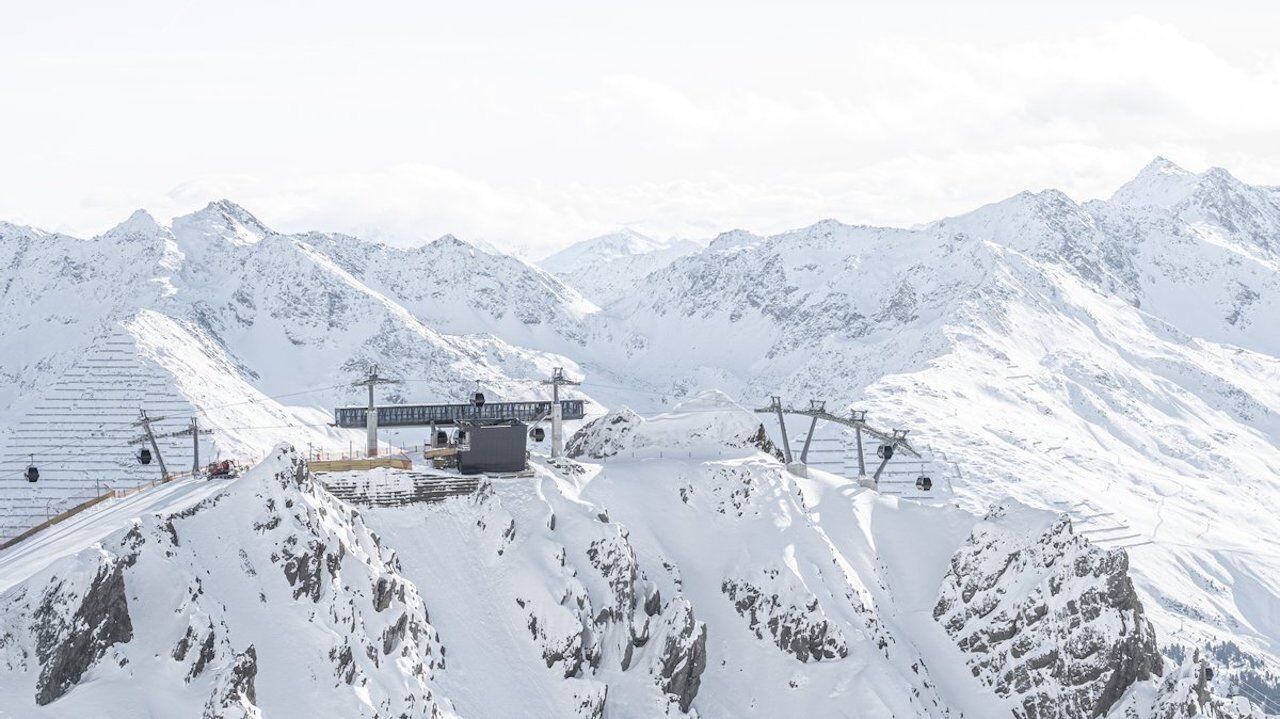 Europe is home to many of the world’s coolest ski gondolas, and thee newest entry in this list of the world’s coolest ski gondolas is the Schindlergratbahn in Austria. Opened in 2020, the 10-person cable cars shuttle skiers at St. Anton and Lech far above the treeline to the rocky peaks of the Austrian Alps. The feeling of being on the summit is as close as most of us will ever come to feeling like a mountaineer atop a long-lost summit. As you gave down on the world around you, rest assured that nowhere in the Alps offers better 360-degree views of the valleys below. Better still? You get to ski down to those same valleys. It’s certainly not a ride for those with serious cases of vertigo. 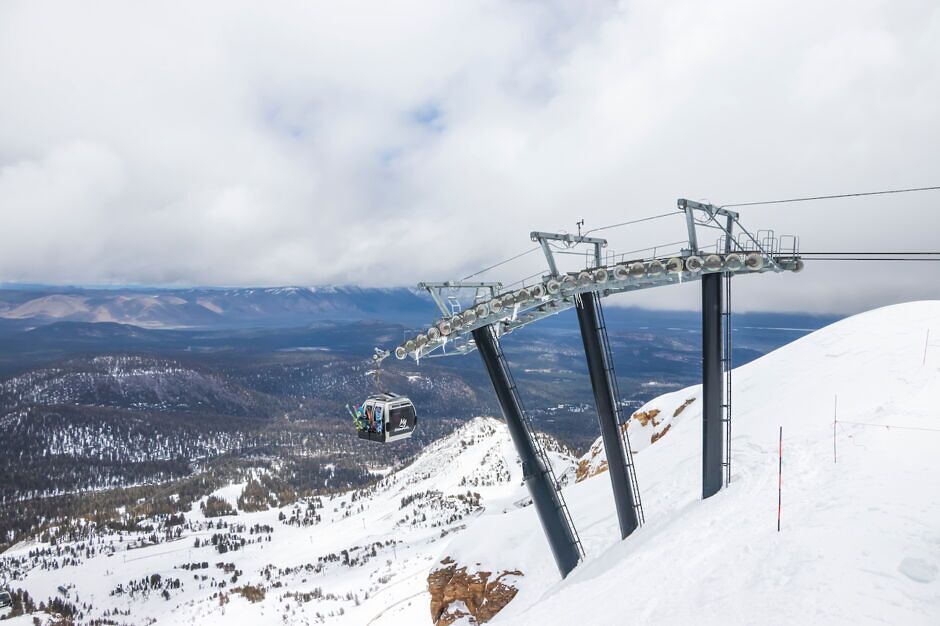 Rarely do gondolas at American ski resorts elevate skiers and riders in one ride high enough to reach that mountain’s most extreme terrain. Usually, skiers have to take a gondola, then transfer to another lift and possibly hike for a bit. Some top-notch resorts like Big Sky and Jackson Hole will get you to the top via an aerial tram.

But Mammoth Mountain is the exception. Its Panorama Gondola puts skiers firmly on the resort’s summit, where they can then elect to drop into double-diamond screamers like Huevos Grande and Climax, or cruise slightly north to Hangman’s Hollow and the Dropout Chutes. But don’t drop in too soon — the exit point for the gondola is among the most photogenic spots in the entire Sierra Nevada. 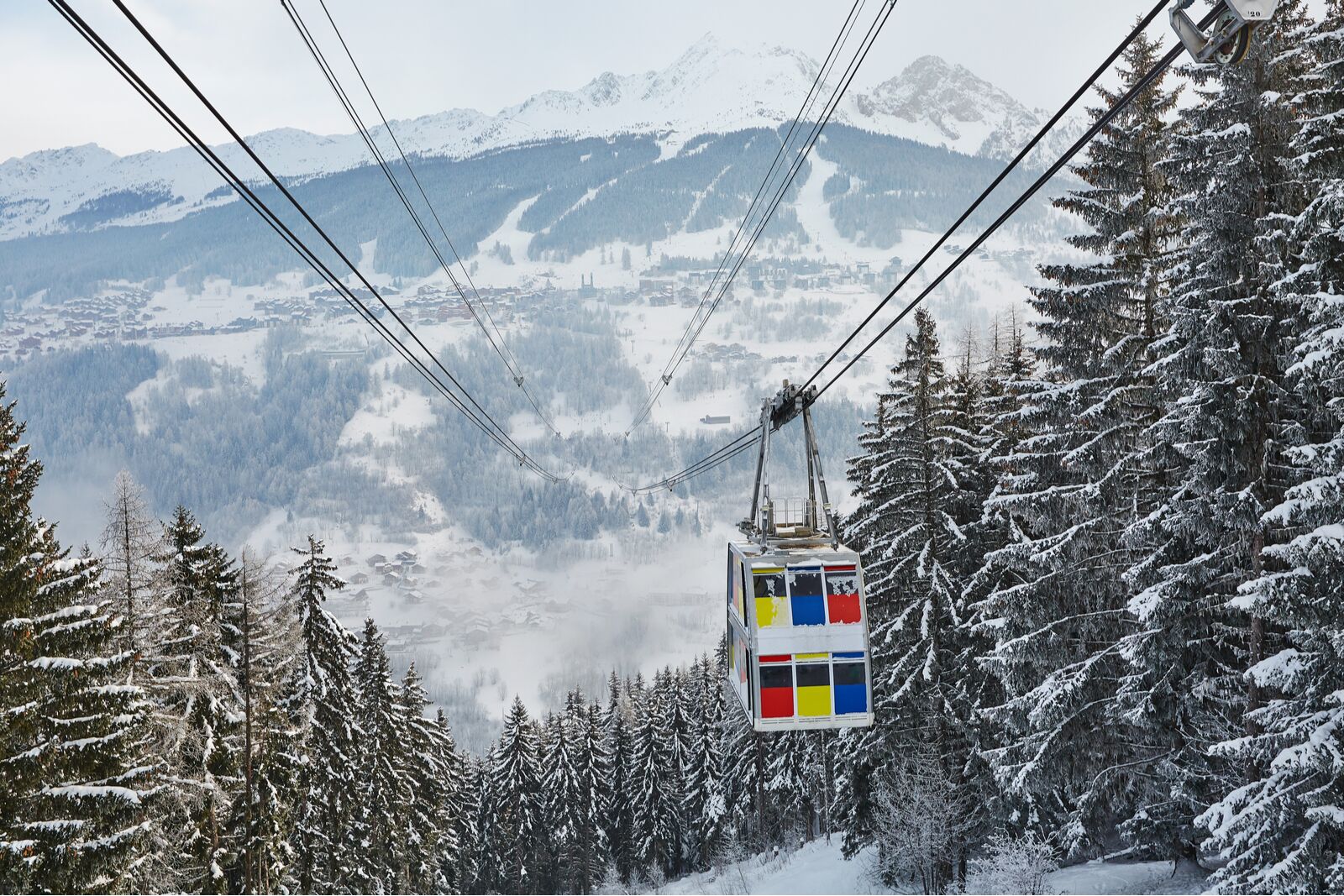 Double-decker gondolas are a rare breed, and the Vanoise Express at France’s Paradiski resort is a record-setter at that. The fact that the designers managed to create two levels of gondola access on each car is itself a marvel — but what’s even more amazing is that the lift connects La Plagne and Les Arcs to form the massive resort known as Paradiski. Few lifts anywhere in the world offer access to more mid-and expert-level terrain than the Vanoise Express, which deposits you above some 35,000 acres of skiable terrain. If this isn’t paradise, we’re not sure what is.

OutdoorWhat It’s Like To Be a 2022 Olympics Ski Patroller: Quarantines, King-Size Beds, and 80 Mph Skiing
Tagged
Ski & Snow
What did you think of this story?
Meh
Good
Awesome