I’M RUNNING ON a narrow riverfront path in City X. Traffic screams dangerously close to the curb, threatening to send me flying into the water. Dogs with Chevy-sized teeth snarl at my heels. And people watch me with surprise, amusement, or indifference as I run on, praying I’ll make it back to my lodging in one piece.

While traveling I’ve encountered – and survived – almost any danger that can cross a runner on the road. But instead of deterring me from my adventures as a running guide writer, they’ve become memorable parts of my travels. 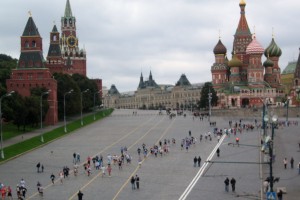 Moscow Marathon with St. Basil’s Cathedral and the Kremlin in the background / Photo: Taylor Chase

When running in new places, it’s not traffic laws that matter, it’s how the locals interpret them.

I had a five-mile route I used to run through Moscow, but I never completed it without cars narrowly crushing my toes as I came to intersections or angry drivers mouthing obscenities at me as I raced across the street.

In Italy I got used to two-way traffic on one-way streets, and in Serbia it was common to see cars parked on sidewalks. At the same time, I remember standing at an intersection in Switzerland, patiently watching cars back up behind a crosswalk, when it suddenly dawned on me that the drivers were waiting for me to cross. 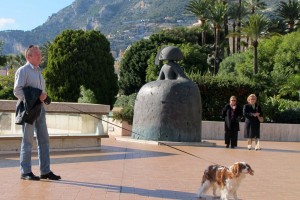 Two words: dogs suck. Once while running through Kiev’s Park Vichnoi Slavy, I rounded a corner and came across a collection of five mean-looking hounds. I stopped, backed away slowly, and managed to continue on without becoming puppy chow.

That was a lucky exception to the rule. Usually, stray dogs won’t let runners escape that easily. In many places people exchange tips on what to do when attacked by one. By far their most common piece of advice was to carry a rock and throw it at a snarling pooch and then run as fast as I could in the opposite direction.

I learned to keep my eyes open for stray dogs when running the world, but I’ve also had to watch out for domesticated ones too. Nowhere was this issue more apparent than in Monaco, where dog sizes seemed proportional to the country’s size. While there, I never saw a pup over 18 inches long or off a leash. But these small yapper dogs didn’t hesitate to nip at my ankles or try to trip me up as I ran by. 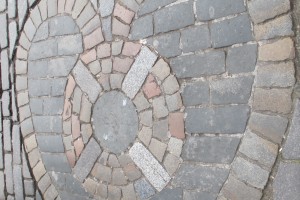 When running in other countries I’ve found I spend almost as much time looking down (and out) for crumbling infrastructure as I do looking in front of me. What I’ve realized is that not all countries and cultures place prime value on putting a solid slice of asphalt beneath a runner’s feet.

And I’ve made my peace with this fact. I now delicately pick my way across the cobblestones of Edinburgh’s Royal Mile and Prague’s Staré Mĕsto, and step lightly over the Sarajevo’s shallow pockmarks left over from the Bosnian War. 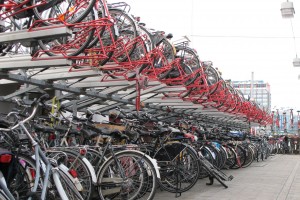 An illustration of a parking lot in Amsterdam / Photo: Taylor Chase

In the United States, where I’m from, we commonly use the term “bike path” to refer to walking paths, jogging paths, rollerblading paths, and any other path along which motorized vehicles are restricted from travel. This is not so in parts of the world where bicycles are a common form of transportation.

Bike lanes are bike lanes. They are for cyclists alone, and if I’m not on two wheels I have no business being in them. I had my first experience with bike-lane supremacy in Budapest, where I nearly lost my life walking in a rider’s way.

Then in Amsterdam, where cyclists outnumber cars, almost outnumber pedestrians, they have the right of way, and have their own stoplights. Cars, walkers, and even runners must stay out of designated cycle paths.

Running, I admit, might not be a universal cultural value. I’ve met with my share of blank stares when I ask people at hostel desks or tourism offices about their city’s best running territory.

I’ve found that rather than making room for me to run, some pedestrians toss me an indifferent glance and continue on their way (which often happens to be in mine).

Then I was surprised in Tallinn, Estonia, where, on a summer midnight sunset, I was surrounded by locals jogging, cycling, and actively enjoying the day’s end.

Then again, I’ve been surprised while running hill repeats at Tivoli Park in Ljubljana, Slovenia, with Slovenes sprinting past me. And on Krakow’s Planty Garden’s paths, where the day after bumbling babcias blocked my way, the city roped off the same paths for a 5K race. Those occasions made me realize that when I’ve run up short, there are always running gems.

:
Want to learn more about running through urban areas? Check out Taylor’s post on a run through Venice
Check out these 7 scenic marathon routes