“CAN YOU BELIEVE Drogba missed that penalty kick?”

“Will Torres ever score for Chelsea?”

“Wenger really needs to get Arsenal in order.”

You’ll hear some variation of the above in a taxi in East Africa, a street market in Thailand, a pub in Australia. Of all the contributions the British have made to world culture, Barclays Premier League football seems to be the most pervasive and unifying.

With 20 clubs total, the Premier League is the pinnacle of the football league hierarchy of the UK. It’s the world’s most watched sports league, regularly broadcast to over 600 million people in pretty much every country. In 2011, the total revenue taken in by the clubs exceeded £2 billion for the second year in a row.

The Brits are fanatical enough about their football, but the massive following commanded by the league’s top four teams — Chelsea, Arsenal, Liverpool, Manchester United — seems to be even more passionate elsewhere in the world.

Perhaps this is due to the remarkable number of nations from which players hail. In a record-making match in 2011, 22 nations were represented by 27 players. Few teams can claim that any more than half its players are from the UK, while the flags of African, South American, and other European nations are strongly represented on team rosters.

I first experienced the phenomenon while in South Africa during the 2010 FIFA World Cup.

Watching the host country play Mexico in the first game of the tournament, I stood nervously draped in a flag of South Africa, the nation I’d temporarily adopted after a semester of studying there. I had only a loose understanding of what it meant to be offside, but as everyone in the bar collectively chanted the South African folk song Shosholoza, it was clear the people around me were present for something much larger than soccer. 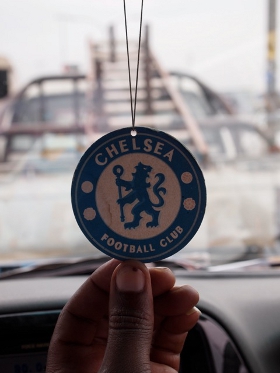 It’s not just Premier League games and players that capture the attention of international followers, but anything associated with the league. On a recent trip to Tanzania, I saw several informal minibus taxis, known in Swahili as daladalas, displaying Premier League pride with huge painted Emirates logos, the Arsenal team sponsor. Something tells me the airline wasn’t paying the driver of a 1990s Toyota van for hand-painted advertising space.

Sitting in midday Dar es Salaam traffic, my travel companion and I noticed our taxi driver was announcing his team allegiance in no fewer than three forms: a car air freshener, bumper stickers, and a large windshield banner. Juma was a Chelsea man, while we were for Tottenham. When Juma began checking newspaper stats, we struck up a conversation about the weekend’s upcoming matches and where he’d be watching them.

At the central bus station, Juma graciously helped us locate our bus and negotiate the ticket price (no small favor when you’re the only mzungus around), gave us his business card, and bid us farewell.

A few days later, we were back in Dar Es Salaam without any plans. We called Juma, who quickly arrived, and we shared a lunch of calamari and beer while watching a match on the restaurant TV.

One note of caution: While I’ve had largely positive experiences with the unifying power of Premier League football, one should tread carefully, particularly in the UK. Special care should be taken if a local derby — a game played by two teams from the same area (such as Manchester United vs. Manchester City, or Tottenham vs. Arsenal) — is on the pub TV. Loudly vocalizing your view that Wayne Rooney is a wanker while sitting next to a Man U fan will get you into trouble faster than you can order another pint.