View all travel news
Top Countries
Top CitiesView All Destinations
Trending Regions
Trending Cities
Load More
Archeologist and ancient rock-art specialist David S. Whitley has studied the mysterious work of our predecessors at hundreds of sites all over the globe. We asked him to share with us his top 5.

JUST BEFORE THE NEW YEAR, while waiting for some minor patchwork to be done on our rented plastic land yacht, the crew and I took a stroll along the sandy paths of Rinconada Canyon, on the western fringe of Albuquerque, New Mexico, at Petroglyph National Monument. Having spent a day with Dr. Whitley back in November, in California, perusing a much larger and (generally) older collection of rock art deep inside a Navy bombing range, I wanted to see how these images compared.

The day was fine—still and warm, with plenty of that sidelong supernatural light so celebrated in Southwestern painting and photography. We found desiccated millipedes, owl pellets, coyote scat, piles of windworn bottleglass, rusted beer cans from the days before pop tabs, and a bright, safety-yellow BB much coveted (and promptly lost) by the 2-year-old in the bunch.

We didn’t make it far into the canyon. We never got beyond the sound of traffic rushing along Unser Boulevard, or the views across the subdivision roofs to downtown and the airport beyond. We never got out from under the high-tension power lines.

Still, we saw a fading array of very old images chiseled into the black-varnished basalt: lizards, turtles, bird’s feet, spirals, and stick-figure medicine men in horned headgear. Most, we had read, were made by “Ancestral Pueblo peoples” between 400 and 700 years ago. But there were also Christian crosses, presumably made by Spanish colonists as early as the 16th Century. And other images that may be as old as 3,000 years before the present.

The Park Service doesn’t like the term “Rock Art.” “The images are more than just art,” runs the argument. “In fact, Native American languages generally do not have words that describe things in artistic terms.” Nor are they (the images) to be seen as graffiti.

What it’s all about, and why people chose these places in particular to carve their “glyphs,” are questions roundly debated by today’s ethnographers and archeologists, and of course rich fodder for the imaginings of those with an interest in what came before us.

“Anytime you’re dealing with iconography from another culture it’s fertile ground for people’s ideas to run amok,” says Whitley. “Of course we’ve got people who are adamant that this rock art was made by aliens.”

For his part, Whitley thinks these images are nothing less than windows into the origins of human creativity and religion, phenomena which happen to be coincidental, he says, with the historical emergence of the gene for what we now call bi-polar disorder. For more about that, check out his latest book, Cave Paintings and the Human Spirit.

We played in the sand, ate leftover Christmas ham, tortilla chips and baby carrots. We watched the steady procession of local families making their way up the trail, posing for pictures and climbing on the rocks. Then we boarded our rattletrap vessel and disappeared into an approaching storm, leaving only footprints and a large quotient of carbon compounds as evidence of our passage.

Petroglyph N. M. provides a pleasant and easily-accessed introduction to the genre. But after so many decades of love and abuse, and with the ubiquitous intrusions of the contemporary world, it’s easy to see how hard it is to preserve places like these, and why this one doesn’t make Dr. Whitley’s top 5.

Here are the sites that do, in no particular order: 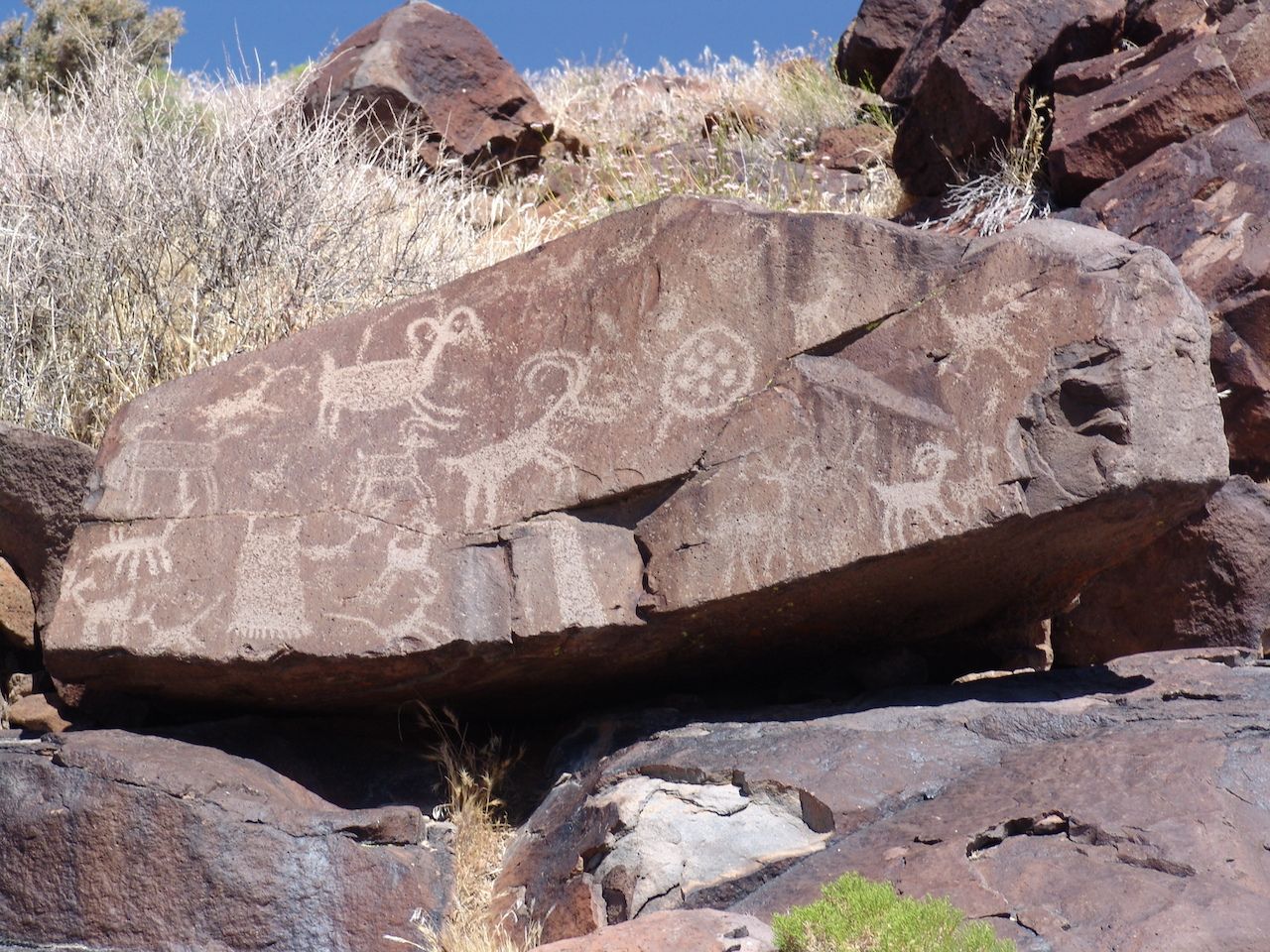 With as many as 100,000 images dating as far back as 16,000 years before the present, the Coso District is considered the greatest concentration of petroglyphs in the Western Hemisphere.

Thanks to its location inside what is now the U.S. Navy’s premiere weapons testing range deep in the Mojave desert, in what Whitley calls “one of the most desolate places in North America”—it is also one of the best preserved sites on the planet.

It’s not a World Heritage Site—yet—but Whitley believes it meets the criteria, and that it should be. It’s been on the National Register of Historic Places since 1946. “In the big scheme of things,” says Whitley, “this is one of those that people should see.”

Tours are available to civilians (U.S. citizens only, alas) through the Maturango Museum in Ridgecrest or by special arrangement through the Navy’s public affairs office. 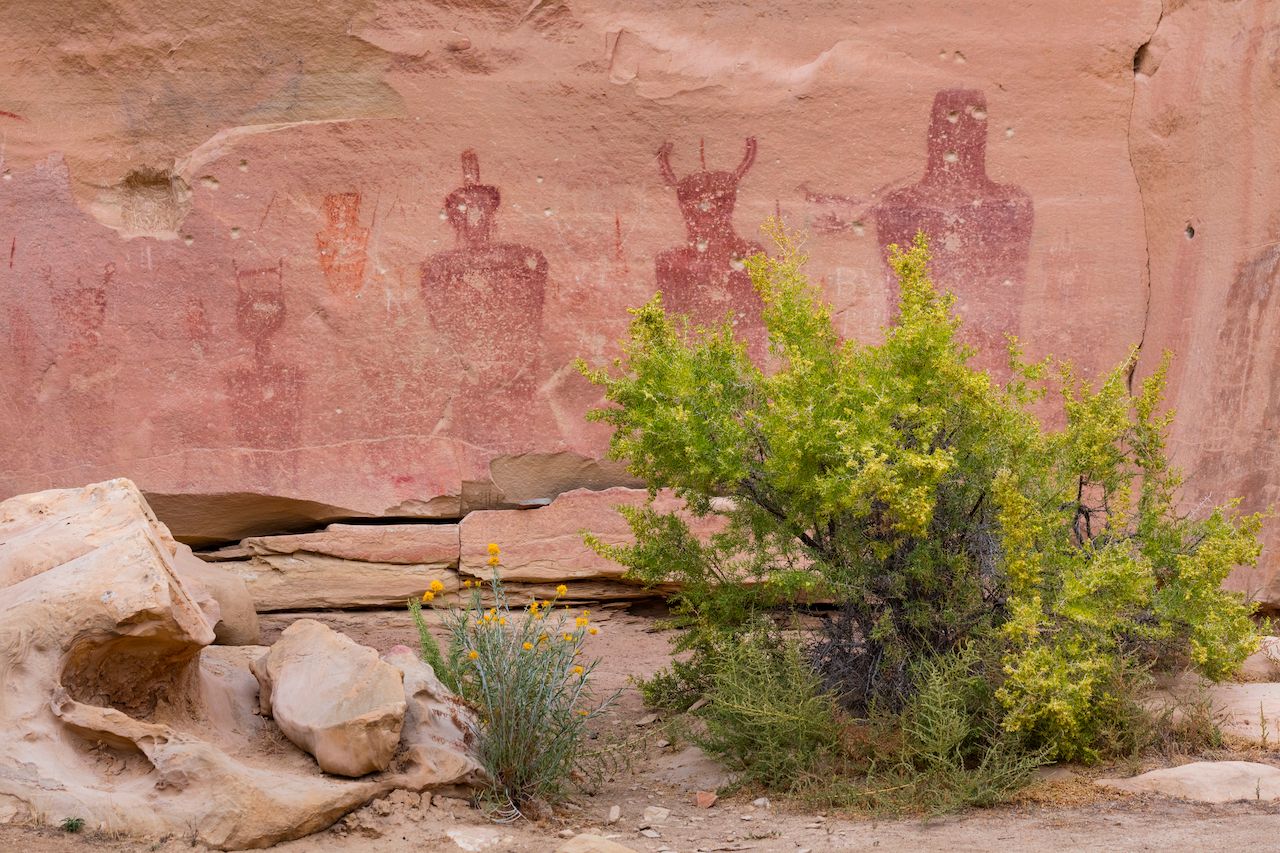 Barrier Canyon, now generally called Horseshoe Canyon, lies deep within the rugged Maze District of Canyonlands National Park, once a favorite hideout for the likes of Butch Cassidy and the Sundance Kid.

Archeologists have recovered artifacts from the canyon dating as far back as 9,000 B.C, when the place was still teeming with mammoths and giant bison. Most of the artwork, which Whitley calls “austere and enigmatic, but also an example of shamanistic aesthetic mastery,” is thought to have been made during the Late Archaic period, from 1,500 to 4,000 years ago.

The work of the Barrier Canyon people is exceptionally well preserved, in part because of the dryness of the climate, but also because access to the site is no small undertaking.

According to the Park Service, most contemporary visitors make the approach from the west rim trailhead, via a long stretch of graded dirt road from either Moab or Green River, Utah. The hike into the Great Gallery, through cottonwood groves along an intermittent stream, between sheer pink sandstone walls, is 6.5 miles round-trip, down and then back up again.

The only camping available is on the rim itself. No dogs are allowed in the canyon. Bring your own water. 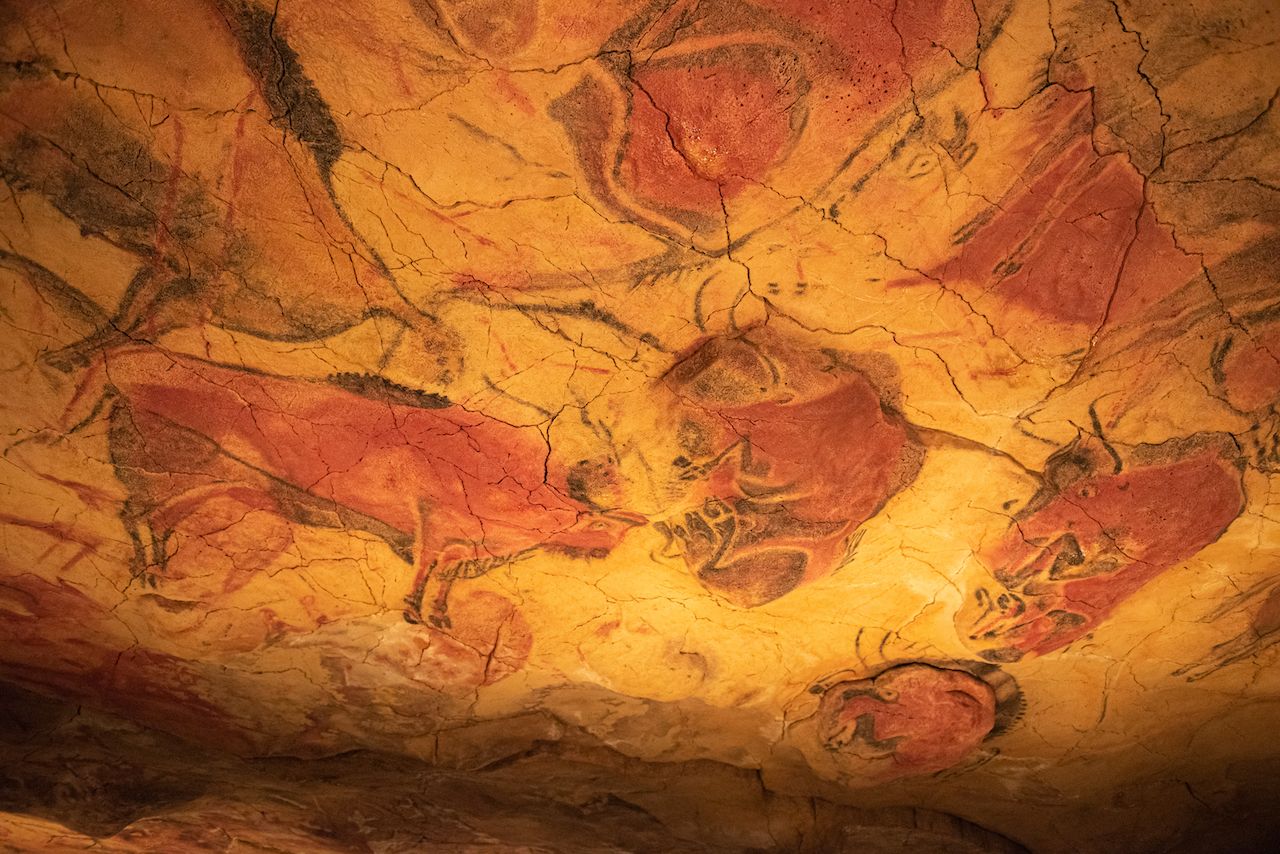 One day in 1994, a team of French cavers happened upon what is now considered the oldest rock art ever found, in the Chauvet Cave, near Vallon-Pont-d’Arc in the Ardèche region of southern France. For better or worse (better, it seems), the place has ever since been locked down to all but the most dedicated (and credentialed) scientists.

European paleolithic (or “Stone Age”) rock art is famous not only for its age but for its full-blown aesthetic mastery—and for its profound influence on the likes of Picasso, who visited the original caves at Lascaux in 1940 and famously emerged saying of modern art that “We have discovered nothing.”

“The ‘Chinese horse’ at Lascaux,” says Whitley, “is in every intro to art history book.”

Of the 350 documented cave art sites across Europe, from Gibraltar to the Urals, Lascaux (in the Dordogne) and Altamira (in Cantabria, near Santander) are generally considered the best. Both are World Heritage Sites. Both are considered severely endangered.

The original cave at Lascaux was closed to the public in 1963 because of visible CO2 damage from more than 20 years of heavy visitation. A replica was opened in 1983, dubbed Lascaux II, which Whitley says is “still worth the visit.” The original paintings are now being irreparably consumed by mold.

The caves at Altamira, said to represent “the apogee of Paleolithic cave art across Europe,” are also said to be better preserved. Still, while means of preservation are being studied, they too are off-limits to visitors. Meanwhile, check out the museum, with its replica caves, cultural exhibits, and restored native parkland. 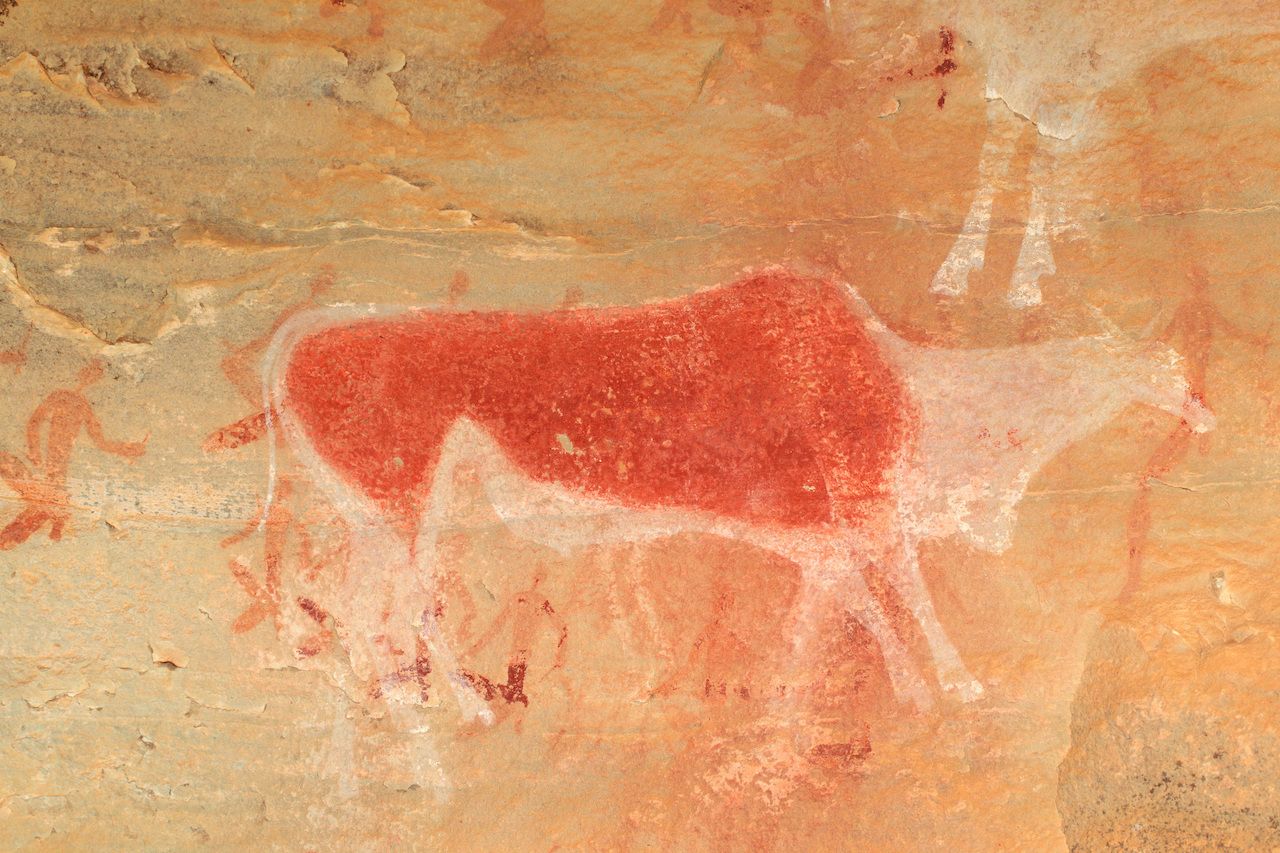 The rock art of the now-extinct San people, or bushmen, is considered by the World Heritage folks to be “the largest and most concentrated group of rock paintings in Africa south of the Sahara, outstanding both in quality and diversity of subject.”

Between Royal Natal and Bushmans Neck, in the vast uKhahlamba Drakensberg Park of South Africa’s Drakensberg, or “Dragon Mountains,” there are over 20,000 individual pictographs at 500 different sites, documenting 4,000 years in the lives of the bushmen, before they were exterminated in conflicts with the Zulu and white settlers.

Whitley’s favorite spots are the Game Pass Shelter, at Kamberg, and the Main Cave at the Giant’s Castle Nature Reserve, also popular with baboons, Eland antelope, and bearded vultures. 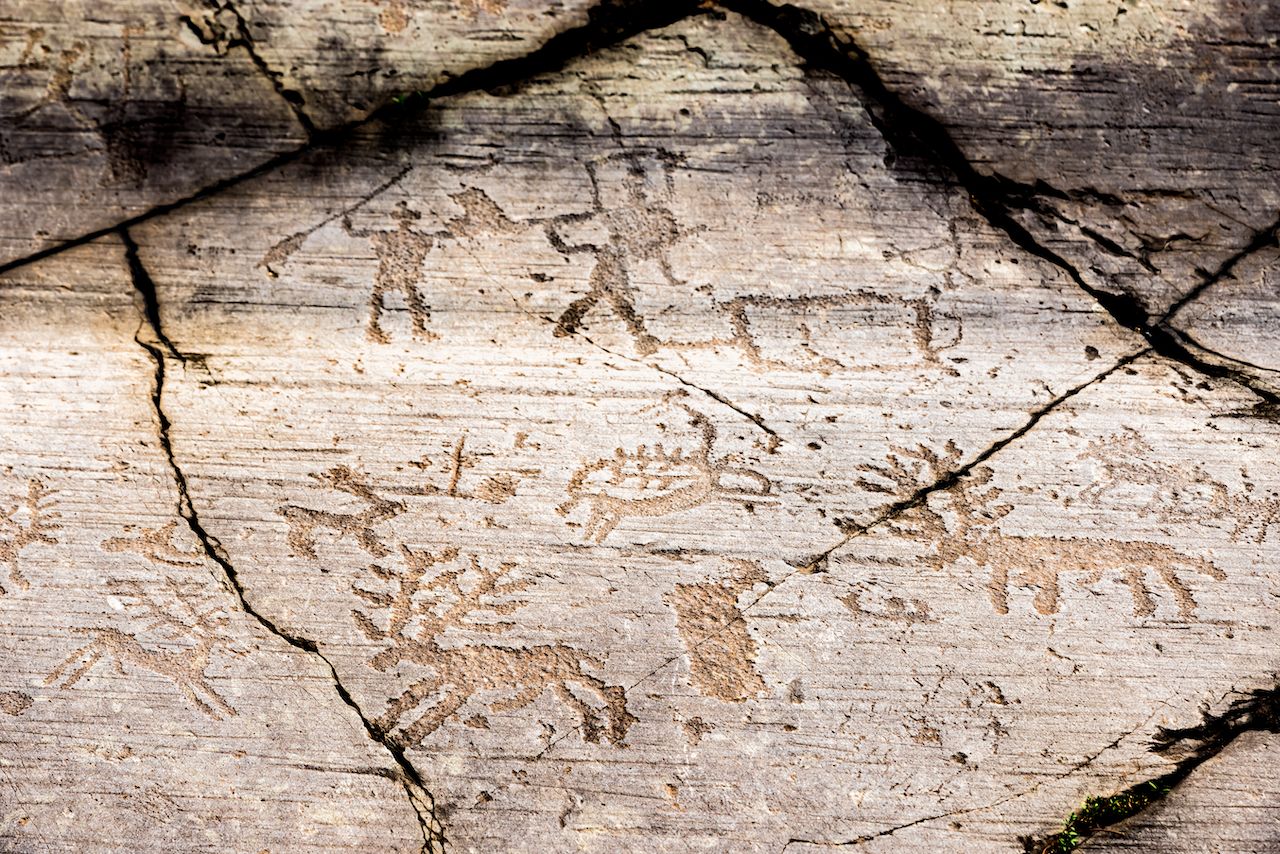 Valcamonica is a broad valley at the base of the Central Alps in eastern Lombardy, home to an enormous complex of ancient engravings—perhaps as many as 300,000 individual carvings dating from 10,000 years ago to the rise of the Roman Empire in the first century B.C.

“This is non-shamanistic art made by Neolithic and Bronze age farmers,” says Whitley, pointing out that these images were etched by the compatriots of Otzi the Ice Man, whose 5,300-year-old mummified corpse was found by two German hikers in 1991, immediately above Valcamonica.

Across the valley there are eight separate reserves and parks dedicated to rock art, including the Parco Nazionale delle Incisioni Rupestri di Naquane in Capo di Ponte.

For more petroglyphs on yet another continent, check out 15 Things You Can’t Miss in Australia.

For more contemporary wall-based work, check out 10 Places Where Graffiti is Legal.

Have you been to any of these places? Why were these sites chosen over all others? Oh, and what does it all mean? Give us a shout below.
china lake

May 7, 2021 Jeniffer Chiat
✖
travelstoke
Download the mobile app
stoked by