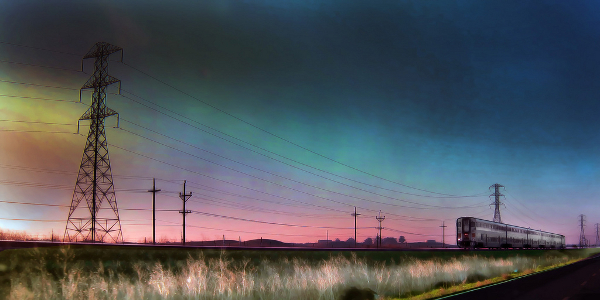 Adam Polonski shares what he learned during a month riding the Amtrak rails.

But for all its problems, some real and others imagined, Amtrak is still a great way to see America. Its routes cross through some of the country’s most remote and beautiful regions, many of which are hard to reach any other way. (Check out the unofficial Amtrak map mashup to see all the routes.)

More than any other form of transport, the rails give a sense of America’s history and immense size. Here are some ideas for making the most of the experience. 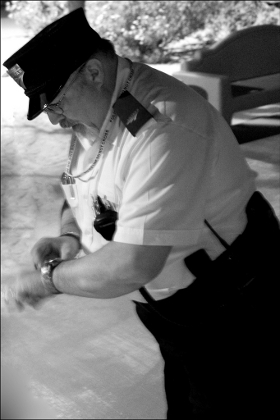 EU rail passes are a well-known and often-tapped resource for budget-conscious travelers. Amtrak has a pass too, although it’s not well advertised.

The prices may look steep, but the passes are substantially cheaper than buying individual tickets for each route.

Also, the separate California rail pass (good for 7 days of travel in a 21-day period; $159) provides a similar service for routes in the Golden State.

Beware: The Rail Pass is a bit complicated. It’s not a ticket; instead, it effectively entitles you to a certain number of free tickets. In addition to buying the pass, travelers must call Amtrak and reserve each leg of their itinerary at least 24 hours in advance.

2. Get a window seat

Sitting on a train for three days only to stare down the aisle while the majestic Rocky Mountains roll by the opposite windows sucks. Get to the station early to avoid this bummer.

Ask the car attendant which side is better to sit on. On some trips, like the Coast Starlight (Seattle-Los Angeles), it makes the difference between a window-ful of dense shrubbery and one of the Pacific Ocean. 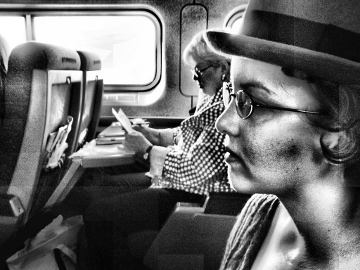 Sometimes one side offers more legroom than the other, as well. Of course, that isn’t always the side with the best view, so prepare for tough choices.

3. Get comfortable
(or get a sleeping car)

Unlike Amtrak’s commuter trains, like Acela, Pacific Surfliner, and Empire Service, the overnighters have large reclining seats with substantial legroom. They’re the size of business-class airline chairs, and good thing — if you’re in coach, you’ll be sleeping in them, possibly for days at a time. It’s bearable, but certainly not luxurious.

For travelers in groups, the sleeping cars are marginally better. Along with the extra modicum of privacy, the seats go fully horizontal, the car has a shower, and all meals in the dining car are free. But expect to pay several hundred dollars for the privilege.

Regardless, bring the obvious necessities — toothbrush, toothpaste, clothes, a water bottle, and lots of snacks. Amtrak will give you a pillow, but it’s not very large and you’ll want another.

And the train gets very cold at night, even in summer — be sure to bring a blanket. On my cross-country trip, my blanket was a constant source of jealousy from other passengers. 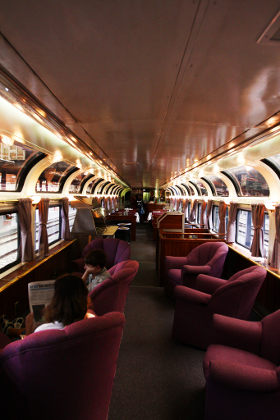 4. Get to the lounge car

All of Amtrak’s long-distance trains have lounge cars. On the longest routes west of Chicago, such as the Empire Builder and the Texas Eagle, the lounges are double-deckers with floor-to-ceiling windows, a café, and comfortable seating.

But they have much more to offer than a view. In the summer, volunteers from the Park Service’s Trails & Rails Program discuss the history of the train and its route — from Indian reservations to Western forts, from the Pecos River to the Rocky Mountains.

Sometimes, local musicians board the train for an accordion session. Don’t miss out.

But the lounge’s real highlight is the great pleasure of long-distance Amtrak travel in general: the people. Since a train trip costs the same as a flight and takes ten times as long, Amtrak attracts an unusual and diverse mix, most of whom are very chatty and will gladly start a conversation with anyone who’ll listen.

When I traveled, I met an 86-year-old Minnesotan farmer — a World War II veteran — who lectured me about the poor fertility of Montana soil, the cost of a large industrial tractor (over $500,000!), and how much longer grass-fed beef takes to cook compared to corn-fed beef.

I played cards with Texas hipsters for hours.

And, in one of the more awkward conversations of my life, a man introduced himself as a member of the Aryan Brotherhood, told me about his childhood growing up in remote rural Alaska, how much he liked Ron Paul, and how little he cared for “the blacks and Jews who rule the world.” Awkward.

Like I said. Interesting people ride the train. So get to the lounge and talk to them, and hope they aren’t Neo-Nazis, but just nice old ladies who spent the summer in Antarctica. 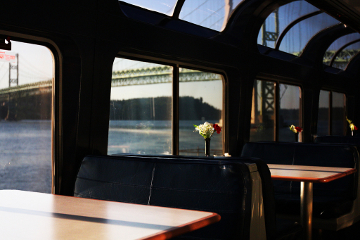 The dining car may be expensive, but it’s worth the price at least once.

Amtrak doesn’t serve meals on formal china anymore, except on the Coast Starlight. And when I ordered ice cream for dessert, my waiter literally threw me a pint of Haagen Daz from across the car.

Not the finest service. But watching the sun set over the Mississippi during dinner on the first night of the westbound Empire Builder, Amtrak’s flagship line that runs from Chicago to Seattle, is an elegant and beautiful reminder of the days gone by when trains ruled the travel world.

For much more, visit Matador’s focus page on train travel.