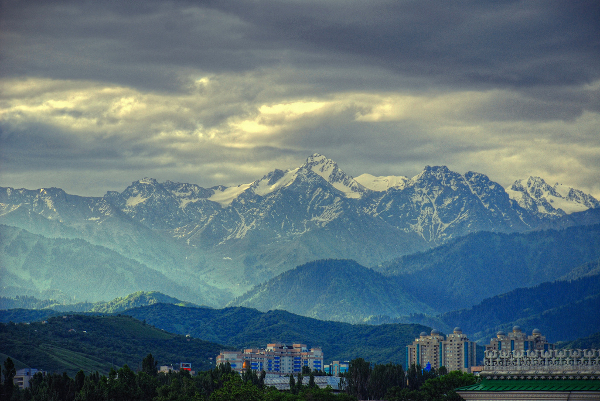 Stephen Lioy breaks down the visa and border crossing protocol for this pair of the Stan’s.

IF YOU PLANNED AHEAD for your trip to Central Asia, you were smart enough to get all your visas in your home country, leisurely, by mail. If not, prepare to be on very familiar terms with the capital cities of the region.

Being the only country in the region to offer visas on arrival, Kazakhstan is the obvious entry point for a trip through the Stan’s. Though the capital is Astana, the Uzbekistani embassy is in farther-south Almaty. It’s also a funner and cheaper city. Head there for your visa servicing needs. 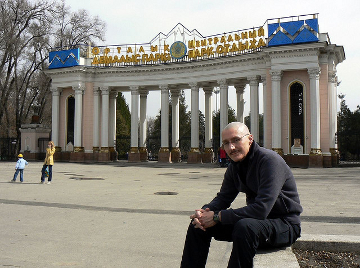 Getting an Uzbek Visa

The embassy in Almaty is at 36 Baribaev, just off Gogol and just west of the entrance to Gorky Park. Also conveniently located on Gogol are a couple shops selling food, alcohol, and cigarettes. The visa-applying traveler should consider stocking up on at least two of the three.

Though the specific days and costs of application are subject to change, the general method of obtaining an Uzbek visa stays the same: sit on the porch and wait.

Check times and dates with an email to StanTours before you go, but as of October ’10 the embassy was closed for visa applications Wednesday but open the rest of the workweek. The process can be a long one, so go on the first day you have free in Almaty.

Processing begins at noon, so try to arrive by at least 11am and convince one of the two guards to put your name on the list. Gestures of goodwill like food or cigarettes (see above) may ensure they remember you on your second or more trips and speed you through.

Being from a non-Russian-speaking country and throwing a few words out will also earn you good karma here. Going the extra step of learning some simple Kazakh or Uzbek phrases, more than most travelers in the region do, would probably merit even more. 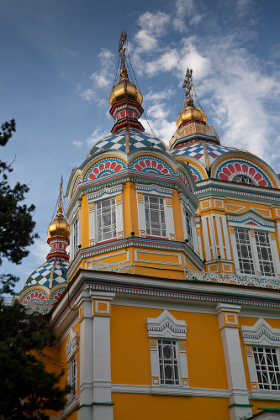 Somewhere between immediately and 6+ hours later, the guards should call your name to enter the embassy and hand in your application. Though it may be tempting to wander into the nearby park for a bit of relief during this interval, resist. Miss your call and you miss your chance.

For the moment, the embassy’s front porch is your only home. This is a great time to make friends — easy to do, especially if you practice the Russian alphabet where anyone else can see.

At this point, you should have all your documents in order, or the embassy officer WILL reject your application. Though costs differ by nationality, the necessary documents are the same for most countries outside of Central Asia: A passport valid for 6 months after entry, 2 passport photos, and an application form filled out and printed in duplicate beforehand.

Citizens of Great Britain, the USA, Austria, Belgium, Germany, Italy, France, Japan, Spain, and Switzerland currently do not require a Letter of Invitation. All others (currently) do.

If you’ve prepared an LoI through a travel agency, then congratulations. After paying you should have a visa in hand and no need to come back.

If not, the officer will give you a date to return. This will likely be in a week or longer, so get out of Almaty and check out Charyn Canyon or a homestay at Aksai Gorge, among other nearby possibilities. I arranged my trips through Ecotourism Kazakhstan. There’s not much public transport to areas outside of population centers, so other than self-driving there aren’t many options. 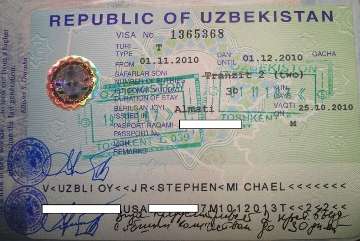 On the day you return to the embassy, pack a stack of clean and fresh USD and repeat the process.

Costs differ by country, but a double-entry, 30-day visa for a U.S. passport costs $140. Japan wins this round, coming in close to $20. Most of the developed world sits somewhere in between.

Make sure to check this information during your first stint on the porch, to know for sure how much to bring with you.

Insha’Allah, your visa will be waiting for you. If not, take the suggested date of return with a smile (rather than whatever expletive would be your first reaction) and come back later for another try.

Once you leave with your visa, you may realize you’ve been given a 3-day, double-entry transit visa rather than the 30-day, double-entry tourist visa you applied for. Go back in and ask nicely, and the officer will hopefully bring out his official pen and scratch the situation into correction.

Nearly two weeks after arriving in Almaty, you finally have a visa! 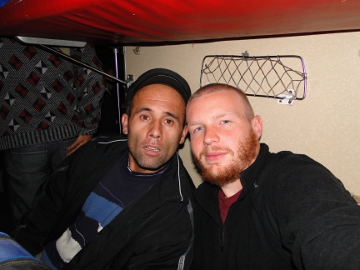 The author meets a smuggler on the train.

Those desiring an efficient and cheap way across the border to Tashkent should take a bus or taxi from Shymkent. Those who are excited to arrive precisely at the time their visa turns valid, however, should consider Train 321.

Leaving at 2:46am, this train takes just under 7 hours to traverse the 230km of track. The upside, aside from the smugglers you may meet en route, is the possibility of arriving in Tashkent on the morning your visa starts.

At the actual border, fill out the customs declaration and make sure to list everything electronic/bejeweled/expensive that you carry into the country. Otherwise, you may face problems and fines from customs agents looking to supplement their salary at your expense.

Change money with the train station’s black market dealers, and ask the ticket vendors to run the whole stack through the auto-counter for you. $100 is around 220 bills of the largest Som note, so it pays to have them count the stacks of 1000’s. Once the count is right, Tashkent is yours. 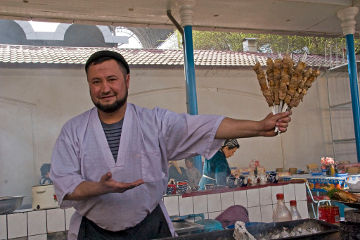 Skip the cabs and find the beautiful metro station to whisk you under the city to your guesthouse. It’s worth mentioning there was a healthy couchsurfing community in Tashkent when I was there, if you’re into that scene.

Drop your bags, grab a plate of breakfast plov, and make the most of your stay. The longer you’re in the country, the less per day the visa costs!

For another dispatch from the Stan’s, try Going Nomad in Kyrgyzstan.

To see the best art and architecture in Tashkent, ride the subway

Big In The Stans Episode 12: The final gig and homebound

Big In The Stans Episode 10: “How much to make the party continue?”