BRITISH COLUMBIA is my home. I was born, grew up, and live in this wonderful and wild part of the world. A couple of years ago I was fortunate to go on assignment into the Great Bear Rainforest, but despite my praying and pleading I did not get to see any bears. That’s nature for you. Once I set aside my jealousy of filmmaker Spencer Cordovano’s recent trip to film the Spirit Bear (Moksgm’ol to the First Nations people) I sat entranced by the footage and the story being told by his Gitga’at guide, Marven Robinson.

When watching a film like this it’s easy to take for granted what goes into producing it; that’s part of the magic and what makes filmmaking so intriguing to me. I became interested in what went on behind the scenes leading up to, during, and after this shoot. Big thanks to Spencer for taking the time to answer my questions; he has a lot of great insight and advice for any budding filmmaker out there.

MN: What was the first thing you did when you landed the assignment and learned more about what you’d be shooting?

SC: This came up super last minute so I stayed up all night packing! I was headed on another trip first, and had to dig out my personal rain gear and camera covers etc. However this type of work is my speciality, I specialize in remote location shoots, and being around wildlife does not bother me. I’m a conservationist and a hunter so operating in the wild is what I’m used to. It didn’t seem far fetched to me at all.

How important is research prior to the trip?

Research is very important prior to the trip. First off you need to know what you’re advertising and why. Secondly, for this shoot this is sacred stuff, you can’t show up and say, “so why are these bears special?” That would have ruined our group dynamic by having our guide be disrespected. Since I was on such short notice and since this is a sacred topic we had a fixer on the shoot to help get us up there and provoke some interview questions.

Before you left, did you have a good idea of the story you wanted to produce, or did that unfold more spontaneously during the trip?

This is what I love about my job. You pack up all this gear, batteries, lenses and head up there to produce this epic story and get all this great footage but then it unfolds however it does and you are constantly adapting. It stresses me out and gives me a thrill you have all the tools to make it happen but the exact how-it-will-look are all spur of the moment decisions. Generally speaking I like being in video production because my team and I are in and out of a variety of businesses and characters on the day to day basis; every week it’s a new topic!

Once you had an idea of the story, how did you visualize what types of shots you wanted to include in the film?

This is the tricky part, especially when filming wildlife: The bear doesn’t really care about your dates or deadlines! It was comforting to know my Matador producer saw this coming, and told me we could purchase footage of we didn’t see the bear, no stress. However we got the epic salmon shot and most of the sunny footage within the first 2 hours on the shoot! So I was more focused on telling the story of Marven Robinson’s day to day operations, which is really important. Bears eating salmon is great but showing Marv walk through the forest, guide a group, and present the bears is the key. It makes sure everyone realizes this a safe and humane way to get up close and personal with the bears. Without Marv, the bears would not be as well off as they are now. As the principal cinematographer and editor my biggest decision was who to bring from my team, to back me up. Who can operate in this environment? My regular second camera and Chief drone pilot was on another shoot, so I had to make a few calls. Actually there was only one person for me to bring and that was Axel Peterson. Axel is super functional in remote locations and a great guy to travel with.

Can you share any logistical tools you use in the process? Like a shot list, or a way to organize your footage to make it easier to find later on?

I had a lot of rain gear, rain covers, gimbals, etc but all of that was in my duffel bag that never made it to Canada! I did this shoot in gas station clothes and some knock off rain boots I picked up at the only store open before 7 am in Vancouver; since we were on such a tight timeline we just had to move forward! My cameras and body really paid for this to a degree Delta Airlines will never understand. This is a great take away from the shoot though, for remote locations and generally speaking it is not about what gear is the latest and greatest. It is about how you use what you got. Cameras and lenses are great these days — don’t think someone is good because they have all the Canon gear and fancy gimbals. Second take away, and words to live by, ALWAYS carry on enough gear to make something happen! If I didn’t have my sound equipment and majority of lenses in my carry on we would not be here today. There is a Pelican case that is FAA approved to fit any carry on, anywhere, best $120 bucks I’ve spent in while! 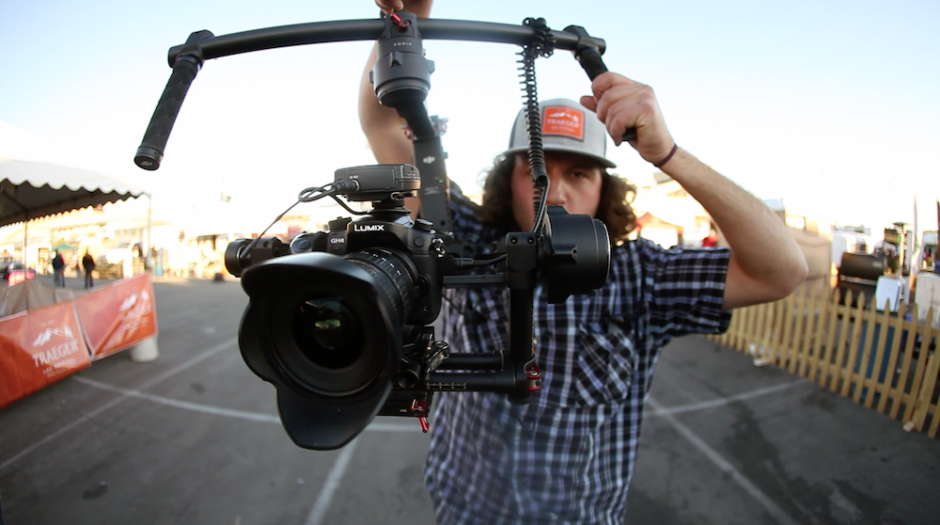 When you’re interviewing someone on-camera, do you instruct/direct them in any way? What do you say to them before you starting shooting?

Before an interview I always ask the subject to answer in complete sentences since my voice will not be in it. When setting up I use someone on my crew to finalize framing then we ask the subject to enter the frame. [As a subject] it’s quite never racking to have two or three cameras staring at you. Subject comfort is huge; when someone is uncomfortable and their voice starts to shake your interview and possibly whole shoot is over. I usually crack a joke and remind them they can back up on their words and sometimes I’ll even sit down to make it feel more relaxed (though not recommended!).

Once you have all the footage and you’re back at home, what are the first steps before you begin editing?

As the shoot goes on all the footage is double backed up regularly. When we travel home I always send a back up drive with someone on a different flight path. If it’s just me I have one on my person at all times and one in checked baggage as well. My drives will never be in the same spot in case of theft, fire, or water. I haven’t had an incident yet but I’ve heard horror stories. Back at the office organization is key: I sort all footage by date, cinematographer, and frame rate or size. It’s not worth starting the edit until it’s fully organized.

How do you choose your music?

Music is the hardest part of making a good edit these days! We all want to edit to the latest and greatest hits however the copyright issues are insurmountable. There are a variety of licesened music sites in all ranges of quality and price out there. Finding a good song is definetly the leader in unbillable hours these days. Filtering through licensed music makes me sick!

When telling a story like this, what would you say are the three most important considerations?

The three most important parts of telling this story are the same thing we learned when writing a paragraph in elementary school. You need a bitchin’ topic sentence to lure the viewer and it needs to be relevant. The middle of the story needs to explain the subject and subject matter — for me this meant explaining this was not an albino or polar bear right away, this is the viewers first question! Then you get into the details and bring it home.

How long did it take you to edit this?

This edit took me about 5 full days. I worked the interview and story line for a good two days before I started to overlay the footage. Epic bear footage is great but storyline is everything! The overlays fell into place easily however. When filming wildlife without a pre-record option you fill a lot of space…quite consuming on the editing and time. Also there was set budget for this project, so as much as I would have liked to spend a month with it I had a time frame.

After publication, are you already onto the next project, or do you spend some time promoting it? How do you do that?

Well for me I don’t do distribution, I produce videos for distributors. I was on the next project ASAP. I usually am juggling two projects at once. I will be doing some advertising of this project for sure, I hope it can get me onto some more wildlife shoots etc, and there may be some more spirit bear things in the works. it’s been wrapped since October and now that it’s public it’s time for me to advertise. However I’m presently on vacation in Baja so I hope next week works for the world!

Check out Spencer’s summer aerial video in Idaho and more of his work here on his Vimeo page, Spencer Cordovano Video and Production.