THE USUAL COLLECTION of travel quotes tend to focus on inspiration and reflection. These, however, are meant to tickle your funny bone, and remind you of the inherent humor of the journey.

“Kilometers are shorter than miles. Save gas, take your next trip in kilometers.” -George Carlin

“Too often travel, instead of broadening the mind, merely lengthens the conversations.” -Elizabeth Drew

“Another well-known Paris landmark is the Arc de Triomphe, a moving monument to the many brave women and men who have died trying to visit it.” –Dave Barry

“The major advantage of domestic travel is that, with a few exceptions such as Miami, most domestic locations are conveniently situated right here in the United States.” –Dave Barry

“Thanks to the interstate highway system, it is now possible to travel from coast to coast without seeing anything.” –Charles Kuralt

“The worst thing about being a tourist is having other tourists recognize you as a tourist.” –Russell Baker

“You can find your way across this country using burger joints the way a navigator uses stars.” –Charles Kuralt

“You got to be careful if you don’t know where you’re going, because you might not get there.” –Yogi Berra

“Do not insult the mother alligator until after you have crossed the river.” –Old Haitian Proverb

“Canada is the vichyssoise of nations — it’s cold, half French, and difficult to stir.” –Stuart Keate

“On a New York subway you get fined for spitting, but you can throw up for nothing.” –Lewis Grizzard

“Gaiety is among the most outstanding features of the Soviet Union.” –Joseph Stalin

“San Francisco is like granola. Take away all the fruits and the nuts and all you have left are the flakes.” –Unknown

“France is the only country where the money falls apart and you can’t tear the toilet paper.” –Billy Wilder

“Boy, those French. They have a different word for everything.” –Steve Martin

“Climbing K2 or floating the Grand Canyon in an inner tube. There are some things one would rather have done than do.” –Edward Abbey

“There is science, logic, reason; there is thought verified by experience. And then there is California.” –Edward Abbey

“If you are going through hell, keep going.” –Winston Churchill

“I told the doctor I broke my leg in two places. He told me to quit going to those places”. -Henny Youngman

“Two great talkers will not travel far together.” -Spanish Proverb

“Why buy good luggage? You only use it when you travel.” –Yogi Berra

“I dislike feeling at home when I am abroad.” -George Bernard Shaw

“I had a prejudice against the British until I discovered that fifty percent of them were female.” –Raymond Floyd

“Living on Earth is expensive, but it does include a free trip around the sun every year.” -Unknown

“When preparing to travel, lay out all your clothes and all your money. Then take half the clothes and twice the money”. -Unknown

“Go to Heaven for the climate, Hell for the company.” –Mark Twain

Add your favorite funny travel quotes in the comments section below! 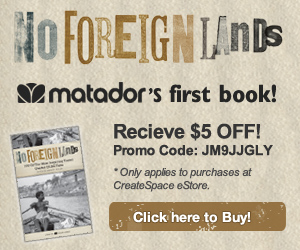 Partly inspired by this article and its thousands of readers, Matador published No Foreign Lands. The book takes 100 of the most memorable quotes ever spoken or written about travel, and juxtaposes them over striking travel images from Matador’s extended community of photographers.

CultureThe (Next) 50 Most Inspiring Travel Quotes of All Time
Tagged
Travel
What did you think of this story?
Meh
Good
Awesome