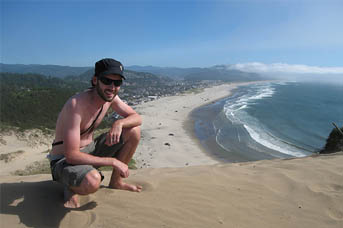 Atop a sand dune along the Oregon Coast

A few readers may have noticed last week was a little sparse in Brave New Traveler updates.

This was not intentional. Basically I had future-posted new articles throughout the week, but some decided not to publish.

And I wasn’t around to check out the issue because I was road-tripping to San Francisco to meet much of the Matador Crew for the first time.

I’ve been working virtually with most of the team since BNT joined the network back in January, and since then I’ve known the other editors (and writers) entirely by their voices. What a trip to finally meet them in person, and open up a whole new dimension to our interaction.

It was my first time to San Francisco as well. The big event held Saturday night was the Matador Party, a fundraiser to send inner-city youth abroad for travel experiences of their own (via the Matador Travel Scholarship).

Now, after the roadtrip, I’m back home and gearing up for some big posts on BNT. Also, I’m always looking for feedback from the readers on what you like, what you don’t like, and what you’d like to see develop in the near future.

If you have any article ideas, check out our contributor guidelines, and send in your pitches!