Beijing has been inhabited for millennia. The current iteration of the city, its diverse neighborhoods in particular, reflect the influences of eras gone by. For a large part of Beijing’s existence, the city’s layout reflected a belief that the Emperor — who resided in the silent, stately Forbidden City at the center of it all — had been selected by gods to rule the nation. The imperial palace, as well as temples at each of the cardinal directions beyond its walls, displayed the ideal of all things in balance. But outside of the Forbidden City’s walls was the “citizen’s Beijing.” This is where the homes of commoners lined narrow hutong alleyways.

Today, these areas can still be considered the citizen’s Beijing. Traditional neighborhoods like Gulou and Dashilanr give visitors a sense of the lifestyle that dominated “Old Beijing” for centuries while modern neighborhoods like trendy Sanlitun and artsy 798 show Beijing’s cosmopolitan side. With a city as large as this, rest assured that whatever you want to see and experience, it’s available in Beijing. 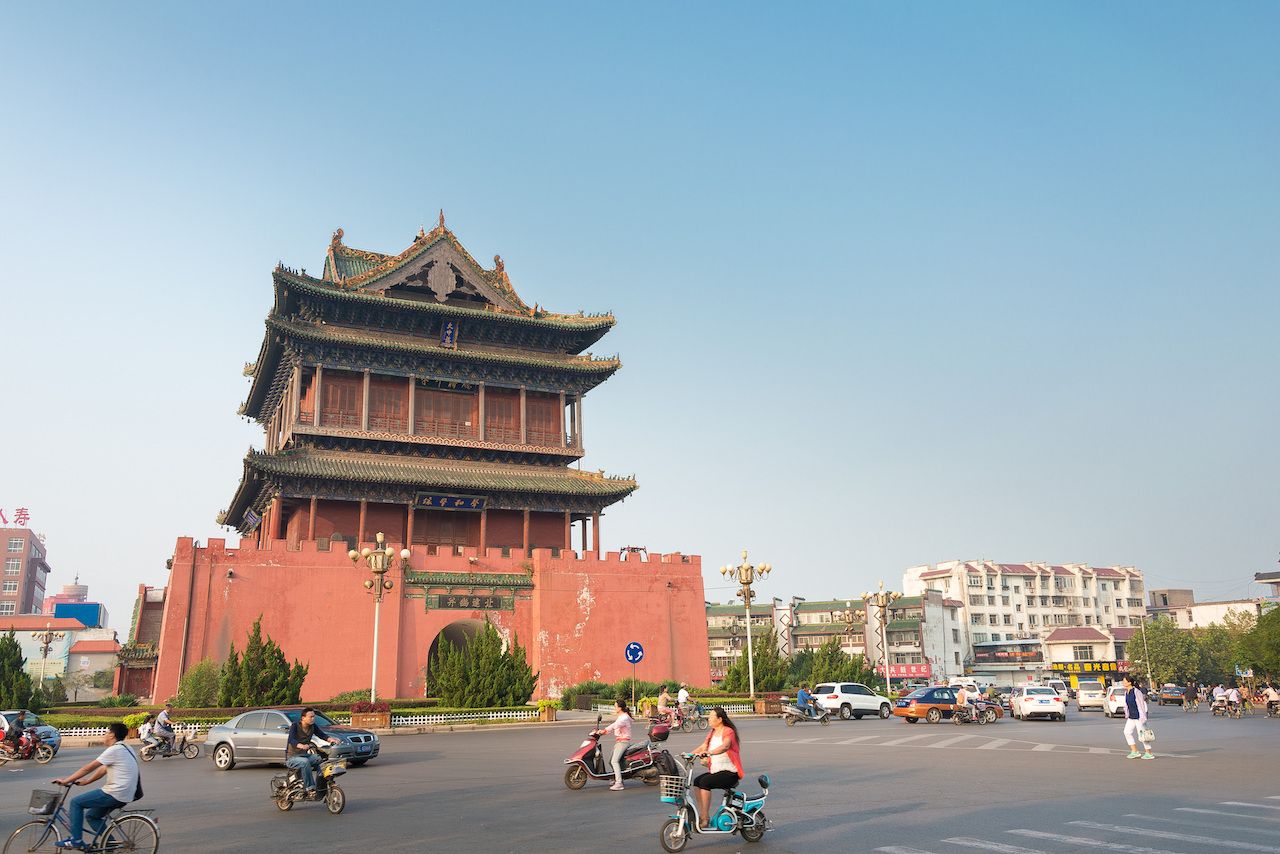 Gulou — Gulou, which means “Drum Tower,” is dominated by Gulou Dongdajie, the area’s main commercial thoroughfare. There you can find all sorts of hip shops, diverse restaurants, and nightlife options. At the west end of the main street is the actual Drum Tower and Bell Tower. These structures, while they appear small in stature today, dominated the skyline of Beijing within just the last century. When the weather and air are nice, the open square between the two structures is used by locals for roller skating, kite flying, singing, or playing board games.

This neighborhood is hutong-heavy (hutongs are narrow lanes that made up the residential gridwork of Beijing for centuries and are usually constructed with grey brick). Visitors should get off the main drag and away from the crowds to explore the hutong and get an idea of what the city was like when siheyuan (traditional courtyard homes) were the primary dwelling. 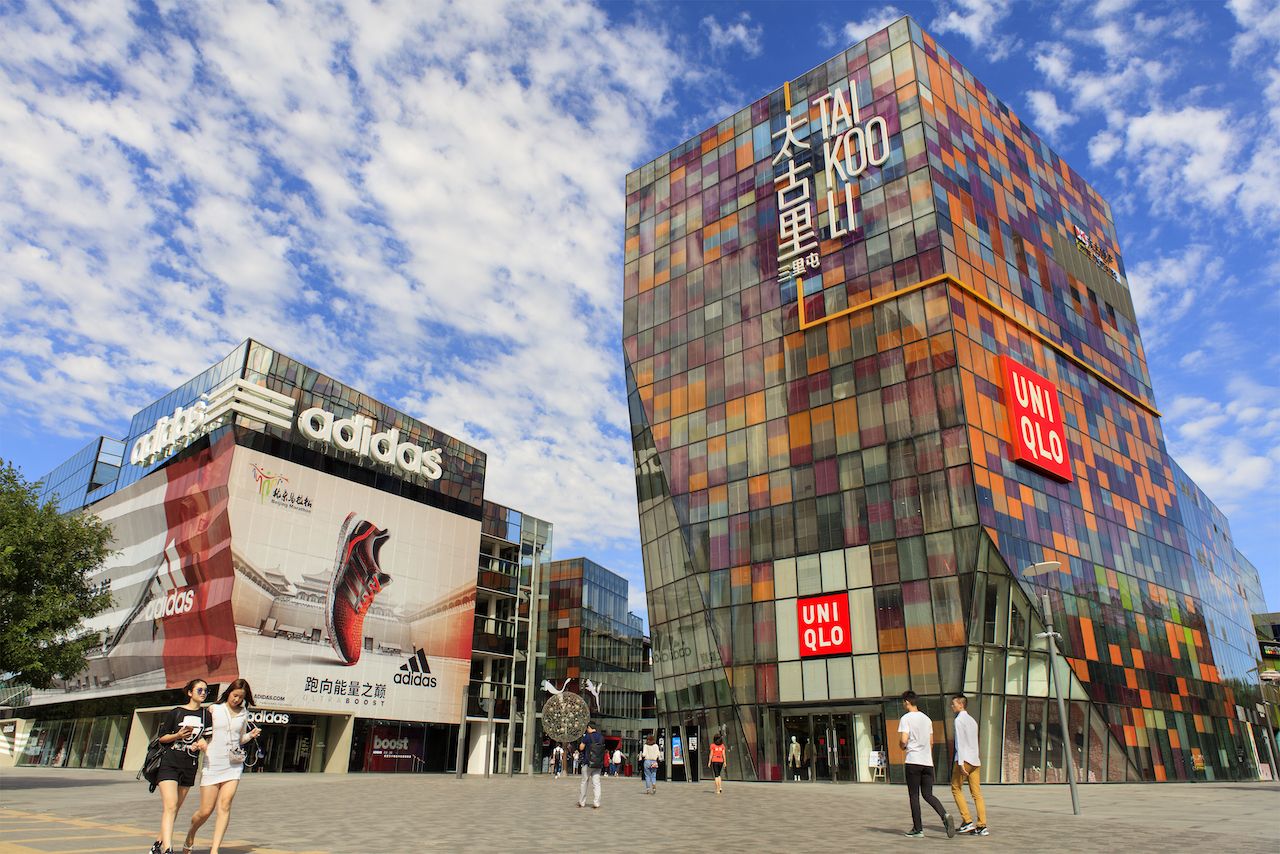 Sanlitun — Sanlitun is the place to see and be seen, as well as the epicenter of many expats’ existence. This posh commercial district bordered by pristinely kept embassies revolves around the multi-floor Taikoo Li shopping center. A manageable mall with an open center, it hosts domestic and international luxury brands, eateries, and pop-up shops.

Even if burning through some RMB doesn’t entice you, take a stroll around the ground level as the window displays are works of art. The Korean sunglasses brand Gentle Monster store, for example, seems more like an interactive art exhibit than a place to pick up something as mundane as eyewear.

The Sanlitun neighborhood, which centers around a north-south running street by the same name, provides a ton of dining options. Nali Patio and Moka Bros are popular with expats and visitors; the latter is a great place for health-conscious, casual fare.

In the evening, the street is bumping — each bar seems to try to drown out the sound of its neighbors. For something more low key, check out the beautifully retro movie theater Cinker Pictures. They play current and old films, with classic titles like Taxi Driver and Before Sunset making their marquis. 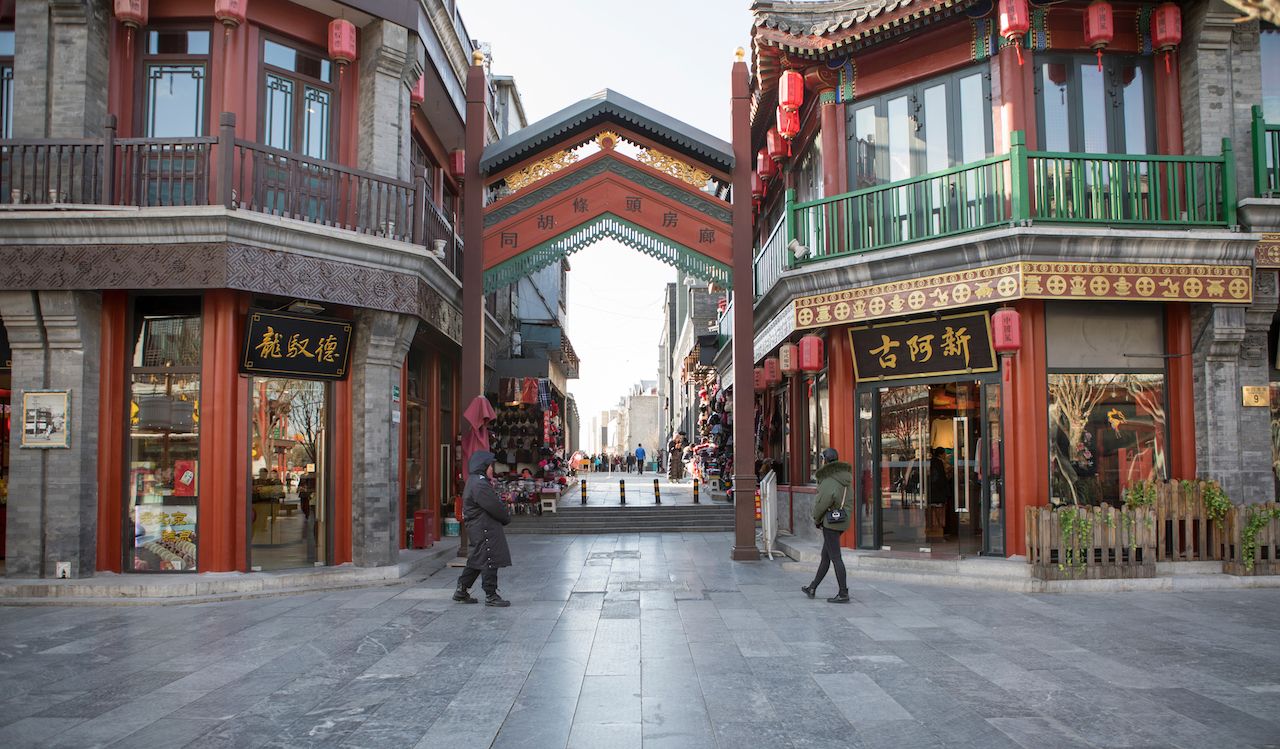 Dashilanr — Pronounced “Dashilar,” this area is one of the city’s heritage neighborhoods. Starting out as imperial Beijing’s original central business district, it served the emissaries and dignitaries of the neighboring Forbidden City (something as lowly as commerce was not allowed on palace grounds). Later, the district became home to artistic types, including Peking Opera performers. When performance opportunities ran short, actors or singers might turn to prostitution, which meant this area doubled as an early red light district.

Daguanlou, one of the world’s oldest continually running cinemas, offers the city’s most historic and intimate viewing experience — a screening room that seats fewer than 20 on plush red couches. Nearby, visitors can also indulge in a cup of third-wave coffee at Soloist while peering out over the historic hutong. Down the lane, check out the cool zine shop Boismou. 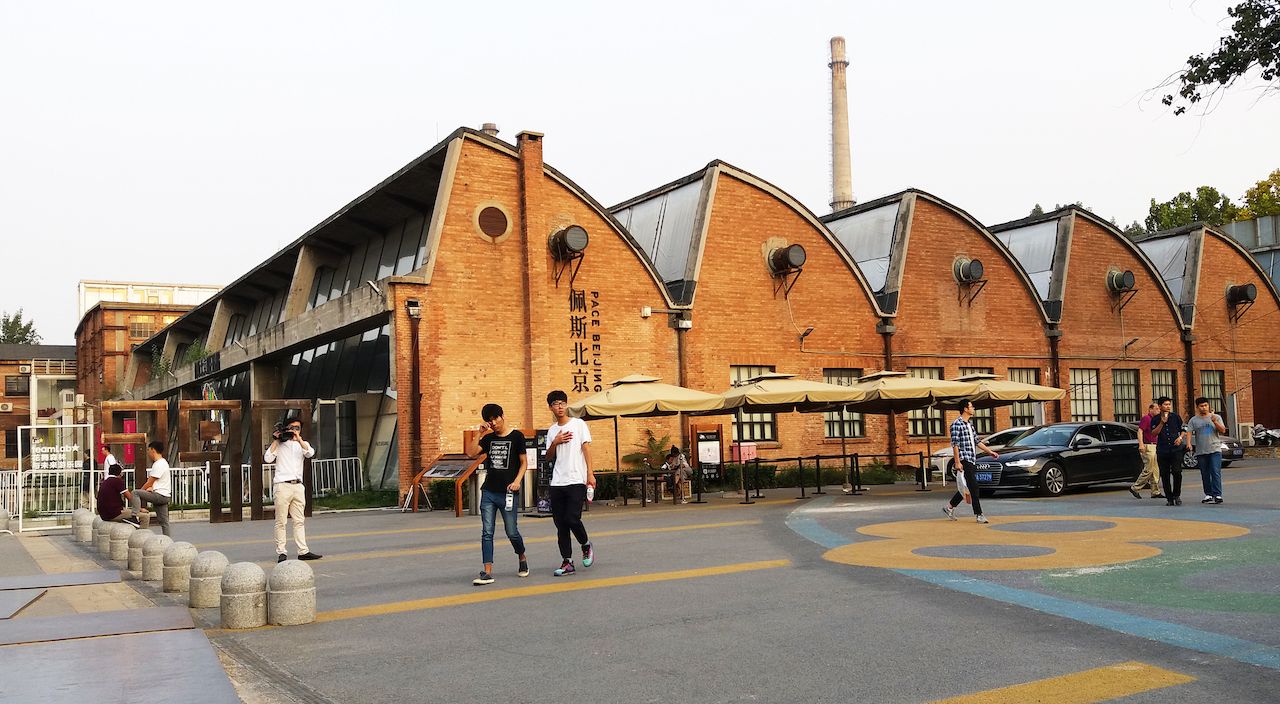 798 Art District — The 798 neighborhood is an East German-built military factory area transformed into a pedestrian-friendly art zone. The Bauhaus and brutalist-inspired buildings of the neighborhood also stand out in the city’s architectural landscape. Most of Beijing’s distinctive buildings are dominated by either imperial opulence (Forbidden City), stylish traditional (hutongs), or massive futurist (CCTV tower and Olympic structures).

There are many boutique art galleries to dip into, as well as larger art museums. The Ullens Center for Contemporary Art (UCCA) is an independent, not-for-profit center founded by Belgian art collectors in 2007. The three-story space is massive, so check the exhibit information in advance to make sure your time is spent wisely.

The 798 Photo Gallery is another major league museum. Keeping in line with the distinct architecture of the 798 district, the look of the original Bauhaus style space has been maintained. One of the walls exhibits a slogan in red paint, “Long live Chairman Mao, for a hundred million years.”

Either before or after your trip to 798, be sure to stop by one of Beijing’s best breakfast/brunch spots — the Green Cow Cafe. This cafe is on the frontline for organic options in Beijing. 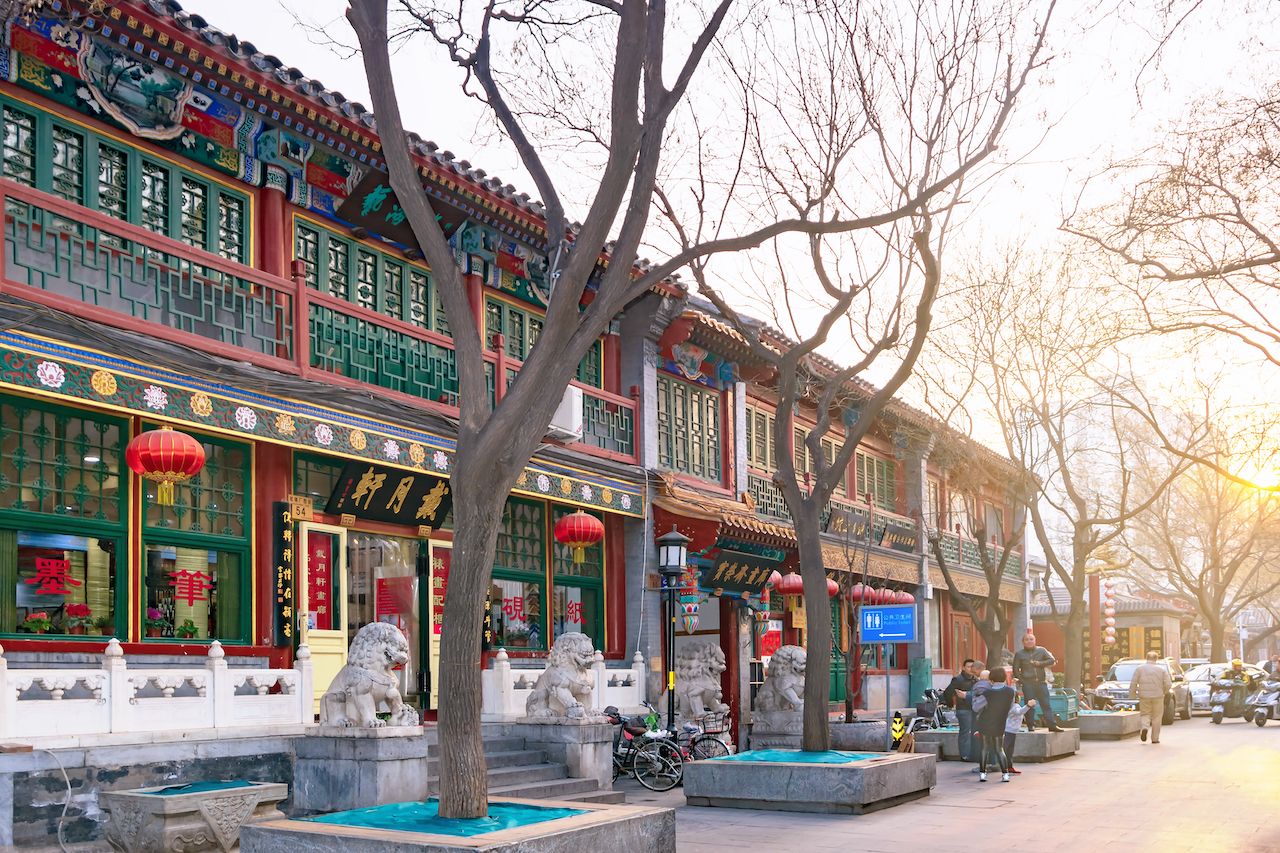 Liulichang — While this area has been renovated in recent years, and may have lost some of its original vitality, it is still worth a visit to see local handicrafts in a hutong neighborhood setting. Just adjacent to the Dashilanr area, Liulichang takes its name from the colored glaze tile factory that was previously located there. The factory had produced the glossy, semi-circular tiles that adorned the roofs of palaces, temples, and official residences throughout Beijing. While the factory is no longer in operation, it still lends a historic vibe to the neighborhood. Antique shops now line the street and sell everything from calligraphy to carpets. 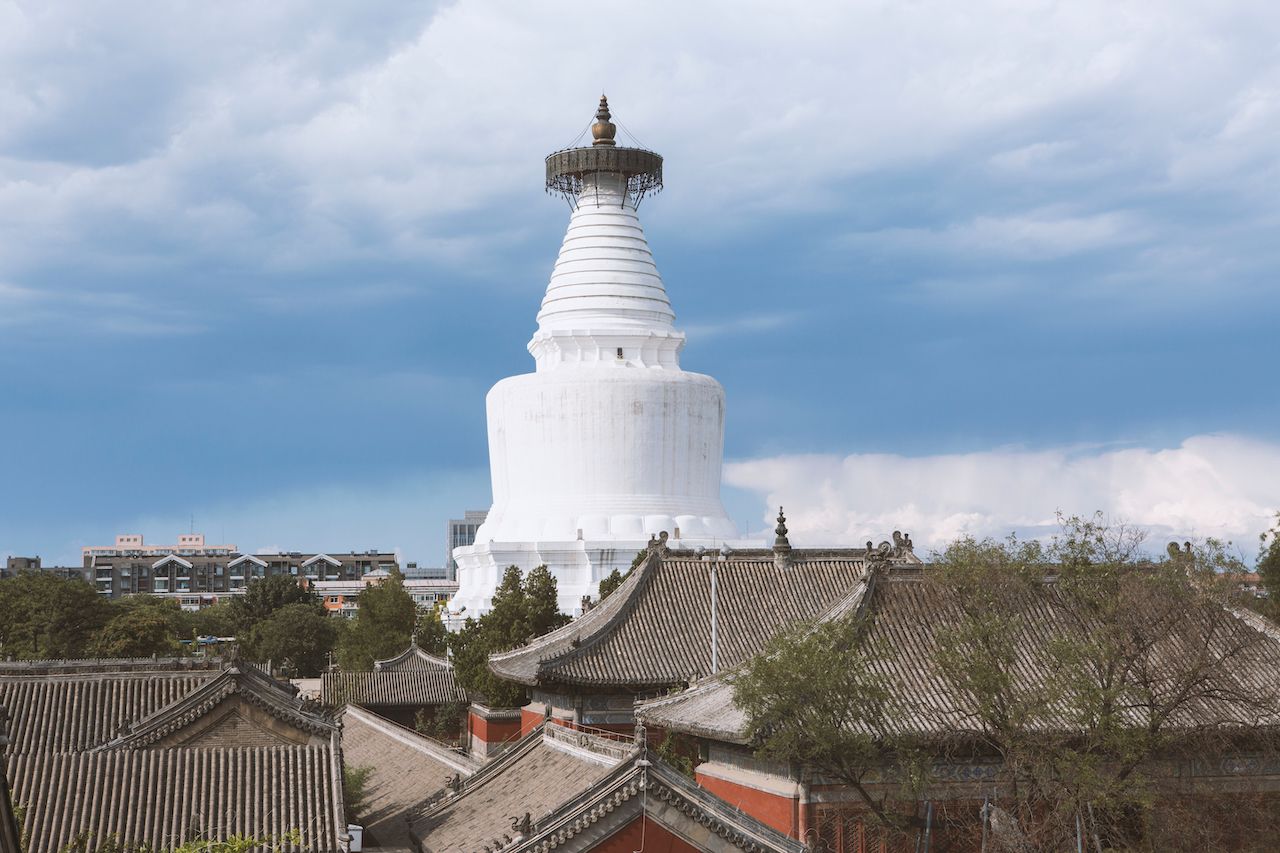 Xisi — This neighborhood, located on the western side of central Beijing, tends to be a little quieter than the eastern districts and a bit off the beaten path for visitors. It’s worth the trip, however, as it offers the most amazing coffee shop view in the country, as well as historic architecture.

Perched on the rooftop of Bear Brew, sip on a cup of coffee while contemplating the serenity of White Cloud Pagoda. The pagoda is the oldest known presence of Tibetan Buddhism in China. Its towering height is accentuated by the low hutong bungalows that surround it. While in Xisi, or “Western Four,” one must also visit the Church of Our Savior, a beautifully ornate Roman Catholic Church, its tall spire bookended on either side by red Chinese pagodas. Inside, the brightly colored stained glass displays images of the Twelve Stations of the Cross, as well as Chinese monks and the Temple of Heaven.