Beijing, a massive metropolis with an arid climate, does not have a lot of greenery that thrives naturally in its dense gridwork. Thankfully, however, the earliest city planners made sure to incorporate temple parks into the capital’s design. That means Beijing has many parks that are very centrally located and can be worked into most travel itineraries. In addition, Beijing parks tend to be havens of leisure for older residents, which always makes for great people watching. 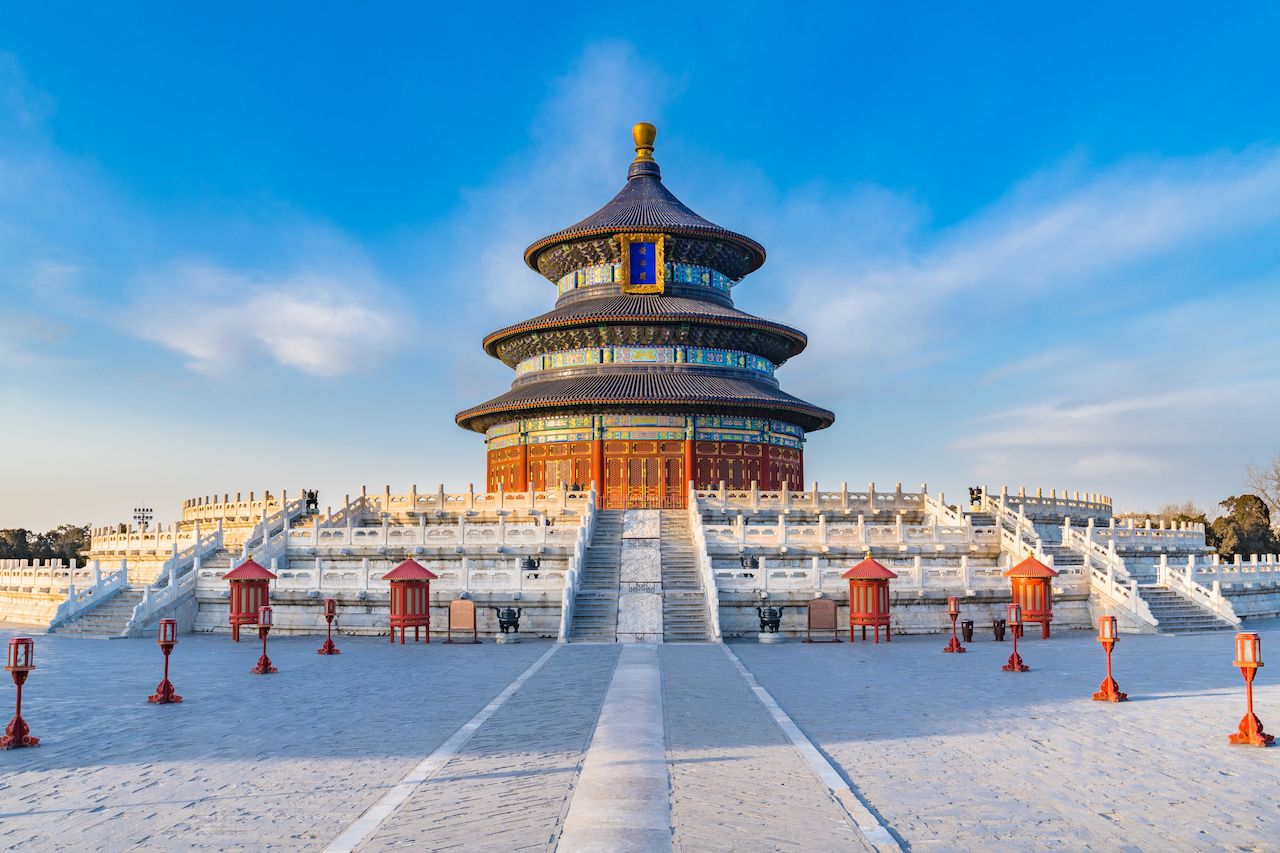 Temple of Heaven (Tiantan Park) — This lively and sprawling park is also a historic site and the largest existing sacrificial complex built in ancient times. Throughout the Ming and Qing dynasties, the place was a site of ritual prayer for good harvests. The aptly named “Hall of Prayer for Good Harvests” is the largest structure within the park, and it’s a good walking distance from the main entrance — given that the entire park covers over 650 acres.

This structure, standing at almost 130 feet tall, was built without using a single nail or a drop of cement. Originally constructed in 1420, it was struck by lightning and reduced to ashes in 1889; the hall we see today was rebuilt in 1890. As the hall is surrounded by nothing but open space, it seems to tower above you, displaying its beautiful carved woodwork and perfect concentric symmetry.

You’ll find the park is busy at all times of day but particularly on the weekends. Locals bring speakers and will sing their hearts out for anyone’s listening pleasure while hoards of retirees gather over loudly played card games. There are long open walkways covered by wooden awnings that can provide refuge from any elements; wide handrails tracing the perimeter also double as benches to hoards of people playing board games.

It’s a pleasant public space where people are at a more relaxed pace. Out of the collection of historic temples that ring the Forbidden City — there’s also a temple for Earth, Sun, and Moon — this one is certainly the liveliest. It is also conveniently located near Tiananmen Square (to its north) and the hutong-heavy historic neighborhood of Dashilar (to its west). 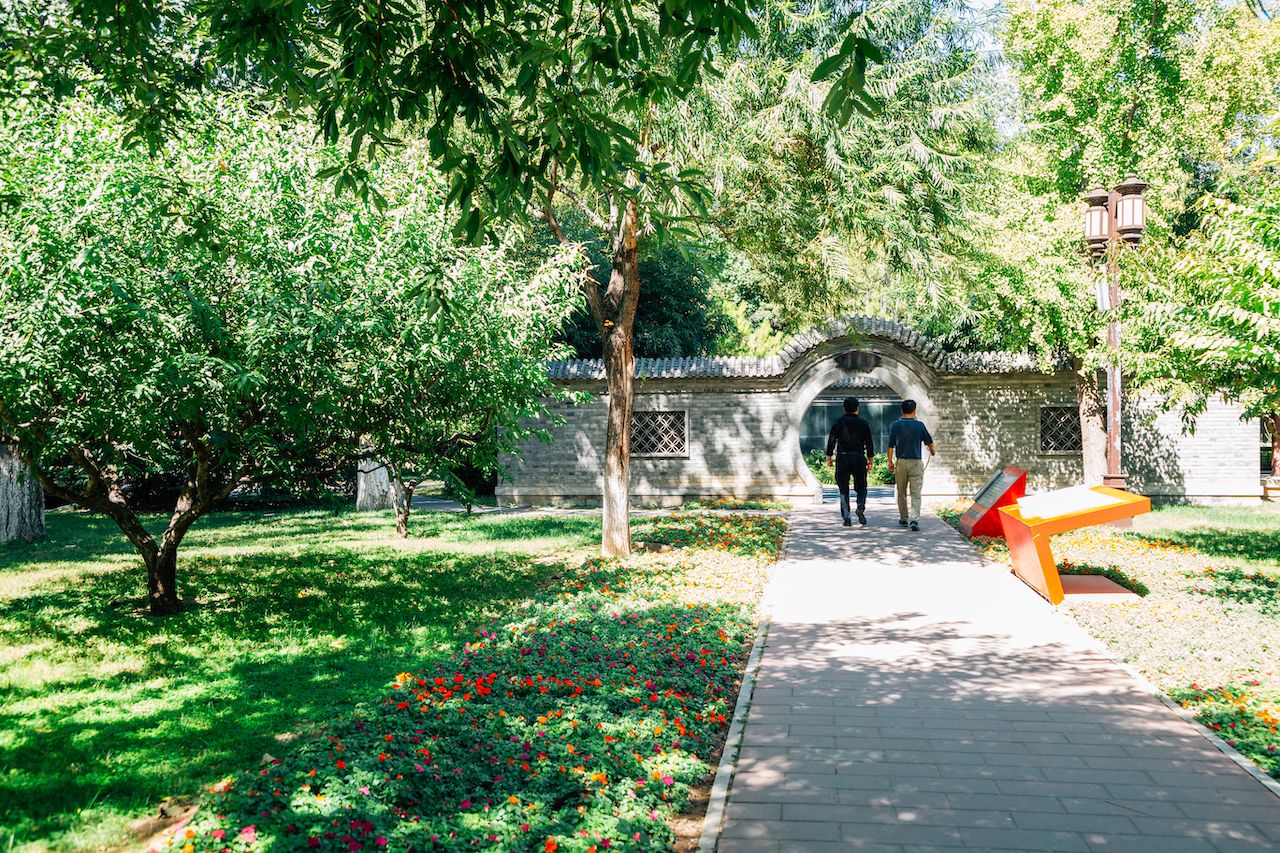 Temple of Earth (Ditan Park) — This temple park is conveniently located just north of the Confucius Temple and Lama Temple. Ditan features spacious walking boulevards and ample greenery of pine and cypress trees, some of which are more than 300 years old. Also, it is only a couple of RMB to get in.

If you walk in far enough, you will actually be able to escape from the overly manicured presentation common to Beijing’s parks. Since most locals stick to the areas with the flagstone paved paths, this section tends to be devoid of other park goers. Admittedly there is no seating, but the environment is nice as it seems a bit more natural. The trees are still planted at regular intervals in a gridwork, and there is dry hay covering the ground. Still, it provides a rare opportunity to connect with nature in a city where man has set a strong precedent. 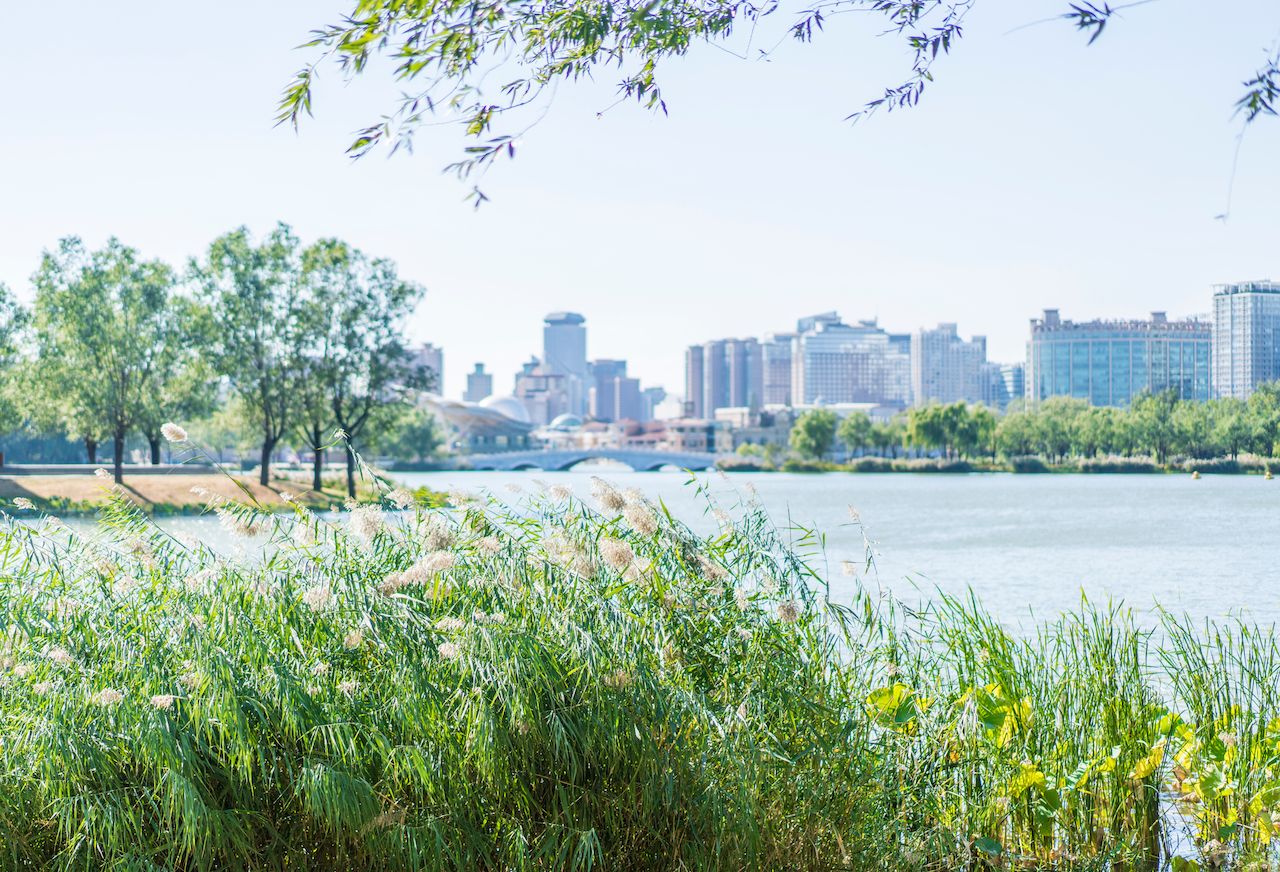 Chaoyang Park — The plot for this, the city’s largest park, was designated as public green space in 1984. That means that, unlike all the other parks on this list, Chaoyang is a modern park and thus will not have any historical relics. But there are abundant green spaces, ample walking and jogging paths, and a pond with paddle boats that can be rented by the hour.

Whereas other parks are more suited to a relaxed stroll, this park is more geared towards fitness. The padded rubber jogging loop traces a long route along man-made ponds and under willow trees; it’s pretty pleasant, although you may have to share the experience with many others. There are also soccer fields, as well as the multi-colored outdoor workout “equipment” that’s seen throughout the Jing’s public spaces. The northern section of the park has fewer paths and thus more wide open green spaces suitable for family picnics. After an afternoon of absorbing the peace and smelling the flowers, head to the Solana shopping center at the north of the park for a meal or some air-conditioned respite. 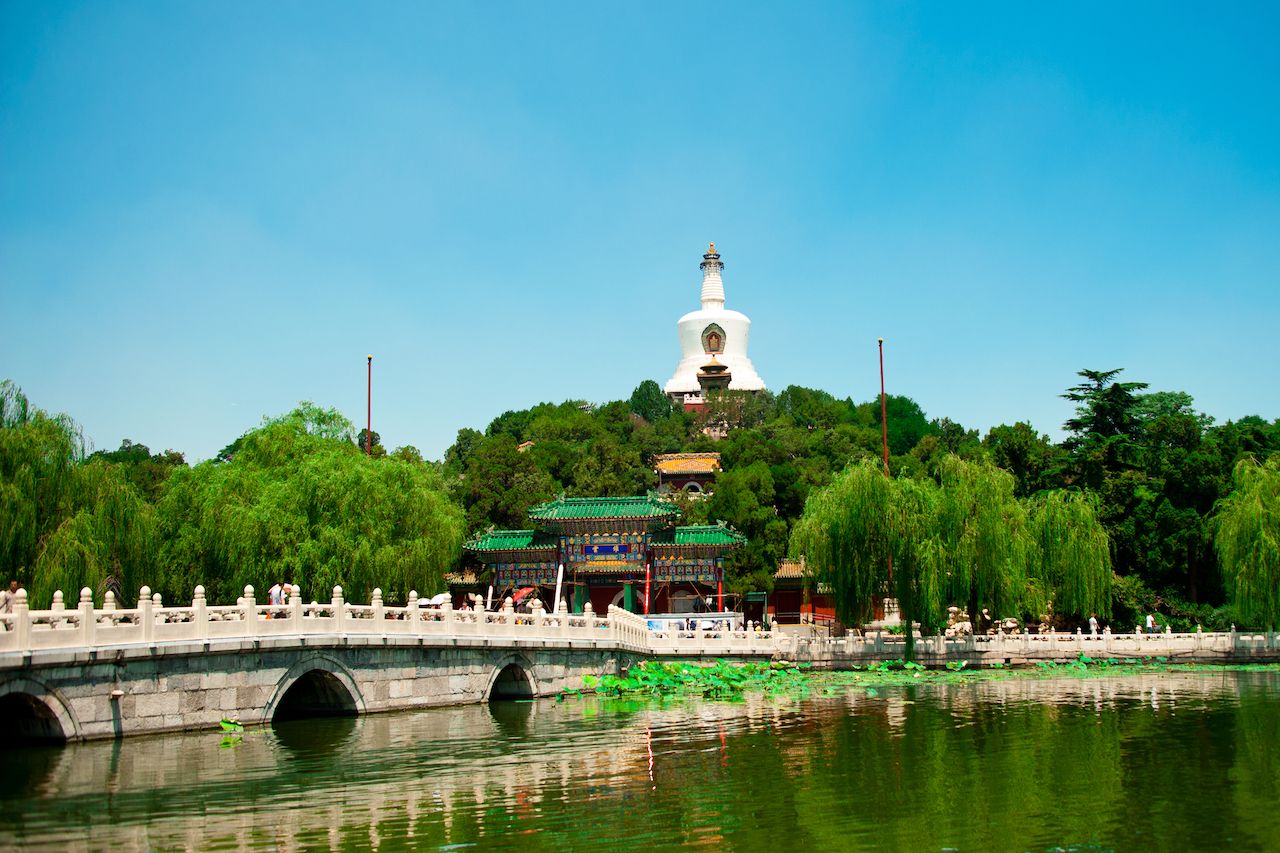 Beihai Park — Beihai translates to “northern sea,” so it may come as no surprise that the park is mostly water, with a large island at the center. Built in the 11th century, when Beijing was first designated as a capital, it was only opened to the public in 1925. As half of the park is water, there are many picturesque marble and stone bridges to traverse. With willow trees dipping their branches into the water, this park is one of the most photogenic. Having a pond means it can also offer a cool respite in the hot summer months, as well as ice skating in the winter.

This park is popular for “water painters,” typically retired men with large calligraphy brushes who use water to paint calligraphy on the cement paths. They don’t mind people watching; it’s like performance art. Then at sundown, given the hilly terrain and lack of wide walking avenues, the park becomes a haven for young couples to discreetly snuggle on obscured benches. Beijing is not a place where one will see a lot of PDA, so it can be sweet to catch a glimpse of furtively affectionate locals.

The park is walking distance from the Forbidden City. Hiking up some steep stone stairways can offer a great view of the former imperial palace, one that may be a bit less crowded than Jingshan Park although it doesn’t offer the same head-on aerial view. You can also get a closer look at the calming White Pagoda, a 130-foot-high Buddhist shrine built on the highest peak of the island. 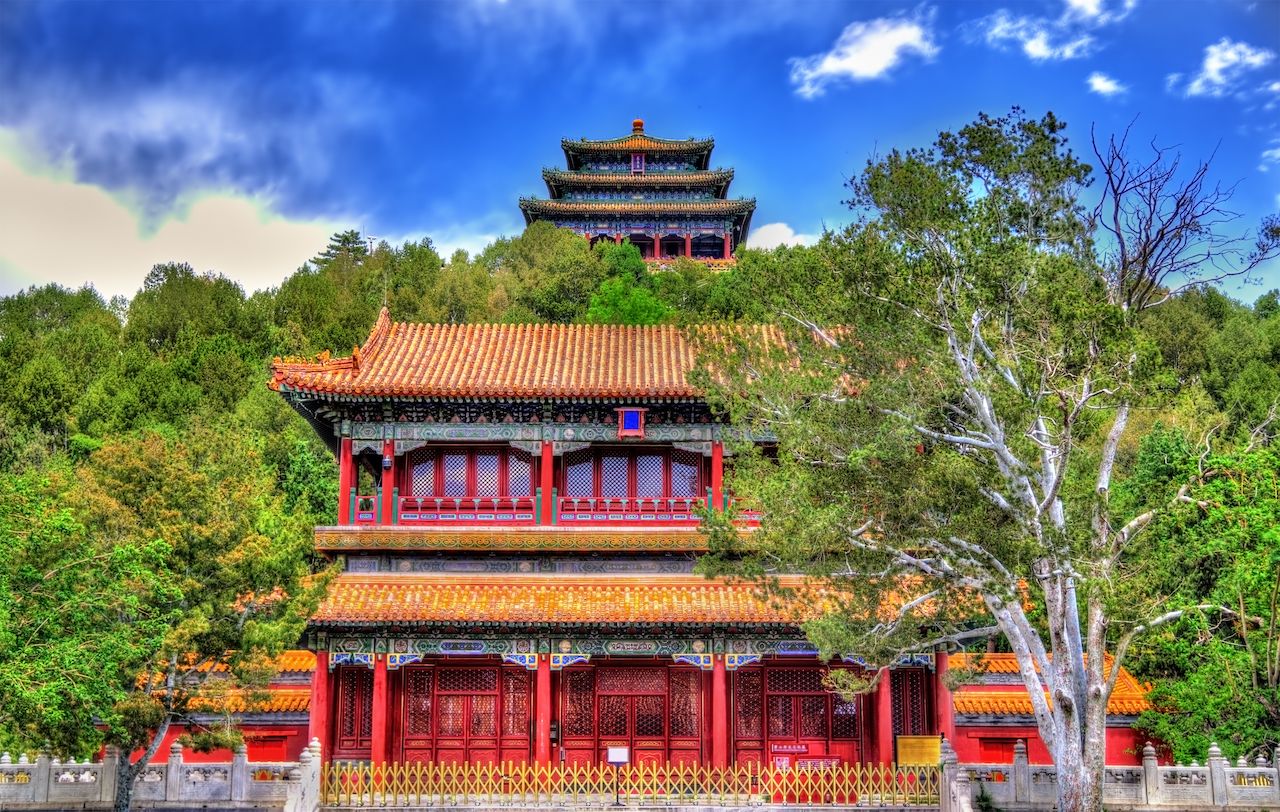 Jingshan Park — This green space is located just across the street from the Forbidden City. The namesake hill (Jingshan) was created from earth excavated to form a moat around the emperor’s palace and designated an imperial park. According to feng shui precepts, harmful yin energy is thought to come bearing from the north, along with cold winter winds. Jingshan Park, strategically placed at the north of the Forbidden City, was thought to serve as an important “energy blockade.” Head to this park on a clear day to enjoy one of the best overlooking views on the city.