Beijing has been distilling liquor since it was designated as a capital in the Yuan dynasty several centuries ago. The drinking culture has stayed strong since, and visitors can find everything from cozy bars to upscale jazz clubs to kitschy karaoke. The drinks are just as diverse, ranging from traditional baijiu to craft beer and world-class cocktails.

Regardless of what your goals for the night are, a nightcap in one of the city’s hutongs is a quintessential Beijing nightlife experience. Hutongs are narrow alleyways in traditionally residential areas where you can find restaurants and places where the locals drink. The alleys have been an integral part of the Beijing landscape for some 800 years. Given their historic nature, hutongs are typically located in the older parts of the city, within the second ring road. In Beijing, you’ll find most hutong bars on the east side of central.

For the best night out, this is where to go in the most popular bar neighborhoods in Beijing. 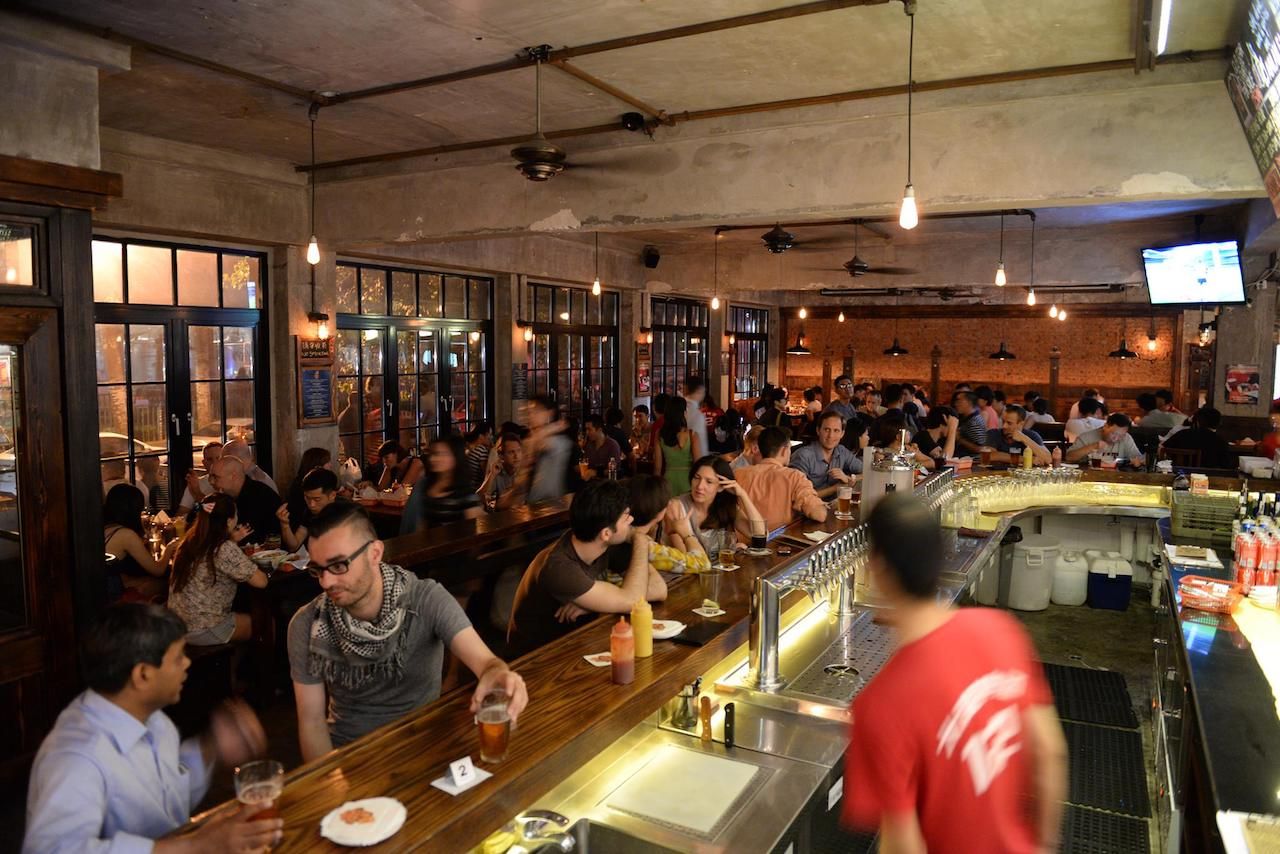 Great Leap Brewing #6 — Great Leap Brewing is a Beijing craft beer institution. The #6 location is where it all started about 10 years ago when the founders launched Beijing’s first microbrewery. GLB specializes in crisp craft brews that incorporate flavors from Chinese cuisine like Sichuan mala peppers, which induce a tingly numb feeling on the pallet, and oolong tea, which adds a floral note. Note that there are three locations throughout the city. The original #6 is in a converted 120-year-old hutong; the other two locations are in contemporary structures. You can choose which location suits your style or location, or check out all three.

Capital Spirits — Baijiu is China’s national drink, and you can get a taste and learn more at Capital Spirits, which has a low-key vibe. Baijiu translates to “white liquor” in Mandarin and is the most-consumed spirit in the world. If you haven’t heard of it, it’s because most of the imbibing occurs in China. There’s a wide variety of baijiu styles, and understanding the basics about the liquor is the first step to understanding Chinese cuisine. Capital Spirits’ bartenders are happy to educate on the beverage as they pour through the initiation, which can include snake-infused variations.

Mao Mao Chong — This perennially popular spot has a cozy, relaxed vibe and a creative cocktail list. Tucked away in a hutong alley in the Drum Tower area, it makes a perfect “sundowner” place for a closing drink after an afternoon exploring the Gulou (“Drum Tower” in Chinese) neighborhood. Enjoying libations in a converted hutong with exposed timber rafters is a quintessential Beijing experience. From the humble exterior it may not appear to be a hip bar, but just look for the MMC letters. The mixologist gets flavor inspiration from local medicinal and fruit markets, emphasizing freshness in MMC’s creative cocktails. 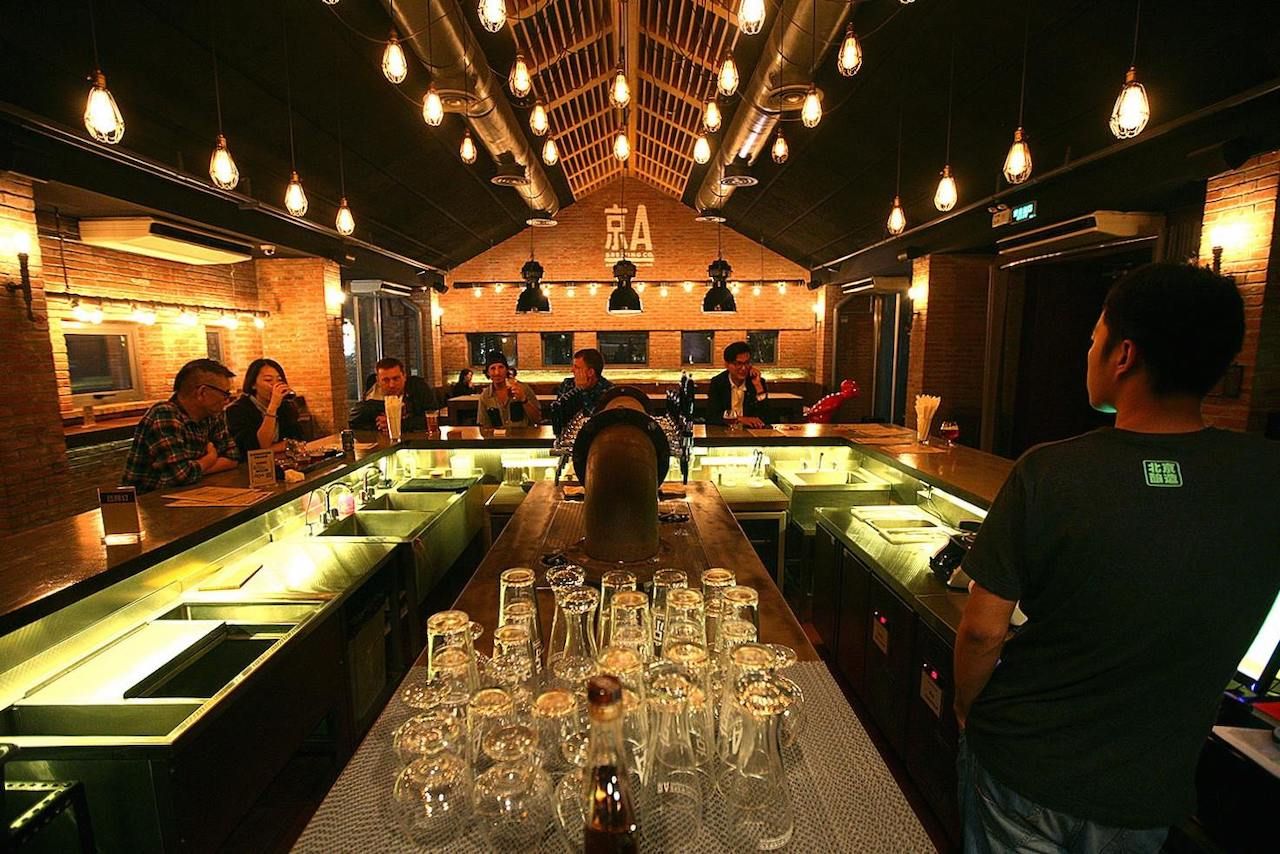 Jing-A Taproom — A relaxed, ground-level craft beer joint with house-brewed beer and Texas-inspired eats. Drinking on the outdoor benches shaded by trees is a summertime treat when Beijing is blazingly hot, and the locally inspired brews are crisp and cool.

Destination — This spacious, multi-level club is a popular spot for the Beijing gay community, and it has some of the best dancing in the city. There’s a large main room where people from all walks can break a sweat, as well as several smaller rooms suitable for relaxed conversation. In a country where one’s public presentation can be stoic, it’s refreshing to see young locals entranced by modern beats in an open, accepting space. 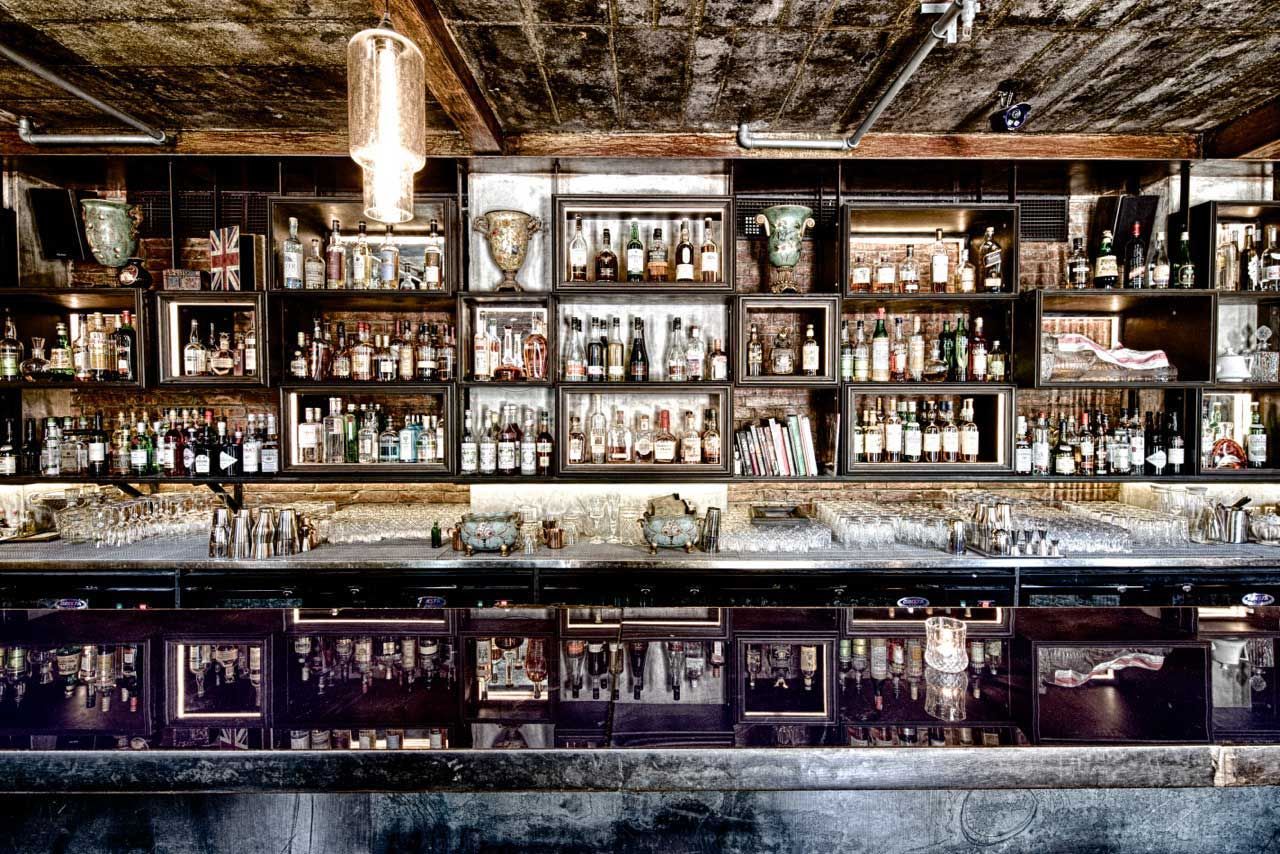 Janes and Hooch — Self-billed as “underground luxury without the pretension,” the interior is soothing and chic with dark wood and softly flickering candlelight. More spacious than the average Beijing offering, the two floors offer enough room for a good-sized gathering. Known for its creative cocktails, it’s a good spot to hit up before or after a meal.

Cinker Pictures — While the bar itself is bite-sized, the atmosphere packs a punch. Cinker Pictures has a luxe 1970s vibe with deep orange geometric tiles, maroon velvet, and minimalist furniture. Come for a drink or multi-course meal and stay for one of the best movie-viewing experiences in the city. The screening room has 20 plush chairs, each with its own small tabletop, so you can imbibe while enjoying the film. Movie options include classics like Taxi Driver and Before Sunset, as well as newer independent films.

Herbal — Try something a bit different at Herbal, which has cocktails infused with Traditional Chinese Medicine (TCM). The bar opened in early 2018 and has a long list of offerings to suit any palate and address various aches and pains. Take, for example, the Floating Jade Immortal Cup, which purports to delay aging and prevent the loss of skin collagen. 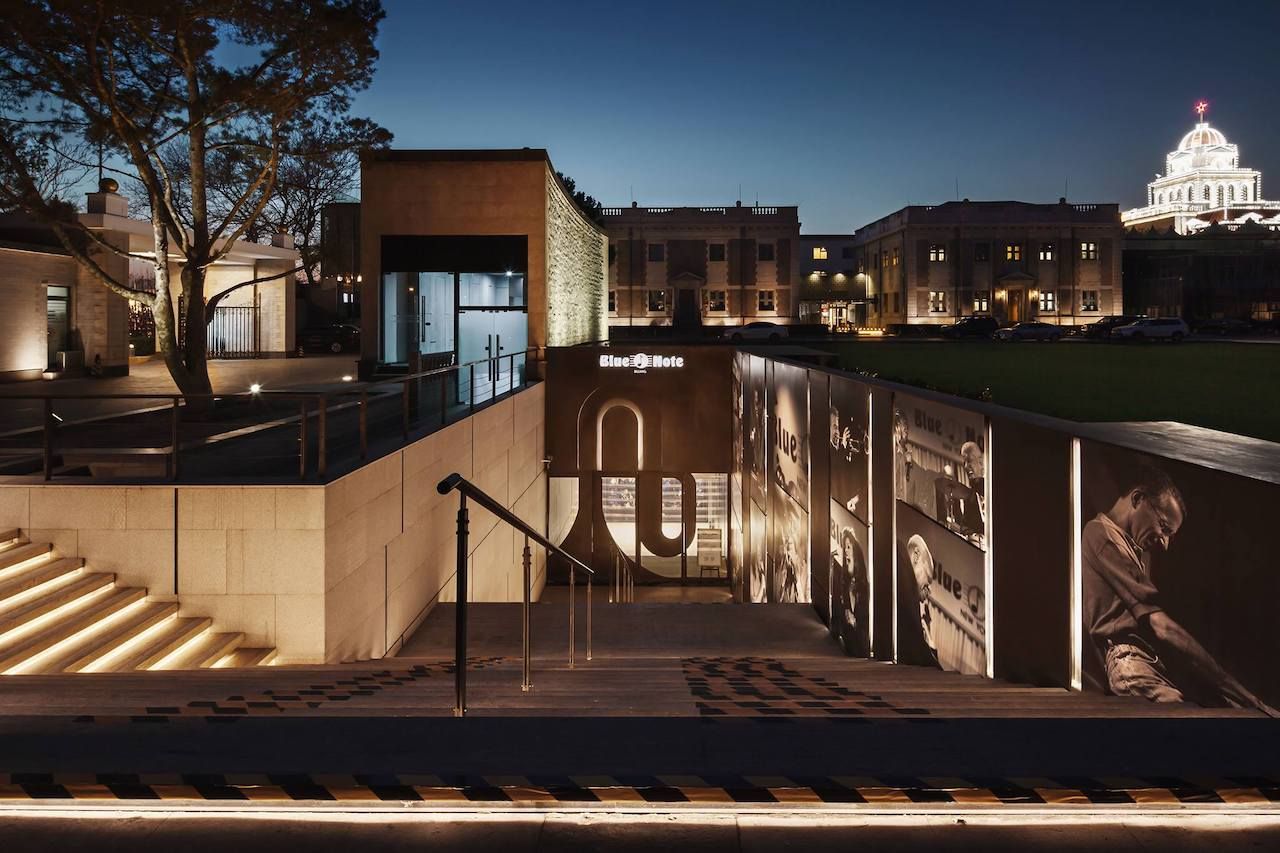 Blue Note — The Beijing branch of the well-known New York jazz club. Here, enjoy a swanky evening of world-class jazz in a refined setting with amazing acoustics. The building itself has history. Built in 1903, it housed the first American embassy in the PRC. For a stint, it also served as home to the Dalai Lama. Gigs are booked and talent acquired by the New York home office. With its extensive network and substantial coffers, visitors can expect top-tier international talent at this Beijing location. Shows play nightly, and tickets start from about $30 USD for bar seating. 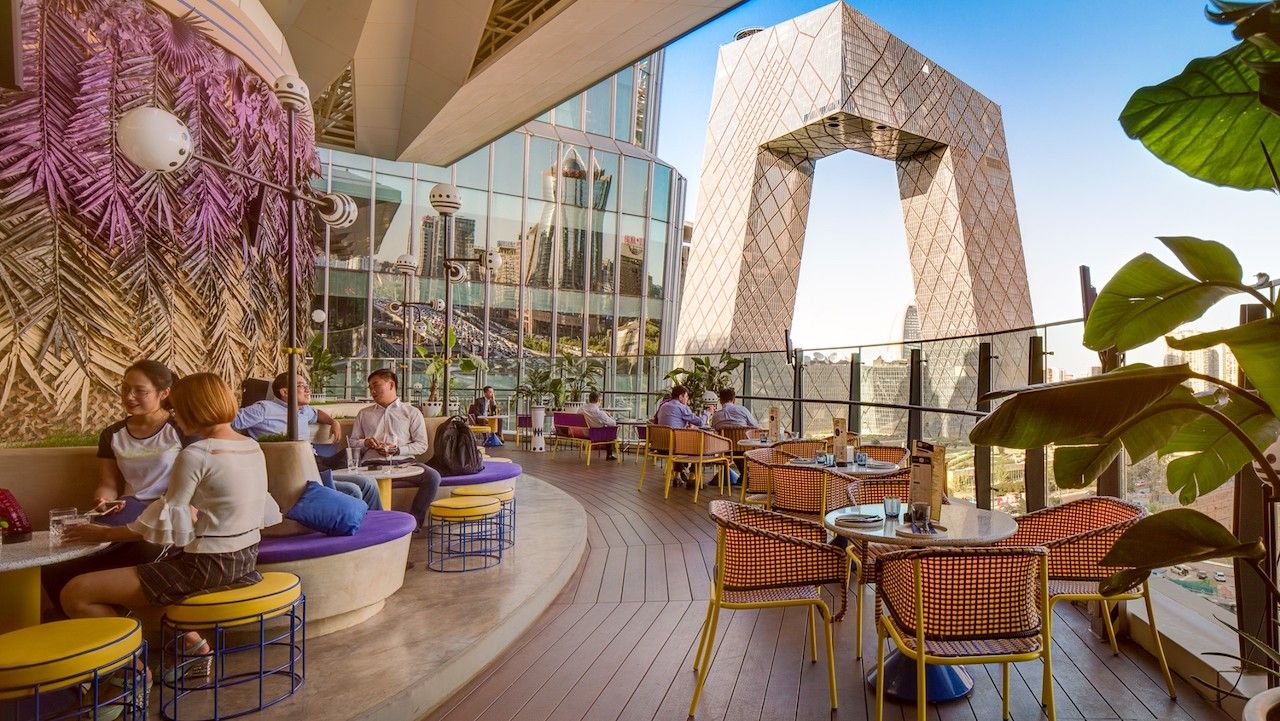 Migas Mercado — This popular spot hosts international DJs who keep the crowd moving. Sip on cocktails and enjoy Barcelona-inspired cuisine. The spacious and stylish rooftop terrace offers an incredible view of the iconic CCTV tower (affectionately known as the “split pants” building because of its shape). Although the bill can run high, it offers one of the most luxurious evenings out on the town.

Mei — Located in the stately Rosewood Hotel, Mei is a quintessentially cool, dimly lit luxury hotel bar that also has great views of the CCTV tower. A sleek, well-heeled crowd gathers here on weekends to kick back and enjoy a wide selection of whiskeys, wines, and cocktails. Dress code is business casual, but loosen up on Thursdays with live music complemented by weekly drink specials and a long list of cocktails with Asian-inspired twists. 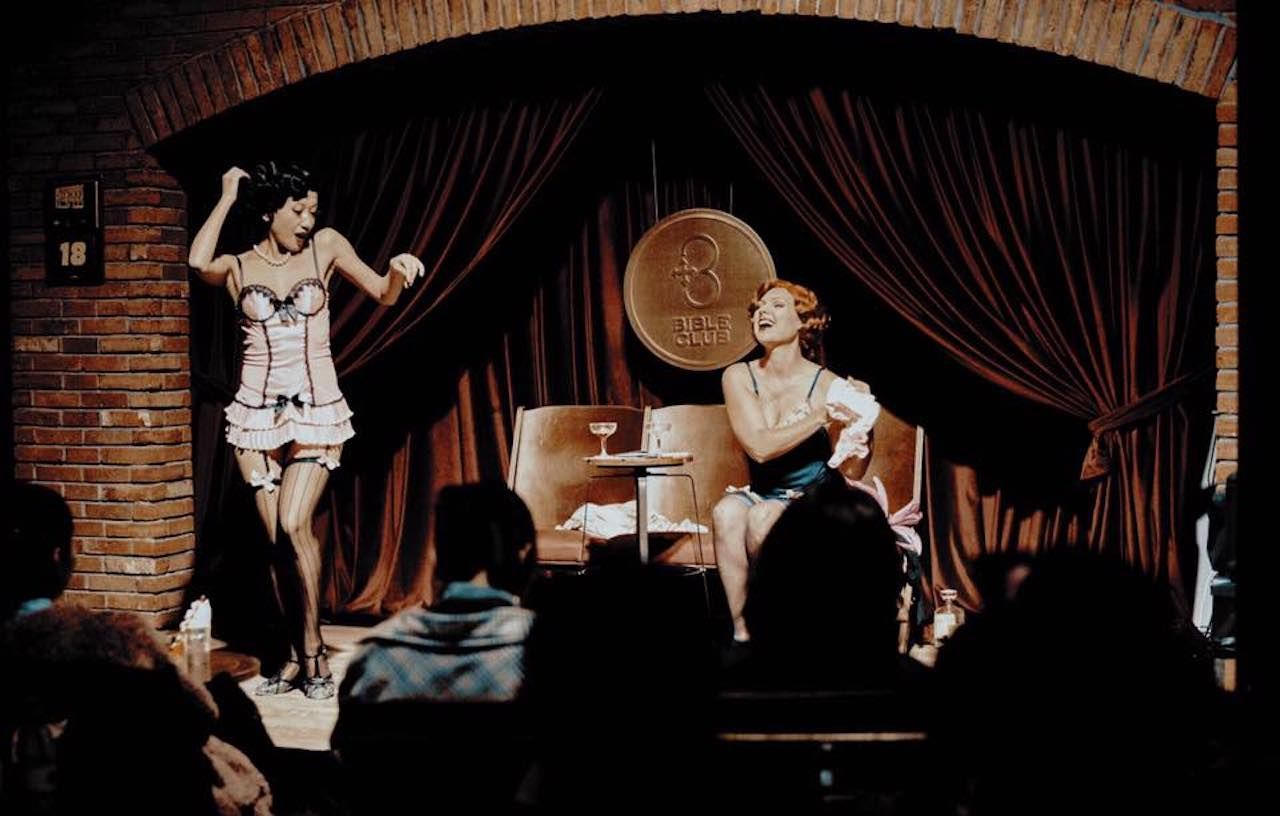 Moonglow Burlesque — Started by a Russian dancer living in Beijing in 2010, Moonglow was initially a series of informal get-togethers. It’s since matured into a professional performance group that does national tours. There are regular Beijing shows hosted at a range of swanky on-theme venues (check the website for current show info). Performers hail from all over the world, and all speak English and occasionally provide dance classes.

Karaoke — One of the most authentic local night-out experiences. Karaoke in Asia is a totally different animal than it is in the West. Here, many of the karaoke venues are opulent, professional affairs with service-oriented staff. Check into a plush themed room, order the fresh fruit plate and some bubbly, then get ready to sing your heart out for the next hour or three. There are plenty of choices throughout the city. A couple popular options include Ibiza in Sanlitun (try to get the Hello Kitty-themed room) and Melody, a chain with multiple locations.