Although renowned for its fairytale European architecture, Prague is also a surprisingly green city. Beyond excellent public parks such as Letná and Havlíčkovy Sady, the city is also dotted with numerous public gardens, many of them historic — like the Franciscan Garden in the New Town, which dates back to the 14th century, as well as the unique Petřín Hill, which has a famous 19th-century tower, rose gardens, and a mirror maze. These parks will give you a view into city life, as locals come here to exercise, let the kids play, or just relax. And since many of them are atop a hill, they also offer a fantastic view of the city itself. 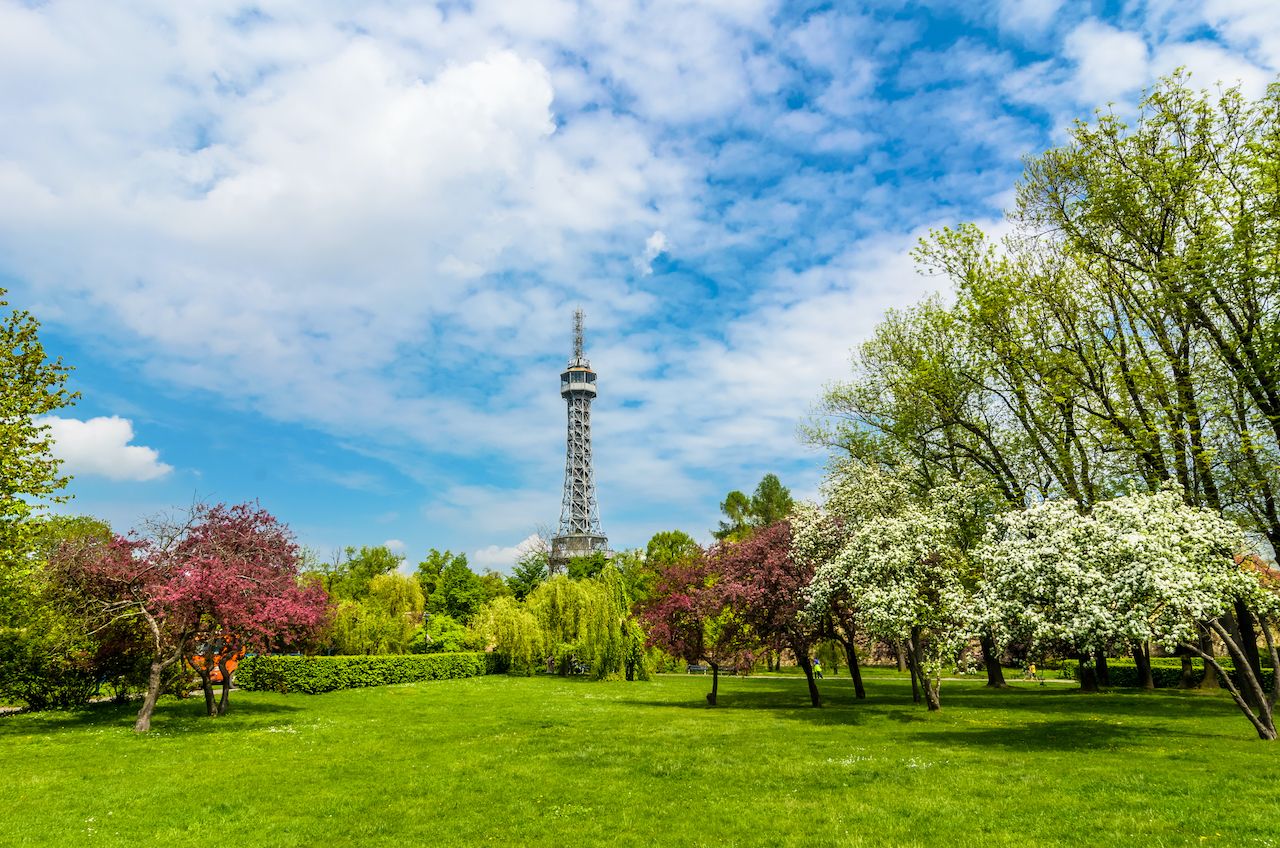 Petřín Hill — Petřín hill is the most famous green space in Prague. Located right in the city center, sandwiched between the Malá Strana and Strahov districts, it started life as a royal vineyard. Not only are the views from the top stunning, but there are also several notable attractions strewn around for adults and children alike. These include the city’s famous tower, which was built in 1891 for the Jubilee Exhibition and modeled on the Eiffel Tower. You can climb its 299 steps for tip-top vistas. There is also a mirror maze; an observatory with a telescope and corresponding museum; and a landscaped rose garden, plus a decent-sized children’s playground, several cafes and restaurants, and even pony and horseback rides during summer. You can reach the top along various winding pathways, but if the steep climb doesn’t appeal, take the charming Victorian-era funicular, which runs every 10 to 15 minutes. 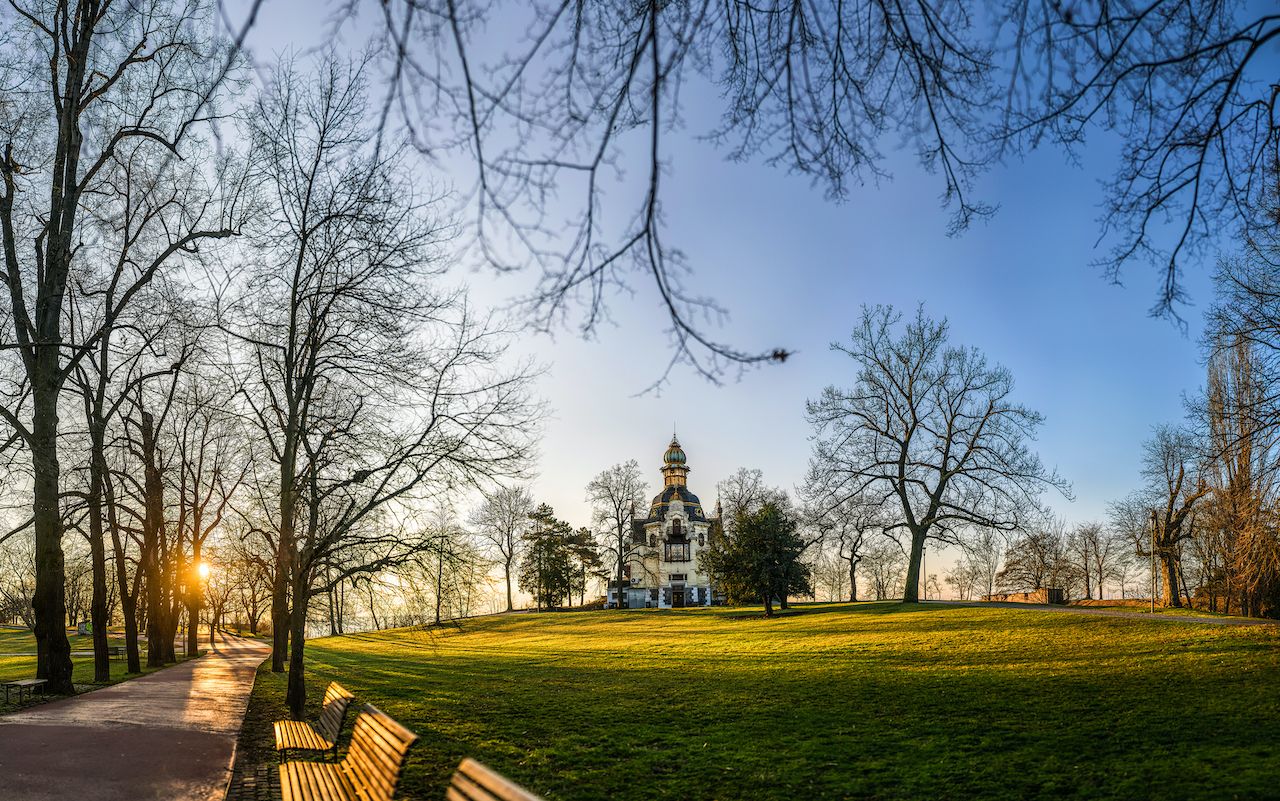 Letná Park — Located to the east of Prague Castle and Malá Strana, Letná Park is located atop an embankment that rises up steeply from the northern banks of the Vltava. Although quite central, its height above the city lends the park a wonderful sense of peace and quiet that feels far from the bustle of the city below. It’s a firm favorite with locals, but often overlooked by visitors who are missing out, since its height also offers some of the finest views of the city, spanning the snaking river and several of its bridges. Spacious grassy areas are perfect for picnics and lounging, while asphalt paths are used for jogging and in-line skating, and the dedicated skateboard park is heralded by a giant pendulum that was built on the site of a former statue of Stalin . Don’t visit without a stop-off at the park’s beer garden, which has decent food and beers and lots of shady chestnut trees, or the Hanavský Pavilion, which is a picturesque cast-iron building that houses a restaurant and is set near one of the park’s best viewing spots. 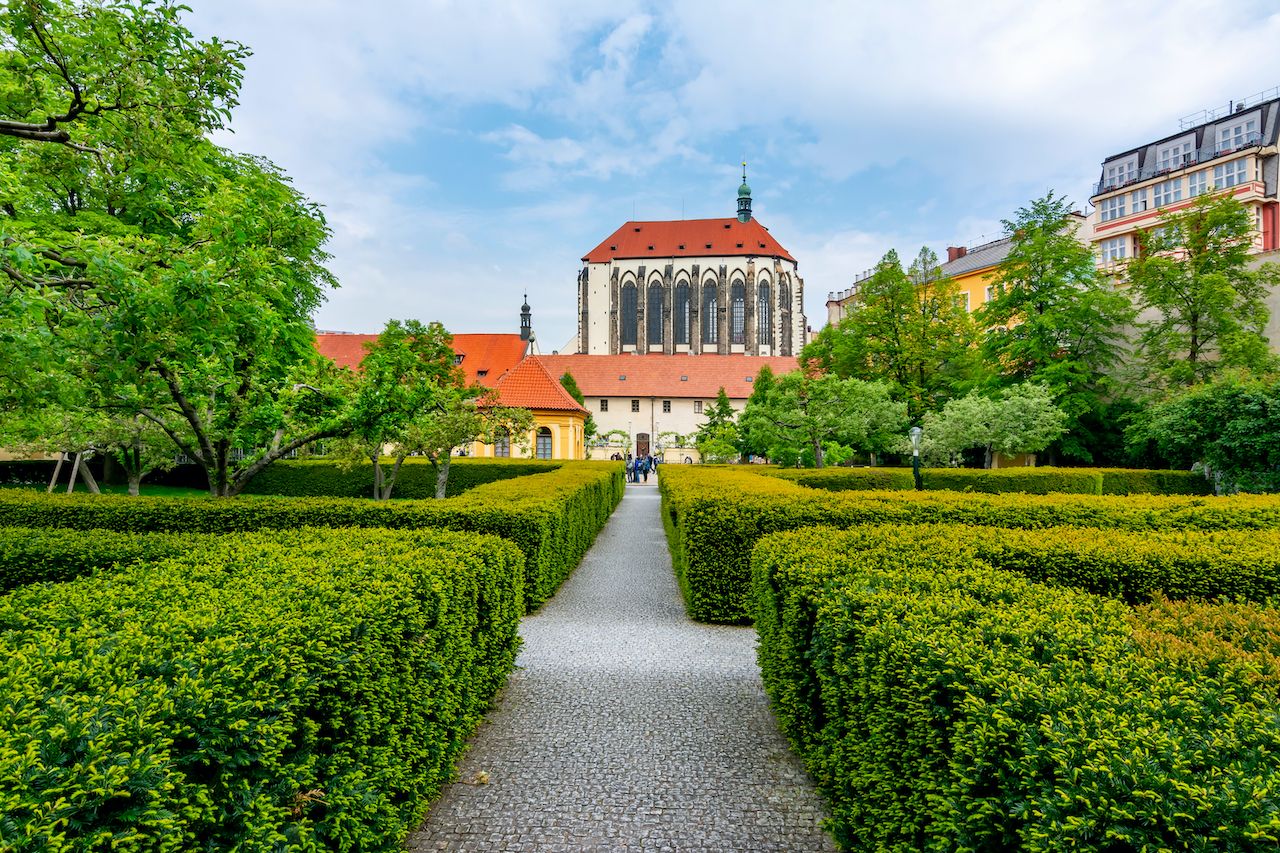 Franciscan Garden (Františkánská zahrada) — Tucked away between Jungmannovo Square and Wenceslas Square in New Town, the Franciscan Garden can be found next to the Church of Virgin Mary of the Snows. Though small, it provides a very pleasant oasis of calm in the middle of the hustle and bustle. Dating back to the 14th century, when the New Town was constructed, the garden was overhauled in the 1990s. It now has benches, sculptures, and fountains, immaculate lawns and manicured hedges, and a variety of trees plus flower and herb gardens. Little wonder that many locals like to pick up an ice cream or a takeaway lunch and come here to enjoy the peaceful scenery. A small playground makes it popular with the occasional family, too. 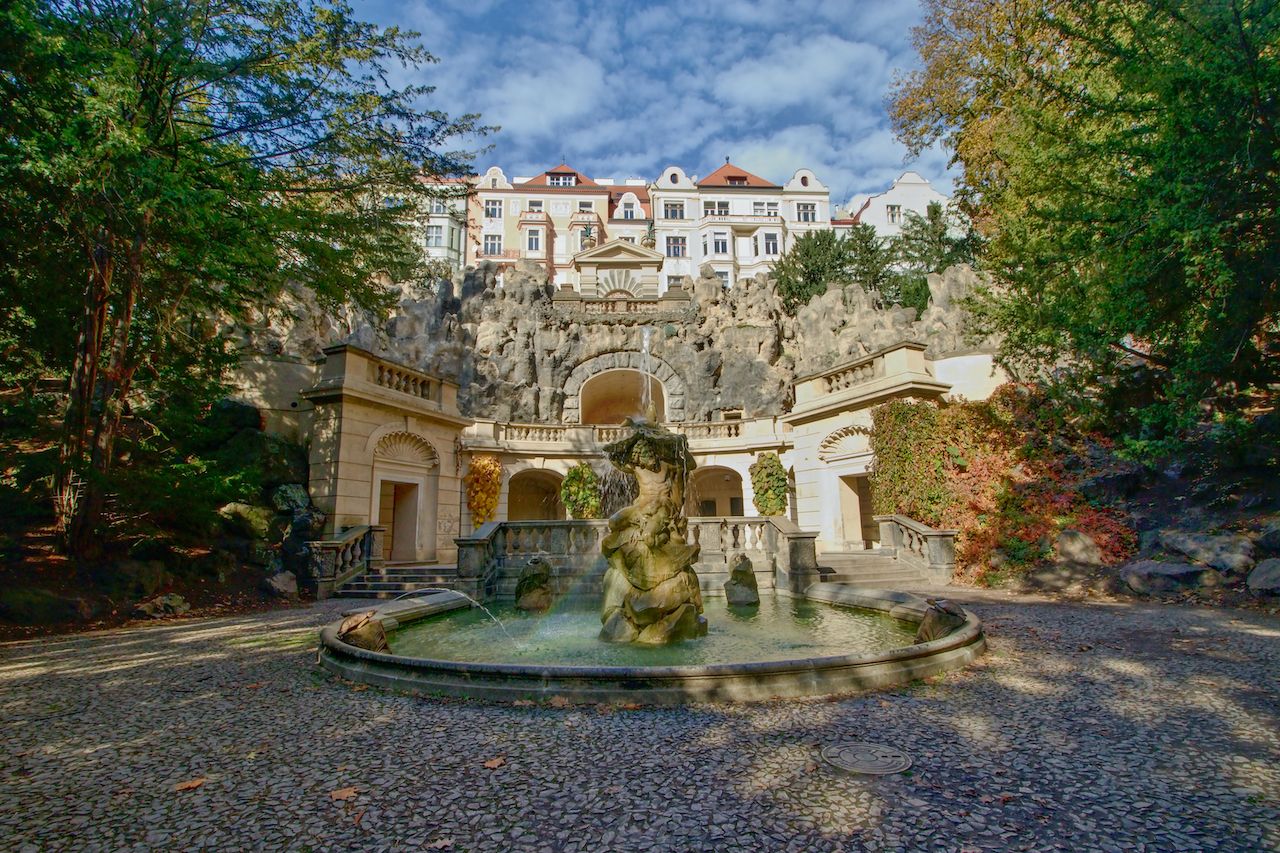 Havlíčkovy Sady (Grébovka) — One of Prague’s largest parks can be found at the border between the Vinohrady and Vršovice neighborhoods. Inspired by Italian Renaissance landscape designs, its vast size and many pathways and playgrounds make it popular with joggers, walkers, families, and dog walkers alike. Its nickname, Grébovka, comes from its most notable landmark, the Neo Renaissance Villa Gröbe, or Grébovka, which had been built as a summer house for industrialist Moritz Gröbe in the 19th century. The villa isn’t open to the public but the grounds are, and feature a lovely terraced garden, functioning vineyard with a gazebo and a café-restaurant, Pavilon Grébovka, both with sweeping views of the city. The park is also dotted with fountains, statues and small water features, and hosts events like an annual Wine Festival and a summer Family Day. 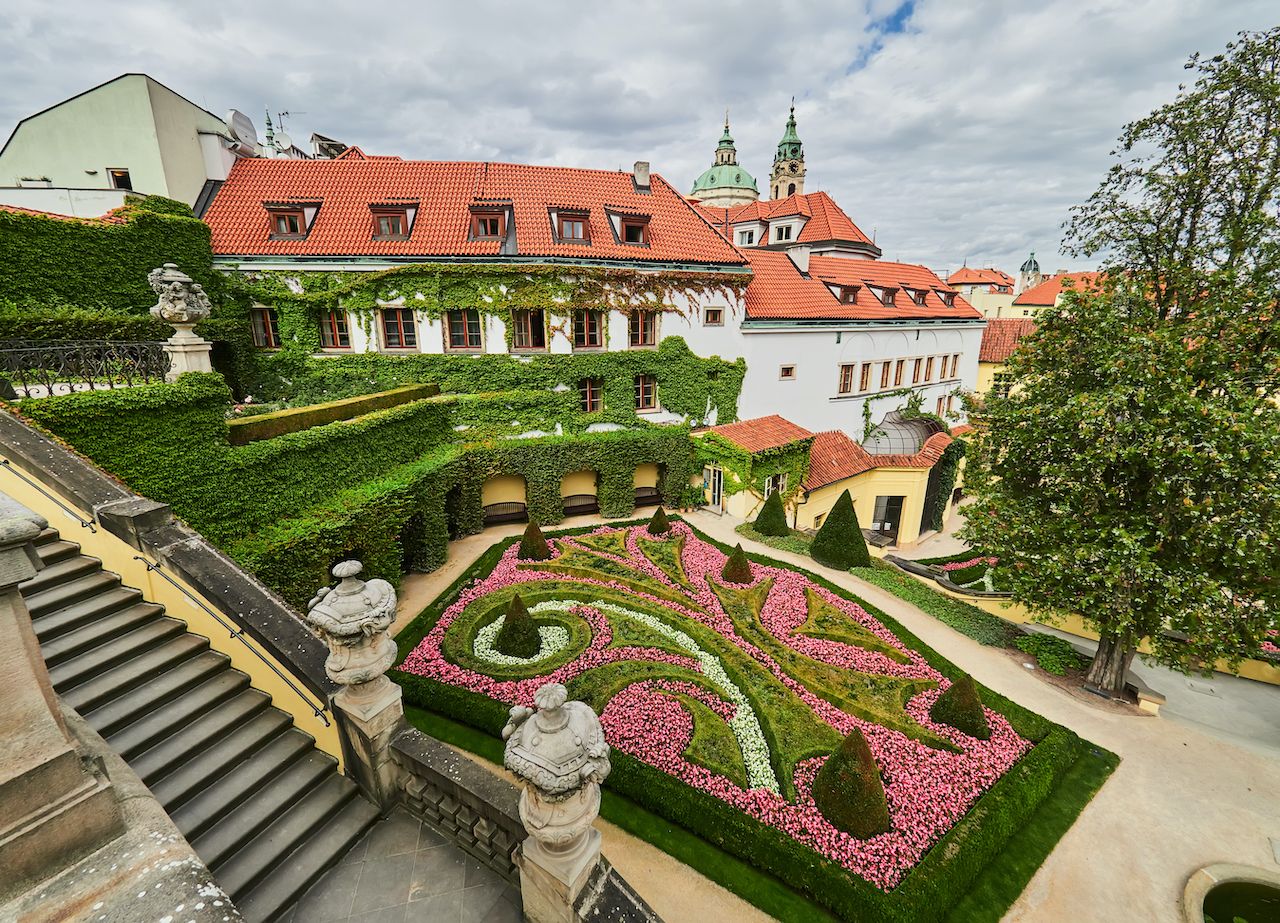 Vrtba Garden (Vrtbovská zahrada) — The Vrtba garden dates back to the beginning of the 18th century and was fully restored in the 1990s along with three other of the city’s Baroque gardens — Vratislav, Schönborn, and Lobkowicz, to be precise. Despite its size, Vrtba is one of the finest. Forming part of the Vrtbovský Palace, its sloping terraces that were once a vineyard and its gardens are beautifully manicured and set amid splendorous staircases decorated with statues of ancient gods and goddesses. The garden also has ornamental vases and fountains and, from the top of the slope, a lovely view over Malá Strana’s rooftops. 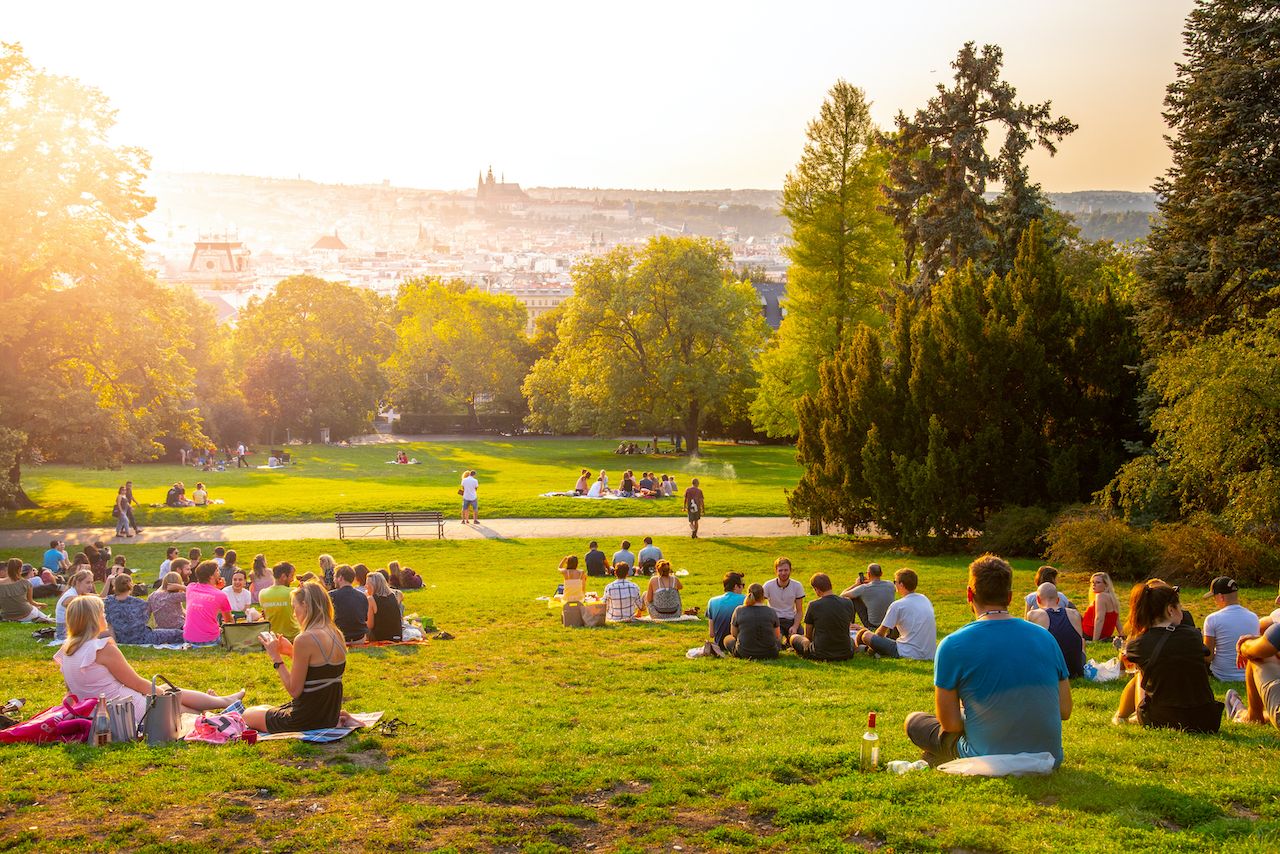 Riegrovy Sady — Situated on the northern perimeter of Vinohrady at the border of Žižkov, this sprawling but pleasant English-style public garden — like so many others, also a former vineyard — is named after 19th-century Czech politician František Ladislav Rieger, a statue of whom can be found here. It’s large enough to have a sports stadium and pool at the top of the main hill, as well as plenty of hilly pathways to wander, plus interesting remains of some of the original buildings. In addition to walking around and admiring the diversity of trees and flower gardens, you can enjoy a beer at the park’s outdoor pub, which also has an adjoining playground and views right across to Prague Castle. On summer afternoons, it’s a popular spot to take in the sunset. 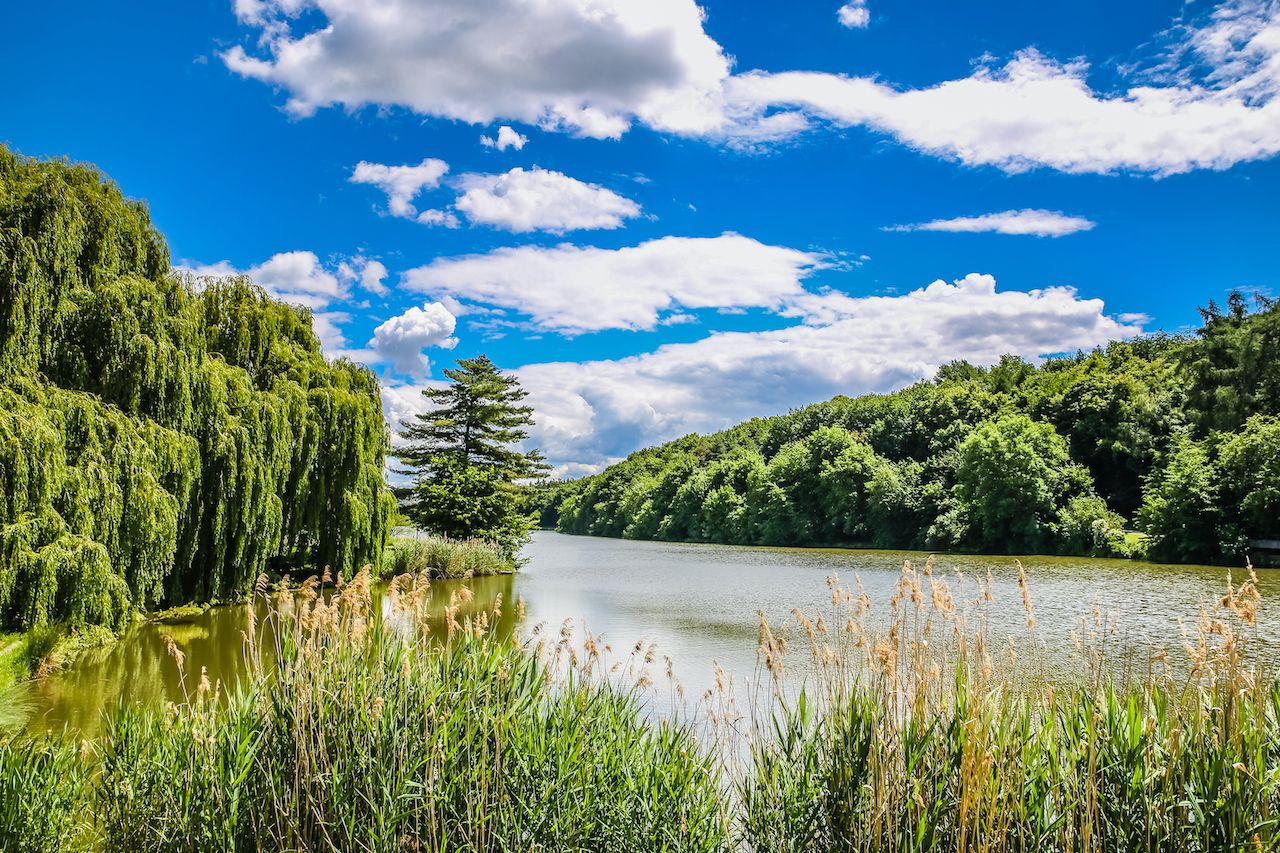 Divoká Šárka — Although this peaceful and pleasant nature reserve is located in Prague — around thirty minutes northwest from Wenceslas Square to be precise — it feels a world away. It has several well-marked trails that take visitors through undulating and scenic terrain of rocky cliffs, creeks, small waterfalls and forests. It’s also popular with rollerbladers and cyclists, joggers and swimmers. Look out for the natural spring that feeds a natural swimming pool nicknamed “Dzban” (The Jug). Also, be sure to not miss the beer garden, where you can enjoy a frothy beer and grilled sausage, should the mood take you.