Central Prague is divided into 10 clear districts, which are numbered but generally referred to by their neighborhood names. Although the medieval center — Staré Město, Malá Strana, and the castle district Hradčany — was formed between the 10th and 14th centuries, the main bulk of the city began to develop in earnest in the late 19th century to create Greater Prague. While the older central areas still get most of the heat — and the tourists — the city has many other varied and interesting districts to explore. These range from the commercially and culturally busy New Town to the mellow, residential neighborhoods of Vinohrady and Žižkov, to up-and-coming art-hipster hub Holešovice. 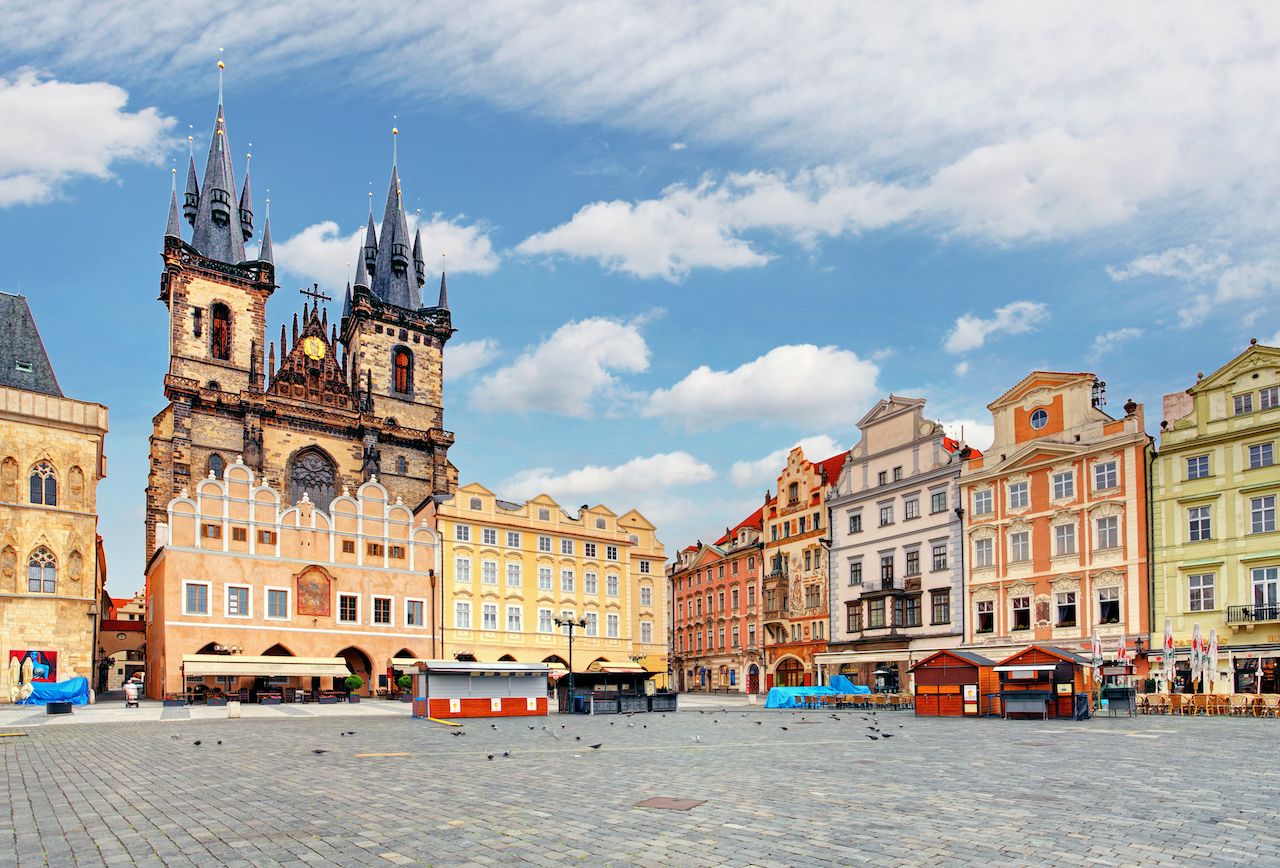 Old Town (Staré Město) — Prague’s Old Town is by far the liveliest and most tourist-heavy district in Prague. Its medieval layout is aesthetically packed with pleasant squares, winding cobbled lanes, and a wealth of baroque and renaissance buildings that house restaurants, shops, cafes, and bars. Its central hub, and a definitive city highlight, is Old Town Square, one of the finest squares in Europe, and home to sights like the Church of Our Lady before Týn, the Astronomical Clock, and Old Town Hall, which offers great views from its tower. Elsewhere in the Old Town is the 18th-century Clementinum, the historic Powder Tower, and the Jewish Quarter. 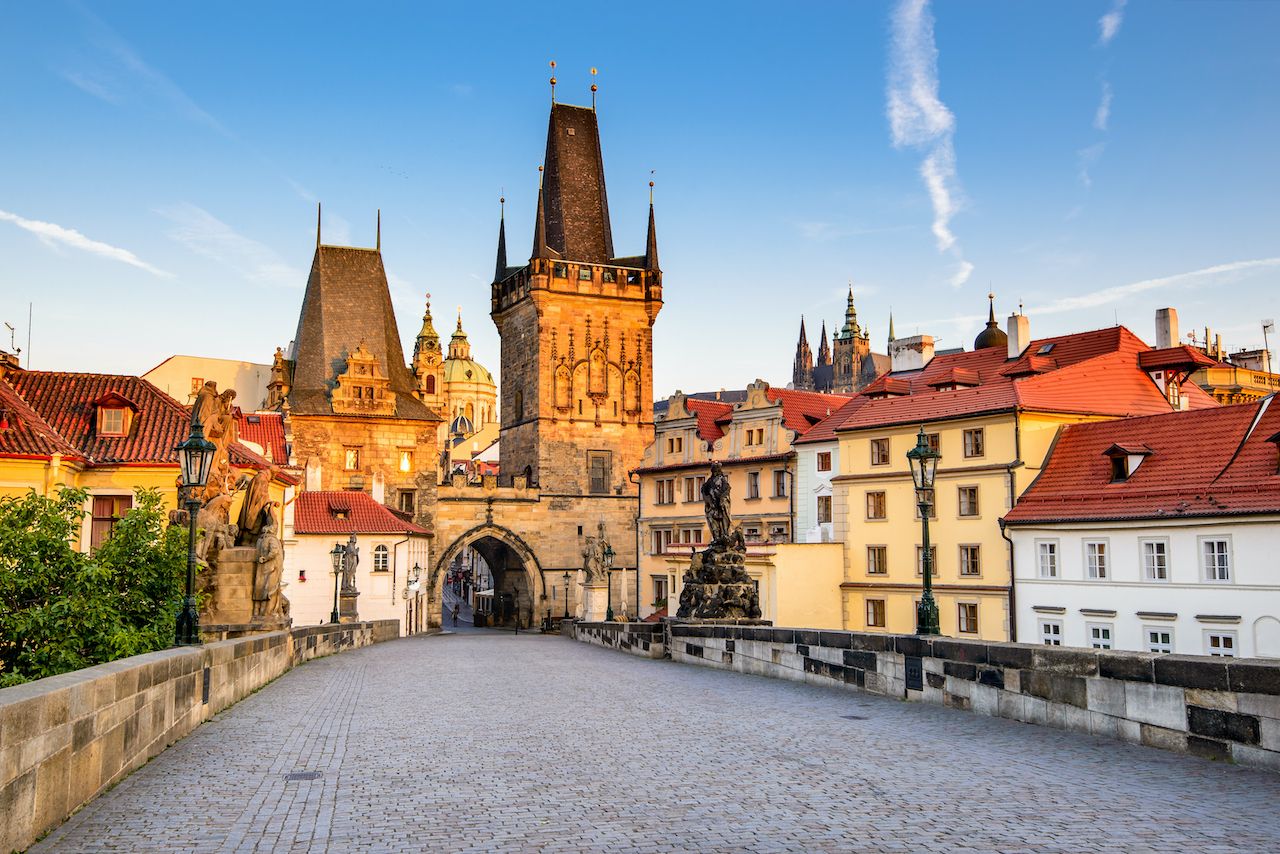 Lesser Town (Malá Strana) — Translated as ‘Little Quarter’, Malá Strana started life as an eighth-century settlement on the other side of the Vltava river to Staré Město. Reached via the famous 14th-century Charles Bridge, it’s best known for the city’s historic castle, which looms magnificently over the district from the top of the hill. While the streets that wind their way up to the castle are usually busy thanks to being lined with gift shops and boutiques, cafes, pubs and restaurants (especially the historic Nerudova Street), other parts of Malá Strana are more laid-back and tranquil — almost village-like. There’s plenty to see aside from the castle too, from the striking 18th-century St Nicholas Church (which has a stunning interior as well as picturesque exterior), the fascinating Franz Kafka Museum, and the peaceful Kampa Island, which runs directly underneath Charles Bridge. Check out also the unique John Lennon Wall, which sprang up after the singer’s murder. 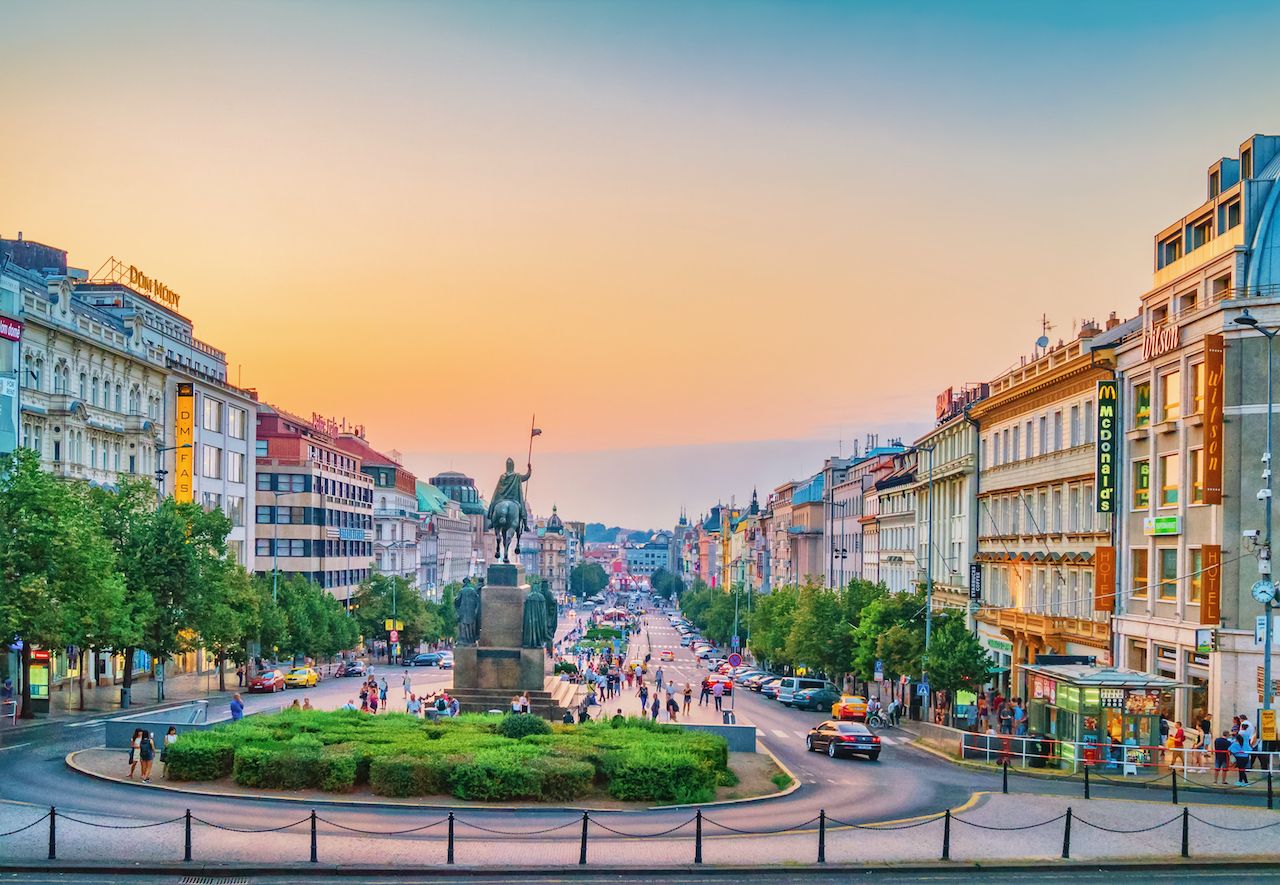 New Town (Nové Město) — Despite its name, Prague’s New Town isn’t really all that new. Established and designed by Charles IV in 1348, it was so-named to distinguish it from the older Staré Město, which it partly surrounds. While it lacks the medieval charm of the Old Town, it does have some scenic areas, but is mostly known for its busy commercial infrastructure — especially around bustling, modern Wenceslas Square, the former site of the Velvet Revolution in 1989 and today a beguiling mix of Art Nouveau buildings and malls. You can find some serious cultural institutions here, such as the National Museum, State Opera, and the National Theatre, as well as smaller highlights like the Museum of Communism and the Mucha Museum. 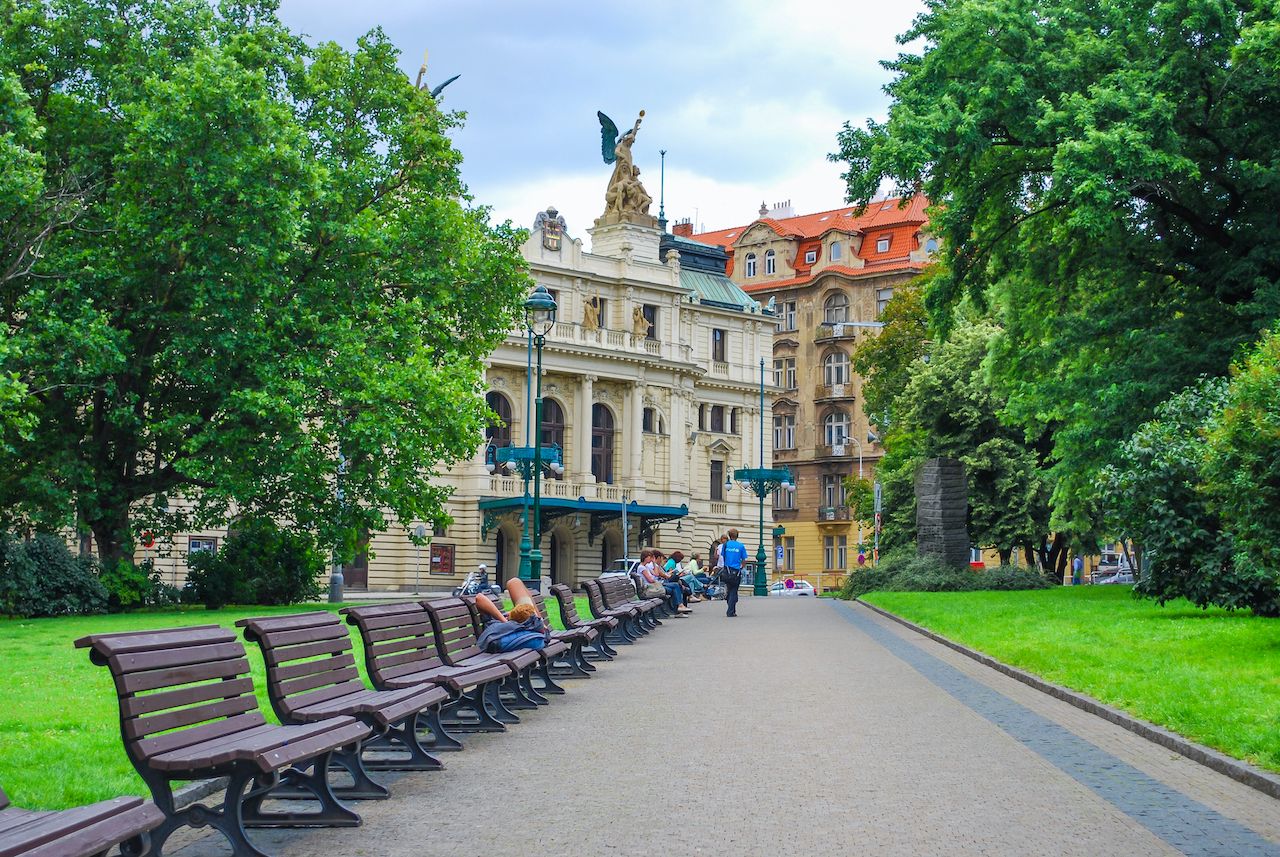 Vinohrady — Vinohrady (vee-no-raa-dee) takes its name from the fact that its gentle slopes were once used for vineyards. During the late 19th and early 20th century it began to develop into a residential district, becoming officially a part of the city in 1922. Today its rows of turn-of-the-century tenement buildings are popular with middle class families drawn to the area’s quiet atmosphere, the tree-lined streets, and lovely parks like Riegrovy sady. It’s more a place for strolling, soaking up the ambience, and discovering some great local restaurants and bars than hitting big sights, but take the time to look for the constructivist Husuv Sbor church, completed in 1932 and designed by Pavel Janák, and Peace Square, home to St. Ludmila Church and the splendid Art Deco Vinohrady Theatre. There’s also a reasonably lively nightlife scene at weekends. 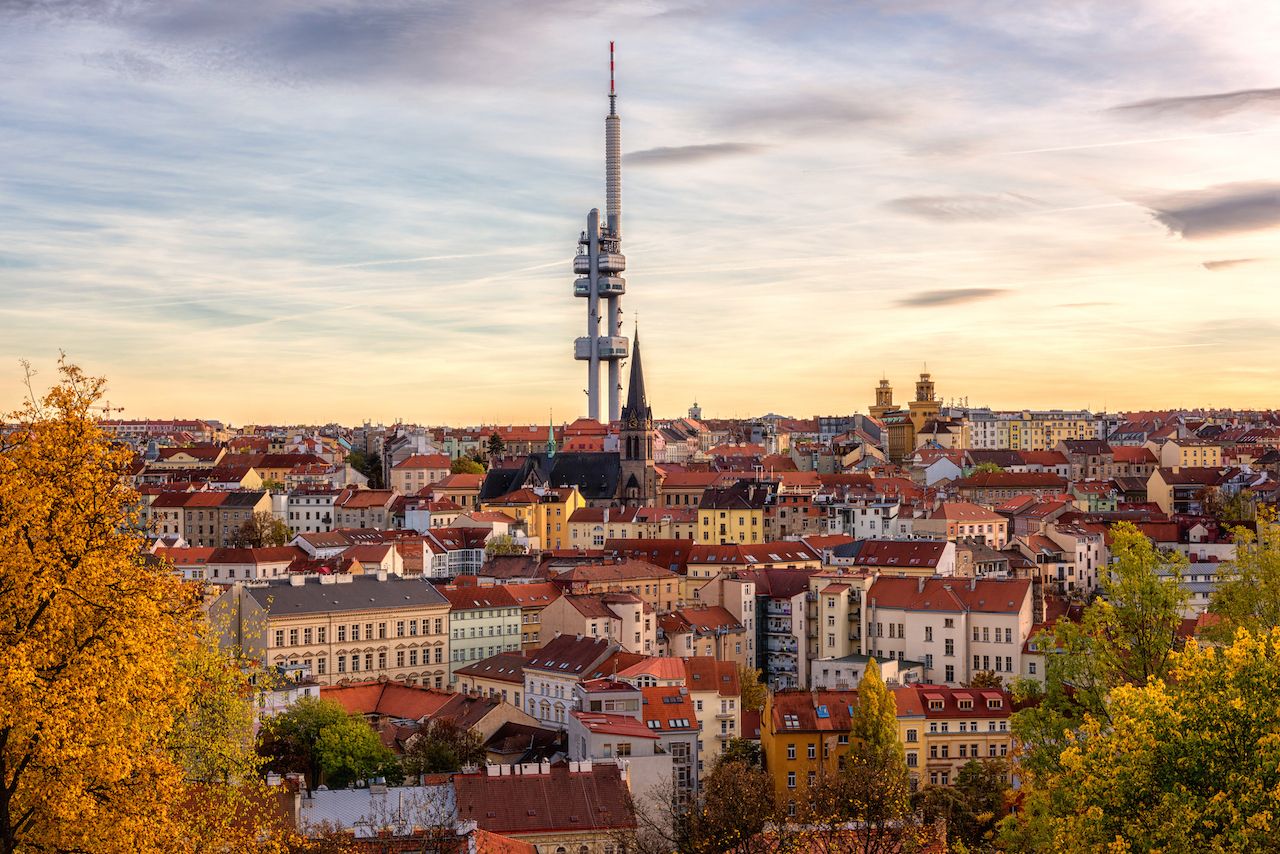 Žižkov — This traditionally working class district (pronounced “zhizh-kov”) doesn’t have many sights and subsequently isn’t usually bothered by tourists; but it does have a wonderfully local character and a slew of cafes, pubs, and restaurants to explore, many of them cheaper than the trendier areas. While its architecture doesn’t come close to that of the more central areas, there are a few spots worth seeing. The quirky 708-feet-tall Žižkov TV Tower, for example, which was decorated in 2000 by David Černý’s faceless babies, who appear to be climbing up the tower’s column. Nowadays the tower contains an observation deck and restaurant, a mini golf course and a one-room hotel. Look out for the modernist Church of the Most Sacred Heart of our Lord and Parukarka Park, which has a decent beer garden and great views over Old Town and Prague Castle. 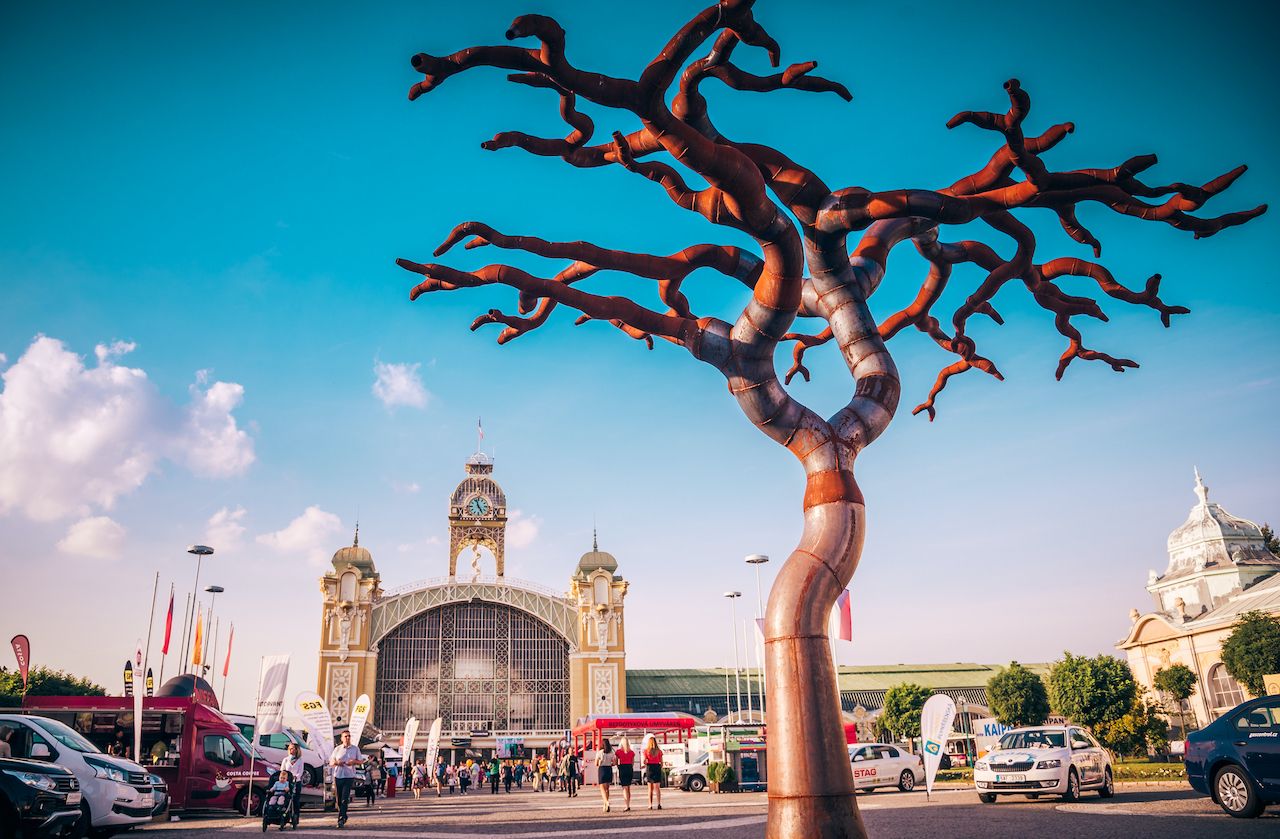 Holešovice — Once an industrial manufacturing center, Holešovice is now a burgeoning art and culture hub. Its Soviet-era buildings and factory complexes have been repurposed into hotels, art galleries, and food halls, and there are trendy fashion boutiques and cool cafes, bars, and restaurants dotted all over. Among the 19th-century residential buildings and old slaughterhouses and market halls are some cool sights like the Prague Exhibition Grounds, home to the Art Nouveau Industrial Palace; the Trade Fair Palace, which is part of the National Gallery; the DOX Centre for Contemporary Art; and the National Technical Museum. Strossmayerovo Namesti, the main square, is home to the St. Anthony of Padua Church (1908-1911) and nearby Letna Park, one of the city’s finest with splendid views, plenty of greenery and walkways, and a skate park.