Czechs drink more beer annually than anyone else in the world, and the country’s residents are justifiably proud of its brewing heritage. There’s a wide range of cozy and convivial pubs in Prague. These are often tucked away in cellars, and are places where you can enjoy a glass of local pivo (beer) — usually along with some hearty Czech food. These days, there’s also an increasing number of trendy craft beer bars and microbreweries to try out, as well as upscale wine and cocktail bars that reflect the city’s swankier side. The latter encompass everything from hip hop party nights and techno events, to international and local live acts at well-established venues like the Roxy and Cross Club.

Depending on where you’re centered, these are the best bars to check out no matter what mood you’re in. 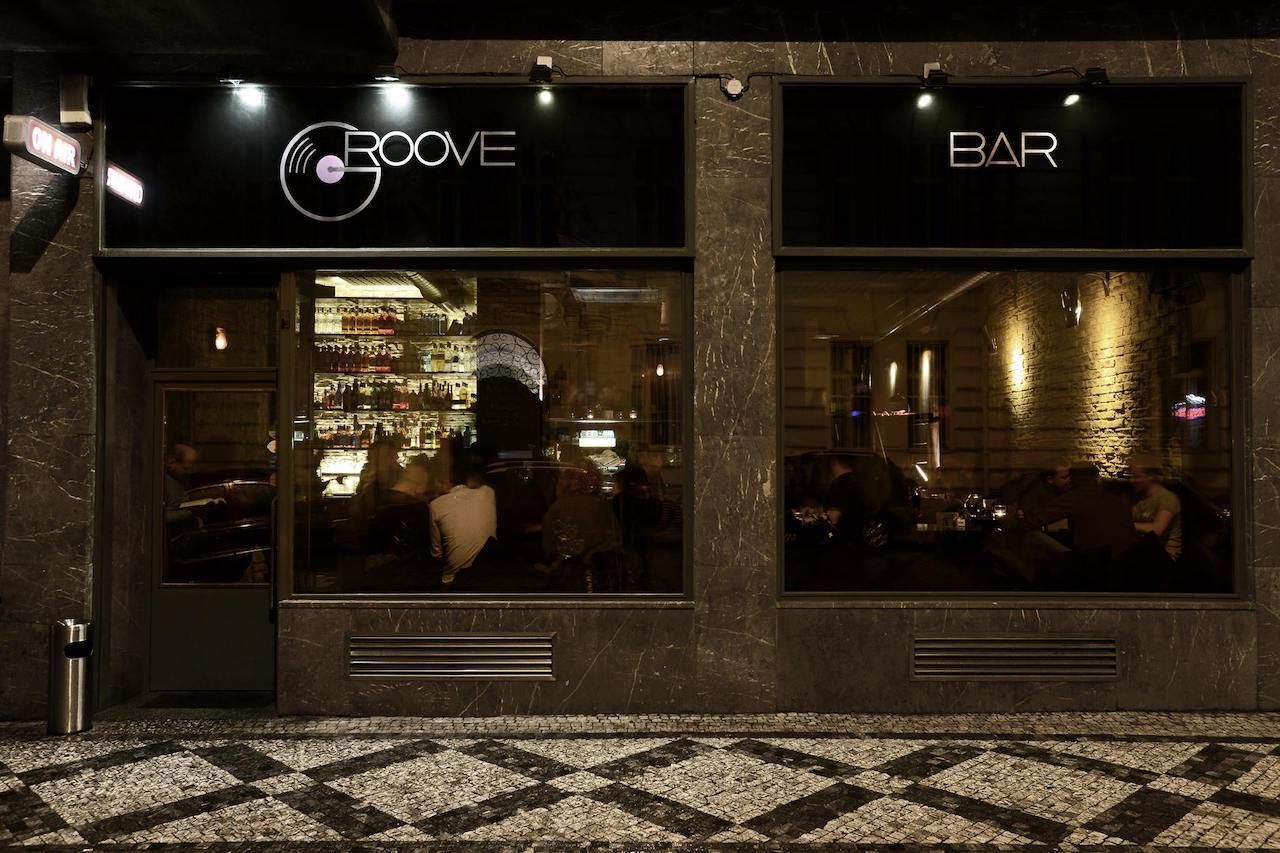 Groove Bar $$ — This slick two-level bar has a hip interior with an industrial chic aesthetic that wouldn’t be out of place in London or New York. There are decent cocktails on the drinks list, plus a savvy electronic soundtrack. While there are DJs on the weekends, there’s no dedicated dancefloor, so it’s more a place for an intimate pre-clubbing drink. There’s also beer and wine, and some tapas dishes if you get peckish. Staff are young, friendly, and international.

Tretter’s $$$ — This cocktail spot ticks all of the boxes. It’s classic and intimate, feels exclusive, has cozy seating and barfly stools at the handsome wooden bar, and the drinks are expertly made without extending too far into trendy mixology territory. It’s popular with locals as well as tourists, so get there early or reserve a table in advance.

U Medvídků $ — One of Prague’s historic breweries that dates back to the 15th century, the name of this bar translates to “At The Little Bears.” It’s also a restaurant and hotel. Grab a seat amidst the maze of vaulted beer halls at one of the thick wooden tables and enjoy local brews — including the incredibly strong X-Beer33 if you’re feeling brave — as well as food made with beer, like beer onion soup and beer goulash. 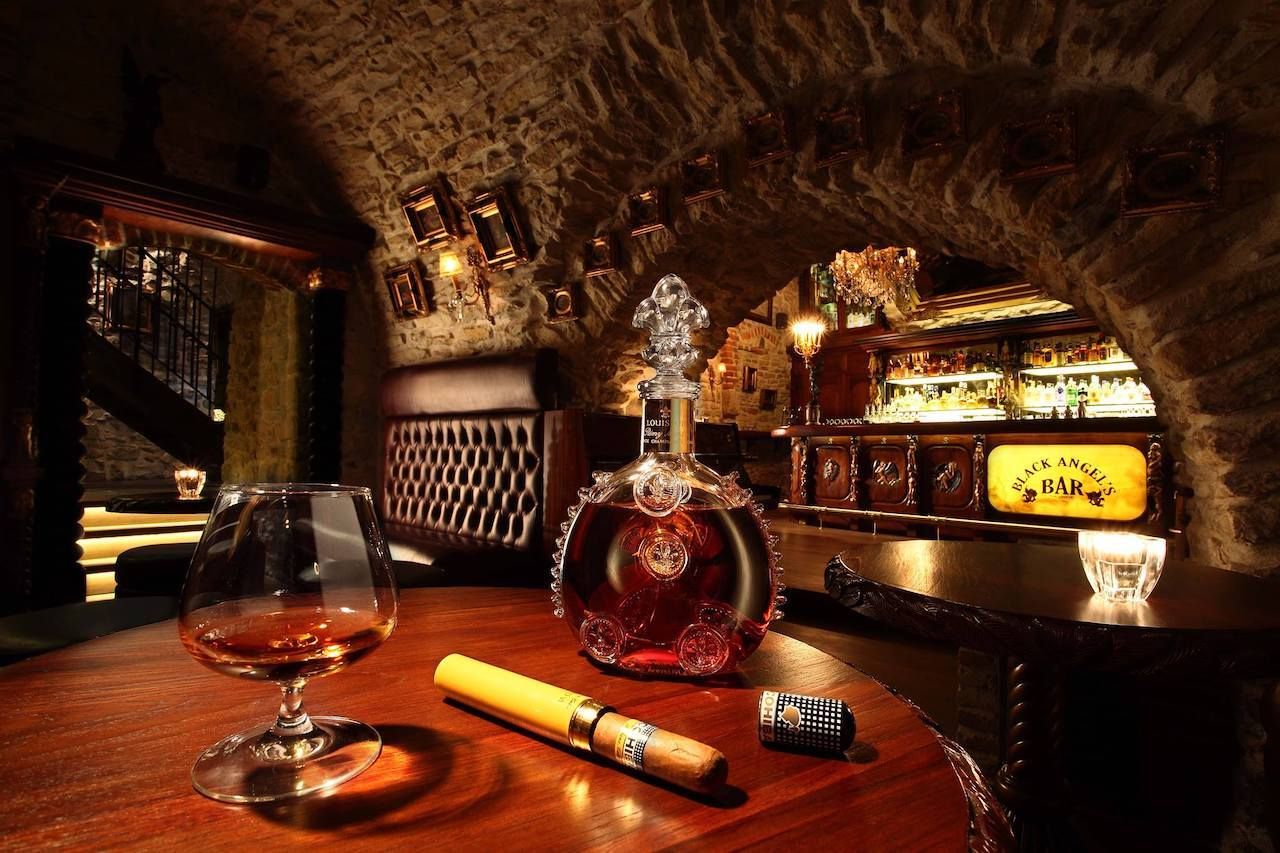 Black Angel’s Bar $$ — Tucked away in the cellar of the historic Hotel U Prince on Old Town Square, this atmospheric, dimly lit bar has a bit of a speakeasy vibe complete with red leather banquettes and ornate chandeliers. Gentle live piano in the evenings adds a romantic touch, while the drinks, and service, lean toward the classics.

Chapeau Rouge $$ — This well-known party pub has been bringing locals and tourists together for decades. It has three levels, two of them below ground, that can get crowded, but it’s generally fun if you can handle the loud music and upbeat ambiance. Prices are decent even if the drinks are not too sophisticated (absinthe and Red Bull anyone?), and there are regular themed parties, DJs, and live music.

M1 Lounge Bar & Club $$ — One of the city’s slickest clubs, the music at M1 is a glossy soundtrack of hip hop, R&B, and house music guided by local and international DJs. The crowd leans young and global, and includes the occasional celebrity — Wiz Khalifa and Ghostface Killa have both dropped by. There’s a broad drinks list, sandwiches and snacks on offer, and the option for VIP bottle service, too.

Roxy $$ — Located inside of a former Art Deco cinema that dates back to the 1920s, Roxy has been presenting Czech and international artists of all musical styles since the 90s. As well as alternative rock and indie bands, there have also been top-notch DJ appearances from the likes of artists like Laurent Garnier. With walls plastered with contemporary Czech art and a theater (NoD), a restaurant, and a gallery on site, there are plenty of reasons to head here for a memorable night out. 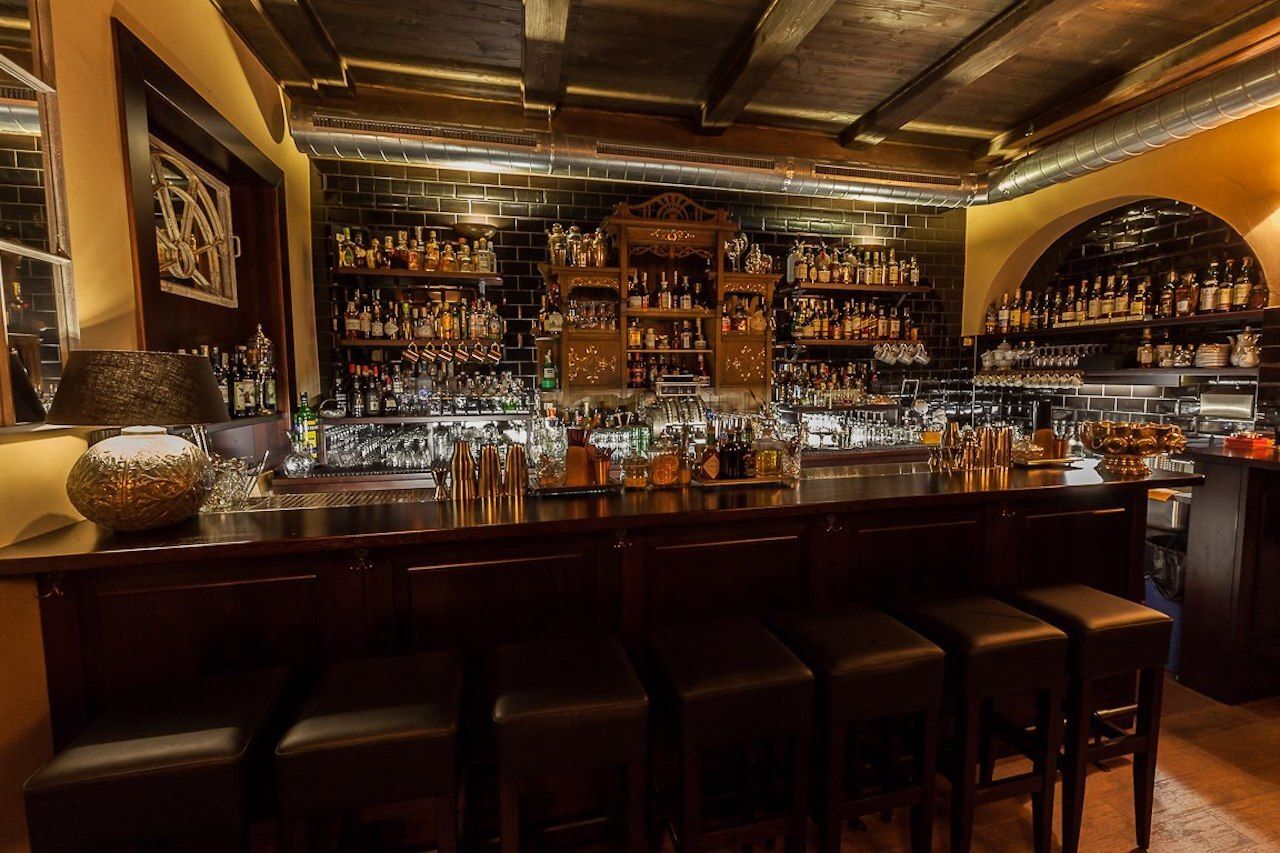 Hemingway Bar $$ — As the name suggests, this swanky two-floor cocktail spot indulges in some throwback literary nostalgia with handsome wood-heavy rooms, old-time photos on the walls (including some of Papa), and classy leather banquettes. Not only does it have the largest absinthe selection in the country, it also has over 200 types of rum, plentiful sparkling wines, and fresh juices and homemade bitters to go with the high-end spirits. Needless to say, you won’t go thirsty.

T-Anker Bar $$ — This quirky but fun bar is on the roof of the Soviet-era Kotva mall. As well as splendid views across Old Town from its large terrace, it also has a microbrewery with a great selection of weekly-changing local and international beers (nine from the taps, as well as dozens of bottles) that range from dark ales to wheat beers. The food menu is a summery mix of risottos, fish dishes, and grilled meats, and the music — often 80s hits — gets turned up in the evening. 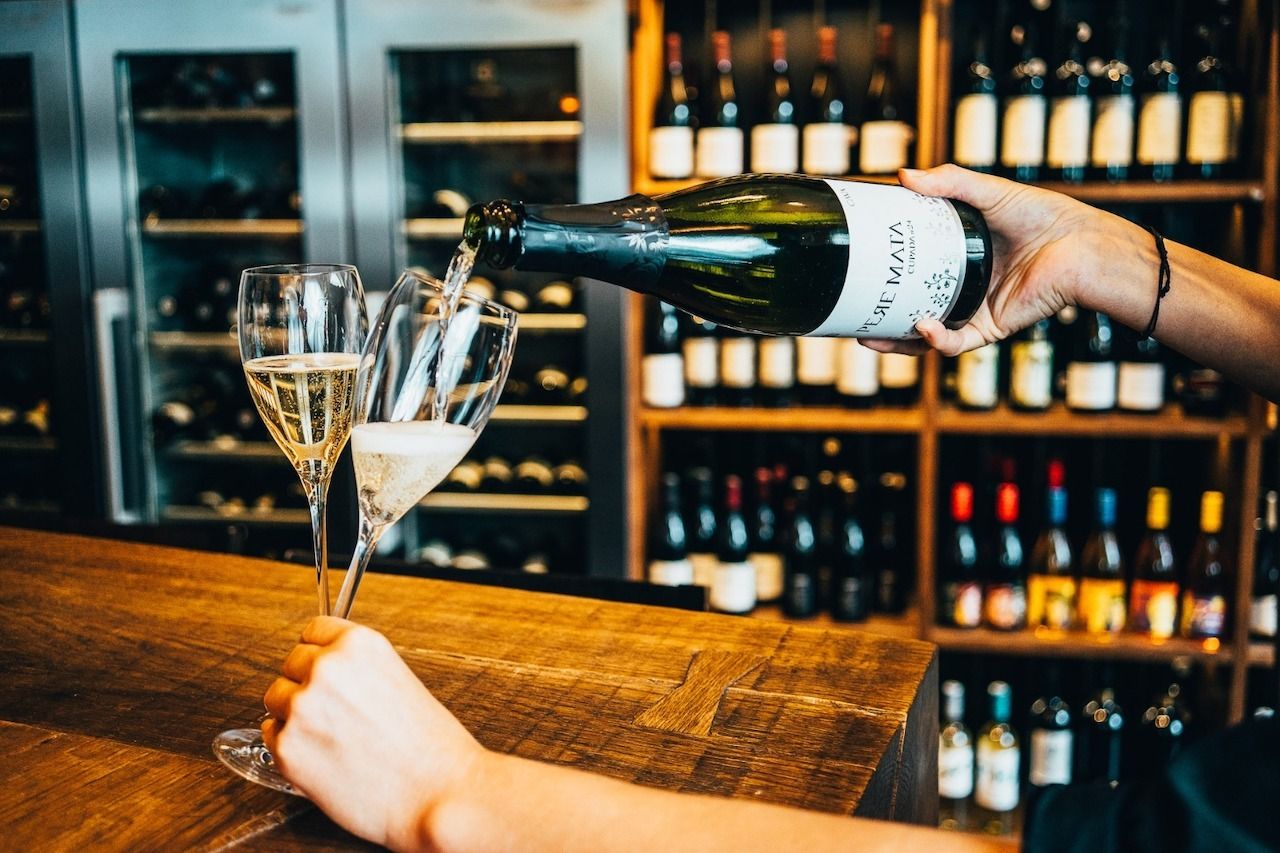 Velký Vinograf $$ — A fine place for wine lovers, a sommelier opened this swish bar (a sister establishment to Maly Vinograf across the river) to serve up Czech wines. By now, it has expanded to more than a thousand options from across the globe, and most come from small family winemakers. Still, the Czech wines remain a firm favorite with both locals and tourists. The interior’s long wooden tables and large windows are inviting, and there are meat and cheese plates for sustenance.

Craft House Prague $$ — This intimate, simply decorated bar is run by a couple of local craft beer enthusiasts. It has almost 30 taps selling beers that are mostly from the Czech Republic. In addition, there are bottled brews from all over the world, and a separate bar that deals with stronger beverages like double IPAs and Russian imperial stouts. Tasting flights are available, as are several types of Danish-style open sandwiches (smørrebrød).

Gin & Tonic Club $$ — Prague’s first dedicated gin bar focuses on what it’s name suggests. There’s a collection of over 300 types of gin, including many varieties from small producers around the world (there’s a handy tasting menu option if you’re struggling to choose). Service can be hit or miss, but the interior is pleasant, with a blue-tiled bar stocked with dozens of multi-colored bottles. There’s a small patio for summer, and a small food menu, too. 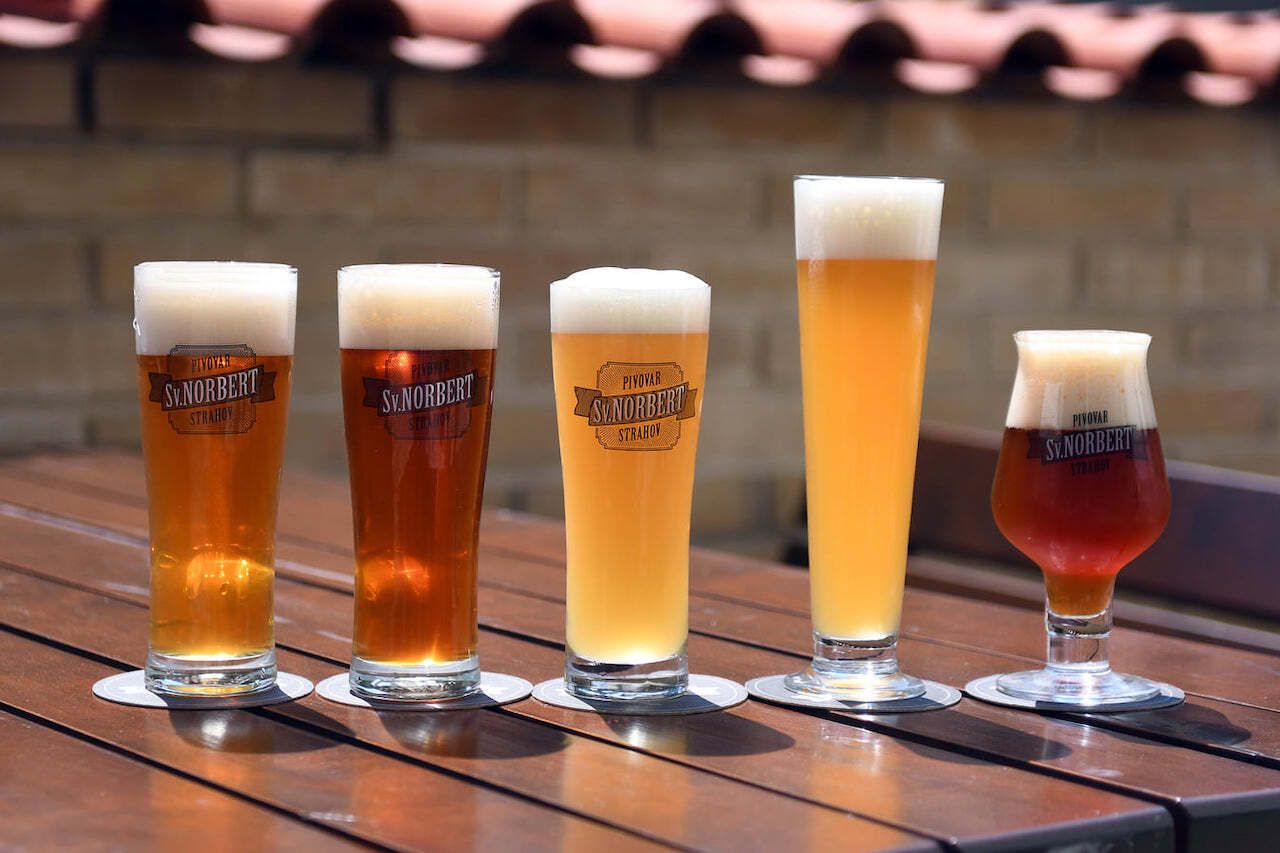 Klasterni Pivovar Strahov $$ — If you’re up in the Prague Castle area and fancy a beer, seek this spot out. Situated just above the Strahov monastery — the monks have been brewing beer here since the 13th century — the aesthetic is contrastively modern, with a main beer hall featuring copper brewing tanks and everything from wheat beers to IPAs and seasonal options on the menu. The associated restaurant offers decent traditional food and a pleasant garden.

Blue Light Bar $$ — This legendary bar, hidden away close to the Malá Strana side of Charles Bridge, has entertained the likes of Bruce Willis and Johnny Depp over its years of service. It’s nothing special inside, just a typical cellar pub with tatty walls plastered with posters, graffiti, and jazz album covers. But it’s precisely this simple, unpretentious vibe that lends its appeal. The drinks menu is equally down to earth, but does extend to wines and basic cocktails.

Jazz Dock $$ — Situated right on the river, this floating concert hall is one of the city’s primary jazz venues. It’s small inside, but the sound is top-notch, the service is friendly, and the bar knocks out some good drinks. Expect a splash of blues alongside the jazz, played by local players and bands as well as international guests. There are also other events such as jazz-related movies. 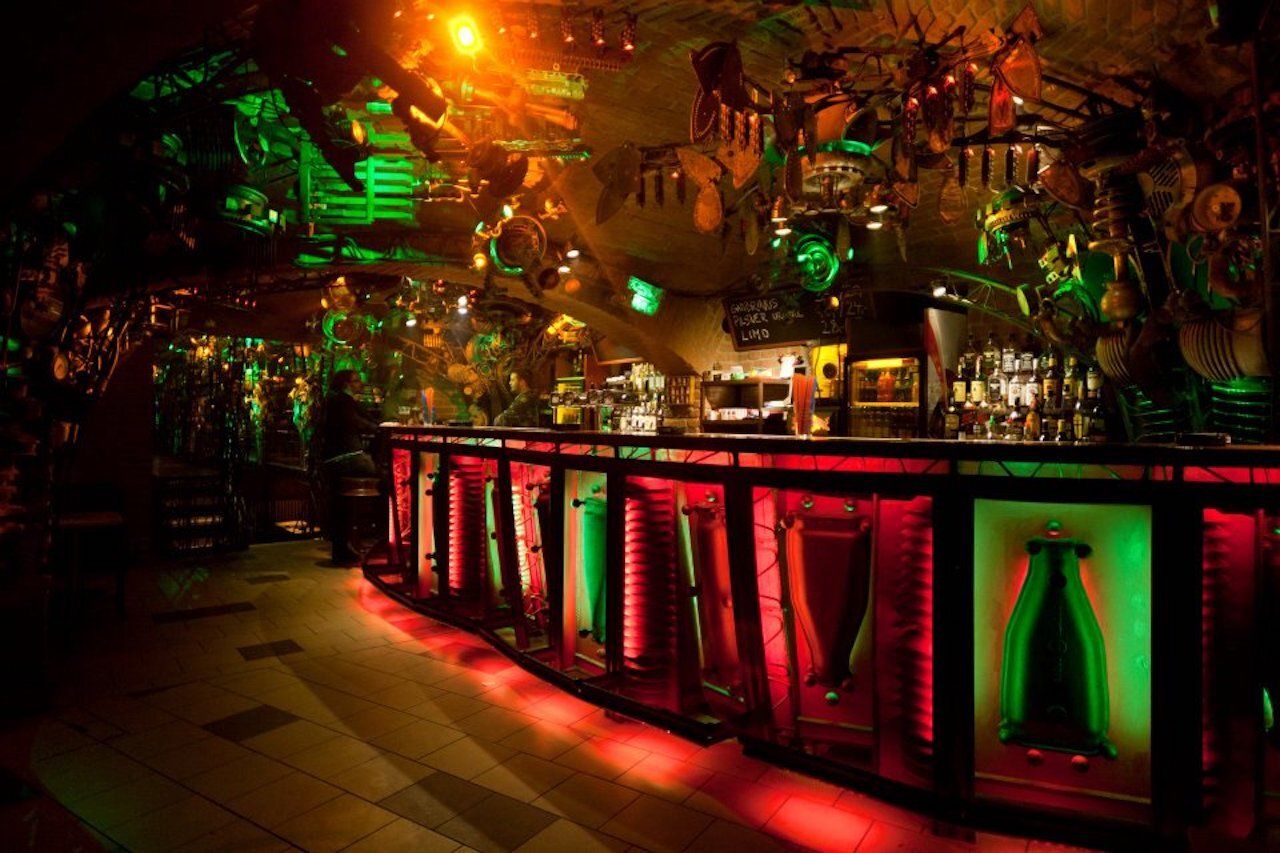 Cross Club $$ — This industrial club in the art hub that is Holešovice has a line up of high-quality DJs, bands, and artists from the Czech Republic, Europe, and beyond. Representing every genre from rock to reggae and dubstep to world beats, it’s always worth keeping an eye on the line up. Look out for the non-music offerings, too, which include plays, readings, and film screenings. There’s also a very good café and restaurant if you want to make an evening of it.

Dvojka $$ — This small and friendly wine bar is run by art gallerist Richard Priesler and has been liberally doused in white paint — literally everything from the furniture to the concrete floors are white — to give it the feel of an artist’s workshop. A pimped up workbench serves as a central table, and vintage refrigerators stacked casually against the back wall contain mostly Czech and European wines. Pull up a stool at the window for some street watching, look out for the changing artworks on the walls, and snack on some tapas if you get hungry.

Radost FX $$ — This venue is a long-standing favorite in the city, and it helped put Vinohrady on the nightlife map. Operating as a vegetarian café by day and a club space by night, it’s located in a residential building with the club on the underground level. Everyone from Paul Van Dyk to Carl Cox has played here, but there are also hip hop and funk nights as well as live bands.

MeetFactory $-$$$ — Prague’s most famous contemporary artist David Černý set this place up as a hub for art, music, theater, and more. Located inside a former glass factory, it has galleries, an artist residency, and a spacious concert hall that can hold up to 800 people. The line-up is a healthy mix of local and international bands and DJs, and there are regular events and collaborations with global festivals.