Prague has a lot of attractions to keep visitors busy and engaged — but there are also some tempting day trips options if you have a little more time, or if you just want a side trip. Some, like Cesky Krumlov and Karlstejn Castle, have a fairytale quality that will appeal to romantics, while others like the “Chapel of Bones” at Sedlec are, well, a little spookier but no less fascinating. It’s also possible to escape the city without going too far, thanks to several parks and gardens around the city, as well as the Divoká Šárka nature reserve. 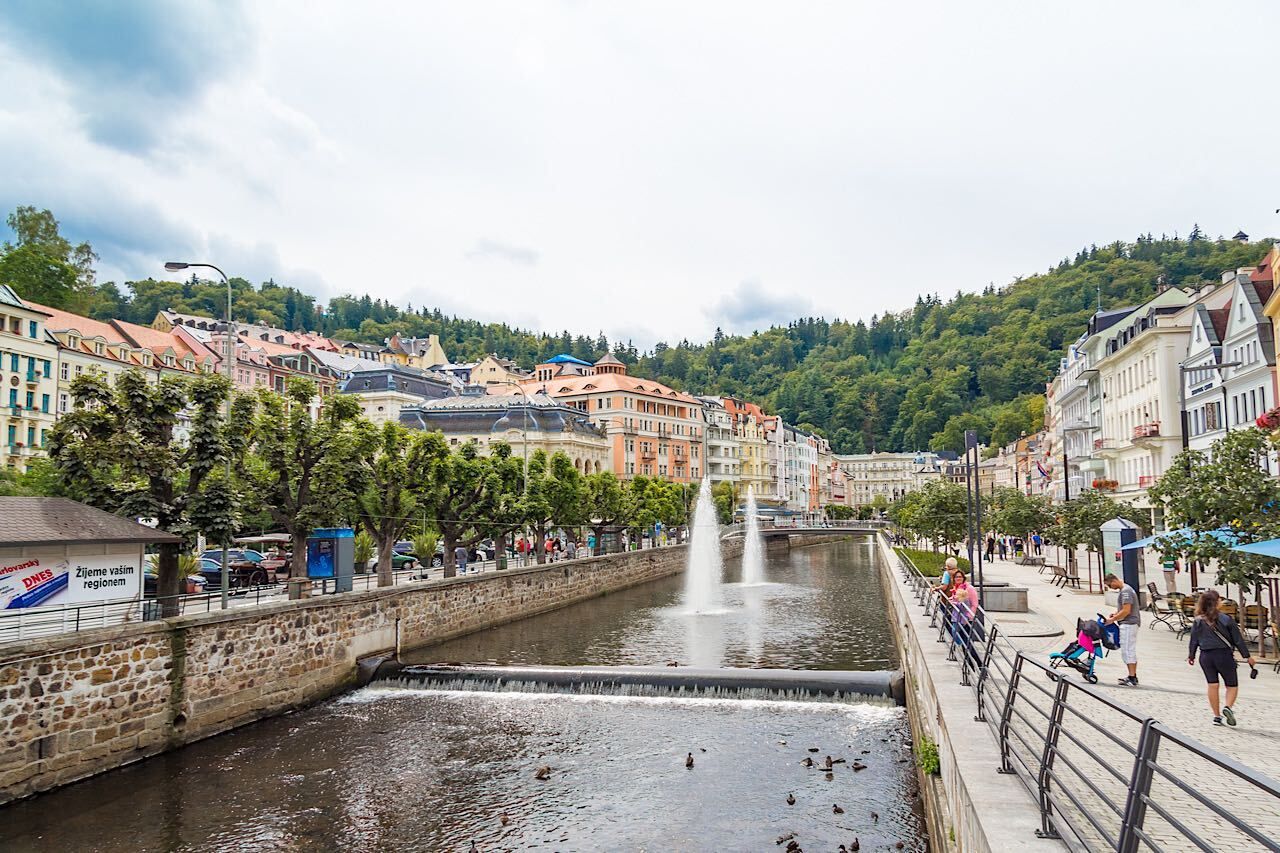 Karlovy Vary — The stunning town of Karlovy Vary has long been renowned for its hot springs, thermal baths, and handsome architecture. Founded by Czech king and Holy Roman Emperor Charles IV in the 14th century, the regal town can be reached in less than two hours by bus from Prague. It has hosted historical luminaries as diverse as Goethe, Gogol, and Casanova, as well as various heads of state, movie stars, and other contemporary celebrities — in part thanks to its film festival, one of Europe’s biggest. Its charming medieval center hosts a slew of grand spa hotels and some impressive sights, among them the Church of St. Mary Magdalene, the Moser Glassworks Museum, and underground hot springs. You’ll find top-notch restaurants and bars too. Nearby is the equally attractive town of Loket, reached in under 20 minutes by car, which fans of Gothic castles won’t want to miss. 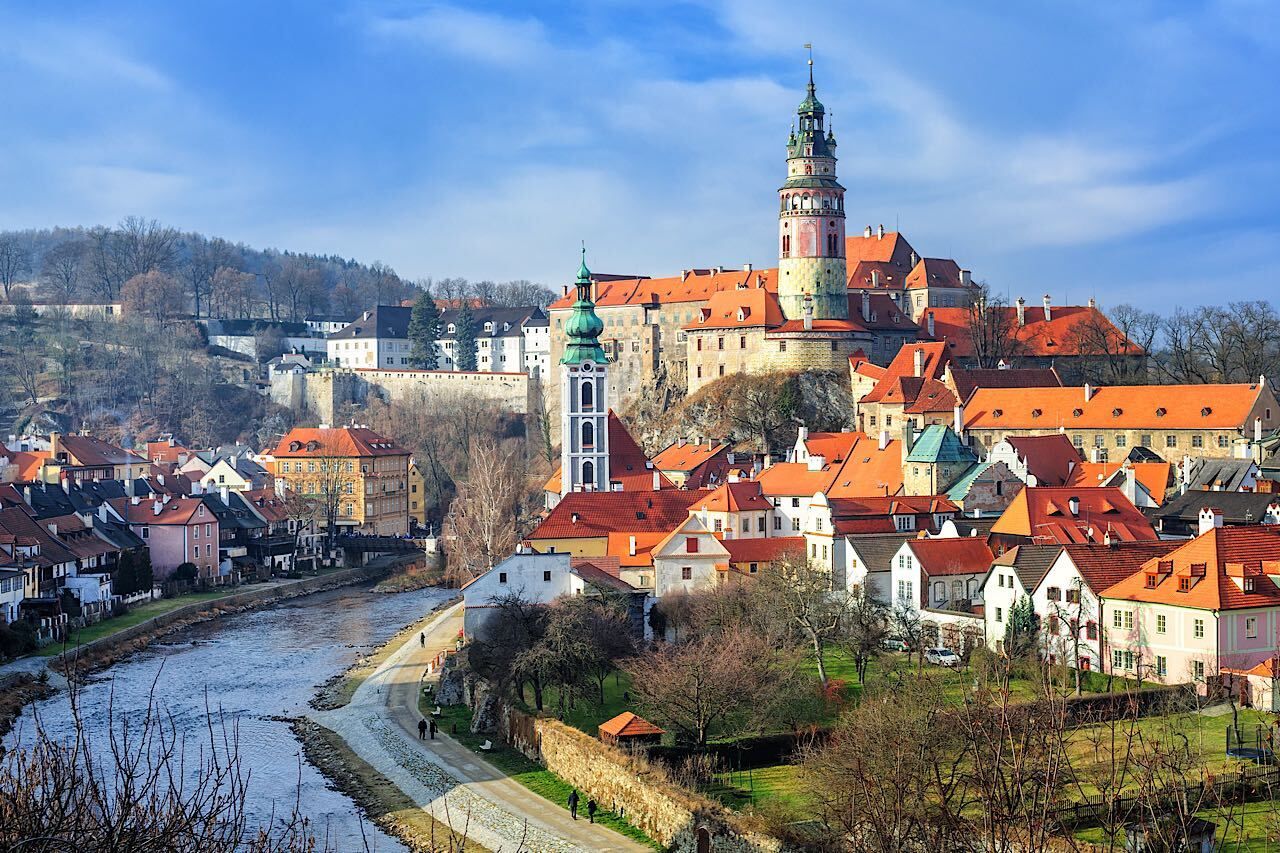 Cesky Krumlov — Situated about two hours south of Prague, the famous fairytale town of Cesky Krumlov is a UNESCO World Heritage site. It’s home to around 14,000 residents and a famous gothic castle complex around which the town was originally founded. Restored many times in its centuries-long history, the castle is perched on a rocky promontory, and offers a baroque theater built in the 1600s and a modern revolving auditorium, plus highly memorable views of the Old Town below. The latter includes hundreds of medieval buildings that today house inns, cafes, galleries, museums and shops, and are set along atmospheric cobblestone streets. The town and castle also have held a steady stream of cultural events, and the surrounding countryside is great for hikes, bike rides, and even some kayaking or rafting on the Vltava. 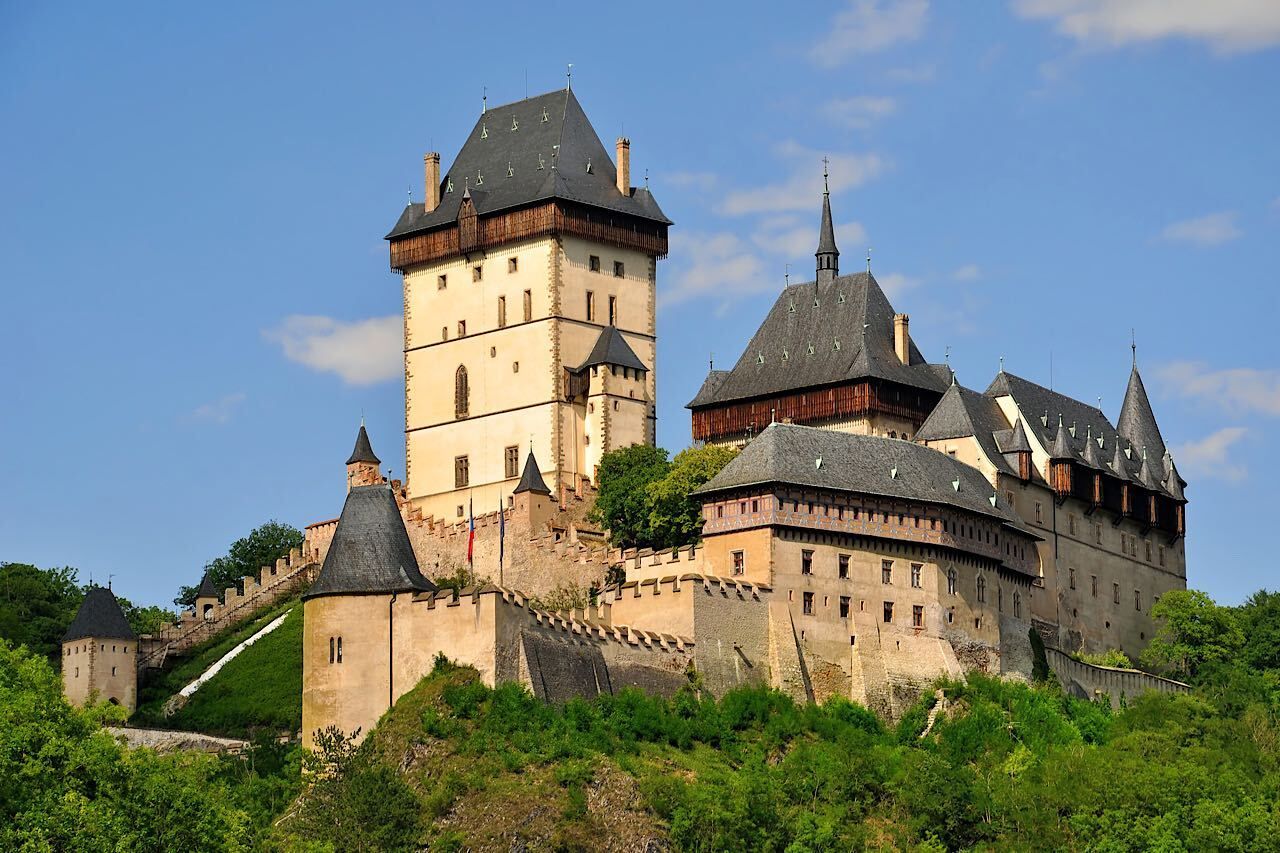 Karlstejn Castle — Just 40 minutes from Prague by train, the Disney-esque Karlstejn Castle is one of the easier day trips to make from Prague. Located atop a hill and surrounded by lush woodlands and vineyards, the castle was constructed for Charles IV between 1348 and 1365, mainly as a place for his royal treasures — including the crown jewels. Reconstructed several times, today its splendorous interior includes the gold-and-jewel-encrusted Chapel of the Holy Cross, a Hall of Knights, a royal bedroom, and an audience hall. Guided tours are available, but even without the tour, it’s worth the 30-minute walk up the hill to admire the castle from outside and enjoy the views. From the castle, it’s a short drive, or a 45-minute hike, to a limestone quarry called Little America, which is connected to a bigger one called Big America and considered Czechia’s “Grand Canyon” via a series of limestone caves. 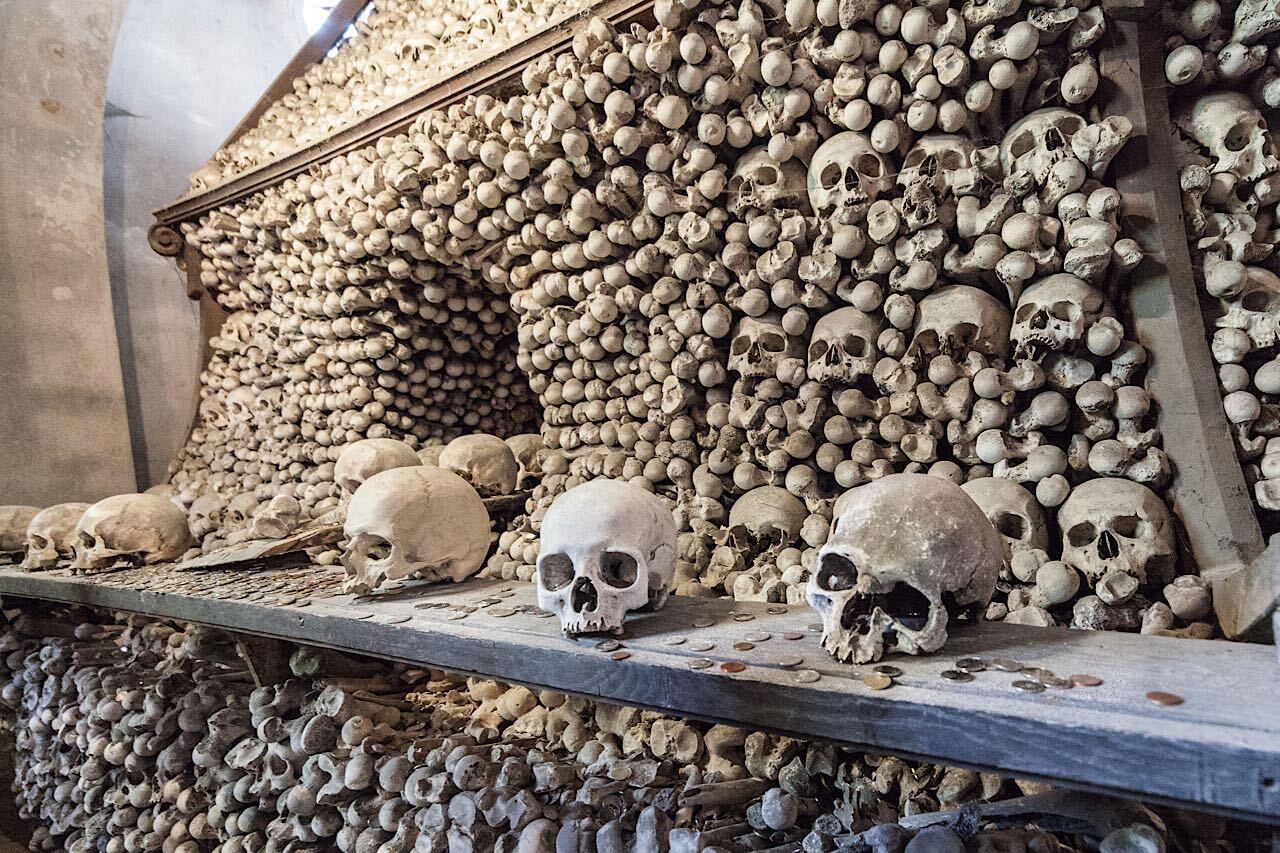 Sedlec Ossuary, Kutná Hora — It takes an hour or so by train from Prague to reach the town of Kutná Hora, which is most famous for the underground chapel of the Cemetery Church of All Saints — also known as the Church of Bones or the Bone Church. This small medieval gothic chapel, a UNESCO World Heritage site, contains tens of thousands of human skeletons (skulls included), which have been used to artfully decorate the chapel’s interior, going as far as a bone chandelier, and a depiction of the Schwarzenberg family’s coat of arms. The ossuary was originally founded in 1142 by Miroslav of Markvartic, with the church actually built afterward on top in the 14th century. Though it seems a little spooky at first sight, it’s actually a peaceful and certainly memorable place to visit. To make a proper day trip out of the visit, head into the main town of Kutná Hora, which houses the Gothic Santa Barbara Church, which is so grand many call it a cathedral, among other grand edifices. In Kutná Hora, you can also have lunch and then pay a visit to the chocolate factory and its small museum. 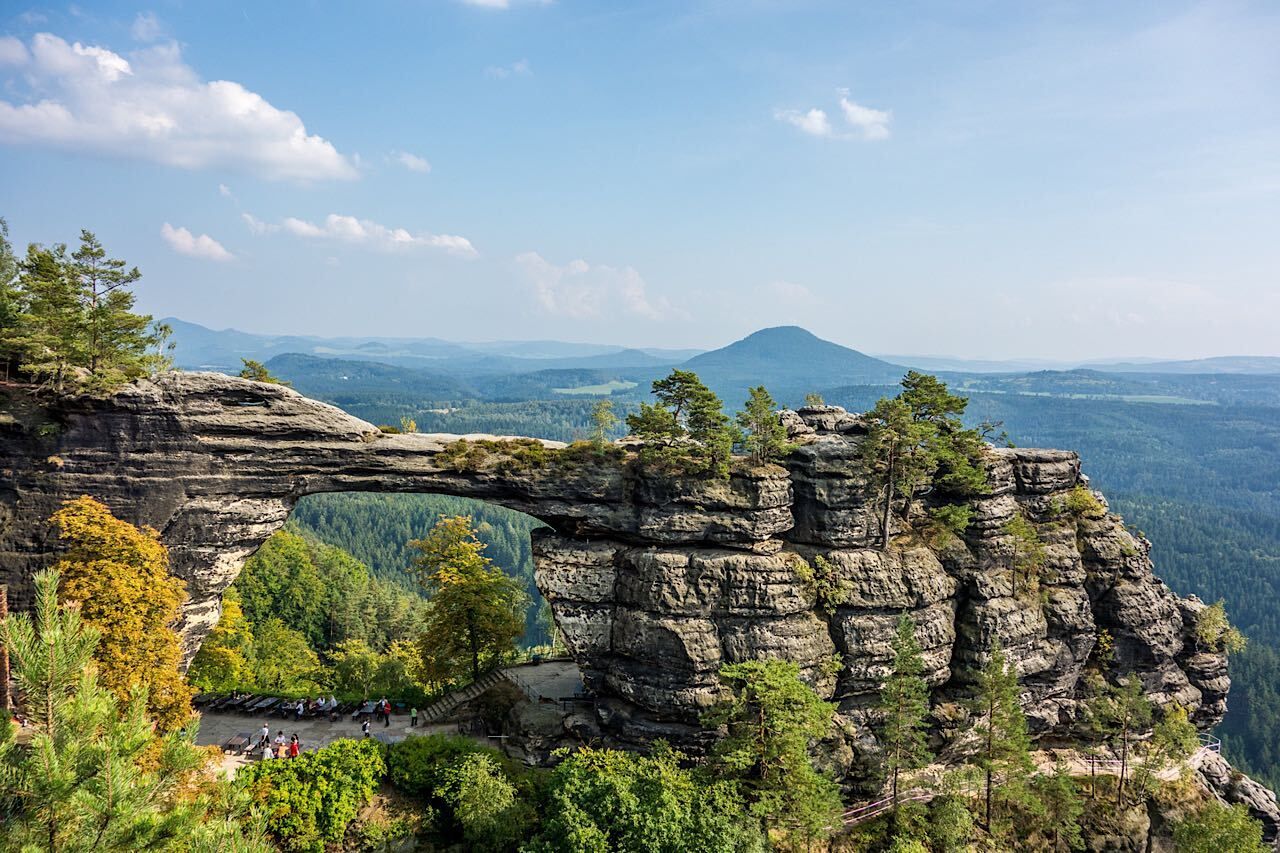 Bohemian Switzerland National Park — Located a couple of hours north of Prague, this national park has some seriously breathtaking scenery that’s best experienced via a decent hike: think verdant valleys, sandstone peaks, and majestic rock formations peppered with pine forests, gently rolling farmland, and picturesque villages. The park, which is 500 miles from the actual country of Switzerland, was so named in the 1700s by visiting Swiss who thought the area reminded them of their home country. What the park is close to is Germany, with which it shares a border. (That north side of the park is the Saxon Switzerland National Park.)

One of the main gateways is Hrensko, where you can find several nature trails leading into the surrounding gorges. Among the many highlights is the Pravcicka Brana, Pravcicka Gate, the largest sandstone arch formation in Europe, which can be seen from one of the most famous tracks — the Gabriel Trail. You could eat lunch in Hrensko or, better yet, pack a sandwich in a backpack and enjoy it with a view while hiking in the park. 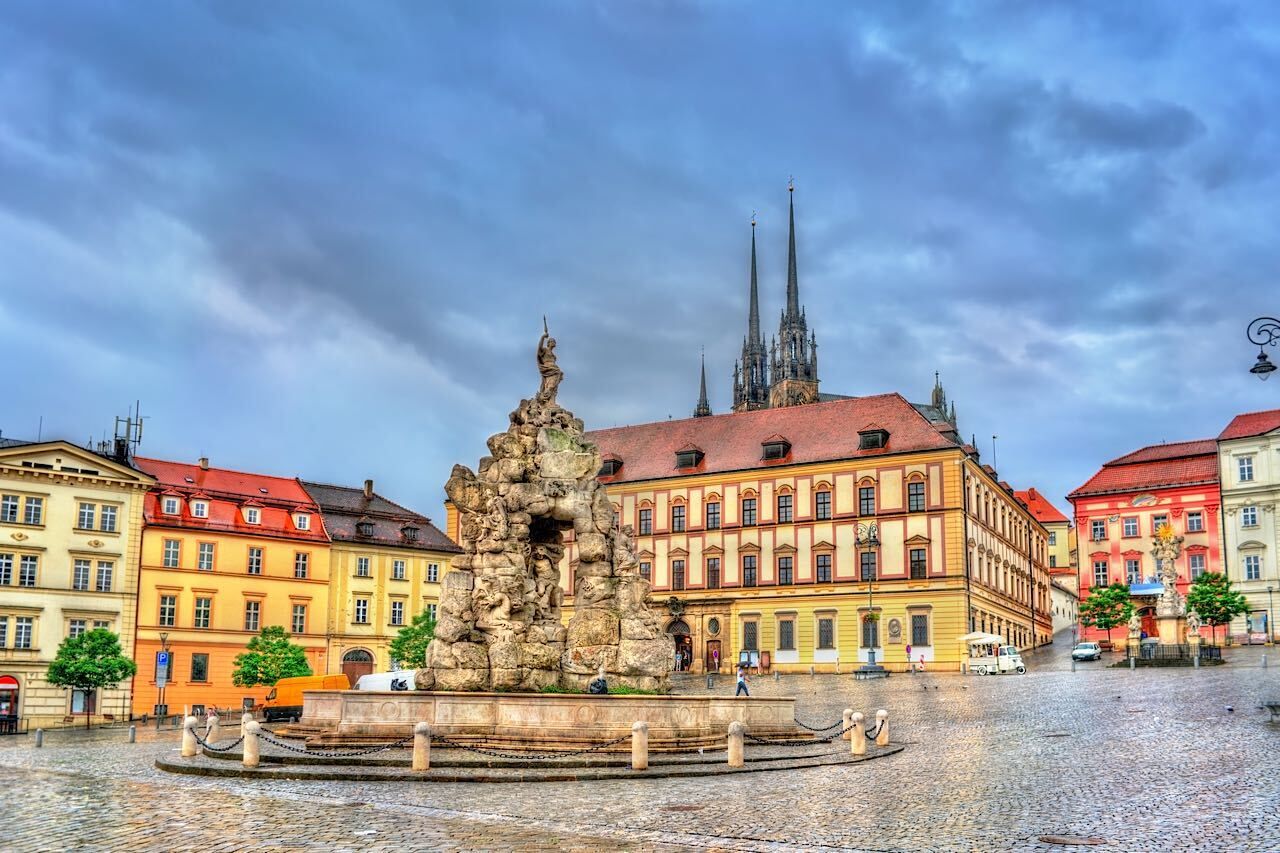 Brno — A two-hour train ride from Prague, Brno is the second-largest city in the Czech Republic and the capital of the Moravia region. A lively university town, it’s home to around 400,000 people and characterized by a slew of vibrant cafes and buzzy nightlife. As well as strolling and admiring the pretty squares and churches, specific sights include the UNESCO-protected Vila Tugendhat, designed by Bauhaus stalwart Ludwig Mies van der Rohe; the geo-gothic Cathedral of St. Peter and Paul, with its soaring double steeple and superb views; and the ossuary at St. Jacob’s Church. More unusual is the cabbage market, which features a labyrinth of passages and cellars, the 10-Z atomic bomb shelter, and an eccentric astronomical clock. Come lunchtime, Brno has its fair share of restaurants serving traditional, meat-heavy Czech dishes. As a university town, though, Brno also has its fair share of veggie-friendly places to eat, including an all-vegan pizzeria.