Prague packs a lot into its compact Old Town, so while it’s easy to move around and explore on foot, it’s still a good idea to have a plan to make the most of it in one day. For your first day in Prague, this itinerary takes in most of the main sights — in particular the Old Town Square with its astronomical clock and fairytale architecture, and the historic Jewish Quarter — while also enjoying some of the great local and internationally minded cafes, bars, and restaurants this vibrant area has to offer. 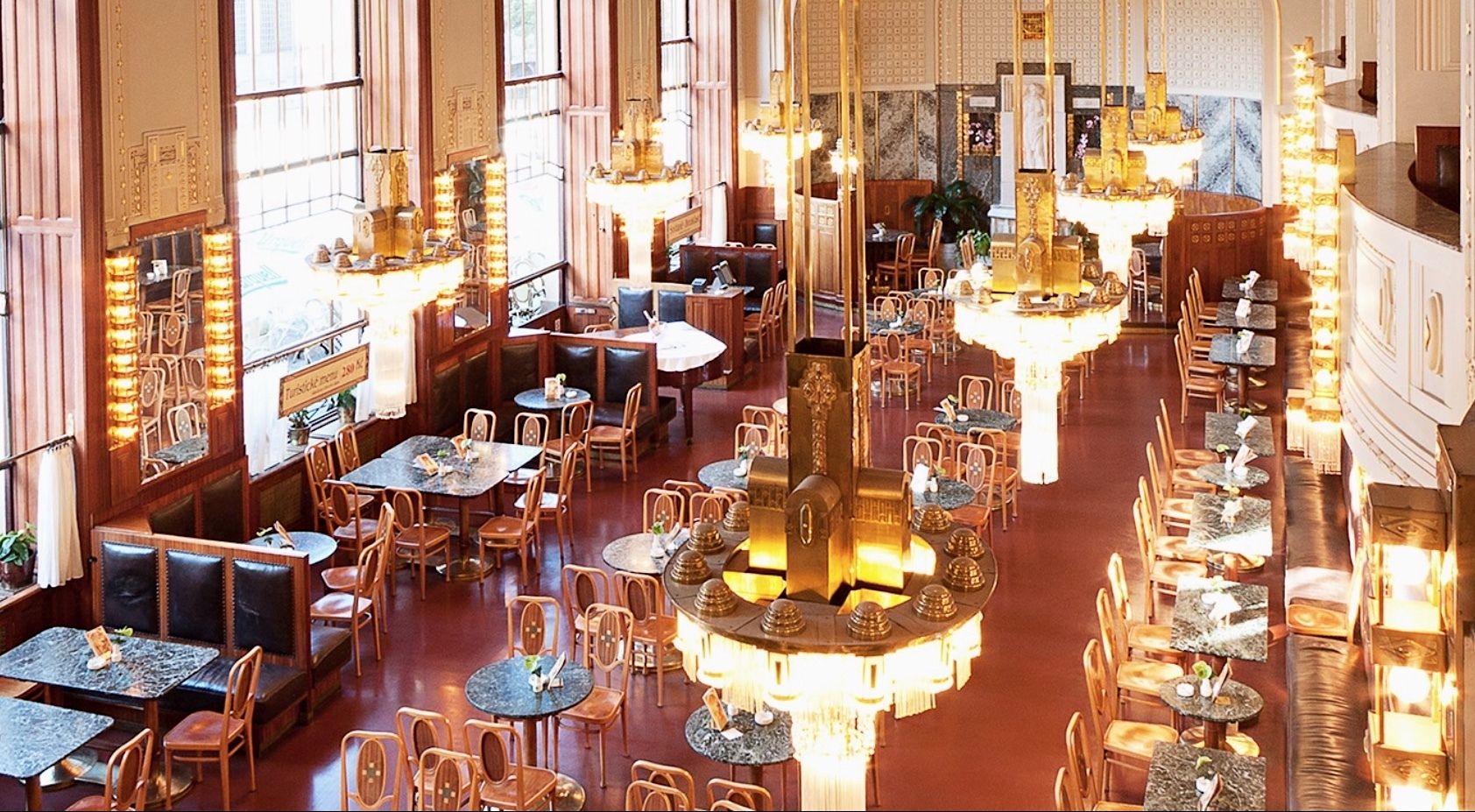 Your first day in Prague is going to be a busy one, so you’ll need some decent breakfast fuel and luckily there are many opportunities in the Old Town. For something traditional and, well, quite majestic, head to the Municipal House Café, an Art Nouveau treasure trove replete with crystal chandeliers, huge windows for people-watching, and gold trimming. Choose from a set breakfast (Czech, French, or English) or a la carte options like scrambled eggs with Prague ham, omelets, and croissants. Don’t forget to admire the 11th-century Powder Tower next door.

If you prefer something more contemporary, try the funky Sisters Bistro, which has delicious chlebíčky (open-faced sandwiches) and top-notch barista coffee and which forms part of a decidedly chic foodie complex. 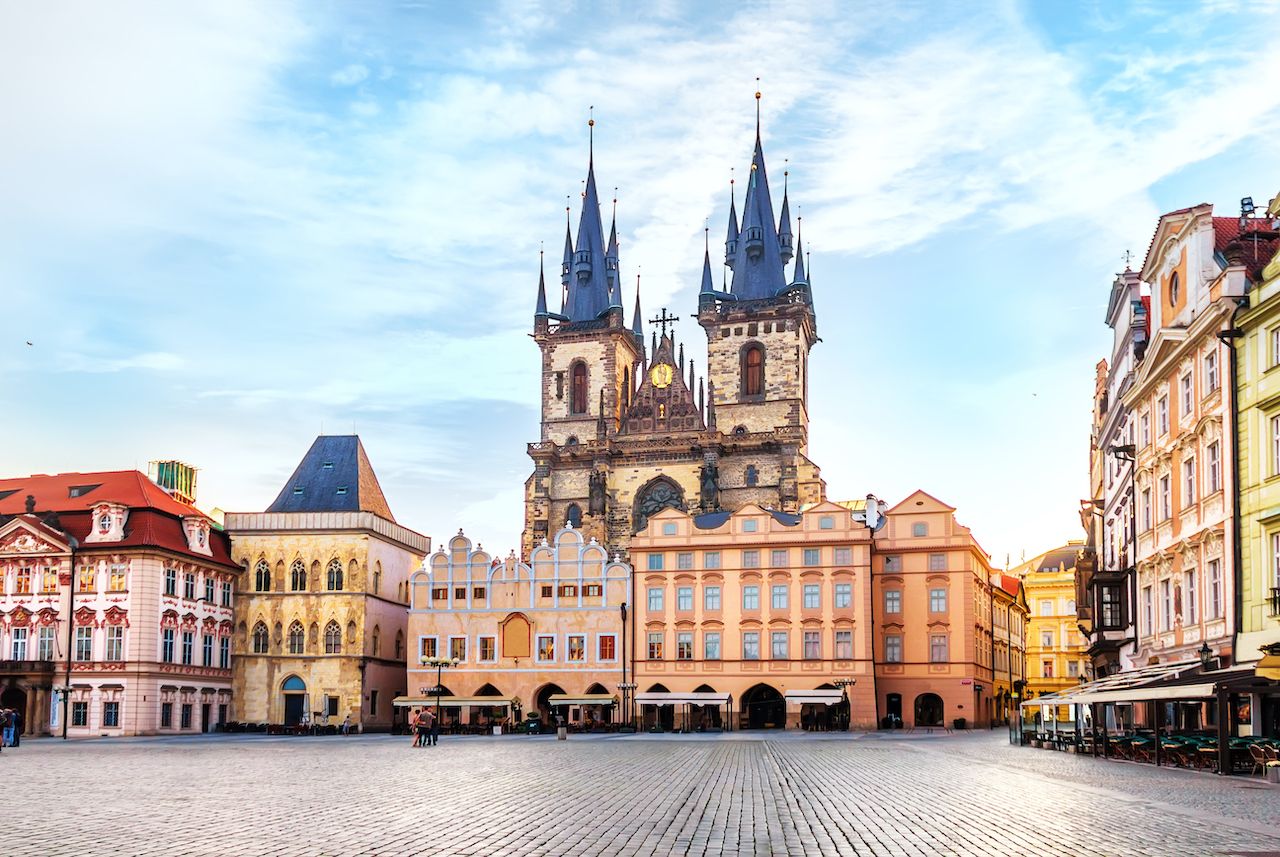 Prague’s Old Town Square is the city’s fairytale heart, with a history that stretches back to the 11th century. It can get pretty busy with tourists, especially in summer, but a stroll around the square is enough to admire the sights from the outside: the Church of Our Lady Before Tyn; the statue of reformer Jan Hus in the middle of the square; the baroque church of St. Nicolas; and the Rococo Goltz-Kinský Palace. The Old Town Hall is where you’ll probably find the biggest visitor clusters, thanks to the famed Astronomical Clock, which was built in 1410 and presents a procession of 12 Apostles on the hour, every hour. If you’re interested, you can also buy tickets for the tower, which offers panoramic views over the square and beyond. 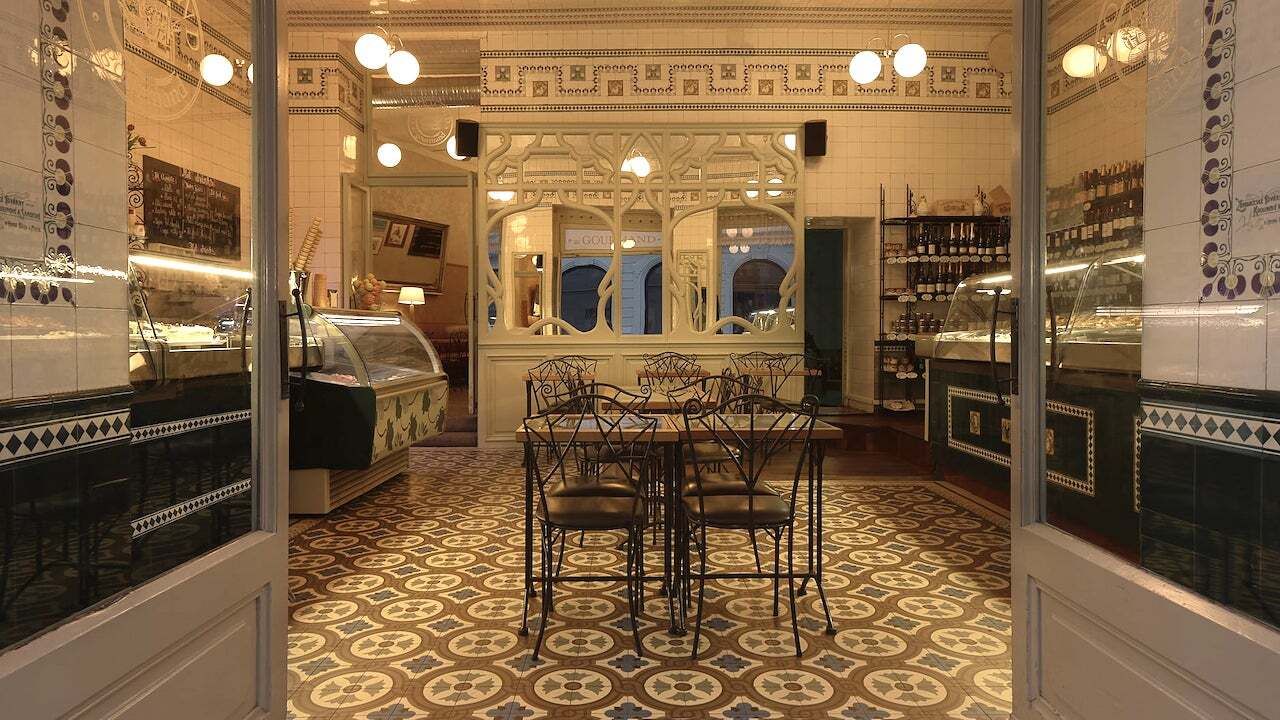 After some time exploring the many shop-lined cobbled streets that lead off and around the square, circle back to its western side to grab lunch at the French-themed patisserie Au Gourmand. It has delicious homemade cakes and ice cream, as well as freshly prepared sandwiches, quiches, and salads, plus heartier dishes like goulash. If you’d rather continue strolling, you can order it as takeout, but there are two charming rooms to eat in and a tiny garden outside if the weather is good.

If you want something more substantial, head to Muc Dong in Old Town. For many years, Vietnamese immigrants were invited to work in communist Czechoslovakia, and they are now a sizable ethnic minority in the country. You’ll find Vietnamese restaurants all over the city, and Muc Dong is a favored one in Old Town. 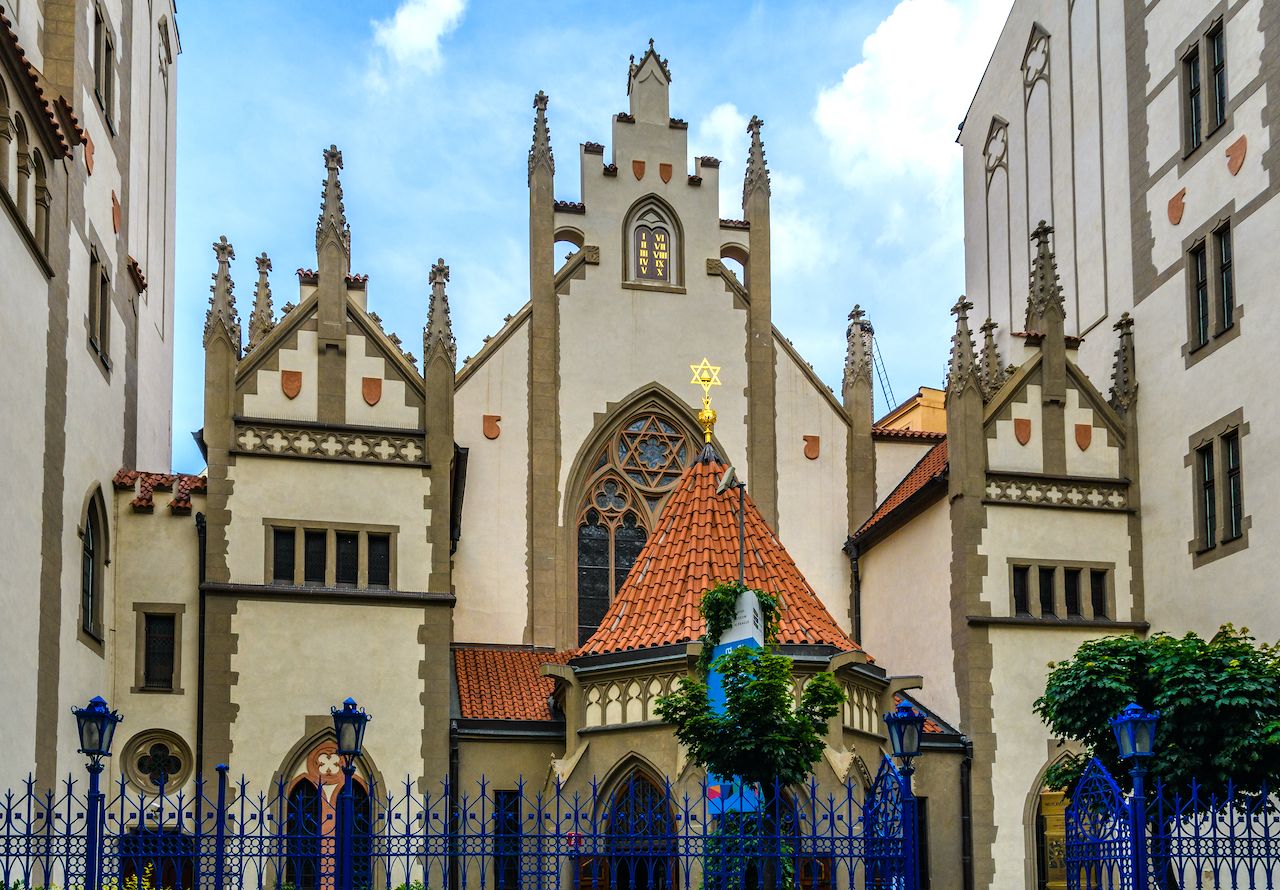 After lunch, head south to Parizska Street, where you’ll pass luxury stores like Louis Vuitton and Burberry. This ode to high-end consumerism leads to an area of the city that has seen its fair share of injustice over the centuries: Josefov, the Jewish Quarter.

The first massacre against Jews in Prague occurred nearly a thousand years ago, and an even bloodier one followed two centuries later. Once Jews were allowed to move outside the confined space in the late 18th century, fewer of them remained here. The quarter’s historic sights — mostly synagogues but also a Jewish Town Hall and cemetery — are grouped together under the Jewish Museum in Prague and can be accessed via a combined entry ticket. Among the highlights are the 16th-century neo-Gothic Maisel Synagogue, the atmospheric Old Jewish Cemetery (whose oldest grave dates from 1439), the Old-New Synagogue, with its antique furnishings and original stonework, as well as the Pinkas Synagogue, the second oldest in the city.

The streets surrounding this quarter are also worth wandering for their shops and cafes. Some of the streets lead down to the Vltava River, which may be a good place to stop and reflect on this thought-provoking tour of a rich and difficult past. 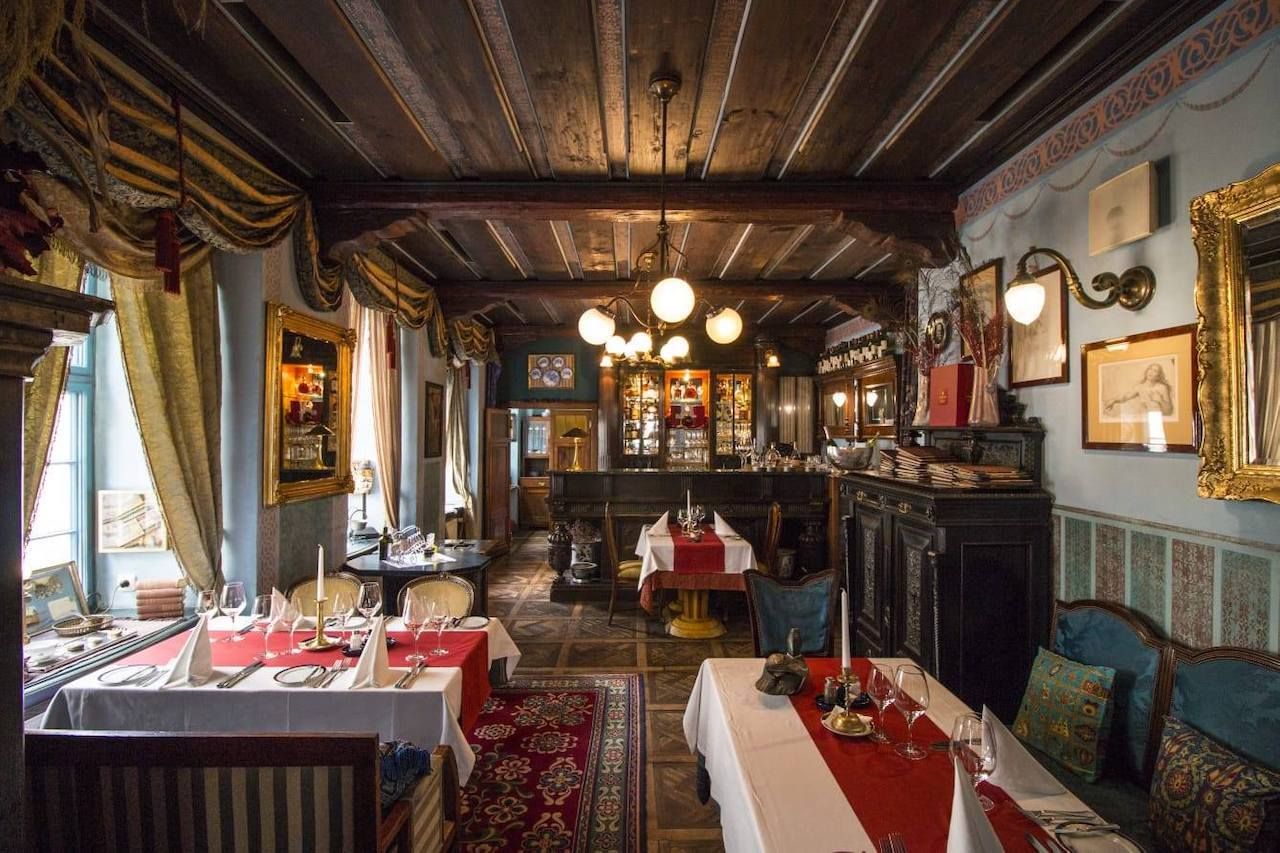 When you’re done exploring, you have plenty of excellent dining options. If you have some cash to splash and feel like something special, head to the Michelin-starred La Degustation, largely considered the finest restaurant in the city for its immaculately prepared, locally sourced set menus. 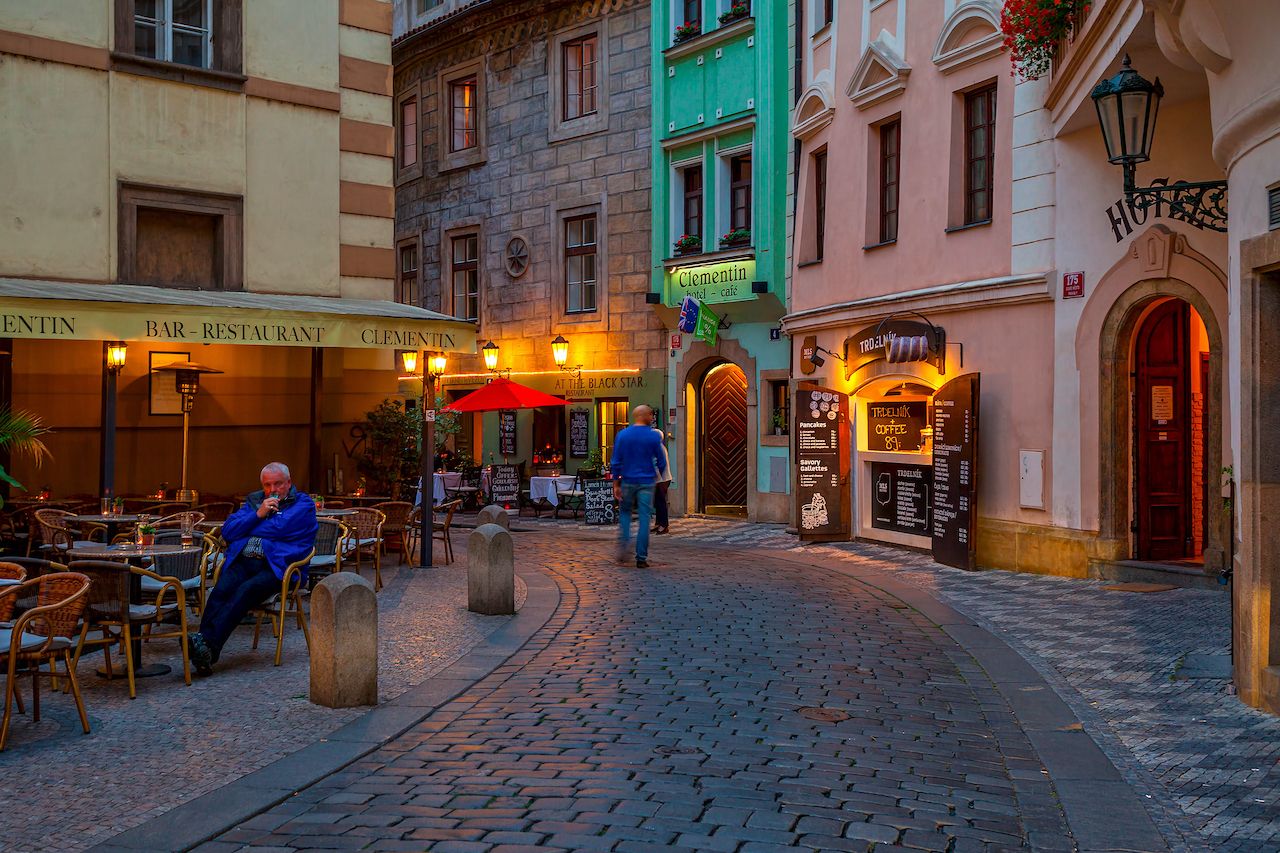 To round out your first day in Prague, you can still hang out in the Old Town, which is jam-packed with drinking spots, including convivial pubs and swankier wine and cocktail bars. The brew pub U Medvídků, dating back to the 15th century, has a series of vaulted beer halls and a plethora of local brews to try, including its home brewed X-Beer33 — the strongest beer in the world at 11.8 percent.

To get your party on, try either the unpretentious party bar Chapeau Rouge, with regular bands, DJs, and events, or see which live bands are playing at Roxy.