Prague is much more than just a pretty face. Beyond the handsome buildings and soaring spires lies a world of fascinating art and culture, displayed in a diverse range of museums and galleries, theaters and opera houses, architecture and street art. Beyond the big hitters like the National Museum and National Gallery, there are specialist institutions devoted to local figures like the Kafka Museum and Alphonso Mucha, plus many independent galleries showcasing local and global contemporary art such as Dox and MeetFactory. 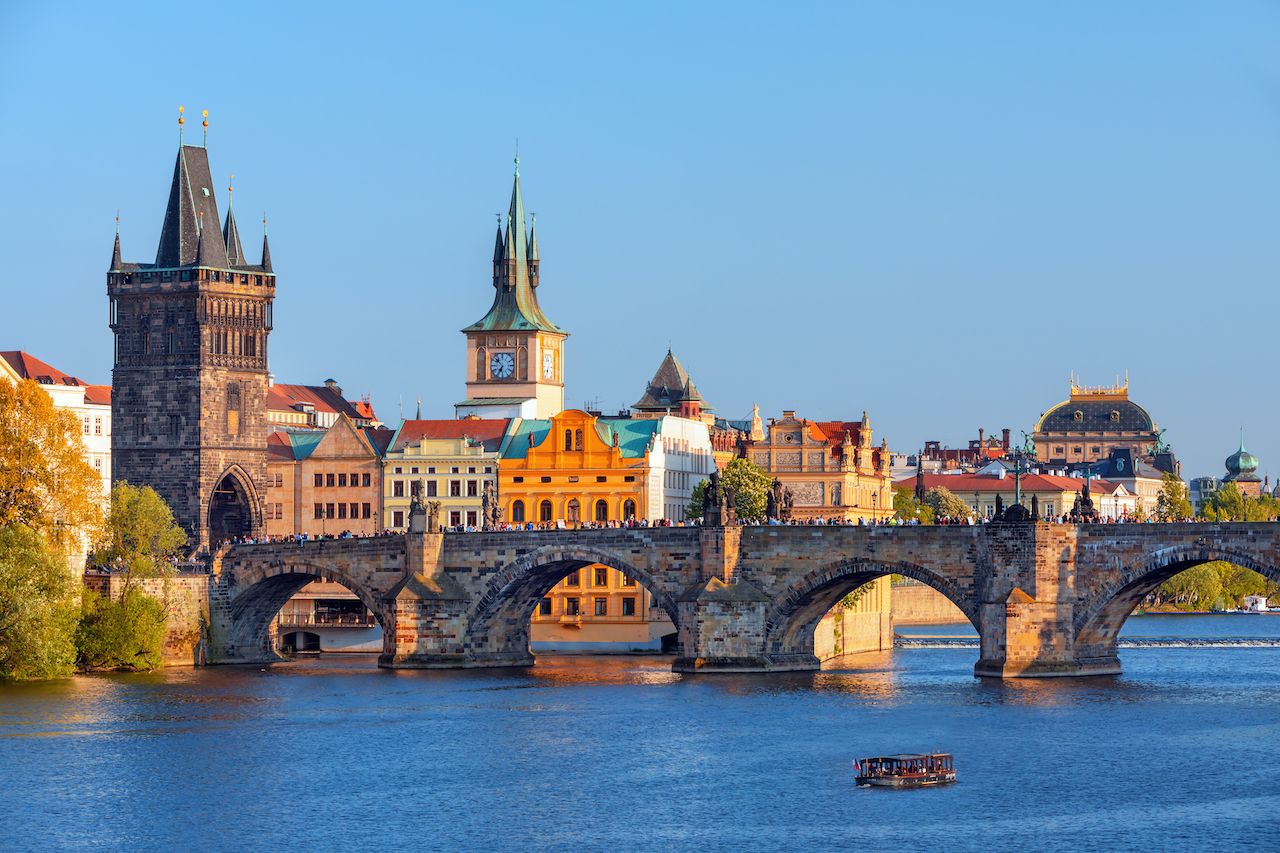 Charles Bridge — Another of the city’s most iconic landmarks, the scenic, statue-lined Charles Bridge has linked the Old Town with the neighborhood of Malá Strana since 1402. King Charles IV commissioned its 30 baroque statues of saints in the 17th century, but today, the statues are contemporary copies. Two picturesque stone towers bookend Charles Bridge — it’s possible to climb up to a viewing gallery inside the gothic structure on the Old Town side. Though usually filled with tourists and studded with sketch portrait artists and colorful musicians, it’s difficult not to feel a sense of history when crossing. And the views of the Vltava river and its elegant embankment buildings from both sides are memorable and magical. 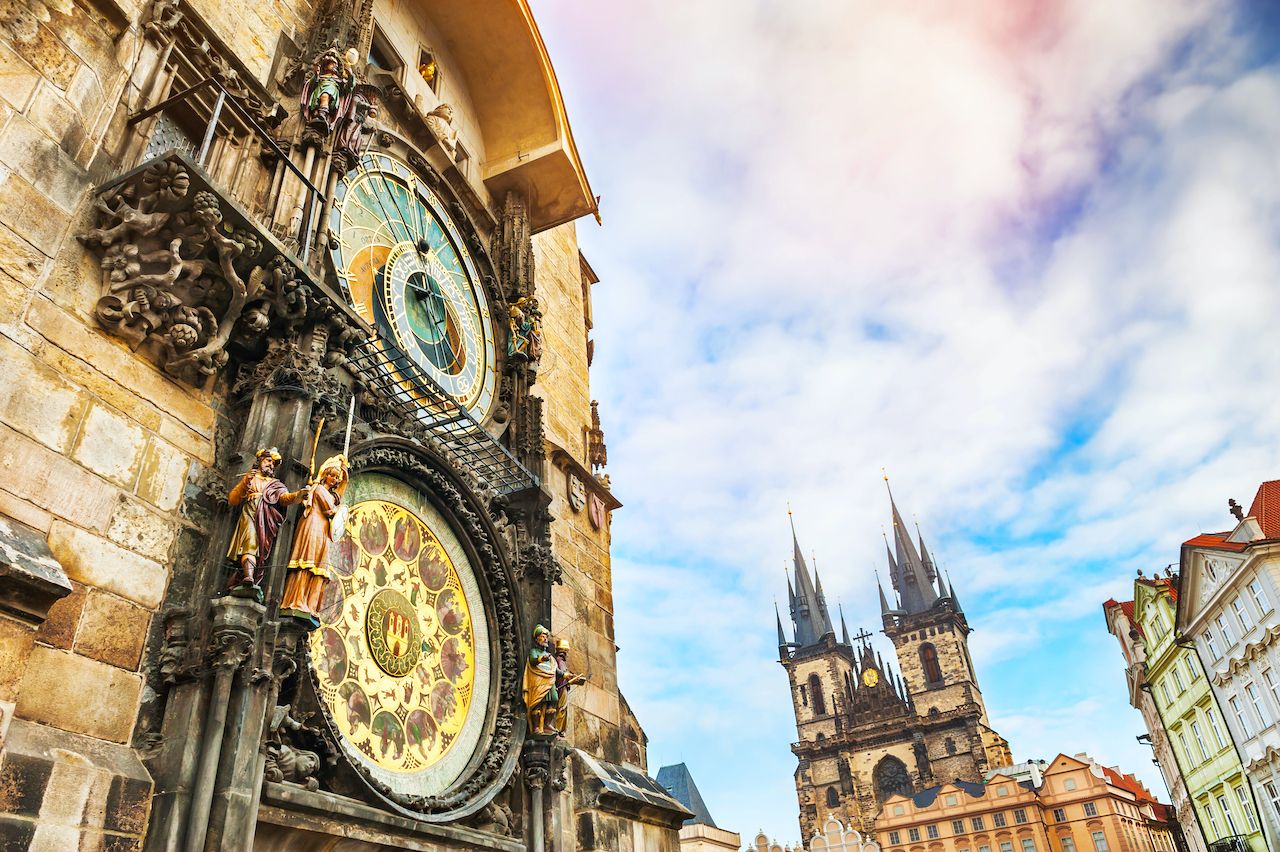 Astronomical Clock — The most popular attraction on Old Town Square, Prague’s Astronomical Clock dates back to 1410. Following a slew of reconstructions over the centuries, it remains a decidedly impressive phenomenon that consists of several intricately engineered moving sections. These include an astrolabe face and a mechanism of Twelve Apostles that ‘parade’ every hour for the gathered crowds of tourists, along with other figures representing sins (Vanity, Greed, Lust). The clock is part of the Old Town Hall building, whose interior features halls from different periods, an exhibition on the structure, and great views from the tower. It’s also possible to buy a ticket and watch the clock show from inside the tower’s chapel. 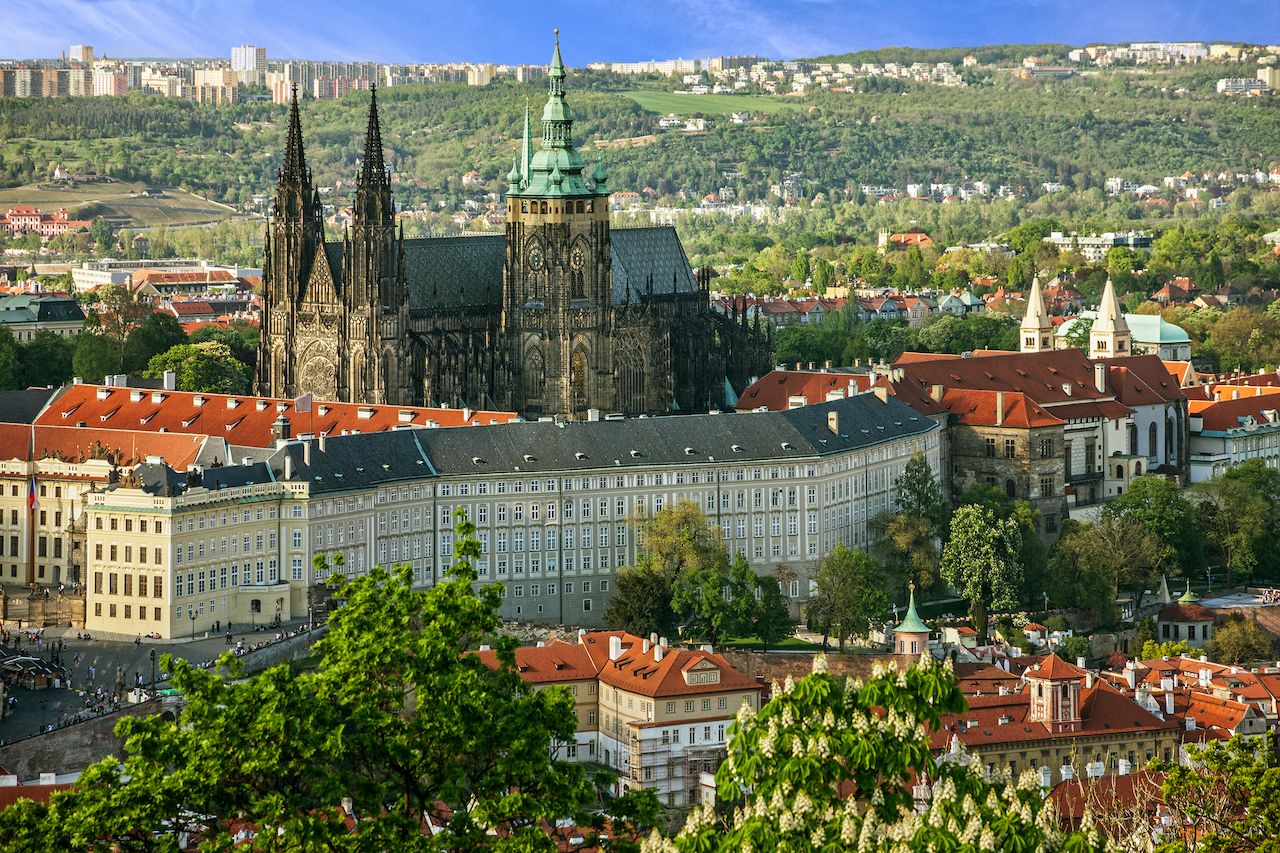 Prague Castle — The sprawling Prague Castle complex — a UNESCO World Heritage site — was founded in the late ninth century. The place where rulers like Charles IV and Rudolph II once called home comprises several fascinating and historic buildings. Despite being one of the largest contiguous castle complexes in the world, it’s pretty easy to just walk around the grounds and find them all along the way — St. Vitus’ Cathedral, the Old Royal Palace, the Romanesque St. George’s Basilica, plus an assortment of palaces, prisons, and buildings that today house museums, galleries, and cafés. Be sure to explore the ‘Story of Prague Castle’ exhibition if you are interested in Czech history. And don’t miss Golden Lane, a street lined with small shop fronts and residences built in the 16th century, originally for alchemists and castle servants; Kafka lived at No. 22 for a short time. 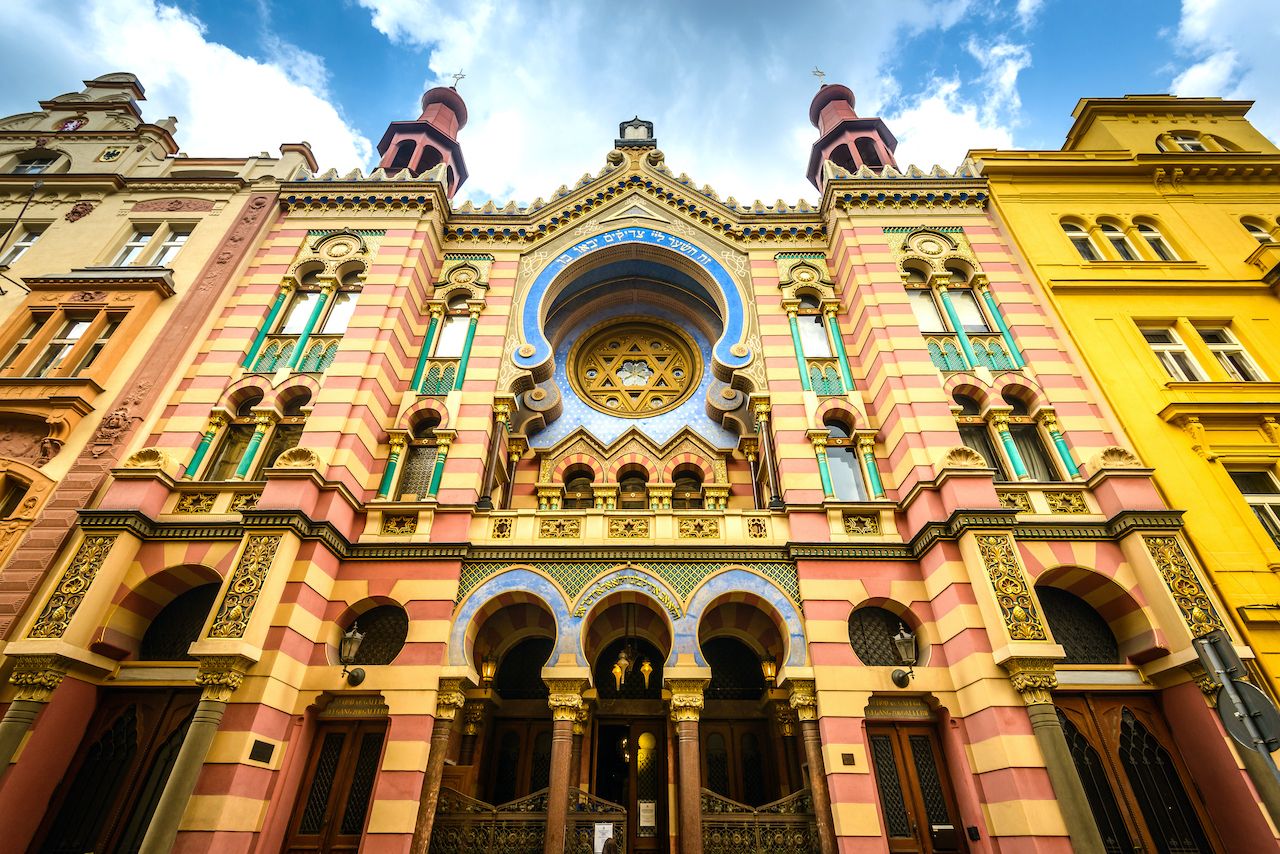 Jewish Quarter — Prague’s historic Jewish Quarter (Josefov) is located between the Old Town and the Vltava river. Though it officially includes many different streets and buildings (including high-end shopping street Pariska), the main historic buildings are part of the Jewish Museum. Once part of a walled-off ghetto, these sights include several synagogues, including the Maisel Synagogue, Spanish Synagogue, and the 13th-century Gothic Old-New Synagogue (the oldest in central Europe), plus the Old Jewish Cemetery with over 12,000 tombstones. On Dusni street, there is also a sculpture of Franz Kafka, who was born in this area, by Jaroslav Róna. 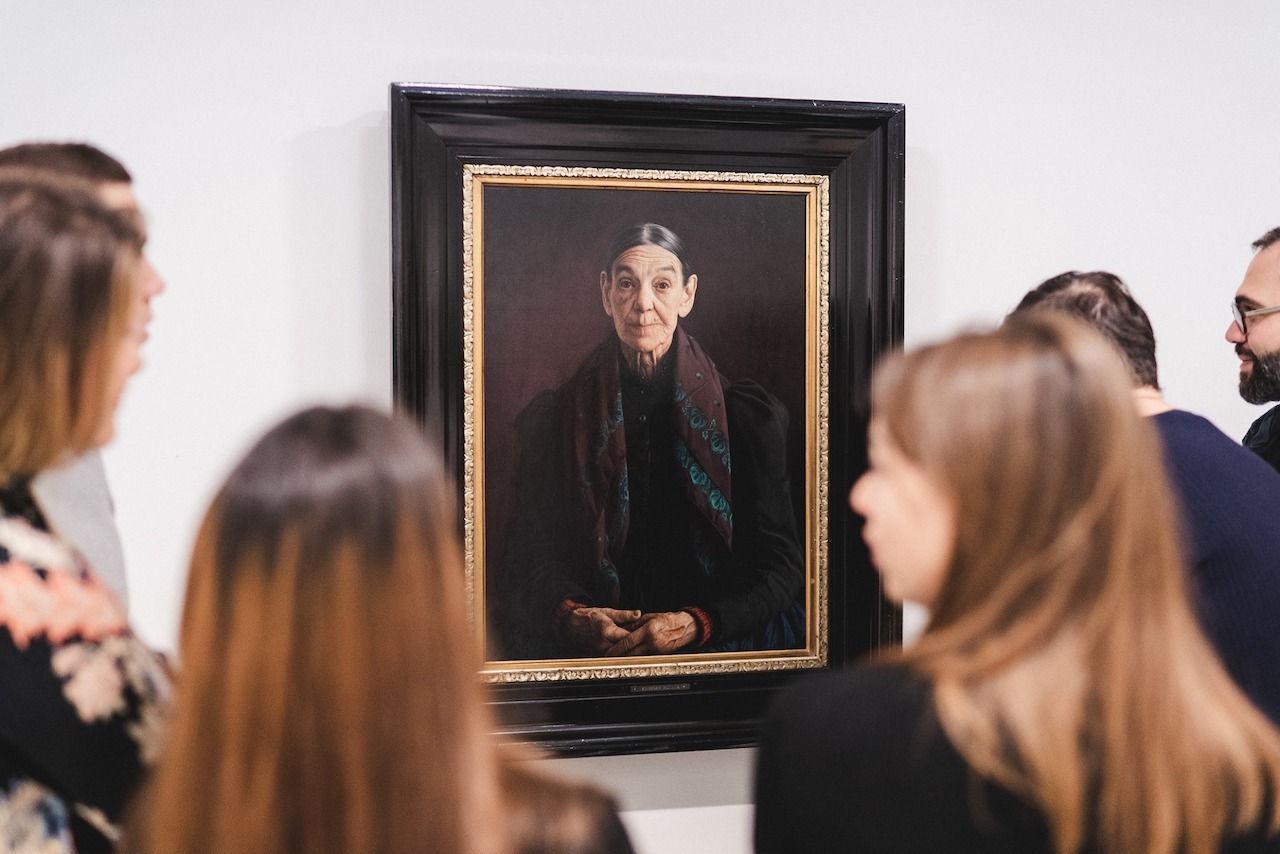 National Gallery — Prague’s National Gallery, the institution responsible for homegrown art, has such a vast collection (over 14 million items) that it’s spread out among several buildings across the city. One of these is the striking Trade Fair Palace (Veletržní Palác), a Czech Functionalist structure located in Holešovice, which hosts a varied spread of 20th-century works by celebrated Czech artists like Emil Filla, Josef Šíma, and Josef Čapek. Another is the Schwarzenberg Palace and Sternberg Palace, which both present European Old Masters. And there’s Convent of St Agnes of Bohemia, which displays medieval art from Bohemia and Central Europe. Many of the buildings also host temporary exhibitions, so it’s worth checking online before your visit to see what’s on. 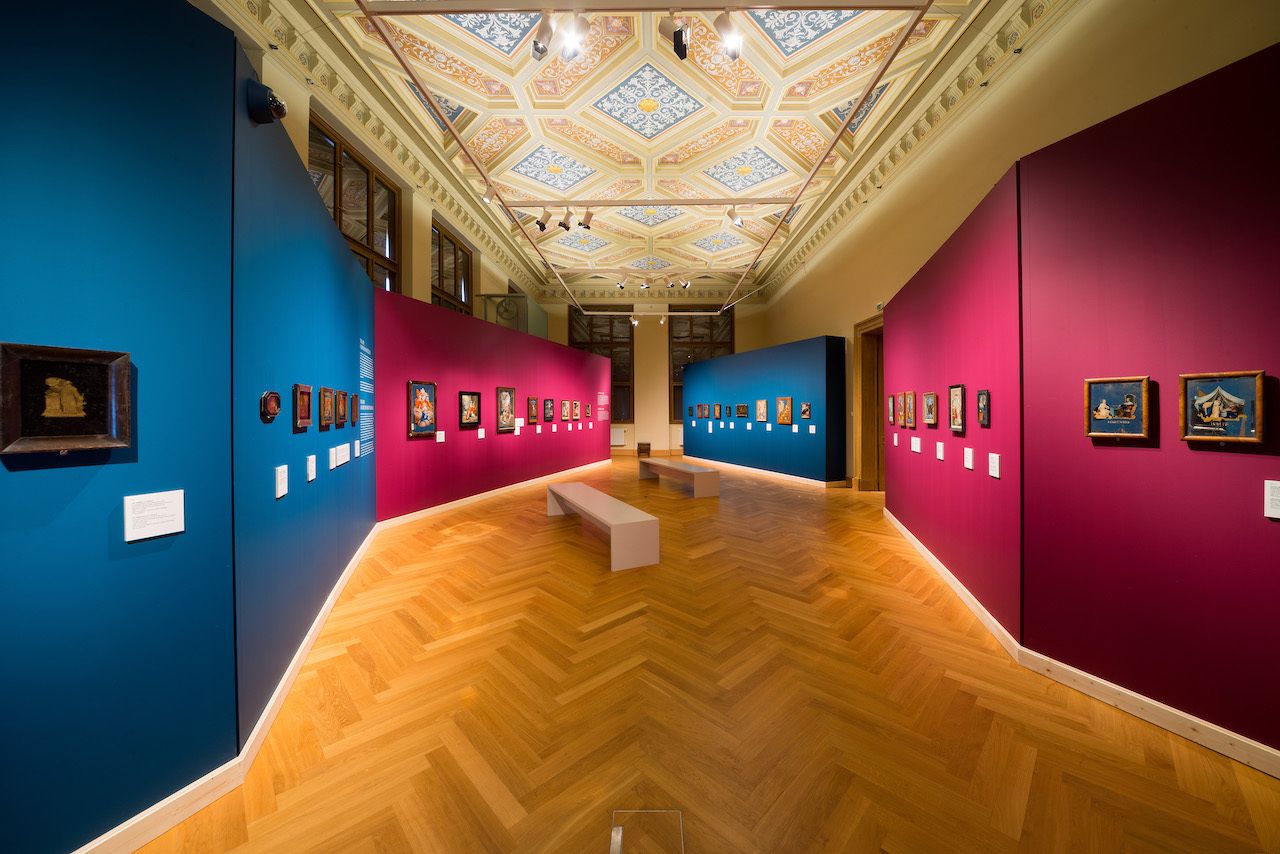 Museum of Decorative Arts — Having recently undergone an extensive overhaul, the Museum of Decorative Arts, located in the Jewish Quarter, now has three floors of exhibition space, as well as a pleasant garden, revamped shop, and a swish café-restaurant. Set inside a striking neo-renaissance building, the main draw is its cut glass exhibition, which is the most extensive in Europe and features Czech and international examples. But it also displays a broad assortment of ceramics and textiles, porcelain and jewelry, clocks and tapestries, graphics, toys, and photographs. In addition, the primary collection is often extended by works from other international museums in the shape of temporary exhibitions and loans. 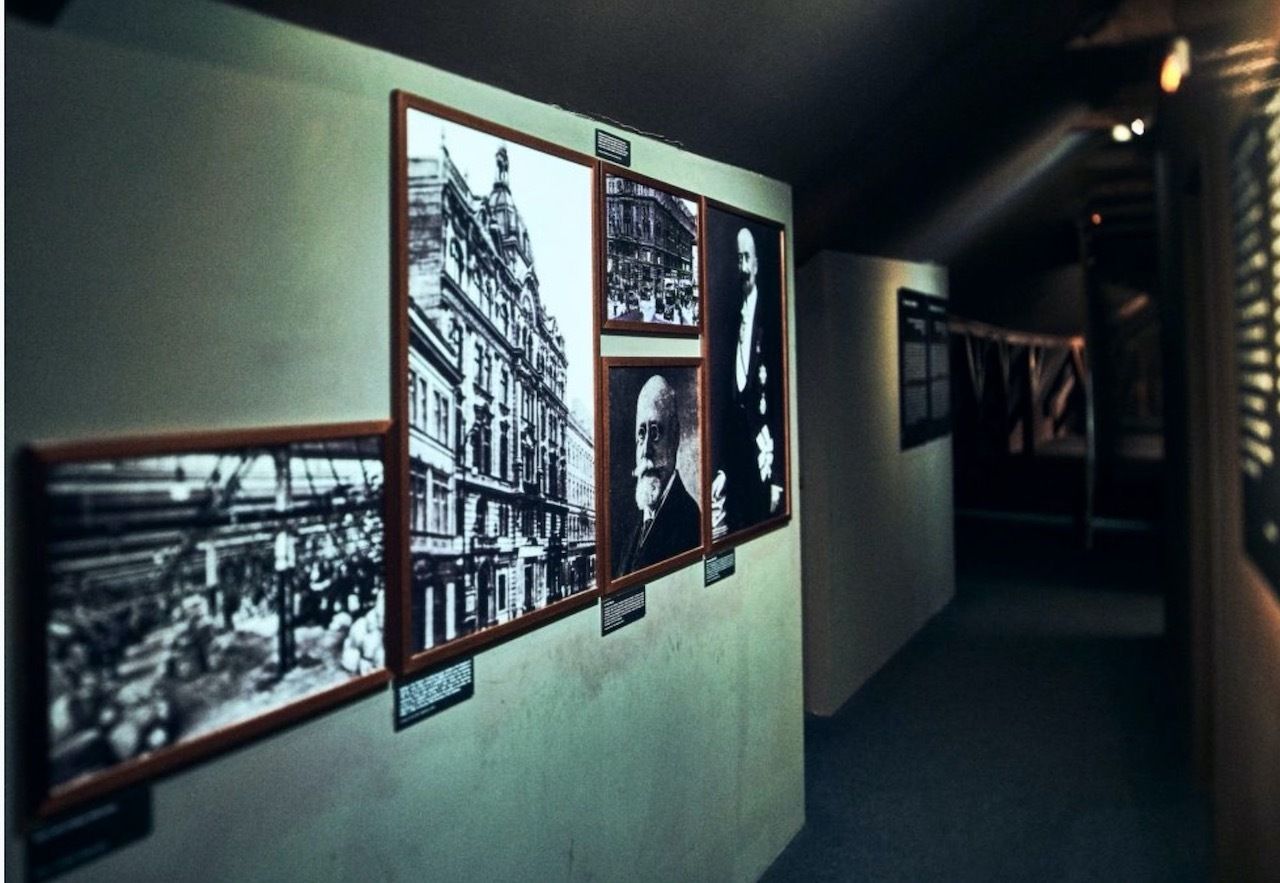 Kafka Museum — Despite the Czech capital producing many fine writers, none is better known than Franz Kafka, who is more or less synonymous with the city. In retrospect, it took a long time to get the Kafka Museum open (2005), given its subject’s stature, and it’s still fairly small. But what’s here is nonetheless insightful and interesting. The exhibition consists of two sections named “Existential Space” and “Imaginary Topography.” The first looks at the city’s influence on the writer and presents diaries and correspondence with family members, friends, and publishers. The second looks at how Kafka presented the city, which is often nameless in his works; for example, the anonymous cathedral in The Trial is generally reckoned to be St. Vitus Cathedral. 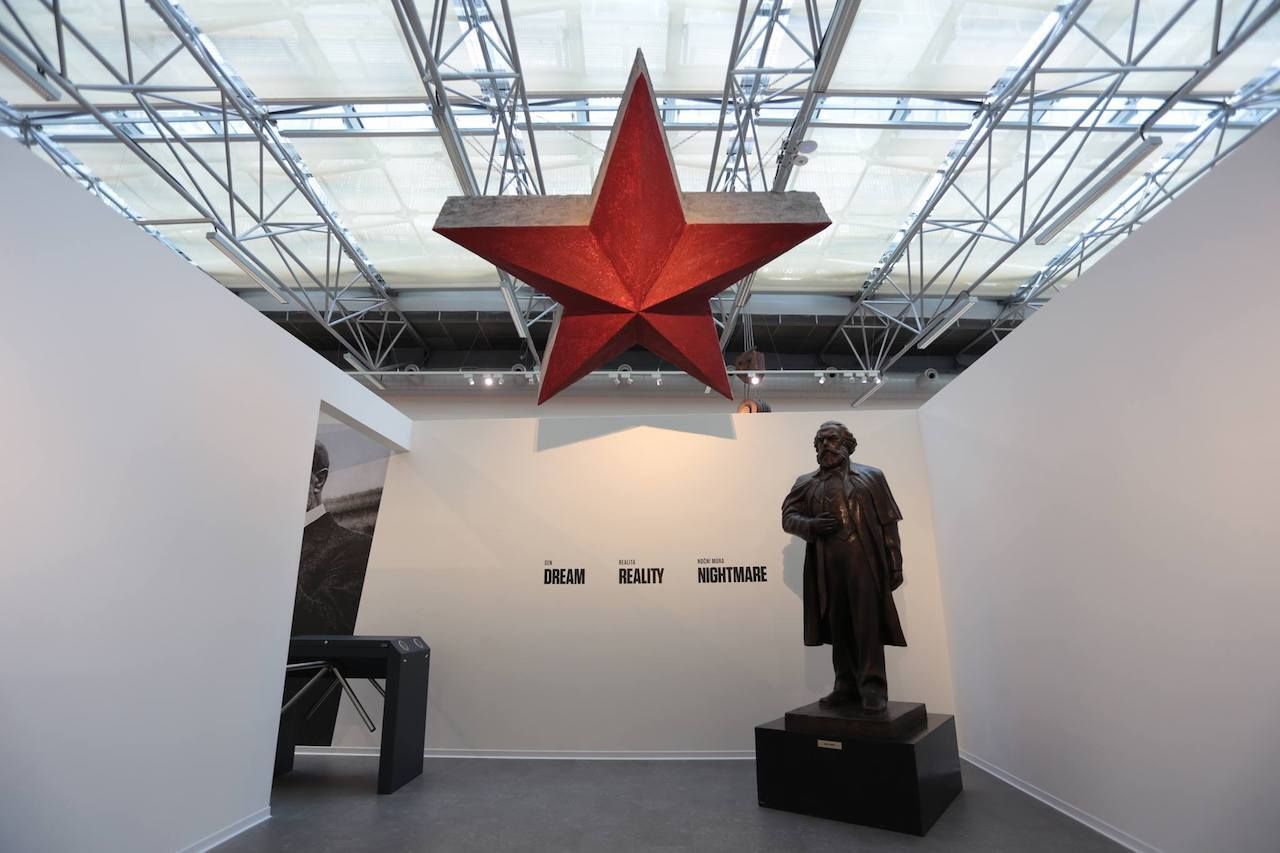 Museum of Communism — Located in the New Town, the Museum of Communism is the place to come and learn about the communist era of the Czech Republic, which lasted from 1948 right up to the Velvet Revolution in 1989. It houses a comprehensive collection of original artifacts that span multimedia (film, audio clips, and photographs), propaganda posters, historical documents, statues of Lenin, and military objects. Laid out chronologically and therefore easy to follow, it also includes a reconstructed school classroom, shop and workshop, and plenty of info about the pros and cons of the system: the sense of community and buoyant job market, but also the strategies of the secret police, the persecutions and show trials, and the lack of basic products. 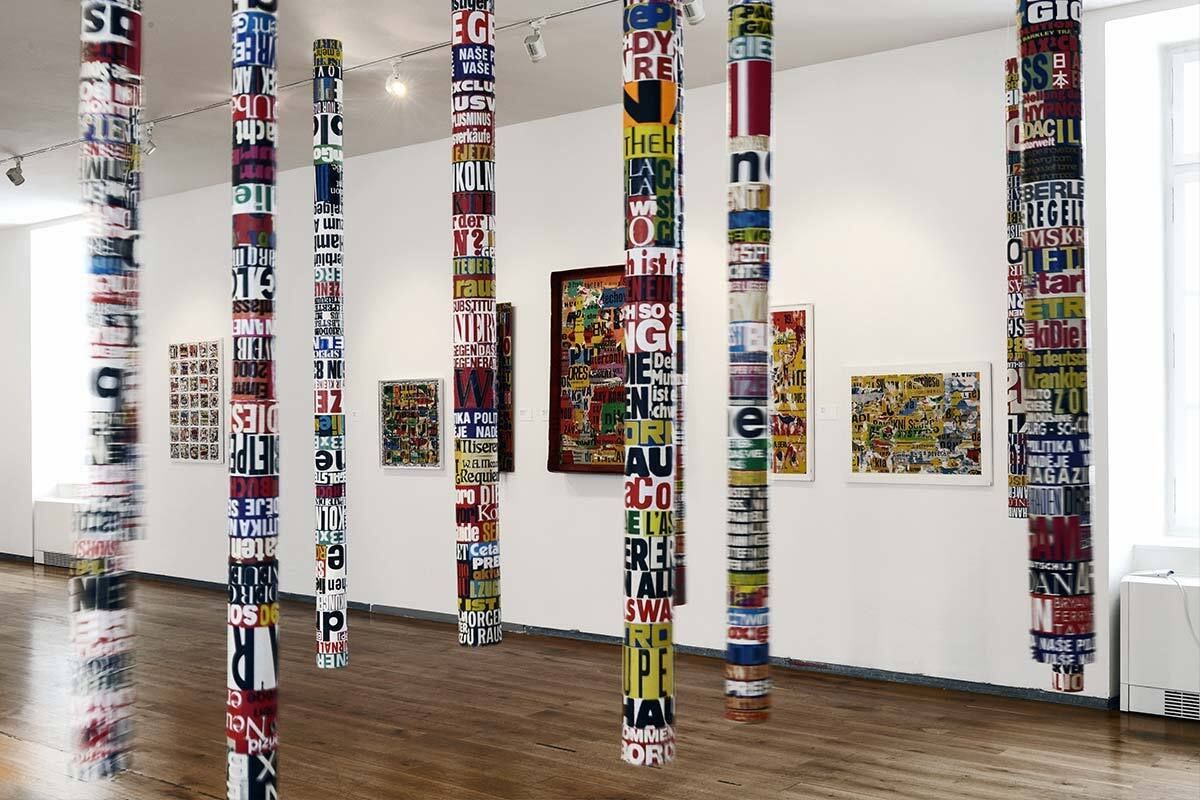 Kampa Museum — Located inside a former mill-house on the atmospheric artificial Kampa Island (close to Charles Bridge on the Malá Strana side), the quiet but comely Kampa Museum has been running since 2009. It’s today one of the prominent locations for contemporary Czech and central European contemporary art in the city. With an emphasis on emerging artists, it spans installations, sculpture, multimedia, paintings, film, and more. The main collection also features the most extensive collection of works by abstract Czech artist František Kupka, and there are regular temporary exhibitions (local and international) supported by a generous calendar of workshops, lectures, and events. 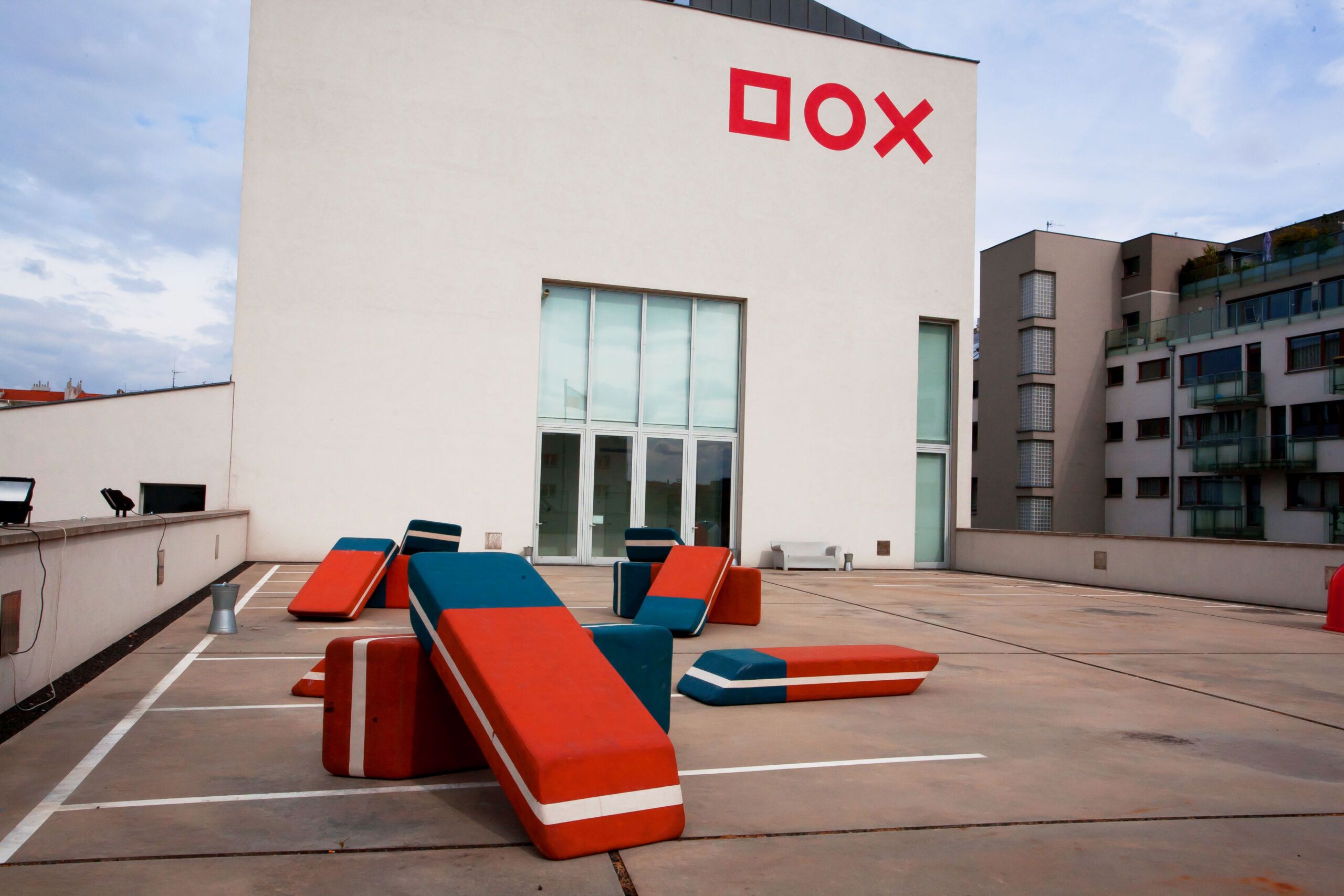 DOX — One of the venues that put the neighborhood of Holešovice on the city’s cultural map, DOX opened in 2008 as a dedicated space for cutting-edge contemporary art. Set inside a vast former factory building, exhibitions here are usually a mix of local and international artists and are often skewed toward the unconventional and thought-provoking. The venue also offers a busy events program, with lectures and film screenings, panel discussions and pop-up performances. There’s also an excellent café with a pleasant terrace, plus a design store and bookshop. 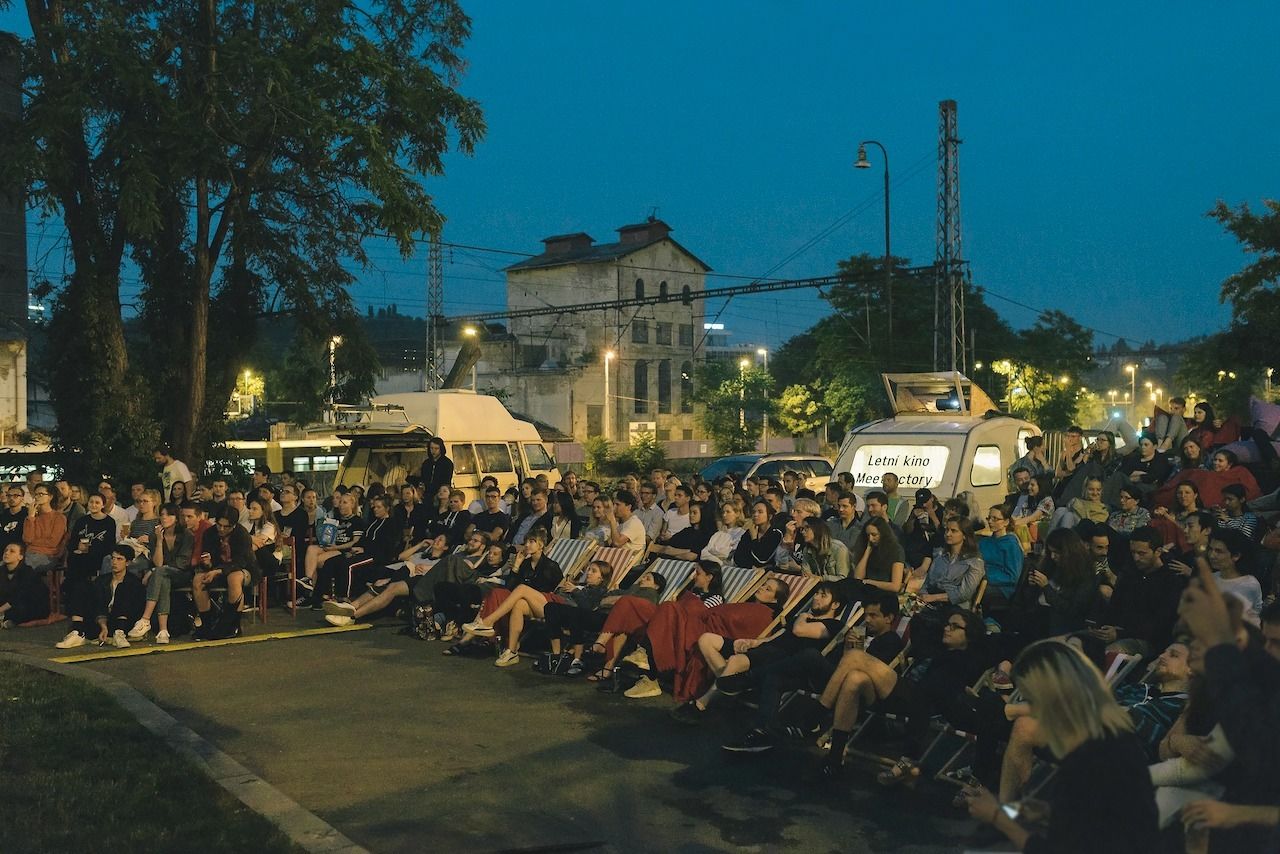 MeetFactory — Founded by internationally renowned Czech sculptor David Černý back in 2001, MeetFactory is a non-profit, contemporary art hub that has grown into one of the city’s most significant. Set inside a 1920s glasswork factory, it features a wide range of national and international interdisciplinary art curated via four distinctive in-house departments: Music, theater, gallery and an artist-in-residence program. The subsequent exhibitions are spread across three distinct spaces: the main gallery hosts the larger shows; the Kostka Gallery offers solo exhibitions by new and established artists; and the Wall gallery is mainly used for larger-scale works, including street art. MeetFactory also puts on highly popular live concerts and performances. 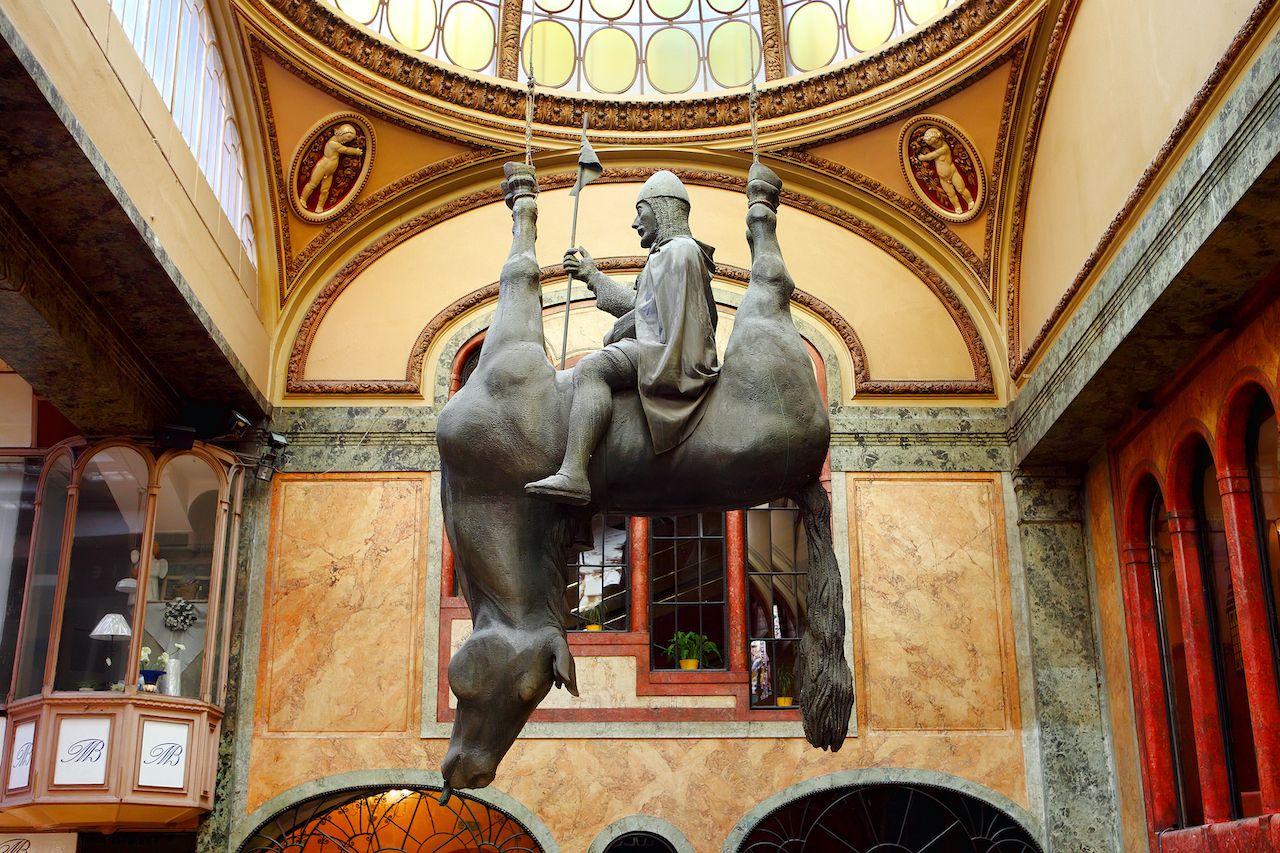 David Černý is one of the Czech Republic’s most acclaimed artists. Coming to prominence in the early 90s when he got himself arrested for painting a Soviet tank memorial pink, he has continued to create playful, mischievous, and controversial artworks, many of which are dotted around the city. Along with the pink tank, still seen at the Military Museum Lesany (20 kilometers south of Prague), look out for his upside-down Saint Wenceslas on a horse in the Lucerna Passage (Štěpánská 61 in the New Town). There’s also a work entitled “Piss” adjacent to the Franz Kafka Museum, which involved bronze figures urinating on a map of the Czech Republic; and giant, eerie, slot-faced babies that ‘crawl’ up the Žižkov Television Tower, but also appear outside the Kampa Museum.