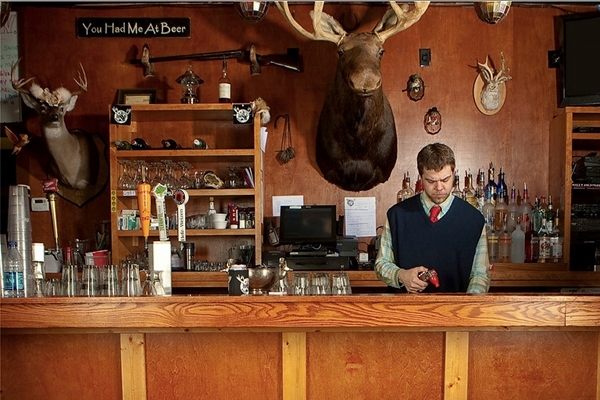 The bar at the Tattooed Moose. Photo and feature: Voodoo Tiki Bar

ARCHETYPAL dive bars are known for their cheap drinks, laissez faire décor and delightfully surly bartenders. Those in the city of Charleston, South Carolina, established in 1670, are no different. But can the dives of bigger cities like New York boast ocean views and southern hospitality? I don’t think so.

Whispers of secret alleyways leading to bars from older friends led me to discover the dives of Charleston. It’s a broke college student’s paradise, as I learned firsthand in my four years there, but the city has more than just PBR Tall Boys: here are my 10 favorite dive bars.

Many tourists and out-of-the-loop locals don’t know this place exists, since UDT doesn’t have a website or even a sign to alert patrons of the divey wonderland that lies down the dark King Street alleyway. The space covers the upstairs portion of Gilroy’s Pizza, with little room to sit, so you may have to get cozy.

Regulars come for the cheap drinks ($2 Bud Light), abundance of board games and nightly activities like Wednesday Beer Bingo and Sunday Karaoke. But be warned, selecting Mariah Carey over metal may get you booed off stage by your fellow singers, as I learned the day I dared to request Kelly Clarkson.

The bric-a-brac on the walls is what you expect from a classic dive: vintage neon beer signs, random posters, etc. And once I overcame UDT’s slight aroma of vomit, I quickly became a regular.

A longtime Upper King Street landmark, A.C.’s is a college crowd favorite. The once grungy interior received an extreme makeover a year ago, but the bar still sports the pool table, vintage beer signs and snarky staff. The $2.25 Beer of the Month is the best deal in town if you’re looking for something that isn’t Miller High Life, which they proudly list on their “champagne list.” Past Beers of the Month range from Red Stripe to Spaten to Molson and are selected randomly by the owners, so like Forrest Gump’s box of chocolates, “you never know what you’re gonna get.”

An unexpected feature of this dive bar is the Sunday morning brunch, complete with Bloody Mary’s and mimosas. But the menu items show off A.C.’s sense of humor, with dishes like the “white trash omelet” – complete with eggs, hash browns and cheese – or items inspired by Willy Wonka. The carb-aholic dishes are perfect for soaking up the remnants of a Saturday night bender. 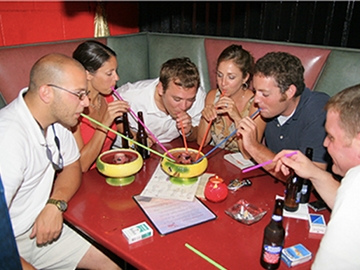 If you didn’t know any better, you might think you’d stumbled into a brothel when laying eyes on Voodoo’s red lights and velvet curtains. But it’s really more South Pacific kitsch; I didn’t expect to find a Trader Vic-style mai tai topped with an umbrella in a South Carolina strip mall.

Slide into a booth to share the bar’s signature drink, The Voodoo, with a friend (not advisable to try downing it all yourself). It’s a steep $13, but it’s meant to be split. It’s a bowl full of rum, brandy, vodka and bourbon, lit on fire, and sipped through a long neon-colored straw.

The folks behind Voodoo also opened this bar, housed in a former soul food restaurant, last year to rave reviews from local newspapers. They also have board games to keep you entertained as well as the signature mounted moose head above the bar. They’ve got plenty of beer to choose from, including $1.50 Pabst Blue Ribbon, a dive classic. The food’s good for a “dive”, ranging from the famous duck sandwich to hand cut fries with a garlic aioli.

Advertising itself as “Charleston’s best dive since 1955,” Big John’s Tavern was started by former New York Giant “Big John” Cannady. Rival Citadel cadets and College of Charleston students alike have passed through these doors at some point or another for the cheap drinks. With pitchers for $5 during happy hour, you can have one all to yourself. It’s the ideal place to start the night before wandering down to the more expensive Market area bars. 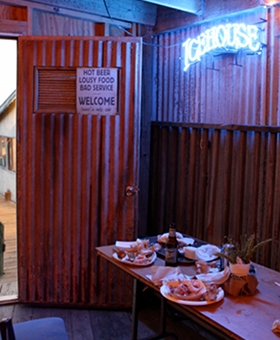 So maybe it’s not a bar, but it sure is a dive. Bowen’s is as unpretentious as a place can be: the unmarked gravel road leads you to a series of wooden shacks where you can enjoy the seafood fresh out of the ocean and a cold beer from the fridge. For a bite, try the fresh steamed oysters by the shovelful or fried seafood on paper plates.

Another hard-to-find bar, Burn’s Alley is located behind La Hacienda Mexican Restaurant on King Street. They stand by their motto, “If you can find us, you won’t forget us.” Take note of all the confiscated IDs above the bar while ordering your drink of choice. My personal favorite there is RJ Rockers Son of a Peach, which is made in nearby Spartanburg.

Live music nights are Fridays and Saturdays, and it’s a popular spot to watch College of Charleston and UNC basketball games. Happy hour specials include $1 off beer and $2 house liquors, and it’s not uncommon to see underage coeds sneaking in through “LaHa’s” back door.

Any place housed in a former Waffle House is sure to be a hit, right? The strip clubs and cemeteries of The Neck, the area between downtown and North Charleston, surround this Mexican restaurant, but it doesn’t take away from the appeal whatsoever. The margaritas are strong, even for a tequila lover like myself, often rendering me tipsy after only a few sips. To avoid passing out at the bar, you can order any of the delicious items from the menu, including beef tacos, pork tamales or menudo soup, made from beef stomach. 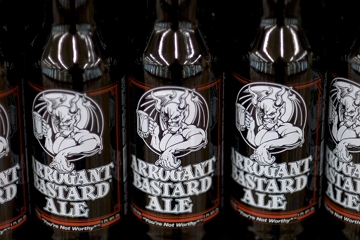 A favorite among fratties and sorority girls, CBW is known for the big screen television during sporting events as well as an odd assortment of games in the back, a la Chuck E Cheese for college kids. They charge a cover most nights, but with over 35 beers on tap, the cover is the furthest thing from my mind.

At CBW, you will find the basic beers, such as Blue Moon, Budweiser, Heineken, Yuengling and Pabst Blue Ribbon, as well as locally brewed Coast beer. Atlanta’s Sweetwater, Arrogant Bastard, Monkshine and Stone Double IPA are also on the list.

Known for its party deck overlooking Center Street on Folly Beach, Snapper Jack’s has three levels of drinking fun. The place is either a hit or a miss with tourists, who have been known to be turned away if the bartender doesn’t recognize their state’s driver’s license, which leaves more room for locals. They have an infamous “Snappy Hour” with plenty of cheap drinks, as well as a live band on the weekend. It also gets crowded when football games are on television.

How to piss off someone from Charleston

16 things you become addicted to in Charleston, SC

14 signs you were born and raised in Charleston

39 Signs you learned to drink in Charleston

How stupid can this South Carolina college be? The answer: Very