Bakso vendor is the most dangerous job on the island. The bakso cart is Bali’s version of the ice cream truck, serving up fish ball soup to five-year-olds in commuter traffic every afternoon. They push these little propane-filled carts up and down the potholed streets while motorbikes and work trucks rush by in crisscross chaos, dodging stray dogs, oncoming traffic, and (hopefully) their highly explodable pushcarts. All for a few afternoon bowls of 5-cent soup.

I wonder how these guys can afford to keep doing it. Oh yeah: poverty. Plus, it’s better than sitting on the curb playing chess all day.

The Balinese are the world’s best chess players. I sometimes theorize that this arises from a cultural ambition towards doing nothing. While Westerners strive to be busy and successful, the Balinese equate “success” with free time. Doing nothing. Playing chess.

The bakso bell rings out every afternoon, and today it sounds like “welcome home.” I’ve been gone too long. And I’m almost tempted. The bell rings out. The traffic rushes by. I wave to the bakso dude, but I do not buy a bowl of fish bowl soup. Nor will I ever again.

But it’s good to be home. 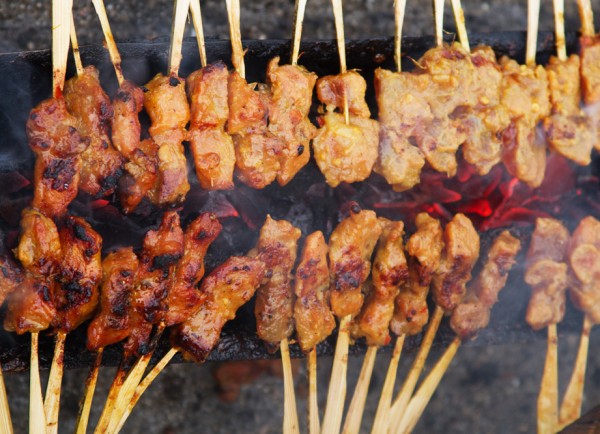 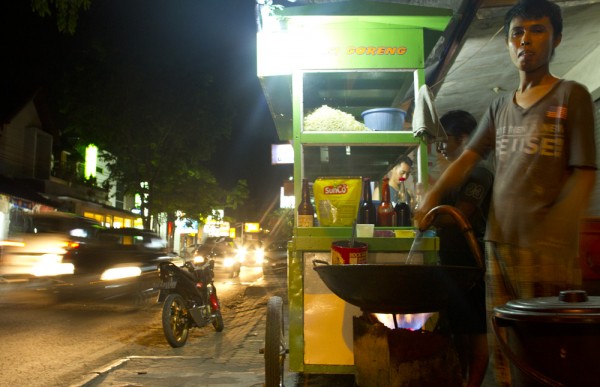 When I first moved to Bali, I thought I ought to embrace the bakso culture. It was an opportunity to practice my language skills, rub elbows with the locals, and toughen my immune system.

So, every afternoon I rushed out to meet the fish ball man with all the other local kids. I got giggled at, violently sick, and improved my language skills. I also learned that spicy fish bowl soup is gross, unhealthy, and a terrible way to ruin your appetite.

This was a lesson in itself. It’s always worthwhile to embrace a local culture on the ground floor.

These days, Bali is in the midst of an international food renaissance. When people ask what kind of food we eat here, I tell them: wood-fire pizza, gourmet hamburgers, fusion Mexican, pan-Asian travelogue-cuisine, and BBQ pork ribs. I never say fish ball soup. We eat like gods here. And gods don’t slurp noodles on the side of the road.

That’s what I thought, at least.

Having traveled the world in search of street foods abroad and “at home” in America, I return to my expat abode with a renewed interest in the local street meats I’d begun to ignore.

Now I pump my motorbike full of watered-down, vodka-bottle petrol and drive into the pulsing nightlife scene of Kuta Beach to find out what’s for dinner. In the street.

Kuta Beach is not Bali. I’d forgotten that, too. It’s been so long since I’ve been down here. I thought there would be a lot of street food along the main tourist drag, but all I find is expired Viagra and bootleg DVDs, belt buckle hawkers, and penis-shaped bottle openers. Novelty t-shirts and prostitutes. This is where Aussies, Euros, Russians, and everyone else come to power-shop the unlicensed markets, pop in for a quick street massage, and smash the three-story super clubs for a jungle-juice karaoke explosion.

After a few beers and commemorative kamikaze jungle juice shooters, this strikes me as a good thing. Bali’s street foods have not yet been twisted into some ridiculous tourist attraction down here in the disco Disney-sewer. I’ve come to the completely wrong place. And it makes me smile. It starts to rain and the street turns into a river of slime. Time to go. 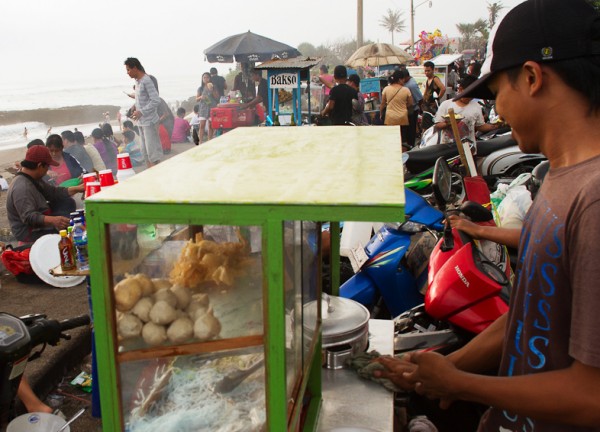 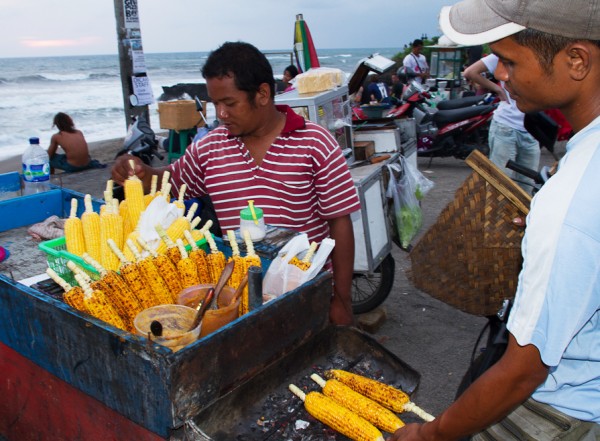 I jump back on my bike and head towards my village. Halfway home, I spot a crew of bakso pushers congregated on a street corner. I slow down to see if they’re perhaps sharing recipes, but of course they are playing chess. And doing nothing.

On the beach they sell sweet corn. Cooked over open coals and slathered in chili and butter sauce. A classic street food carnal delight. Both healthy and sinful. Cheap and delicious. It’s Sunday. Sunset o’clock. Everyone is here. Locals, expats, and tourist alike, sharing twilight on the beach. Splashing in the waves. Mingling amongst the smoke and scents of the street-cart collusion. Sweet corn. Pork satay. Candied crepes.

Fire and sunset. Sea and sand. A temple on the beach and motorbikes lined up outside. Hindu gods and hot meat. The Balinese have the most beautiful smiles on earth. And it’s good to be home.

The bakso man is ringing his bell, but he doesn’t seem concerned with sales. He’s eating satay and laughing with the man whose motorbike is stacked with balloons, gliders, beach balls, and fireworks. You know, for kids.

Locals, expats, and travelers all shuffle together at the shoreline, at the end of the day, at the turn of the tide. Sharing this casual, open-air meal as if they were all one family of man. You won’t find this in any fancy restaurant. Just here on the street.

I’d hoped to find some sort of symbolic bow to tie around this whole street food adventure, but I guess this sunset will suffice. Food for the common man on the island of the gods. Good enough for me.

Tagged
Travel Ambassadors
What did you think of this story?
Meh
Good
Awesome