Outdoor seating at restaurants and bars used to be a treat. Now, eating and drinking outside is just about the only way to stay (relatively) safe.

There’s just one major problem: Restaurant and bar bathrooms are all still inside.

Restaurants and bars across the United States have moved dining tables to the streets and parking lots. Cocktails and beer are now sold to-go, and sipping your drink while walking is about as common for some as bellying up to the bar once was. But stay outside long enough — especially after a few drinks — and you’re bound to need to pee. In New York City, so many people were peeing on the streets in recent weeks that the New York Post rechristened the Big Apple “the Big Toilet.” Roadtrippers who could once rely on pit stops at fast-food restaurants are finding limited toilets or outright closures.

America, frankly, is not designed for people who need to pee.

Restroom access has long been a problem in the US. A lack of publicly maintained restrooms means that ubiquitous businesses like Starbucks are the toilet gatekeepers. This has led to some blatant examples of discrimination. Public restrooms aren’t enjoyable and can be costly to make and maintain, but they are necessary — especially when road trips are the safest way to travel and outside is the only place to go. That’s never been more clear than during a global pandemic that shut down the private businesses people were previously forced to rely on.

The US has tried to solve the problem in the past. An article by Peter Baldwin in the Journal of Social History highlights how the years between 1869 and 1932 were boom times for public bathrooms. The country was still figuring out where it stood on government responsibility versus what private businesses should provide. The government at the time believed its duty was to “protect privacy, encourage personal care, and hence refine the inner character of the citizen,” Baldwin writes, and cities built “comfort stations” near public squares. Privately owned businesses, in contrast, exploited people’s bathroom needs to draw people in for a sale.

The public lost. Department stores and hotels provided affluent shoppers with fancier, more private bathrooms. Those who couldn’t afford to shop were left out. You can draw a direct line from the classist choices of a century ago to today. In New York City, the only reliable place to find a bathroom in normal times is at a bar, since anywhere that sells alcohol must also have a bathroom. Toilet-finding apps like Flush were once indispensable for travelers looking for businesses with bathrooms. Now we’re left with few private options and even fewer public ones. 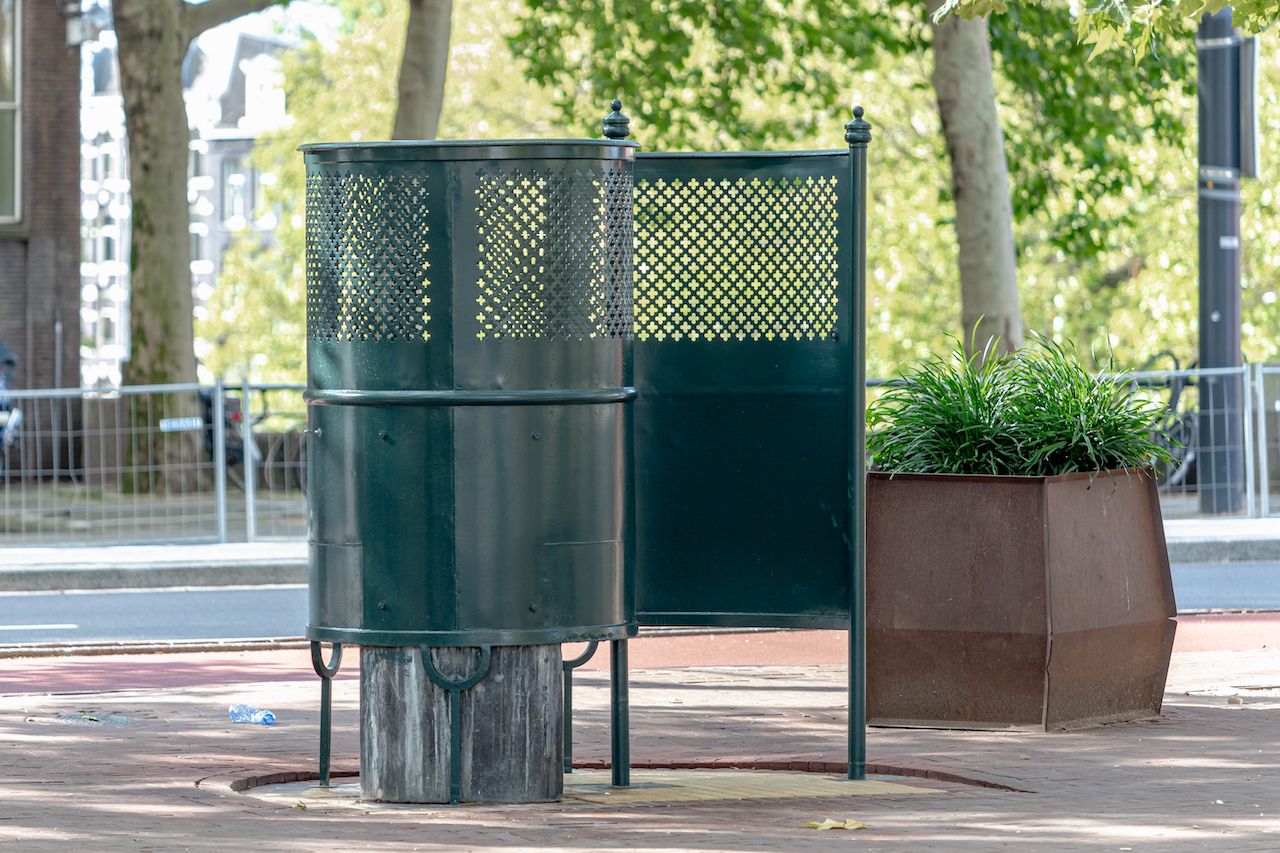 Other countries like the Netherlands, Germany, and France have found solutions. France’s history with public restrooms is longer than the US’s history without them. Paris built public urinals in the early 19th century called colonnes vespasiennes. They weren’t perfect (traditional urinals are only useful for about half of the population), but they did reduce the amount of piss flowing on the streets. Today, people in French cities have the option of open-air urinals called pissoirs and full, self-cleaning public restroom stalls called sanisettes. The latter have a locked door and can be used for up to 15 minutes, and many are free to use in Paris.

These restroom options aren’t exactly comfortable for people used to the privacy of a restaurant or bar bathroom. Yet when drinking outside is part of the culture, the public options are a relief. I found this true firsthand last summer while drinking wine and eating bread on the side of Canal Saint-Martin in the 10th arrondissement. Nothing will make you rethink your aversion to public toilets like a full bladder.

Drinking outside has become a forced part of American culture too now that it’s the only option. Yet we lack the infrastructure to make this a sanitary activity. 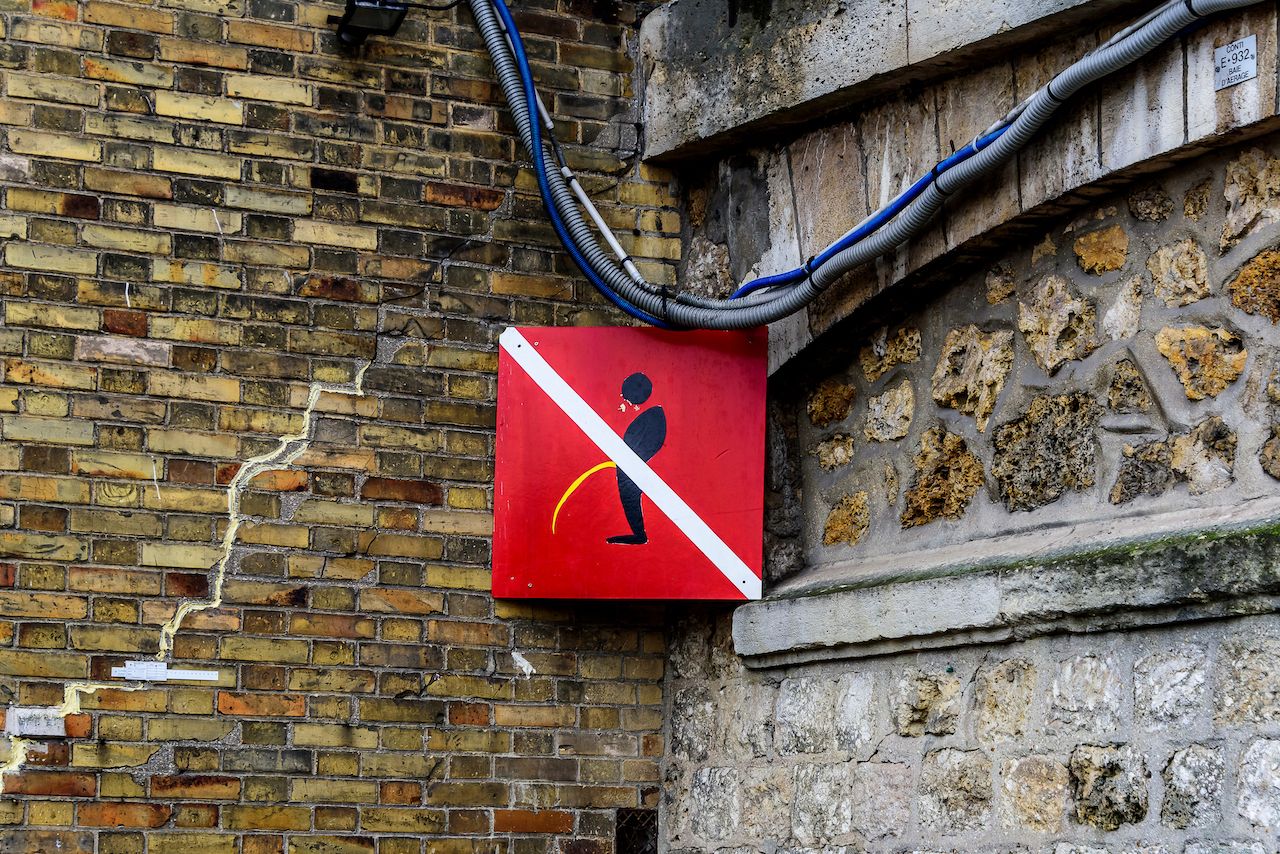 People are going to have to pee. There’s no getting around that. Without public restrooms or open businesses, people are confined to a small radius around their home if they want to avoid peeing in public (and risk getting fined, or worse). This is an extra burden on the homeless and people with medical conditions.

It doesn’t have to be this way. The lack of public toilets is one of the many issues that the coronavirus has shined a bright light on. It shouldn’t be something that returns to the old normal. Still, the chances of local governments in the US funding public bathrooms are low, whether that be male urinals, female urinals like the Lapee, or self-cleaning private bathrooms like those in France.

As we road trip around the country and sip on our to-go drinks around town, it’s worth thinking about how the country could be a cleaner, more equitable place with more public restroom options. The smell of urine baking in the summer sun is reason enough to dream of better days. Until then, people away from their homes in the US are left holding it.

Food + DrinkThe TSA Has a New Rule for Snacks in Carry-Ons. Here’s Why.
Tagged
COVID-19 Restaurants + Bars United States
What did you think of this story?
Meh
Good
Awesome