If the Baltic nation of Latvia is not high on your travel list, it should be. After all, the capital city of Riga is an affordable hub of Art Nouveau, sometimes nicknamed the “Paris of the East.” But even with this promising moniker, the best of the nation is to be found in the small towns dotting the heavily forested countryside. Beyond Riga’s city limits is where you’ll find the lesser-known but visit-worthy spots like beautiful Kuldīga, historic Cēsis, and the spa haven of Jūrmala. Here is where to go beyond Riga if you truly want to learn about Latvian culture and its place in the Baltic region. 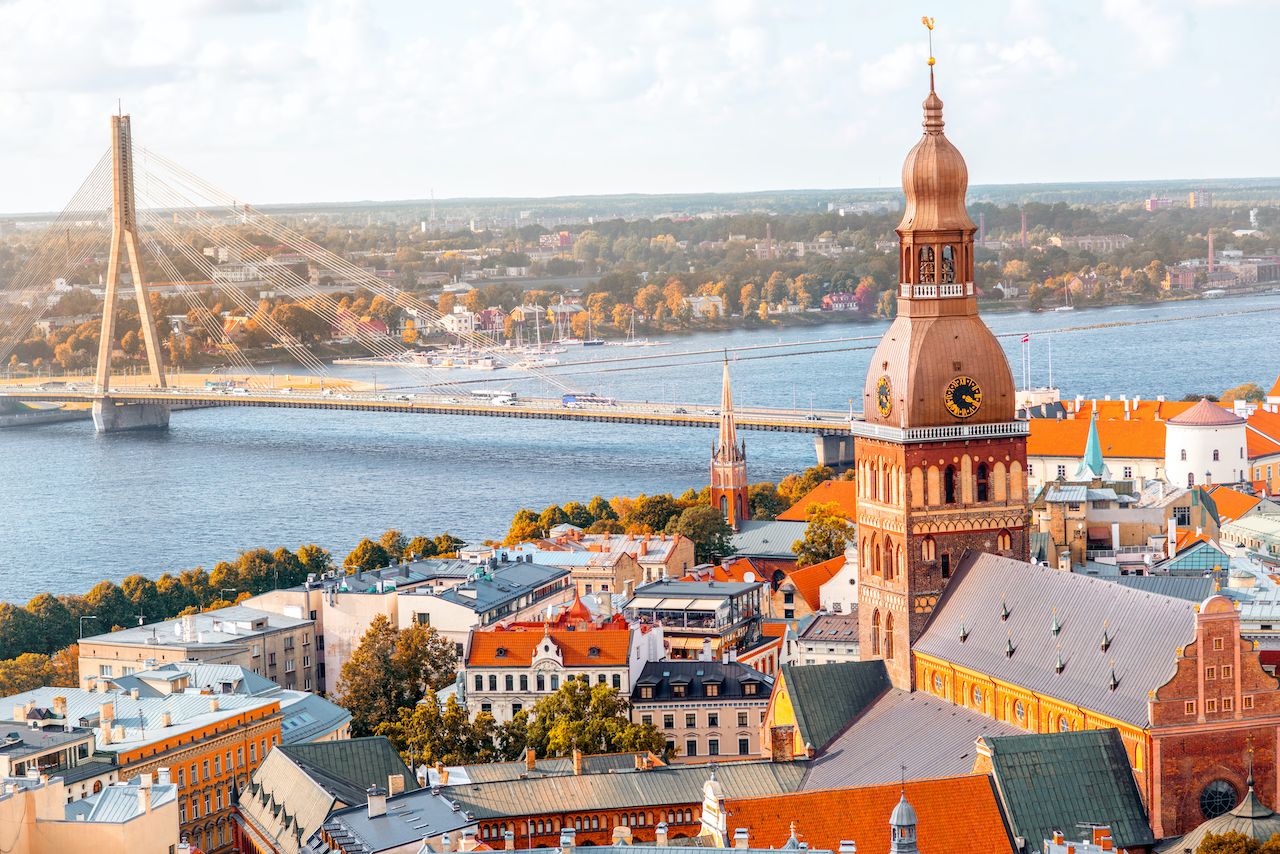 If traveling by air, you’ll likely fly into Riga International Airport, the Baltic’s main international air hub. Train service from Riga to Kuldīga, Cēsis, and Jūrmala is readily available with departures happening throughout the day. If you’re after peace of mind, purchase tickets in advance, though walk-ups are generally available and even if one train or bus is full, there will be another one shortly. The native tongue is Latvian, though you’ll also hear Russian spoken quite frequently and English should get you by just fine in restaurants and other social spots. Bring warm clothes, particularly if traveling in winter or if you plan to be out at night. 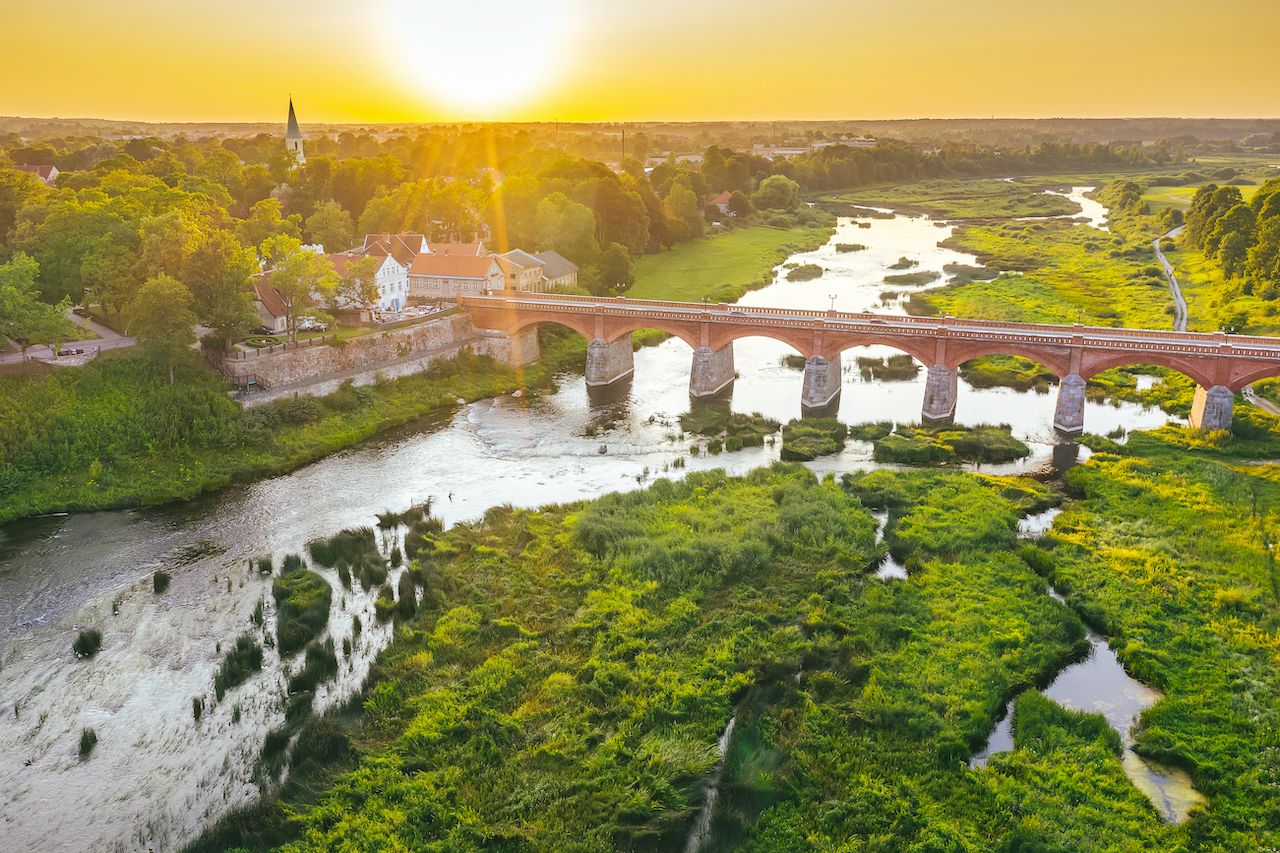 Kuldīga is a small municipality in western Latvia. With just over 13,000 residents, it seems as though Kuldīga shouldn’t have as much cool stuff to do as it does. For starters, it’s home to the widest waterfall in all of Europe, Venta Rapid Waterfall, which stretches over 800 feet across the Venta River valley. Some 100,000 visitors a year descend on the pretty banks of the Venta River and on the old brick bridge in Kuldīga, which is the also longest of its kind in Europe and dates back to the 1800s. 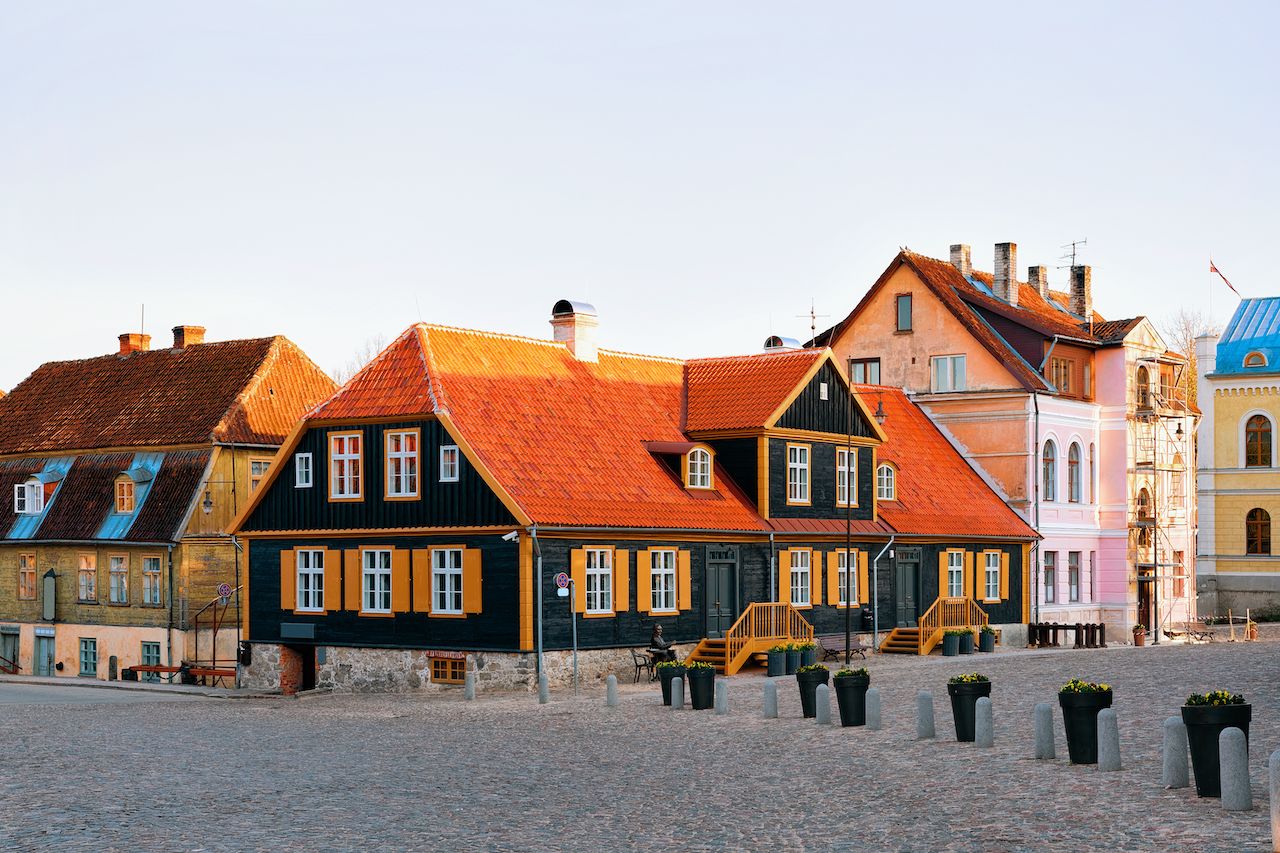 Kuldīga’s old town is a must-see. Numerous European feature films have even been shot there thanks to the gorgeous, historic buildings and and small roads lined with traditional Baltic squares and architecture. It’s also on the list for consideration to be a specially designated UNESCO World Heritage site. The townspeople take the preservation of history very seriously; Kuldīga has a special government-funded preservation center where homeowners can learn how to properly mend their intricate homes with help from master craftsmen. This is vitally important because the old town has over 400 wooden houses, some that date as far back as the 1700s.

Note that Kuldīga’s food and beverage scene is developing a reputation for creativity. Grab a delicious cup of artisan coffee from Curonia Coffee Roasters. Additionally, for a truly decadent breakfast, head to Goldingen Room for its signature oatmeal and ice cream dish. Also check out Bangert’s restaurant, conveniently located just steps from the River Venta and the waterfall. The dark rye bread, beet carpaccio, and Pelči trout are all excellent lunch or dinner choices. 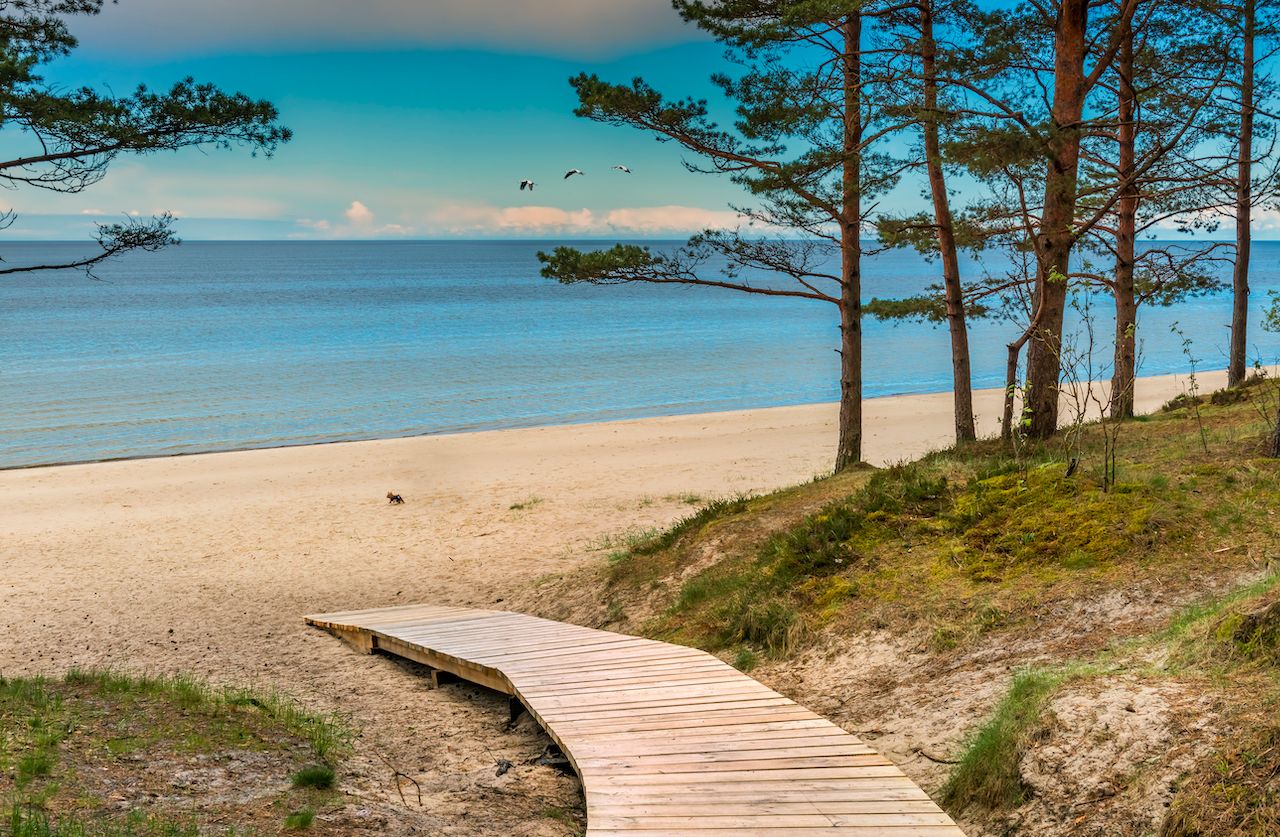 The spa retreat of Jūrmala is just a quick 20-minute drive or a one-euro (less than $2) train ride away from Riga. Visitors have long been drawn to this Baltic seaside escape of golden sand, healing waters, and pine forests with blueberry carpet. During the Soviet occupation, this region was popular with high-ranking communist party officials and was one of the most visited vacation spots in the entire Soviet Union. 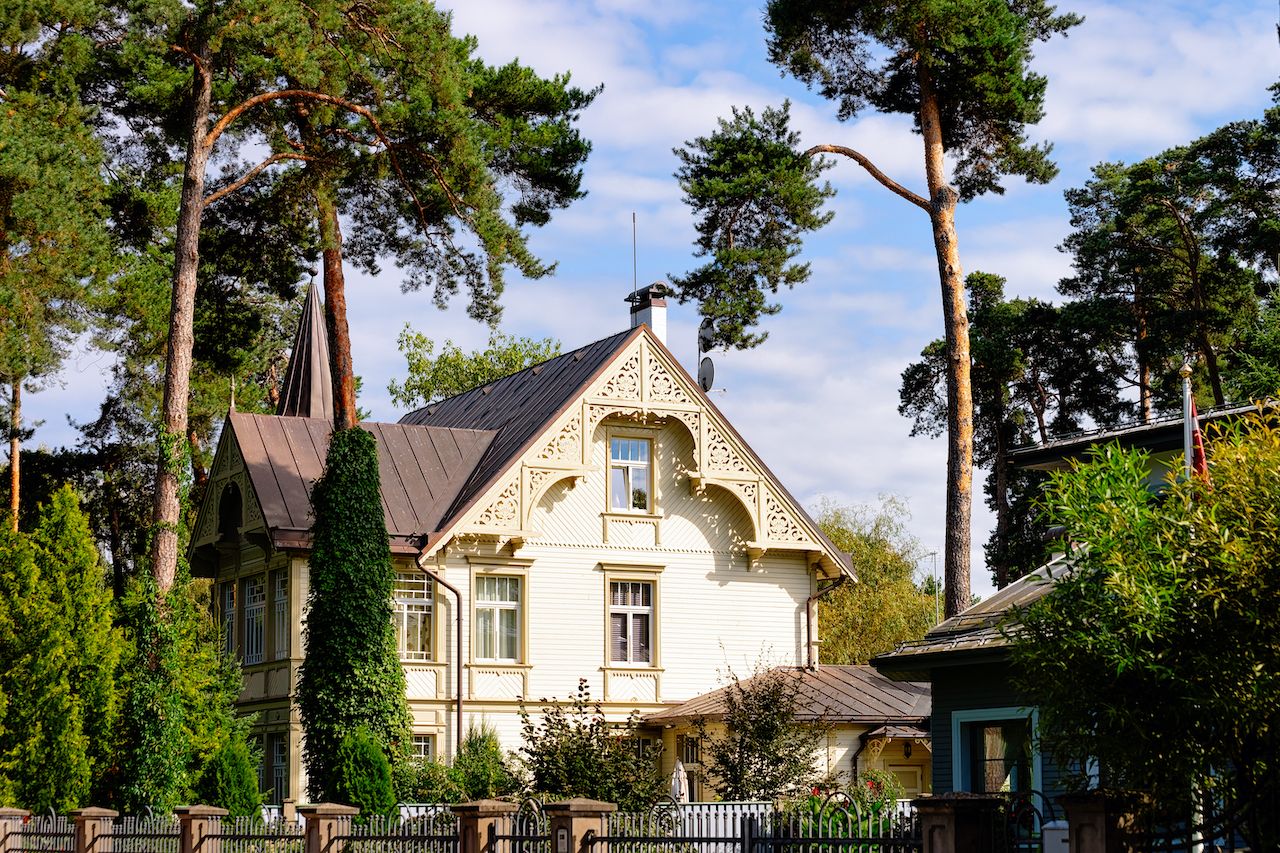 Located between the Gulf of Riga and the Lielupe River, Jūrmala is a picturesque, narrow town. It’s home to the protected Ragakapa Nature Park, a prime spot for hiking on the winding boardwalks in the forest. There’s also an open-air museum that honors the area’s history of fishing and seafaring, as well as the Great Kemeri Bog in Kemeri National Park. Jūrmala is also a great place for those who enjoy beautiful architecture, with hundreds of historic wooden summer villas decorated with ornate wood carvings in the area. Many have been painstakingly restored while others are still waiting for their facelift. But Jūrmala’s best-known attraction has always been its spas. There are numerous options to choose from, but we recommend the Hotel Jūrmala Spa. The amber massage is the most unique offering there and pays homage to the amber that’s known to wash up on Baltic shores.

Visitors should also make a point to stroll down the main street of Jomas, pop into a cafe, and people watch. The name Jūrmala even translates to the word “seaside,” a fitting label for such a lovely resort area with two blue flag beaches. 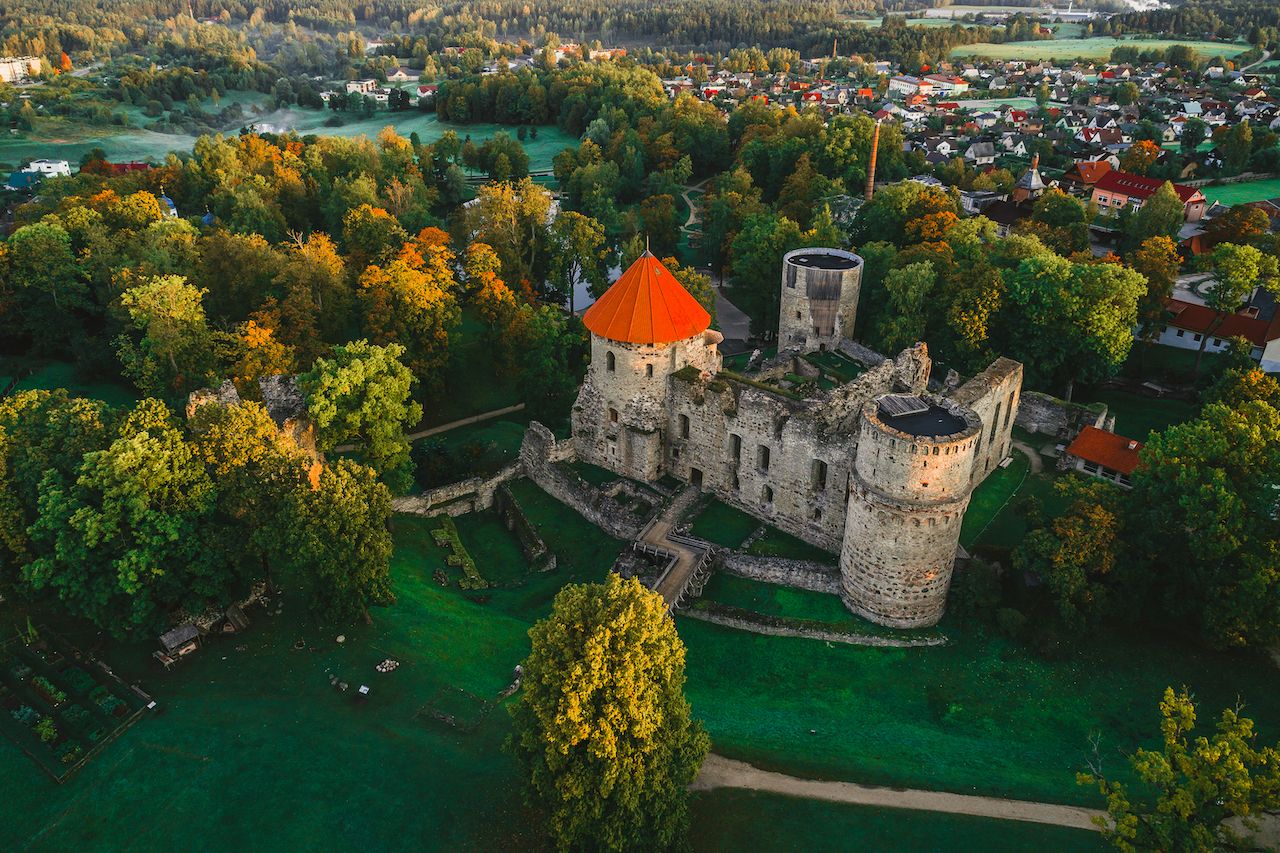 Northeastern Latvia’s small town of Cēsis is home to one of the best-preserved castles in the country. With medieval roots, this fortress — known as the Cēsis Castle — has been famously destroyed and rebuilt numerous times. These days, travelers can wander the garden and grounds. Be sure to experience the traditional candlelight climb up the Western Tower. 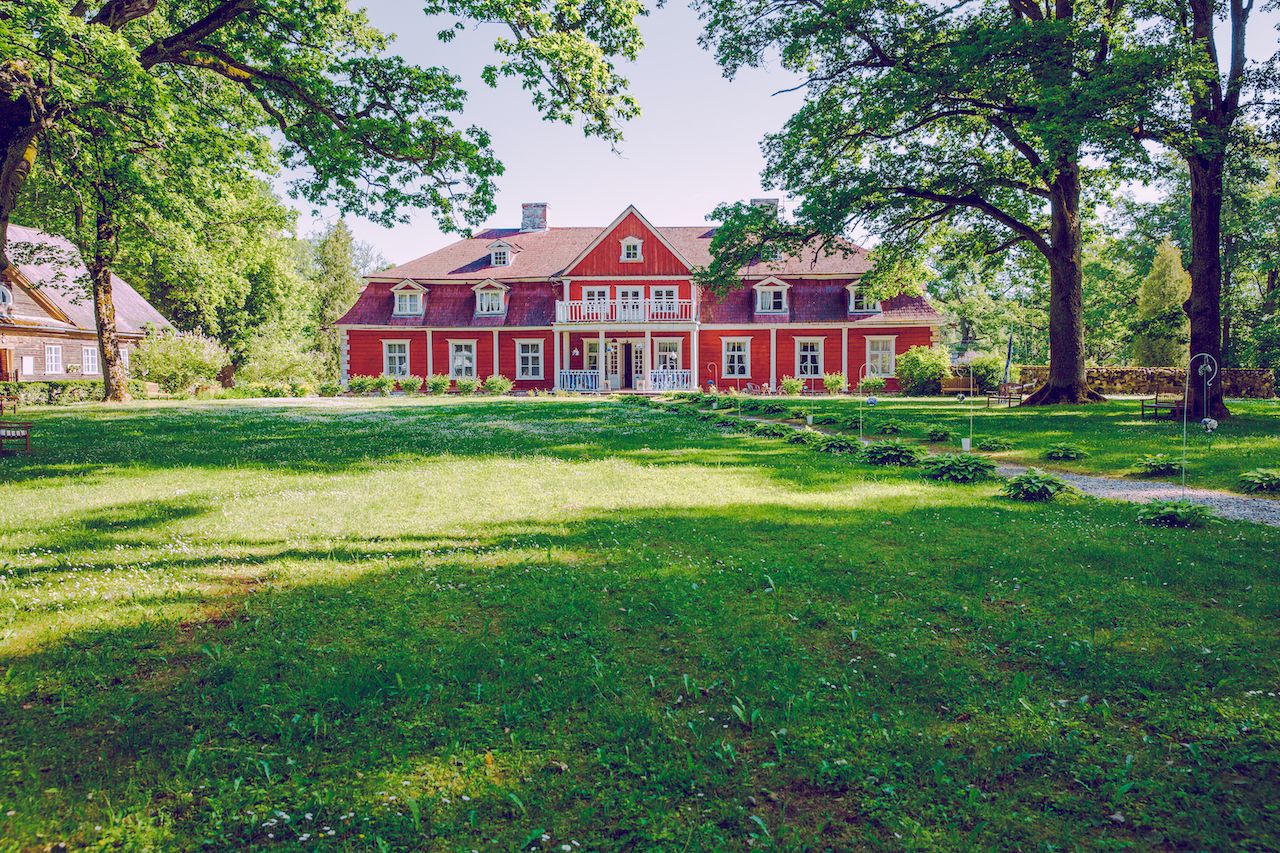 Cēsis also has a concert hall and a large annual arts festival, which makes it the musical and cultural heart of Latvia’s Vidzeme region. Nearby Gauja National Park is the largest and oldest of the Latvian national parks. Cliffs, river views, and dense forest surround the park’s numerous hiking trails. Ungurmuiža is another spot you shouldn’t pass on; it happens to be the only preserved wooden Baroque manor house in the entire country.

Art + Architecture6 Castles You Should Check Out on Your Trip To Latvia
Tagged
Travel Trip Planning Latvia
What did you think of this story?
Meh
Good
Awesome

6 Castles You Should Check Out on Your Trip To Latvia

How To Bobsled Like a Professional: Riga's Sigulda Bobsleigh Track

Traveling in Putin’s Shadow: A Visit To Riga, Latvia

How To Piss Off a Latvian