Sitting at the fulcrum of a half-circle table and surrounded by eight onlookers, a magician pushed three cups around on the table. We had watched him place a ball under one cup, but when he lifted the cup with the ball under it, a lemon came out. He reset, and when he lifted the cups this time, lemons larger than the cups themselves fell out and rolled around the table.

I’ve always been a sucker for sleight of hand, but this brief moment during the Speakeasy Magick show at The Club Car in New York City’s McKittrick Hotel felt like straight magic.

Magic shows are in the class of experiences that sound far more impressive in the moment. Like a joke, you really have to be there. Also like a joke, you think about a good magic show long after it’s over.

At Speakeasy Magick, magic is for adults — even jaded New Yorkers who think they’re above tricks and idle entertainment. It’s a throwback to when magic shows were wildly popular, joining other adult-focused magic venues across the country like Magic and Wine and the famed Magic Castle in California, and Chicago Magic Lounge and the Magic Penthouse in Chicago.

“Magic is an ancient form of entertainment,” says Cesar Hawas, the McKittrick Hotel’s special envoy. “To that end, I really do think it transcends ‘trendiness’ and is really all about the timeless and universal experience of watching something that completely subverts logic and blows your mind happen right in front of your eyes.”

Magic is, once again, prime entertainment in the big city.

Entertainment that’s waxed and waned in popularity but never disappeared 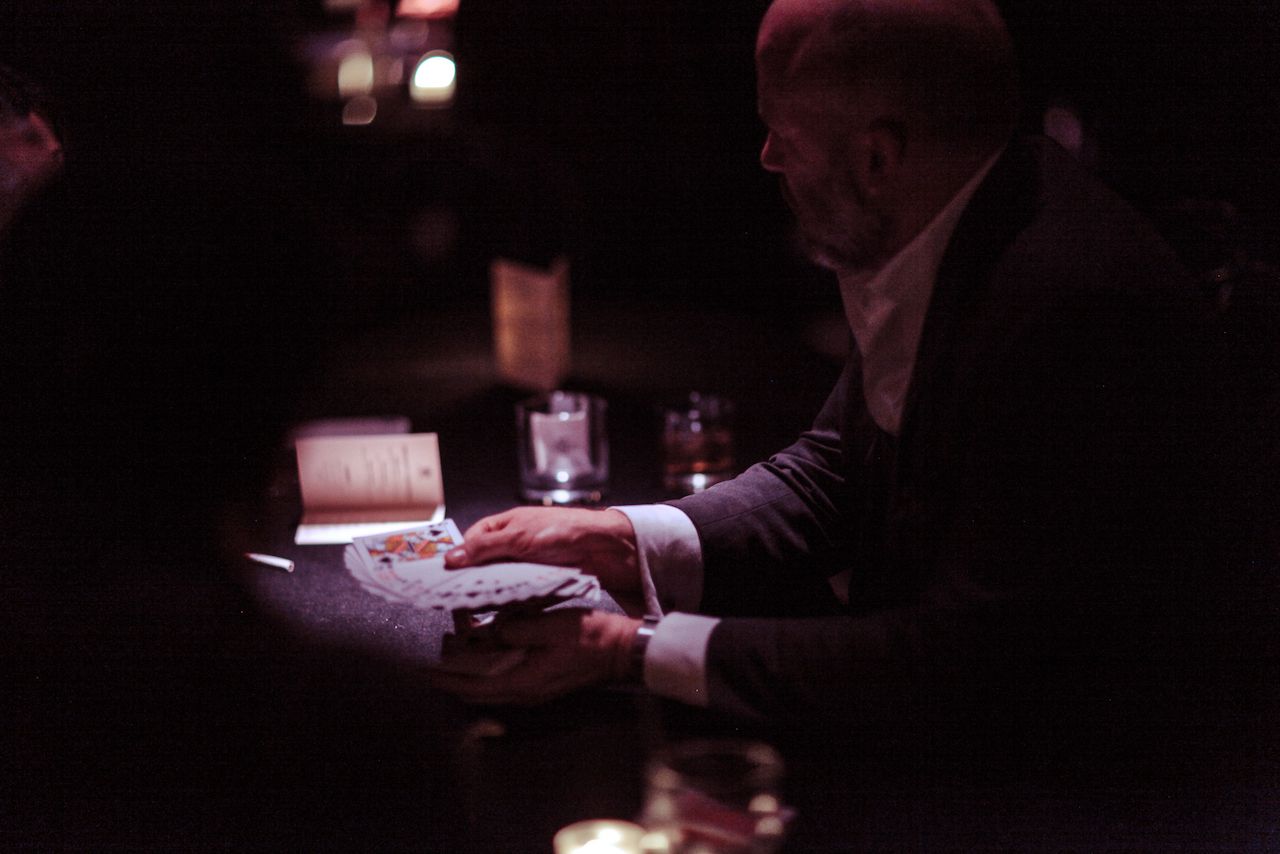 Modern magic shows date back to 1845. That was the year that Jean Eugene Robert Houdin, a natural showman with a naturally sing-songy name, started a run of shows in a Paris theater. He levitated his assistants and did other big-stage acts you’d see during a modern Las Vegas show. He also got close to his audience with coins and cards, daring people to confront the illusions face to face.

Houdin represented a hard switch from how magic and sleight of hand were perceived earlier in human history (witch trials, anyone?). He’s perhaps most familiar among even the magic-averse as the inspiration behind Erik Weiss’ stage name, Harry Houdini.

Magic was king in the early 1900s and through the 1920s in large part thanks to Houdini. He regularly performed death-defying acts like getting out of a water tank while shackled, and did special challenges like the time he escaped the carcass of an embalmed whale in Boston that had been sewn back together. Other magicians flourished, as well, like Houdini’s more popular rival at the time, Howard Thurston. Then there was P.T. Selbit, who was the first magician to saw a woman in half instead of a man, forever changing the magician-assistant dynamic.

The end of the act for magic as entertainment came in the late 1920s. Houdini died on Halloween in 1926, and the talking picture show came about in 1927. Then the Great Depression started, and magic acts disappeared along with the glitz and glam of the Jazz Age.

Magic waxed and waned in popularity in post-Great Depression America. After World War II, a new style of magic done close to the audience was pioneered in Chicago. It dropped in popularity again in the 1970s, then David Copperfield rose to fame in the late ‘70s and ‘80s to become the most famous (and most commercially successful) magician ever.

Perhaps the most infamous fall in the popularity of magic was in 1997, yet it was also in part responsible for the close-up acts performed in venues today. From 1997 to 1999, a TV show called Breaking the Magician’s Code aired nationally on Fox and exposed how many of the famous classic stage illusions are done. A masked magician, later revealed as Val Valentino, exposed tricks like how to catch a bullet, saw a woman in half, levitate a woman, and pull a bunny out of a hat. The four episodes can, as of this writing, be binged on Netflix.

After that fall came the rise once again of close-up magic from the likes of (Mindfreak) Criss Angel, David Blaine, and others who are willing to learn how to eat razors then pull them out of their belly buttons.

Close-up magic is big entertainment in the Big Apple 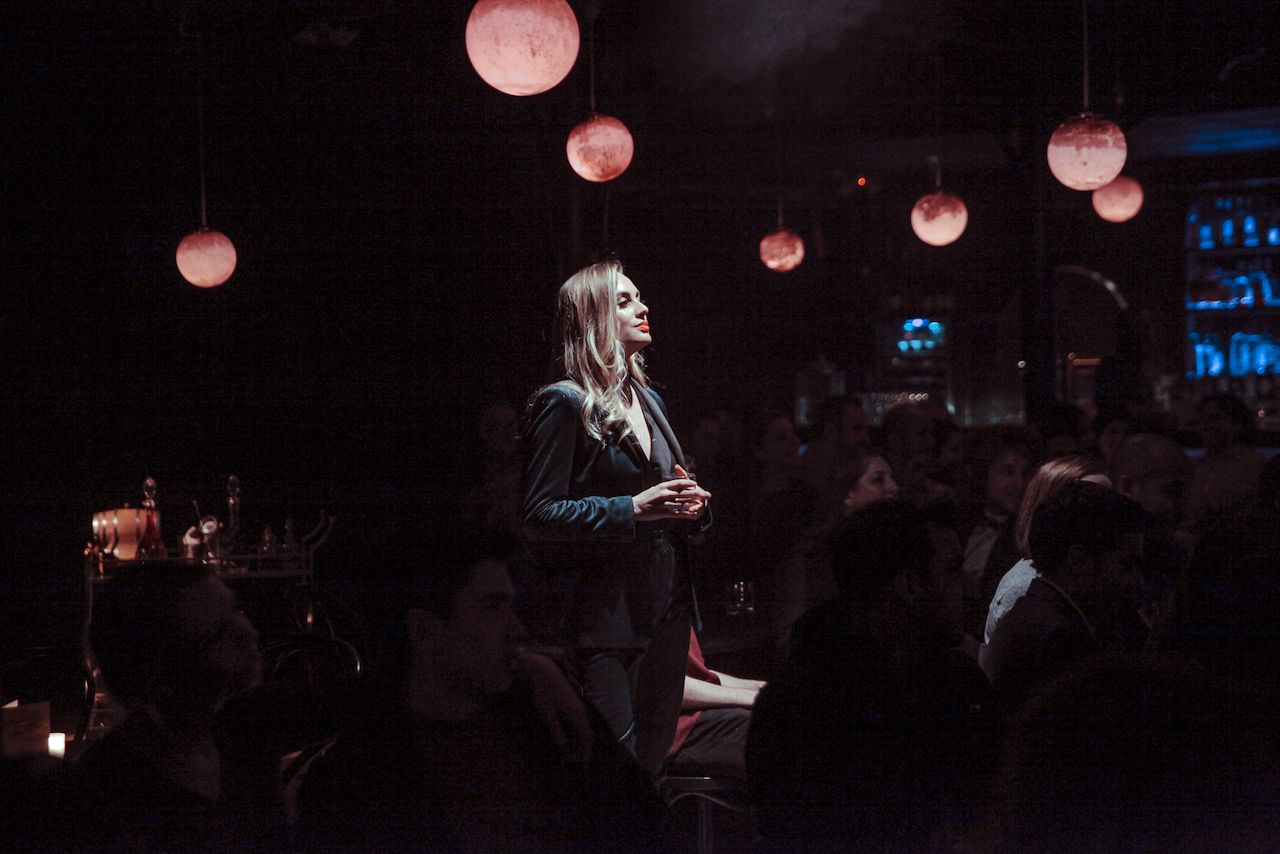 At The Club Car in The McKittrick, a hazy smoke fills the air. A roving bar cart does laps around the room, dishing out bespoke cocktails to guests as they keep their eyes on the magicians. A lone piano player sets the mood with jaunty background tunes. Host Todd Robbins primes the audience with corny but lovable jokes as he performs tricks like ripping a newspaper to bits only to have it all come back together again with the help of some fire.

“We are all really big fans of magic here, and it just really made sense,” Hawas says. “Speakeasy Magick actually came together pretty quickly. We’ve known Todd Robbins for a while and had been trying to figure out what kind of experience we could collaborate on. This just fell into place with Todd curating a roster of the best magicians that the NYC scene has to offer.”

The magic show is a smart follow-up to the McKittrick’s wildly popular immersive theater show Sleep No More, where audience members walk around the hotel in masks watching a disturbing play loosely based on Macbeth. Opened in 2011 and still going strong, it was exactly the kind of quirky experience bored locals are always looking for to keep date night interesting. Speakeasy Magick offers this same crowd another more affordable and slightly less avante-garde option.

When it comes to the magical acts, those at Speakeasy Magick and others eschew the types of big-box tricks exposed in Breaking the Magician’s Code. A group of NYC magicians instead rotate from table to table in The Club Car. Each performs tricks feet away from a small group for a set amount of time, and then moves to the next table. Some read the minds of people who want to travel, pulling up destination planning on their phone several long minutes before the person coughs up where they want to go. Others make an audience-signed playing card disappear and then reappear in pockets or wallets. Think of it like speed dating, but for magicians and audiences.

“We’ve been really excited by audiences’ reaction to Speakeasy Magick,” Hawas says. “It is the perfect marriage of space, vibe, and art. New York audiences are especially primed for this sort of thing; they’re adventurous, and that disposition lends itself really well to all of the curious experiences here at The McKittrick.”

An adult-oriented magic show likely isn’t the first thing on your mind when you plan a trip to New York City, or any large city for that matter. But it should be. Sleight of hand is more fun with a drink in hand. These are the shows that’ll convert you into a magic fan.

The best adult magic shows in the US 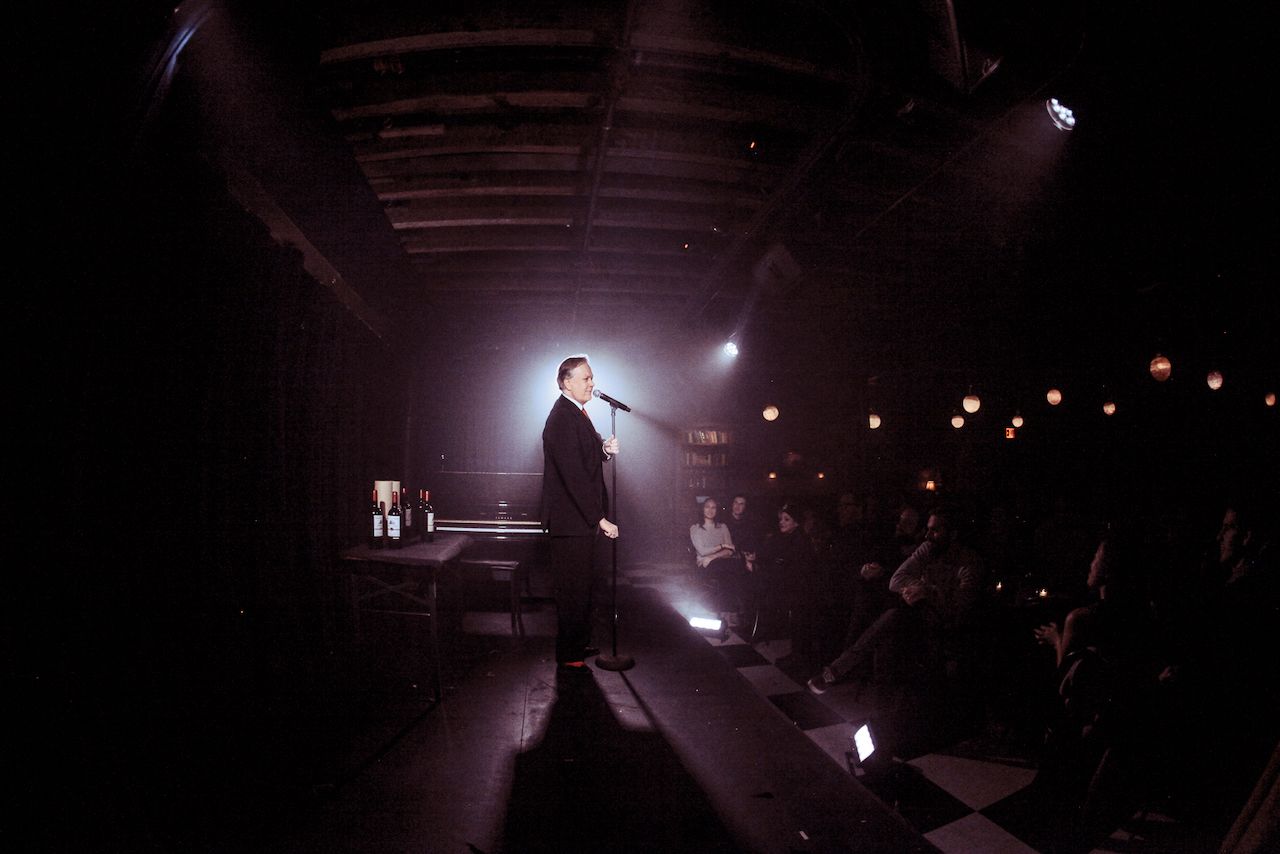 Intimate performances are done tableside by magicians who have worked with performers like Criss Angel, Penn and Teller, and more. Each experience is different, as you’ll end up with a different cast each time you go. 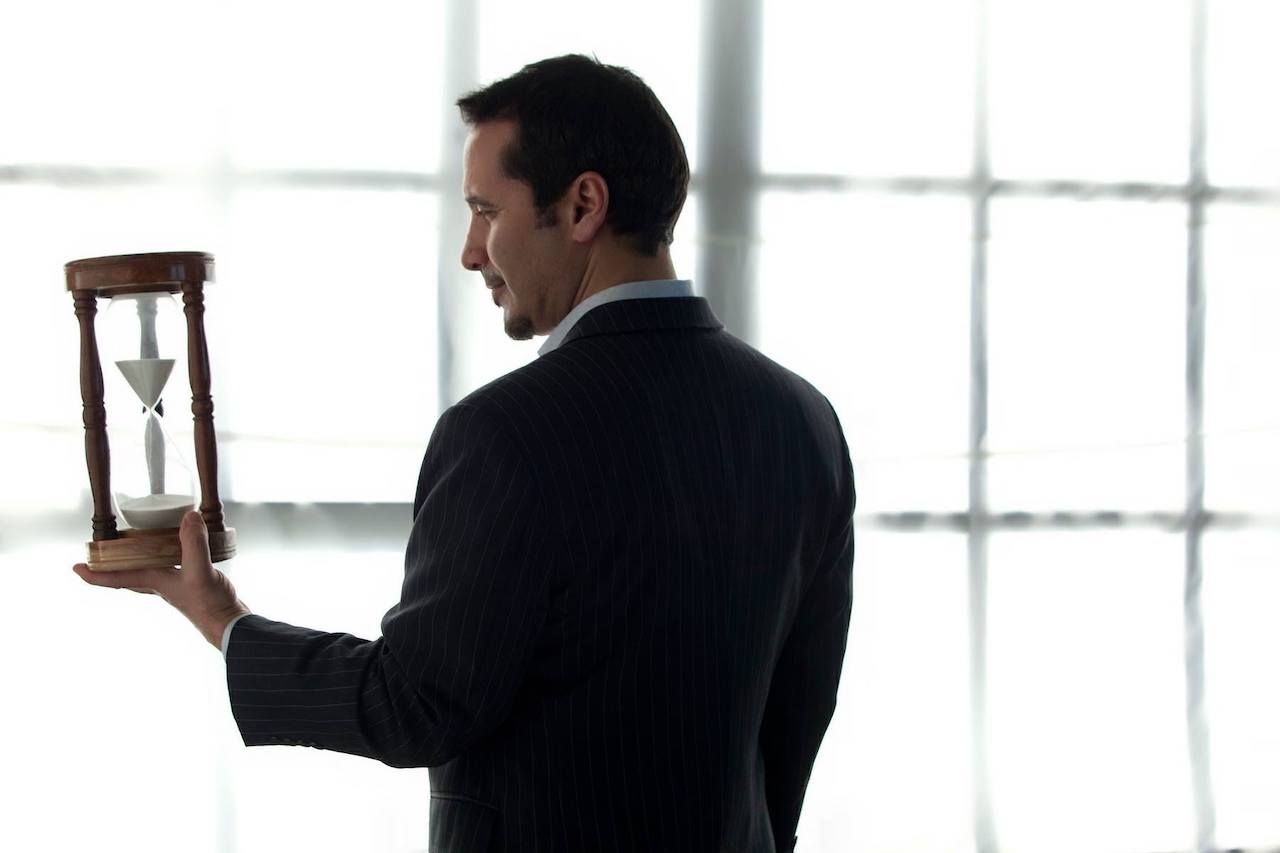 If you find yourself going to Disneyland with the fam and are looking for a more adult variety of magic, head to Magic & Wine in Anaheim, where wine tasting and magic join for what Johnny Depp has apparently called “the greatest thing” he’s ever seen. The 100-person audience spends an hour eating small plates and sipping wine, which is followed by a 90-minute show by David Minkin in an adjacent room.

When and where: Shows take place at the Anaheim Majestic Garden Hotel on select Fridays at 7:30 PM. 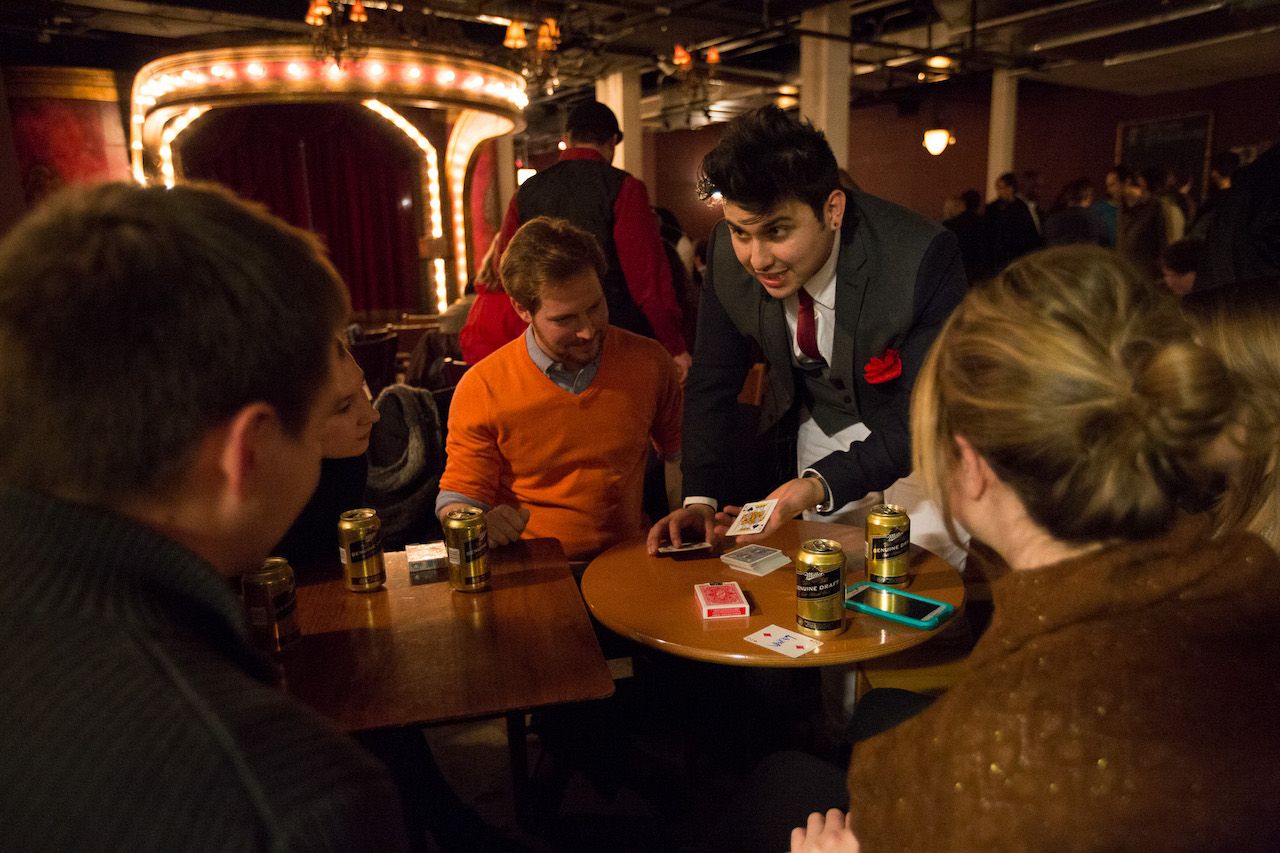 Modeled after Chicago’s close-up magic bars of yore, the Chicago Magic Lounge offers guests three chances to catch some magic: a performance bar where you can order drinks, a 120-seat cabaret theater, and a close-up showroom called The 654 Club. You’ll be entertained with drinks and magic no matter where you choose.