If you love to surf and ski then you’ve probably faced the near-impossible task of choosing between the beach and the mountains. But what if we told you that scattered around the world are a number of special places where you can surf and ski on the same day? You’ve heard it right. You can achieve the dream in the wilds of Canada’s Vancouver Island, California’s Orange County, and Maine. There’s opportunities around Biarritz, a swanky resort on France’s Basque coast, and Christchurch, set between New Zealand’s Pacific shoreline and rugged mountains, too.

At these thrilling destinations the waves and snow are less than a four hour drive away, meaning that you can paddle out to an uncrowded lineup and carve up on powdery slopes in the same day. Here we’ll opt for a morning surf and an afternoon ski, but ultimately the order of play is down to you. 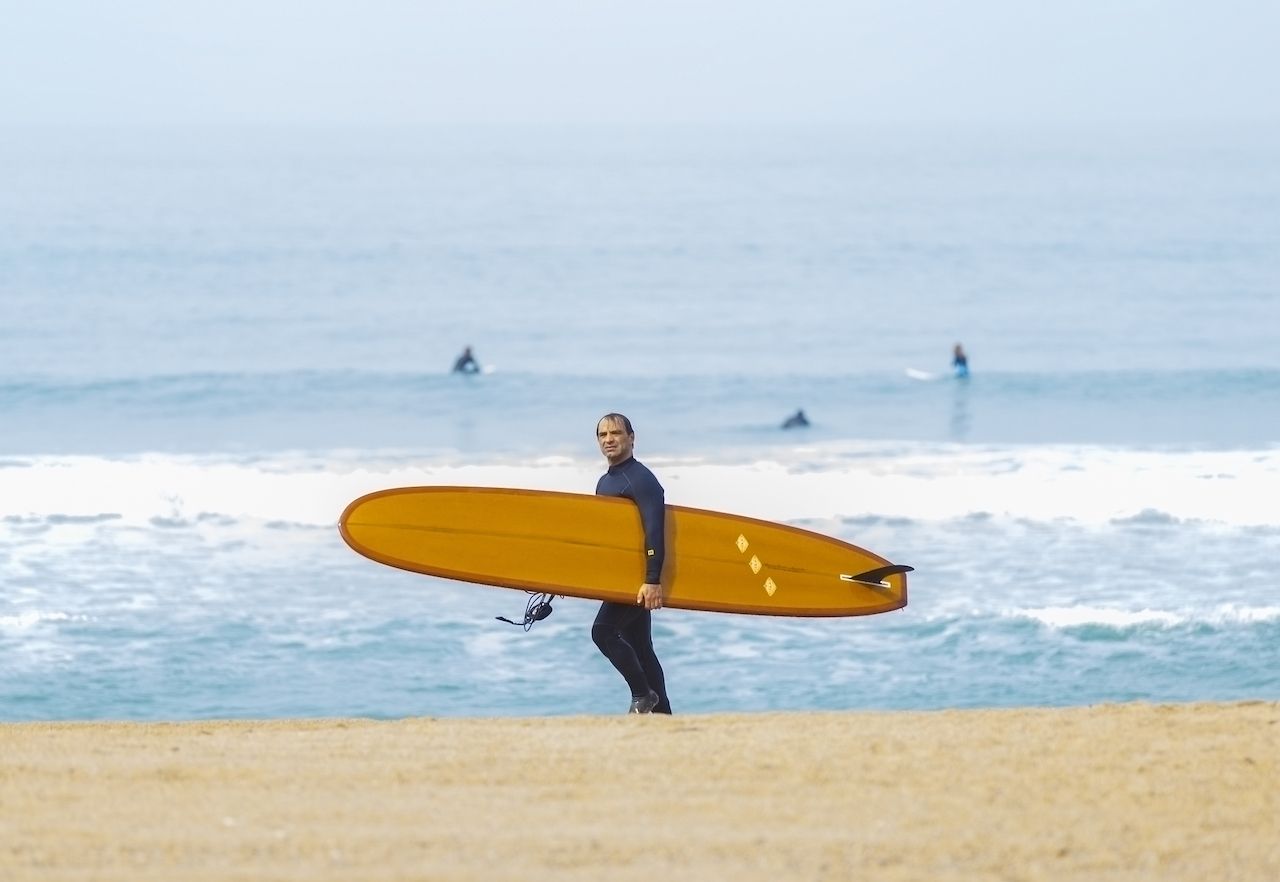 Ever since surfers started riding the hollow waves at Cote des Basques and Grand Plage in the 1950s, Biarritz has been the historic surfing capital of Europe. The surf at this stylish Basque seaside town works all year round, although wintertime brings notably huge swells — the legendary Belharra wave in the nearby town of Saint Jean-de-Luz is known to reach 50 feet and over. Ask any hardcore local surfer and they’ll probably trade the sun-drenched and overcrowded summer for the chill of winter. For classes on Cotes des Basques beach try the French Surf Federation-approved Jo Moraiz Surf School. 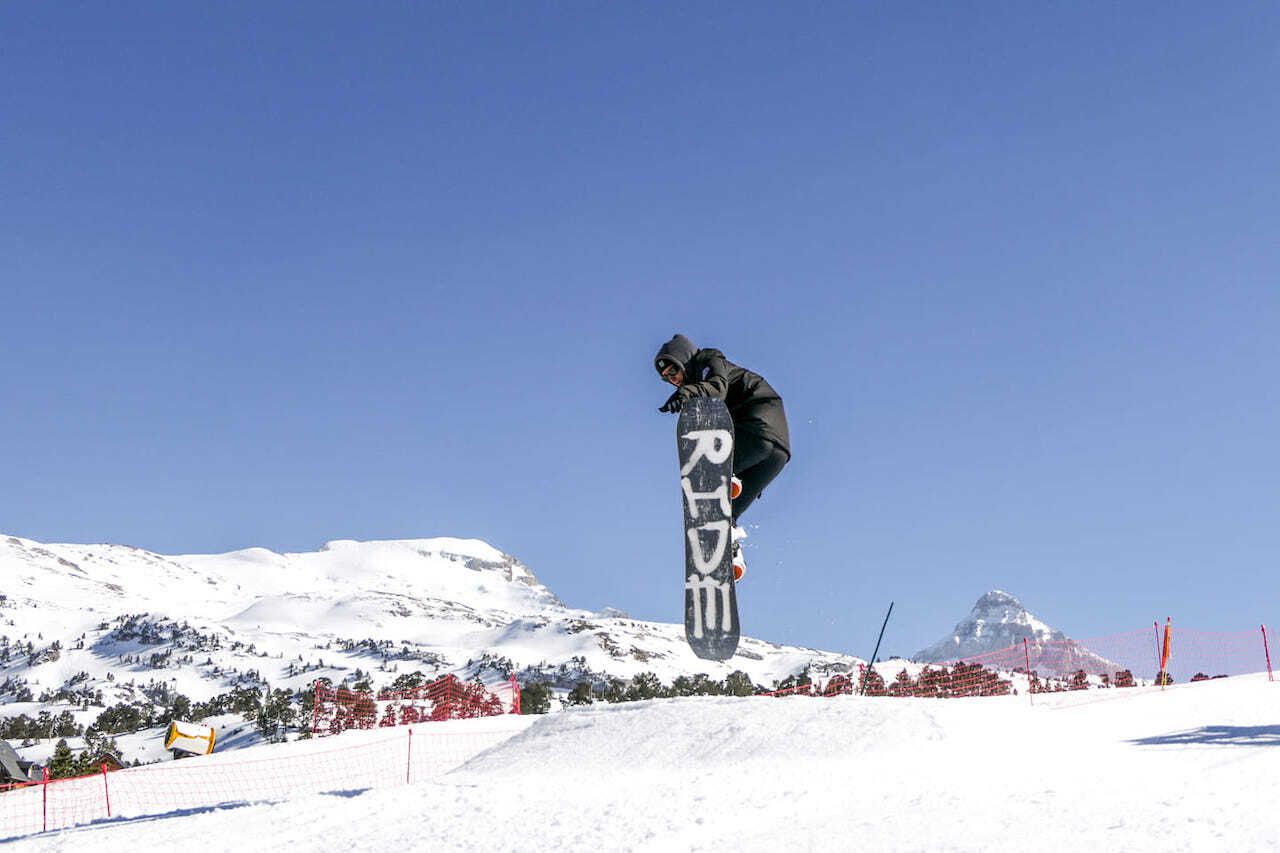 For the afternoon adventures, drive inland for just over two hours (about 95 miles) to the La Pierre Saint-Martin ski resort in the western Pyrenees. Consider parking up at Cave Verna to tour an illuminated cave system and underground waterfalls before continuing to the slopes. The resort itself has 25 pistes at heights of up to 7,200 feet and spread over 185 acres of skiable terrain. Besides skiing and snowboarding, the family orientated resort offers snow scooter riding, snowshoeing and tobogganing. You might want to book an overnight stay at one of the village’s chalets for a well-earned rest amid a pristine pine forest. 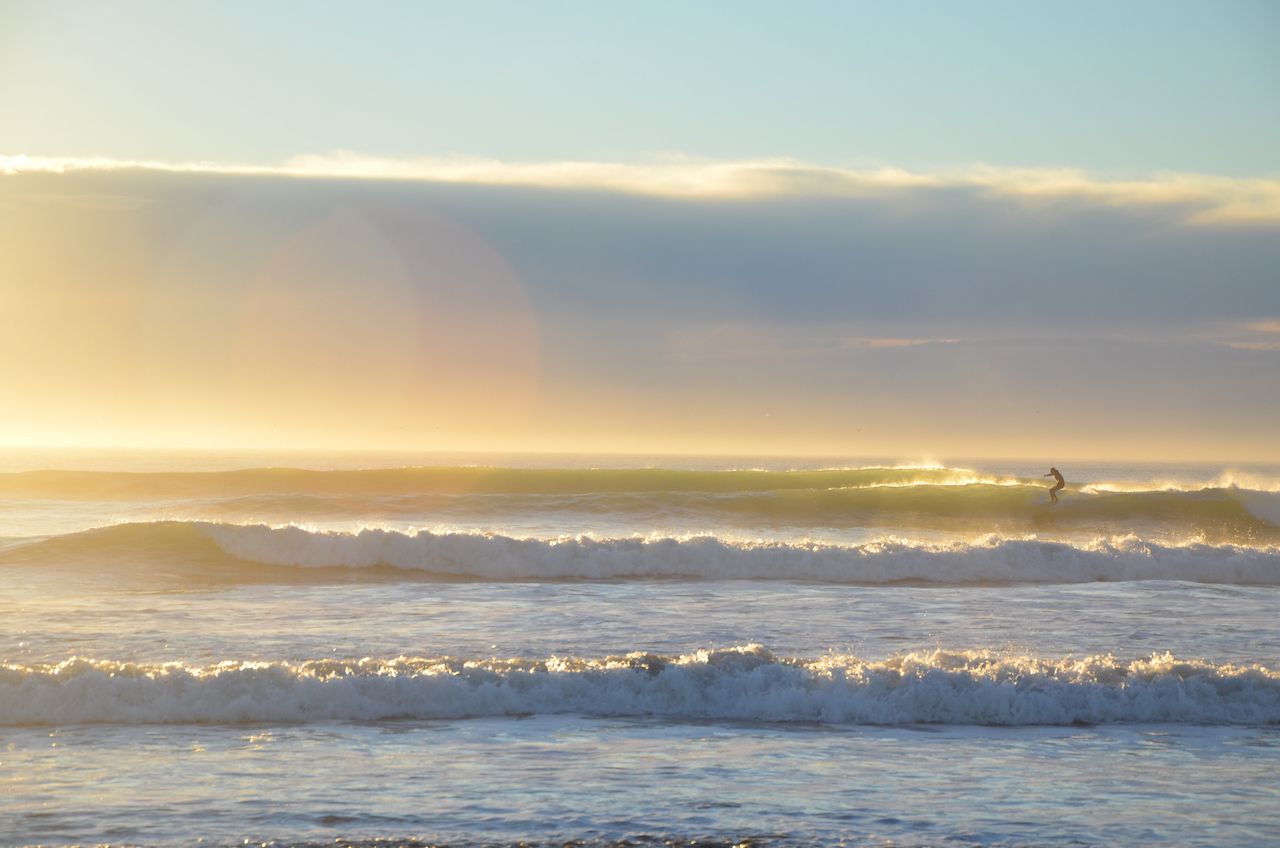 Thoughts of New Zealand regularly evoke images of lush valleys and snowy mountains, but the Pacific nation is a superb surf destination, too. Start in the coastal suburbs of Christchurch that sit along the shores of Pegasus Bay. Beginners should stick to Scarborough Beach, where waves are best two to three hours either side of high tide. Those in search of a fast moving beach break and barrels can check out Taylors Mistake Beach, which works well on all tides. There’s free beachfront parking at both spots, and changing facilities at Taylors Mistake, should you want to clean up before moving on. 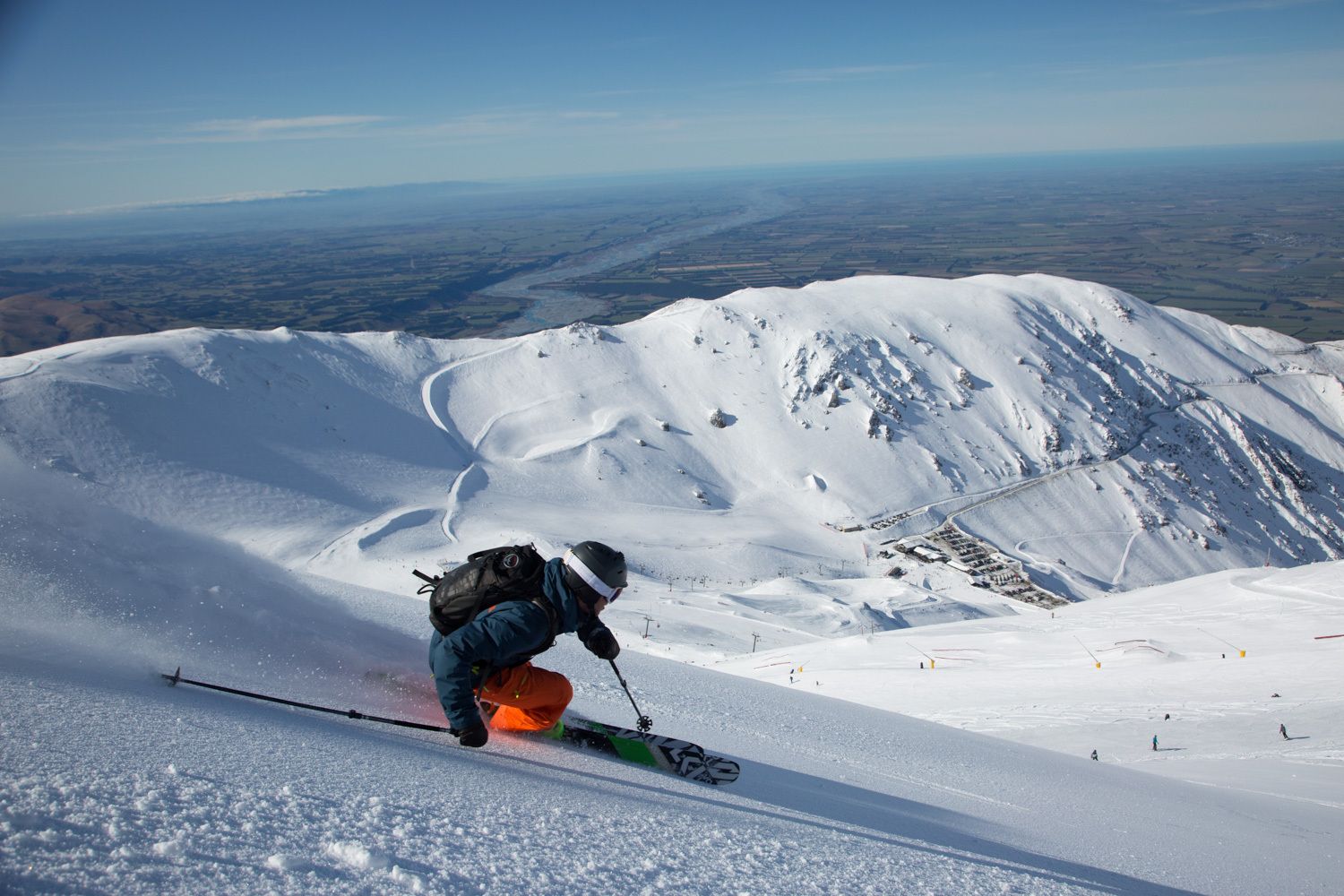 From Christchurch it’s just a 90-minute (70 mile) cruise through rural landscapes to the 900-acre Mount Hutt Ski Area. If you haven’t refueled around Christchurch then take the chance to delve into the Canterbury region’s viticulture. Melton Estate offers lunches and wine tastings from Thursday to Sunday — of course, it all depends on how much time you have and if you can decide on a designated driver. After all, you’ll be eager to hit the slopes on 7,185-foot-tall Mount Hutt, which receives a monster snowfall from June to October.

Note: Remember that New Zealand is in the Southern Hemisphere, so the ski season is opposite to the US. 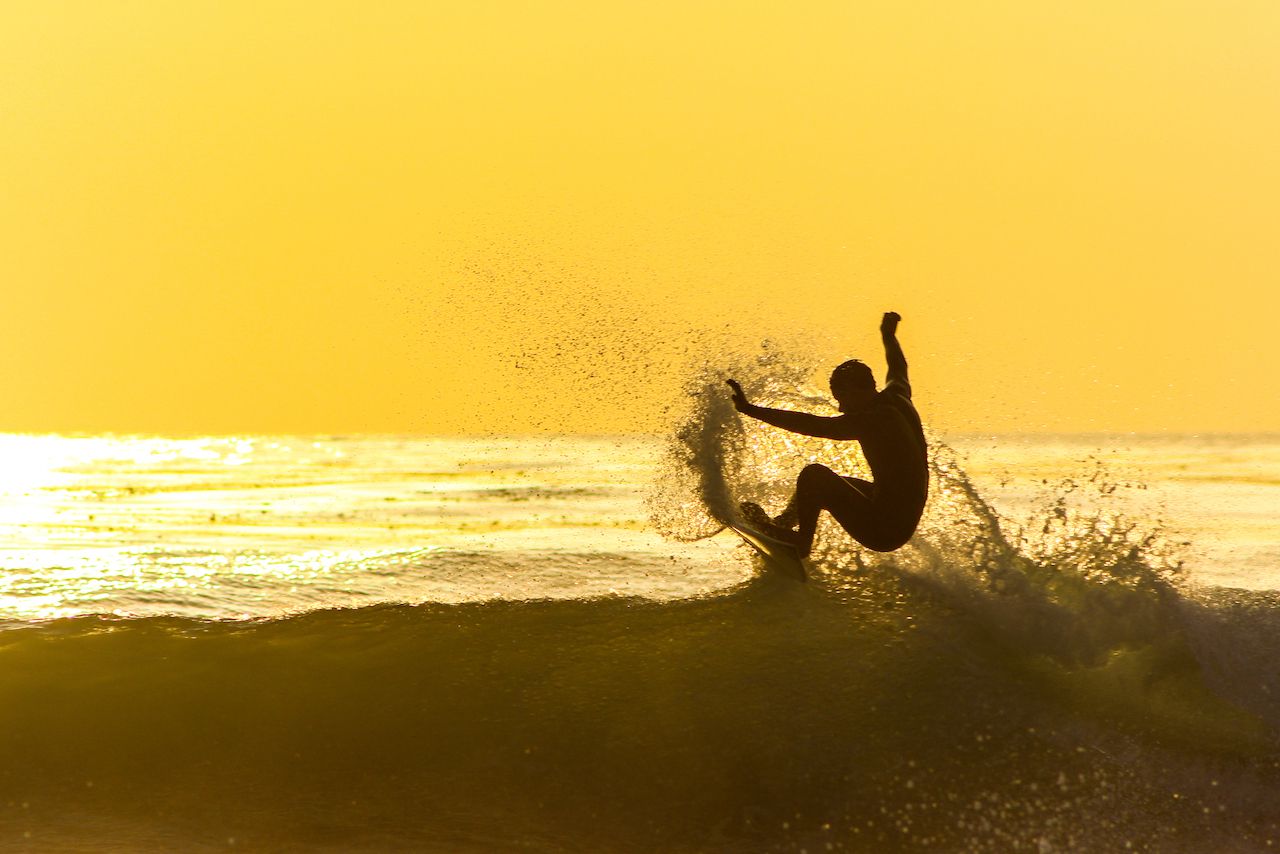 With rugged mountains rising above a dramatic Pacific coastline, Southern California seems made for the surf-and-ski crowd. Winter surfing SoCal-style means big waves, small crowds and chilly waters, and surfers are spoiled for choice in Orange County. Huntington Beach and Newport Beach are consistent year-round and remain mellow in wintertime, thus invite beginners to enjoy the fun. Drop into Newport’s Endless Sun Surf School for classes. Confident boarders can join the pros and natives at the five breaks of Trestles — it’s a mile-long walk from the parking lot to the beach, but the adrenalin rush will make it feel like a short hop. 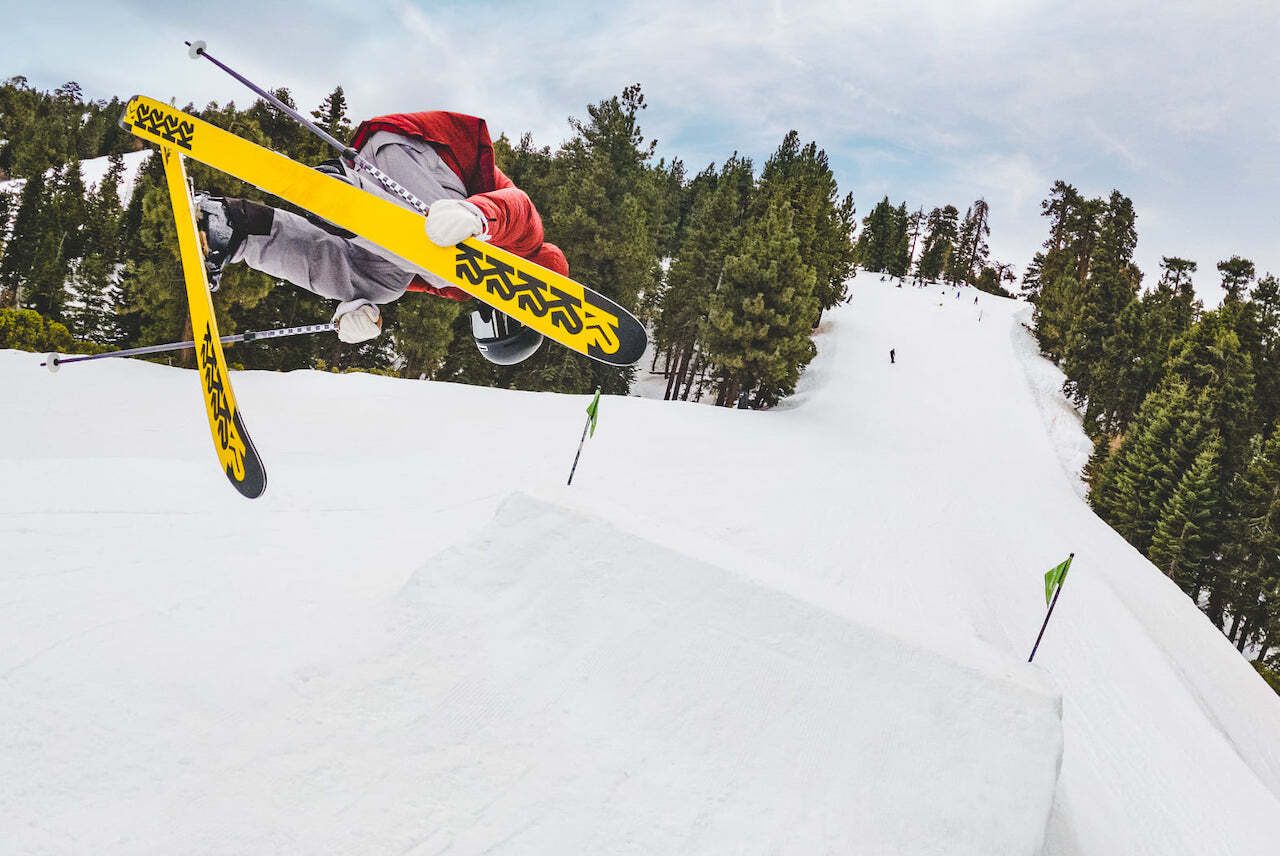 It’s the best part of a three hour (120 mile) drive to Bear Mountain Ski Resort, either via a section of the Cleveland National Forest or with a detour around the Temecula Valley Wine Country. We wouldn’t blame you for stopping for a tour of the award-winning Wilson Creek Winery or being tempted by a hike along the short San Juan Loop Trail. However, over 400 acres of skiable area, 55 runs and some of the best terrain parks in the US await on Bear Mountain. There’s plenty of waterfront accommodation in Big Bear Lake, too, if you’ve nowhere else better to go.

Note: November through March is prime time for spotting gray, humpback and minke whales off the Southern California coastline. 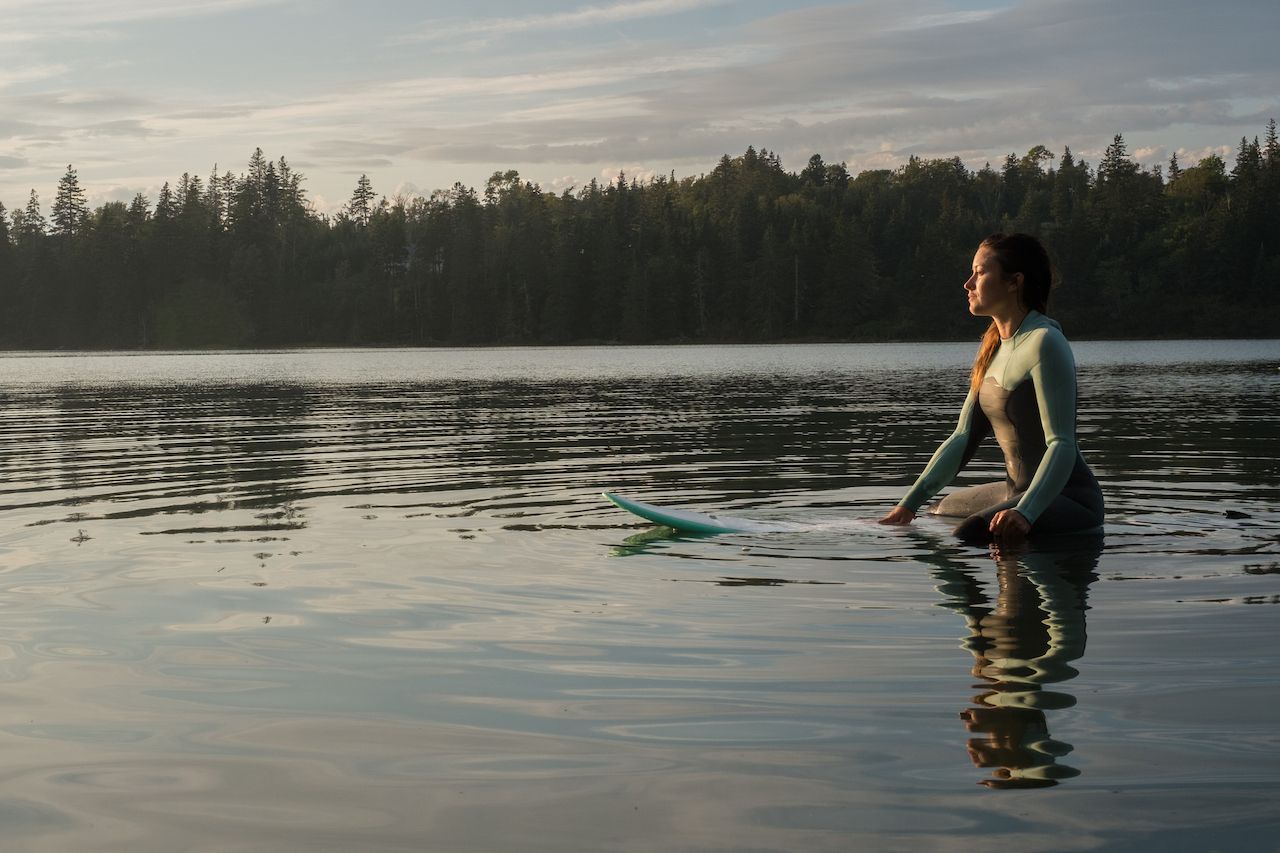 It’s usually only local New Englanders and true surf fanatics that are brave enough to plunge into the Atlantic waters of Maine in winter. Yet, if you are happy with that ice-cold sensation and want to score big surf then a trip to Scarborough will produce some memorable sessions. One thing is for sure, you won’t be competing with crowds along the seven mile stretch of surfable water at Old Orchard Beach, which can witness ten-foot-high waves. Elsewhere along the coastline, Higgins Beach and Fortunes Rock are the places to be. Stay at the forested Bayley’s Camping Resort and you’ll be a quick drive from a sunrise surf at Pine Point Beach. 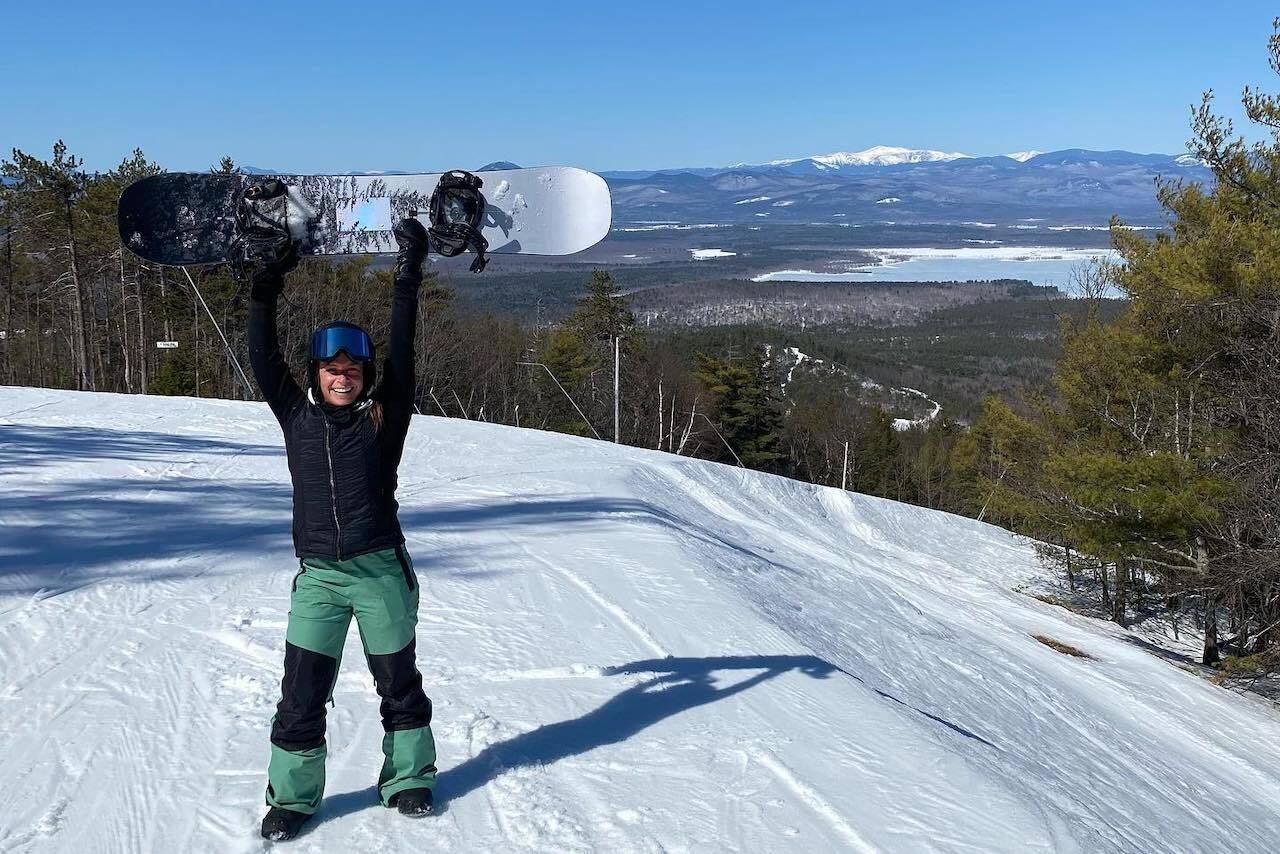 From nearby Portland the US Route 302 leads all the way to Shawnee Peak (about an hour’s drive). The drive is a delight, passing a collection of glacial lakes, such as the immensely deep Sebago Lake, on the way. With an offer of 40 trails, seven glades and three terrain parks, there’s enough to make you want to swap the surfboard for a pair of skis or snowboard. There’s uphill and night skiing, too, in case you’ve the energy reserves. You’ll also be just an additional hour’s drive from the notably larger Sunday River Resort and its 135 trails.

Note: Maine’s ski season extends into early April, which is handy if you want to wait for slightly milder temperatures both in and out of the water. 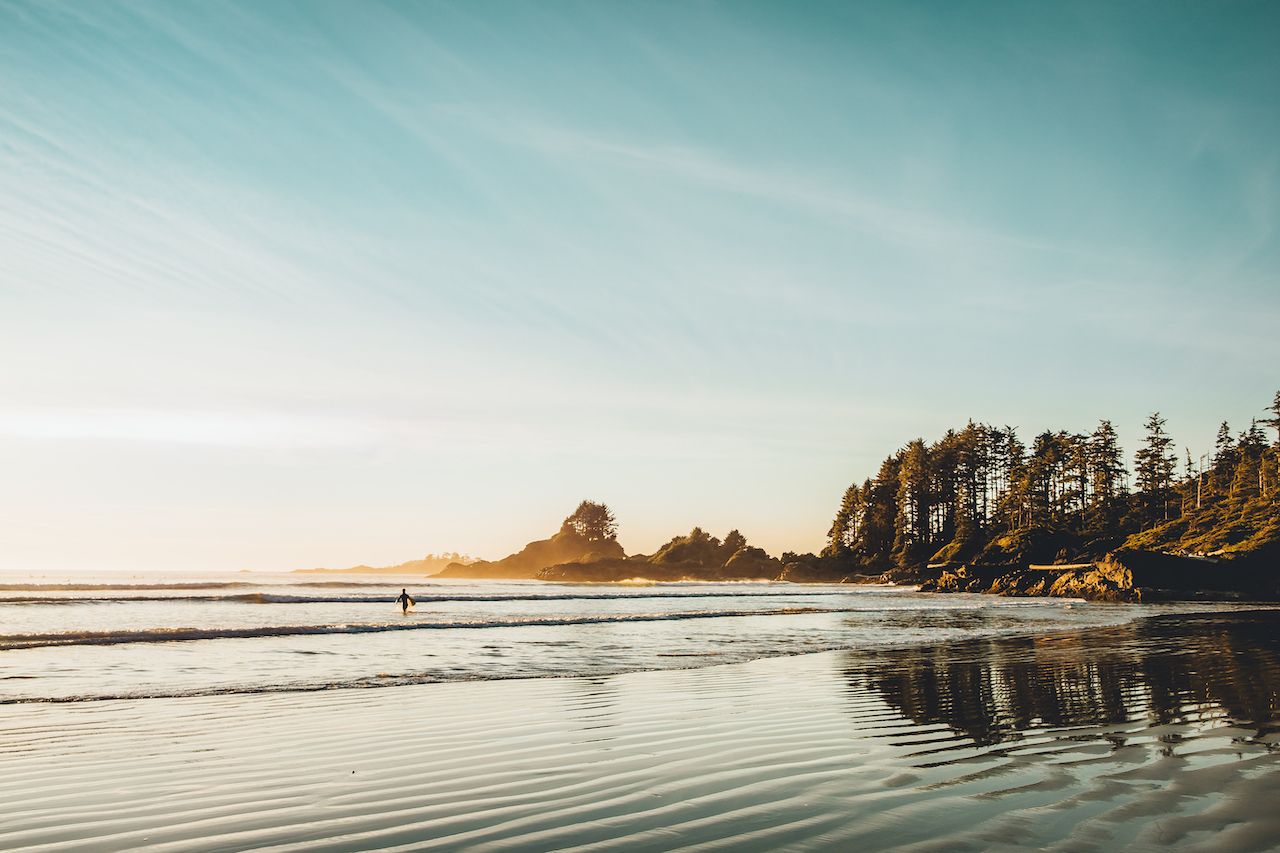 Few people are aware that Tofino, on the wild western coast of Vancouver Island, is the surfing capital of Canada. The peninsula outpost has 22 miles of all-but empty beaches, many of which fall within the Pacific Rim National Park. Akin to many surf spots, the waves are higher here in winter. That said, Chesterman Beach, Covey Bay Beach and Long Beach all have forgiving days ideal for newbies. If this is your first time in the water, the Pacific Surf Co. will soon have you popping up. Come with a tent and you can pitch at Covey Bay and Long Beach in preparation for the dawn surf that’ll allow for the afternoon ski. 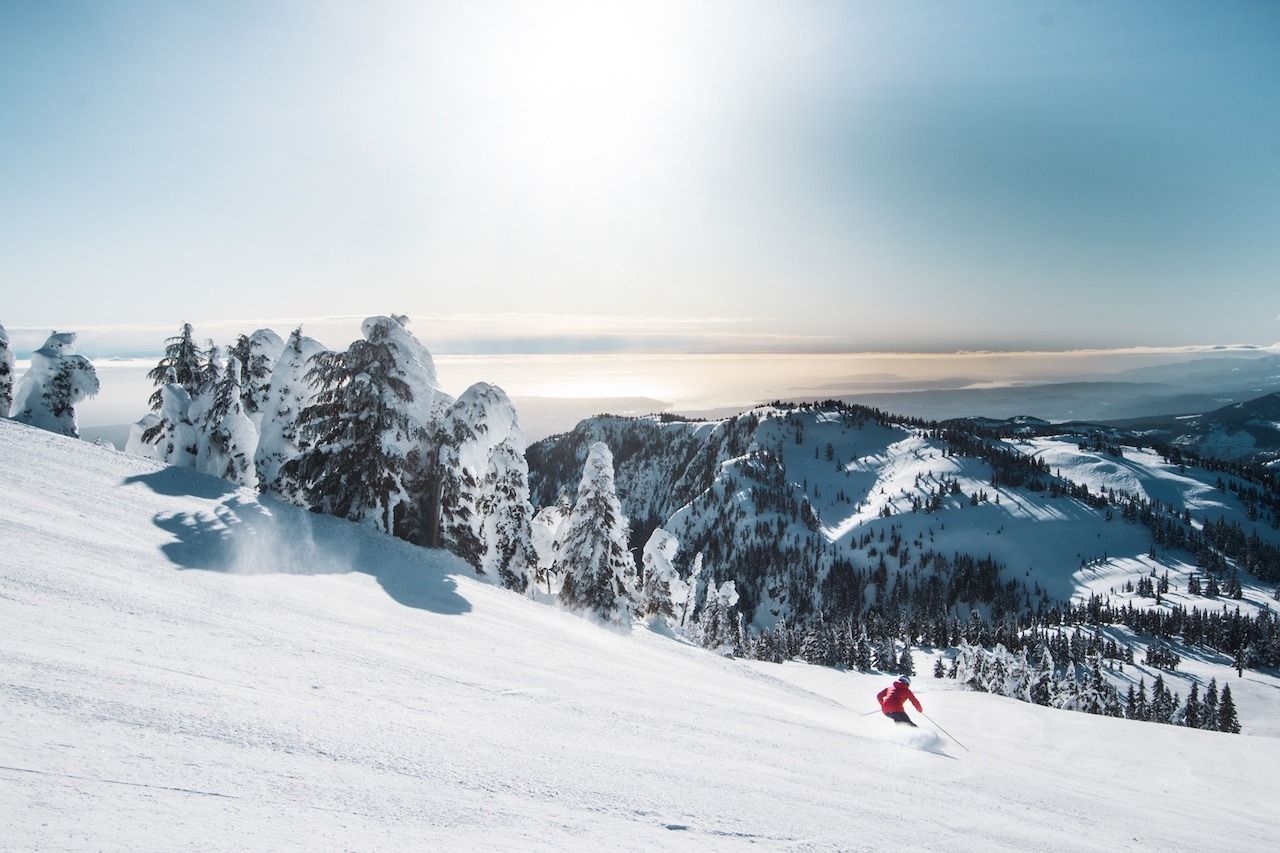 To reach British Columbia’s Mount Washington Alpine Resort, you first need to embark on a three and a half hour road trip past mirror lakes and around old-growth forests. Cathedral Grove is certainly worth a pit stop to admire giant cedars and picnic on a lakeside, and so is the Cumberland Brewing Co. for crisp craft beers. It’s hard not to have fun on Mount Washington, which receives some of North America’s heaviest snowfall. You can ski here until late-March and the extra spring sunlight aids in making surf-and-ski days last longer.

Note: Vancouver Island is accessible via a one and a half hour ferry ride between Horseshoe Bay, Vancouver, and Nanaimo.

OutdoorThere Really Are More Sharks in the Water, but You Can Still Swim and Surf
Tagged
Ski & Snow Surfing
What did you think of this story?
Meh
Good
Awesome