Many people would struggle to name the six Celtic nations in the world: Ireland, Scotland, Wales, Cornwall, the Isle of Man, and Brittany. Even fewer would be able to place them on a map or explain the differences between each.

Among the most prominent distinctions between the six Celtic nations are the languages they speak (Irish Gaelic, Scottish Gaelic, Welsh, Cornish, Manx, and Breton, respectively) and the flags they fly. There are as many Celtic flags as they are Celtic nations, and each has its own significant color scheme and composition.

These are the six Celtic flags and the meaning behind each design. 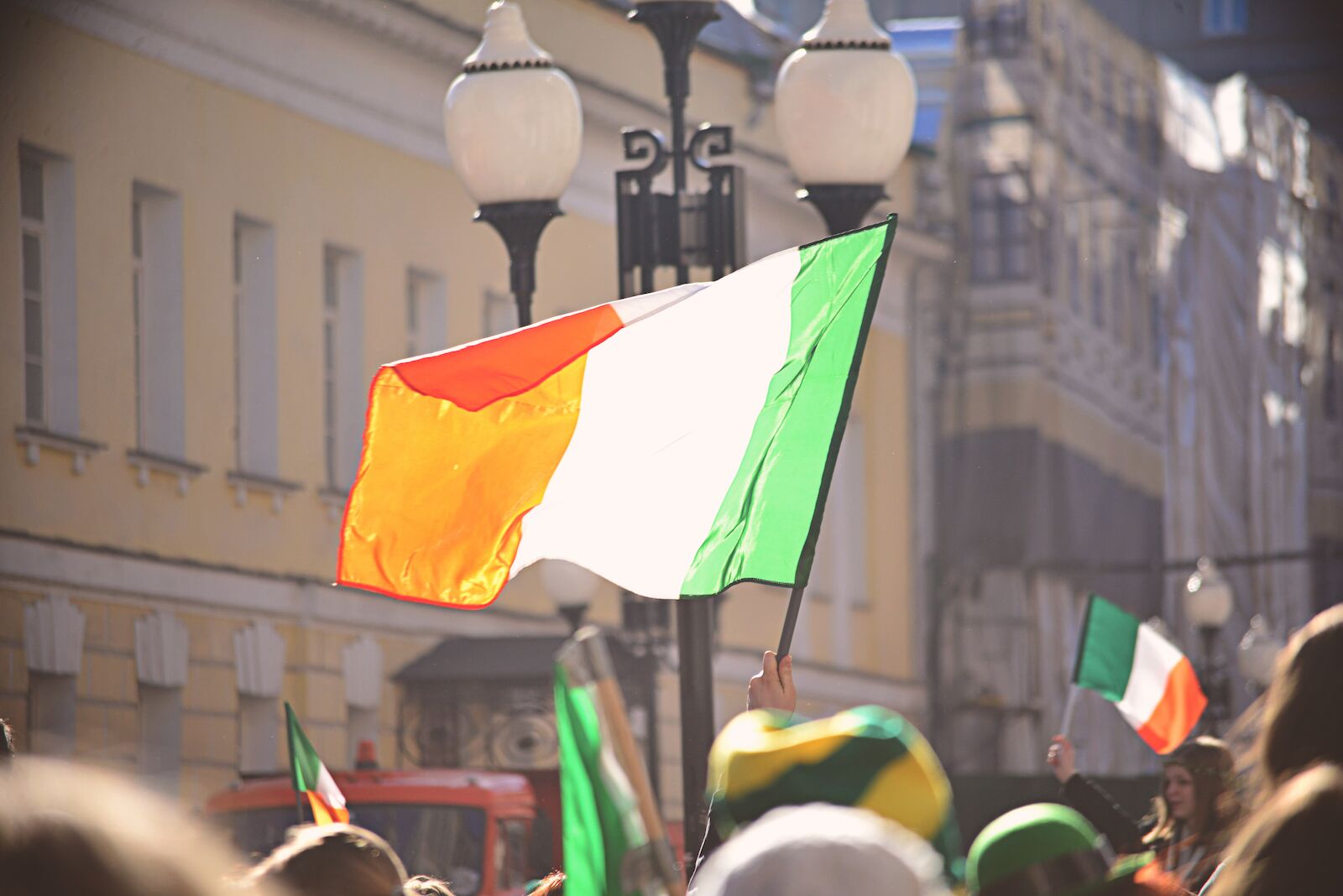 The flag of the Republic of Ireland, also known in Irish Gaelic as bratach na hÉireann, or commonly referred to as the tricolour, is rectangular and composed of three colors arranged in equal-size vertical stripes: green (always next to the flagstaff), white (always in the middle), and orange (always farthest from the flagstaff).

Green represents the Irish Republicans who fought for Ireland’s independence from Britain, while orange evokes the Irish protestants. White is meant to unite the other two colors and symbolize peace between the two groups.

This Celtic flag was adopted as the flag of the Irish Free State in 1922 and confirmed as the National Flag in 1937. For more information on the Irish flag, including its detailed history, how to display it, how to salute it, and more, consult Article 7 of the Constitution of Ireland. 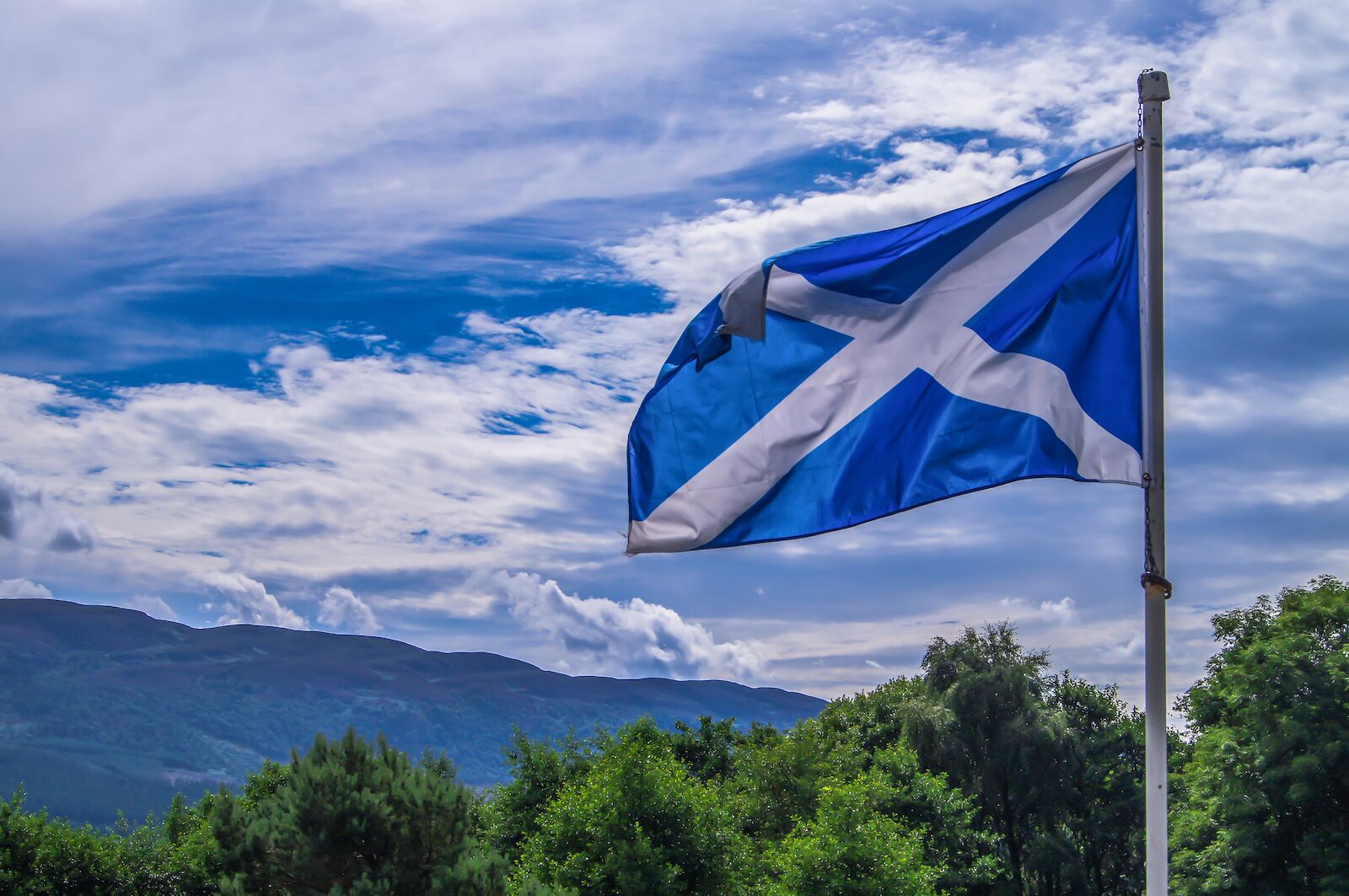 Scotland’s flag, also known as the Saltire, is a rectangular flag with a blue background (Pantone 300) and a white diagonal cross.

The name Saltire comes from the cross saltire of St. Andrew, who’s the patron saint of Scotland. St. Andrew is believed to have been martyred on a diagonal cross.

One of the six Celtic flags, the Saltire is said to be the oldest flag in Europe, originating in the village of Athelstaneford, Scotland, in 832 AD. Today, Athelstaneford is home to National Flag Heritage Centre, where you can learn everything there is to know about the flag. 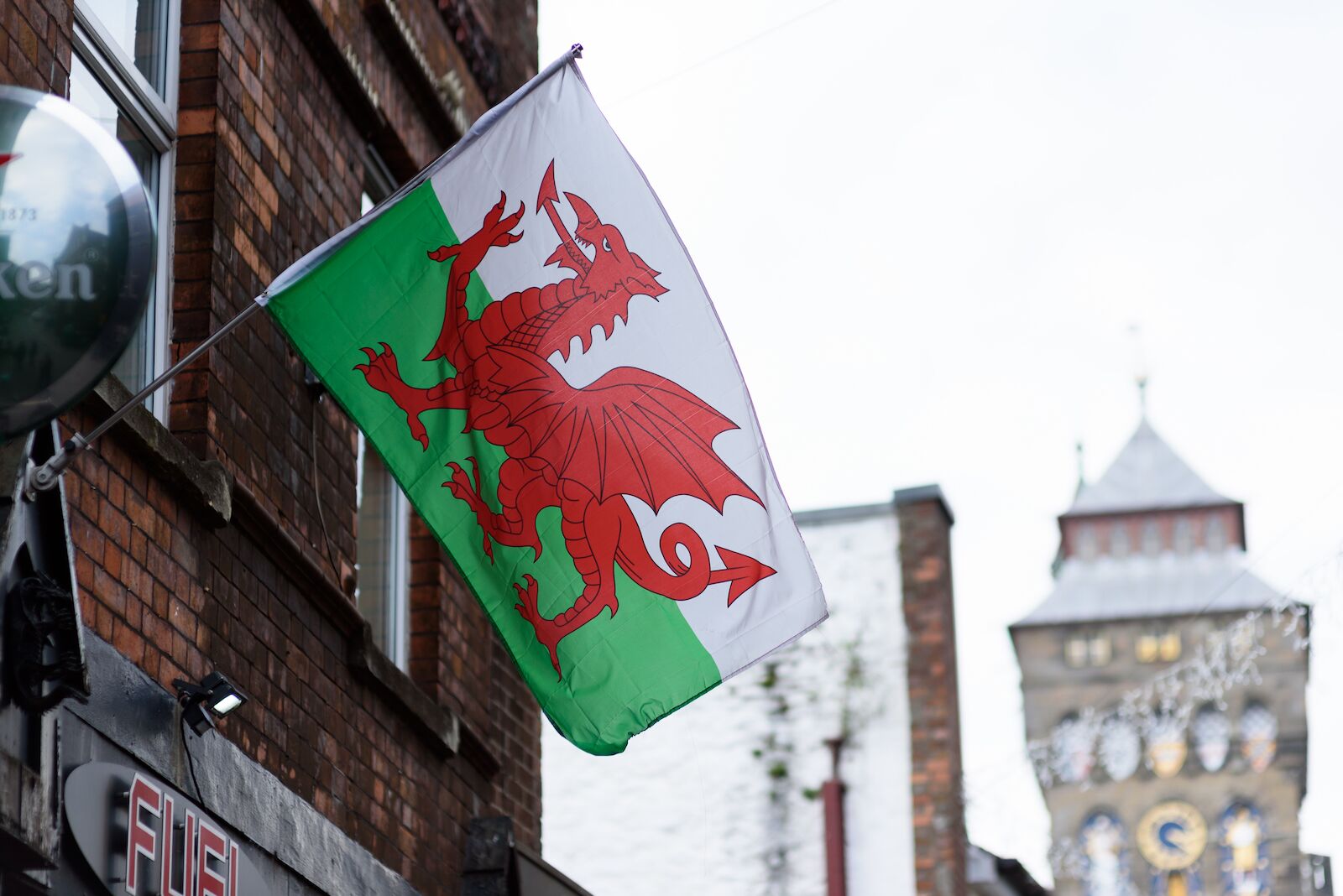 The national flag of Wales, also known as Y Ddraig Goch (the red dragon) in Welsh, is rectangular in shape and composed of two equal horizontal stripes: one green (at the bottom of flag) and one white (at the top). A large red dragon, facing the flagstaff, is featured in the center of the flag.

According to the Flag Institute, the red dragon has been a symbol of Wales since around 655 CE.

The Welsh flag is a recent one, having been adopted in 1959. The previous iteration of the Welsh flag, adopted in 1953, featured the same colored horizontal stripes, as well as a small red dragon, surrounded by a ribbon of Welsh words: Y Ddraig goch ddyry cychwyn (meaning “the red dragon gives impetus”). 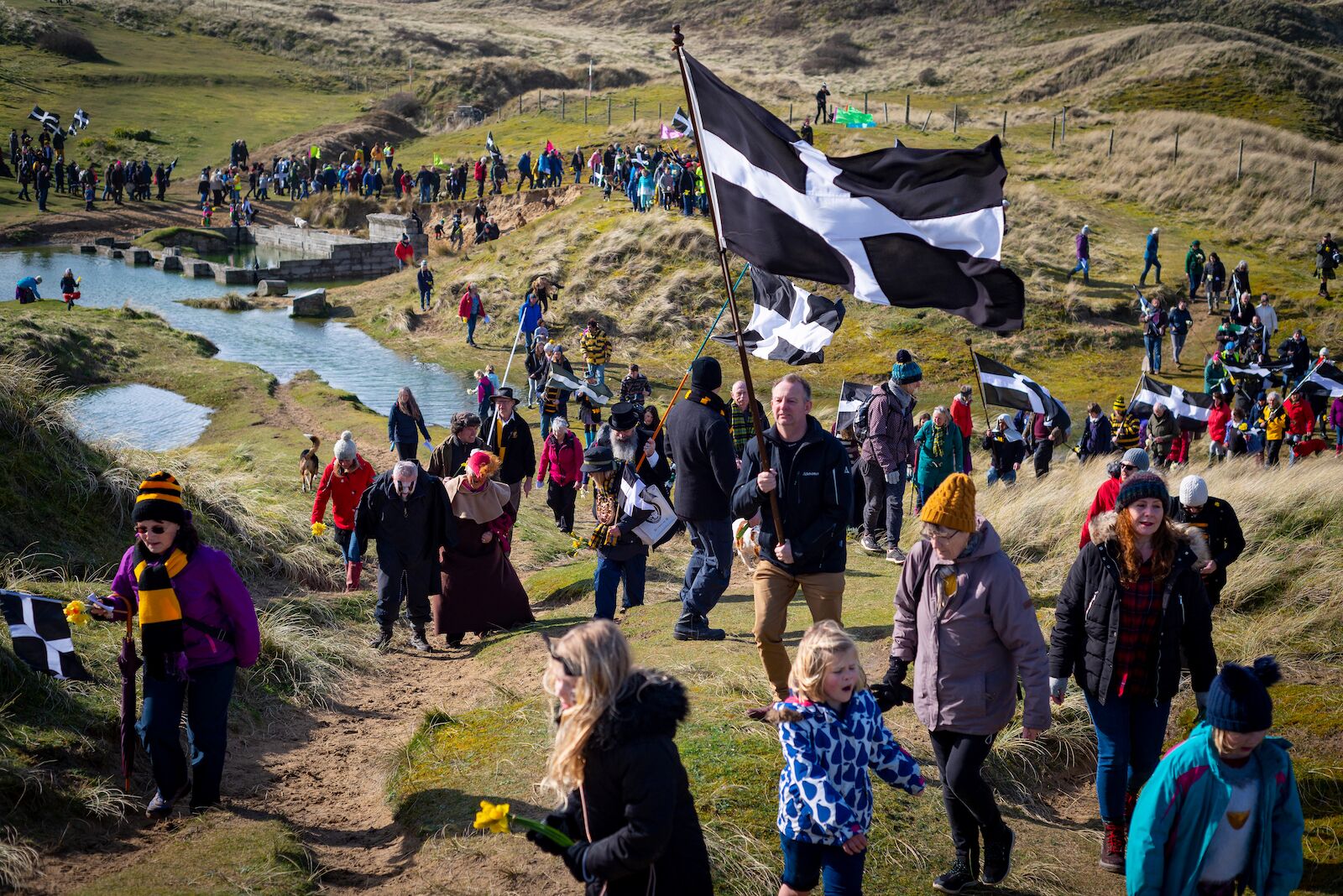 The Cornish flag, also know as the flag of St. Piran (Baner Peran in Cornish), is a rectangular shape and features a white cross on a black background.

According to the BBC, the two simple shades of this Celtic flag symbolize “white tin flowing from the black rock, or good overcoming evil.” 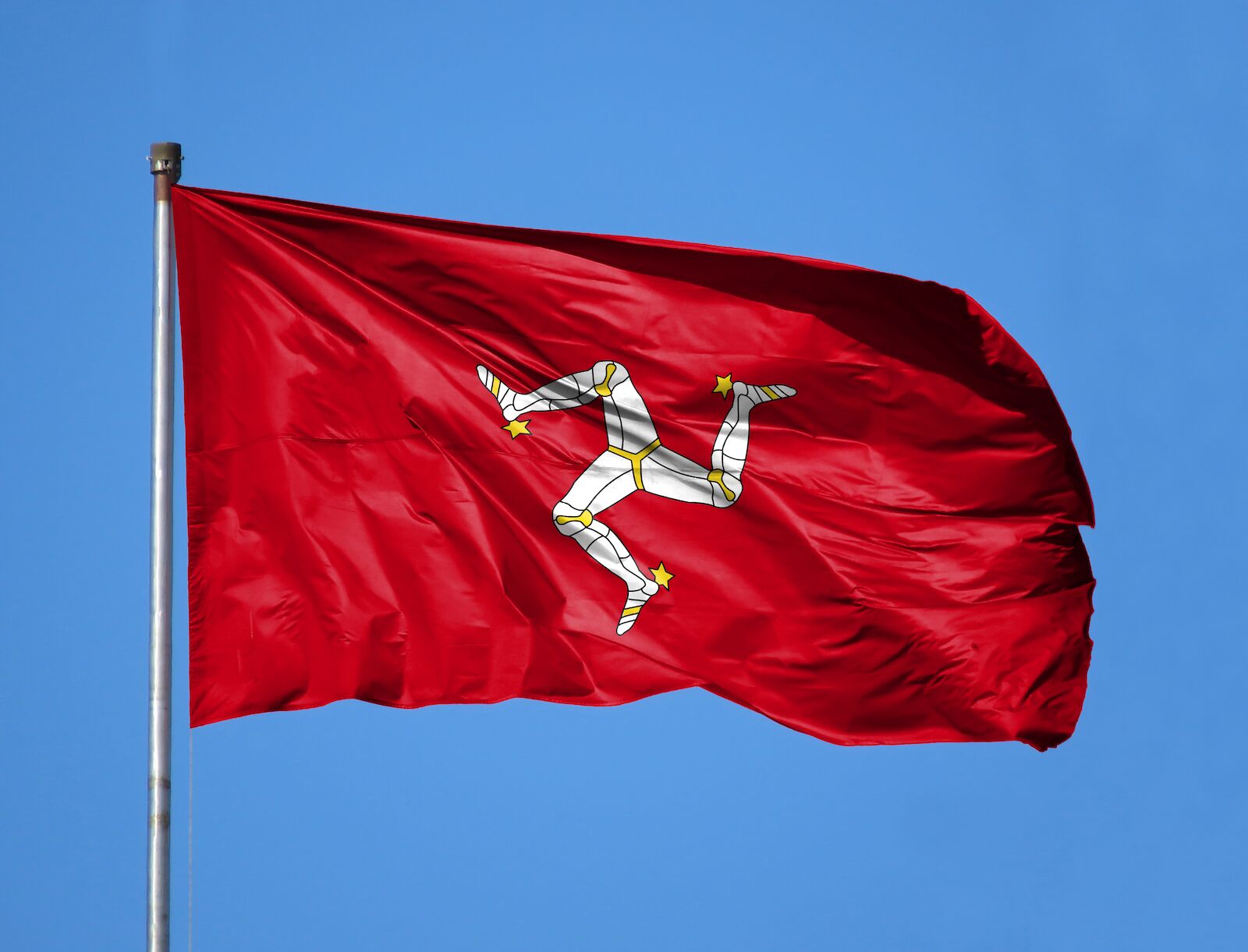 The Three Legs of Mann are three armored and spurred legs arranged in a triple spiral. The knees, the spurs, and the center of the triskelion are yellow while the legs are the gray color of steel.

The Manx triskelion is believed to have originated in the 13th century. The Manx National Heritage association explains that the Three Legs of Mann “was originally a symbol of the sun and of power and life” during Pagan times.

The flag of Sicily, which is not a Celtic nation, also features a similar triskelion of legs. 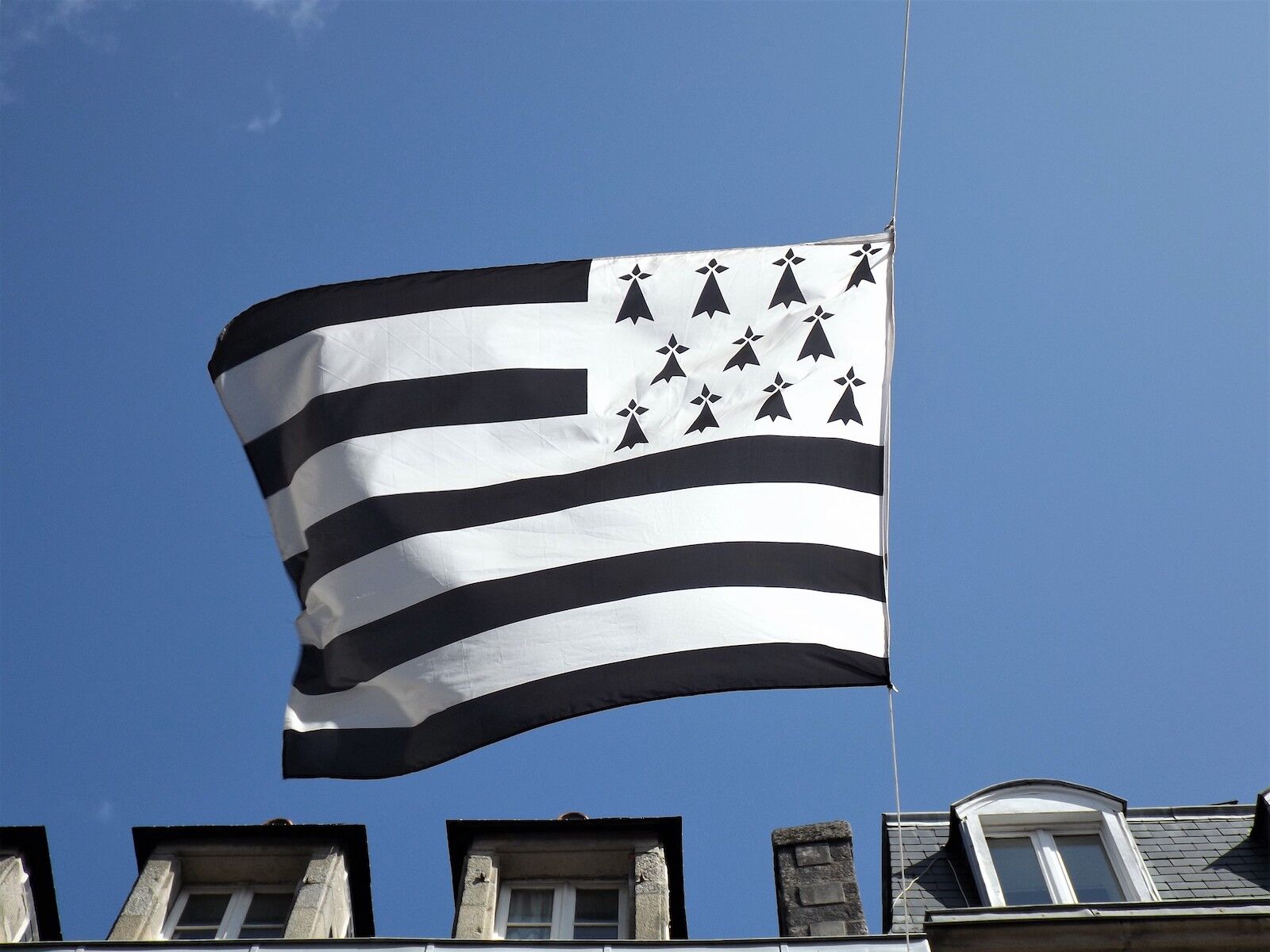 The Breton flag, also known as Gwenn ha du (black and white) in Breton, is the flag of the Celtic region of Brittany in France. It is rectangular with nine alternating black and white stripes, each representing one of the nine historic areas of Brittany. In the top left-hand corner of the flag, next to the flagstaff, is 11 black ermines. The composition of this Celtic flag is very similar to the one of the US flag.

The ermine, while a Breton symbol, is also the French translation for a stoat, a small weasel whose coat becomes white during winter, except for its tail which remains black. The ermines featured in the Breton flag represent the tail of the animal.

While the ermine has been the symbol of Brittany since the 14th century, the Breton flag is relatively recent — it was created in 1925 to unify the then-threatened Breton identity.

CultureThe 9 Coolest Flags in the World and the Meanings Behind Them
Tagged
Culture Ireland Scotland Wales
What did you think of this story?
Meh
Good
Awesome

9 Outdoor Adventures You Had No Idea Were Possible in Britain