The best possible way to learn, understand, and appreciate a new city is to dig into its history. And few cities in the United States have the historical chops of Detroit, which has been a major part of more US cultural movements than nearly any other city. Forget the things you thought you knew about Michigan’s largest city and go make new discoveries, partake in exciting historical moments, and explore beyond the guide books. This itinerary starts with destruction and finishes with an eye toward the future of one of the US’ greatest cities. 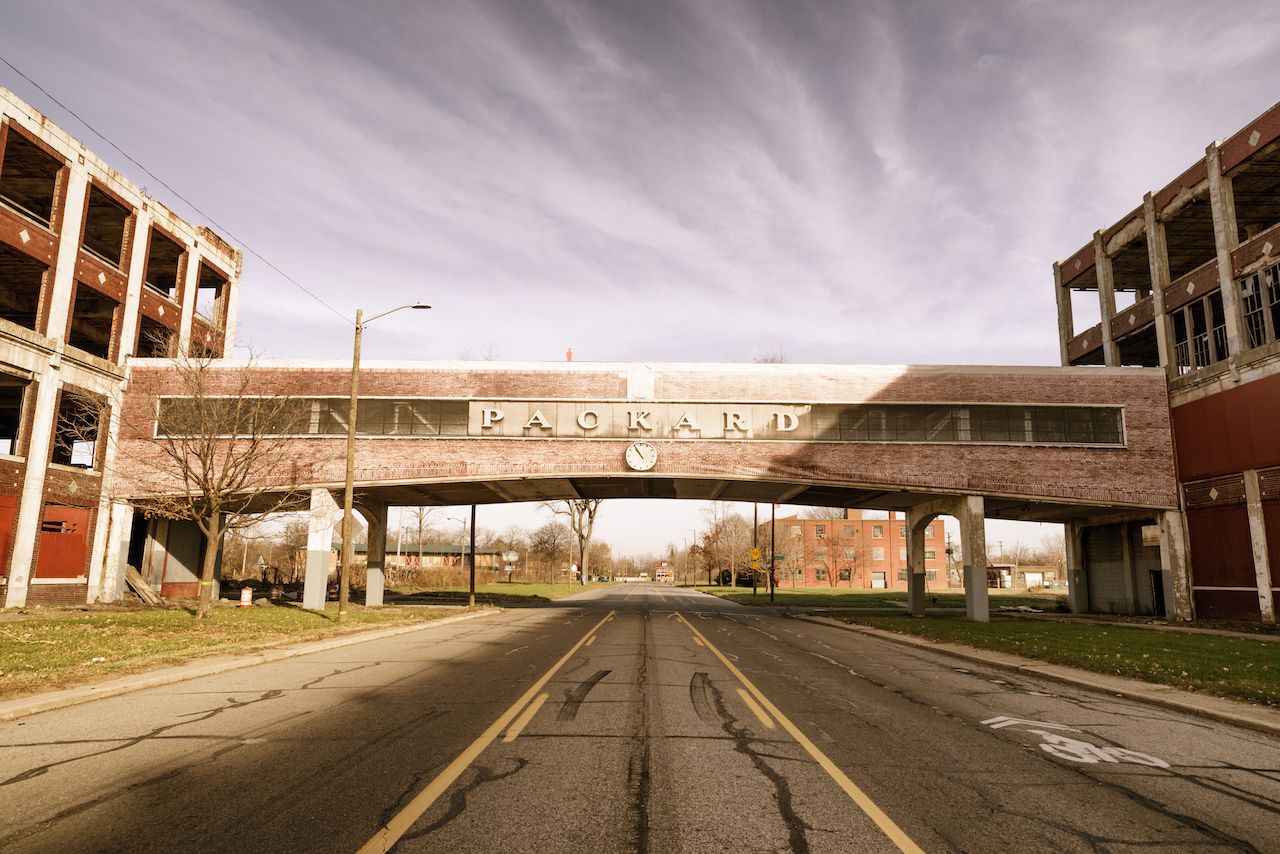 The excitement was palpable in 1903 when the Packard Automotive Plant first opened its doors on East Grand Boulevard. Forty thousand workers streamed into the 3,500,000-square-foot plant to build the fiercely popular Packard vehicles and later, the Packard V-1650 Merlin engine which powered the Mustang fighter plane during World War II. By 1910, the Packard Car Company was the largest auto plant in the US and its innovative reinforced concrete factory construction became the standard for automobile factories across America. Throughout the following decades, however, increased competition and modernization streamlined — and eventually outsourced — much of the work in the automotive world. The plant closed in 1958, becoming the most visible symbol of the decline of Detroit’s automotive empire.

Parts of the property were used for various purposes by other companies until the late 1990s, when it was abandoned completely. As time passed and vandals pillaged, the plant fell into disarray. Shortly after our last visit, the vast concrete bridge over Grand Boulevard collapsed, and it really hit home that an important part of Detroit’s history had just disappeared. However, thanks to work from nonprofit group The Packard Project, the plant is (slowly) being revitalized.

You can visit the plant just off I-94 and though it’s a shell of its former self, you can still feel some of the magic of Detroit’s automotive glory days. It costs nothing to poke around and take photos, though be mindful of closures and “No Trespassing” signs along with exposed rebar and other hazards. Tour operator Pure Detroit occasionally offers guided tours of the premises for $40.

See the ghost of the Belle Isle Zoo. 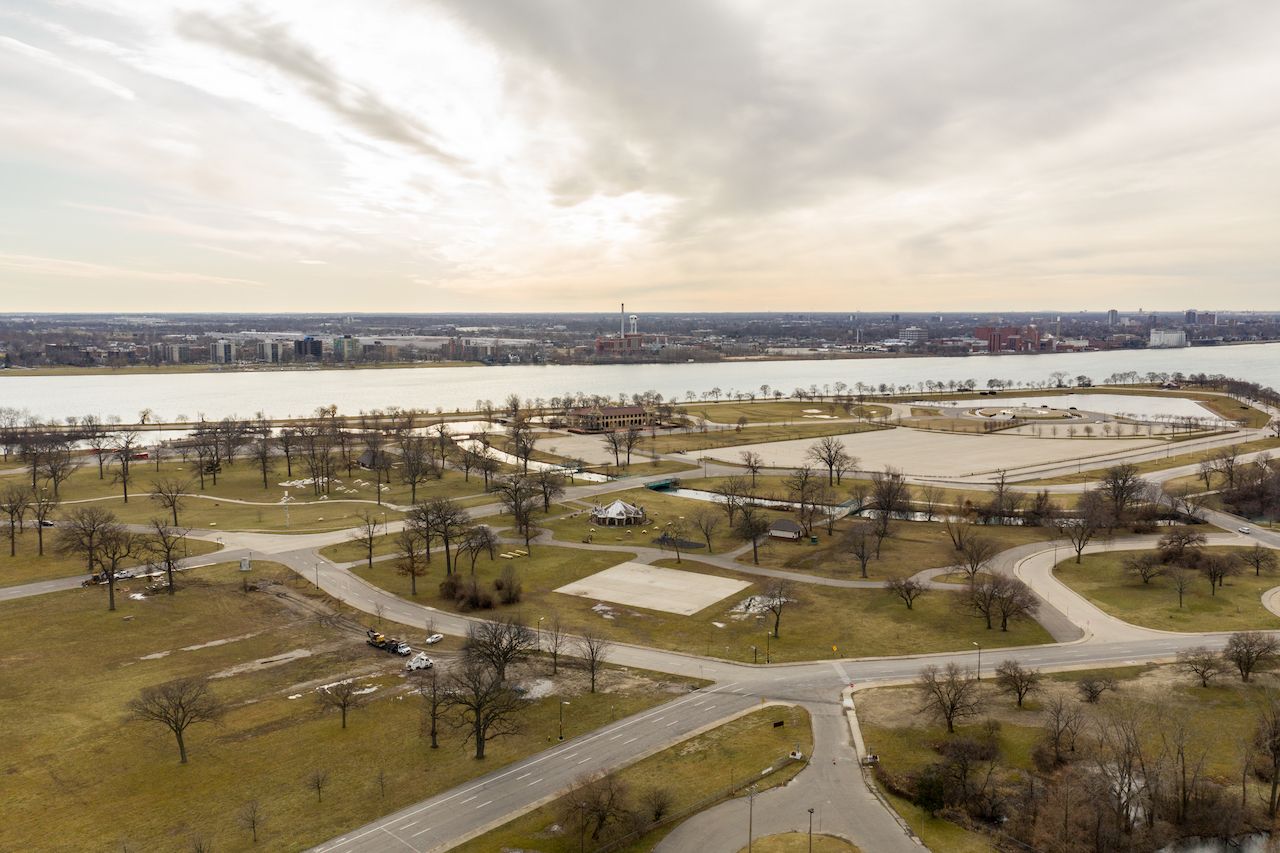 The abandoned Belle Isle Zoo is located on Belle Isle, an island popular with kayakers and beachgoers. The zoo opened in 1895 and was wildly popular for several decades. As time passed, the zoo began to suffer insurmountable budget issues and in 2002, it closed its doors for good. Sadly, the only reminder of the 150 animals that once roamed the grounds are numerous round huts with gray spiraling roofs. The graffiti-covered abandoned zoo is now almost hidden from viewers due to years of overgrowth and neglect but you can catch a glimpse of the animal enclosures, buildings, and metal entrance stanchions if you peek between the fences.

The island itself is also worth a visit to walk through Belle Isle Nature Center, and past that is the also-closed Belle Isle Aquarium. A bridge from downtown connects the city to the island, where as odd as it feels, you’ll look north at the Detroit skyline and south toward Windsor, Canada.

Check out the Riverfront for a taste of Detroit’s pride. 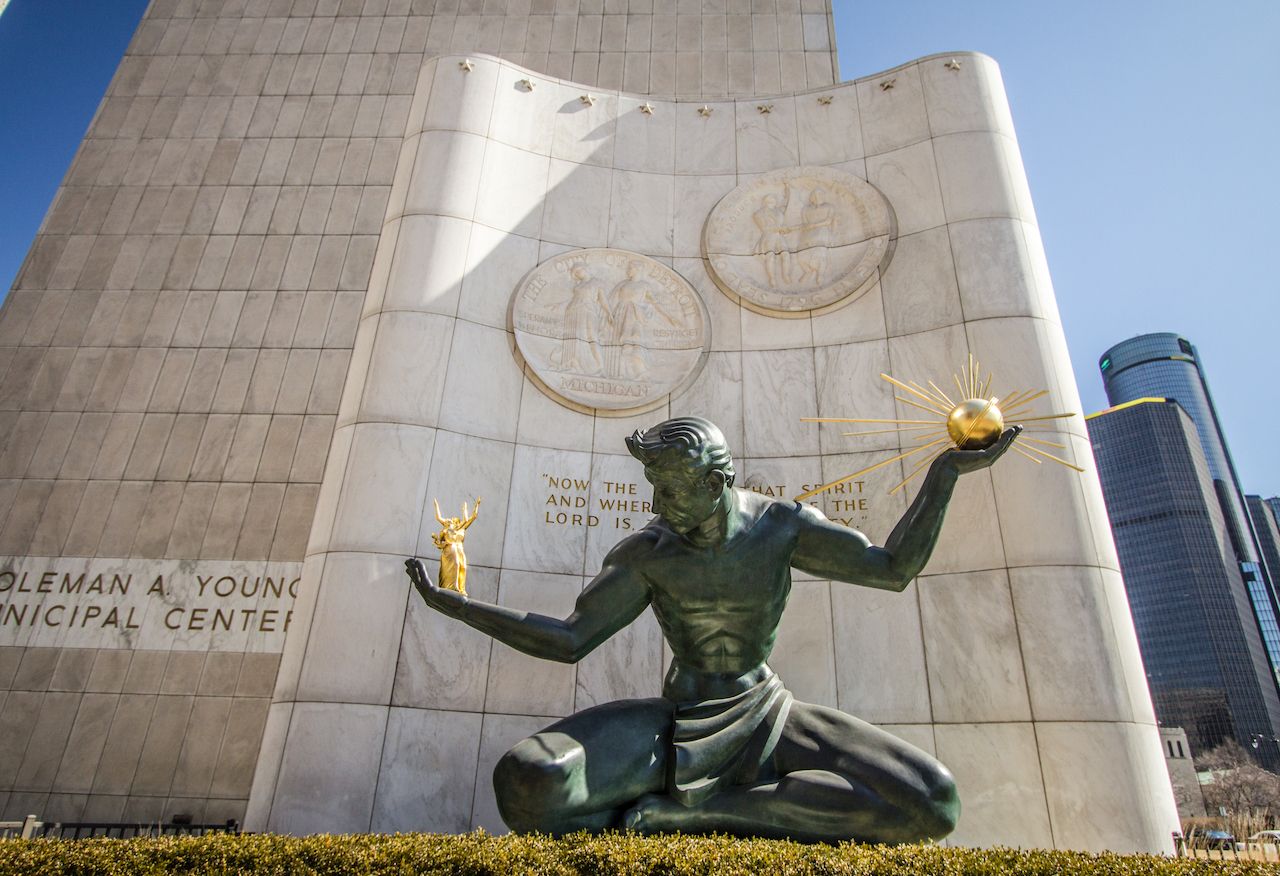 Detroit, despite a half-century of tough economics, has never lost its fierce pride. As a visitor, the best place to feel this passion is to wander Hart Plaza, located near Detroit’s Riverfront. A number of sites are worth stopping to see, beginning with “The Fist,” an imposing 8,000-pound, 24-foot-long bronze sculpture located in the center of Hart Plaza. This impactful artwork was created by Rolf Kriken as a monument to Joe Louis, the world heavyweight champion from 1937 to 1949. Joe Louis was largely regarded as the first African American to become a national athletic icon and became a symbol of the breaking of racial barriers in professional sports.

Then, walk over to “The Spirit of Detroit,” another impactful sculpture located about one block east of “The Fist,” on Jefferson Avenue. The striking bronze figure holds a golden sphere in one hand and a mother and child in the other. As a symbol of God and all human relationships, “The Spirit of Detroit” is emblazoned throughout the city and was featured in a past Super Bowl commercial. The statue is frequently dressed in sports jerseys to provide a little extra luck during games.

See how the city is becoming a model for smart development. 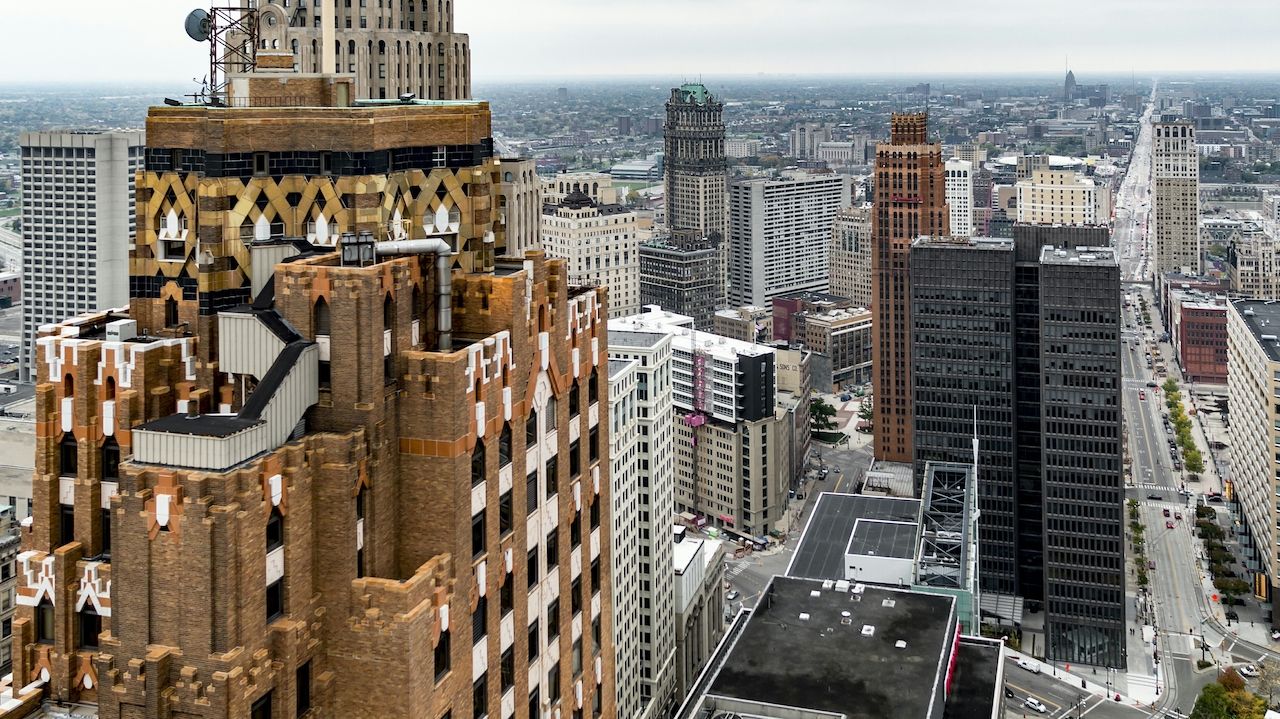 More than $5.1 billion in development projects were underway in Detroit in 2018, according to Michigan news site MLive. You can see the money at work all over the city, with a particular focus on downtown. The new growth spans from Woodward and Grand River avenues through Detroit’s Midtown and surrounding areas. Construction initiatives include Michigan’s tallest skyscraper, several hotels, residential spaces, eateries, a business school, parks, entertainment, and a healthcare facility. Many of these structures were developed in previously abandoned spaces and created thousands of new jobs for the city.

Detroiters are especially excited about the Henry Ford Pistons Performance Center, a $90 million state-of-the-art training center and corporate headquarters located on Amsterdam Street. The Performance Center is now the largest of its kind in the NBA and in addition to being the team’s practice facility, it houses a spacious weight room, full-service kitchen with personal chefs, and media rooms for the players. It is also a phenomenal opportunity for the community as the Performance Center’s grocery (Plum Market), fitness, and retail shops are open to the public.

Experience public art that reflects the soul of the city. 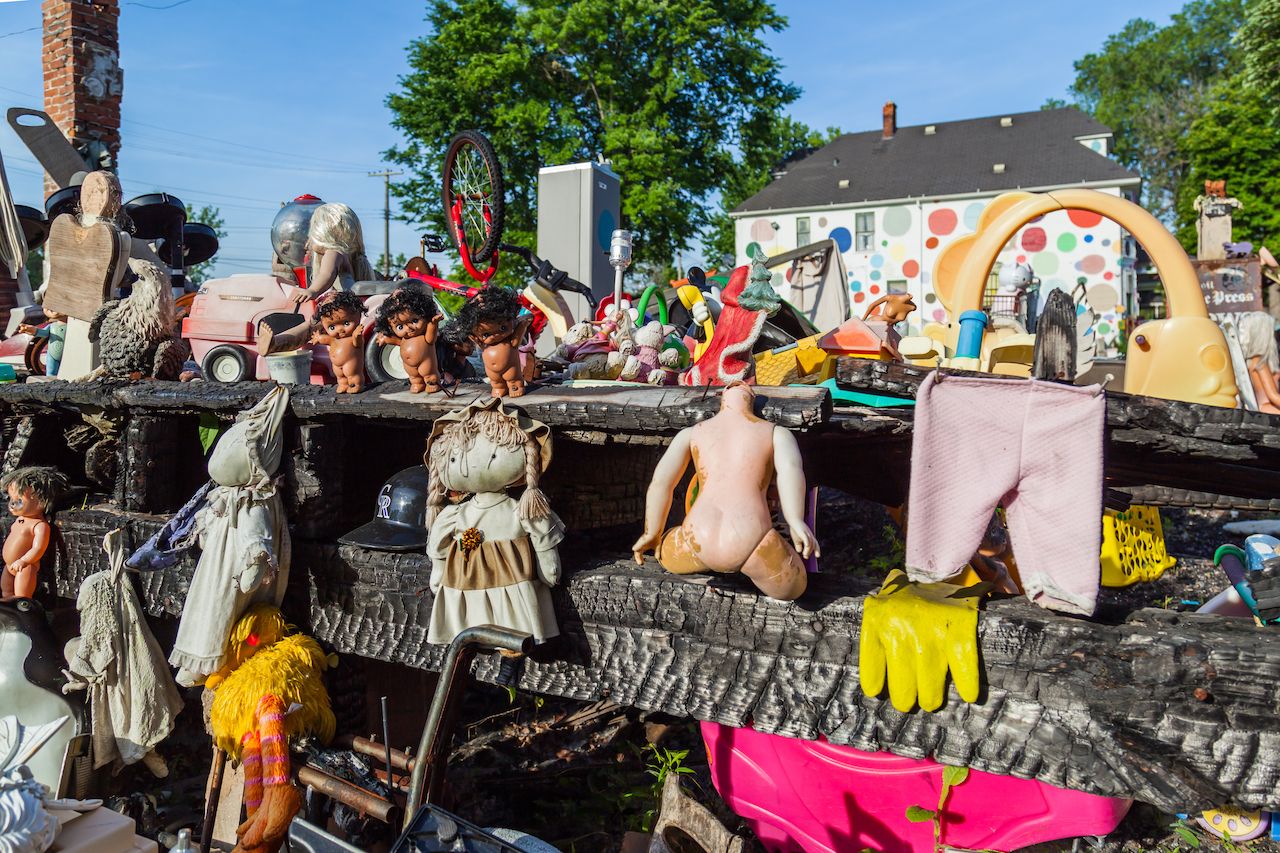 Those with an artistic mind will be profoundly drawn to Tyree Guyton’s famous multi award-winning outdoor art environment, the Heidelberg Project, located on Detroit’s East Side, opened in 1988. Guyton envisioned transforming the vacant lots and abandoned houses in the neighborhood where he once grew up. While wandering among the piles of lonely suitcases dreaming of adventures, you’ll pass a larger-than life Homer Simpson, dozens of forgotten shoes hanging on a fence, a shopping cart filled with old electronics, and a discarded doll that stares back with forlorn eyes. Perhaps the most eye-popping element of the environment, however, is the two-story house painted with huge, colorful polka dots. His vision of the Heidelberg Project is to inspire people to appreciate and use art to enrich their lives and to improve the social and economic health of the community. A sign reads, “We give paint brushes instead of guns.”

Tour an art project underneath an underpass and another celebrating Motown. 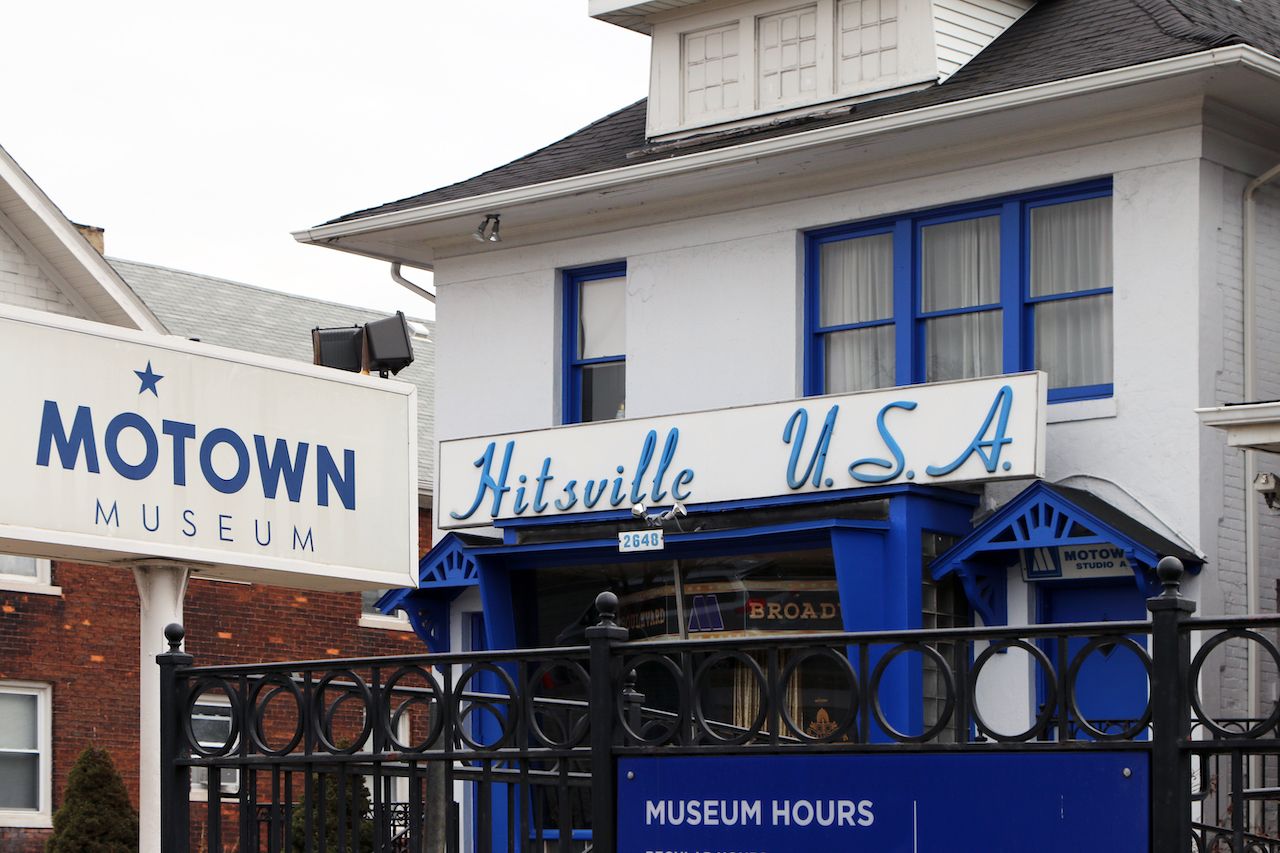 If you are traveling by car or foot near the ill-lit Cass Avenue railroad viaduct, you might question passing through it. Artists Becky Nix and Olek Zemplinski recognized the problem and in 2015 they won a proposal to create a more cheerful and welcoming experience for pedestrians and motorists crossing between the neighborhoods. Entitled “Reflector,” the project transformed the once foreboding and dark underpass into a sea of reflecting light as vehicle headlights shine on the 7,500 reflectors attached to the walls and ceiling.

Hitsville U.S.A., inside the Motown Museum, embodies Detroit’s history, love, and triumph all in one inspiring locale. The museum was founded by Esther Gordy Edwards in 1985 as a destination for music lovers across the US. You’ll stand on hallowed ground in Studio A where artists like the Supremes sang their famous song, “Stop in the Name of Love,” and other greats like The Temptations, Marvin Gaye, Stevie Wonder, Jackson 5, and Miracles and Marvelettes recorded their songs. Some of the original instruments and equipment used in some of Motown’s most famous recordings are still here to admire. No other record company in history created such an influence on popular music and culture with more than 180 number-one hit songs worldwide, which is even more inspiring when noting that Berry Gordy began Motown Records Corporation in 1959 with just $800.

Because Hitsville U.S.A. is such a hit with visitors, the museum is currently in the middle of a 50,000-square-foot expansion project that once completed will include interactive exhibits, performance theater, recording studios, a gift shop, and meeting spaces.

CultureThe 12 Coolest Things To Do in Minneapolis (Even When It’s Freezing)
Tagged
Culture Travel Insider Guides
What did you think of this story?
Meh
Good
Awesome