A product of the automobile-centric culture of the United States, drive-in theaters are classic Americana fodder. In the 1950s and ‘60s, drive-in theaters were all the rage, but they eventually went out of fashion as people downsized their cars and landowners sold off their acres. Plus, when the VCR was invented in the 1970s, it became easier to just watch a movie at home in your living room.

Though drive-in theaters are far less prevalent now, there are still some holdouts across the country. Check out the coolest drive-in theaters in the US that will make you forget all about your plans to lounge around and binge-watch a mindless TV series from the tiny screen of your laptop. 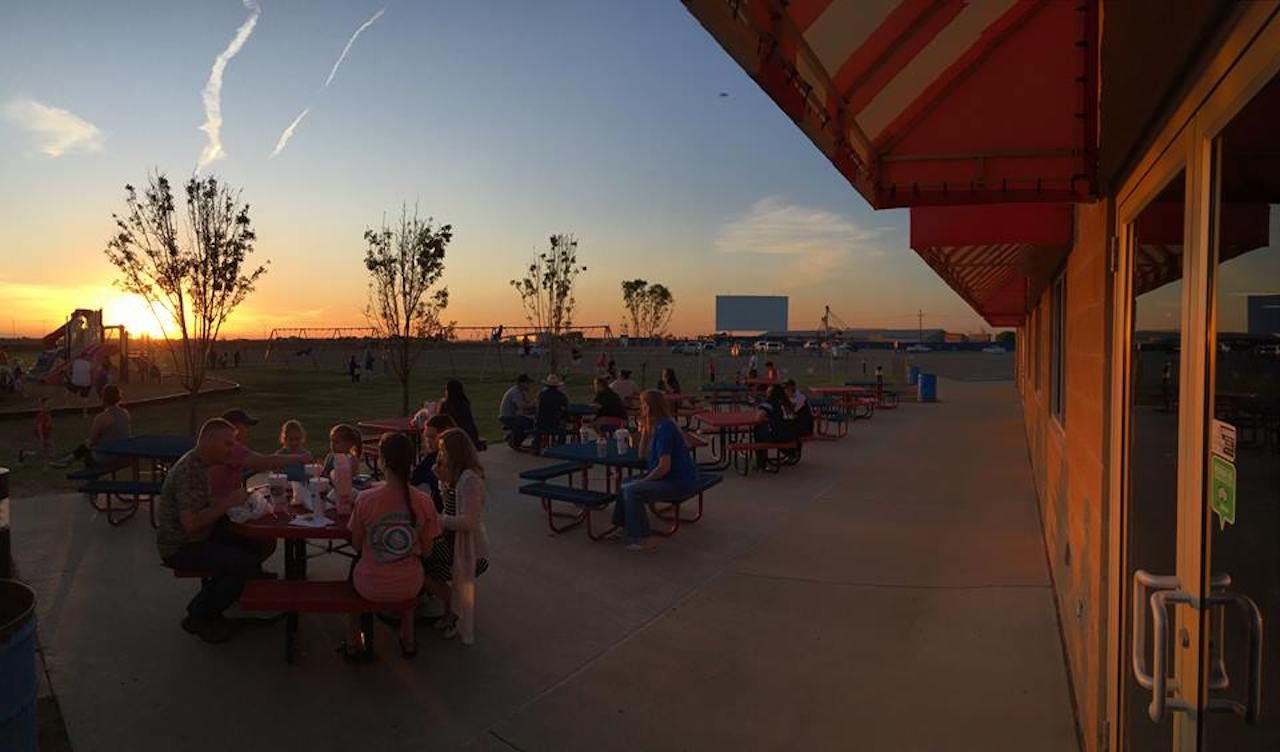 One of the coolest aspects of the Stars & Stripes Drive-In Theatre in Lubbock, Texas, is the ‘50s-style cafe on site. Moviegoers can enjoy Coke ICEEs, burgers, funnel cakes, and fries as if they were hopping over to the local soda shop for “rockin eats and tasty treats,” as the theater puts it. Plus, kids will want to go early to enjoy the theater’s playground and swing set. The Stars & Stripes Drive-In has three screens and is open year-round.

A family-owned and -operated business for nearly three decades, Carlsbad’s Fiesta Drive-In Theatre is one of the only drive-ins open year-round. There’s a concession stand on site with “award-winning” popcorn, pizza, fries, chili, hot dogs, burgers, candy, and drinks. Best of all, it’s easy for locals to make the Fiesta Drive-In part of their regular routine, just like the good old days: Membership to the Fiesta Drive-In Club costs just $10 per month and grants you 50 percent off all your ticket purchases. 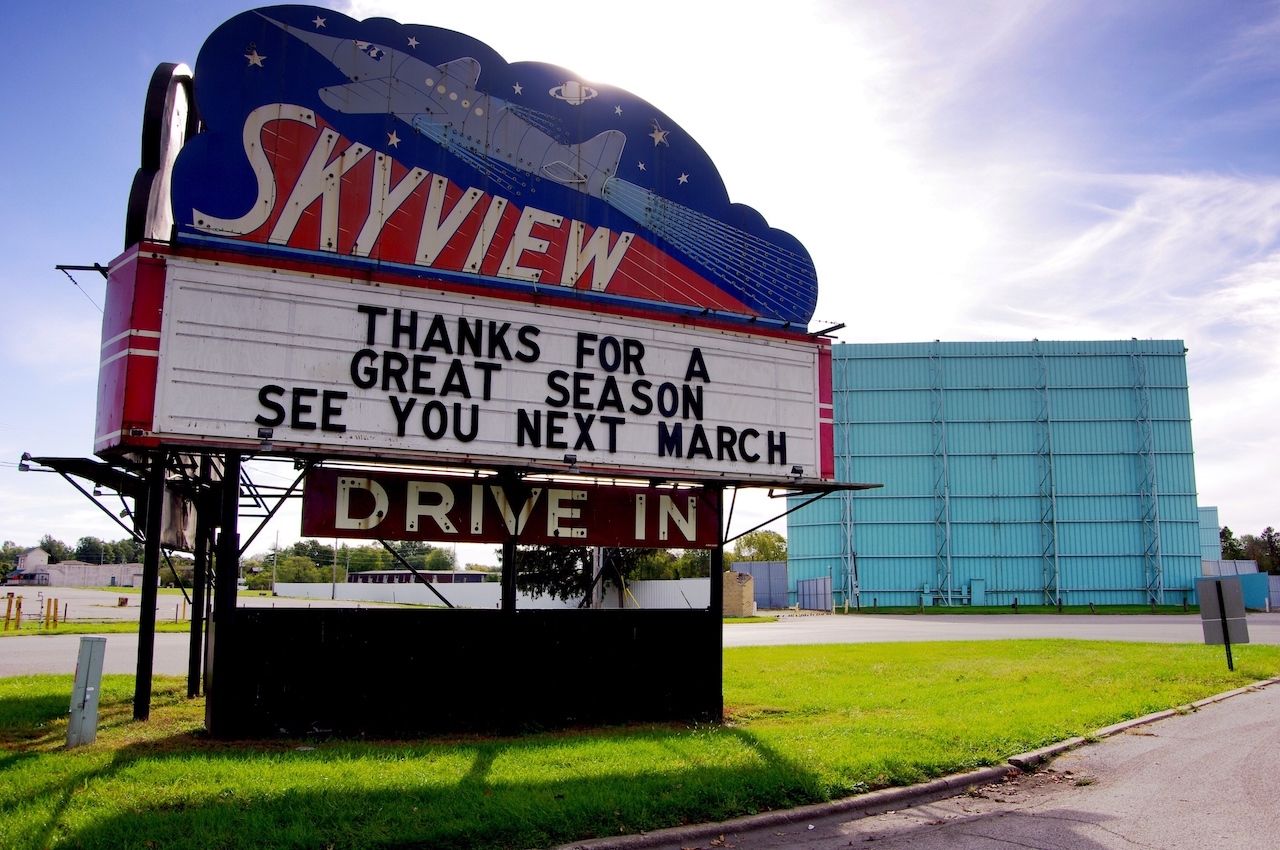 Open on weekends from April to October, the Skyview Drive-In in southern Illinois dates all the way back to the golden age of drive-in movie theaters (and has a website straight out of the ‘90s to prove its commitment to vintage). Opened in 1949, the screen was destroyed by a tornado in the mid-1950s and then rebuilt. If you’re choosy about your view, you can even reserve a prime spot for your car in advance. An antique neon sign welcomes moviegoers and the nostalgic for a night with the silver screen.

The Swap Shop Drive-In in Fort Lauderdale, Florida, does double duty as a flea market and drive-in theater. The swap shop is open 365 days a year, rain or shine, and movies play nightly at 8:30 PM. For vendors who want to clean out their garages, make some money, and catch first-run movie at a bargain price, all in the same day, the Swap Shop Drive-In is the place to be. No vendor reservations are required; you can simply show up, pay at the gate, and hope to drive home with padded pockets. 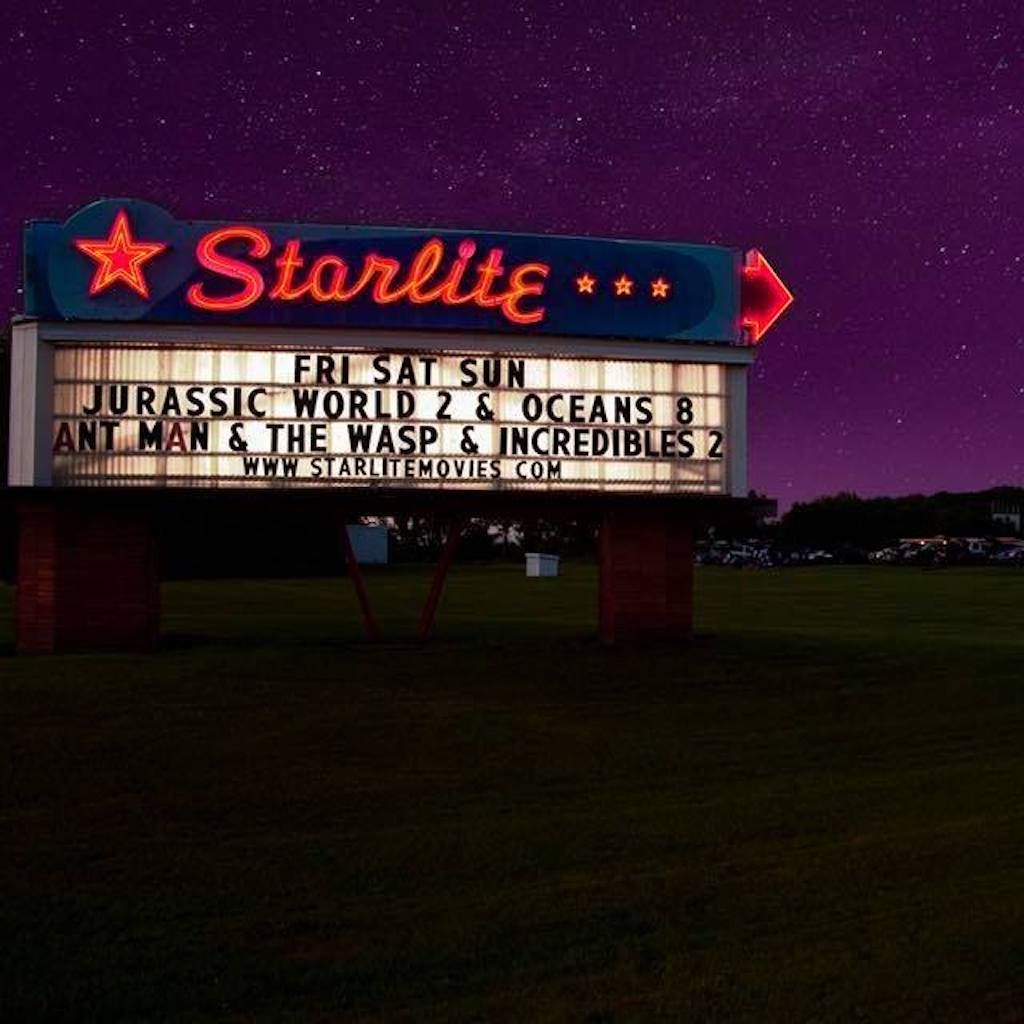 Starlite Drive-In Movie Theater has been a Litchfield, Minnesota, institution for over 100 years — the classic small-town setup opened in 1914. Your ticket grants you access to a double feature, and the original old-style branding makes it feel like you’re being transported back in time. The Starlite Drive-In is open only on spring and summer weekends.

Each of the three screens at the South Bay Drive In in Imperial Beach, California, shows a double feature, so you can be sure you’re getting your nine-dollars worth (tickets are only a dollar for kids aged five to nine). Open 365 days a year, the South Bay Drive In is located just three miles from the beach and is a popular activity in southern California for locals and tourists alike. The drive-in also hosts a weekly swap meet with over 300 vendors, and admission only costs 50 cents to a dollar depending on which day you decide to go.

The unique Art Deco style of Atlanta’s Starlight Drive-In Theatre is only part of the theater’s appeal: There’s also the fact that it plays a wide variety of the latest hit movies rather than just a small selection. It also has a flea market during the day and a snack bar where movie patrons can stock up on movie treats. Located on the outskirts of the city, the theater now has four screens (after starting off with just one) and is one of the few theaters to not just survive but thrive ever since its debut in the late 1940s. 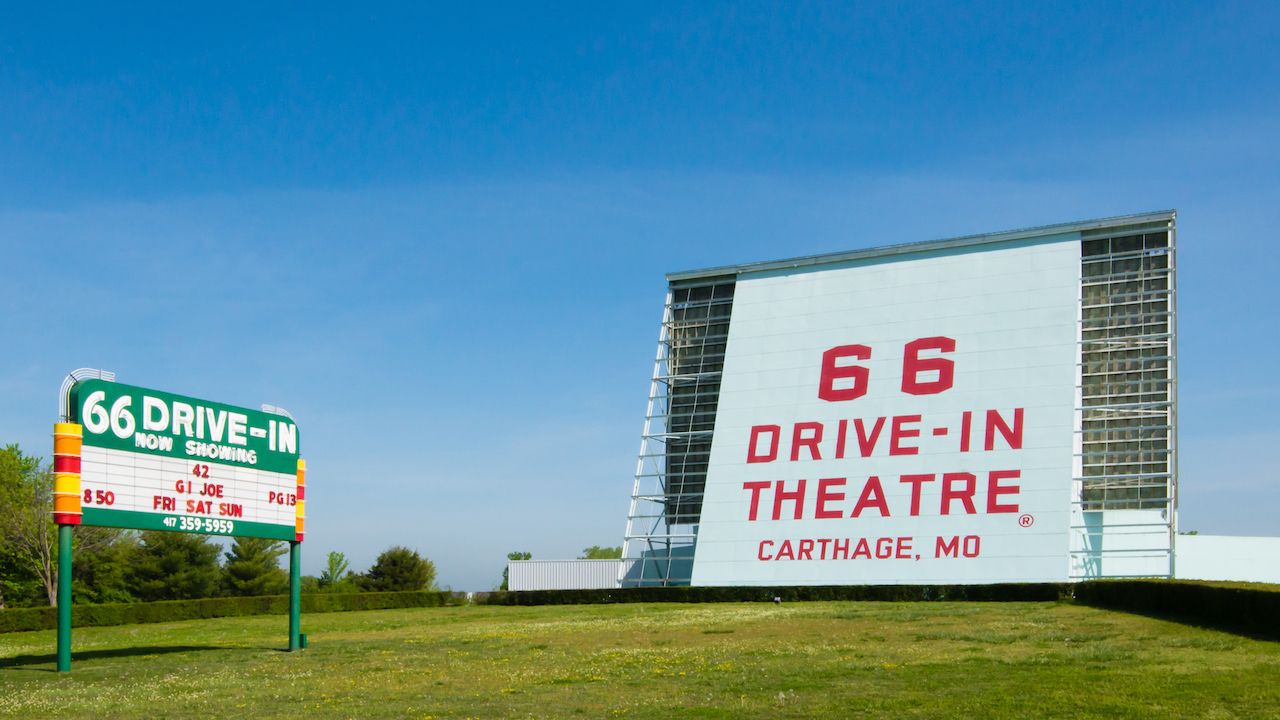 If you’re going for a classic American road trip along Route 66, the 66 Drive-In in Carthage, Missouri, is a perfect addition to your itinerary. Illuminated with a retro neon sign and giant billboard to catch the eyes of passing motorists, the 66 Drive-In also has a concession stand with a large menu of classic American eats, including hot dogs, BBQ sandwiches, nachos, candy, and more. A “nostalgic intermission trailer” is played during the break between the double features to add to the throwback vibes of the experience.

The Malco Summer Quartet Drive In is part of the Malco chain of movie theaters, which has been family-owned and -operated for over 100 years. Open only on weekends, the retro-style drive-in in Memphis offers free admission to kids under 10. In addition, it functions as a venue for other forms of entertainment like operas, concerts, and live performances all year long. 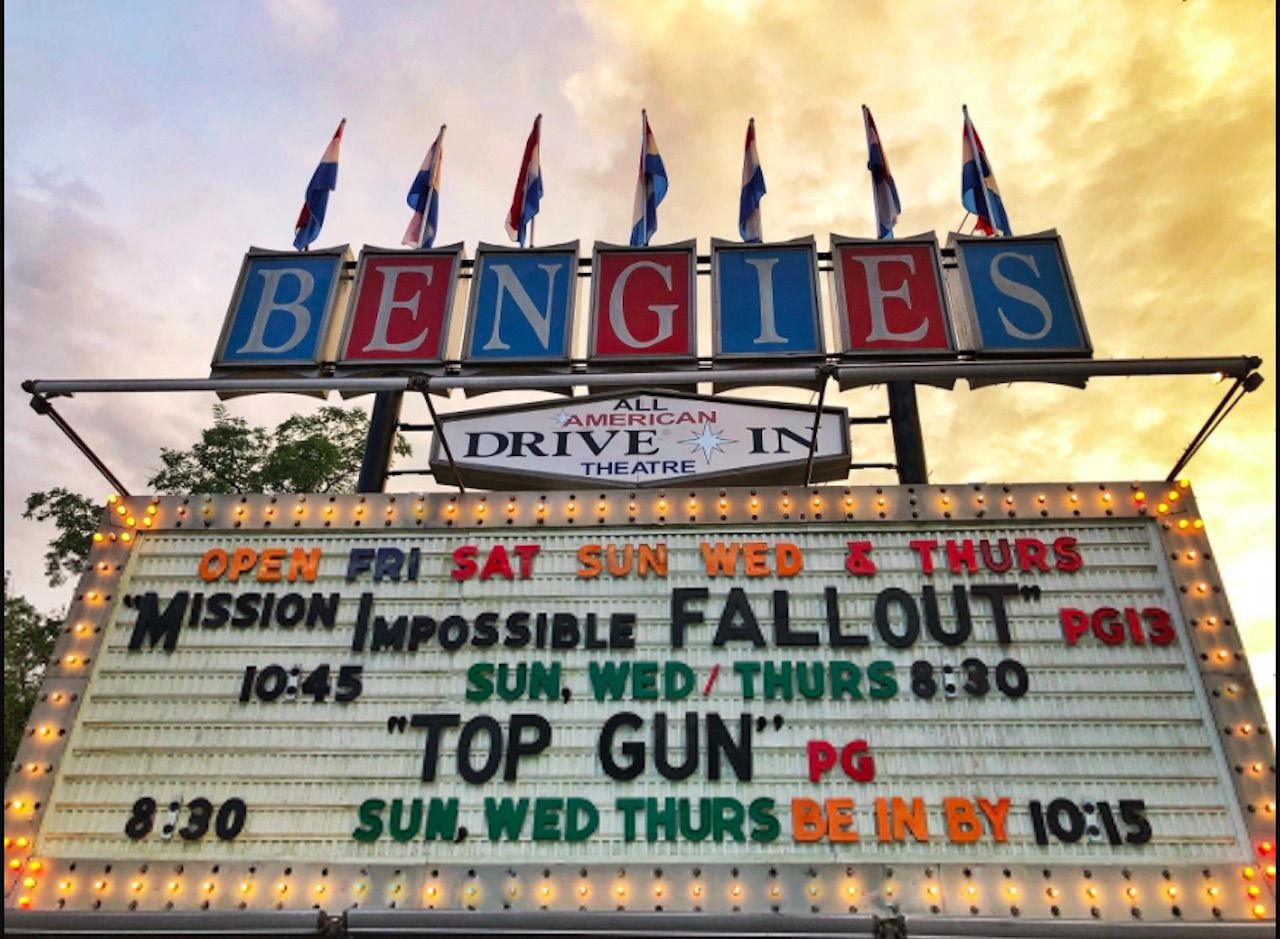 Opened in 1956, Bengies in Baltimore claims to have the biggest movie theater screen in the USA. In true American pride, every show opens with the national anthem. This drive-in is one of the only theaters to screen a triple feature, offered on most Friday and Saturday nights. In between movies, guests are entertained by old intermission clips, classic cartoons, and vintage trailers, not to mention the snack bar and large playground. On Memorial Day and Labor Day weekends, Bengies offers all-night shows from dusk to dawn. The Bengies season stretches from early spring to late fall, and it even rents electric in-car heaters for one dollar if you’re worried about getting too cold.

The Silver Moon Drive-In Theatre in central Florida has a 70-year history, and it’s still going strong. There’s a snack bar with pizza, corn dogs, “chilly dilly pickles,” beers, breakfast sandwiches, and more. Both of the Silver Moon’s two screens show a first-run double feature seven nights a week, which you can listen to via your FM car radio or in-car speakers. 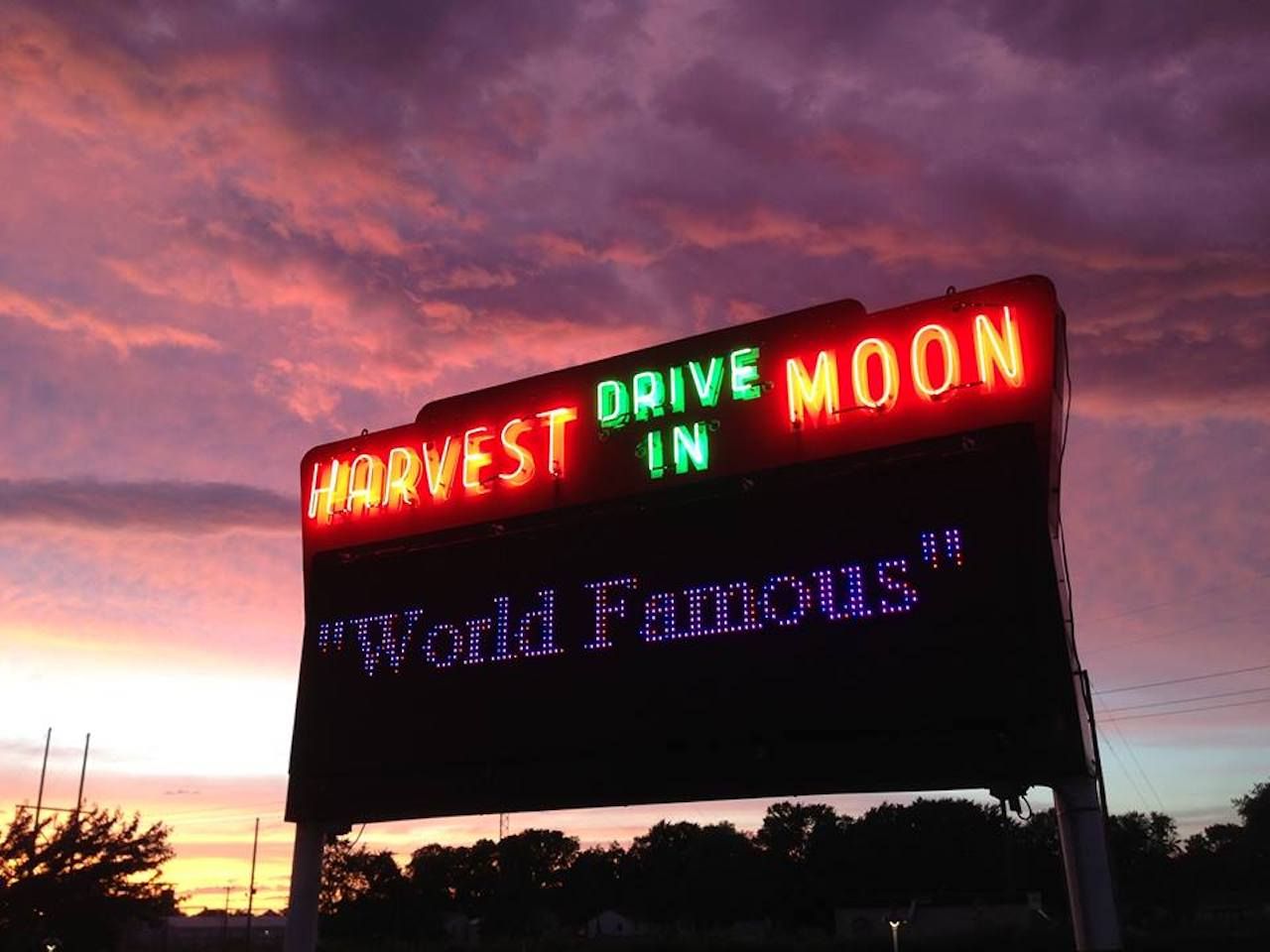 The Harvest Moon Twin Drive-In Movie Theatre not only screens hit movies rain or shine, they also put on special event programming to keep visitors entertained in new ways, such as superhero costume contests, luau parties, a fall FrightFest with horror movies, and more. However, perhaps the most unique part of the Harvest Moon Drive-In is the fact that moviegoers can grill their own food while catching a show (but there’s a five-dollar food permit per car to bring outside food or drink).

The only thing better than heading to a drive-in movie for the night is staying the night at the movies, which Vermont’s Fairlee Motel and Drive-In Theater gives you the chance to do. One of only two motel/drive-in combinations left in the entire country (and the oldest), the Fairlee is a simple, one-story motel where you park in front of your room and get charged by the person and by the bed. You can watch the movie from your car or motel room — the rooms have rear windows with views of the Fairlee Drive-In Theater. Stop by the drive-up snack bar to stock up on hot meals and popcorn with real butter. 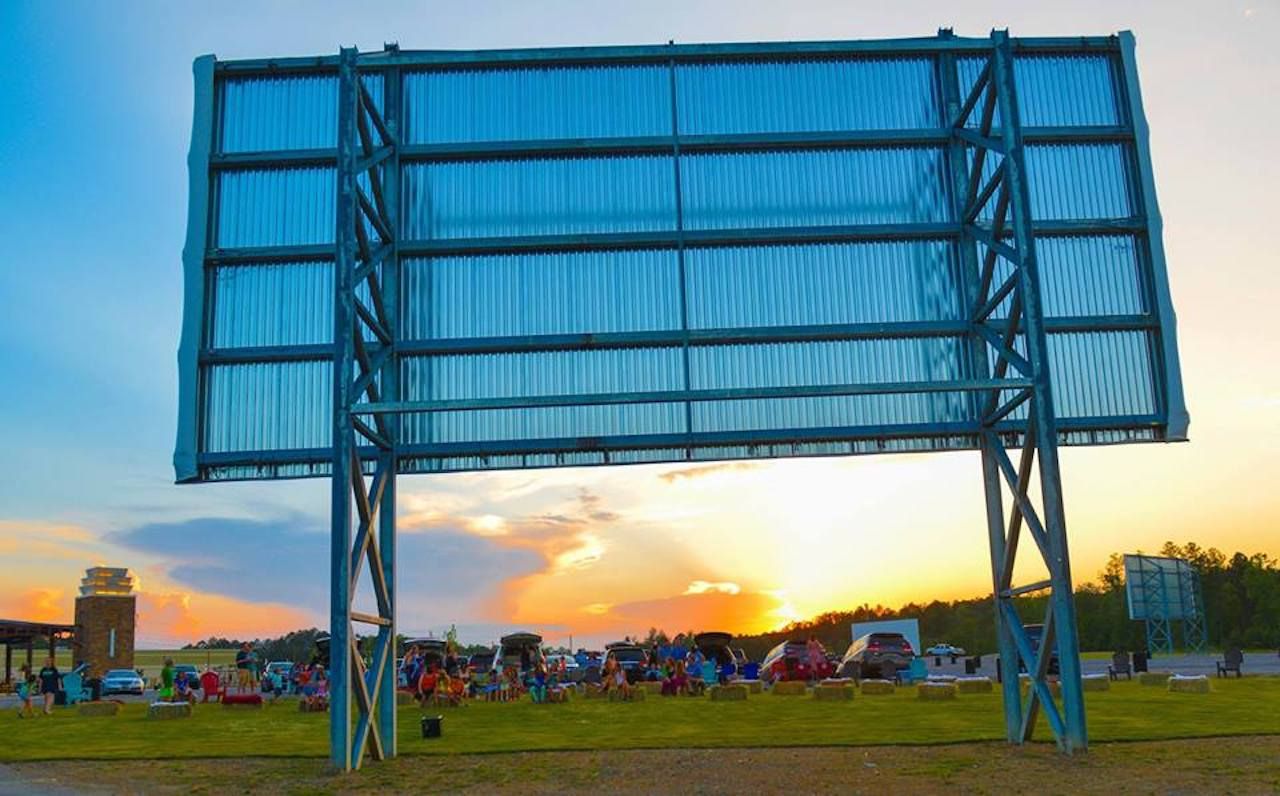 Nothing is more quintessential American than a menu of burgers and hot dogs at the drive-in theater in a small Southern town. For a Friday night straight out of the ‘50s, head to Leeds, Alabama, and hit up Coyote Drive-In. Part of the Coyote Drive-In’s enduring appeal is the fact that you can have an experience just like “the good old days” and enjoy gathering around the latest hit movie with family and friends. The Coyote Drive-In is only open during spring and summer.

An alternative to the usual Cape Cod attractions, the Wellfleet Drive-In Theater in Massachusetts has not just movies but also a mini-golf course, retro snack shop, bar and grill, and a flea market with up to 200 vendors. It’s the ideal one-stop shop for families who want to eat, shop, play, and enjoy some good old-fashioned wholesome entertainment. The drive-in portion is open “from Memorial Day through a little after Labor Day” while the traditional indoor cinema is open year-round.

Culture7 Iconic Cars From Around the World and the Stories Behind Their Popularity
Tagged
Entertainment Insider Guides United States
What did you think of this story?
Meh
Good
Awesome