There’s never been a better time to work abroad. That much is clear from the digital nomad visas that keep popping up, as well as the incentives that destinations are offering to remote workers in places like Arkansas, Iceland, Dubai, and everywhere in between.

While remote work — both domestic and abroad — was on the horizon for many whose work revolves around computers rather than services, the pandemic has quickened the pace. Zoom has become a mainstream work tool, and the thought of getting 100 percent dressed for the day has faded into memory. Finding ways to be productive from home, or wherever home is for the time being, has never been easier.

When it comes to those who can work from home and companies that can continue to operate with a remote workforce, “everyone across the board is winning,” says Moe Vela, a remote work expert and the chief transparency officer of the employee management company TransparentBusiness. “It’s not sensationalism, I think it’s the new normal. I’ve been predicting for seven months now that it’s here to stay as employers are seeing that remote works, and that they have more productive and happier employees. They would be fools to take it away.”

Vela cites a number of factors: The average employer is saving $11,000 per employee, he says, and absenteeism is down. Workers no longer have to lose hours of their day to commutes. The environment benefits from cutting out unnecessary daily drives. The list goes on.

Yet Vela is quick to add that the benefits of a remote workforce have not fallen evenly. Parents who are suddenly tasked with working from home while also teaching their kids are losing out, for example, as are commercial real estate businesses and restaurants that relied on office buildings as a gathering point. Still, there are millions who are able to take advantage of the expanded remote work environment, and many more millions who have the potential to in the future.

“I have gone as far as to predict that an employer of the future who does not offer a remote workforce option in their employee benefit package will be less competitive and will lose out on the most talented people around the world,” Vela says. “I believe it will absolutely be a part of an employee benefit package just like health insurance, just like paid time off, just like sick leave.”

In the not-so-distant future, it’s not inconceivable that working remote domestically isn’t all that different than working remote abroad, Vela says. For many, this is a dream.

We’ll have to wait until traveling is entirely safe, but for people who’ve long wanted to venture out and work in another country for a spell, now is the time to start planning. Here’s what the experts suggest you do before deciding to take the leap and work abroad.

First order of business to work abroad: a work visa

Cepee Tabibian, an American living in Spain and the founder of the women’s travel company She Hit Refresh, found that there are common misconceptions about getting work abroad. When writing her book I’m Outta Here! An American’s Ultimate Visa Guide to Living in Europe, she found the biggest misconception was that finding a job abroad would be easy.

“If you are a foreigner looking to get hired abroad, there is one step that people often overlook: the need for a work visa,” Tabibian says. “While you may be qualified for a position based on your experience and skills, most employers abroad are required to do a market test to ensure there is no local talent who can fill the position. Hiring a foreigner can be an expensive and lengthy process for an employer which means most are not open to the process of sponsoring work visas.”

Without a work visa, there is no working abroad. Tabibian says the European countries that are easier for freelancers and self-employed people to get a visa include The Netherlands, Germany, and France. Spain and the Czech Republic offer long-term English teacher stays, while digital nomad visas in Estonia, Georgia, and Croatia (soon) make those countries easier for remote workers who already have a job.

Don’t forget about your own cultural fit abroad

Work isn’t the only thing to keep in mind. Fitting in with the culture is also important, says Priya Jindal, the founder of Nextpat who has worked abroad as a fellow with Indicorps and has worked in Africa and Asia for the US government.

“While some people may mean finding a culture that is akin to your own and working there, culture fit is really about a mindset,” Jindal says. “It’s about learning how a culture deals with conflict, how it communicates, and how that shows up in your workplace.”

The right cultural fit can make or break your experience working abroad.

“One thing to figure out is if you have some perspectives or ways of being that will not work in another society and you are unwilling to adapt those to find harmony in a new place,” Jindal says. “If this is the case, then you would want to seek out cultures that appreciate those behaviors and pursue work in those places. So, for example, if individual credit and recognition is very important to you and it’s hard for you to cede credit or even recognize a team above yourself you may want to find work in a more individualistic instead of collective society. If you’d like to pursue that as a goal – growing into someone who can do both – you may find a culture that addresses both and seek to start growing to adapt to a more collectivist culture.”

Jindal suggests taking an assessment like Philipe Rosinski’s Cultural Orientations Framework to find your cultural disposition. Overall, every company is different and it’s on the person moving abroad to make sure they can adapt.

Do your research on available Wi-Fi

It’s difficult to be a digital nomad if you can’t get online. Tools like the website WiFi Map can help you find trustworthy and safe places to connect. Some of the most important things to remember is to avoid working with private or sensitive information when using publicly available internet. Only use HTTPS sites, and when possible, use a virtual private network (VPN) connection.

According to data for WiFi Map, the top cities for free Wi-Fi hotspots are Singapore, Seoul, Moscow, New York, London, and Tokyo. Germany has some of the most secure public Wi-Fi among Western European countries with nearly 85 percent of access points protected by WPA or WPA2 encryption. WiFi Map also notes that at least 63 percent of connections are secure in 12 countries: Japan, Canada, Argentina, Peru, Spain, Sweden, Kazakhstan, Saudi Arabia, Iran, India, Australia, and Poland. 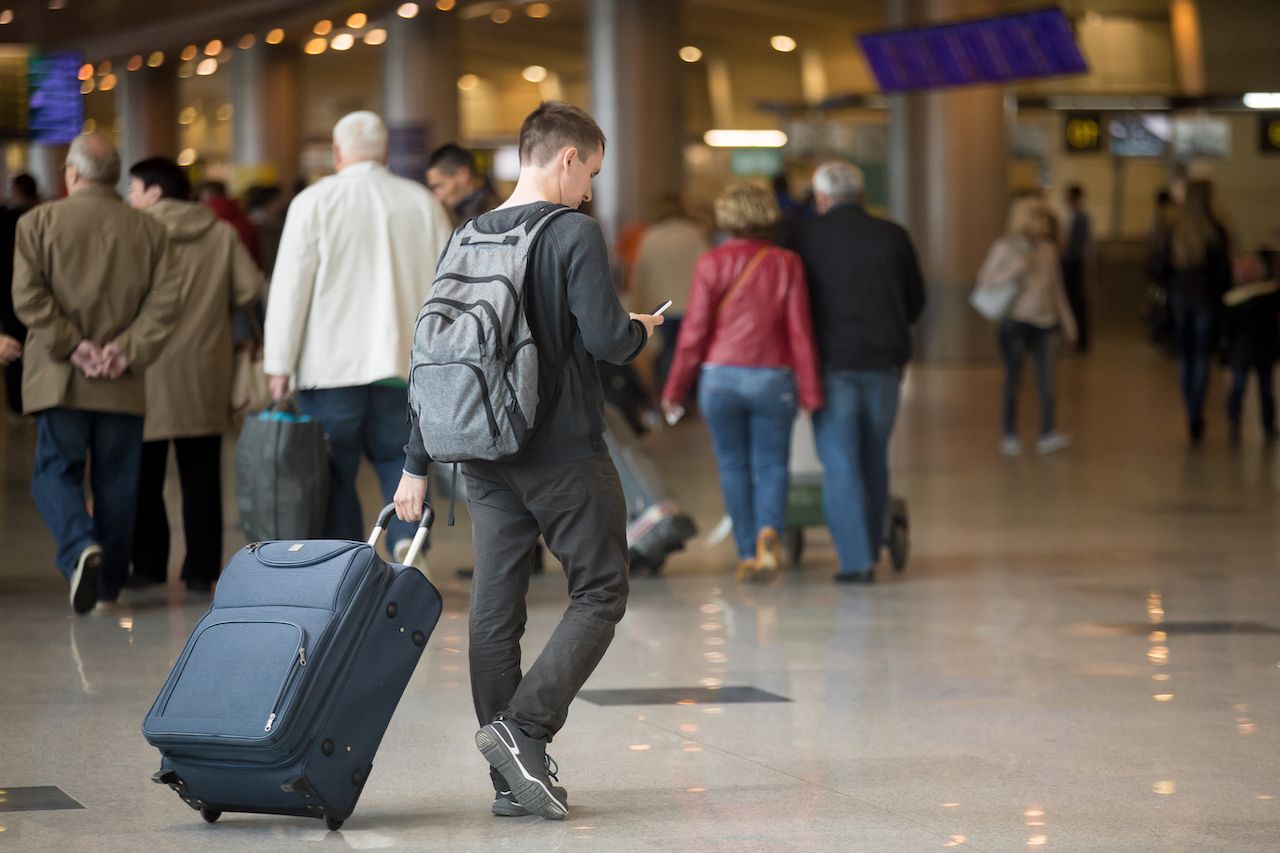 Once you decide you want to work abroad, you’re not limited to picking one place and sticking with it. Alex Davis, the co-creator of the fitness and nutrition site Ryan and Alex Duo Life, has lived and worked in seven countries — Ecuador, Argentina, Peru, Colombia, Panama, Costa Rica, and Mexico — in the past three years.

“While there are some clear similarities — mainly that they are all Spanish-speaking countries — we still had to ‘start over’ whenever we moved,” Davis says. “But with each move, we honed in on our process of finding a rental property, choosing a cell phone plan, upgrading the internet, learning how to pay the bills, and finding a community and network.”

Davis adds that it gets easier with experience once you’re familiar with what you need to look for. The internet speed is one of the most important for digital nomads to pay attention to. Even countries with fast Wi-Fi speeds can have gaps in rural areas. In their experience, Medellin, Colombia, was the easiest place to work abroad thanks to a high quality of life, fast internet, and an accessible international airport. Shanghai and Playa Coronado, Panama, were on the easier side as well. More remote towns in Argentina and Costa Rica proved to be harder to adjust to, however, due to accessibility and internet speeds.

You have to pay taxes in the US even when abroad

“Really the thing that makes taxes a hassle abroad is the American taxes,” says Grace Baldwin, a freelance copywriter who’s lived in the Netherlands for almost four years. “The US is one of the few countries in the world that actually taxes citizens who live abroad. So my earned income in the Netherlands counts as taxable income in the US. The Netherlands has a treaty with the US that eliminates double taxation up until a certain pay level, but after you pass a threshold you have to pay double taxes.”

As with pretty much everything else in the US tax system, giving the government your money is more complicated than it needs to be — even when you don’t live there. The rules are guided by the 2010 Foreign Account Tax Compliance Act, and a careful reading of the IRS site should be on the checklist of anyone who wants to work abroad.

“Get your financial house in order before you move abroad,” Baldwin says. “You’ll want to consult with wealth management companies who know the ins and outs of international financial law. You’ll also want to find a great tax specialist in the country you move to. I found my accountant through the Americans in the Netherlands Facebook group and am so thankful.”

Opt for a tax specialist

Finding a bank that makes life easier for expats is an important step to take. HSBC, for example, has many dedicated resources for expats, including tax guides, wealth insights, online banking capabilities, and a fraud and security help center. The bank’s Expat Explorer Survey is also a great resource for people who are weighing different countries by values, money, and lifestyle.

Kristin Addis of Be My Travel Muse has worked in Germany as a freelancer for four and a half years. Due to the many tax hoops to jump through on her freelance visa, she invested in professional help — something that’s expensive, but worth it.

“I spent a lot on accountants in Germany and the US because as a freelancer your taxes are going to be more complicated and it’s not worth the headache of dealing with it in a country with complicated tax rules,” Addis says.

The consequences of not filing the proper taxes can follow you even after you’ve moved back home.

“When working abroad, you’ll still need to file your taxes with the US IRS,” George Birrell, a CPA and founder of TaxHub, says. “Many people seem to not realize this and they end up paying for it later. When you work abroad, you’ll likely only have to pay tax for the location that you’re working in depending on what your income is. However, if you don’t file with the IRS, they won’t know that you paid tax for the income earned in that location. You’ll therefore end up being taxed by the US IRS in addition to the taxes you paid to the other country.”

Expat LifeThe 21 Best Digital Nomad Visas From Around the World
Tagged
Expat Life Travel Jobs
What did you think of this story?
Meh
Good
Awesome