Italy’s varied landscape lends itself perfectly to exploration by scooter, or a Vespa if you really want to look like an Italian local. Its hairpin coastal roads, gentle hills, and mountain passes are best appreciated on two wheels, not stuck inside a car, and scooter riding gives you the freedom to stop off spontaneously along the way. Here are some itineraries from around the country that take you over mountain ranges in the Alps, around rocky coastlines in Puglia, and through rolling, verdant landscapes in Tuscany. And being Italy, there’s always a curious hilltop village, local restaurant, or country villa for pit stops on the way. 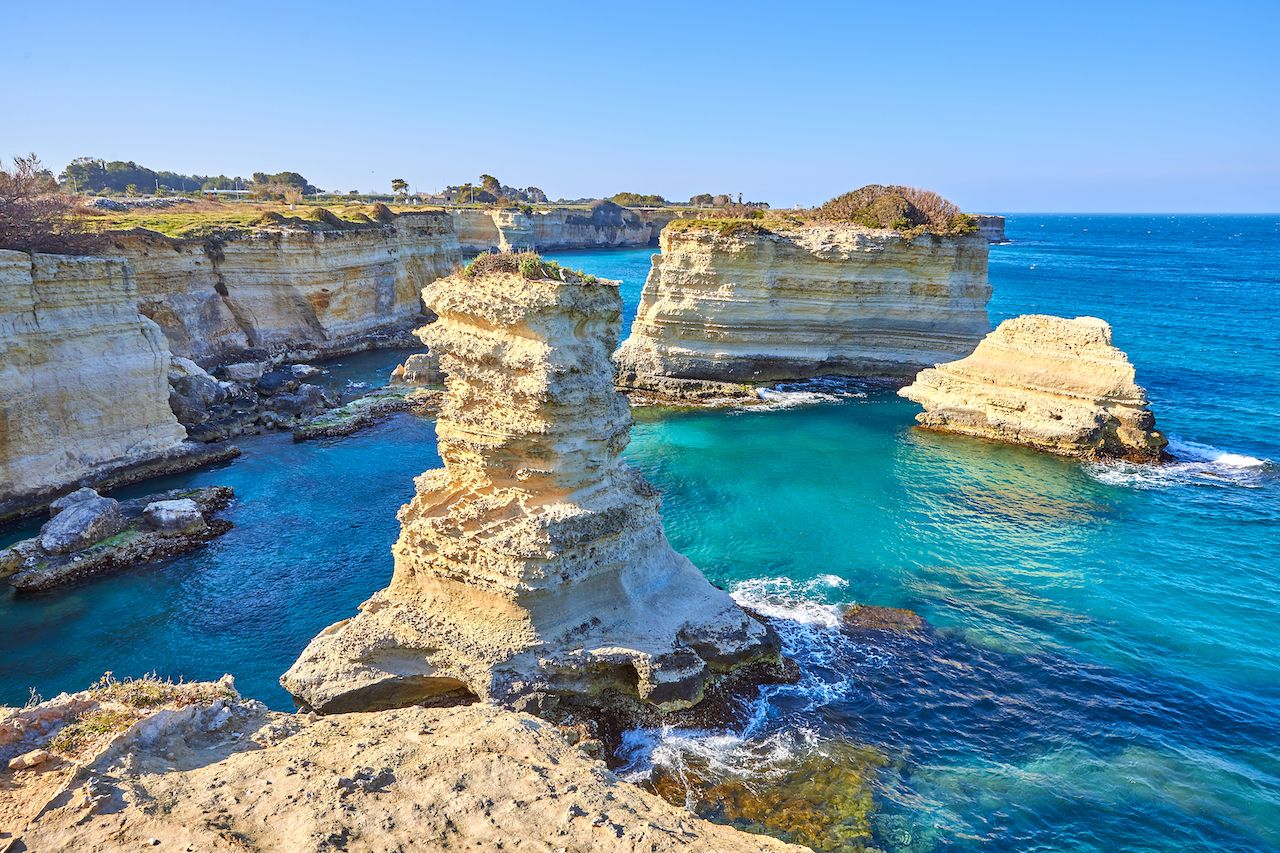 At the very base of the stiletto heel of Italy’s boot lies the area of Salento. Its coastal roads can make for a three- to four-day trip, allowing plenty of time for exploring sea caves and eating fresh seafood. Start from San Cataldo on the east and head south down the eastern coastline. This side of Salento’s coast is characterized by dramatic cliffs, rock formations, and grottoes. Stop at Grotta della Poesia, a natural swimming pool formed by erosion, and Sant’Andrea with its monumental rock formations and sea arches. Continue down to the most southern point of Puglia, Santa Maria di Leuca, and then back up the west coast, which is dotted with sandy beaches like Le Maldive di Salento. Finish in Gallipoli, a town protruding out into the sea, and make sure you try the local specialty — raw red prawns of Gallipoli. 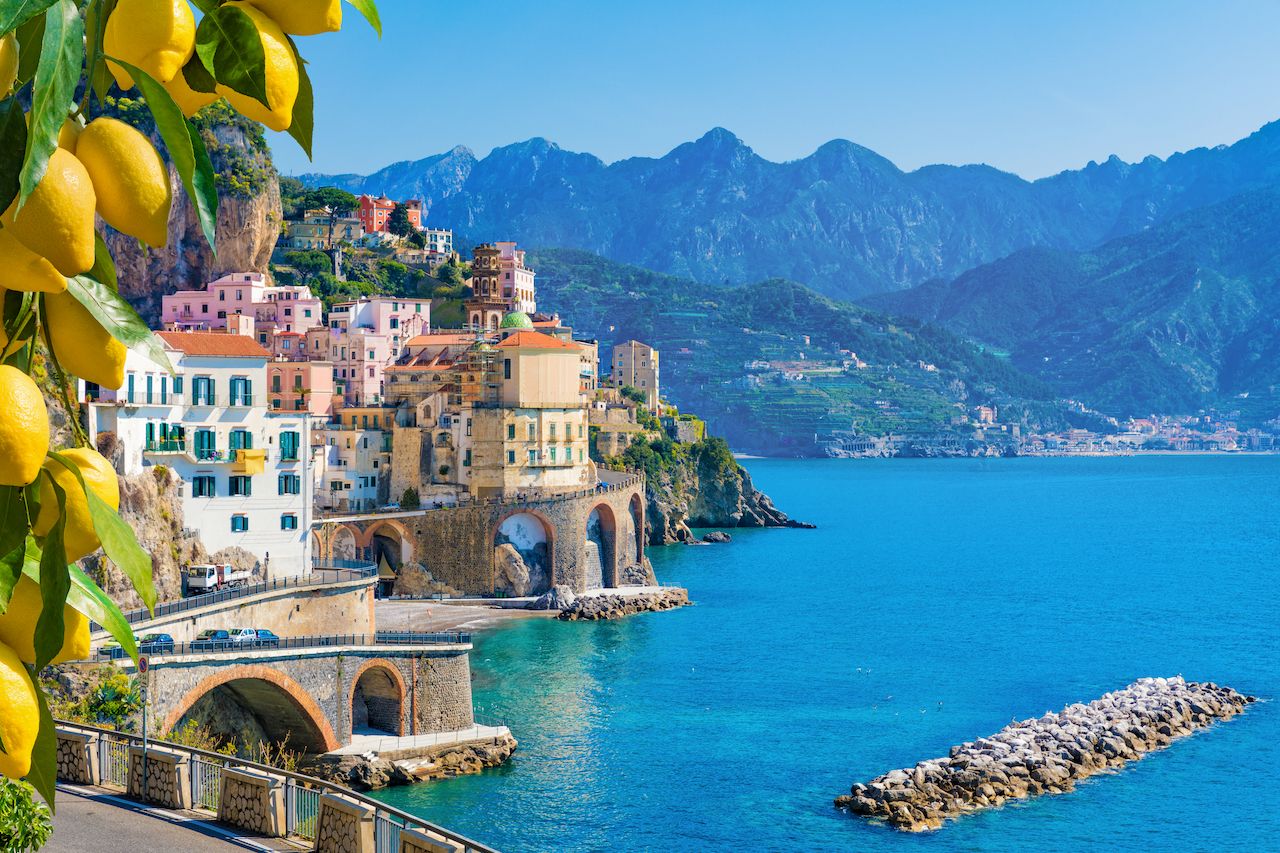 Unlike the Salento coastline, this route is not for the inexperienced rider or anyone with vertigo. This stretch of road along the beautiful Amalfi Coast is an exhilarating combination of hairpin bends, dizzying views down to tiny sailing boats far below, and battles with local buses that careen along at terrifying speeds. Start in the town of Positano. Admire the bougainvillea bedecked streets, but if it’s high tourist season, don’t stay too long. Carry on to Furore, a village of a few houses and vineyards on terraces rising vertically up from a fjord, and on to Conca dei Marini, a village surrounded by lemon groves with a sort of natural terrace that overlooks the sea. Amalfi, once one of the Four Maritime Republics of Italy, is very attractive but also very busy. Pause in Ravello, instead, to enjoy the Villa Rufolo gardens and finish in Vietri sul Mare, the heart of the Amalfi coast production of bright, artistic ceramics and home to the Museum of Ceramics. 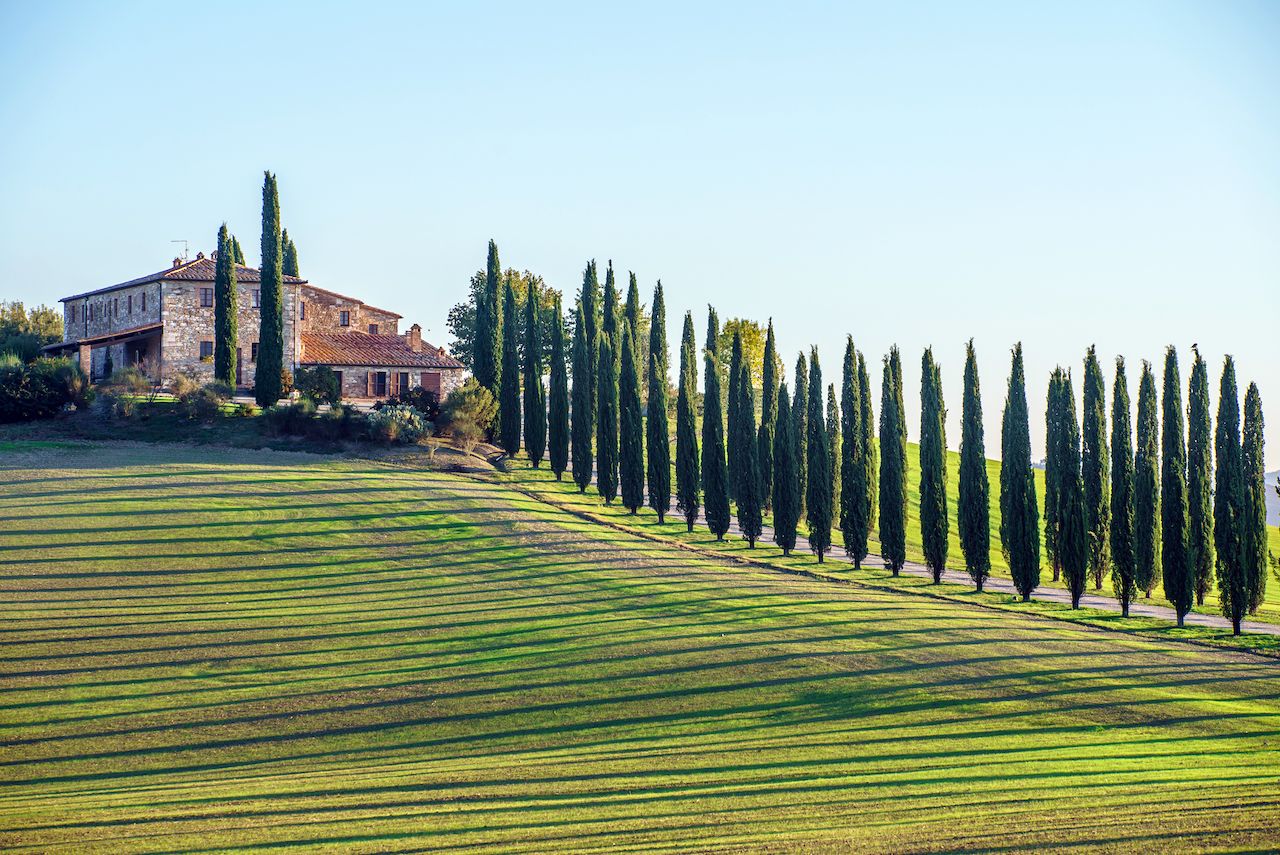 When it comes to Italy’s most popular tourist region, Tuscany, it is almost a prerequisite that you go around by scooter or motorbike. A car just feels cumbersome. With lots of small roads and tracks through the countryside, you can avoid traffic and go scenic. The southern area of Tuscany provides several days’ worth of natural and man-made attractions to pepper your days of riding. There are three natural hot springs here. Saturnia features white terraces of iridescent blue pools while Bagni di San Filippo has dramatic white cliffs of built-up calcium deposits. Bagno Vignoni is a town whose main piazza is actually a large rectangular pool of thermal water. Visit the hilltop towns of Montepulciano, for excellent wine and leather goods, and Pitigliano, whose houses built on a rocky outcrop sit above a network of underground caves. 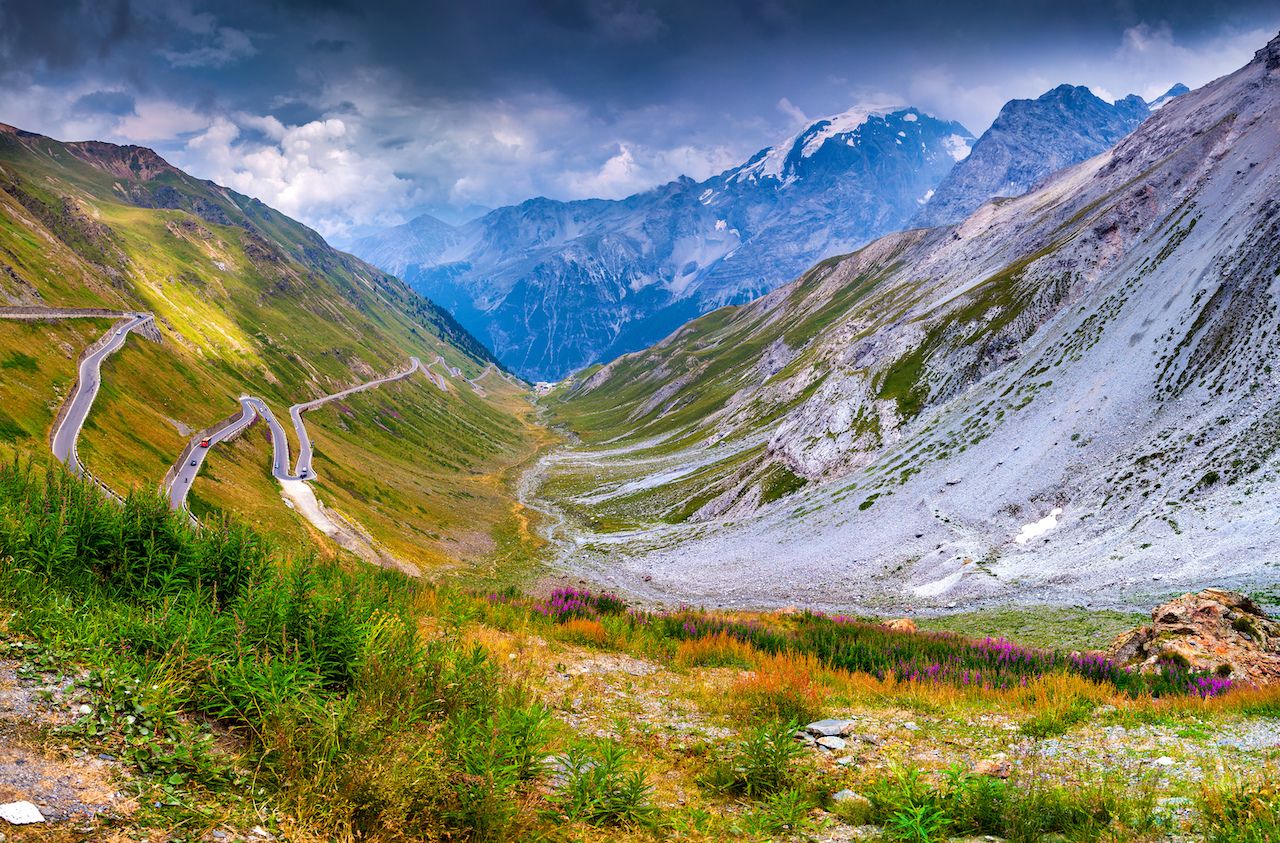 Focusing more on the experience of driving itself, the Stelvio Pass, or SS38, connecting Bormio to South Tyrol is known as one of the greatest driving roads in Europe. Its series of electrifying bends that zig-zag mercilessly down the southern side, or as Top Gear’s Jeremy Clarkson puts it, “15 miles of asphalt spaghetti draped on an Alp,” is one of the most famous images of the road, though the other side of the pass is often preferred by motorcyclists as it’s less crowded with cyclists and tourists. Be careful of another kind of traffic, though, in the form of mountain goats. If you take your eyes off the road for a second (that’s all you get), you’ll see thrilling drops over the side and sheer rugged mountains above. At the top, there is a viewpoint and a stand selling sausages, an essential part of the Stelvio experience. 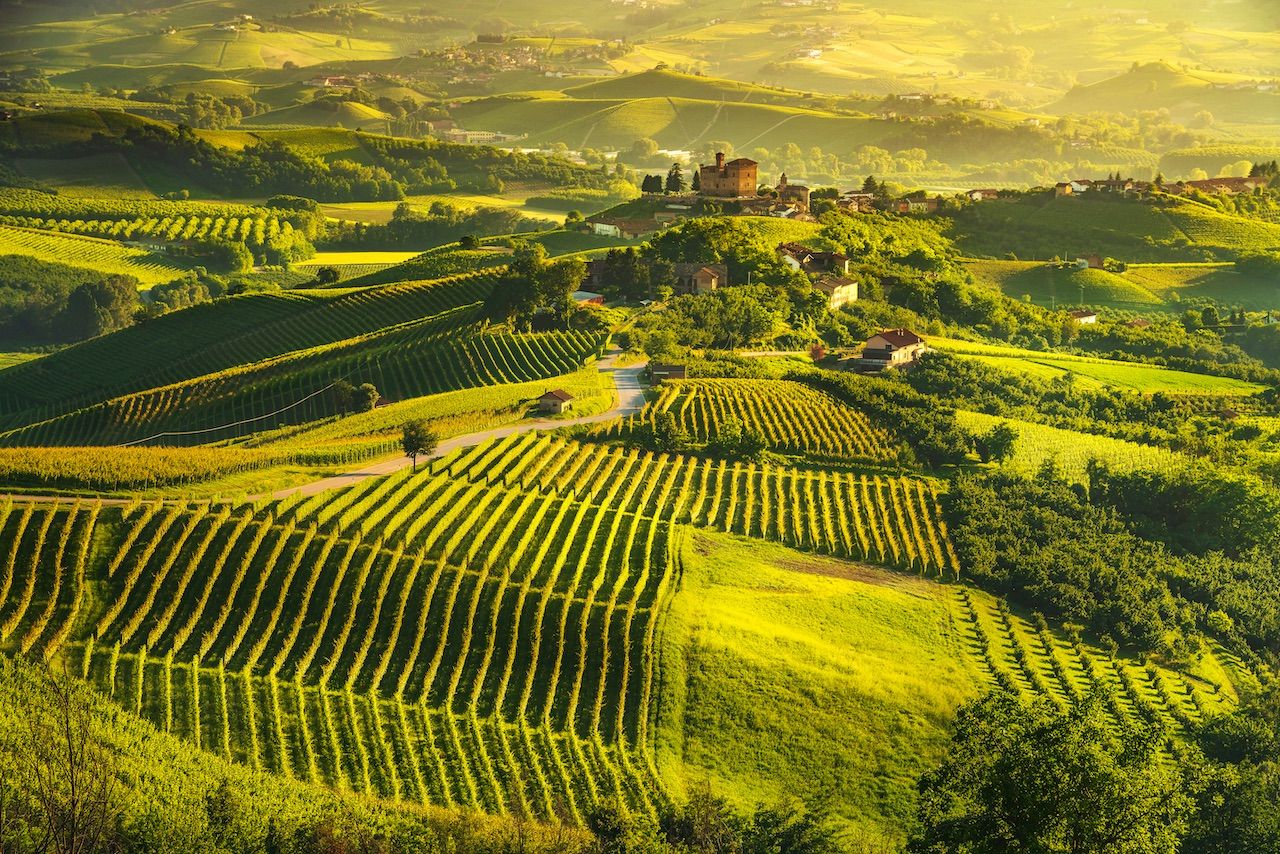 Still in the north, but to the extreme west, the Langhe area of the Piemonte region is usually highlighted for its gastronomic merits, as it is the land of white truffles and hard-hitting wines like Barolo and Barbaresco. But it is also crisscrossed with well-tarmacked, meandering roads that wind through verdant vineyards carpeting the hills. The landscape has been given UNESCO World Heritage status for the preservation of its winemaking culture, described as “an archetype of European vineyards.” A slow ride through this artistically cultivated landscape passes towns like Alba, the home of the truffle, and Neive, voted one of the “most beautiful villages in Italy.” 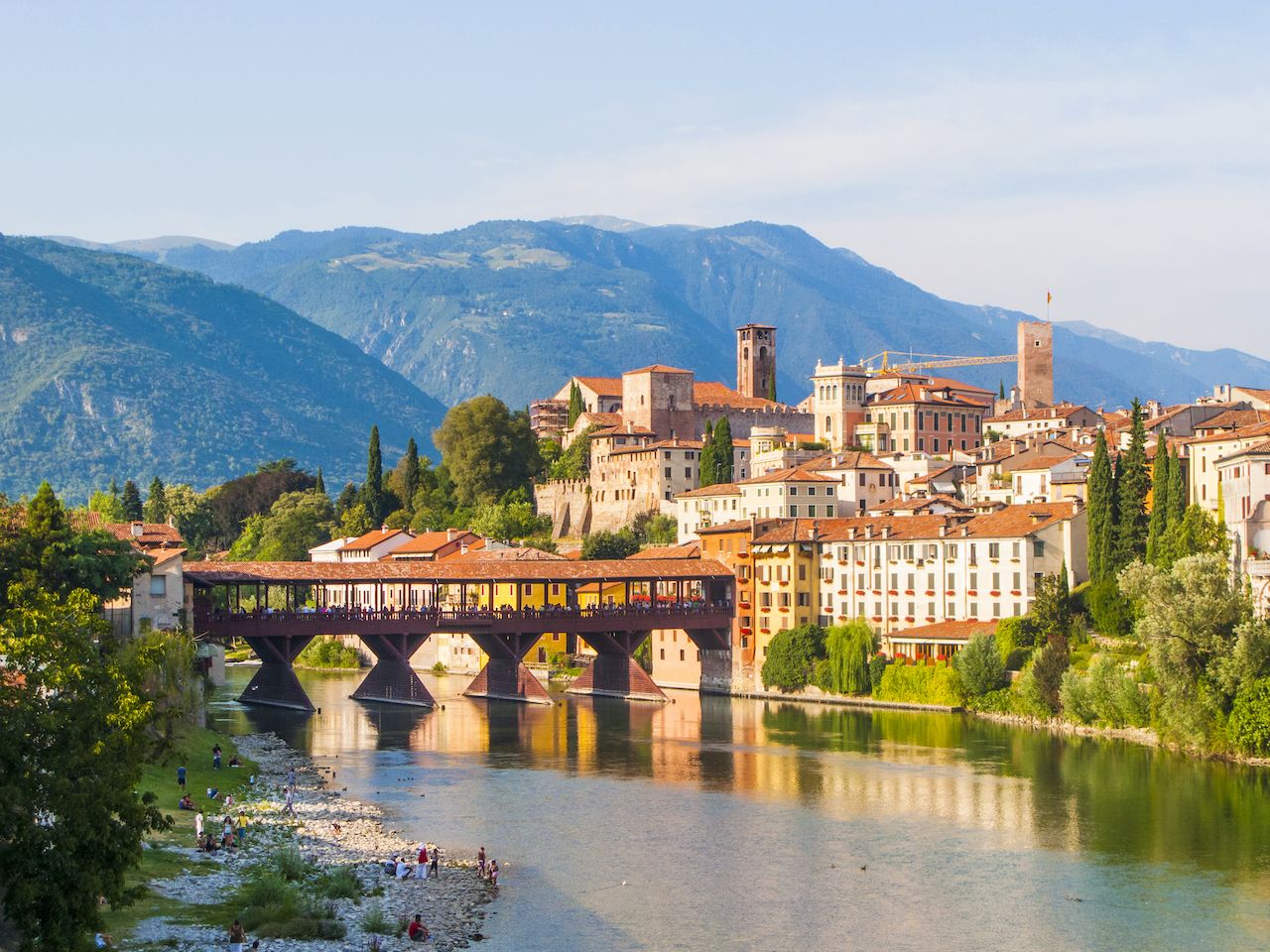 For a short day trip, instead, bikers can look to the Riviera del Brenta in the Veneto region. The River Brenta connects Venice on the sea with the city of Padua inland. Along the stretch of river are a dozen elegant villas that were the country houses of various Venetian nobility. A pleasant day can be had pottering along the road following the river and stopping at some of these prestigious houses. The most famous is probably Villa Pisani at Stra. It boasts 114 rooms, the largest of which features a ceiling by 18th-century painter Tiepolo. It has spectacular gardens with a maze, and it was once owned by Napoleon for a while. 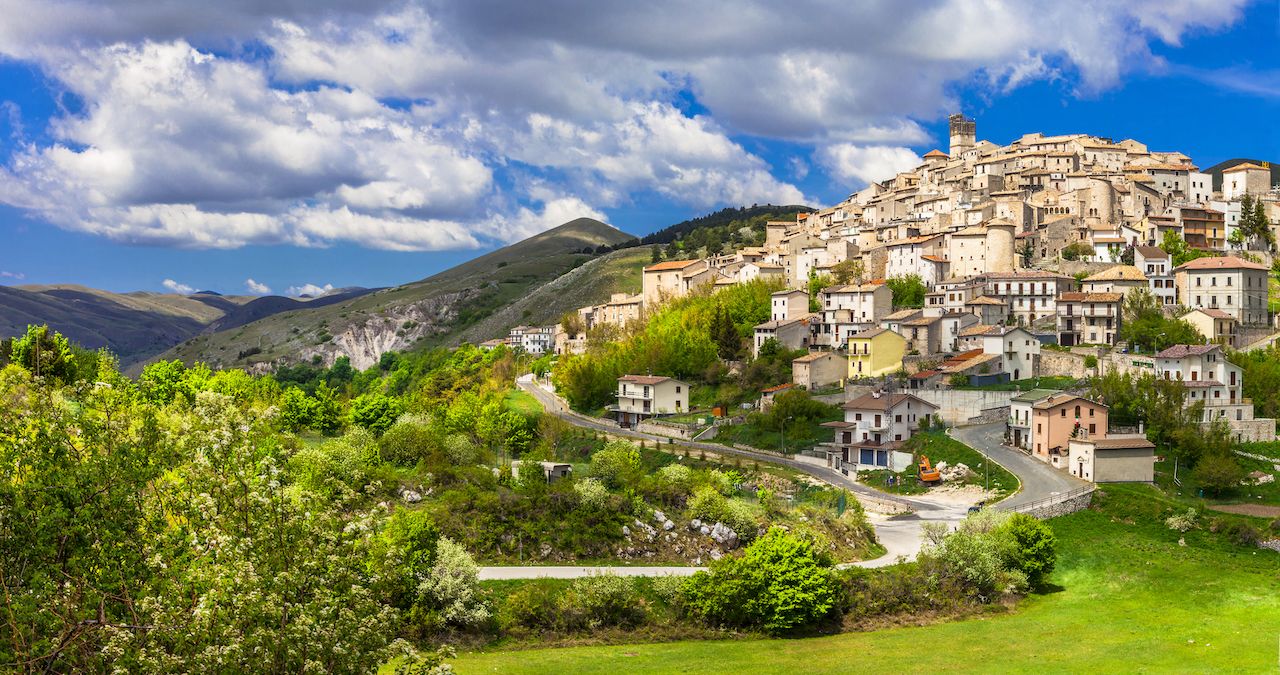 Finally, national parks are always a safe bet for some attractive driving roads and captivating scenery. In the region of Abruzzo, the Gran Sasso national park, one of the largest protected areas in Europe, is famous for its rocky, snowy (depending on the season) peaks like the brooding Gran Sasso massif itself or the Corno Grande, the highest peak on the Italian peninsula. A popular bikers’ pit stop in the province of Aquila is Ristoro Mucciante, a simple wooden structure with benches outside and grills smoking away with sizzling pork chops and local specialty arrosticini (lamb skewers). Stop off at the nearby medieval hilltop town of Castel del Monte, a huddle of houses rising up the steep slope with narrow, precipitous streets.

WineItaly Has the Most Diverse Wine Grapes in the World. Here’s Where To Start.
Tagged
Road Trips Insider Guides Italy
What did you think of this story?
Meh
Good
Awesome