Welcome to Miami! Or, if you’re not here yet, congrats on planning a trip to this big, bright city full of sandy beaches and mildly disreputable characters. Beyond regular tourists looking to chill at the beach or party for spring break, Miami will also soon welcome a ton of visitors for a variety of awesome events — the Super Bowl next week, the International Boat Show in February, and Ultra Music Festival in March. But with many of the top attractions being extremely far from the airport, getting around Miami — or at least getting around cheaply or in a time-sensitive manner — can be a little more difficult than the average city.

Considering our world-famous South Florida drivers, a charming collection of people who either learned to drive during the Truman administration or take stop signs as a polite suggestion, renting a car is not a wise decision. That said, we have a ton of other transportation options at our disposal. To help make sense of it all, we’re gonna break down the basics of getting around Miami for you and throw in some helpful tips along the way, so your time here will be as seamless as possible. 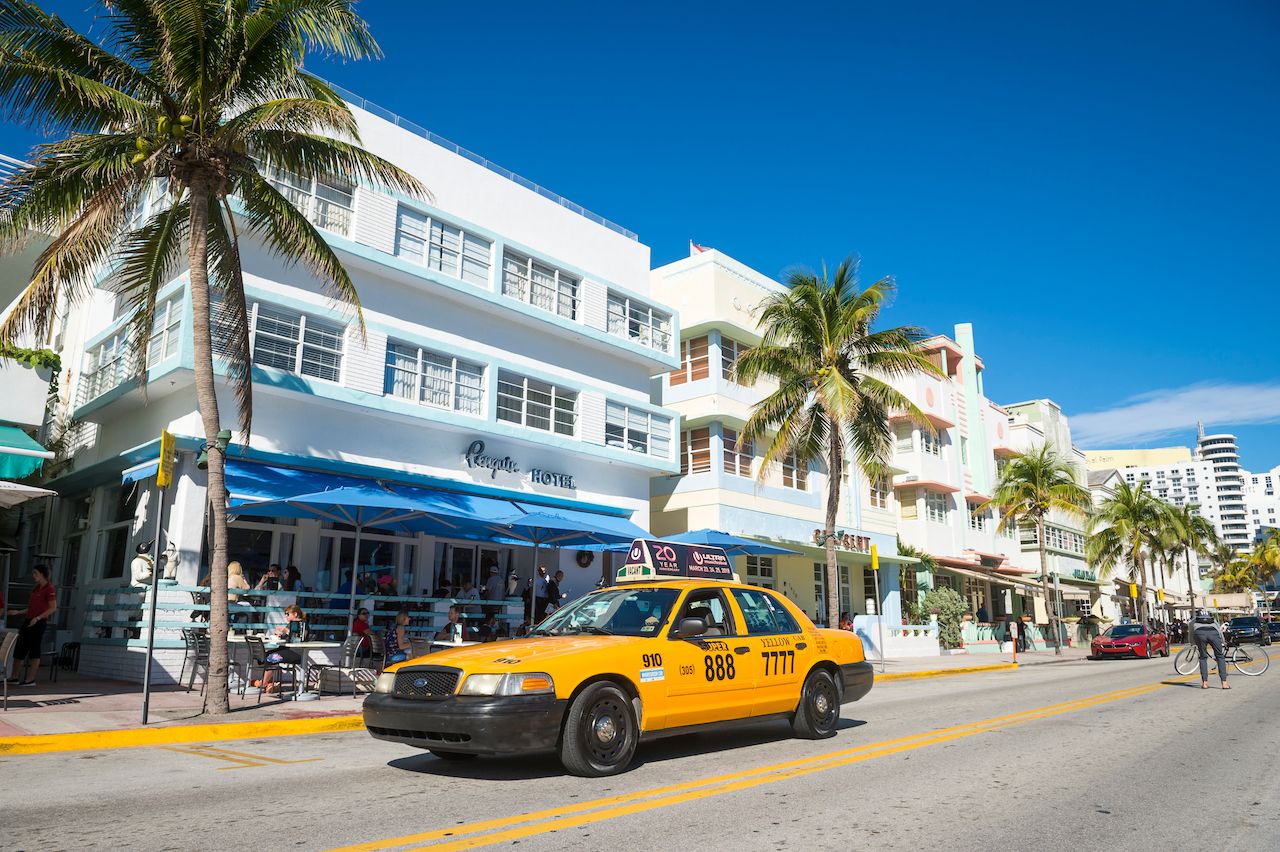 The first thing to know about getting Uber and Lyft in Miami is that we don’t have a designated drop-off area at our airport. Sure, you might see a sign for one when you walk outside, but much like literally every other traffic-related sign in this city, it is purely decorative. Your driver will pull up to the same curb as every other car, so you’ve got to keep a lookout.

Ft. Lauderdale, a slightly more organized alternative to MIA, has rideshare airport pickup located at the far end of each terminal.

If you are planning on calling your driver to explain where you are, also be aware that a great number of rideshare drivers in Miami do not speak fluent English. You can either get frustrated about this or brush up on how to say, “I’m standing by Door 6 at American Airlines,” en Español. Only the second one will help you.

Taxis are typically two to three times more expensive than rideshares in Miami, even during surge periods. They are useful, however, if airport traffic is completely snarled, since taxis have exclusive use of the inside lane at MIA pick up and won’t sit in traffic picking you up or leaving. Taxis have a flat rate leaving the airport of $21.70 to downtown, $32 to South Beach, and $27 to the Port of Miami. Taxis are also a good option if you’re staying at a nearby Miami Airport hotel or in South Beach and need to go a short distance quickly, as you can hail one easily and won’t have to wait on it to find you.

Getting around Miami by train 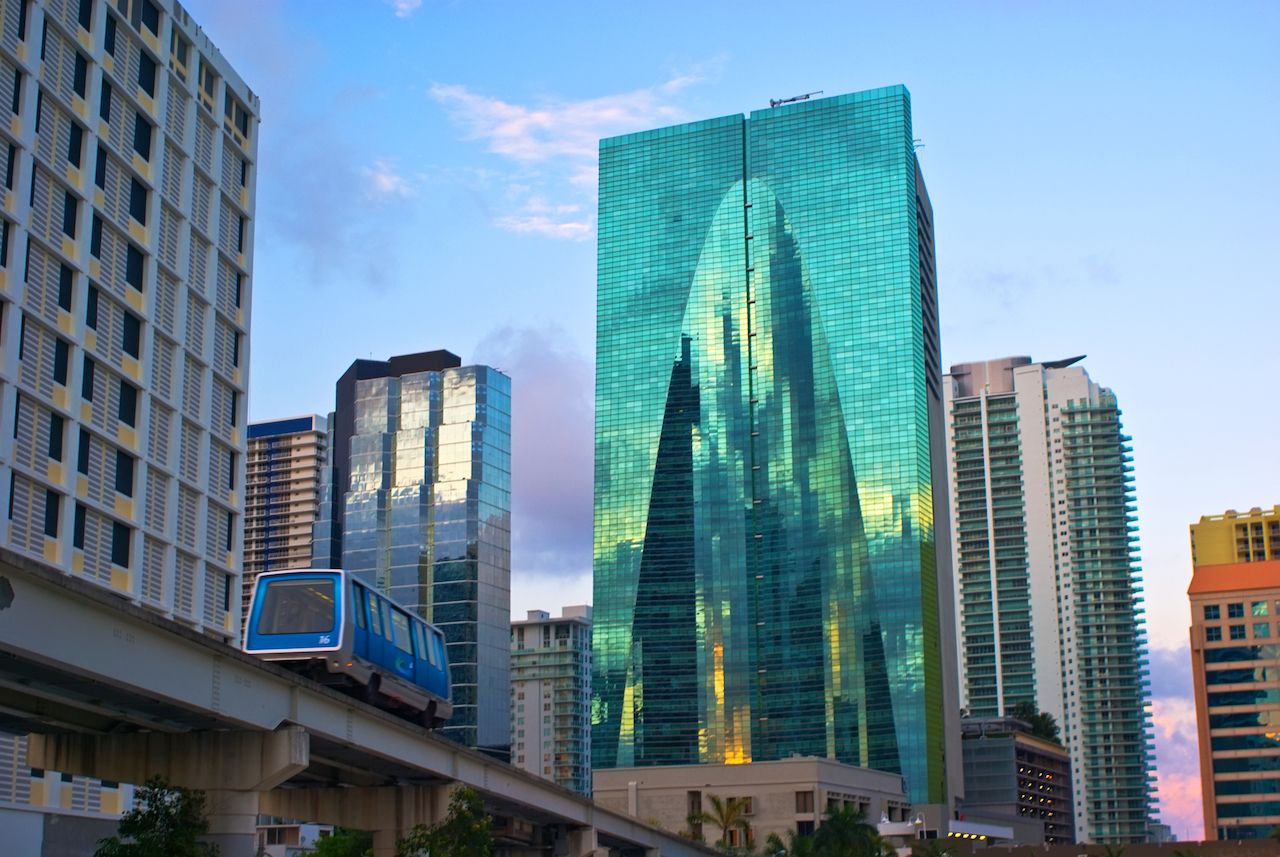 Miami has a Metrorail, a fact about as widely known in Miami as the fact we have a professional hockey team. The Metrorail runs to Miami International Airport, Downtown Miami, Brickell, University of Miami, and… not much of anywhere else. So if you’re staying downtown or in Brickell for business it is useful, and only costs $2.25 a trip, and you can pay from your smartphone. If you’re going to South Beach, North Beach, Wynwood, Hard Rock Stadium, or literally anywhere else people visiting Miami like to go, it doesn’t even get close. So opt for a rideshare or taxi.

In downtown and Brickell, you can also take the free Metromover, a small, overhead tram that makes several stops around the area. It connects to the Metrorail at Brickell and Government Center stations, operating in clockwise and counterclockwise loops. You can view the whole map here and will find it most useful if you’re checking out the Miami Heat at its arena, or visiting Bayside Marketplace.

If you’re flying into Ft. Lauderdale or staying in Ft. Lauderdale, or just want to see what America’s finest city of canals is all about, you’ve got a couple of train options. First, we offer the TRI-Rail, a public commuter train service that runs from West Palm Beach to Miami, making stops in Ft. Lauderdale and other cities along the way. The price varies by how far you go, but Miami to Ft. Lauderdale is about $7.

Your other option for cross-county transportation is our sleek new Brightline train, which has stations in downtown Miami, Ft. Lauderdale, and West Palm Beach. It will get you from Miami to Ft. Lauderdale in 25-30 minutes and from Miami to West Palm Beach in a little over an hour. It is, quite simply, the nicest commuter trail you will ever ride, with stations that smell like grapefruit, high-speed internet and booze carts on the train, and a first-class section where the food and drinks are free.

For visitors, it gives you an easy way to check out the rest of South Florida. It can also be useful if you’re flying into Ft. Lauderdale as it’s a short, $12-ish rideshare from Ft. Lauderdale-Hollywood International to the Brightline station. Train fares vary by time, but expect about $12 each way to Ft. Lauderdale and $20 to West Palm Beach.

Taking buses and trolleys in Miami 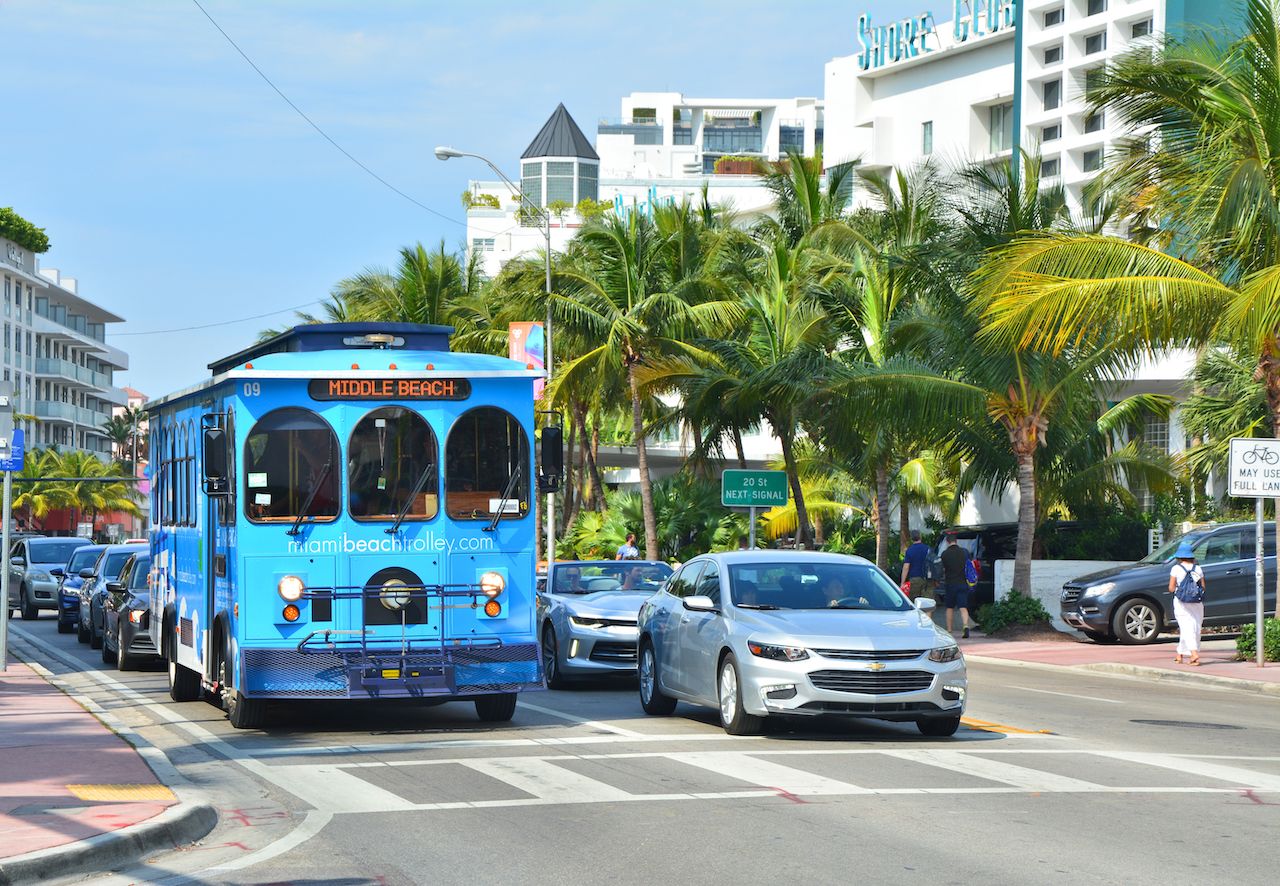 Though you may see a lot of them on the streets, buses in Miami are not all that practical for visitors. The most useful thing you’ll find is the South Beach Trolley, a free trolley that circulates South Beach in clockwise and counterclockwise loops. It’s a cheap, easy way to traverse the beach and though you’ll still get stuck in traffic, it won’t cost you anything.

You’ll also find Middle Beach and North Beach loops if you’re staying further up in Miami Beach, as well as a Collins Express trolley, which runs the length of Miami Beach making limited stops along A1A.

If you’re determined to save money getting from Miami International Airport to Miami Beach, you can catch the airport express bus just under the airport Metrorail Station. It costs $2.25 and will take you directly to 41st Street, then on to several stops south in Miami Beach.

A note on walking in Miami 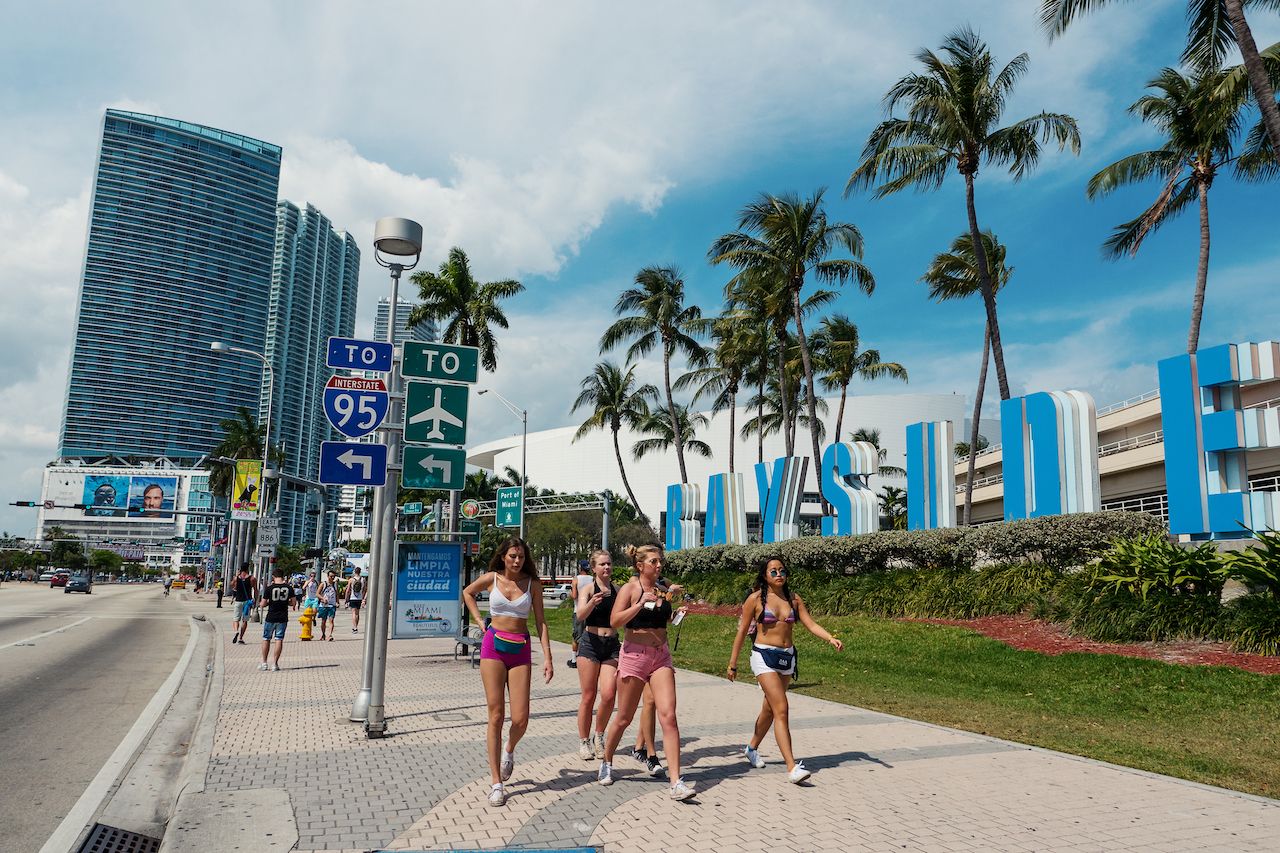 Perhaps you’ve read all of this and thought, “This sounds like a lot of time spent inside air-conditioned cars, trains, and buses, and I came to Miami to be out in the sun! I’m gonna walk everywhere.” While we applaud your dedication to fresh air and exercise, please remember a couple of things:

First, it’s hot here. And incredibly humid. And walking a mile will be a lot more taxing than it probably is back home, so bring extra shirts and drink lots of water.

But secondly, and more importantly, pedestrians in Miami don’t have the right of way. Yes, technically, legally, they have the right of way. But technically, legally, our politicians aren’t supposed to give construction kickbacks to family members. So never, ever assume a car is slowing down for you in a crosswalk, much less stopping. And don’t jump out into the street as soon as the little man says walk since a car may decide to make a right turn directly into you. Yellow lights mean speed up. Red lights mean three more cars, four if it’s rush hour. Just remember that in Miami, cars don’t stop for pedestrians, so proceed with extreme caution.

Armed with this knowledge, we hope you enjoy your time in South Florida. While we might not be the easiest city to traverse, at least you’ll have palm trees and turquoise waters to look at while you do. Whether you’re taking a rideshare, riding our trains, or hopping on the trolley, you’ll be getting a heavy dose of local flavor. And, thankfully, never have to drive an inch.