Much like with great pizza and bad taxi drivers, Christmastime ice skating isn’t limited to New York City. Sure, many of us grew up watching images of people gleefully gliding by in the background of The Today Show and thought, “Man, if only I was willing to pay three-quarters of my paycheck in rent, I, too, could have a scenic outdoor place to ice skate!” But you don’t have to — cities around the country have gotten into the urban skating game, as have national parks and even some beachfront hotels. Here are 15 rinks around the country that are right up there with Rockefeller Center, and sometimes even better. 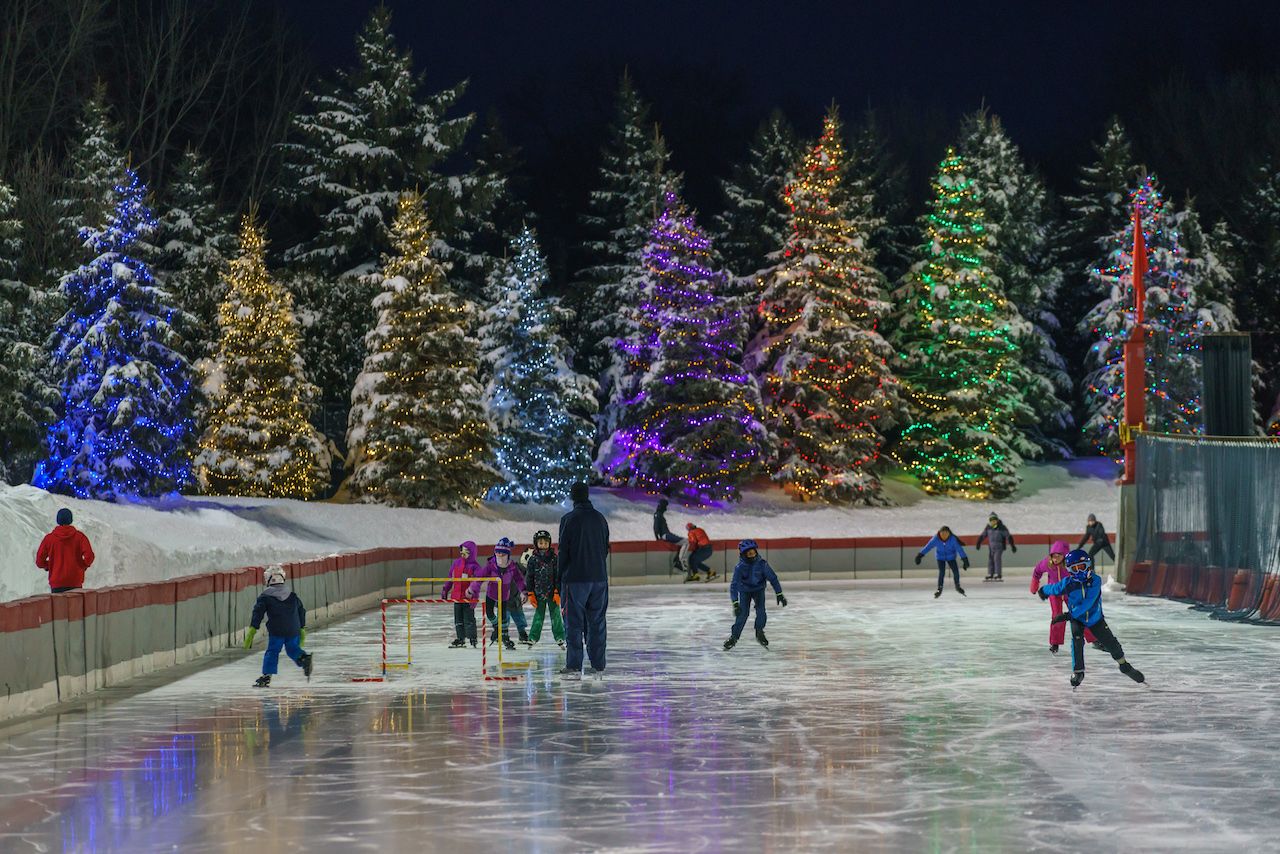 Not that it’s exactly an item on many people’s bucket list, but if you go to the Guidant John Rose Minnesota Oval, you’ll have the honor of putting your blades on the largest artificial skating surface in North America. This 111,000-square-foot concrete slab stays frozen even when temperatures reach the 50s thanks to 84 miles of underground piping (take THAT, global warming). This time of year, the trees surrounding it are decked out in their Christmas finest, creating a brightly lit winter wonderland you would hardly believe existed if you came in the summer for inline hockey. 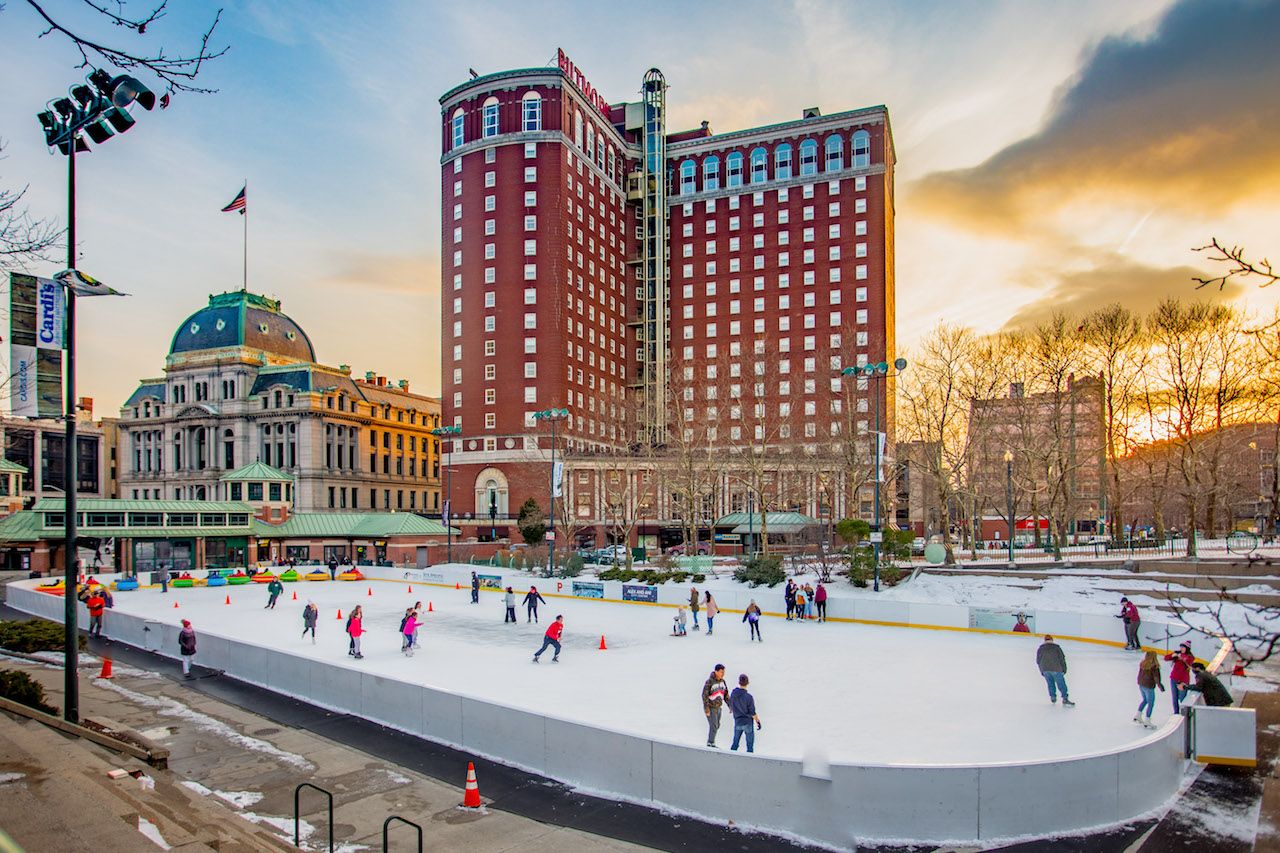 The ice arena at the Alex and Ani City Center juts into the middle of the Providence skyline, and it’s probably best known for its ice bumper cars, a winter tradition that’s become the holiday signature of Rhode Island’s largest city. But even if you can’t score a bumper car, this picturesque rink is worth a few spins on the skates. The ice is set right in the shadow of the city’s two most iconic buildings: the Industrial National Bank Building and the Biltmore Hotel. 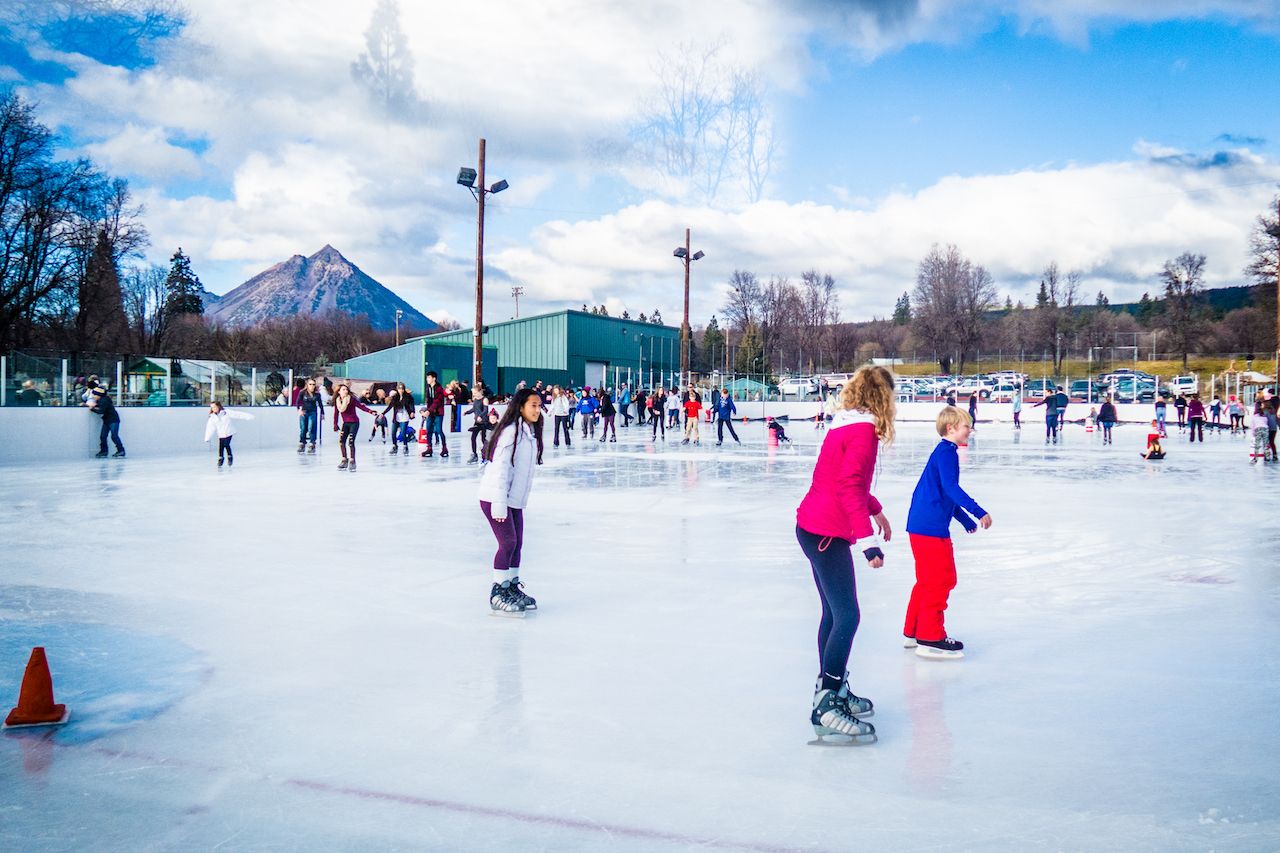 When you have some of the most majestic natural scenery in America, you don’t need a big city skyline for a stunning skate setting. The Siskiyou Ice Rink is a little municipal spot that sits under the watchful eye of Mount Shasta, a couple of hours up Interstate 5 from Sacramento, California. The rink is regulation NHL size and offers skate camps, daily lessons, and even adult hockey leagues during the winter. 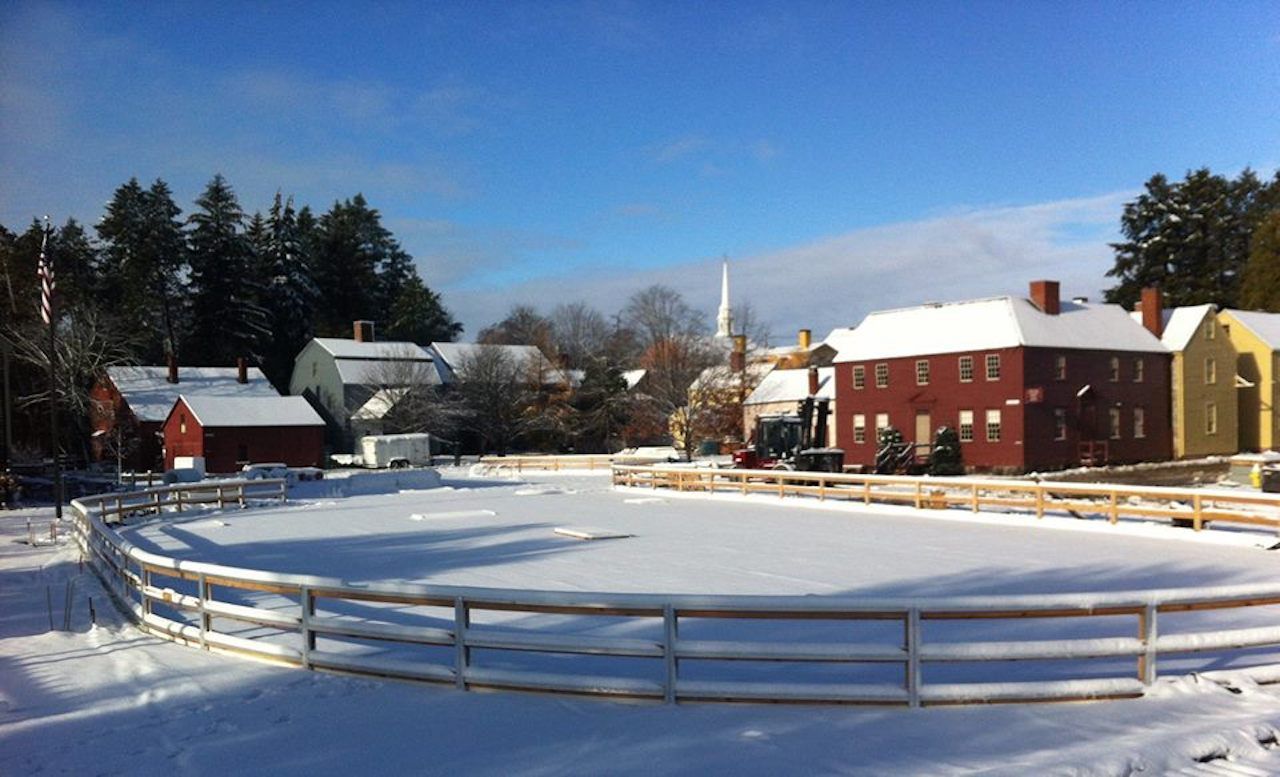 Nothing says “pastoral winter in New England” like skating by 32 historic buildings under a narrow church steeple somewhere in rural New Hampshire. You’ll get that quintessential northern feel at the Strawbery Banke Museum, a 10-acre spot dedicated to preserving the history of the Portsmouth waterfront. Each winter, the museum sets up a rink on Puddle Duck Pond in the heart of its historic core, allowing skaters to feel as if they’re gliding through the colonial era. 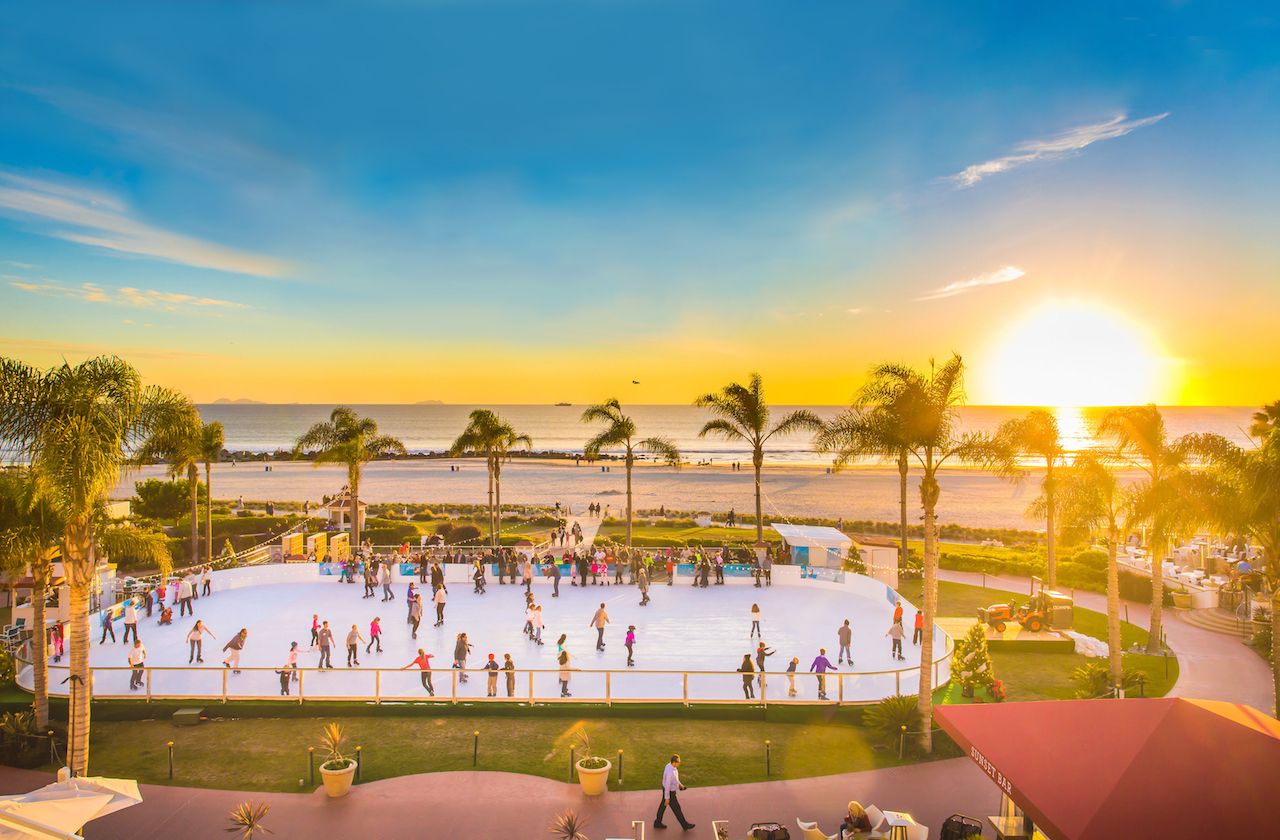 Just because you choose to spend your Christmas vacation under palm trees draped in Christmas lights doesn’t mean you should miss out on the skating excitement. At least, not if you stay at the stately Hotel Coronado along the shores of San Diego. Here, you’ll find the annual Skating by the Sea event that brings a little piece of winter to Southern California. You can skate by the sunset, and when the weather gets “cold,” bundle up against those upper-50s wind chills next to your very own fire pit at Frostbite, the hotel’s rinkside lounge. 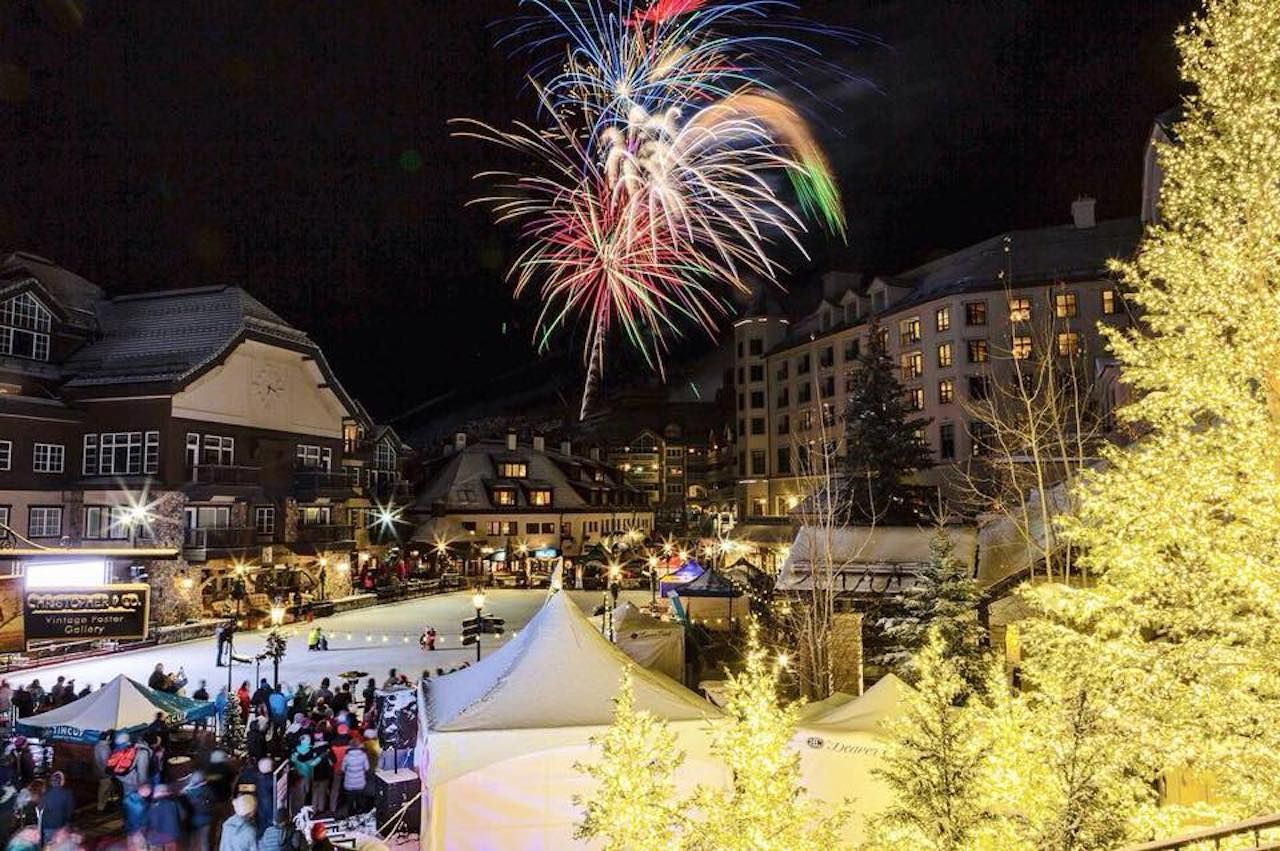 Though Beaver Creek Mountain Resort isn’t the only ski resort in Colorado to put a rink in its village, the setting here is the most scenic. The village sits at the base of 1,800 acres of trails, where fireworks shows at night and couches around the rink during the day make it the picture of ski resort ice-skating fun. Did we mention it serves cookies at 3:00 PM every day too? It kind of makes the pretzel stands outside of Rockefeller Center look a little lacking, doesn’t it? 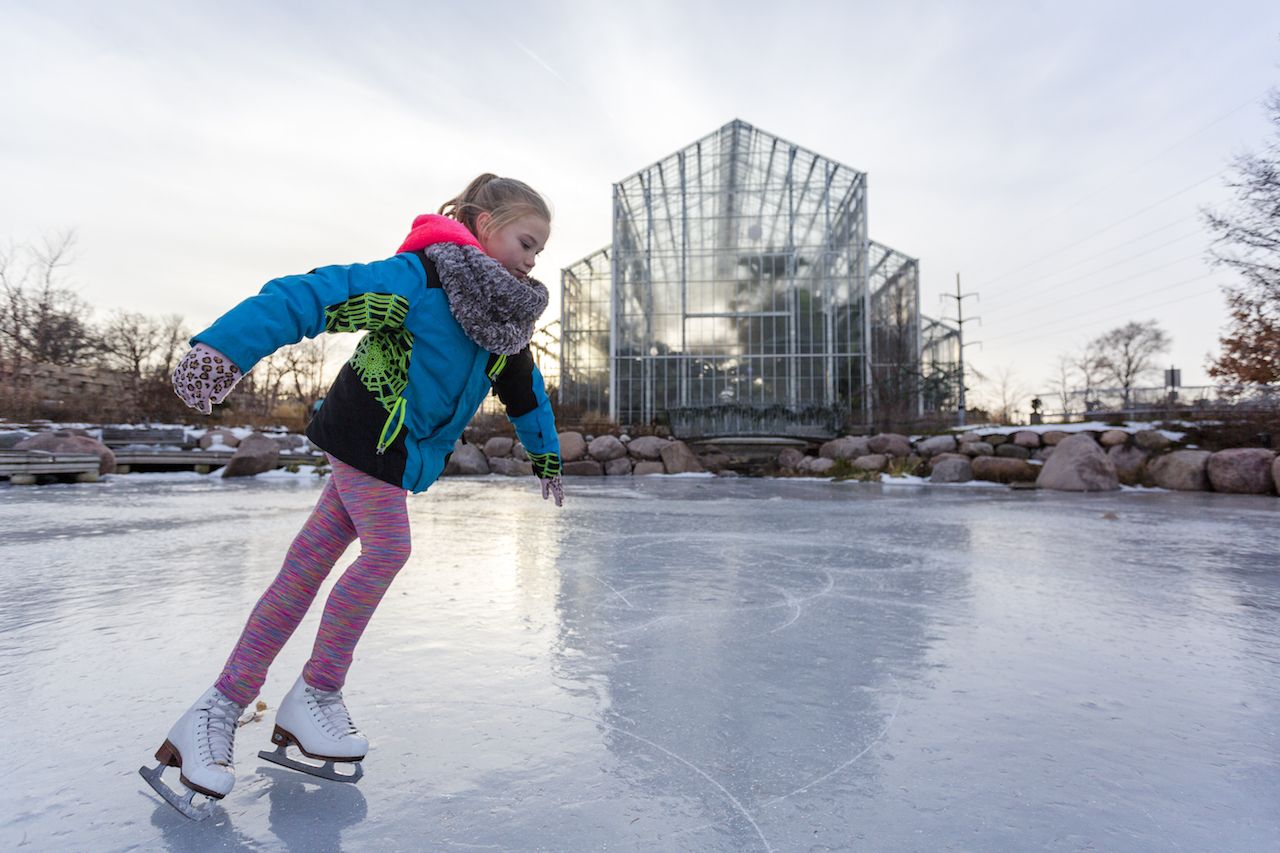 One might think December is the wrong month to visit botanical gardens in Illinois. But leave it to the people of Rockford, Illinois, to find a way to make the Nicholas Conservatory & Gardens a legitimate attraction during the winter. The frozen-over Eclipse Lagoon is surrounded by the lush vegetation of the garden, and though it doesn’t offer skate rentals, if you bring your own the rink is free to use for skating or, on the north part of the lagoon, ice hockey. 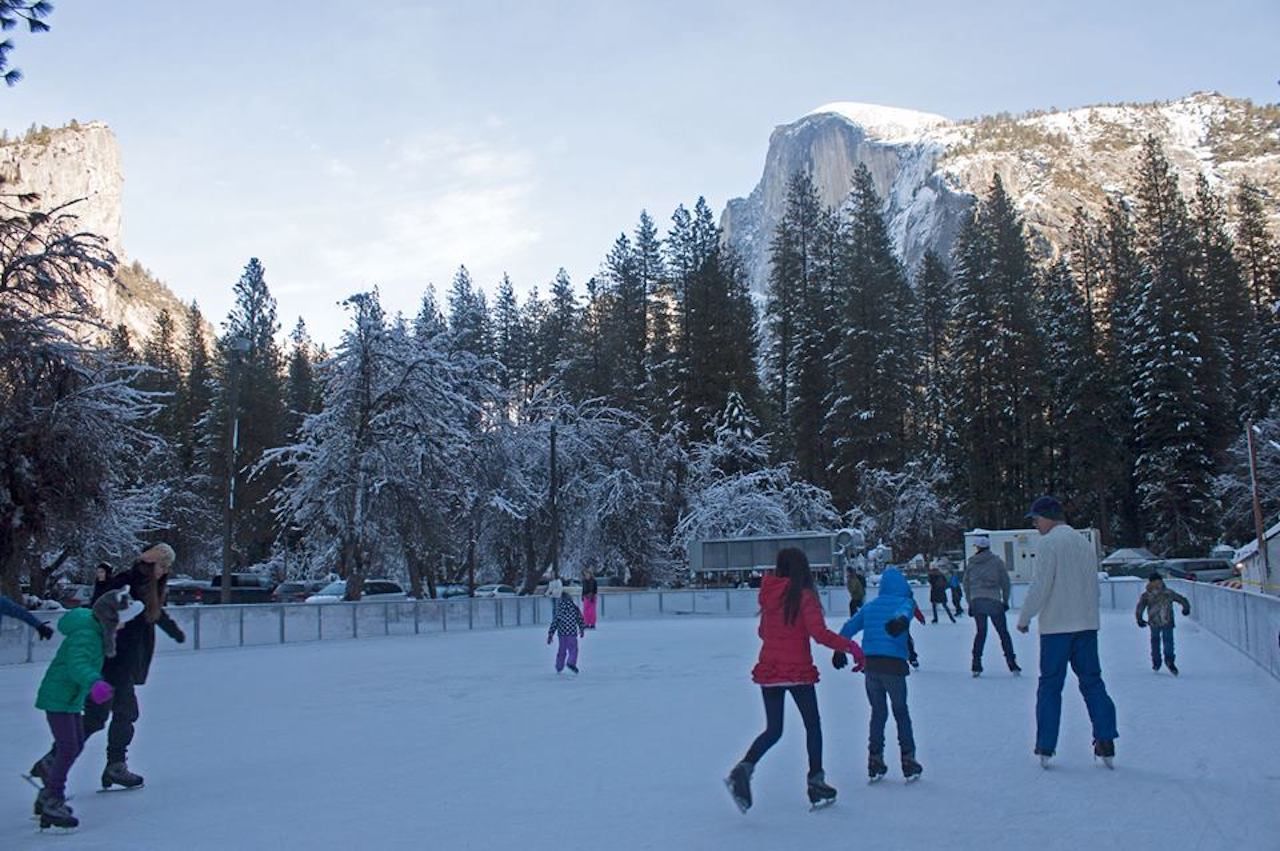 You’d be hard pressed to beat the view from this rink, where winter skating has been a tradition since the 1920s. The Half Dome Village Ice Rink sits at the base of the famous Half Dome rock face, one of the most iconic scenes from our national parks. And it’s perhaps the country’s greatest natural landmark to have its own skating rink. It isn’t the easiest to get to, and during some seasons it can require an icy drive into the mountains, but you’re rewarded with not only skating under an incredible view but also rinkside fire pits. 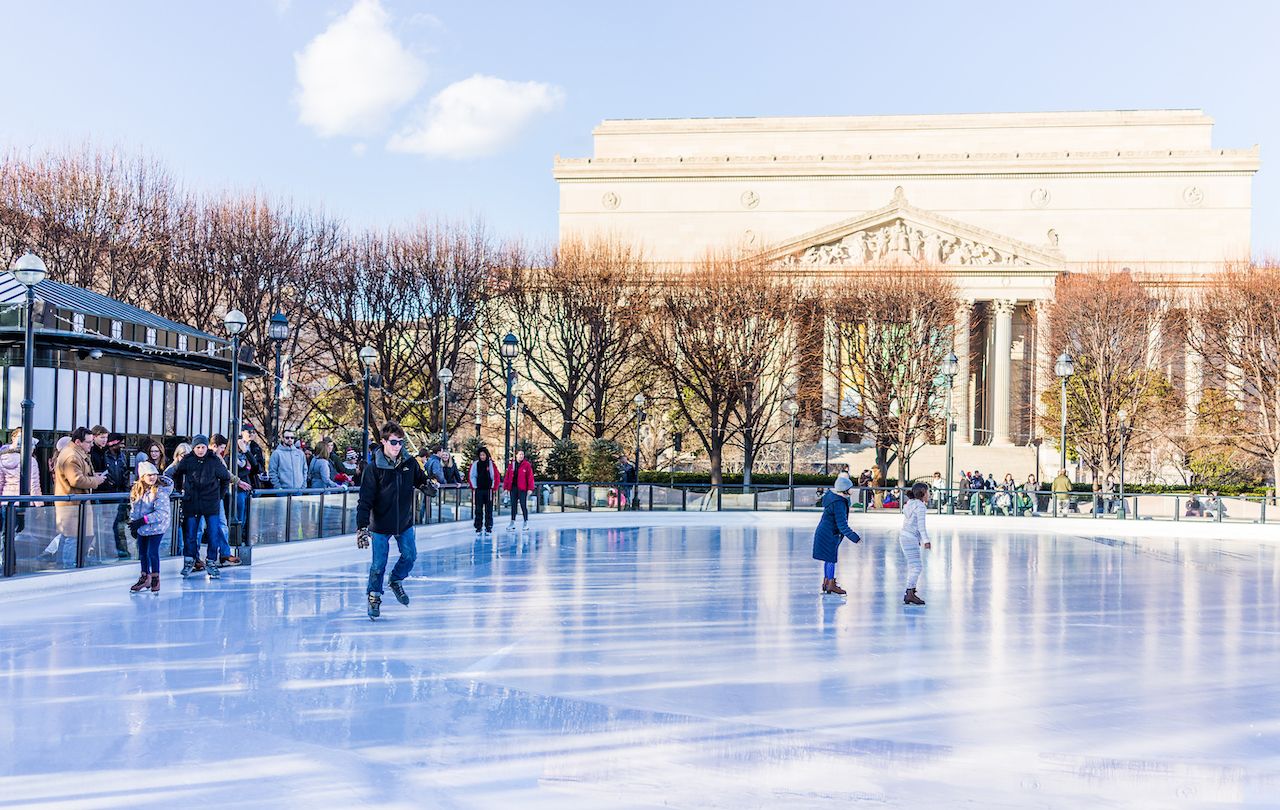 No matter how divided things are, the holidays stand as a time to put aside differences and agree on the most important things in life — like laughing at people who can’t ice skate. And no matter one’s position in Washington, DC, we can all get together on the Sculpture Park Garden Ice Rink just outside the Roman pillars of the National Gallery of Art and enjoy a good laugh at the expense of an uncoordinated parent trying to spend quality time with their kids. 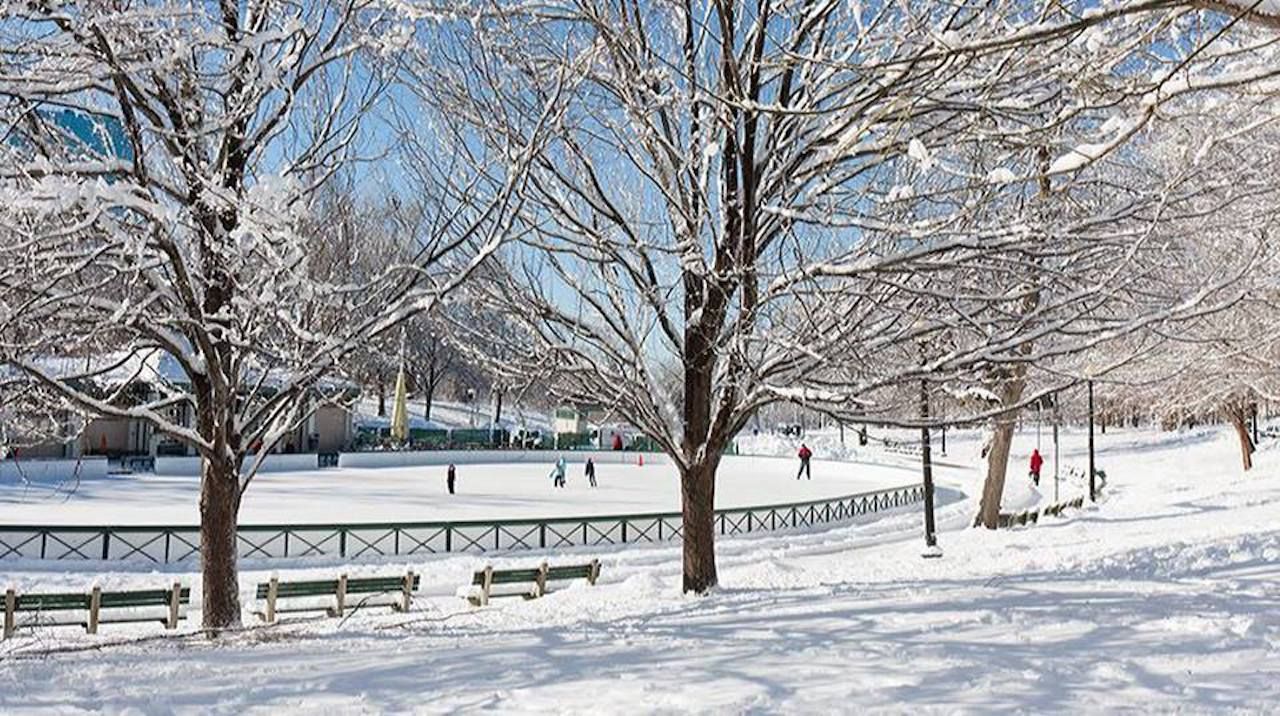 Don’t think too hard about what happens to the poor frogs when the famous Boston Common Frog Pond freezes over in the winter and turns into a skating rink. Instead, enjoy the snow-covered trees of one of the nation’s best urban parks as you skate under the Boston skyline before grabbing a cup of cocoa in the Frog Lodge. We’d mention USA Today named it the best outdoor skating rink in the US last year, but there’ll be plenty of people at the rink wearing Patriots beanies who will be happy to tell you themselves. 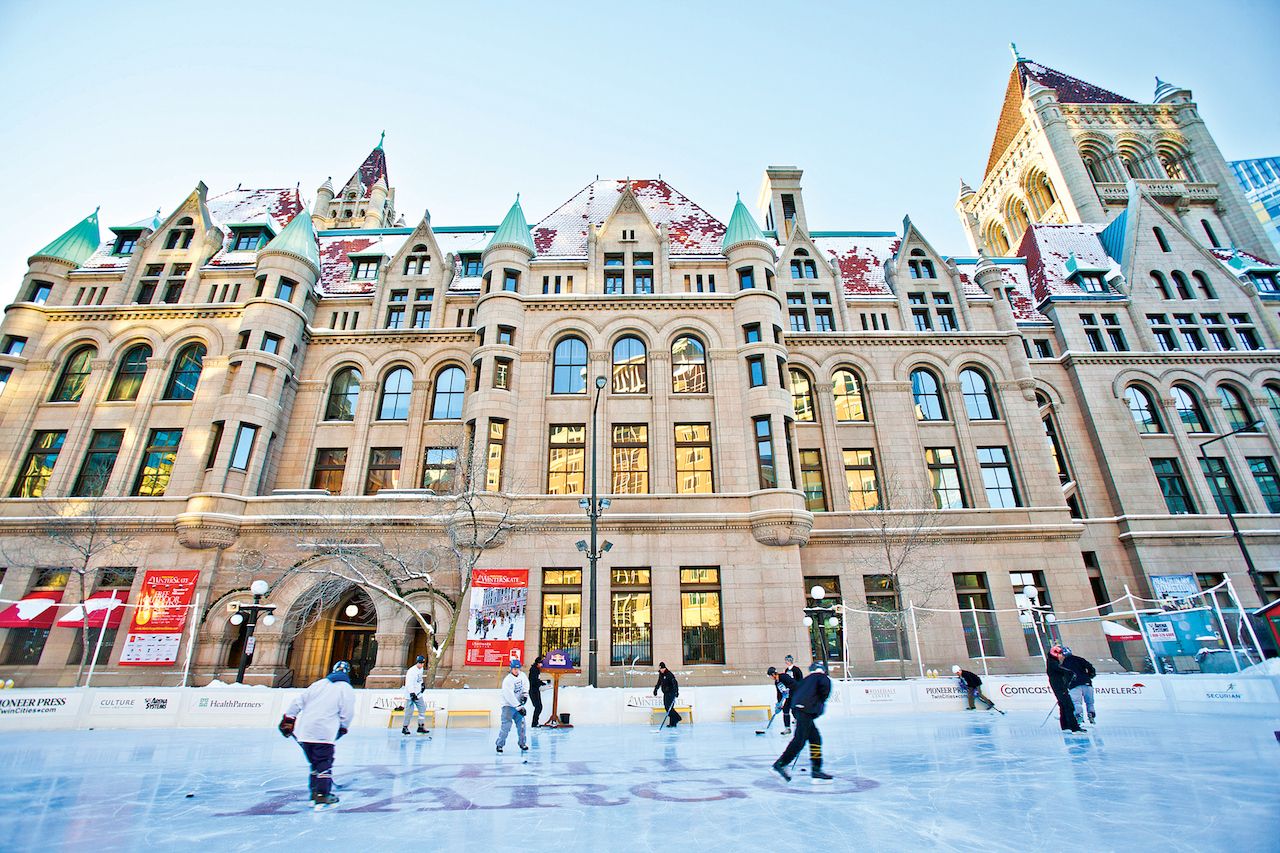 Minnesota’s capital city often gets overlooked because of its location next to the Super Bowl-hosting twin in Minneapolis. But the Wells Fargo WinterSkate showcases St. Paul’s charm and architecture in a way that provides a whole new appreciation for the city. The colorful rink lights up the gothic Landmark Center all winter long. On the off chance you’re the one person in Minnesota who doesn’t know how to ice skate, the rink offers free lessons on Saturdays. 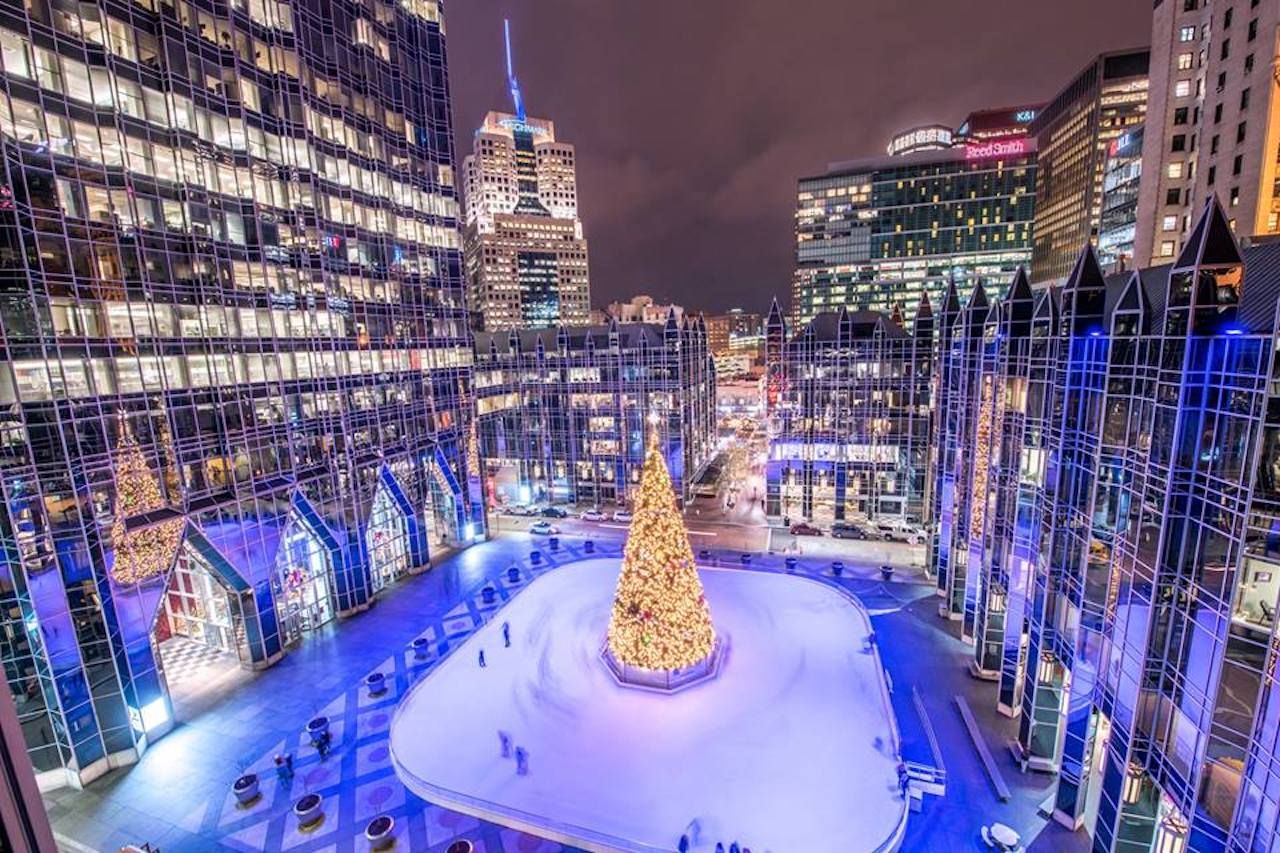 Much like Pittsburgh’s skyline might be the most underrated in the country, so might its sprawling downtown ice rink, MassMutual Ice Rink. It’s one of the longest-running rinks in America — open from November 16 to March 6 – and sits under the castle-like spires of PPG place like an urban ice palace. There’s a Christmas tree right in the middle, and the rink is nearly 67 percent larger than the one at Rockefeller Center and offers 700 pairs of skates to rent. It even hosts a weekly Skate with Santa event all through December. 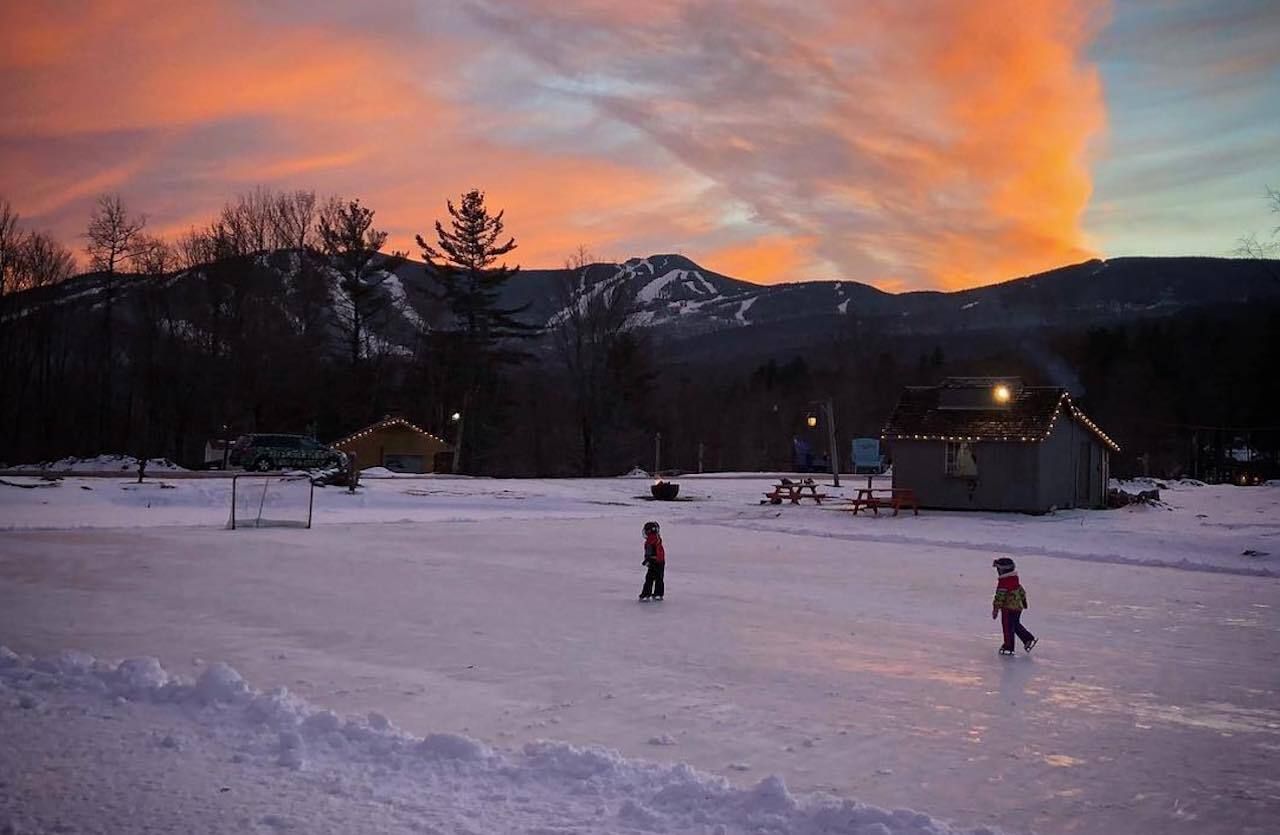 Photo: The Foundry at Summit Pond/Facebook

Ski resorts west of the Mississippi aren’t the only ones that know how to throw a party on ice. In Killington, Vermont, The Foundry offers ice skating on Summit Pond as both a great after-dinner activity to settle the stomach but also as a way to prove you’re brave enough to battle the evening temps in a place that routinely approaches “hella cold” after the sun goes down. You’ll also be skating on an actual pond, with ice made of actual pond water, and though it’s groomed to near-perfection, this is ice skating as it was always meant to be. 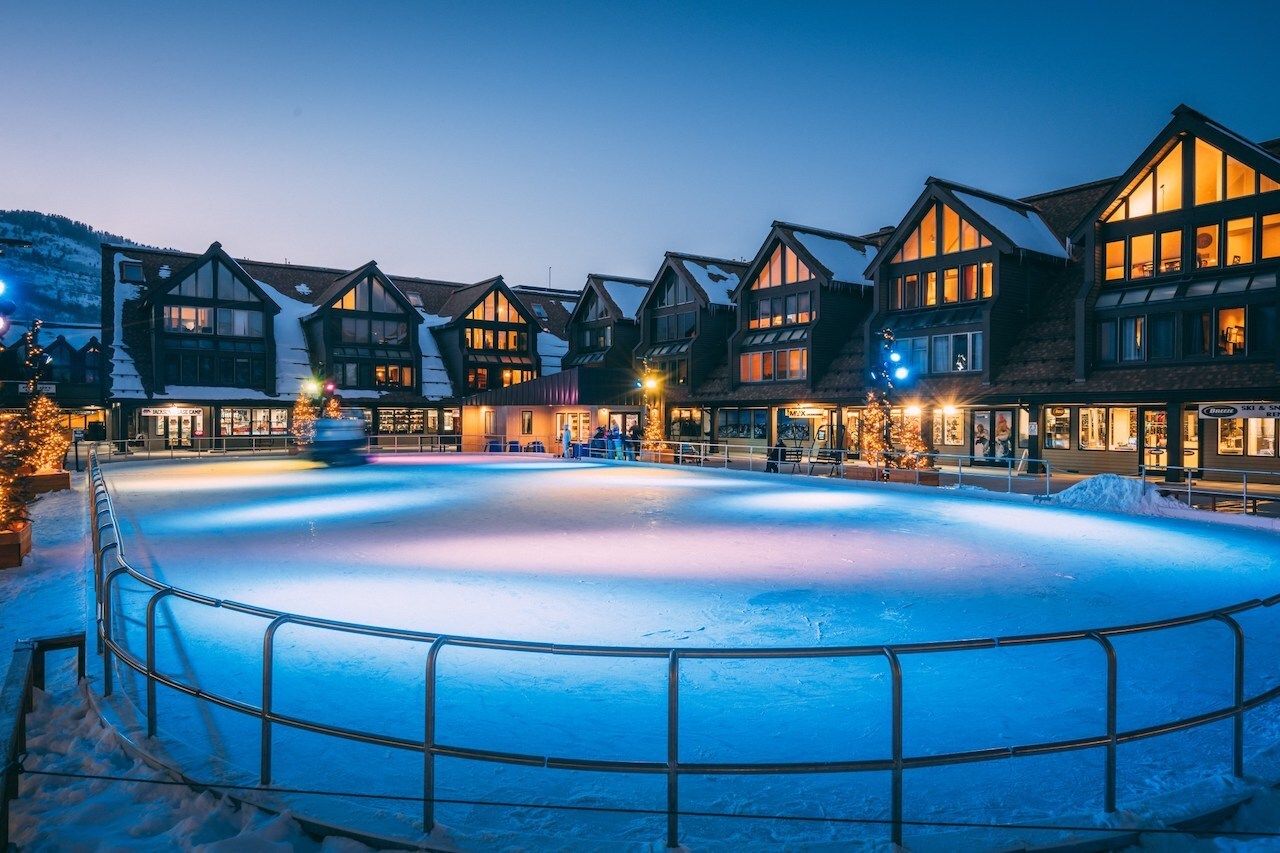 Park City’s Resort Center Ice Skating Rink is not tucked away, nor is it difficult to find. But once you’re on the ice, it feels as though you’ve stepped away from the base resort chaos even though you’re only about 50 steps removed. The lack of elbow-to-elbow skating and rinkside hot beverages make this the most romantic place in the already seductive setting of Park City, our favorite ski destination for non-skiers. With complimentary skate walkers, Resort Center is also a great place to gain (or forget about) your footing. 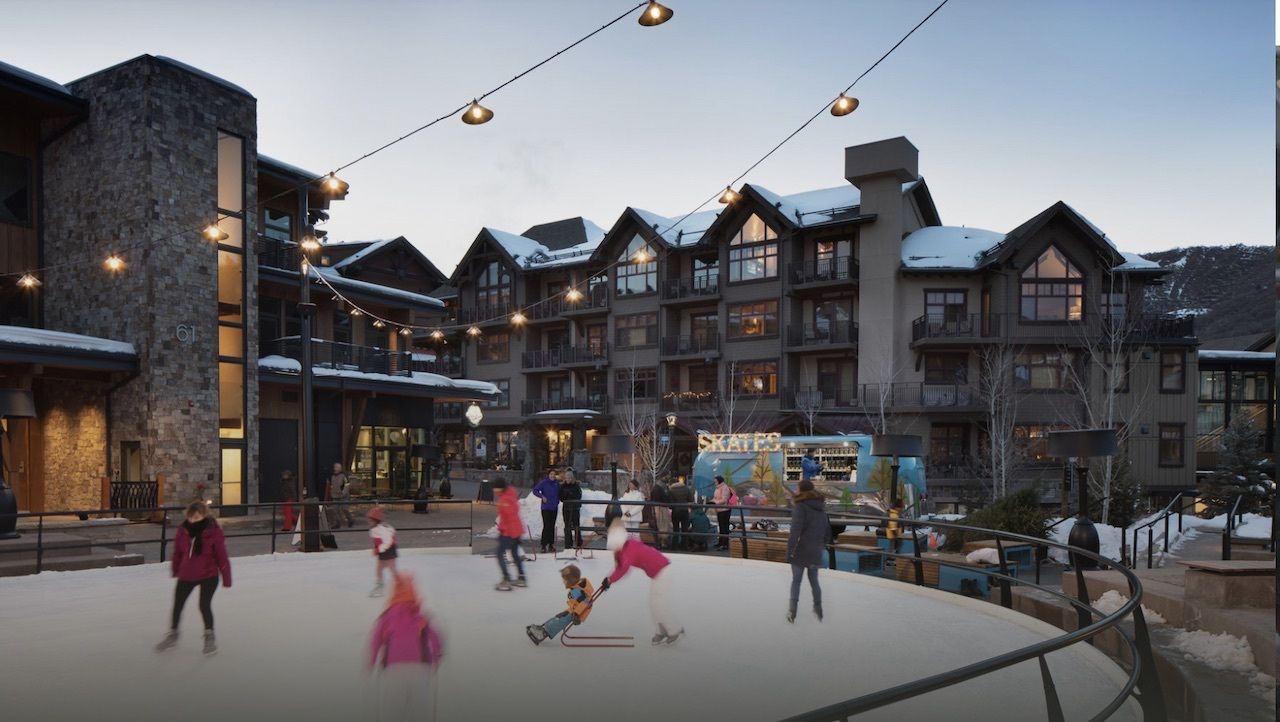 The rink at The Collective Snowmass is the main attraction in the center of an already star-studded base resort. If you have secret on-ice talent that your family or friends don’t know about, this is the place to break that silence. Everyone will be watching you. Free skate rentals from a vintage airstream and plenty of rinkside seating, with more available from the balconies of the adjacent Limelight Snowmass, mean there’s no reason to dig the wallet out of your ski pants. For sure, you’re already paying Aspen prices just to be there — but the added touch is quite pleasant and, at the very least, gives the kids something to do while the grown-ups relax over an apres-ski Snuggler.

A version of this article was previously published on December 18, 2018, and was updated on December 2, 2020, with more information.

Ski & SnowThe World’s Most Beautiful Lakes You Can Ice Skate On
Tagged
Holidays Ski & Snow United States
What did you think of this story?
Meh
Good
Awesome