For visitors looking to avoid the crowds in Venice, diversity is the answer. The city groans with tourism all year round, but by changing a few habits and avoiding over-congested destinations, visitors to the city can both aid sustainable tourism and enjoy a more peaceful holiday in Venice. Patronizing local craftsmen instead of made-in-China import shops, seeking out deserted churches down quiet alleys, and heading out into the lagoon are some of the recommendations in this non-tourist guide to Venice to help visitors experience the city from a more local point of view. 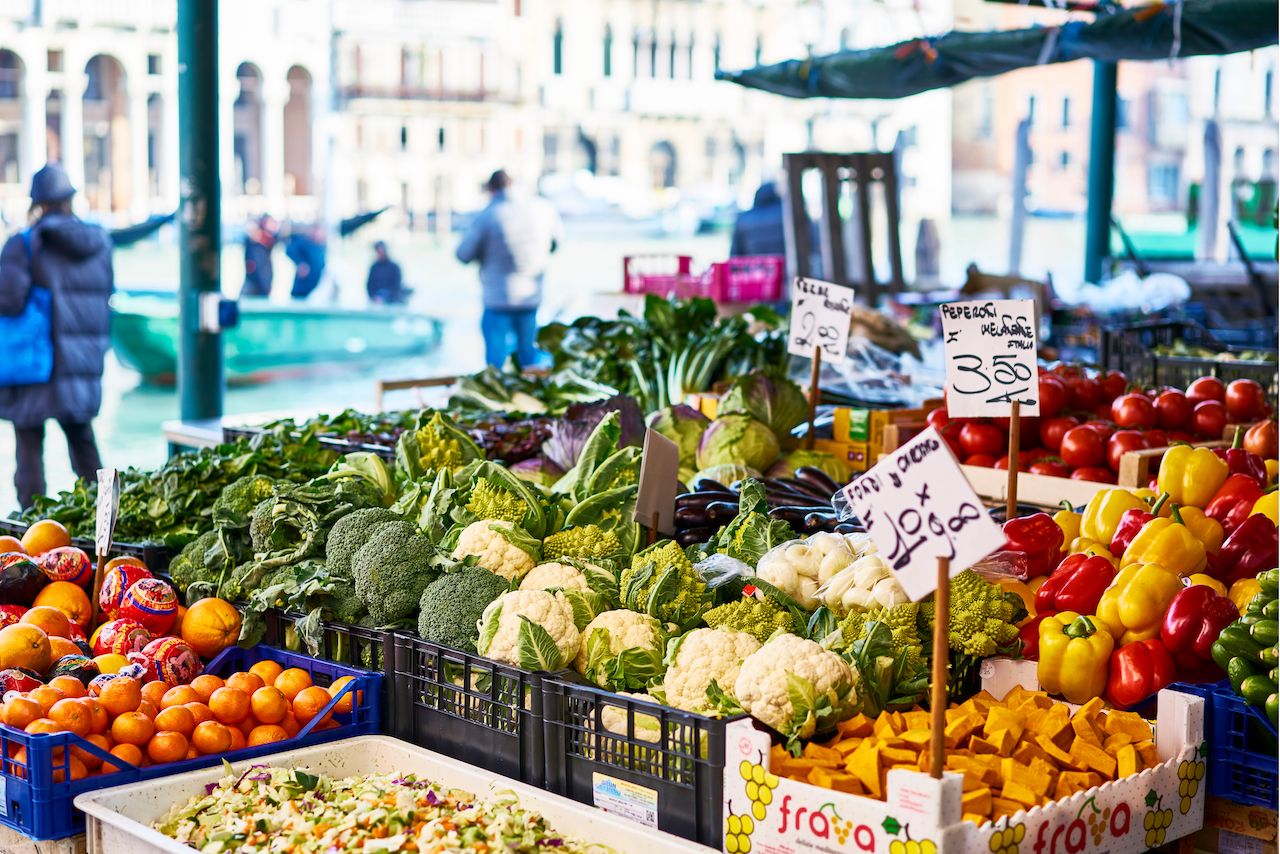 There’s no need to spend time in anonymous supermarkets when in Venice (though take a peek inside the Despar Teatro located inside an old, refurbished theatre). For food, go to the Rialto markets, which are historical markets serving Venice since the 12th century. At the fish market, you can find local specialties from the lagoon like clams and mantis shrimp. If it’s not too busy, the sellers are usually enthusiastic about sharing recipes and cooking ideas. The fruit and vegetable market next door sells produce which comes from the nearby Sant’Erasmo island, sometimes called the “vegetable garden of Venice.” Both markets have been struggling as the number of residents in the city dwindles, so patronage from visitors to the city is essential to keep them alive. 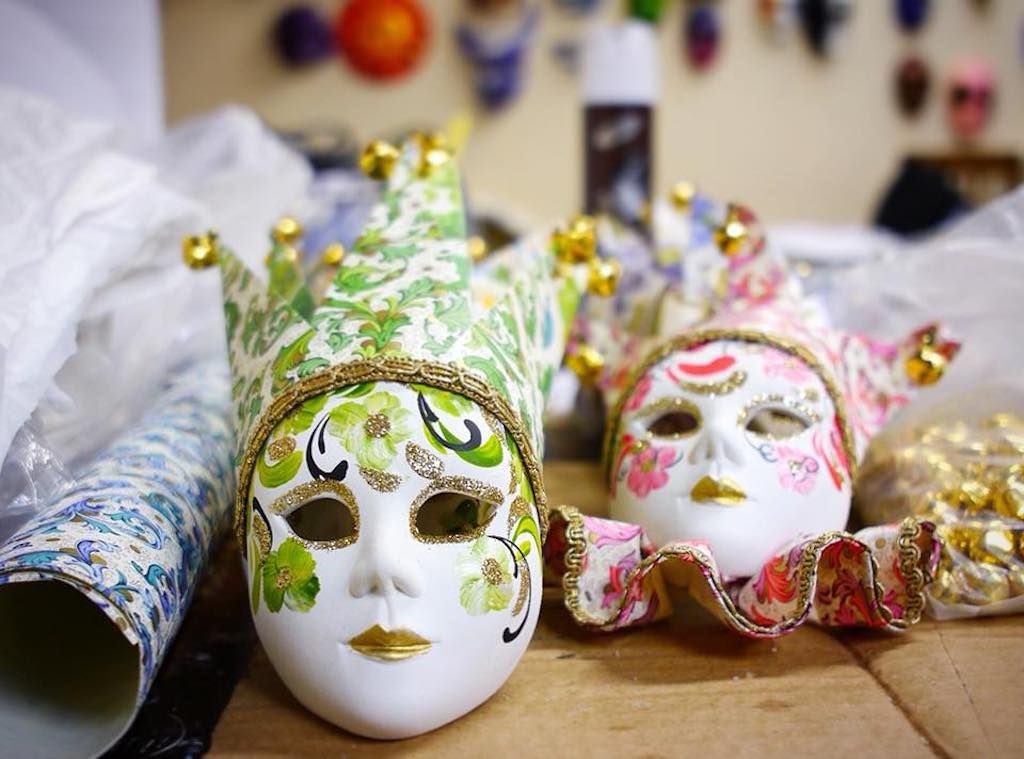 Souvenir shops are not in short supply in Venice, but quality is hard to find. If you want to take home the symbol of Venice, a mask, go to Ca’ Macana, which only sells handmade, local products. You can also take a workshop here to paint your own. Another historic product of the city, but one that hasn’t received as much fame as masks or glass, is paper. Legatoria Piazzesi is the oldest paper shop in Venice, and it sells hand-printed papers, decorated notebooks and stationery, and even has an in-house bookbinding service. 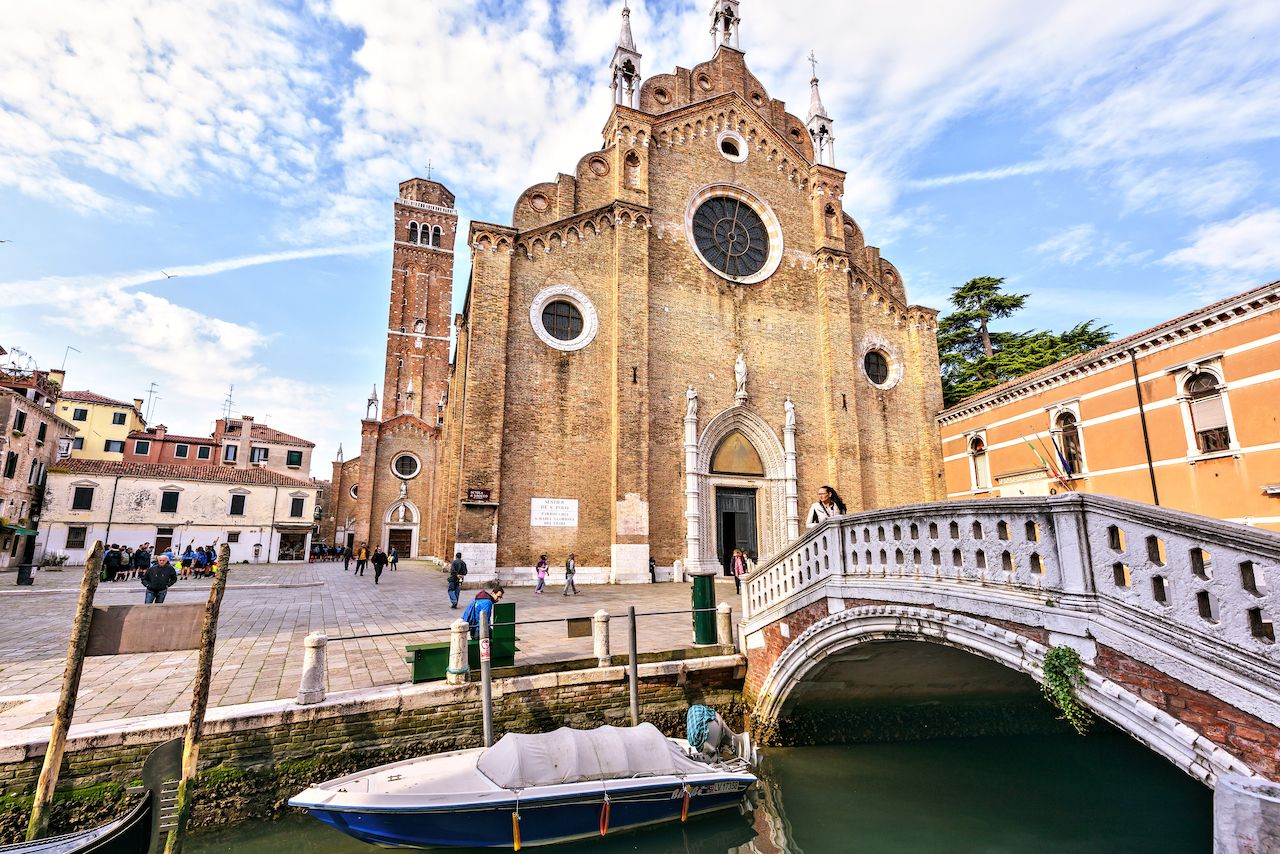 Venice’s most famous sights are not to be missed, especially on a first trip to the city. The Accademia Gallery and the Palazzo Ducale, for example, are amongst the most prestigious museums in Europe, if not the world. But with increasingly high entrance fees ($17 and $22.50 respectively) and swarms of tourists, if you’re not going to spend five hours studying all the artwork, there are more reasonable and far less crowded options.

The best way to see art at a low cost and without hordes of tourists is to go to churches. One of the richest churches for art is Santa Maria dei Frari which, for a $3.50 entrance free, lets you see Titian’s ”Assumption of the Virgin” altarpiece, an altarpiece by Giovanni Bellini, and a wooden sculpture of John the Baptist by Donatello. The Church of the Carmini is another church that’s free to enter, and houses paintings by Tintoretto, Cima da Conegliano, and Lorenzo Lotto. San Pantalon, again free, is a Baroque extravaganza with a ceiling that holds the accolade of largest single canvas in the world, and San Cassiano is home to a Tintoretto crucifixion which the great art critic John Ruskin honored as the “finest [example of a crucifixion painting] in Europe.” 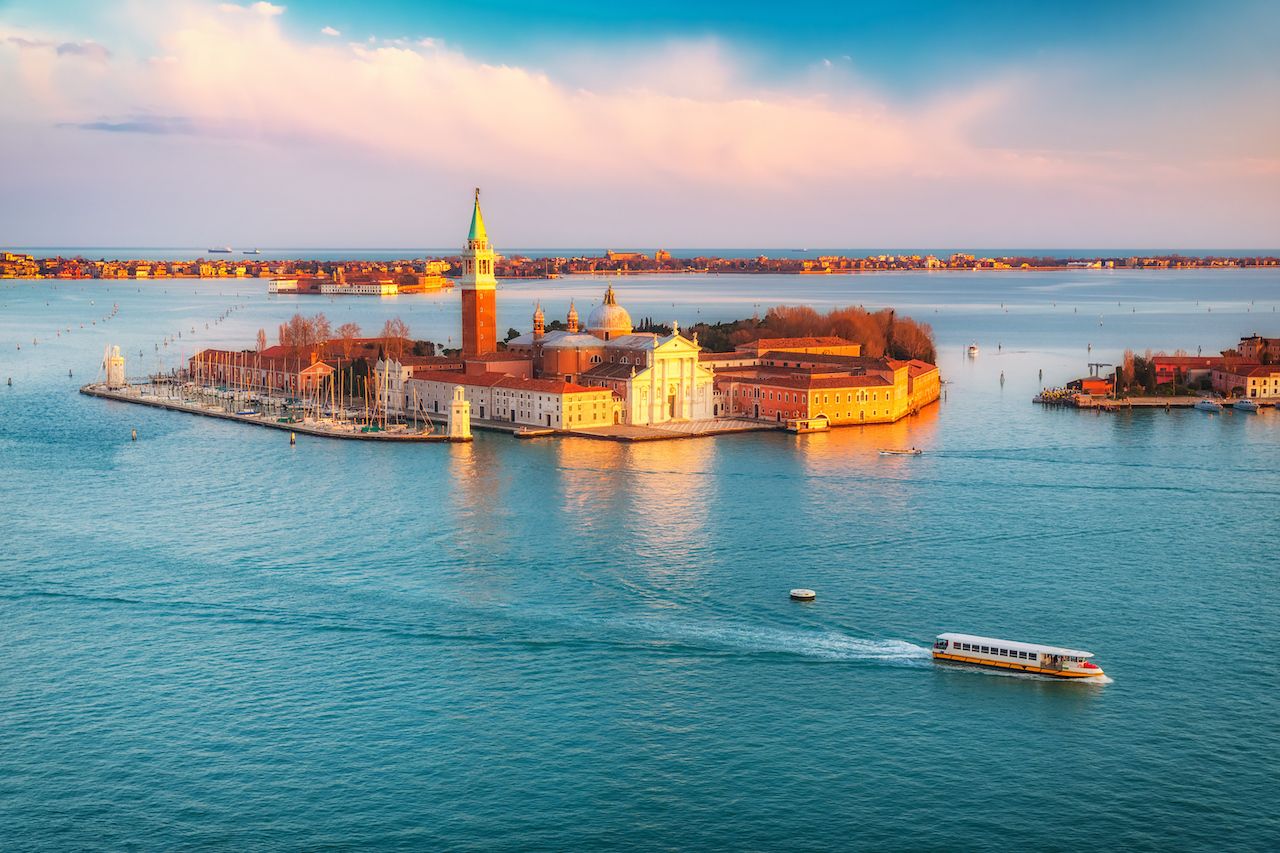 Other money-saving and crowd-dodging tactics include using the public Vaporetto service as your boat tour. The number 1 chugs down the Grand Canal giving you a view of ornate palazzo facades, and a well-timed trip back from the Lido can be used to appreciate sunsets over the city. St. Mark’s bell tower is popular for getting a view of the city stretched out below you, but the bell tower of San Giorgio Maggiore, just across the water from St. Mark’s Square, has a much shorter queue and has a view of Venice in its more poetic aquatic setting instead. The Fondaco dei Tedeschi, a newly opened department store in a refurbished 16th-century building, has a free roof terrace that overlooks the Grand Canal. You just need to book your 15-minute slot online. Finally, it may sound counterintuitive for budgeters, but hotel rooftop bars like that of Danieli provide spectacular views across the lagoon at a cost similar to that of St. Mark’s bell tower but with a fancy cocktail thrown in. 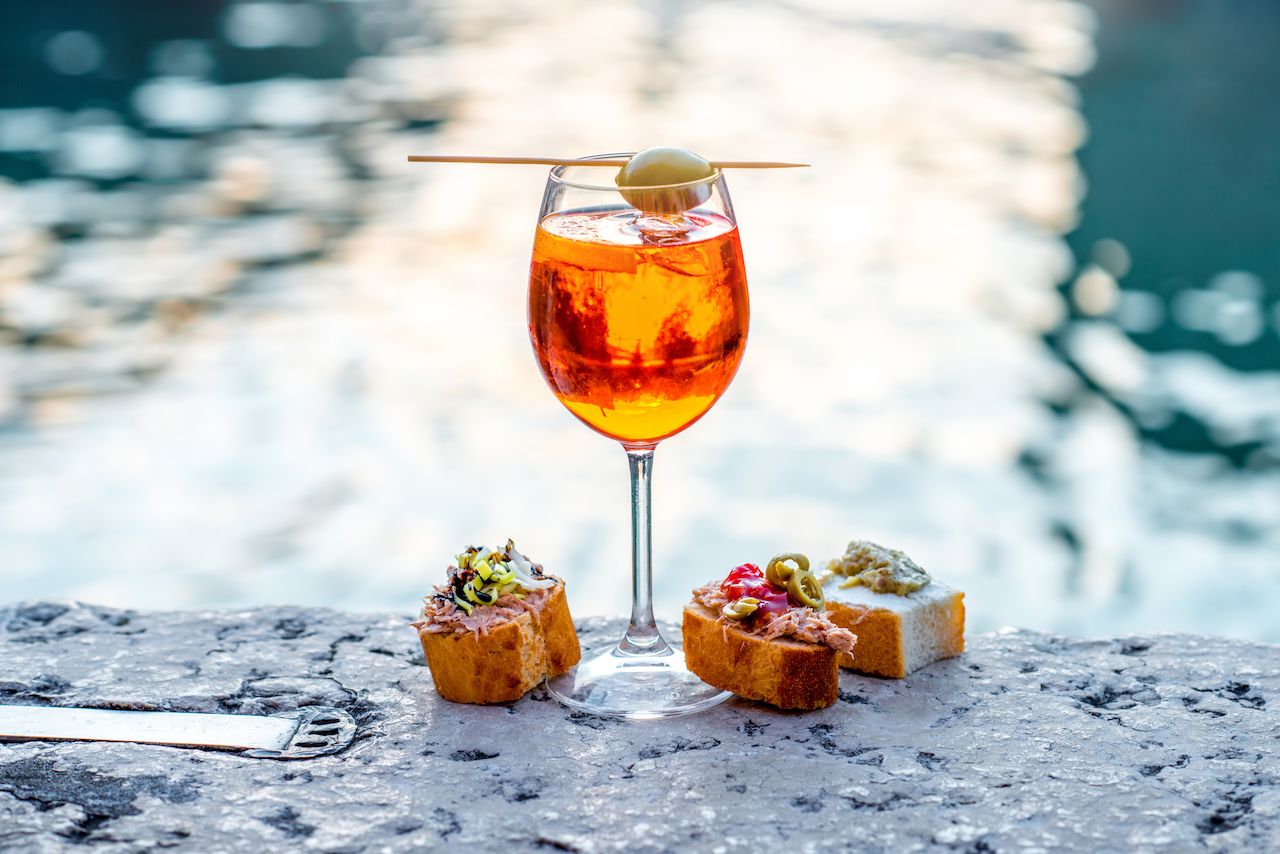 Bacari, or local Venetian bars, are the place to try Venetian finger-food specialties, cicchetti. Baccalà mantecato is a creamy mousse made from salted cod which is usually eaten on little pieces of toasted bread or on squares of polenta. Try it at Cantina do Spade, along with sarde in saor, which are sardines with onions, vinegar, and raisins. Bancogiro, near the Rialto, does a whole variety of crostini, toasted bread with toppings like gorgonzola and honey or prosciutto, and has seats on the Grand Canal.

For dinner, look out for places called osterie or trattorie and never be tempted into a restaurant by a waiter-punter on the street. Osteria Ruga di Jaffa, decorated with dark wood and Venetian flags, follows the custom of a counter displaying several plates of fried and grilled seafood from which you can make a mixed plate. On the upper end of the osteria scale, though still reasonably priced for the quality, is Osteria Boccadoro, serving fish from the lagoon or north Adriatic and vegetables from the restaurant’s own garden on a lagoon island.

For breakfast and afternoon coffee, follow the Italian example and stand at the bar to avoid incurring any “seating” charges. Venice has several historic pasticcerie for a breakfast that far outshines that of any hotel, such as Rosa Salva, which has been supplying Venetians with their calorific pastry fix since the 19th century, and Pasticceria Tonolo. A typical breakfast here would be a cappuccino or espresso and a well-filled croissant, rum babà, doughnut, or deep fried frittelle if it’s Carnival time. 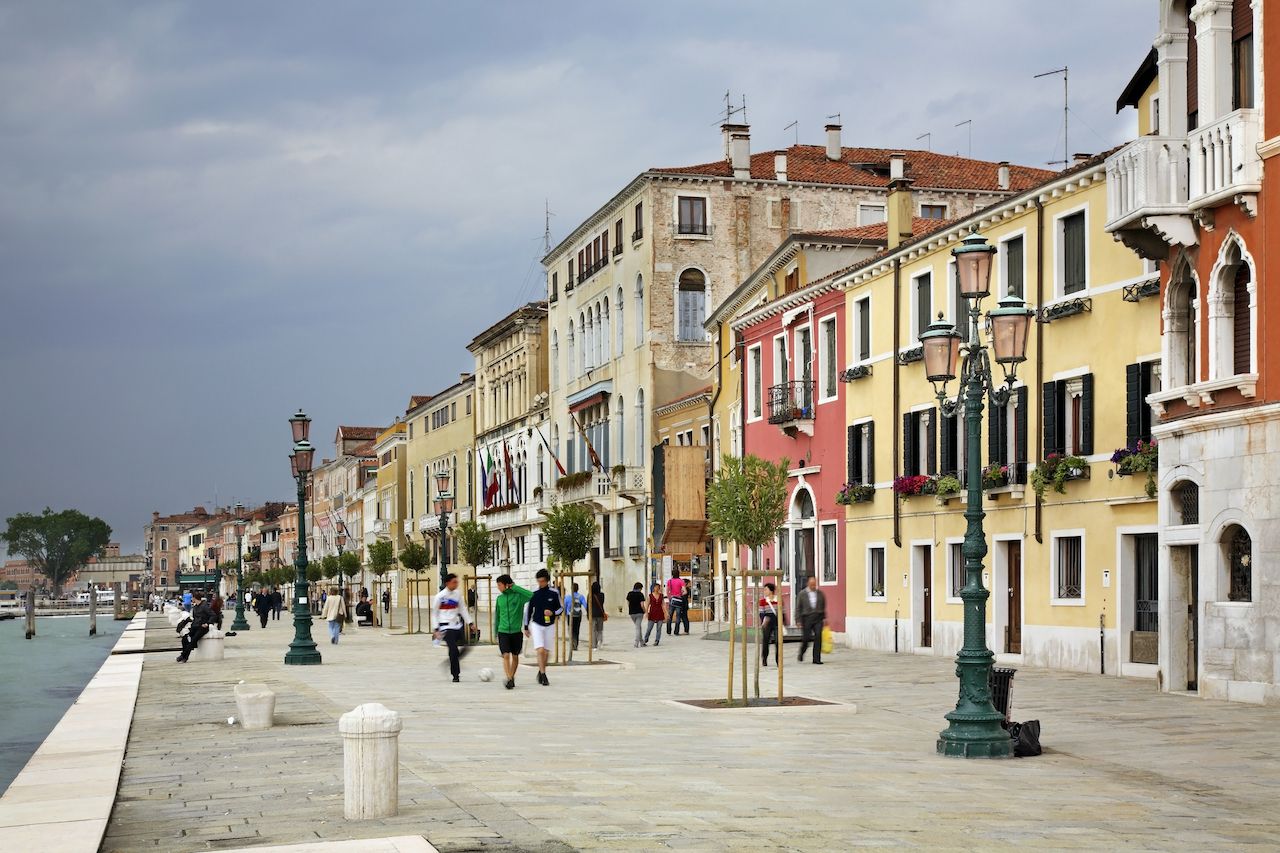 Along with overpriced food, tacky souvenirs, and interminable queues, the overcrowding of Venice’s narrow streets leaves visitors distinctly ruffled. The romance of the dark, labyrinth-like alleys is quickly lost when you’re stuck behind dawdling crowds or poked in the eye by an umbrella. Avoid these streets by heading out to areas like the Fondamenta delle Zattere, a wide promenade running along the Giudecca Canal, which always seems to be blessed by sunshine. There are benches to sit on and look out at the little houses of Giudecca Island or to use as a handy stopping point to eat ice cream from Gelateria Nico.

The Giardini della Biennale, out in the Castello area (the tail of the fish-shaped city), is a surprising oasis of green in a city characterized by alleys and tight-knit buildings. The nearby Serra dei Giardini is a greenhouse-cafeteria housed inside a pavilion originally built to house plants for one of the international exhibitions. Now, it sells plants, hosts art exhibitions, cultural events, and music performances, and has a cafe with organic products.

Accommodation is notoriously expensive in Venice. A room in a Grand Canal hotel can set you back over 500 euros a night. Many are turning to Airbnb for the answer, but sadly that has evolved from its origins as a house-sharing system into a lucrative business, so prices are high but the quality is often shockingly low. The middle ground is to stay in well-established small, family run hotels. 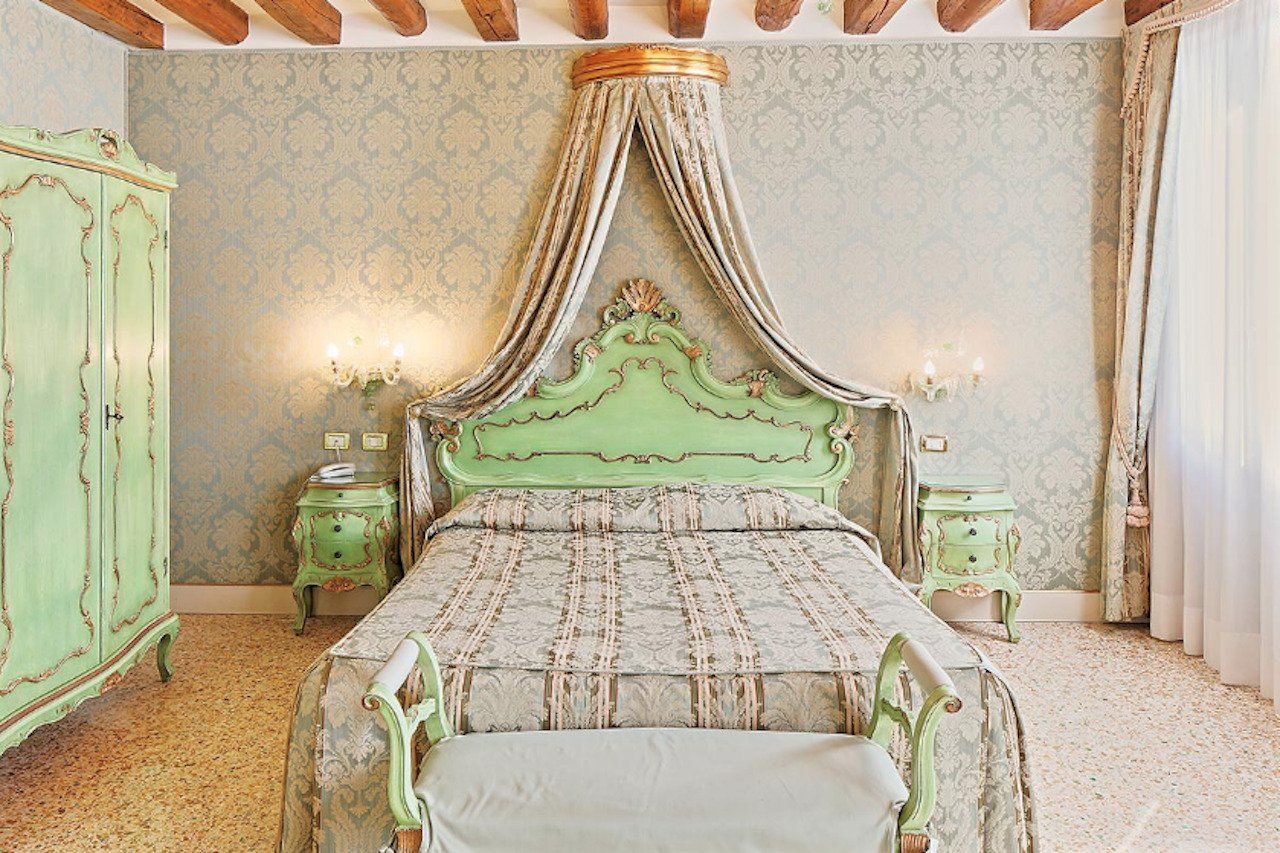 Ca’ Dogaressa, in the Cannaregio district, has elegant 18th-century Venetian decoration like brocaded walls and Murano glass chandeliers, and rates start as low as $85 in offseason. Close to St. Mark’s Square, Rosa Salva Hotel boasts the rare quality of spaciousness and is part of the historic pasticceria business. Rates start from $100 in the low season rising to $200 come summer. To lower costs further, We Crociferi is a hostel located inside a restored convent. It’s basic, but there is an arcaded cloister and spacious bar where music and culture events often take place.

Food + DrinkCicchetti Are Venice’s Answer To Tapas. Here’s Where To Try Them.
Tagged
Sustainability Travel Trip Planning Venice, Italy
What did you think of this story?
Meh
Good
Awesome

Venice Carnival: One of the World's Sexiest Parties