Situated on the southern third of Maine’s nearly 3,500 miles of coastline, Portland’s history and culture are deeply rooted in the sea. For centuries, the region of DownEast Maine that’s now home to the state’s largest city served as an important hub for fishing on the East Coast, drawing the Wabanaki Peoples during the summers before Europeans settled in the area. Once Europeans immigrated to Maine, the region’s fishing industry came to be one of the earliest successful European economic pursuits in the region.

But over the years, as the city grew in size and population, so did its offerings. Today, the fishing industry continues to thrive, with boats coming and going from the area’s ports in search of lobster, cod, haddock, and mackerel daily. But Portland is also home to a wide variety of arts, quiet residential streets lined with Victorian houses, and a number of world-class breweries — more per capita than in any other US city. And being just one hour by air from New York City, it’s a great place to explore during a long weekend.

Day one: Unplug and watch the world go by 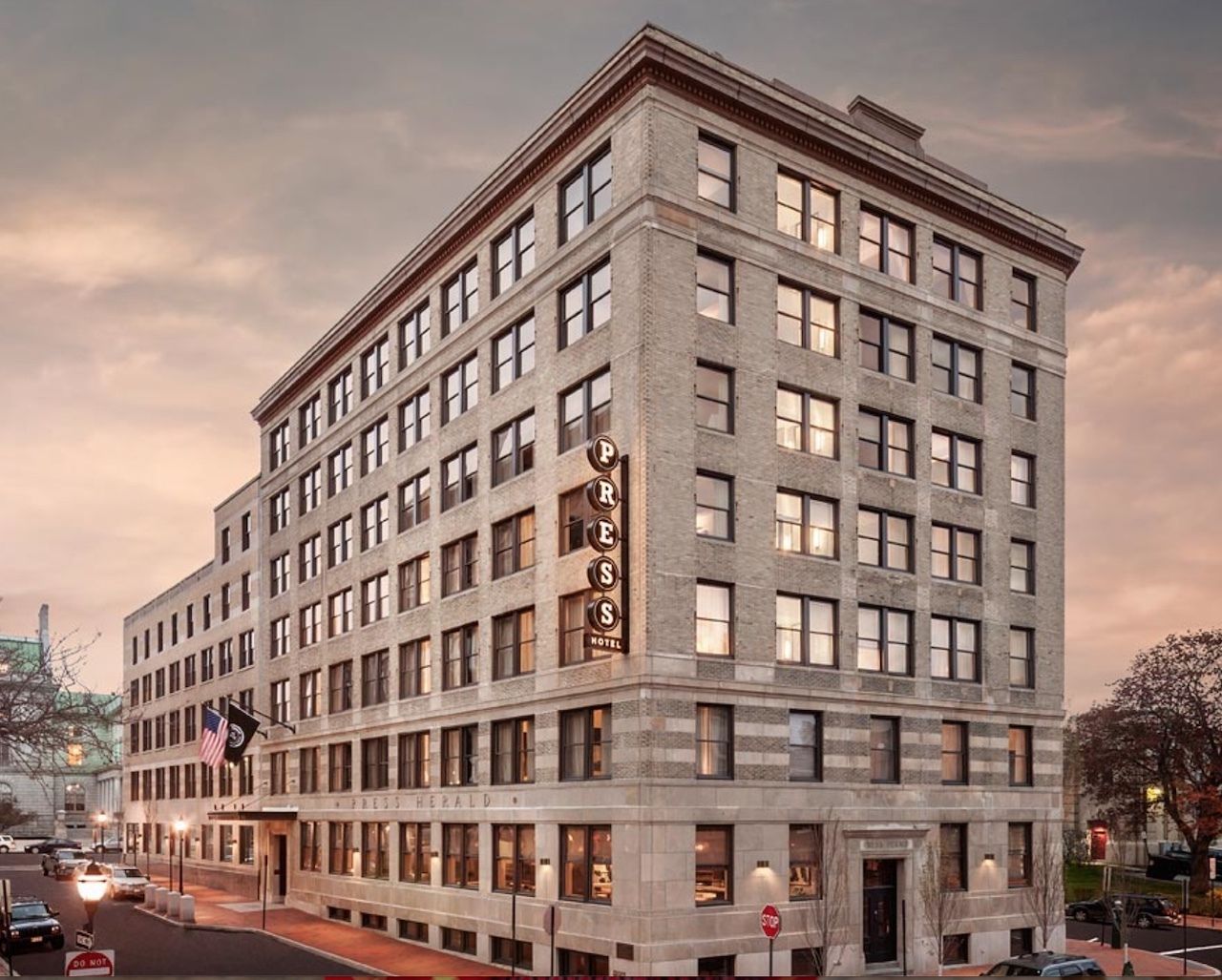 While Portland’s small size makes it a fairly walkable city, it is beneficial to have a car. From the Portland International Jetport, head to the Press Hotel, which is located in the Old Port District, to check-in and drop off your things for the weekend. As its name implies, the hotel was once home to the state’s largest newspaper — the Portland Press Herald — until 2010. The building retains a historic theme, with all of its architectural details and many artifacts, such as a scale used to weigh rolls of newsprint and the lettering on the building’s exterior, having been preserved.

Once settled, take the mile walk to Tandem Coffee Roasters on Congress Street for a cup of coffee and some baked goods. You won’t find people silently sitting around on their Macbooks at this gas station turned cafe — there hasn’t been WiFi since 2014. Instead, the cafe embodies the city’s sense of community, encouraging its patrons to enjoy conversation over their beverage. 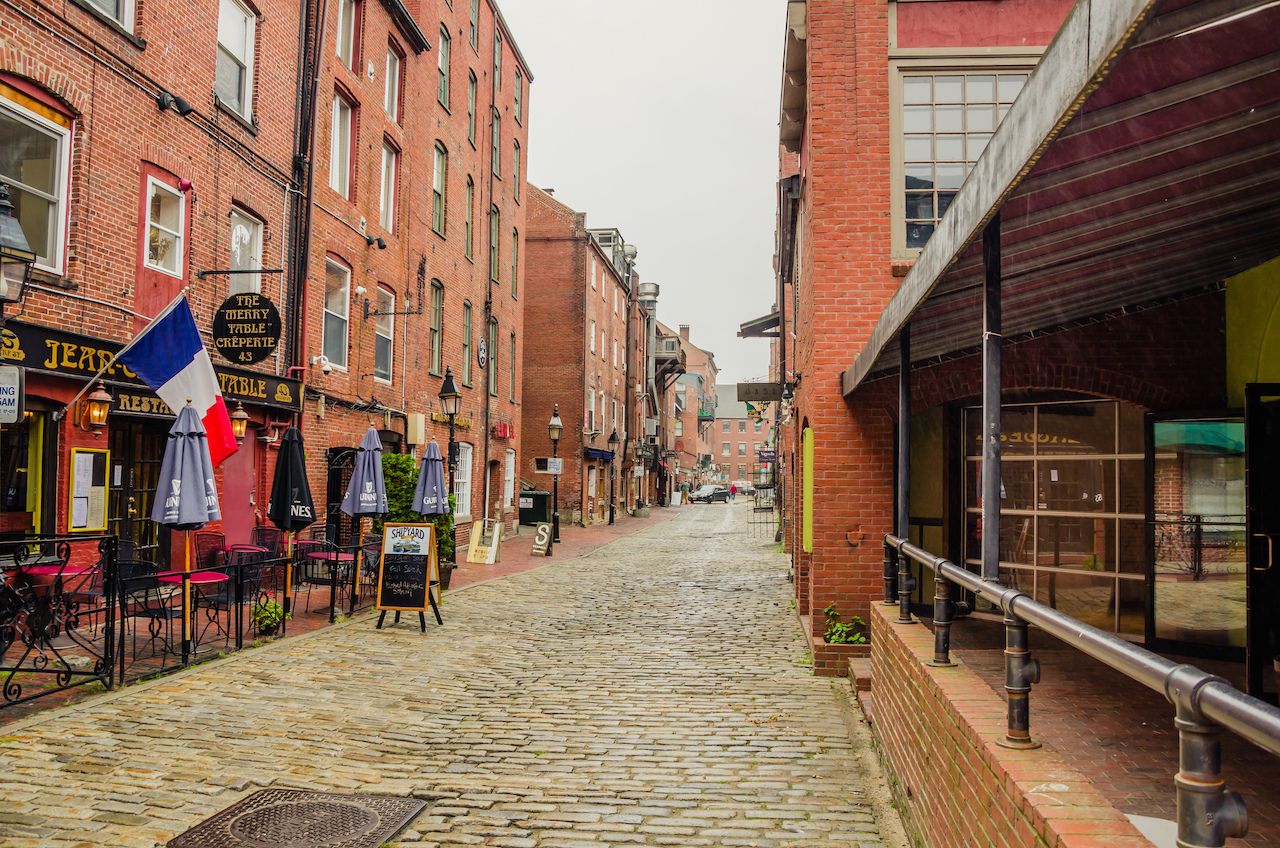 From there, slowly work your way through the historic Old Port District, whose cobblestone streets are lined with shops, cafes, seafood restaurants, and cocktail bars, and from where you can watch lobstermen unload their catch from the day. There are a number of self-guided walking tours, including one entitled “Walk the Working Waterfront,” which are perfect for those looking to dive a bit deeper into the area’s history.

For dinner, choose from one of the many restaurants overlooking the harbor, such as Liquid Riot or Dimillos, or head back to the hotel for a local and sustainably harvested meal at the Union Restaurant.

Day two: It’s all about the ocean 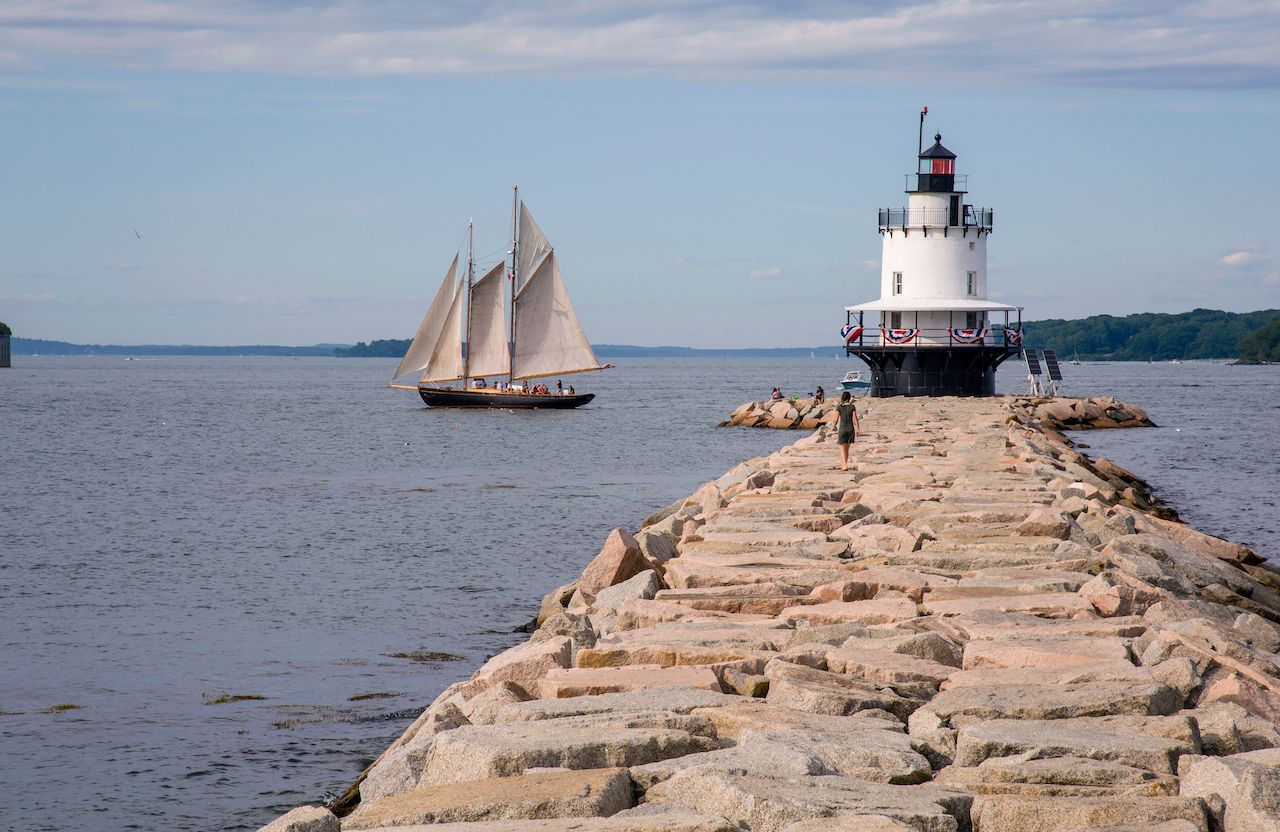 A trip to Portland wouldn’t be complete without getting out on the water. After a quick bite at the iconic Holy Donut, head back to the harbor for a sailing tour with the Portland Schooner Company. The cruise company operates three historic Windjammers, all of which were crafted and built in Maine between 1912 and 1931 and are on the National Register of Historic Places. During a two-hour public tour, guests will take in the sights and sounds of Maine’s craggy coastline, lighthouses, bustling ports, and wildlife. 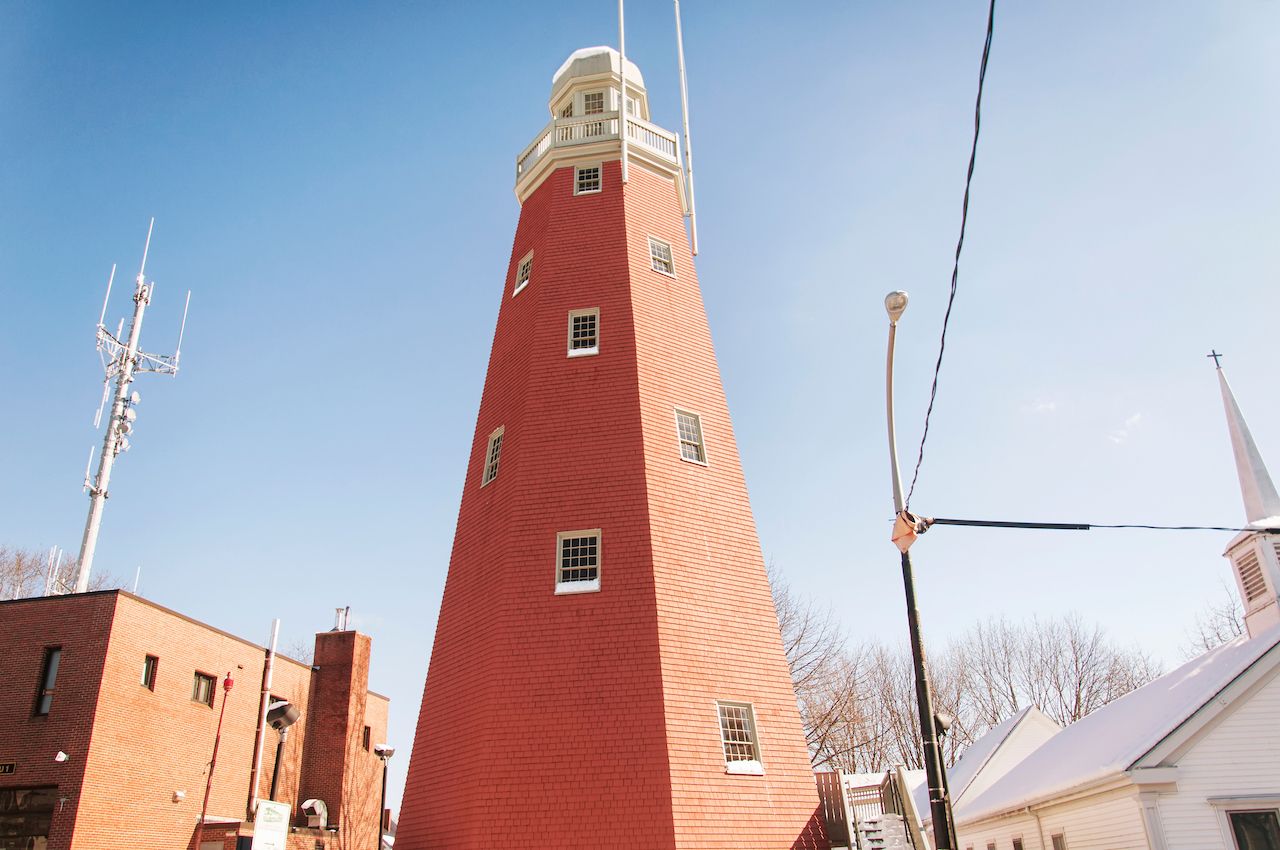 In the Munjoy Hill neighborhood, just north of the Old Port, stands the over-two-century-old, 86-foot tall Portland Observatory Tower. This octagonal structure was intended to serve as a communication tower for ships coming into the harbor. Today, the tower is the only remaining historic maritime signal station in the country. It’s on the National Register of Historic Places, is an official National Historic Landmark, and has been named a National Civil Engineering Landmark. While it can be viewed from outside, guided tours of the tower are available.

Before leaving Munjoy Hill, stop by to see the Stone Dragon — a granite sculpture of a dragon designed and carved by local artist Carole Hanson — in the Eastern Promenade. The original sculpture, which was commissioned in 1996 to be part of a new outdoor plaza dedicated to art and music in Congress Square Park, was designed to be a temporary installment that served as seating, as well as an artistic representation of a sea serpent. But the piece remained for 12 years and was a popular spot for tourists and locals alike. In 2008, the city transferred ownership to the East End Community School, and it was moved to its current location. In 2013, additional stone carvings were added to the sculpture to transform it into a dragon, with support from the original sculptor. Today, this piece of public art lives on as part of a larger landscaped garden, with locals and tourists visiting to enjoy the green space and spectacular views of Casco Bay. 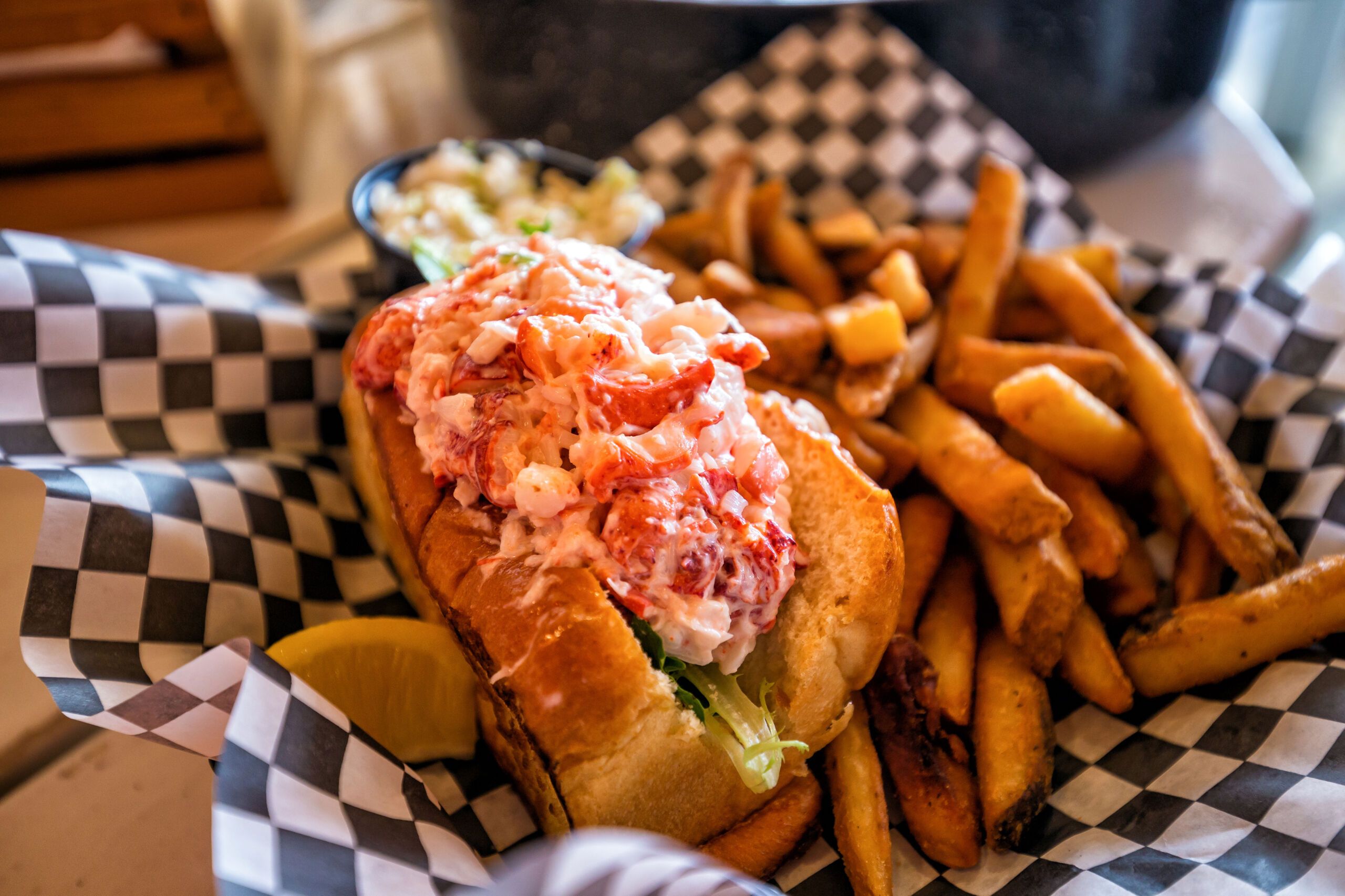 It’s probably no surprise that eating seafood is at the heart of Portland’s culture. At the Portland Lobster Company, which is the obvious dinner choice, visitors sit outdoors overlooking the harbor while enjoying lobster, steamed clams, and other local seafood. It’s not uncommon to see lobstermen hauling their catch for the day. For those who might be slightly less excited about seafood, the restaurant also has a selection of burgers, sandwiches, and salads.

If you’re not too tired after a day of exploring and eating lobster, the city’s nightlife has plenty to offer. The State Theater is the city’s go-to indoor music venue, hosting a variety of bands and artists from around the world. During the summer months, Maine State Pier, which has spectacular views of the water and skyline, also hosts music events. 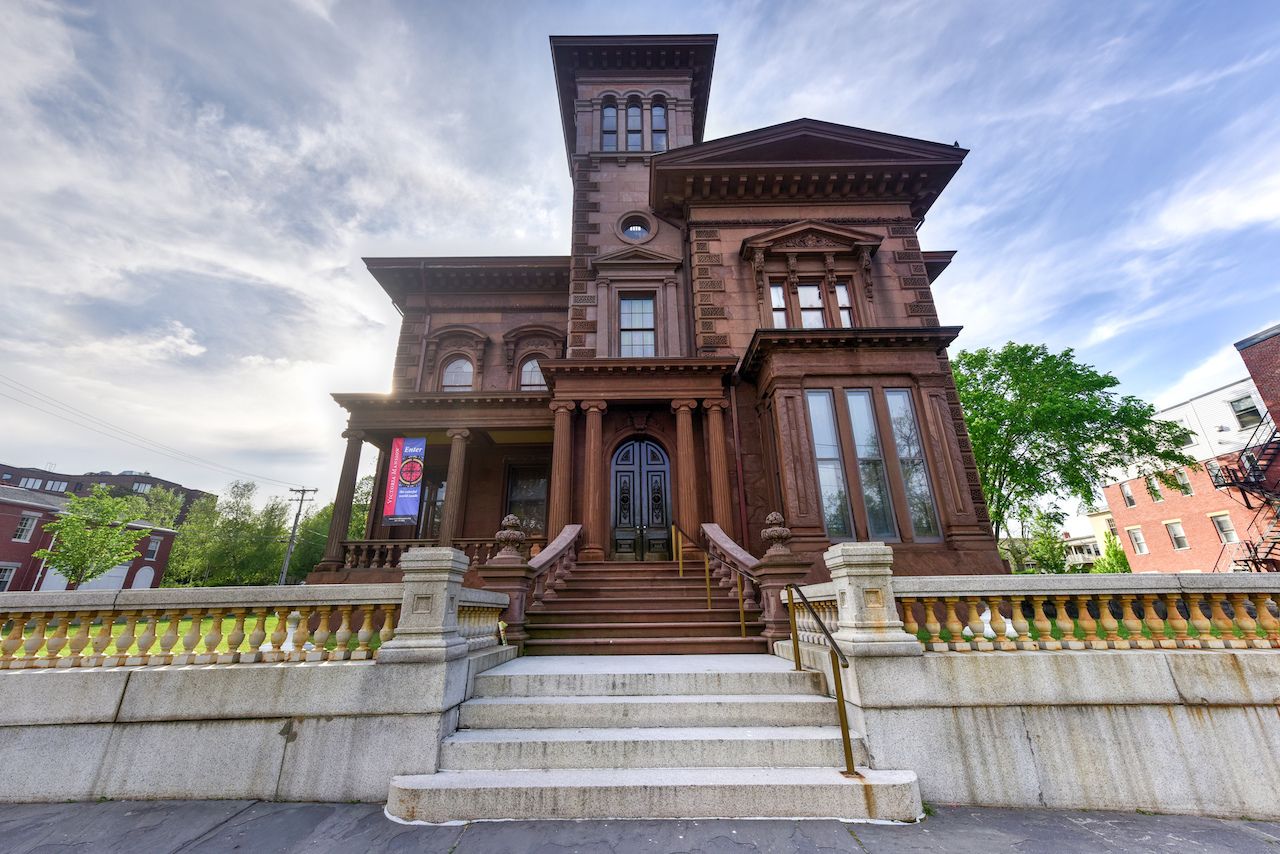 Before leaving the hotel, the Inkwell is a convenient spot to caffeinate and grab a small bite before your final day of exploration. In addition to drinks and pastries, the hotel cafe serves breakfast sandwiches, oatmeal, and even a blueberry waffle.

After breakfast, head to the Victorian Mansion, or Morse-Libby House, which was built in the mid-19th century. The Italian Villa-style architecture, designed by Connecticut-based architect Henry Austin, is said to be one of the finest examples of this type of architecture in the country. While the interior is currently closed to tours due to the pandemic, it’s still worth stopping by to admire from the outside. 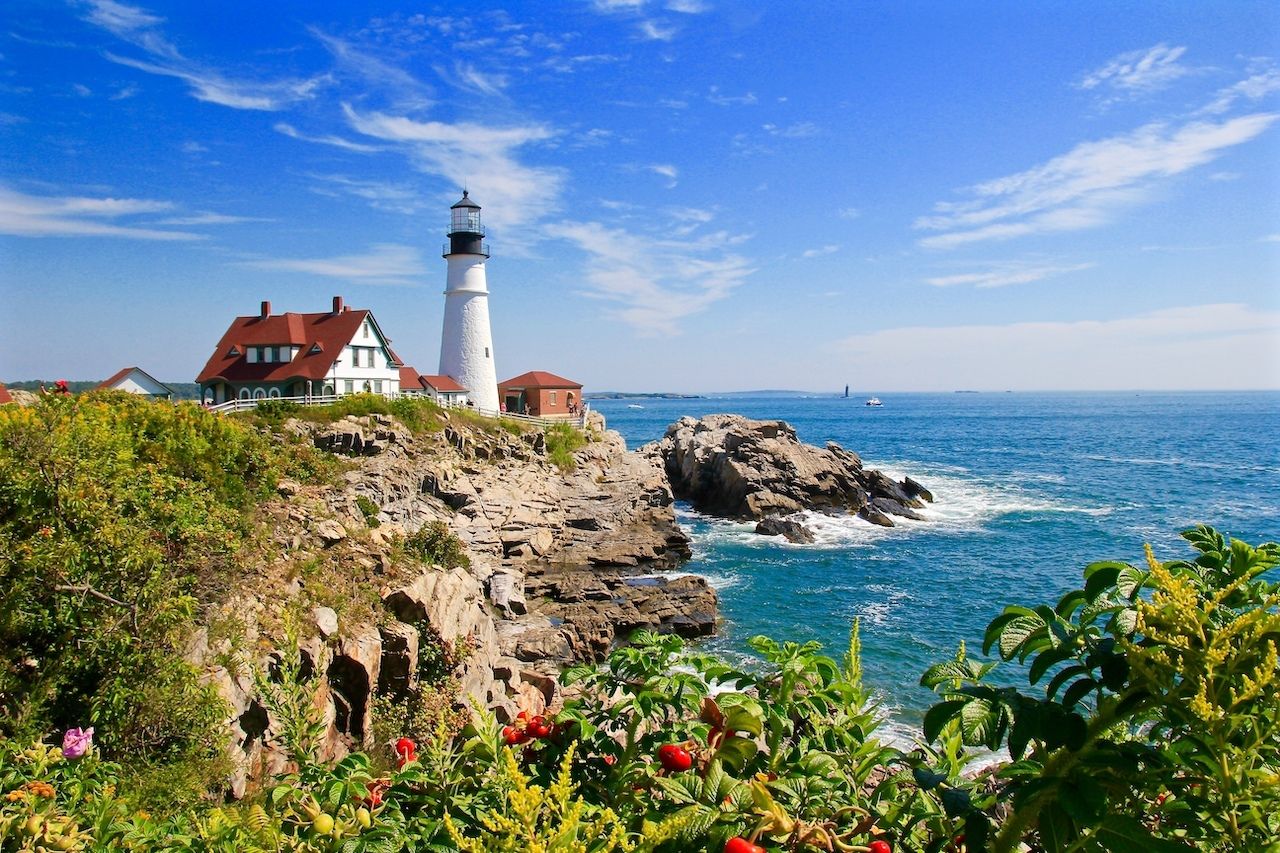 The Portland Head Light is arguably the most iconic and most photographed destination in the city. The original lighthouse, which was situated on the rocky shores of what is now Fort Williams Park, was first lit in 1791, making it the oldest in the country. Over the years, the building was modified and updated, including the addition of a keeper’s headquarters. While the lighthouse is still in operation today, there is also a museum that tells the light’s history through a number of artifacts and exhibits.

The remainder of your time in Portland can be spent in two ways — by visiting the Portland Museum of Art or by experiencing the city’s modern-day culture through a beer tour.

The nearly century-and-a-half-old museum features permanent and rotating exhibits across three buildings — all notable architectural achievements. Exhibits range from local to international artists, such as Winslow Homer and Andy Warhol, and are composed of over 18,000 pieces. The museum even features a free outdoor sculpture park as well as a variety of in-person and digital events. 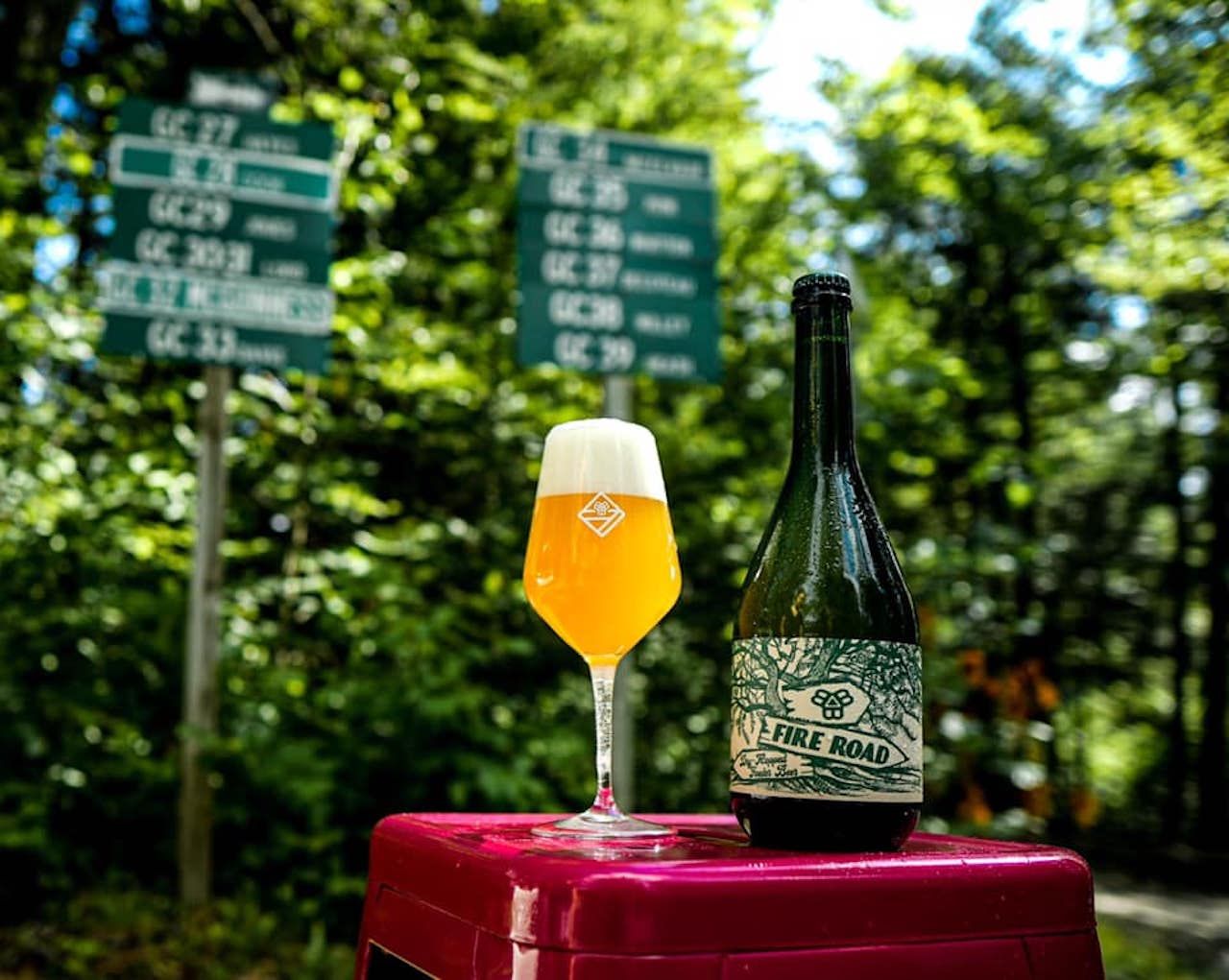 If you decide to opt for the beer-drinking route, there are a number of world-class breweries to choose from. With Bissel Brothers, Foundation, Allagash, Oxbow, and Austin Street, to name a few, it’s easy to go on your own brewery tour, or you can hop on an organized tour.

Epic Stays11 New England Lighthouses You Can Actually Spend the Night In
Tagged
Travel
What did you think of this story?
Meh
Good
Awesome

These Airbnbs in Portland, Maine, Showcase the Best of New England's Coolest City

7 Reasons Why Portland, Maine, Is the Ultimate Fall Destination

Where To See Art in Portland, ME