If 12 years of Murder She Wrote on television has taught us anything, it’s that living in beautiful Maine is the dream. Well, so long as you don’t specifically live in fictional Cabot Cove, dear Jessica Fletcher’s hometown with an alarmingly high murder rate. The state’s small coastal towns are some of the prettiest in the nation, and they make for tranquil destinations for travelers looking for a peaceful seaside escape. So, if you decide to take on a foliage-peeping trip around New England this fall, make sure to stop by some of Maine’s coastal small towns to revisit the charming vibe of the popular television series — and to chow down on some lobster, of course. 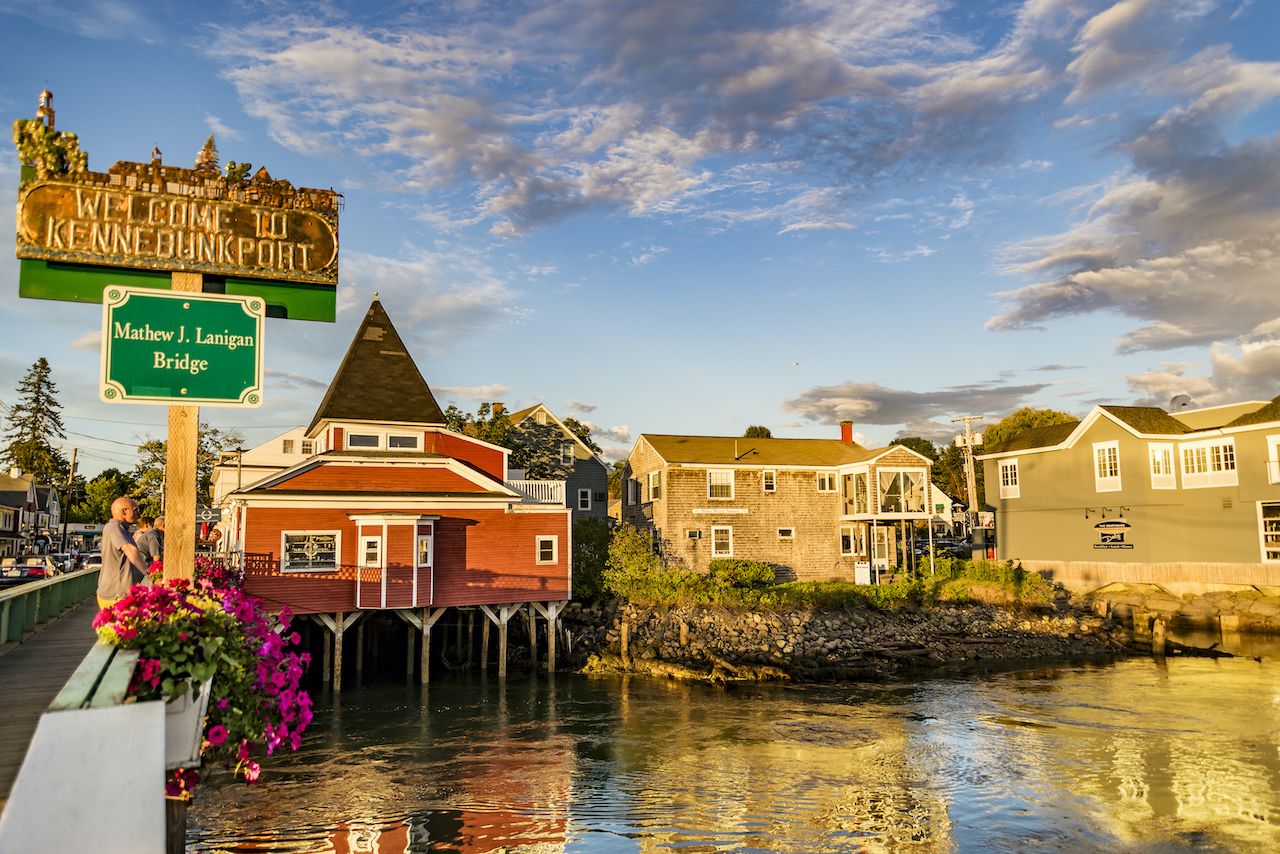 Kennebunkport is where the summer home of the Bush family is located, but don’t let that scare you — the town is not a hoity toity hub for the rich. Granted there are grand homes around, but many of these are former sea captain mansions turned into inns where travelers can rest their legs while checking out the views of the ocean. Because, of course, it’s all about the ocean in Kennebunkport.

The town was a seasonal destination for Native Americans for thousands of years before European settlements in the 17th century, and it became a center for ship-building in the 18th century. It was in the 19th century that Kennebunkport became a magnet for city-dwellers looking to enjoy the warm months by the sea, and it has remained that way ever since. The area’s beaches are perfect for a spot of relaxation, but if you want to be more active, you can take to the water in more ways than you had imagined — fishing, whale watching, kayaking, paddleboarding, surfing, and sailing are all available.

There’s also great boutique shopping and dining in town for those who are less interested in catching fish than in eating them — try The Clam Shack for some of the most celebrated lobster rolls in the country. If you can’t make it to Kennebunkport in the fall, try Christmas. The Kennebunkport Christmas Prelude is often touted as one of the best holiday celebrations in the nation with tree-lighting ceremonies, craft fairs, seafood chowder luncheons and lobster dinners, parades, and more. Kennebunkport is located only one hour and 30 minutes north of Boston, and just 40 minutes from Portland, ME. 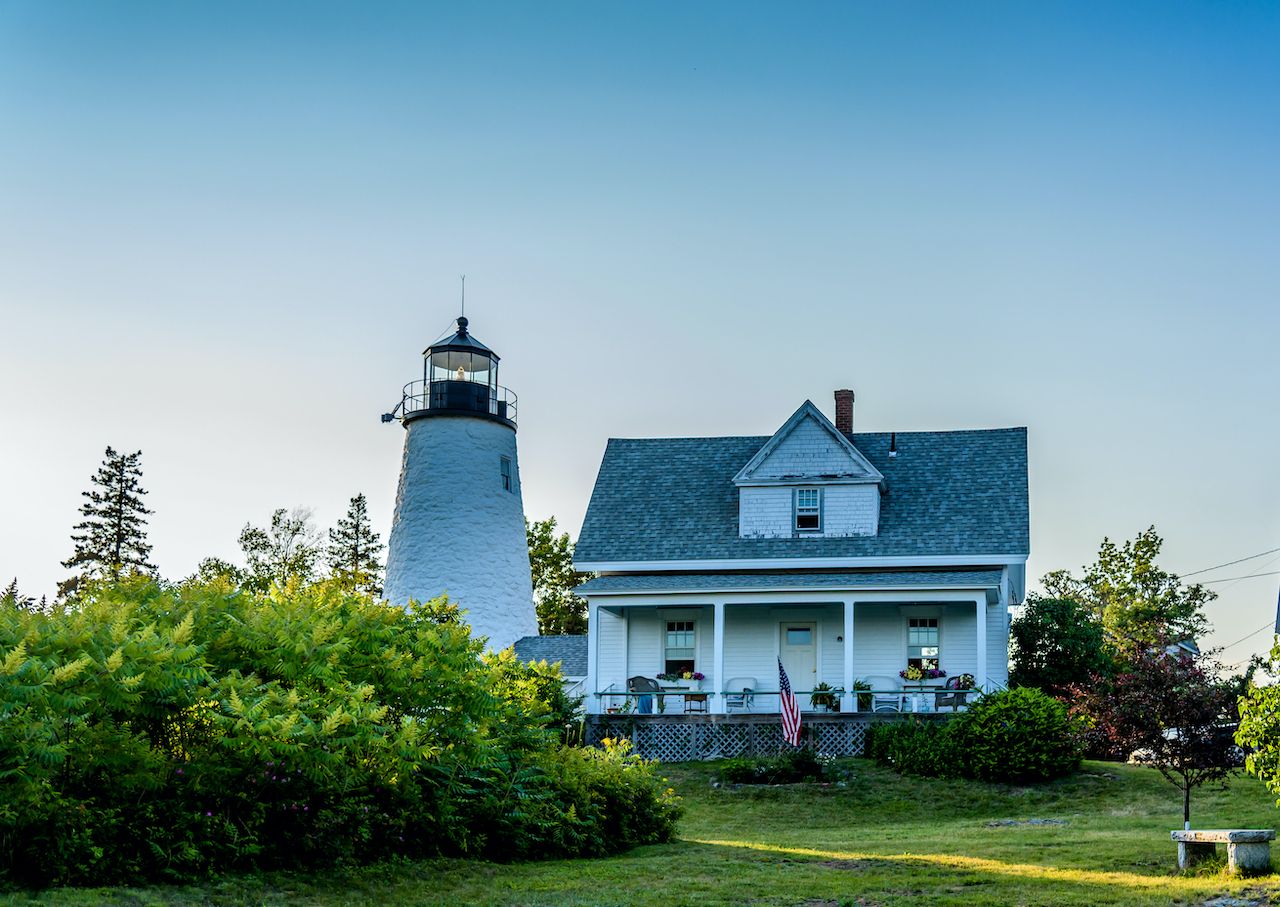 The village that was the actual inspiration for Cabot Cove, Castine could not have a more tantalizing slogan — “Under the Elms and by the Sea” really sets the scene for some serious New England magic. The village is a small but popular tourist destination located on a peninsula in Penobscot Bay about 250 miles from Boston and 140 miles from Portland. The main appeal is clearly the beauty of its old homes and grand inns like the 19th-century Pentagöet Inn, but the beaches, lighthouses, and historic sites are just as alluring as the New England architecture.

Take a theme cruise to see the area’s many lighthouses, including Acadia National Park’s famous Bass Harbor Lighthouse (the park is less than 50 miles away), and to get some of that fresh sea air everyone raves about. Being one of the oldest towns in the state, Castine is a great place for those who want to add a touch of culture to their trip. The village is on the National Historic Register and 1884 Fort Knox is just a 25 minute drive away. While you’re there, take in views with a side of great engineering at the Penobscot Narrows Bridge and Observatory — taller than the Statue of Liberty and the tallest public bridge observatory in the world, it’s a local attraction that’s hard to miss. 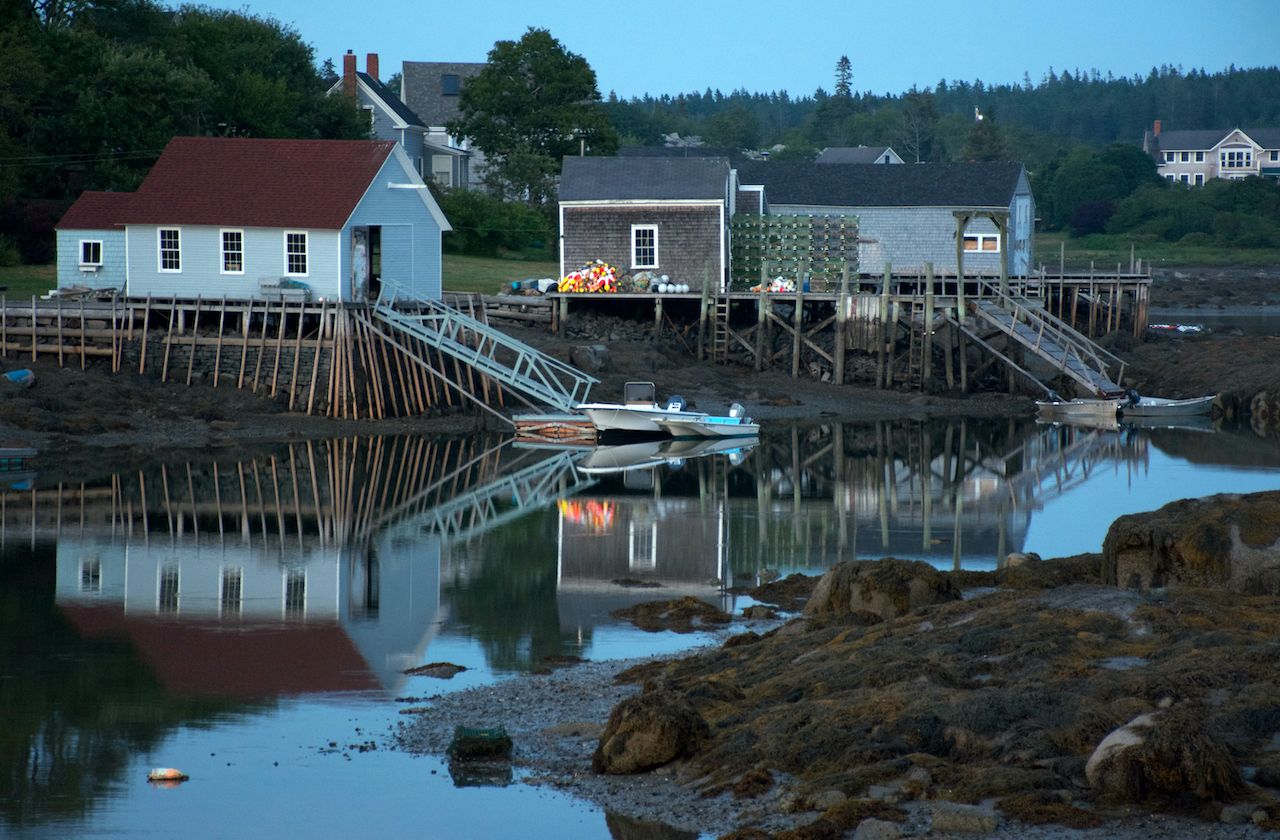 To get away from it all, leave the mainland behind and head to the island of Vinalhaven. Also located in the Penobscot Bay, you need to hop in the ferry in Rockland to get there (the crossing is one hour and 15 minutes), making the town of about 1,200 permanent inhabitants a little less busy than other pretty coastal villages in the state — even in the high season.

That’s not to say that Vinalhaven is overlooked; there are many parks and preserves on the island with over 17 miles of trail to hike, so day visitors are a common sight, but you won’t encounter any large crowd. For a true Maine experience, check out the Browns Head Lighthouse on the northwest side of the island, only eight miles away from the village. The tower is closed, but you can explore the grounds and take in the spectacular views.

The main industry in Vinalhaven is lobster fishing, and the town is one of the top lobster landing ports in the state with 200 lobster boats moored in Carver’s Harbor. And that means there’s some good grub to be had. For a casual but delicious lunch, head to food truck Greet’s Eats for lobster and crab rolls. 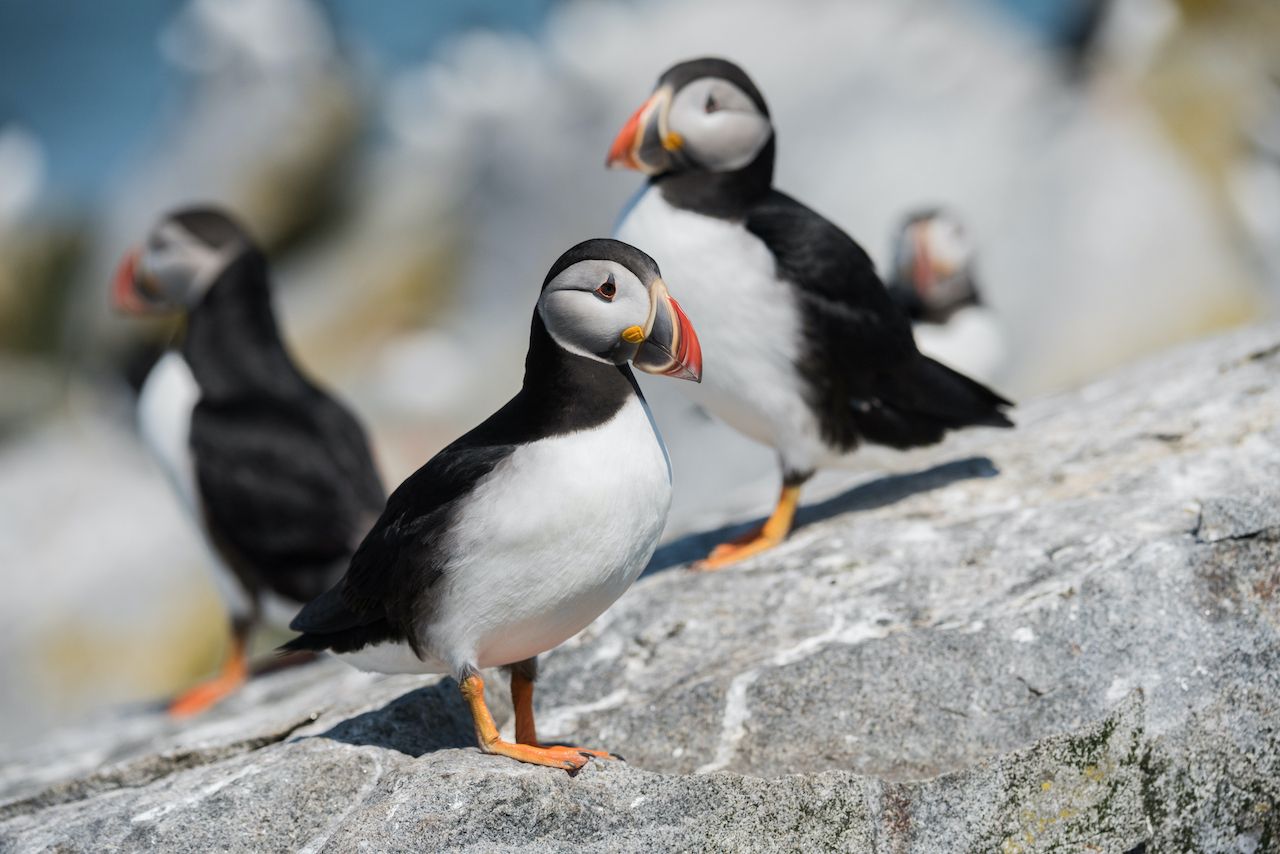 Only 30 miles from the Canadian border in New Brunswick, Machias is over three and a half hours away from Portland and over five hours away from Boston. While the rest of Maine is lobster and crab crazy, Machias is obsessed with blueberries — there’s even a summer festival dedicated to the small fruit that’s been going on for 45 years, with music, comedy, craft fairs, pie-eating contests, cooking contests, and more.

There are historic sites worth checking out in and around Machias, but the local fauna is the real clincher for potential visitors. Take a boat tour to Machias Seal Island in the lower Bay of Fundy, an island shared by the US and Canada that serves as a migratory bird sanctuary, to get the chance to observe Atlantic puffins, Arctic terns, razorbills and many more — over 100 species have been spotted there. The island is closed to visitors in June and July to protect the nesting birds, but you can visit outside of these two months. Note that the island is very popular with nature- and bird-lovers, so you won’t have the place to yourself.

Beyond the birds, the still-functioning octagonal lighthouse is worth a visit, and make sure to wave to the Canadian lightkeepers who are stationed there. Several companies offer tours and most depart from the small town of Cutler just 15 minutes by car from Machias, but think about booking in advance since it’s a popular day trip. 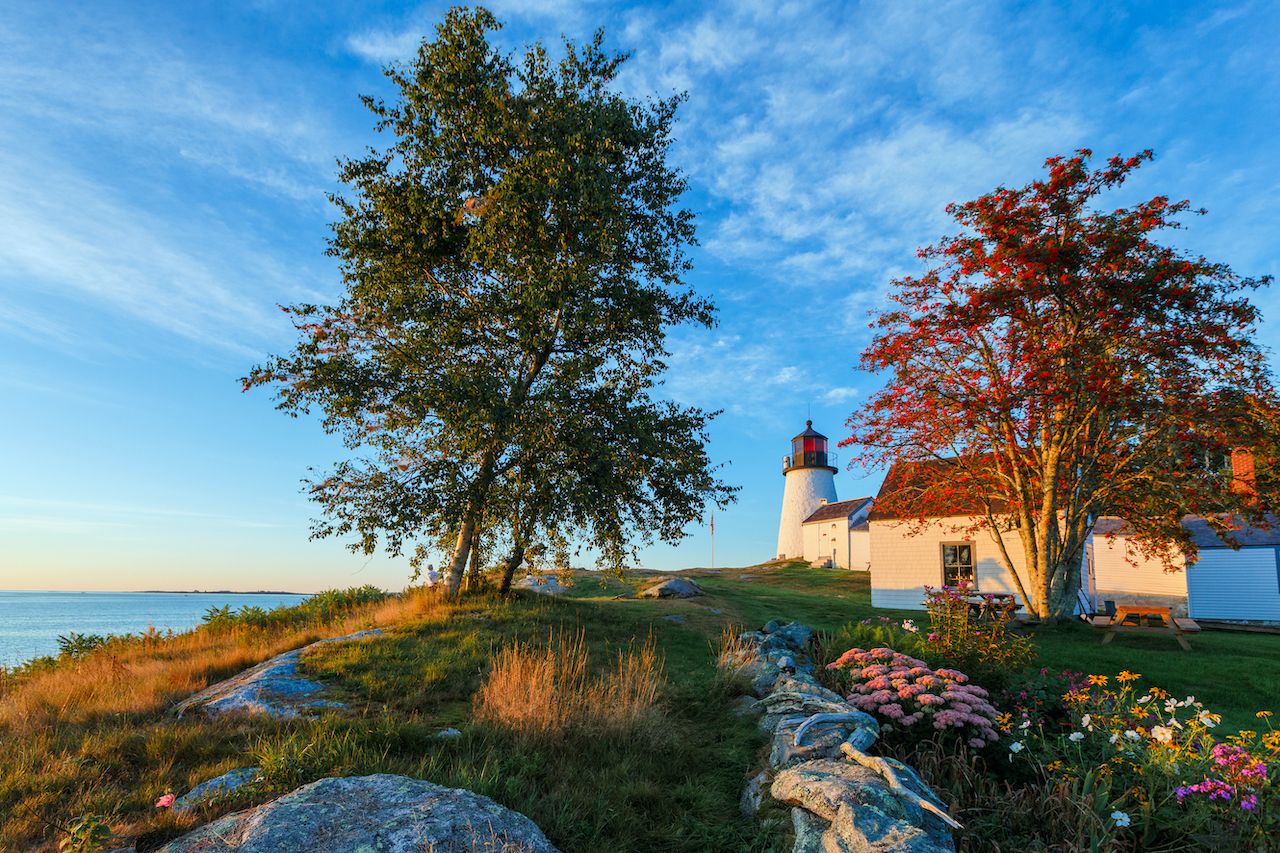 Boothbay Harbor has a serious reputation for being very scenic, so much so in fact that it’s a well-known wedding destination for those who want the craggy shorelines and traditional lighthouses as backgrounds to their special day. But even if you’re not getting hitched, you’ll enjoy this small town, whether outside on one of the many boat excursions leaving its harbor daily, on nearby Burnt Island for a tour of the lighthouse, on its more than 20 miles of nature trails, at its famously stunning botanical gardens, or inside in the art galleries, unique shops, theaters, and arts and crafts markets.

If you’re passionate about maritime history and tradition, or if you just enjoy wooden boats, visit during the annual Windjammer Days that take place in June every year to see some of the most beautiful ships in this corner of the Atlantic Ocean. Christmas is also a particularly good time to visit as Boothbay Harbor goes all out during its Harbor Lights Festival with more than half a million lights strung all over the place, including on sailboats that parade through the harbor and bring Santa to town. Boothbay Harbor is about one hour from Portland and less than three hours from Boston. 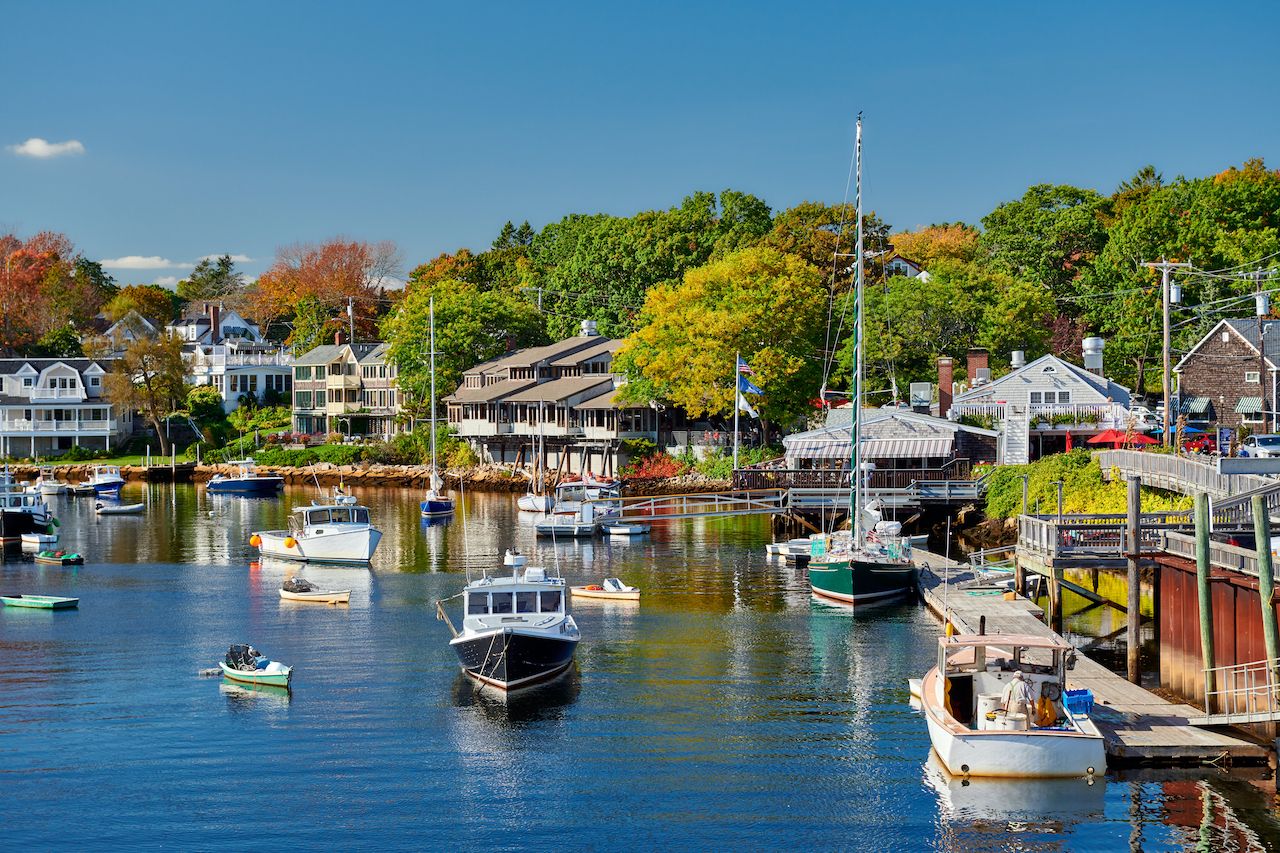 Ogunquit is on the southern Maine coast, just 50 minutes southwest of Portland and only one hour and 20 minutes from Boston. It’s therefore a very accessible vacation spot for city folks, and it has everything one hopes to find to relax during their time off work: miles of sandy beach and a trolley system that allows you to explore without the need of a car. And if you’re the active kind, you won’t even need to get in the trolley because everything in Ogunquit is within walking or biking distance.

Marginal Way is an easy coastal walking path that connects Ogunquit to the picture-perfect lobstering village of Perkins Cove, and it delivers on amazing views. Once in Perkins Cove, enjoy the traditional clapboard homes, visit the locally owned shops, and get some food in you, whether lobster or saltwater taffies. If you’re keen to get in the water, there’s some good surfing at the Ogunquit Rivermouth, and the Ogunquit River is perfect for an afternoon of kayaking.

Of course, like every good coastal town in Maine, there are boat tours available to see lighthouses, whales, or go fishing, but Ogunquit is more than just a seaside destination — it’s also very artsy. So, if you want to shake it up a little, check out the Ogunquit Museum of American Art and attend a performance at the highly acclaimed Ogunquit Playhouse. 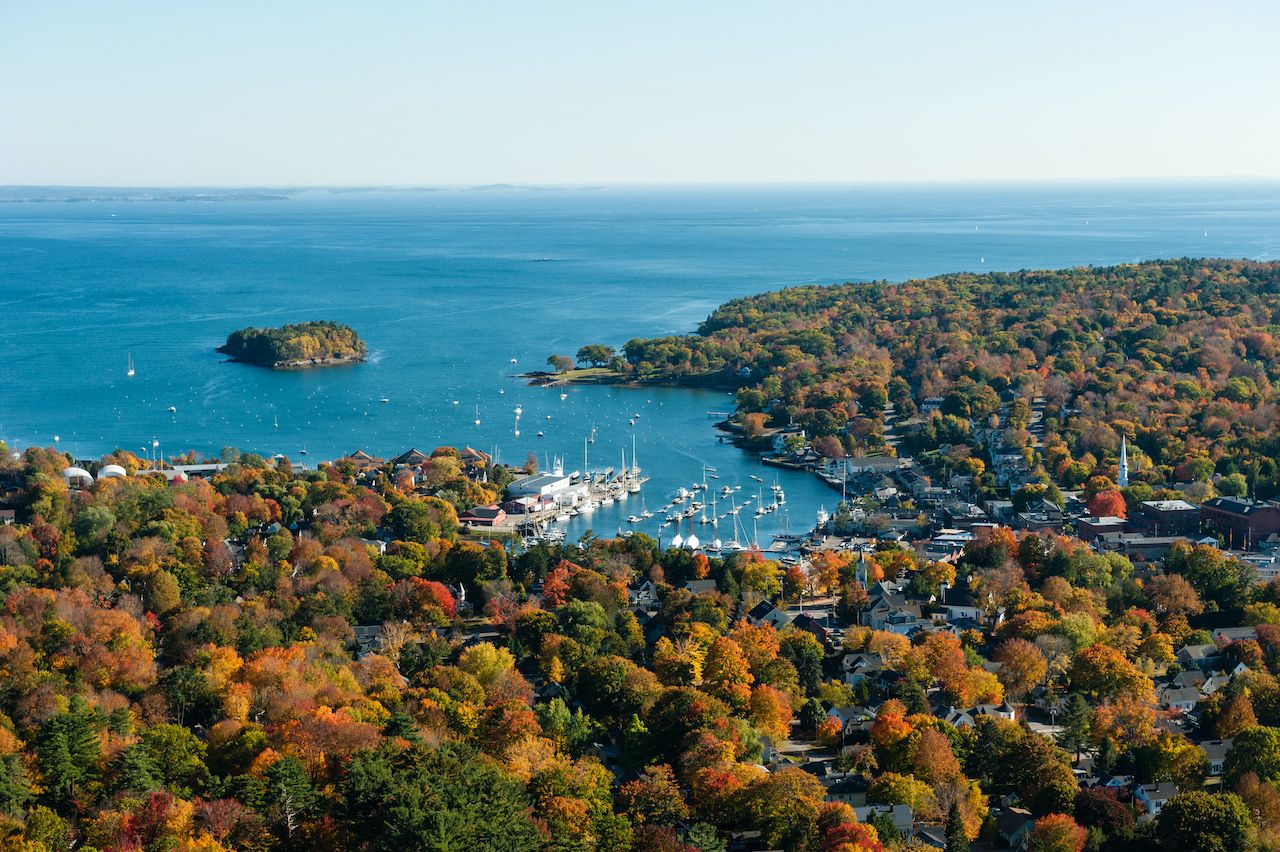 A very popular destination in the summer (the population of the town triples during July and August), Camden is even better in the fall — and not only because it’s much, much quieter. The coastal town of Camden is bordered by hills, so it’s a stunning place to go foliage-peeping, and the best way to enjoy the red, orange, and yellow hues of the season is to hike Mount Battie in Camden Hills State Park. From there, the view of the town, Penobscot Bay, and the surrounding hills will make you weak in the knees (the hike is short and of moderate difficulty).

If you’d rather enjoy the scenery from the water, rent a sea kayak and do your own thing, or take part in a tour that will take you around nearby Curtis Island. If you have no intention of exercising on your vacation, hop in a schooner for an excursion or tour around Penobscot Bay — if you’re lucky, you’ll be allowed to steer and raise sails.

Camden is a little upscale, but don’t let that keep you away; strolling around the town center, visiting the beautiful 1928 public library, hiking, spending time on the beach, and checking out lighthouses won’t cost you a penny and will deliver a perfect coastal Maine experience. If you can’t make it in the fall, visit during winter when the area’s ski hills come alive. Camden is less than two hours east of Portland and three and a half hours away from Boston.