For people who menstruate, it can be frustrating to start a period while on vacation. Most adults use tampons, which have to be refreshed frequently and disposed of in an appropriate place like a trash can. And then, perhaps most importantly, once they run out, tampons or pads need to be replaced — or you’ll be stuffing toilet paper down your underwear. There might be a solution to these travel woes, however: the menstrual cup.

While there are many alternatives to tampons that travelers can use, the menstrual cup might be the most convenient. Though it’s still not as popular or as widely available as tampons or pads, the menstrual cup is extremely efficient. Once inserted, the small rubber cup collects the menstrual fluid, and it just needs to be emptied every 12 hours or earlier depending on your flow, while it’s recommended that tampons be changed every four to eight hours. The risk of toxic syndrome is rare in users of menstrual cups compared to that of tampons (only two cases have been reported, in people who left the cup inserted for 7 days.)

If you’re hiking or camping, handling a period can be especially messy and inconvenient. Long bus ride in a rural community, an extensive kayaking trip, or an overnight drive would also be difficult environments to find a bathroom where one could comfortably and privately replace a tampon and wash up afterwards. With the menstrual cup, you can have the option to wait a longer period of time until a bathroom becomes available.

Once you get to a bathroom, you simply dump the contents and use water and soap to wash the cup and your hands before reinserting — and because most outdoors enthusiasts carry a bottle of water and a bar or small bottle of liquid soap with them, this is achievable in even the most remote locations.

Plus, there’s no reason to stress about finding a store to buy more pads or tampons once you run out. This might not be a serious worry in modern cities, but there are plenty of locations where travelers could find it harder to replenish their supplies.

And there’s another upside: It won’t take up space in your luggage, a huge plus for travelers packing economically (another option is to pack period underwear, like Knix underwear, which absorb the menstrual fluid, but you would need ready access to washing machine in order to consider this option.)

“It’s so small and barely takes any space in my luggage. I have it in my toiletry bag with my makeup, toothbrush, and skincare. It’s got a protective cover, and you only have to pack one because you’re just using the one throughout the duration of your period, versus throwing away multiple pads or tampons daily,” Amanda Meeks, a travel blogger who recently wrote a thread on Twitter praising the usefulness of the menstrual cup while traveling, tells Matador Network. 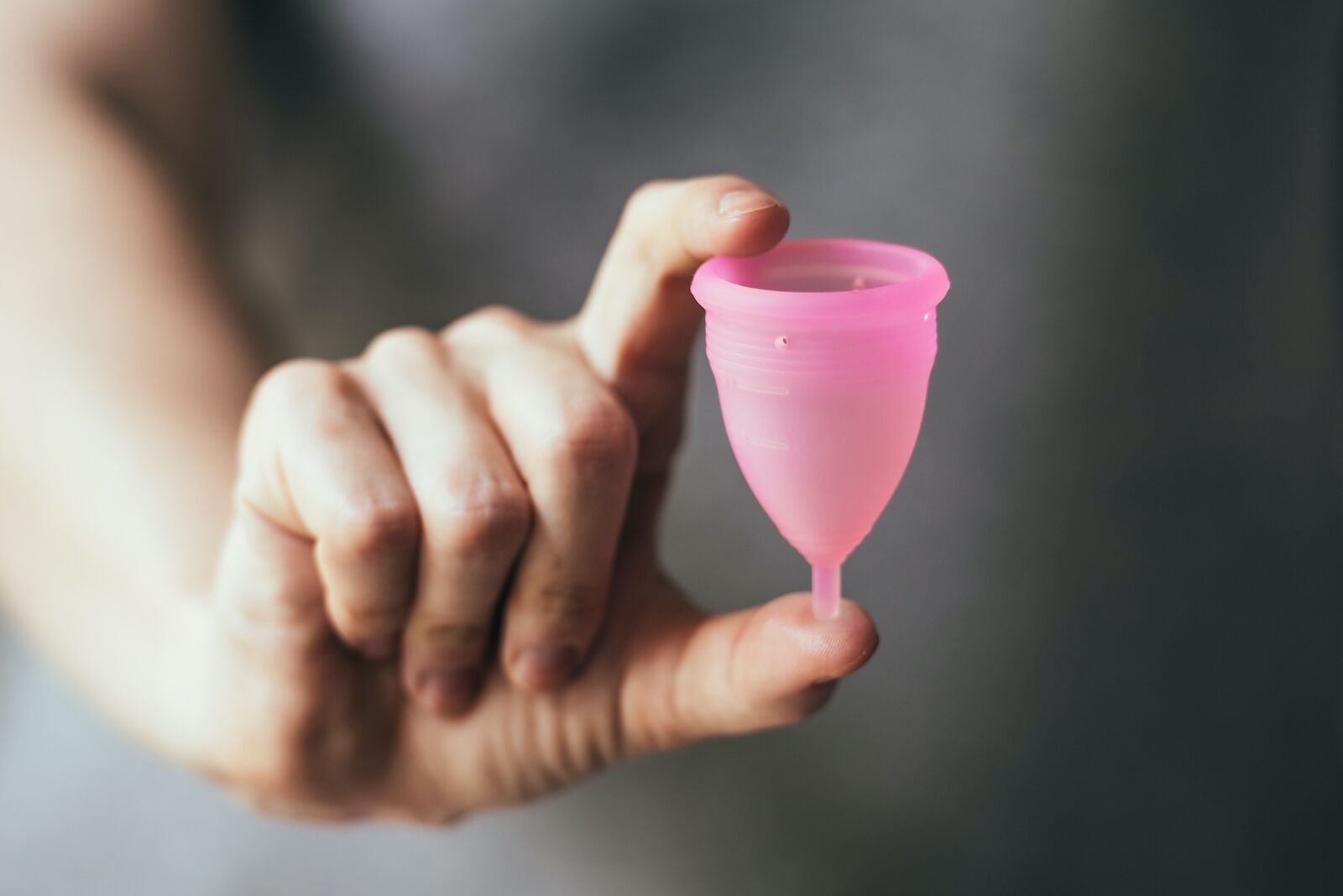 Meeks waits until the end of the day, empties the cup, cleans it with soap and water, and replaces it. Of course, when users need to empty the cup will depend on their personal flow, and most brands of menstrual cup come in a variety sizes to fit diverse body types. In terms of fit, the Diva Cup, which Meeks uses, has a slim nub hanging from the bottom of the cup, which is supposed to make it easier to grip and remove. It can be trimmed down until the cup fits comfortably.

“​​I put it in for the first time and sat down and basically said ‘Oh I can feel that,’ and started just trimming that nub back until I could no longer feel it. You don’t need the nub to get the cup out by any means, but I think it’s supposed to make it simpler,” she explains.

As anyone who has used one knows, a tampon can feel stiff or irritating, so for people who take part in a variety of outdoor activities while traveling, a menstrual cup offers comfort that feels a world away from a chafing tampon.

“I’ve used it while hiking, running, scuba diving, surfing, at aerial and yoga classes, and on camping trips,” adds Dylan York, a content strategist at Matador Network, who has used a menstrual cup for nearly five years.

It’s just as easy to remove and store once your period ends. When her cycle ends, Meeks boils it to keep the cup free of bacteria, then replaces its protective cover until it’s needed again (this step of the process would of course require access to boiling water, which in some places, can pose a problem, and might be considered a drawback).

Meeks also appreciates that the menstrual cup is more environmentally friendly, as it creates less waste than tampons. In fact, that’s the primary reason that Meeks switched to a menstrual cup.

“I was trying to see what easy things I could do to reduce waste in my life and did some research and that was one. You literally don’t throw anything away, you just wash it at the end of your period,” she says.

While a more sustainable approach to periods, that saves money and space in your luggage, is probably incredibly enticing to people who frequently travel, there are some downsides to consider.

“I’ve used a cup once. There’s definitely a learning curve, and my first thought afterward was how awful it would’ve been to try to use, for the first time, on an airplane, while camping, in a restaurant bathroom, or really any public place, especially if the sinks are separate [from the stalls],” Matador Network’s senior staff writer Alex Bresler, who travels at least twice a month, tells me.

If you’re planning to switch to a menstrual cup to use on your next adventure, you should consider testing it out before you leave to make sure you have the right fit and know exactly how to use it. Otherwise, whether you’re planning a minimalist trip backpacking in the wilderness, or want to spend a month at sea, where convenience stores are non-existent, a menstrual cup might turn out to be a blessing. Not only will it save you space, and help save the environment, it might bring you peace of mind, too.

Wellness9 Tampon Alternatives To Take Traveling With You
Tagged
Female Travel Lifestyle Travel
What did you think of this story?
Meh
Good
Awesome