The picturesque city of Nara lies in the Kansai region of Japan, forming a triangle with its more famous neighbors of Kyoto and Osaka. As the country’s first permanent capital, it’s a city with a huge historical and cultural significance — as is evidenced by its eight impressive UNESCO World Heritage sites. Yet somehow Nara doesn’t get as much attention from international tourists as it deserves, and not nearly as much as its neighbors. Getting to Nara takes just 45 minutes by train from Tokyo, making the visit doable as a day trip if you’re staying in the contemporary capital. It bridges the natural and the urban in a way that few Japanese destinations south of Hokkaido can, with shrines and temples lining the city of 360,000. Here are 11 of the best things to do in the city. 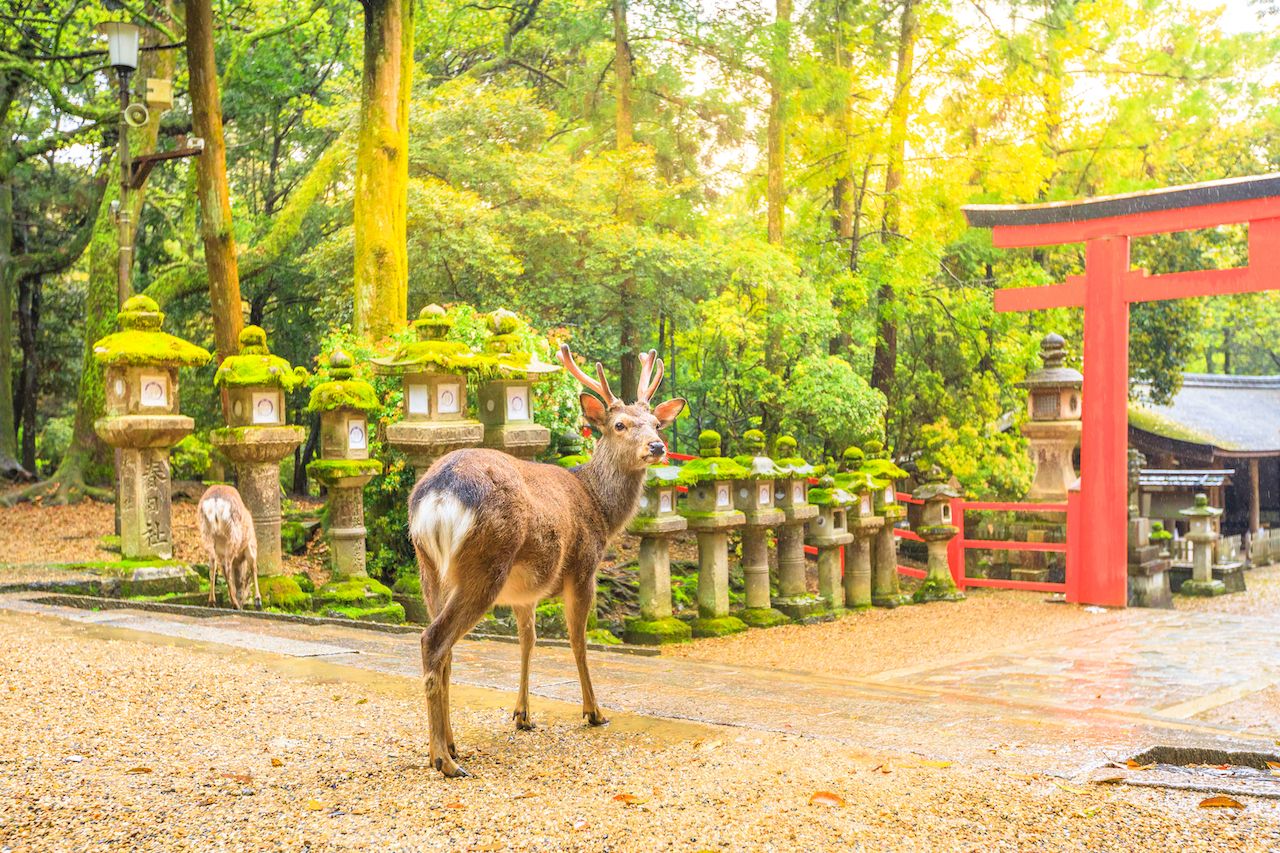 Nara has over 1,200 semi-tame, sacred deer living in the city, and these furry residents are what draw the majority of visitors. Local lore holds these deer as messengers of the gods. The story goes that Takemikazuchi, the God of Thunder, arrived on the back of a white deer and was enshrined in a local tomb, and the deer that now roam the park eating from the hands of guests possess the same courier powers as the steed that Takemizakuchi arrived on. The best place to encounter them is in Nara Park, where the deer roam freely around the grounds, bowing to tourists for food. If you want to make some new friends, buy some shika senbei (deer crackers) from one of the nearby stalls and watch them come running.

At over 1,000 years old, Todaiji is one of the most famous and significant temples in all of Japan. The entrance is marked by the colossal Nandaimon gate, which is guarded by two imposing deity statues. The temple’s gigantic main hall — one of the largest wooden structures in the world — is genuinely awe-inspiring, and inside you’ll find a serene, 15-meter tall bronze statue of Buddha. The temple is located inside Nara Park, making it easy to visit after you’ve handed out all of your deer crackers. 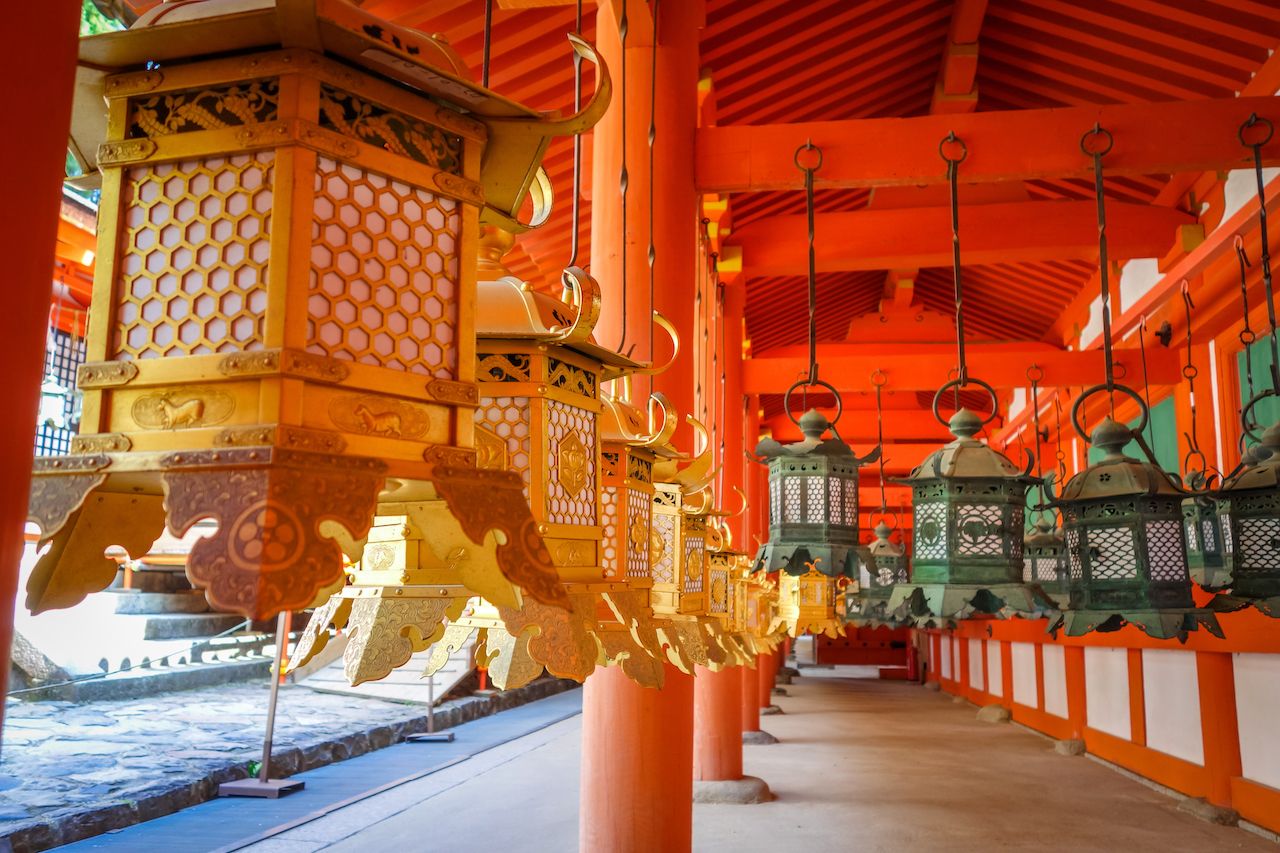 This stunning shrine lies hidden among the trees in Nara Park, the pathways leading to it lined with ancient, moss-covered stone lanterns. In contrast to their surroundings, the inner shrine buildings are a vivid red, with countless bronze lanterns hanging from the eaves. The most important Shinto shrine in the city, Kasuga Taisha is also one of its most beautiful locations.

For something a little more invigorating, head to the grassy slopes of Mount Wakakusa. The 342-meter (1,122-foot) summit is easy to reach as the paths are very well maintained, although the routes are steep in places, so you’ll still get a bit of a workout. The views out over the city from the top are fantastic, and in spring, it’s a great place to admire the cherry blossoms. 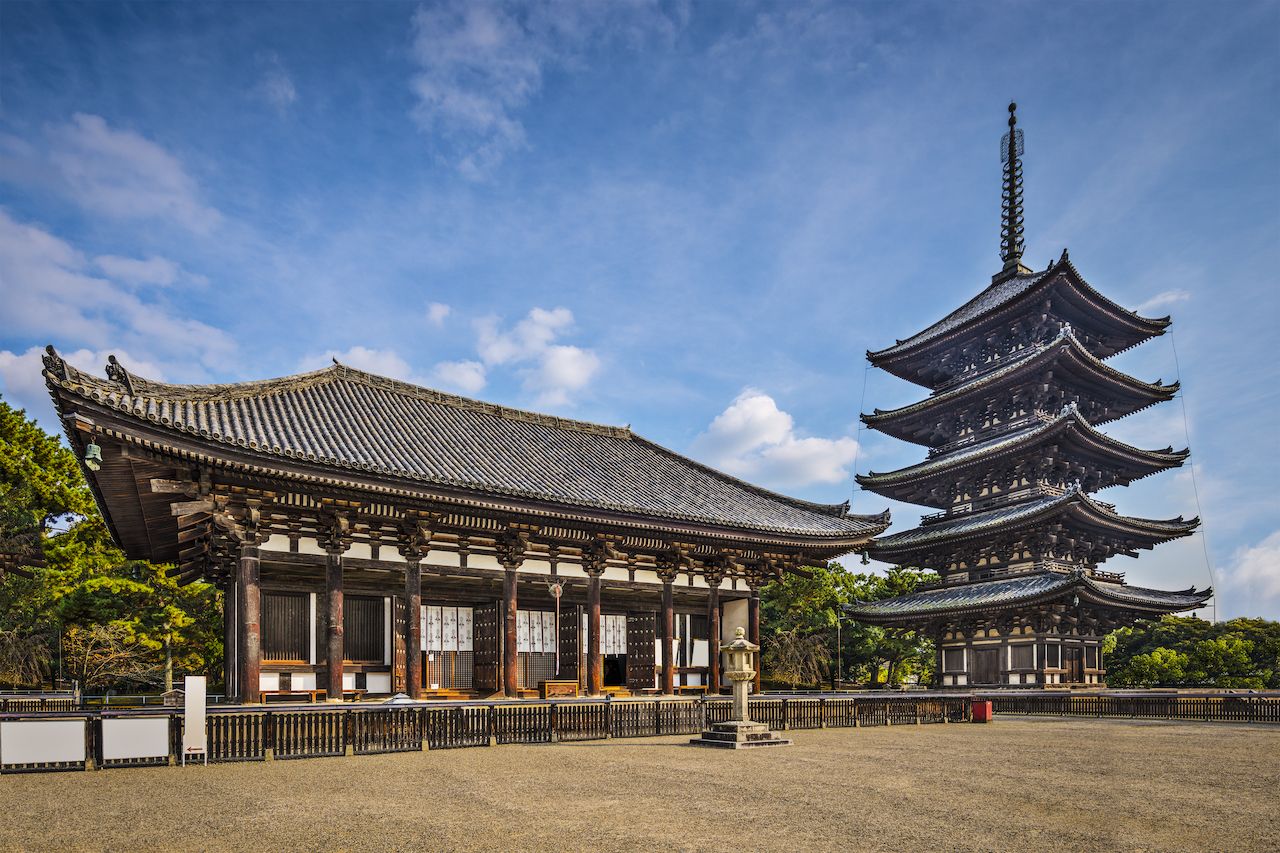 The last of Nara’s big-name attractions, Kofukuji temple is easily identified by the soaring pagoda at its heart. It’s the second-tallest five-story pagoda in Japan at just over 50 meters (around 170 feet) and has become a symbol of the city. If you like Buddhist art, don’t miss the impressive collection in the temple’s nondescript National Treasure Museum.

Somewhat unexpectedly, Nara is home to a renowned cocktail bar whose owner and bartender, Michito Kaneko, won a World Class bartending tournament in 2015. Hidden down a side street, Lamp Bar is a speakeasy-style establishment with a classy steampunk aesthetic. There’s no menu — instead, Kaneko will mix up an exquisitely presented classic or original cocktail to suit your particular tastes. 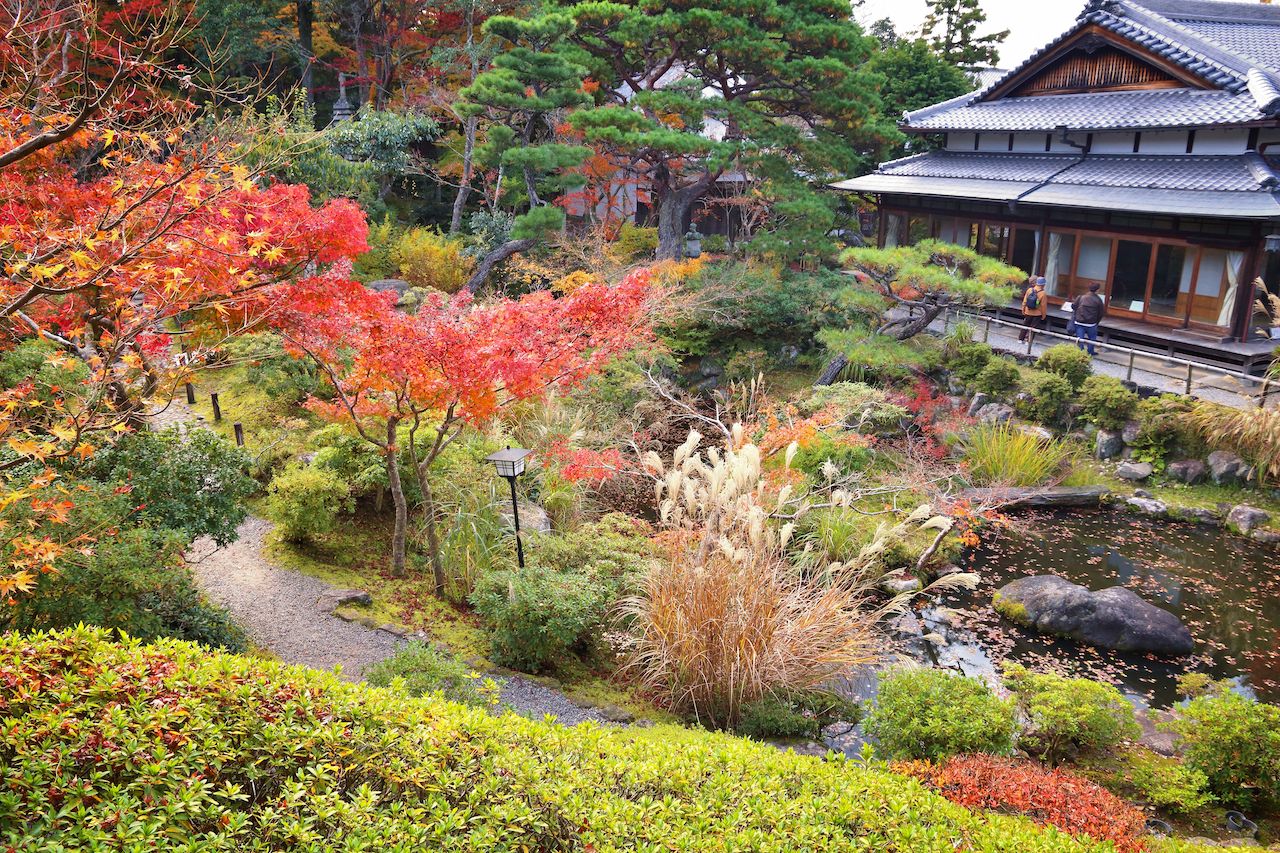 This pair of classic Japanese gardens is much quieter than Nara’s other attractions, despite being just moments from the city center. The exquisitely designed and immaculately maintained grounds are perfect for quiet contemplation, and each season brings something different to enjoy. You can also extend your stay by stopping for tea in one of Isuien’s traditional tea houses.

If you prefer a more traditional tipple, stop by the Harushika Sake Brewery. One of the best-known breweries in the city, it’s been making Japanese rice wine for about 150 years and now opens its doors to visitors who want to sample its wares. For under $5, you can try five different types of sake and can even keep your tasting glass as a souvenir. 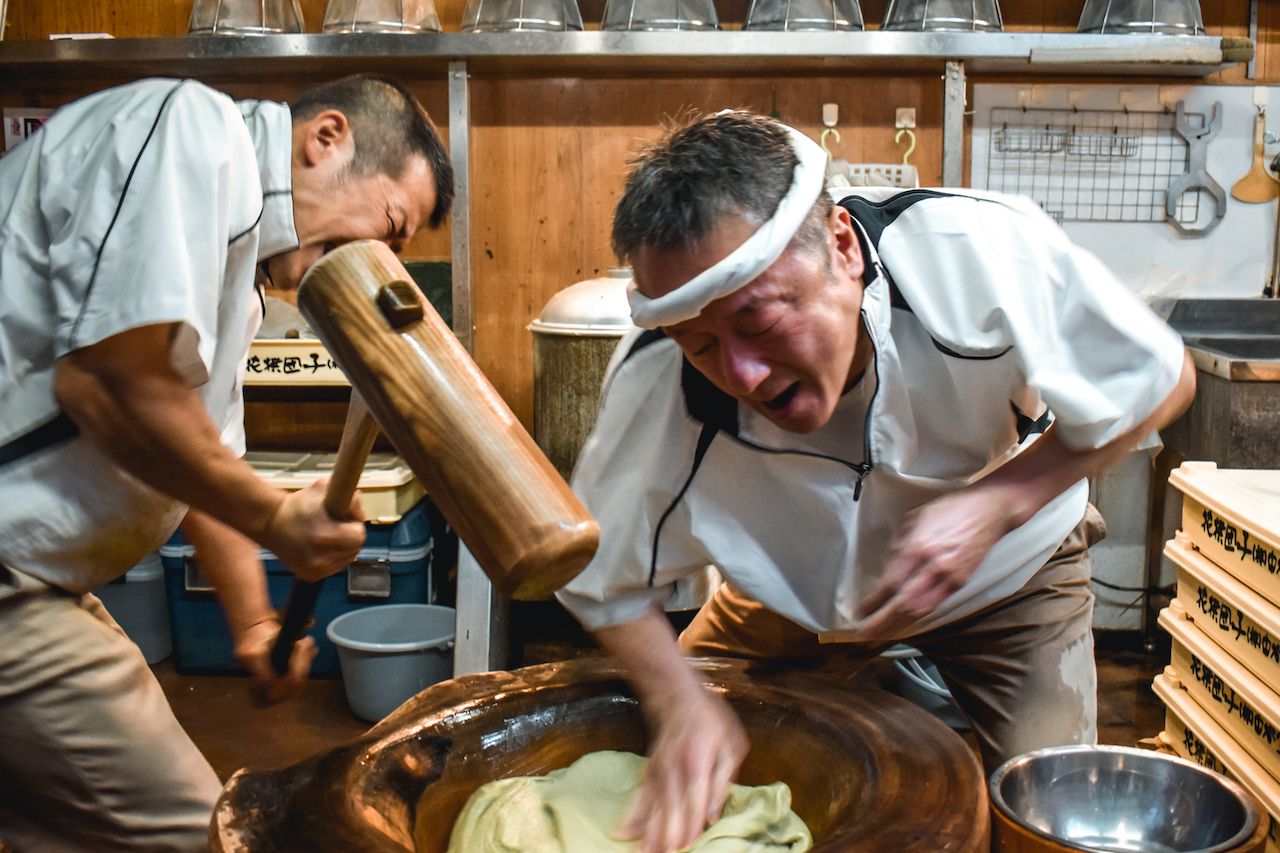 Mochi (sticky rice cakes) are a staple Japanese sweet, and in Nara you can watch them being freshly made in front of you. The Nakatanido mochi shop pulls in crowds with its street-side displays of high-energy, high-speed rice pounding. Flavored with yomogi (Japanese mugwort) and kinako (roasted soybean flour), the finished product is soft, warm, and deliciously chewy.

10. Lose yourself in the Nara of old in Naramachi.

Naramachi is the traditional merchant district of the city, a maze of narrow lanes and classical architecture. Many of the wooden townhouses have been transformed on the inside, now housing quaint cafes, boutique craft stores, art galleries, and inns. Wandering around here is like stepping back in time to ancient Japan, and a great way to get a feel for Nara’s history.

11. Shop for souvenirs in boutique arts and crafts stores. 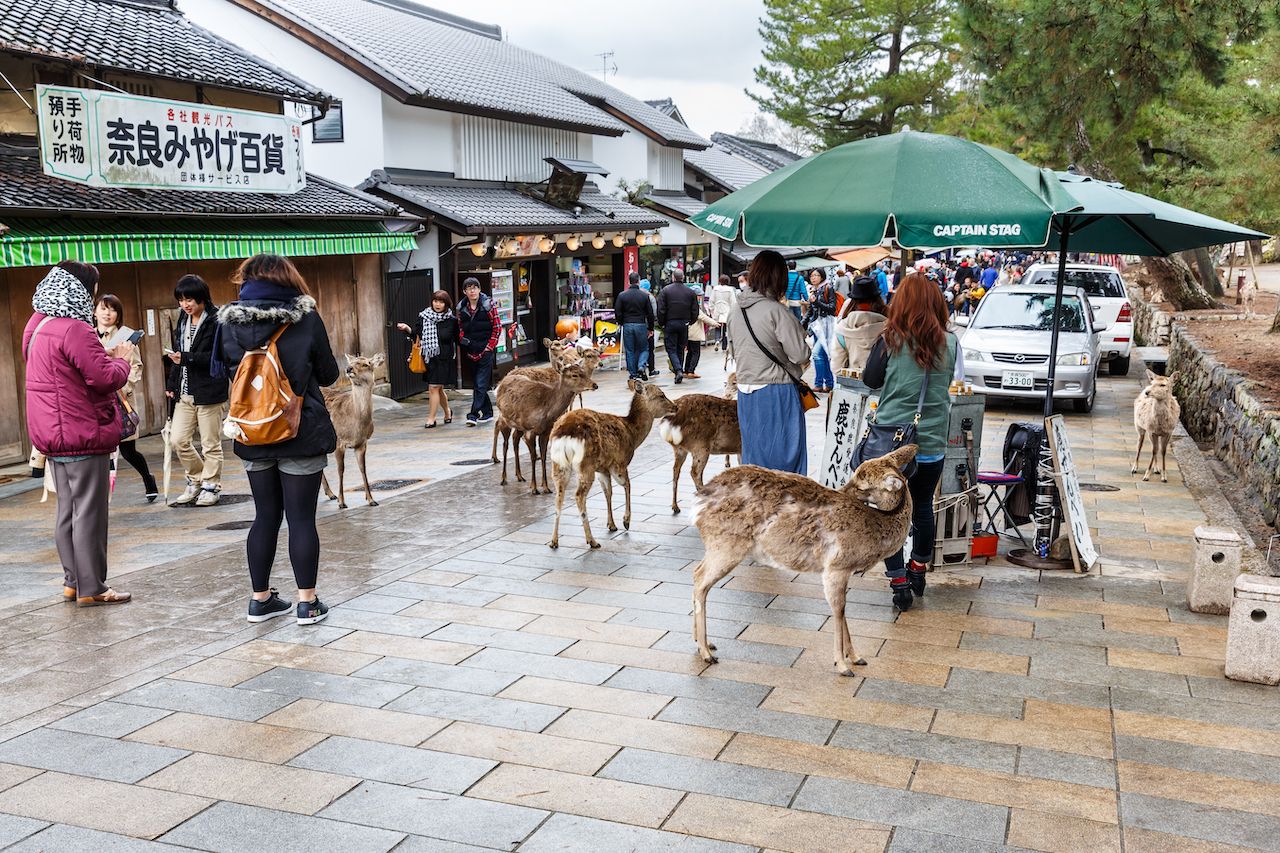 Hopefully, by the time you’ve done all of the above, you’ll have completely fallen in love with Nara and be looking for some mementos to take home. Browse the boutiques of Naramachi for hand-made arts and crafts like bags, folding fans, and pottery, or hit up the more modern shops near the train station for all manner of deer-related goods.