The signs at the beach bars and hostels along Playa Santana were a little misleading. Hotels and bars that didn’t look like they’d been touched in months were promising parties, happy hours, and imminent reopenings.

“Closed until summer,” said the black scrawl outside Taberna 99. It’s unclear which summer, exactly, the sign was referring to. Could be 2019. Could be 20-never.

“Back next season,” read the one hanging in back of Buena Onda Beach Resort. “Next” being a relative term.

“Beach party,” Waves & Dreams advertised, though the only “party” going on seemed to be between long-abandoned beach chairs. 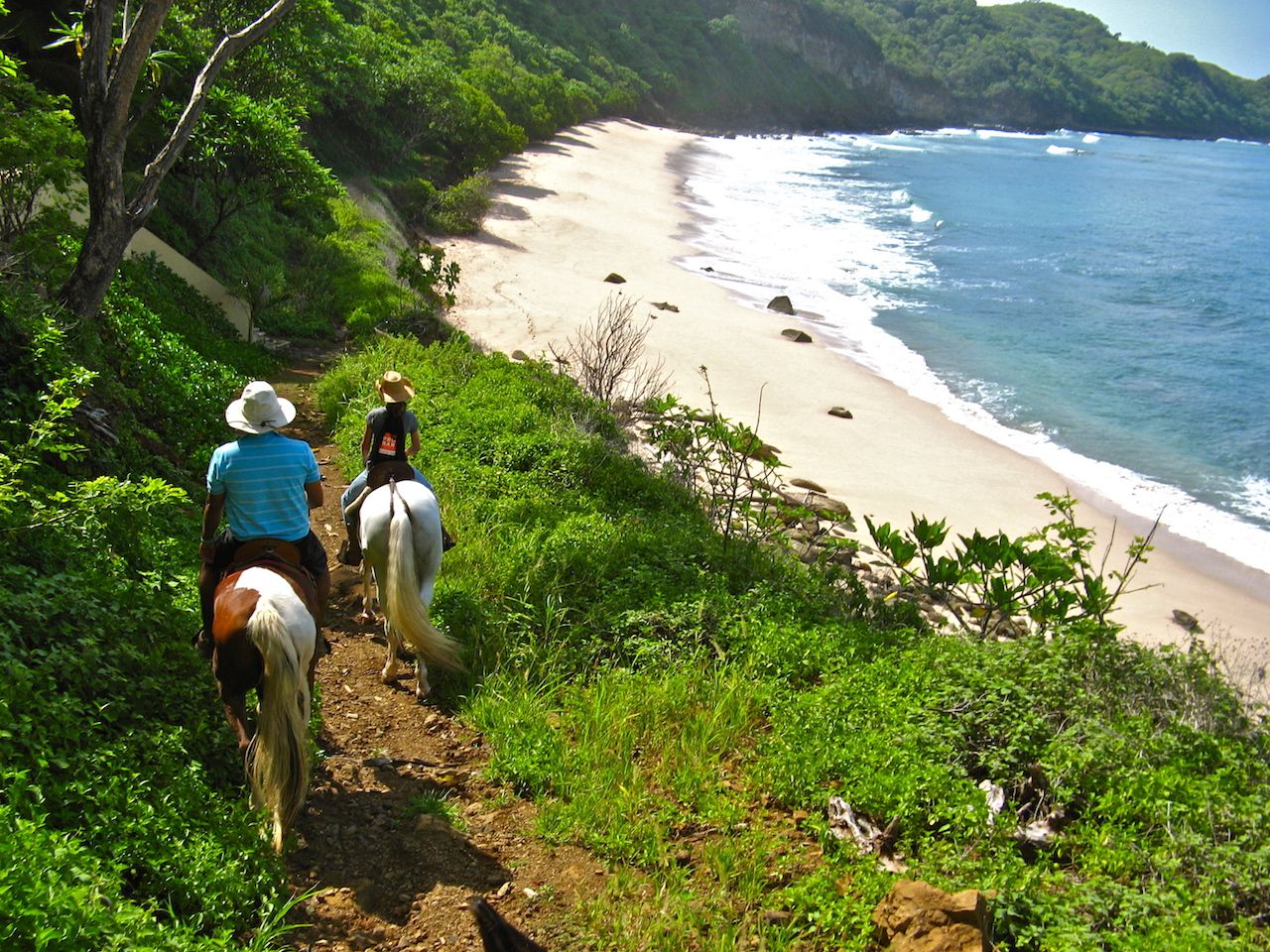 These relics I saw while riding a horse along Nicaragua’s Playa Santana this fall were a little sad — reminders of a vibrant, albeit short, golden era of Nicaraguan tourism that peaked during 2017 and early 2018. For a brief moment, places like these thrived, and Nicaragua was the tourism darling of the Western hemisphere.

It was easy to understand why people fell in love with the country as I rode this stunning beach in the Rivas Department. Cascading Pacific waves crashed into the golden shoreline as majestic tropical mountains reflected the last light of the evening. The region is best known for being home to surf breaks like Panga Drops and Colorados and to the sprawling Rancho Santana, a private residence and luxury resort with five spectacular secluded beaches. Though the resort has remained open, it’s literally the lone beacon of light along this mountainous shoreline at sunset.

“The original reaction was, ‘Oh, this will pass soon,’” Tanya Lexin tells me at the bar at Rancho Santana. She has worked there for eight years, heading up its spa and fitness programs. We are the only ones at the bar, outnumbered by the staff about four to one. “Then it lasted a little longer than people were comfortable with. Then small little hotels, as soon as we saw tourism halt, they couldn’t keep their doors open, running that risk of when it might return. Some of our neighbors, it looks like they’re not opening anytime soon.”

From the brink of a boom to rock bottom 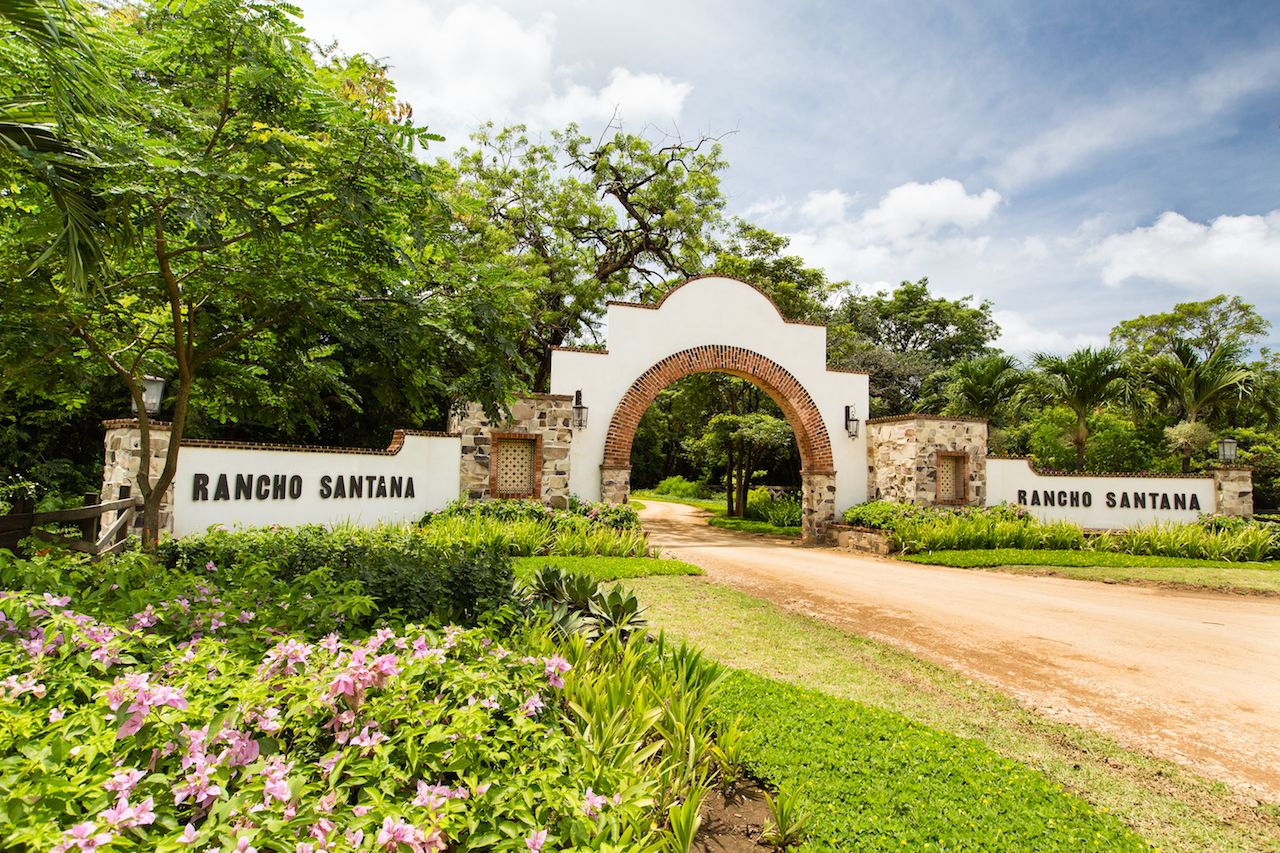 The cataclysmic crisis Lexin refers to is the civil unrest that befell Nicaragua in the spring. An unpopular proposal to roll back national pensions touched off massive protests in April, and the ensuing government crackdown splashed images of the military attacking protesters all over international news.

Countries around the world began branding Nicaragua with the dreaded Level 3 travel advisory — or the respective nation’s equivalent — advising citizens to seriously reconsider all nonessential travel.

This was bad news for a country that spent 20 years correcting its banana-republic image as an unstable, poor, and dangerous place. Just as it was finally on the brink of hitting the tourism scene bigtime, it plummeted back to square one.

“Last high season between November and April was spectacular,” says Hans Pfister, CEO of the Cayuga Collection, overseeing hotels in Nicaragua and Costa Rica. His company had to close one of its premiere resorts, the Jicaro Island Lodge, in the wake of the crisis. “There was talk of direct flights from New York and Madrid. It seemed like, OK finally, it only took 20 years, and finally, it’s happening. And then the crisis came, then we’re back to… it feels like we’re back 20 years ago.” 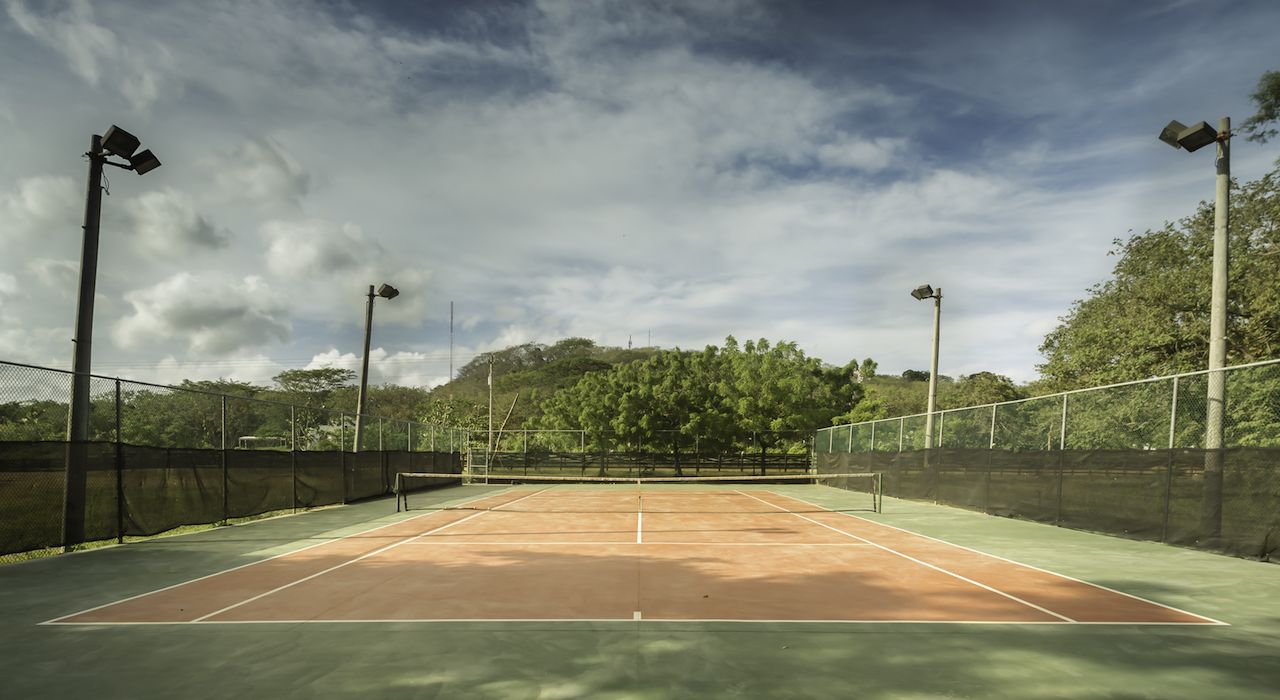 It wasn’t just luxury properties catering to big money out-of-towners who got hit hard. Hostels, the lodging of choice for advisories-be-damned surfers and backpackers, didn’t fare much better.

“We were running maybe 80 to 90 percent occupancy on average for the year,” says Muffadal Saylawala, the founder of the Casa Oro Group who owns the biggest hotel in the popular surf town of San Juan del Sur. “There were times where we just didn’t have enough beds. I was turning people away. This year, all through April and into October, we’d get excited if we had five people in the hostel.”

This was especially damaging to a country that was finally enjoying the economic spoils of tourism.

“This came out of nowhere,” Rancho Santana’s Lexin told me. “Everyone was like, oh, I just took out a loan to build my house or bought a new motorcycle or a car. People close to me went from having all parties in the family working to having one person supporting everyone.”

Though Rancho Santana stayed open during the crisis, laying off almost no employees, it was the exception. Many large resorts closed, most famously the Mukul Auberge Resort whose guests all fled during the crisis.

A country fights to show the world it’s safe. 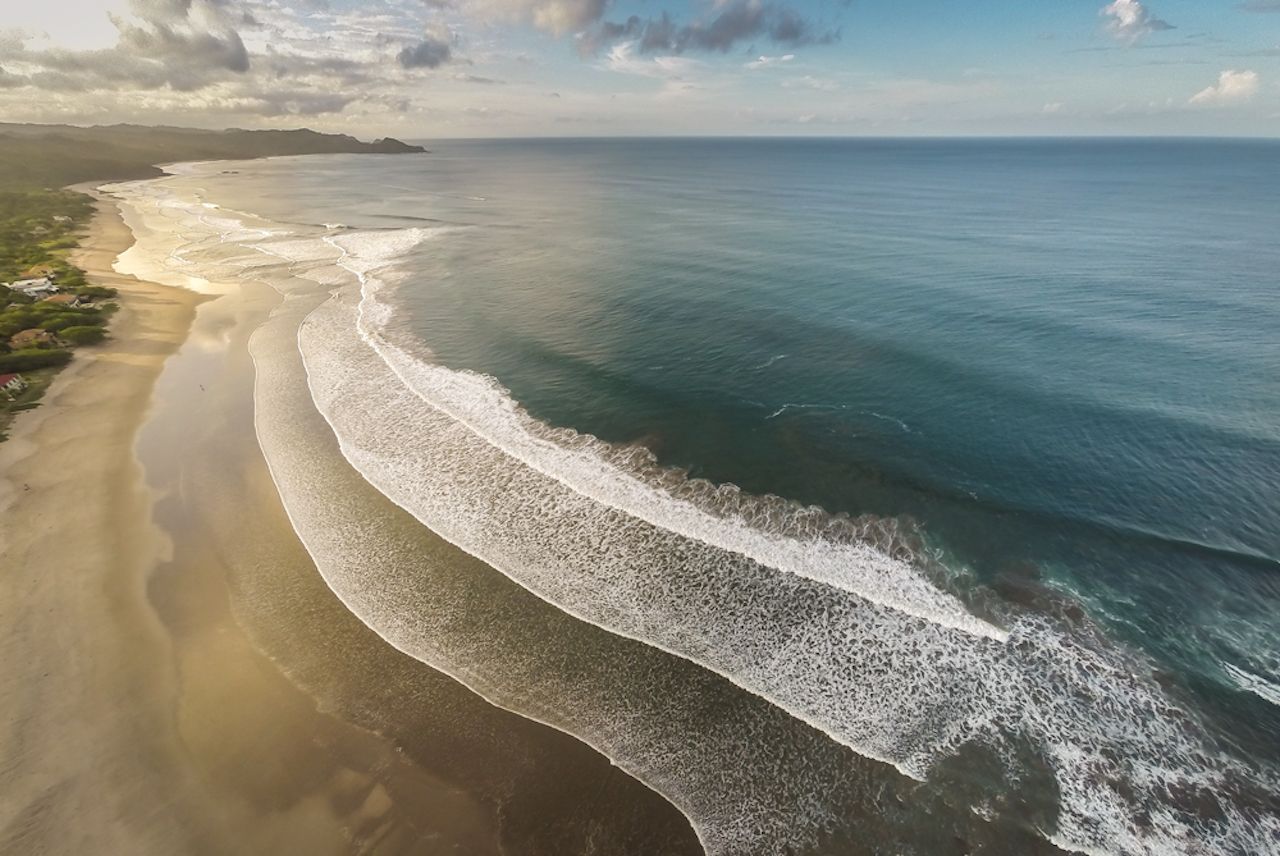 Today, the unrest is for the most part over. But with foreign governments maintaining the elevated threat level warnings for Nicaragua, getting people to come back has been a tough sell.

“People have this image that there are tanks in the streets, it looks like a civil war,” says Pfister. “But what we have now is a country perfectly safe for tourism. There are no roadblocks, there’s nothing different than what it was before if you’re a tourist.”

This became explicitly obvious to me within five minutes of leaving the Managua airport. All the sensational news stories friends had sent me were gone from memory by the time I arrived at the Masaya Volcano. The national park seemed peaceful and open, the only smoke coming from inside the caldera. Outside the park, the streets were calm. People looked their usual Nicaraguan brand of happy.

“Nicaraguans, we’re a glass half full kind of people,” Rancho Santana’s Director of Guest Experience Alberto Marin told me. “We’re all about moving forward in a democratic way. For us, it’s all about working and having a smile on our face.”

Hiking to the top of the cliffs near Playa Escondida, watching the waves break below and gazing out at the stunning green mountains, it seemed incomprehensible that anyone could deem the place even remotely dangerous.

“It’s frustrating for me to open the [US] embassy site and see ‘Level 3, reconsider travel,’” said Lexin. “I’m like ‘Why are you doing that?’ It’s been so stable for so long now, and continuing to scare people off like that isn’t helping anyone.”

Pfister spoke with me shortly after he’d met with five European ambassadors to Nicaragua, urging them to drop their threat levels from three to two. Germany and Austria had recently lowered theirs, and the meeting was held in hopes others would follow suit.

The bold few blazing the trail back 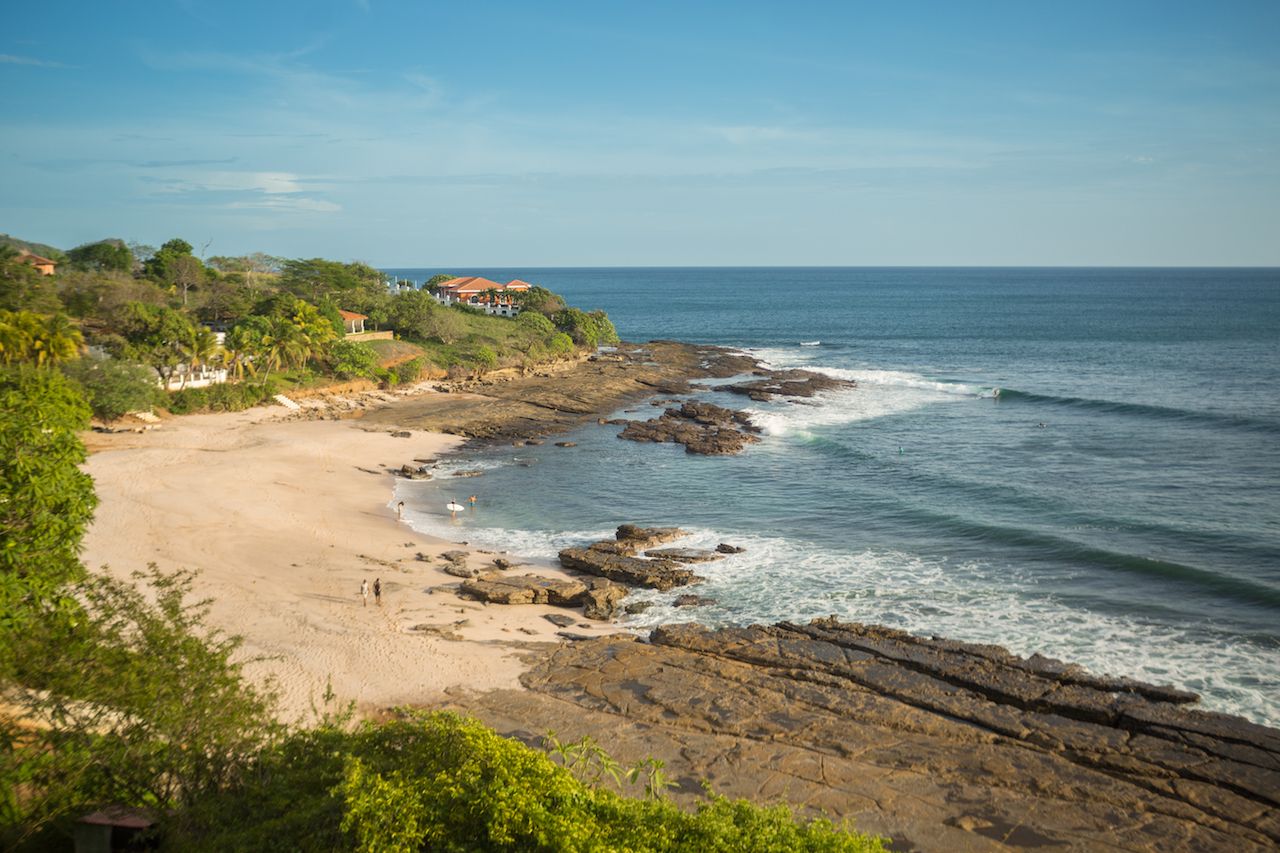 Pfister’s message seems to be getting through, if only to those who dig deep enough to find it.

“We had a couple from Virginia, and they went on the internet and the first thing they saw was the travel warning,” he said, discussing the first guests to return to Jicaro Island when it reopened in October. “But they said let’s look beyond that and researched what’s happening on the ground, and they were able to look through that and came anyway.”

Saylawala told me of an 80-year-old man from St. Louis he encountered at a bar in San Juan del Sur who asked why it was so slow compared to the year before. Completely unaware of the summer’s unrest, the man seemed almost angry it had kept anyone from coming.

“Politics?” He asked with a combination of confusion and disdain. “Well, that’s stupid. I don’t care about politics; politics are stupid too.”

Unsettled, a tour company that offers what it describes as “study abroad for grown-ups, without the classes,” is running its first tour of Nicaragua since the unrest this February in Playa Santana.

“We talked to our friends who run hostels and hotels, and they say it’s picking back up,” Unsettled founder Jonathan Kalan told me. “We haven’t seen as high of volume as our first trip, but people are excited to go anyway.”

The places that looked so sadly empty on my fall horseback ride are open again too. Crowds aren’t what they were, but people are trickling back in.

But trickling is the keyword. And as long as travel advisories and overblown media coverage persist, it will be a tough road back for Nicaragua, and the people who depend on tourism.

“It took us 20 years to get where we were, and it feels like we just got slingshot back,” Lexin says as the golden light covers Rancho Santana’s dining room. “I think it’s gonna take us another year to get back to where we were. Some say 10 years; some think somewhere in between.”

She takes another sip of her Sauvignon Blanc and looks out at the silver-blue water.

Food + Drink10 Traditional Nicaraguan Foods the World Should Know About
Tagged
Beaches and Islands Travel Insider Guides Nicaragua
What did you think of this story?
Meh
Good
Awesome