How far would you be willing to travel to find a place where giants exist? They’re ancient, they’re alive, and they’re very, very tall.

What if that same place was filled with wildlife, gentle paths through natural features, and such dense forest that when you look up, sometimes all you see are canopies of leaves?

Of course, it’s Sequoia National Park, and it’s all those things and more. It’s a wonderful place to be with kids, and to feel like a kid again. Thanks to easy access and short walking paths, exploring Sequoia National Park with kids is far easier than trekking through larger parks like Glacier or Denali.

Sequoia is one of nine national parks in California and abuts Kings Canyon National Park; the two are often referred to as one place. Sequoia is a 5-hour drive from San Francisco and a little less from Los Angeles, making it a very road-trippable destination for a weekend trip. Traveling to Sequoia National Park with kids involves only a car ride from most cities on the West Coast, saving the hassle and headache of flying or taking a park shuttle with cranky kids in tow.

How to get to Sequoia National Park

Reaching the park is fairly easy. If you’re coming from the south, take Highway 198 through Three Rivers and into the park. It’s a gorgeous road but also narrow and windy, so plan ahead if your kids are prone to car sickness.

If you’re coming from San Francisco, you’ll go through Fresno and take the same road. Alternatively, for a more direct and less windy route, head east out of Fresno to enter Kings Canyon National Park, just above Sequoia National Park. Note that the road connecting the two parks occasionally closes during heavy snow or may require chains and/or snow tires.

When to visit Sequoia National Park with kids

In the southern Sierra Nevada Mountains, Sequoia gets snow, but not as much as places like Lake Tahoe or Yosemite. That means you can enjoy the vibrant scenery any season — but you’ll have a different experience based on when you visit. Summer brings the most daylight hours but also the biggest crowds, so summer and fall are probably the best times to visit for an ideal blend of mild weather, less-crowded trails, and cheaper accommodation.

If your kiddos already have their own down jackets, visit in winter — there’s something very special about visiting the park when it’s covered in snow. The park becomes a playground for kids, and photographers will love the contrast of white snow and massive green trees. Of course, visiting Sequoia National Park with kids any time outside of the summer means pulling them out of school for a few days if you’re trying to go mid-week, but you can always squeeze in some science and ecology lessons with the park’s junior ranger program.

Bring on the magic: Things to see and do with kids in Sequoia National Park 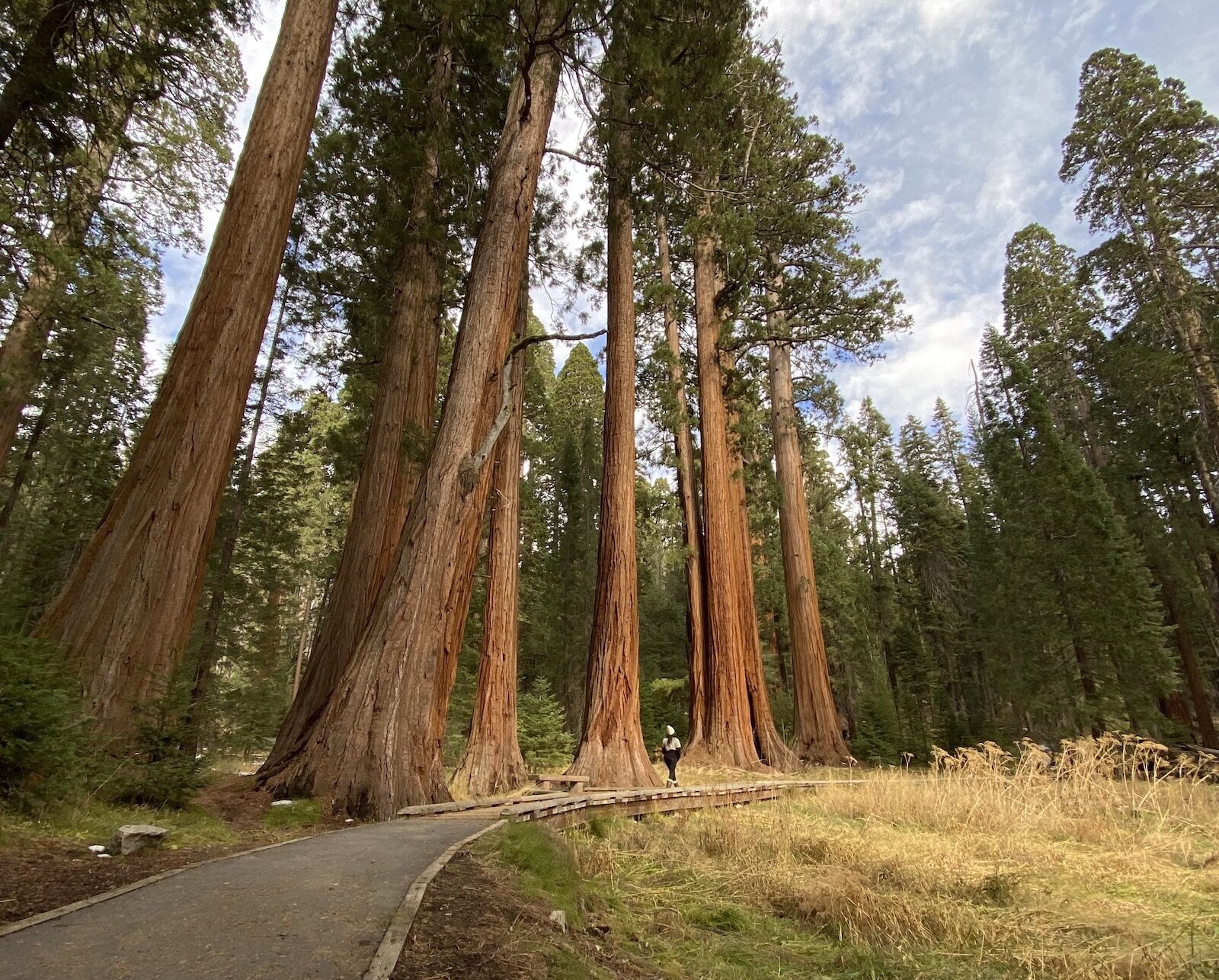 If you choose to enter by Kings Canyon National Park, a must-stop sight to kickstart your family adventure is the General Grant Tree Trail. This .8-mile, stroller-friendly trail will bring you up close to giant sequoias, including a fallen sequoia your kids can climb in. This is also where you’ll find the General Grant Tree, the third-largest tree in the world.

The General Grant trail is a great stop to make on your first day, even if you’re coming from the south. And on your drive back to Sequoia along Generals Highway, you’ll have outstanding views of the park. There are giant trees on both sides of the road for most of the drive. You’ll find a couple of pullouts on the side of the road, ideal for taking unique family pictures surrounded by trees up to 3,000 years old.

Start your second day in Sequoia National Park with kids by getting an early start for the most-visited area in the park: the General Sherman Trail. It’s a 1.2-mile loop trail that takes hikers to the General Sherman Tree. It’s a massive Sequoia at 275 feet tall, and the largest living tree in the world. It’s humbling to feel so tiny next to the massive tree, and even if your kids don’t appreciate the meaningfulness of seeing it, they’ll still love how massive it is. The trail is stroller-friendly and accessible all year. It gains about 200 feet and there’s sometimes a shuttle available during busy times. 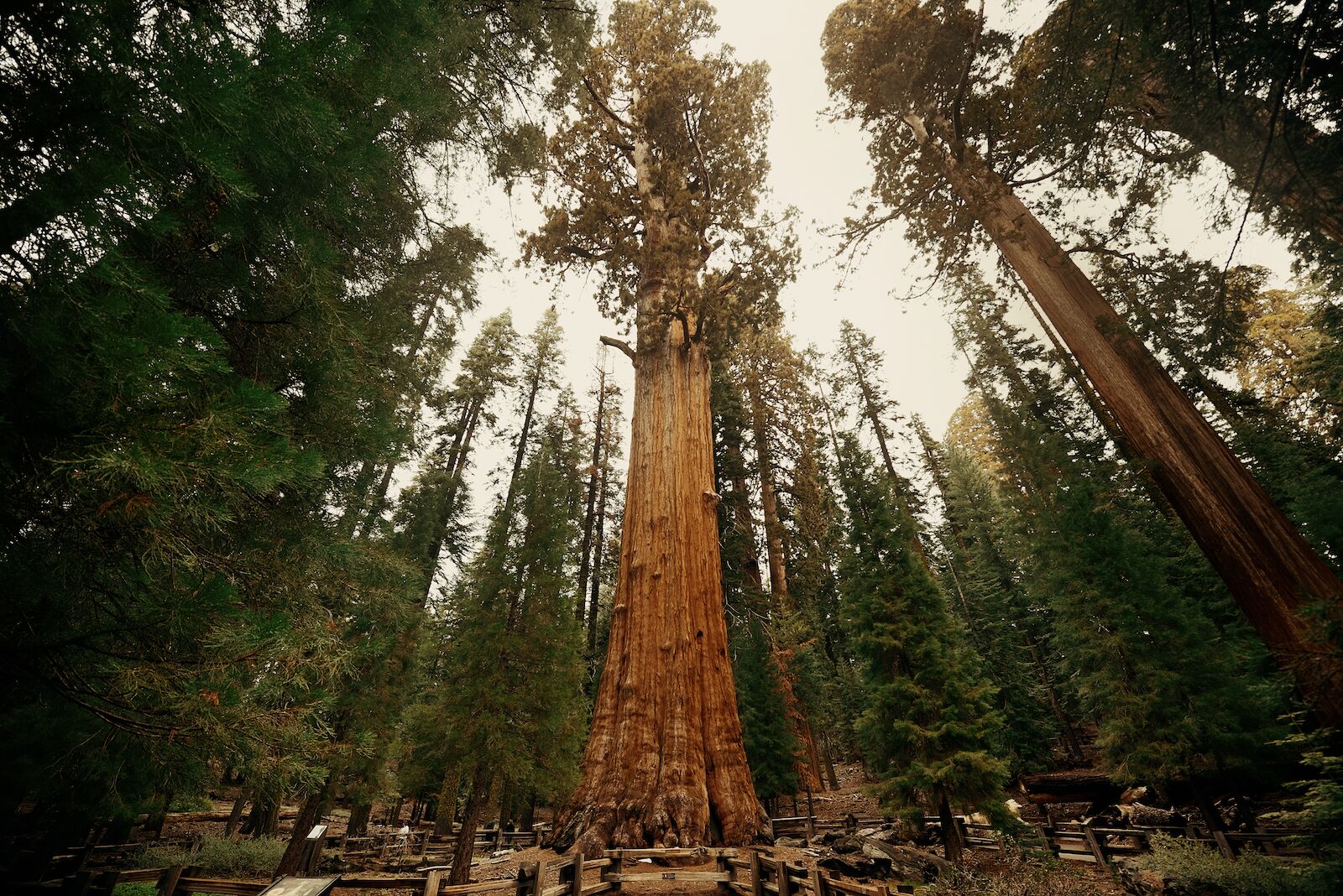 Unfortunately, this area was hugely impacted by the KNP Complex Fire in the fall of 2021, requiring extensive clearing and cleanup and destroying many ancient trees. Given the connection between climate change and larger, more frequent fires, you’ll want to check ahead on what areas are open before making your plans.

From the General Sherman Trail, drive south to the Big Trees trailhead. It’s a .8-mile loop and one of the most popular stops in Sequoia National Park with kids. Maybe it’s the name that evokes the promise of the giant flora you’ll find beyond the trailhead, maybe it’s because you get to breathe in the scents and sights of the forest, but the trail is magical — as is the opportunity to see so many sequoias at once. You’ll feel like you’re in the heart of the park.

Be sure to give your kids time to explore, walk, run, and touch their surroundings. They’re bound to feel amazed by the size of the trees and they — and you — will want to absorb and observe every moment of it. Hide and seek is a downright must-do with kids. 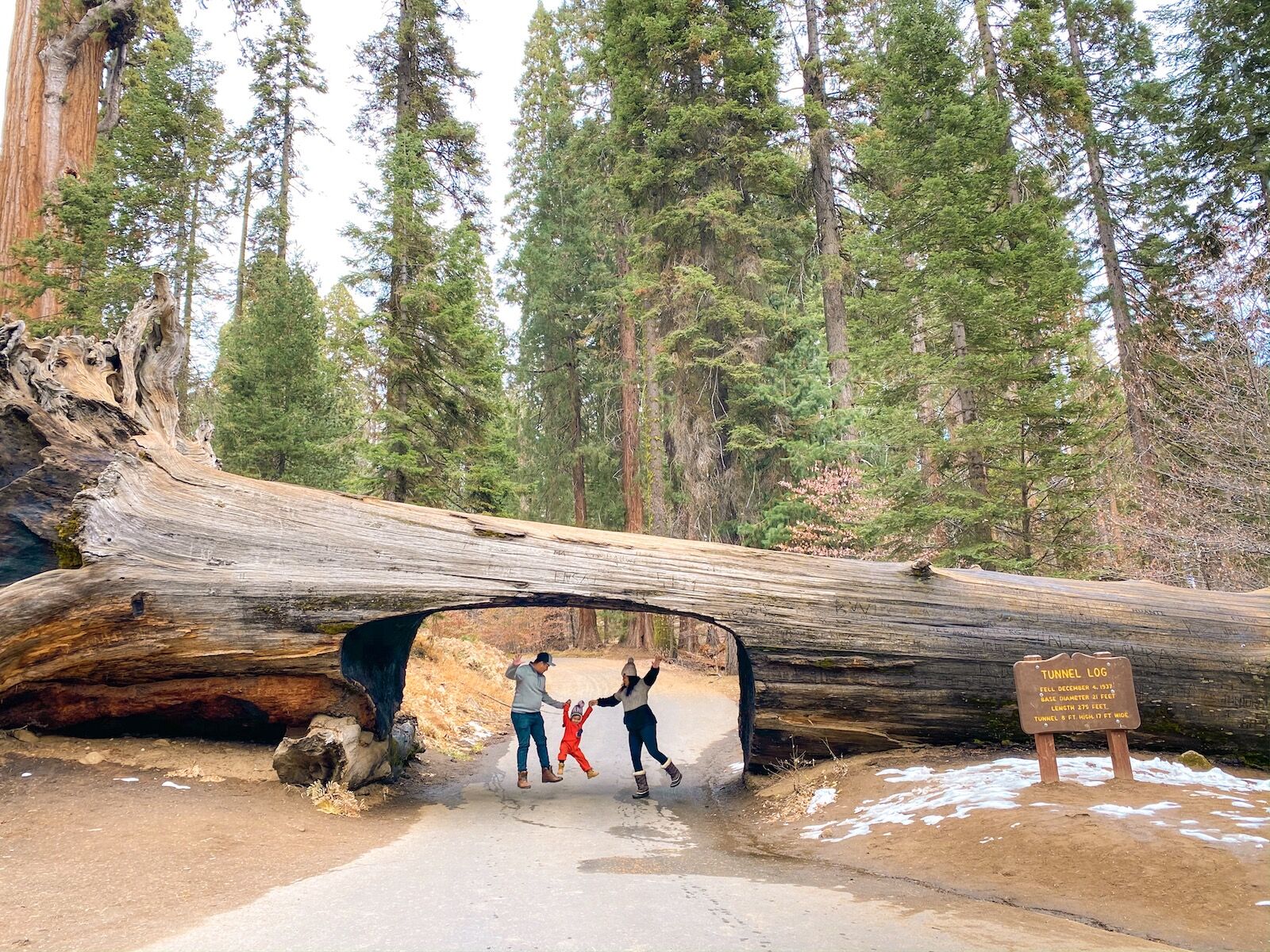 To wrap up your second day, drive to the Tunnel Log, just a short distance from the Big Trees Trail. This is where you’ll find the often-photographed fallen giant sequoia cars are able to drive through. You don’t need to walk at all to reach it, but if you’d like to take photos, you’ll have to pull your car out of the way. Keep in mind that the Tunnel Log is completely covered in snow during winter and unreachable by car. It reopens every year at some point in the spring, depending on snowfall totals.

Where to stay in Sequoia National Park with kids

The only lodge available inside the park is Wuksachi Lodge. It’s convenient for families as it’s only a short drive to the trails and also has an on-site restaurant, which is one of the few spots in the park to find food. You’ll probably want to make reservations in advance on weekends or in the summer. Another perk of the hotel is its amazing night sky. Since the hotel area is very dark at night, you’ll be able to witness one of the most vibrant night skies you’ve ever seen on a clear night. It’s not an official Dark Sky Park, but it does host astronomy events and festivals throughout the year.

Outside the park, the closest hotels to the entrance are those on Sierra Drive, around the town of Three Rivers. You could also stay at one of a few lodges and tented camps in Kings Canyon National Park or book an Airbnb or cabin just outside the park. 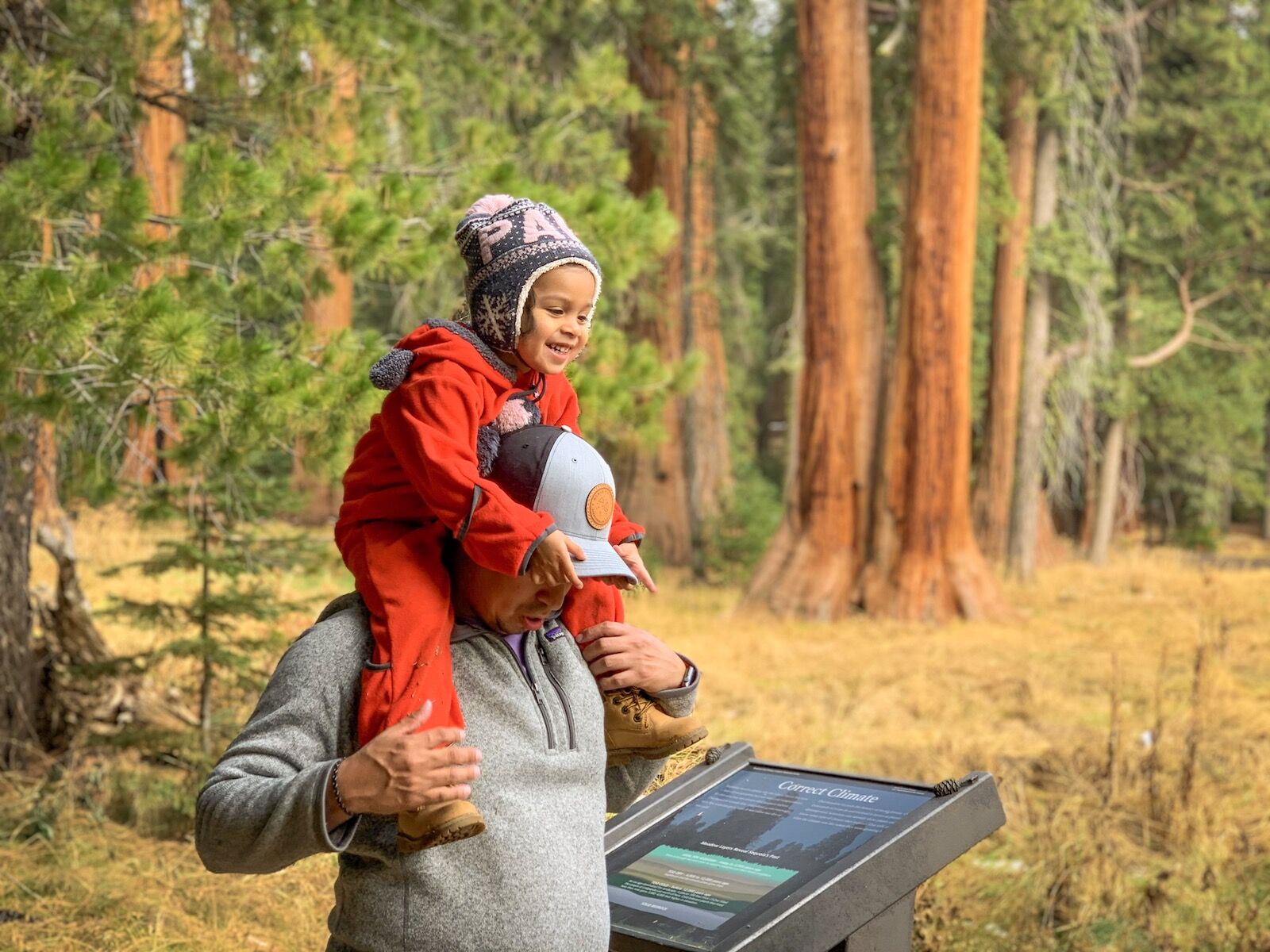 If you’re traveling with a baby or toddler in spring, summer, or fall, you’ll be fine with a stroller on many of the trails; the easy ones have very little elevation gain. However, for winter, a baby carrier will be the only way to carry kids across snowier trails, especially in the Big Trees area.

While hiking, you might as well take your time. None of the green (easy) trails are very long and with so many things to see, you should be able to visit them easily no matter the age of your children or how slowly they move. You could take advantage of the parks’ ranger program, download a cell phone app to help your kid identify plants by taking photos, or bring notebooks so your kids can draw pictures of what they see along the way. Make an adventure out of the trails and you’ll be amazed at how much fun your kids have just by walking.

Snacks and water are limited in the park, so buy everything you’ll need before you enter the park. And be prepared for a weak or non-existent phone signal inside Sequoia and Kings Canyon national parks. The only places where you’ll likely have service (or be able to use Wi-Fi) are the park visitor centers and Wuksachi Lodge. Be sure to ask for a park map when driving through the entrance gate, and download a Google map for offline use to make sure you don’t get lost while exploring.

Spirits + CocktailsThis Rainforest-Protecting Brazilian Distillery Is a Model for Sustainability
Tagged
Outdoor National Parks
What did you think of this story?
Meh
Good
Awesome