Flying with a pet is extremely stressful for both animal and owner alike, and requires you to constantly be aware of the many airport rules regarding your four-legged friends, as well as having great travel gear for pets. Thankfully, many airports around the US are aware of this issue, and are doing what they can to alleviate your stress. Travel rewards website Upgraded Points compiled a list of the best airports for dogs, ranking facilities on amenities like expansive areas for pets to relieve themselves and get in a game of fetch, as well as on-site boarding or daycare facilities. Whether it’s a designated lounge area where you can relax with your pet before your flight, or a full-fledged on-site dog park, these are the most pet-friendly airports in the US. 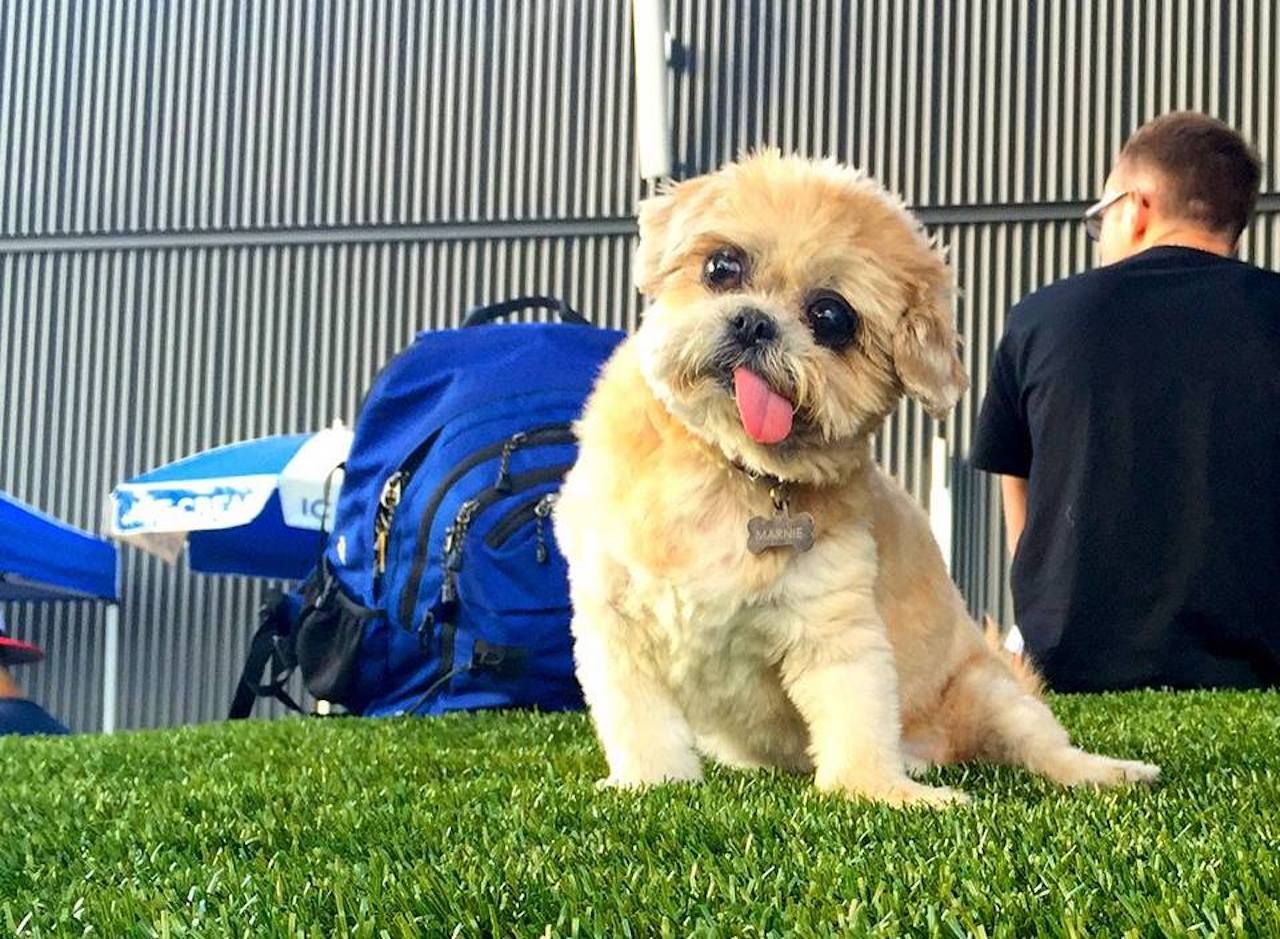 Ranked the best airport for pets in the US, JFK’s terminals certainly make things easy for pet owners. Every terminal in the airport comes equipped with relief areas (some outdoors, others indoors). Most impressive of all, Terminal 5 has a 4,000-square-foot outdoor patio called “the Wooftop,” where you can relax with your pet post-security before boarding. It’s open daily from 6:00 AM to 11:00 PM. Note that the ARK at JFK, located off the runway in Cargo Area D, provides 24/7 pre- and post-travel animal care and veterinary services for pets, horses, birds, livestock, and exotic animals. 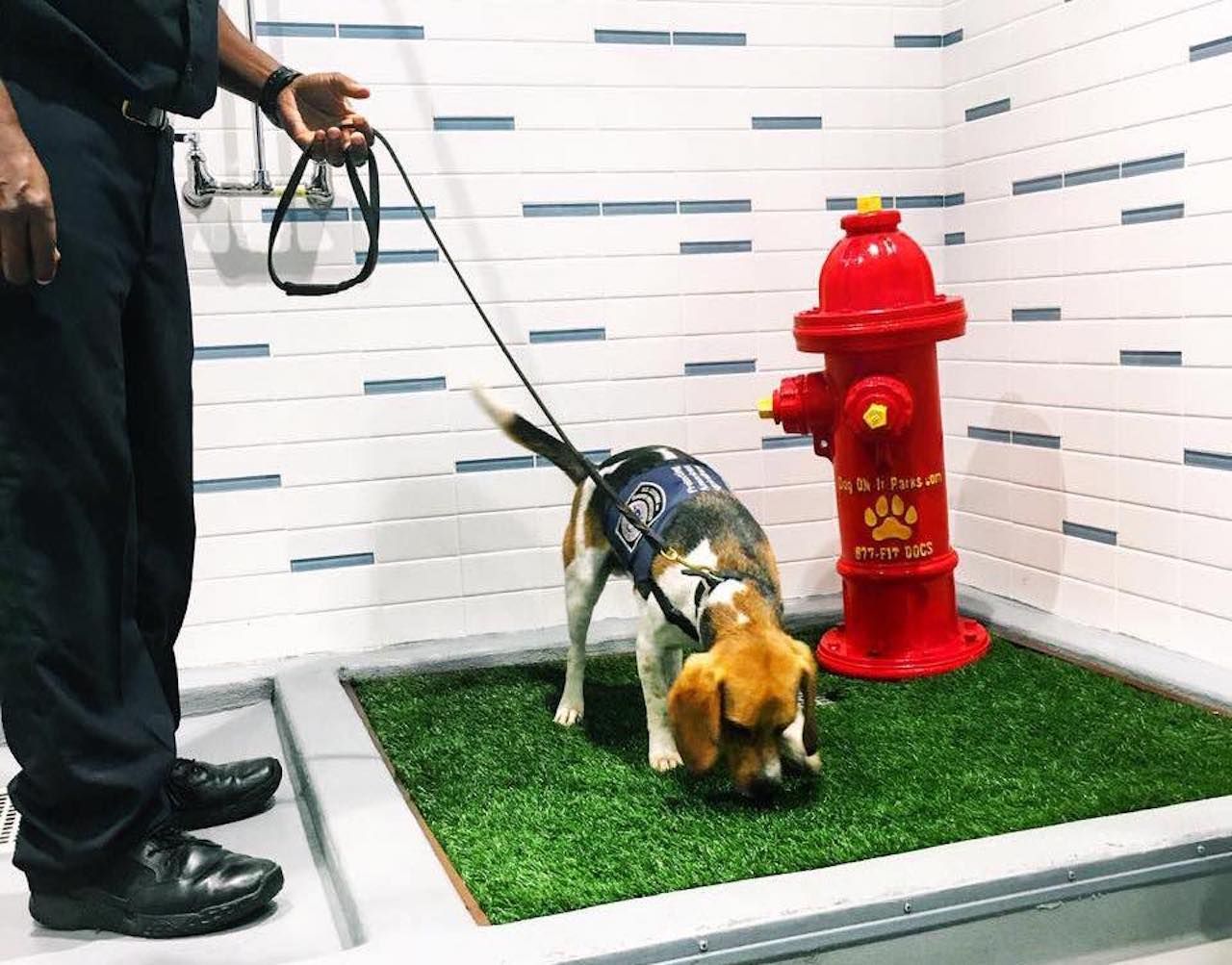 This airport’s high ranking is owed to its 1,000-square-foot dog park located before security, where your dog can run around in a fenced-in area. Once you’re through security, there are also relief areas in every concourse (near Gates T7, A10, B33, C19, E14, and F7, as well as D-Midpoint), so you won’t run into any bathroom emergencies just prior to boarding. And if you need to leave your pooch behind while you travel, Pet Paradise offers a 24/7 pickup and drop-off service by appointment, where your pet will be well cared-for throughout the entirety of your trip. 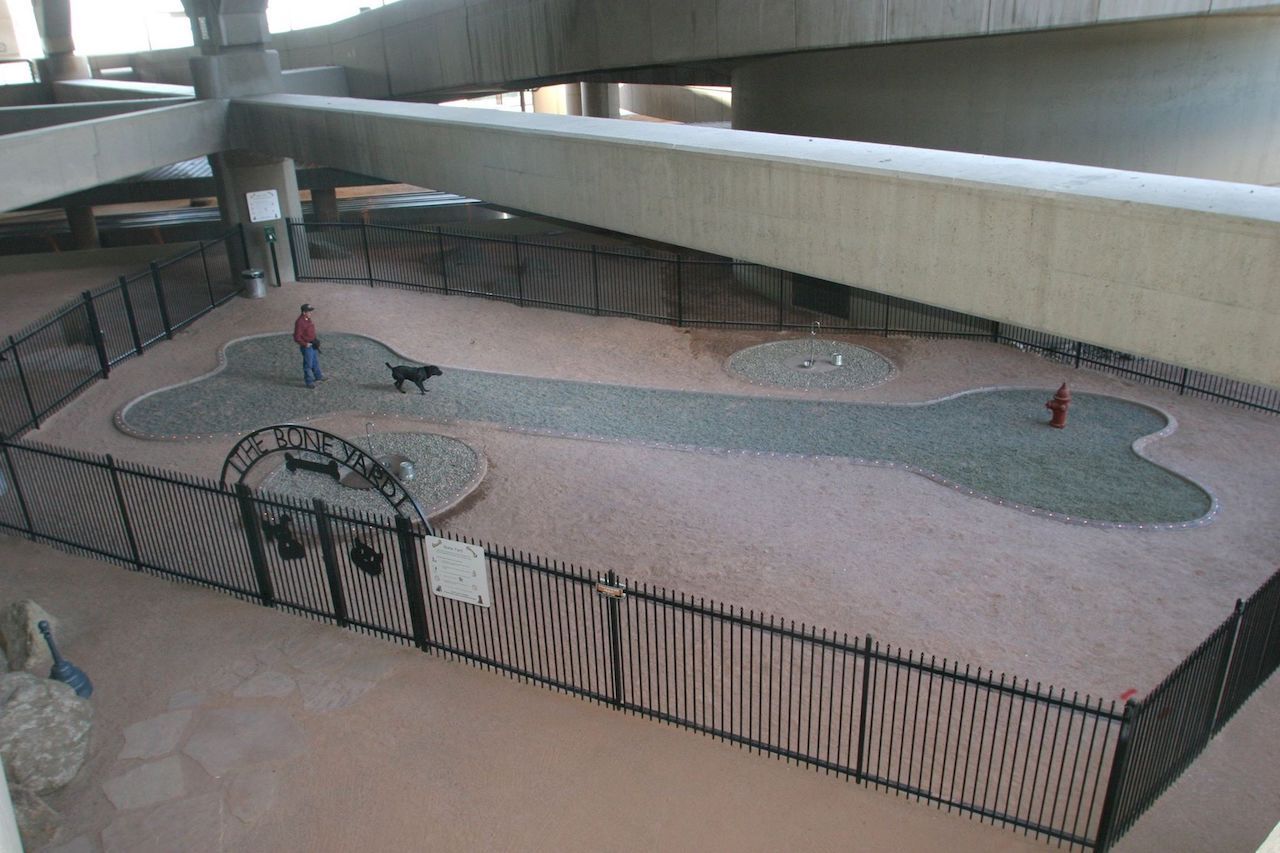 This Phoenix airport has a lot of space for your pets to run free and escape the stressful, restrictive airport environment. Rather than just a single dog park, Sky Harbor International Airport has nine separate areas for pets to run around, have a drink, and do their business, three of which are located post-security. The Paw Pad in Terminal 3 — Level 1 provides an outdoor area featuring native Arizona plants and a pet relief area, and the Bone Yard in Terminal 4 — Level 1 has a bone-shaped green space. 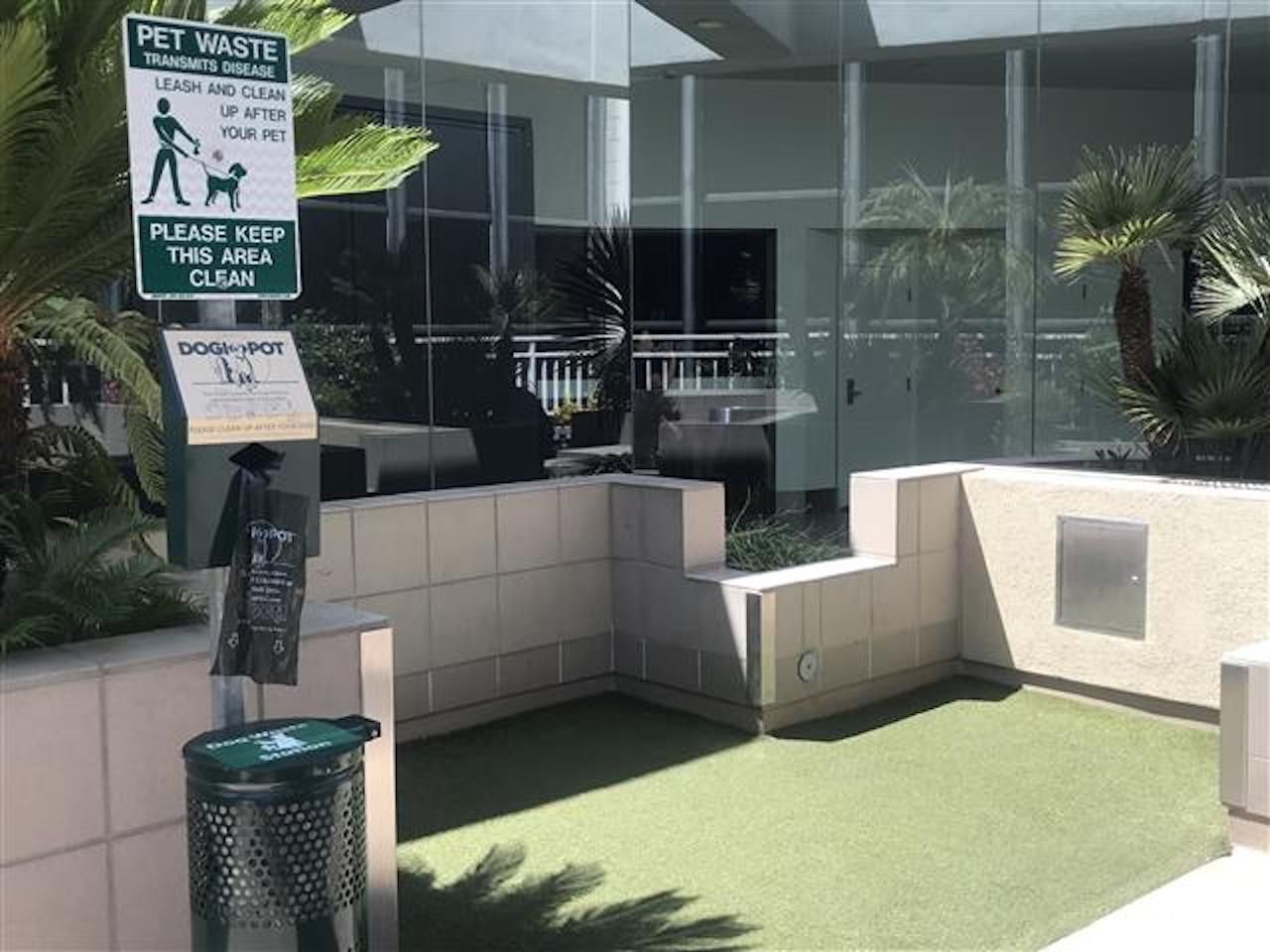 LAX might be famous for being super busy and for how frustrating it is to get an Uber, but maybe it should be known for having more pet relief areas than any other airport in the US. There are three animal relief areas before security and eight more post-security. Note that two of these are areas that are both indoors and outdoors so your pooch can take a breath of fresh air. The total of 11 pet relief stations makes a stressful trip through LAX a little more manageable for pet owners. 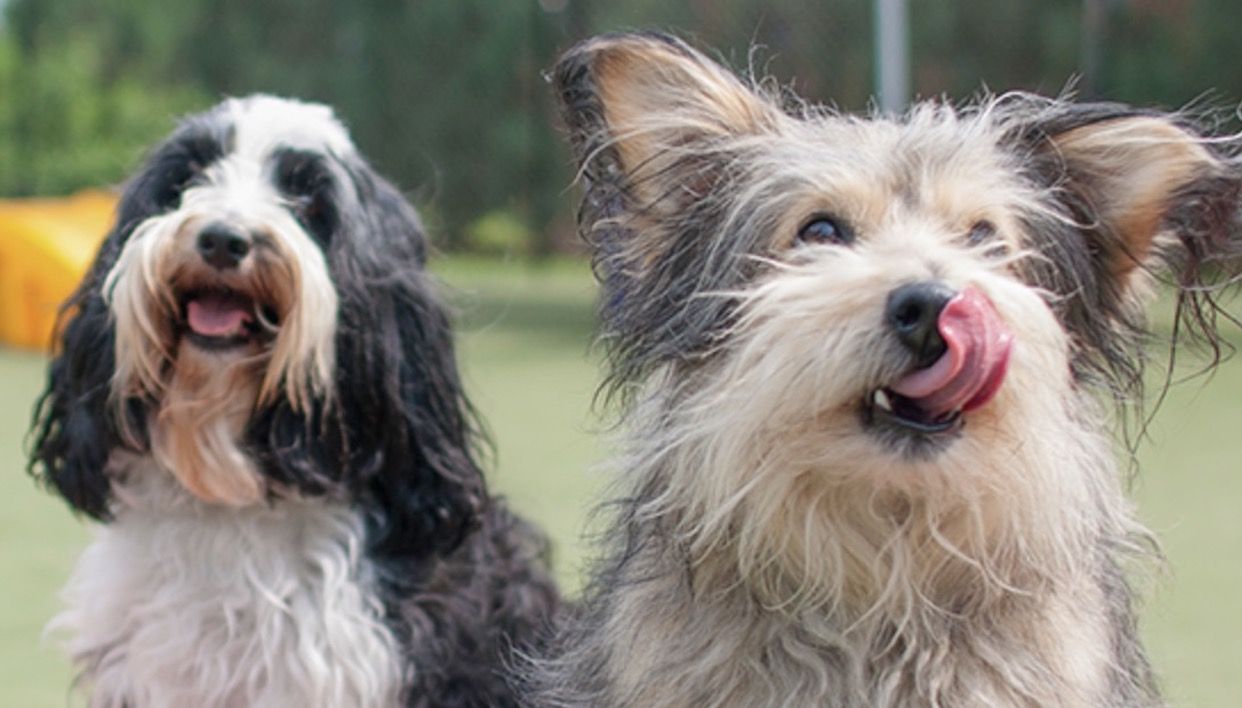 Minneapolis-Saint Paul International Airport maintains a high standard for pet service and convenience, with indoor and outdoor animal relief areas in Terminal 1 and 2. The indoor designated spaces feature realistic elements like fire hydrants, faux grass, and woodchips. The outdoor area in Terminal 2 is grassy. In addition, Now Boarding, an affiliate of the Animal Humane Society located on airport property, allows you to drop off your pet for boarding, day care, spa treatments, and training. After you’ve left your four-legged friend, you can even leave your car at the facility, and take a complimentary shuttle to your terminal to catch your flight. When you return, you’ll get picked up from the terminal and returned to your pet and vehicle. 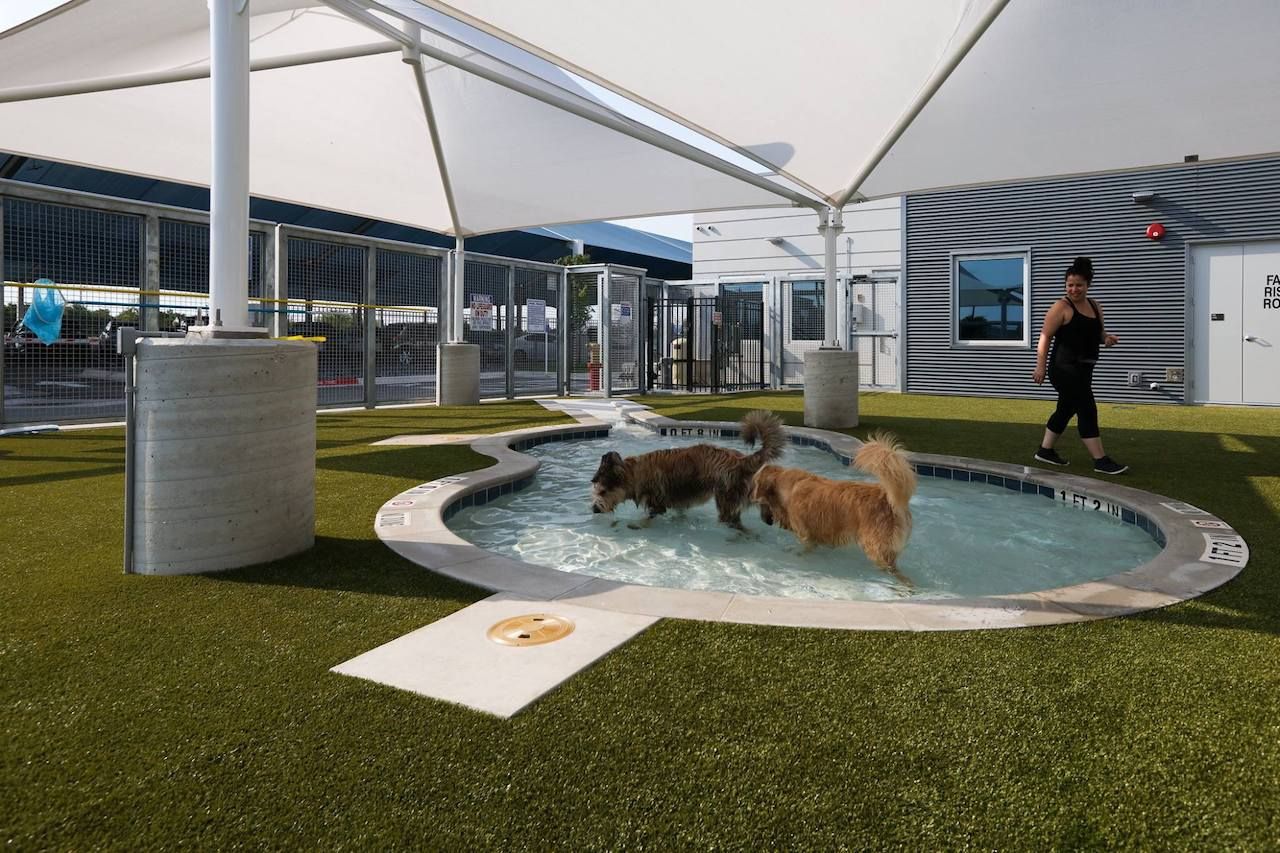 What really sets Austin’s airport apart from the rest is its famed “Dog Walk” area pre-security, which features a dog drinking fountain, dog waste pick-up bags, and trash bins. The airport also offers the Bark & Zoom service — a 24-hour pet pickup and drop-off facility that takes care of your pet while you’re on vacation. 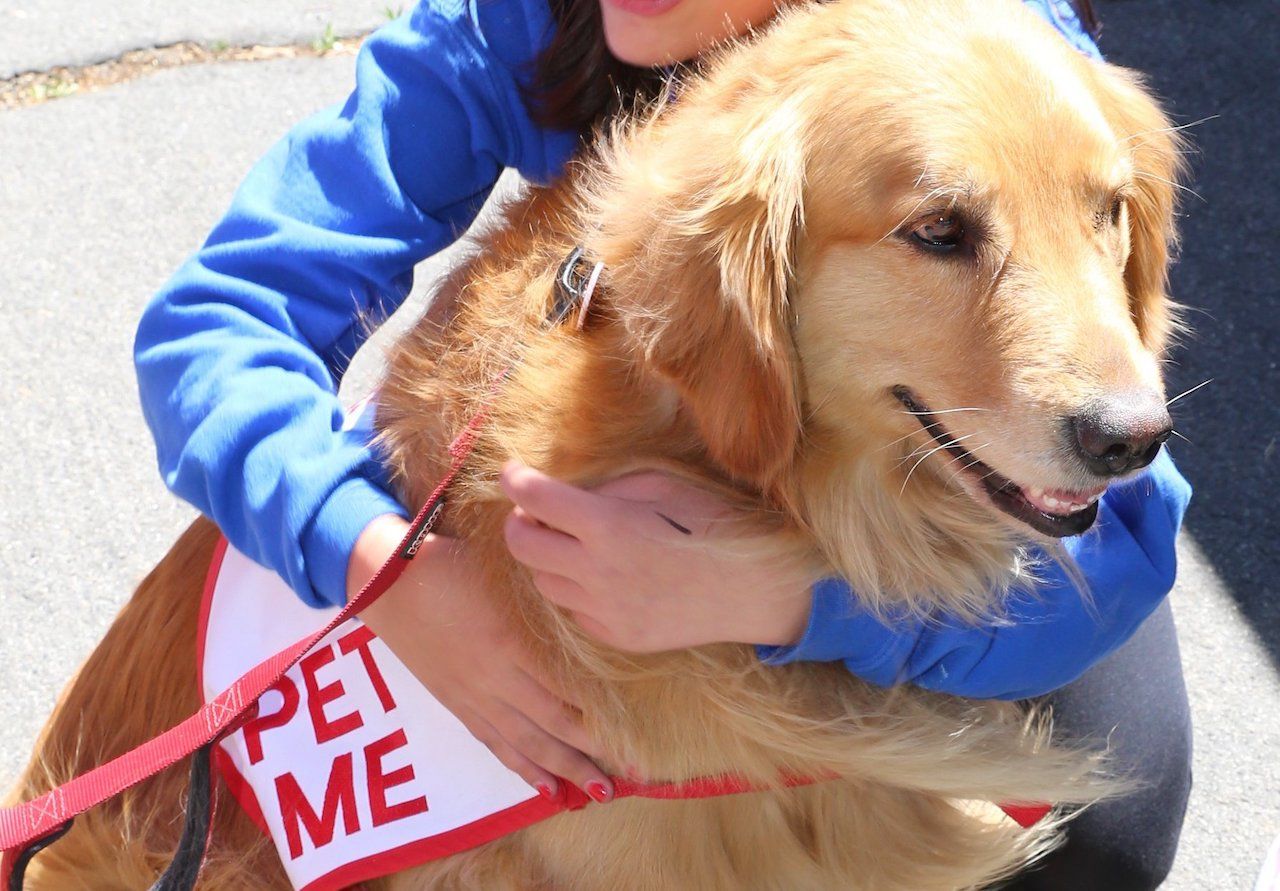 The award for best on-site dog park goes to Reno-Tahoe International Airport, which has three large parks complete with space to run and play, and a covered area for when the weather isn’t favorable. The parks are equipped with a fire hydrant, running water, and mutt mitts to clean up after the dogs. There are two Bark Parks pre-security and a relief area post-security. The airport also has a Paws 4 Passengers program with therapy dog teams throughout the terminal to help passengers relax before their flight. 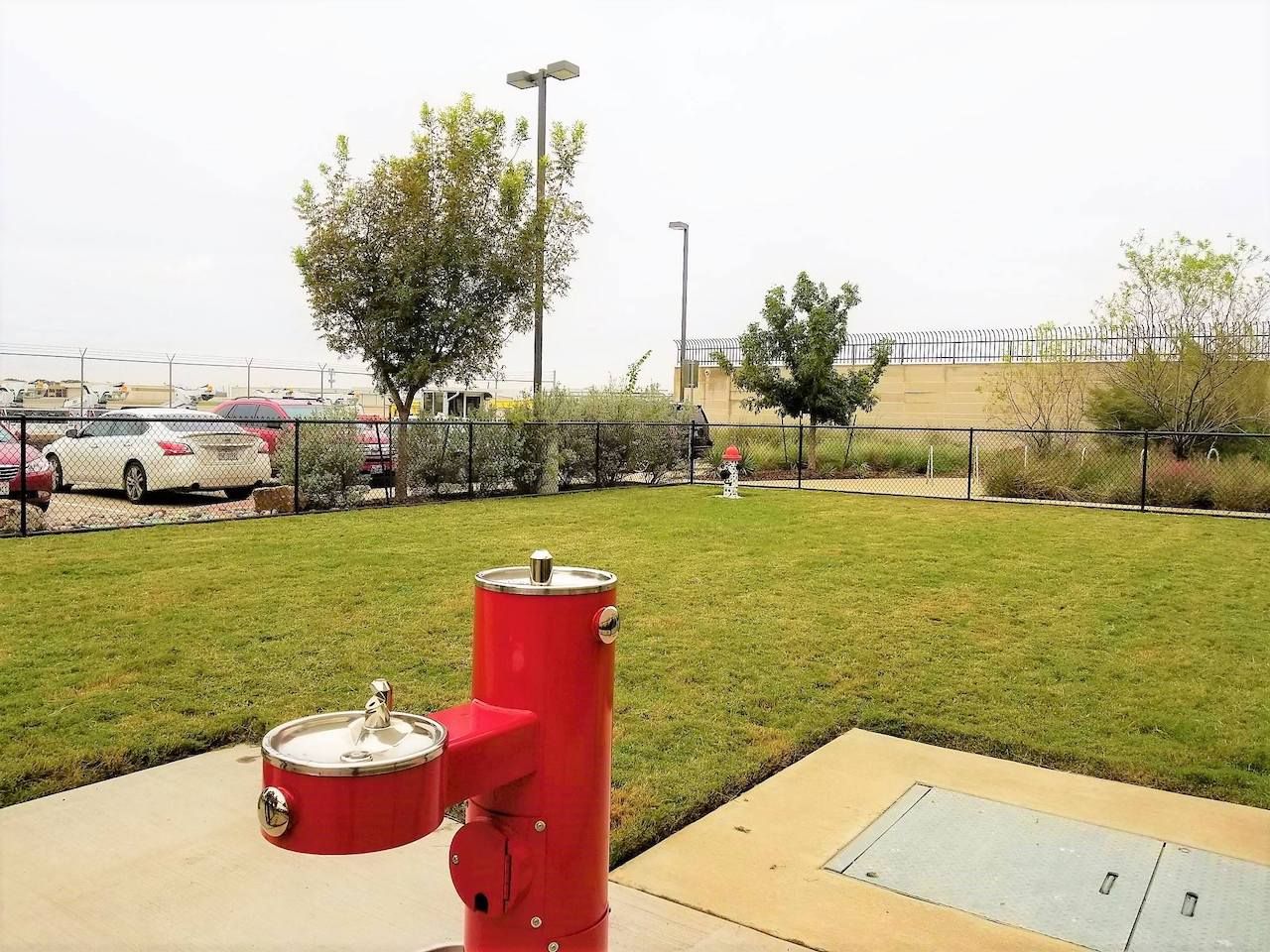 There are three pet relief areas at Dallas Love Field Airport; two outdoors and one indoors. Located at the end of the baggage claim area on the upper level, the Pet Park is the biggest of the three and has enough space for dogs to run and even get in a game of fetch before a flight. 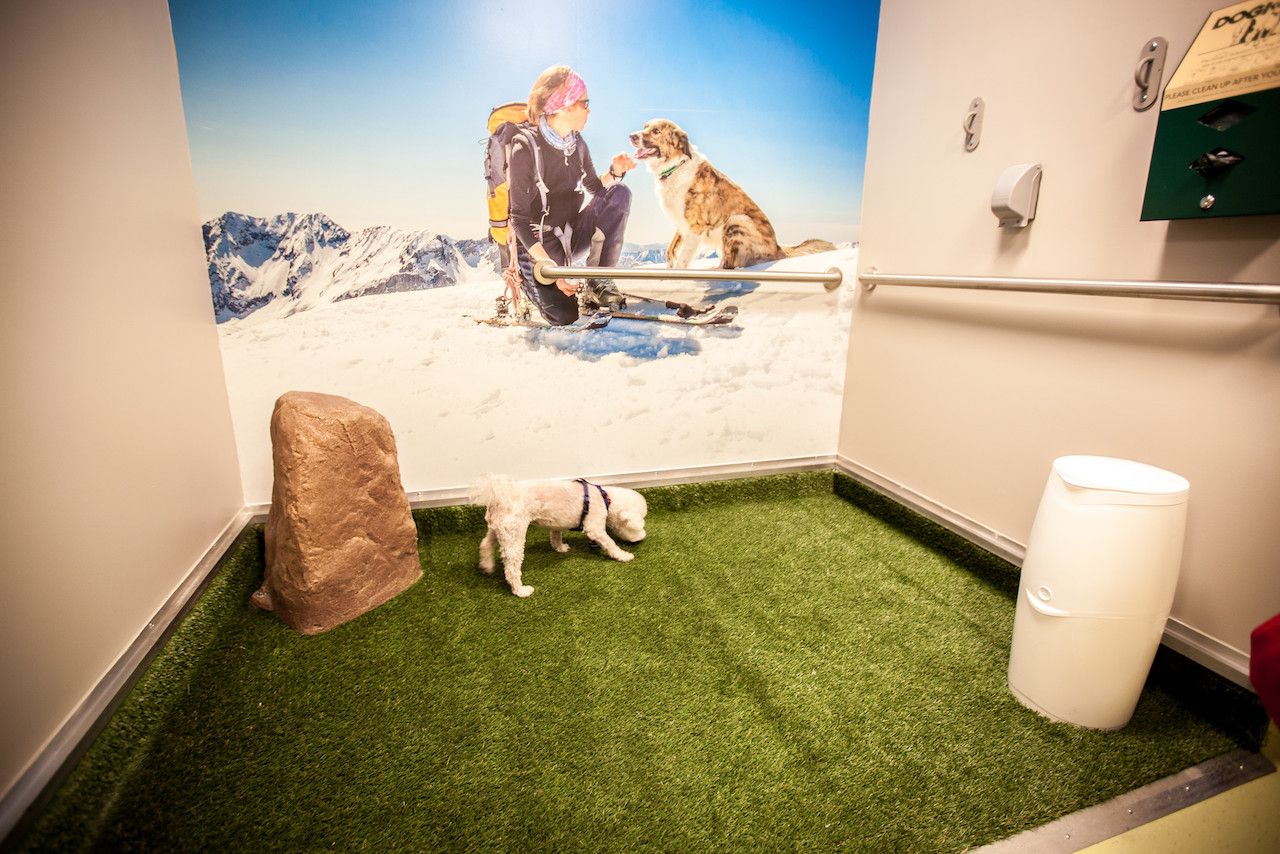 Denver brings a taste of the famous Colorado outdoors to its pet relief areas with large mountain-themed murals, faux grass, and even boulders. There are indoor relief stations in each concourse post-security and one outside of Jeppesen Terminal pre-security. But the real highlight, and what earned DIA its spot in the top 10, is its luxurious pet-boarding facility called Paradise 4 Paws. If your dog fancies a swim in a bone-shaped bath or needs a bit of personal attention (think obedience training, medical care, grooming, or massages), the 25,000-square-foot on-site pet resort is the place to hit for a day or overnight stay. 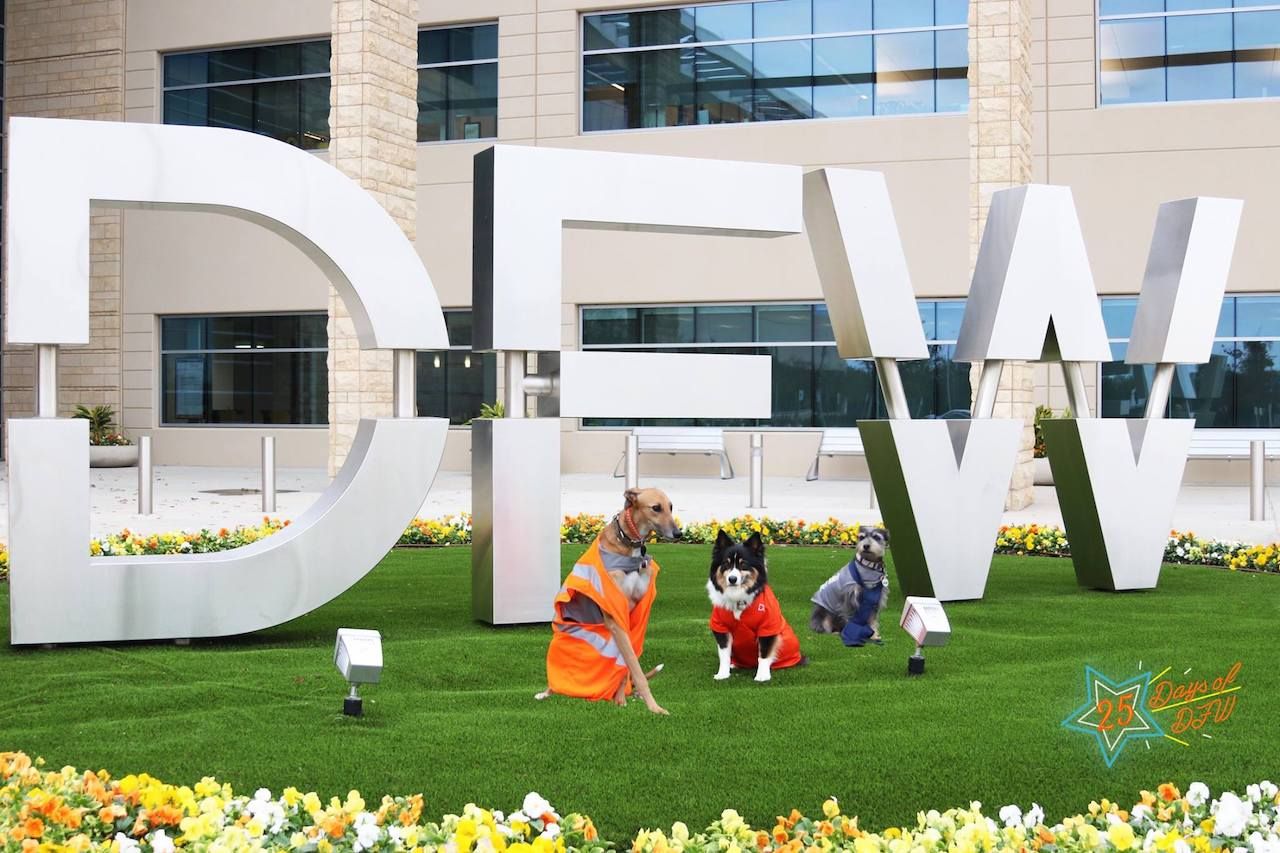 Dallas certainly isn’t slacking when it comes to providing pet amenities in its airports. The second Dallas entry on this list, this airport has a Paradise 4 Paws just like Denver’s, for whenever you need extended, around-the-clock care for your pet. There are also four designated pet relief areas beyond the security checkpoint, as well as four other areas for pet relief outside the entry doors on the lower level, pre-security.

PetsEverything You Need To Know About Your Rights for Flying With Pets
Tagged
Airports + Flying Pets United States
What did you think of this story?
Meh
Good
Awesome